“Our masterplan proposal – BiodiverCity – supports the Penang2030 vision with a clear focus on livability, on stimulating a socially and economically inclusive development, and on environmental sustainability for future generations,” explains BIG. “BiodiverCity will be a new sustainable, global destination where cultural, ecological and economic growth is secured and where people and nature co-exist in one of the most biodiverse places on the planet at the southern shore of Penang Island.”

Penang’s vast biodiversity spans various topographies and protected environments which in recent years have seen its coastal zones and natural habitats disrupted by urban developments. In contrast, BiodiverCity is conceived as an Urban Mosaic of three diverse islands, and a set of urban design guidelines for mixing programs, addressing pedestrian and mobility networks, building sustainably and harvesting resources. The three islands bring together mixed-use districts of 15,000 to 18,000 residents across 50 to 500 acres, and a continuous 50 to 100m buffer around each district, establishing habitat connectivity and supporting edge ecologies in reserves, parks, corridors and urban plazas. 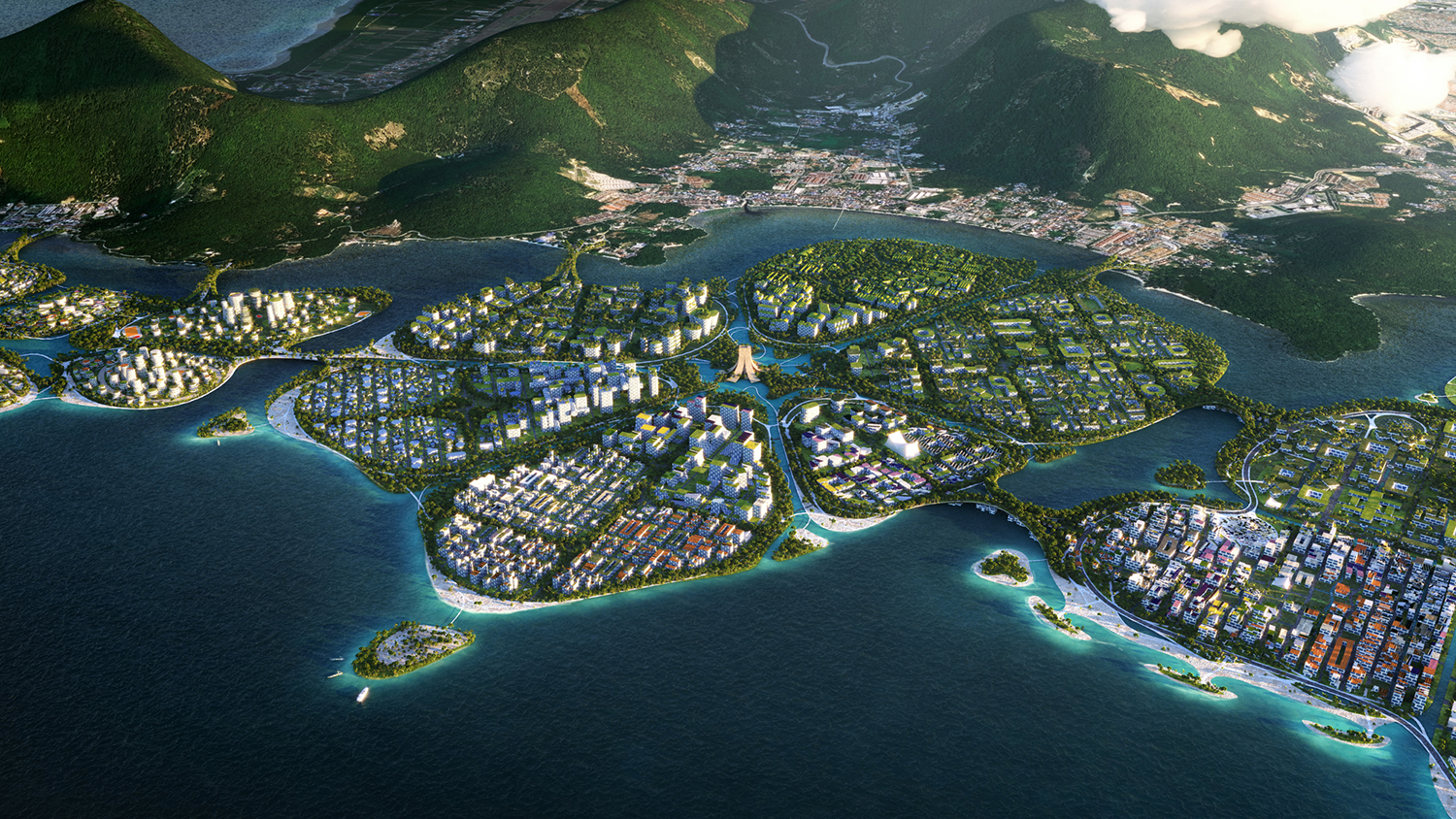 The Channels, BiodiverCity’s first island, is constructed in three complementary phases: in Phase 1, Active Destinations include a wave pool and technology park; in Phase 2, a Civic Heart establishes governance and research institutions in the area; and in Phase 3, a Cultural Coast builds upon the heritage and vibrant creative energy of Penang’s George Town to create a regional and international draw. As the heart of the district, the Channels’ 500-acre digital park includes spaces for research, development and local business opportunities. Malaysia’s newest public destination will be the future home for conferences, education centers and a family-oriented park where locals and guests can explore the world of technology, robotics and virtual reality. 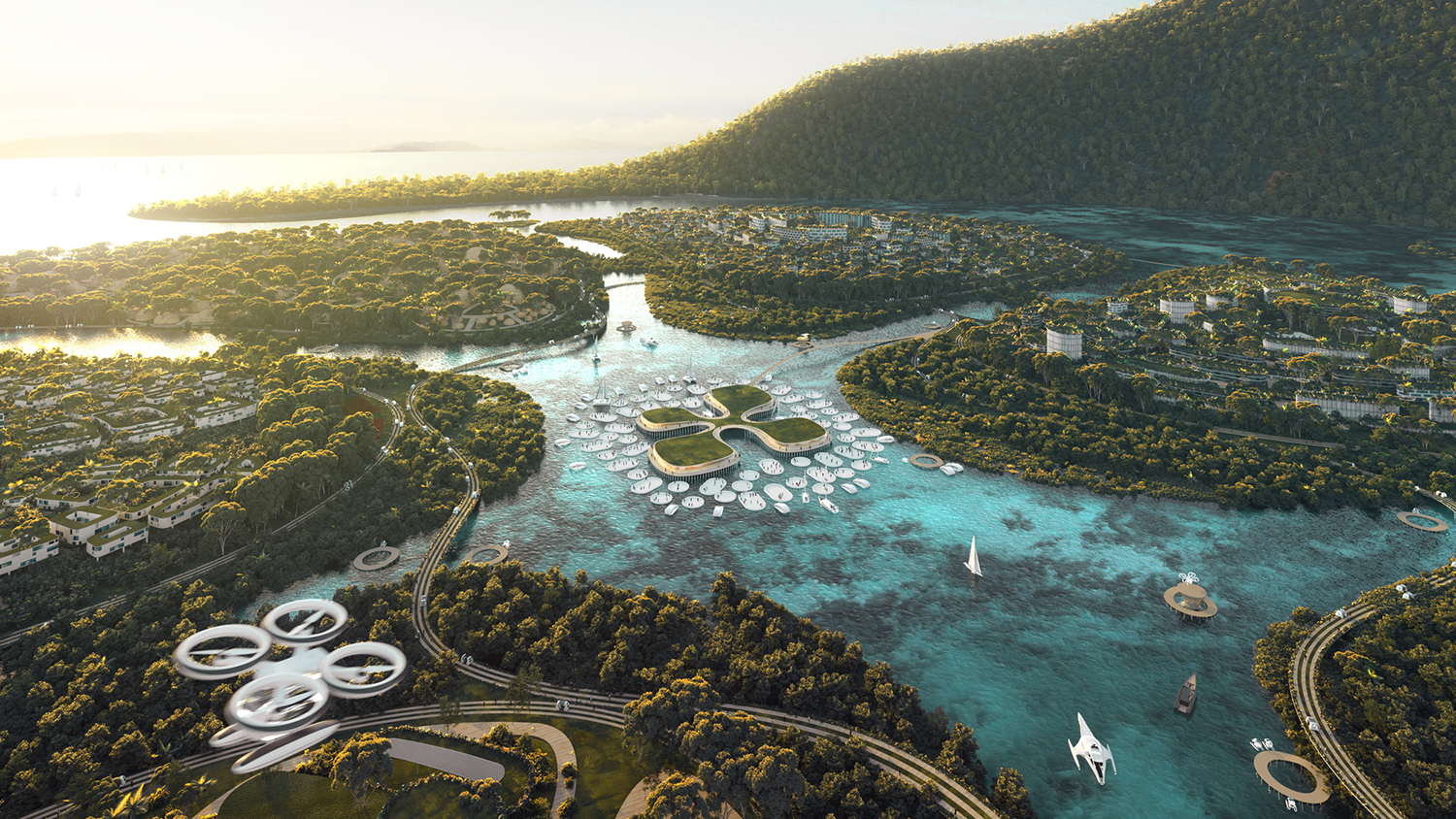 The Mangroves, BiodiverCity’s second and central island dedicated to businesses, is organized around a network of sheltered urban wetlands, creating suitable environments for its namesake Mangrove forests—an important natural infrastructure that doubles as effective powerhouses for sequestering more than four times as much carbon as a typical forest. At the center of the Mangroves, the Bamboo Beacon hosts meetings, conferences and major events—broadcasting the knowledge developed in BiodiverCity out to the world. In addition, civic amenities are distributed throughout the city to promote inclusive growth and participation in urban life. The buildings in BiodiverCity will be designed to perform efficiently and will to a large extent be constructed by low-carbon materials such as bamboo and Malaysian timber in combination with green concrete, a sustainable alternative comprised of industrial waste and recycled materials. By encouraging green roofs, facades, public and private open spaces, the islands can form a nearly continuous habitat mosaic feeding back into the forests, beaches, riparian zones and estuaries at the island’s edges. 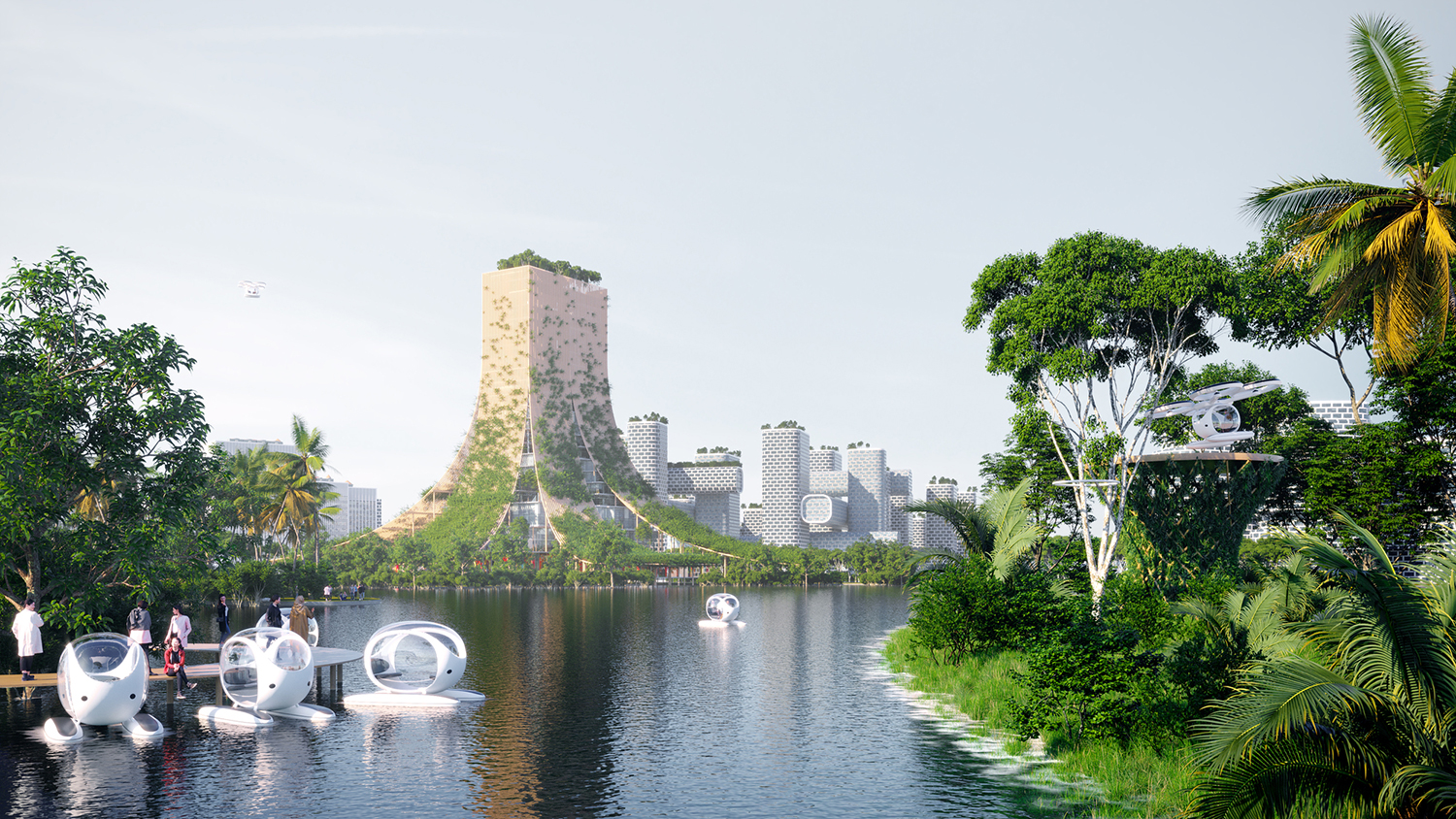 The Laguna, BiodiverCity’s westernmost island, is an oasis for ecological living, organized around a central marina. Eight smaller islands form a miniature archipelago, where floating, stilted and terraced housing takes advantage of the natural setting of Tanjung Gertak Sanggul, and where fisherman landing points can easily access the open waters by navigating each of the island’s waterways. Meanwhile, newly established marine habitats support biodiversity underwater by providing spawning grounds for native species, and recreational points and hatcheries support the local communities along Penang’s southern coast. A web of ecological corridors connects forest reserves to coastal beaches while supporting habitats and communities across the islands. Within human-populated areas, animals are given safe passage through the continuous canopy and waterways, and within natural habitats, people can safely access elevated boardwalks. 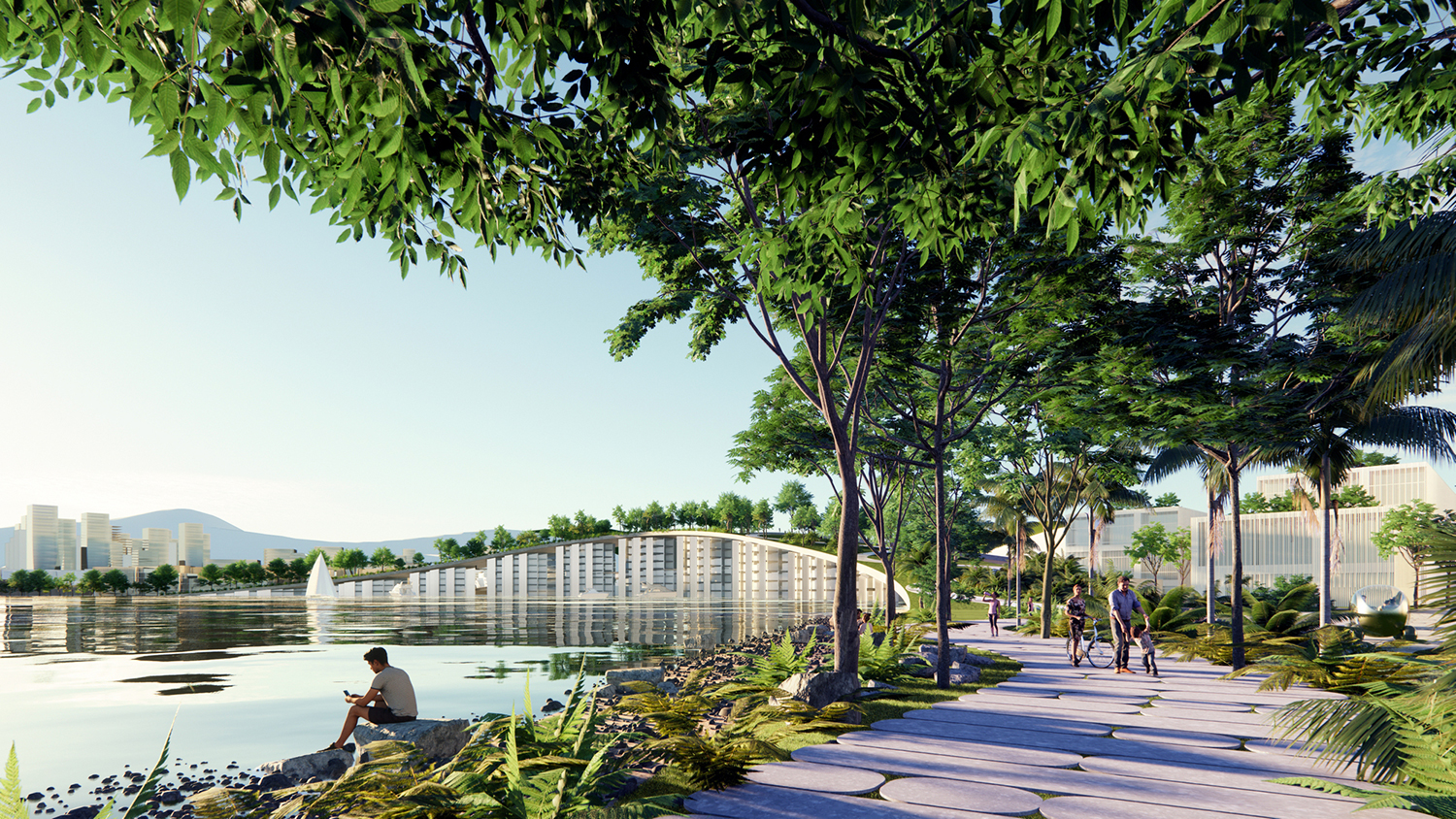 BiodiverCity supports a water, air and land-based autonomous public transportation network, aiming for a car-free environment where streets serve as a safe and welcoming thoroughfare for bikers and pedestrian. Districts are efficiently connected below platforms to increase the efficiency of goods, services and regional mobility, while maximizing pedestrian safety throughout the public realm. 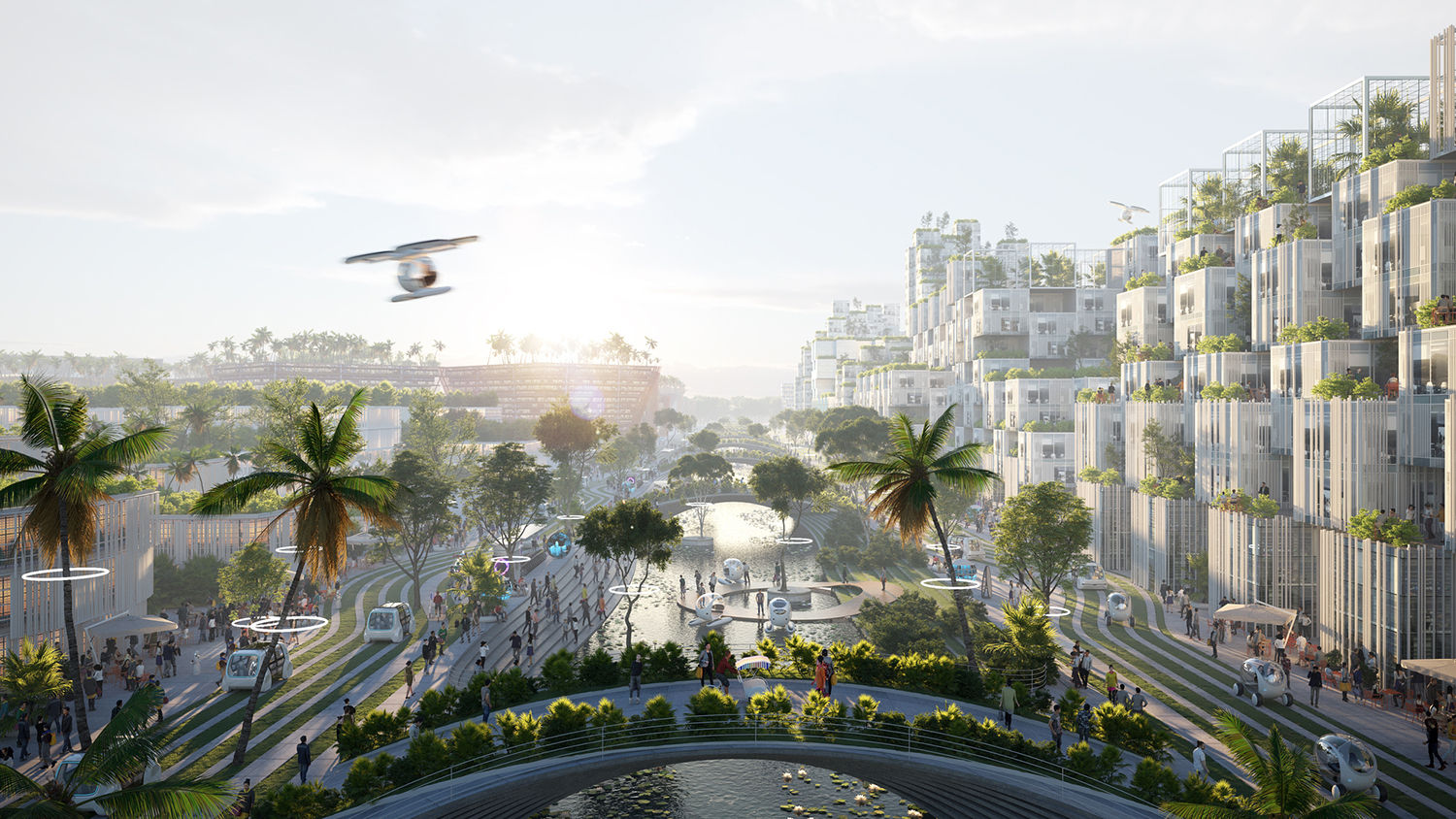 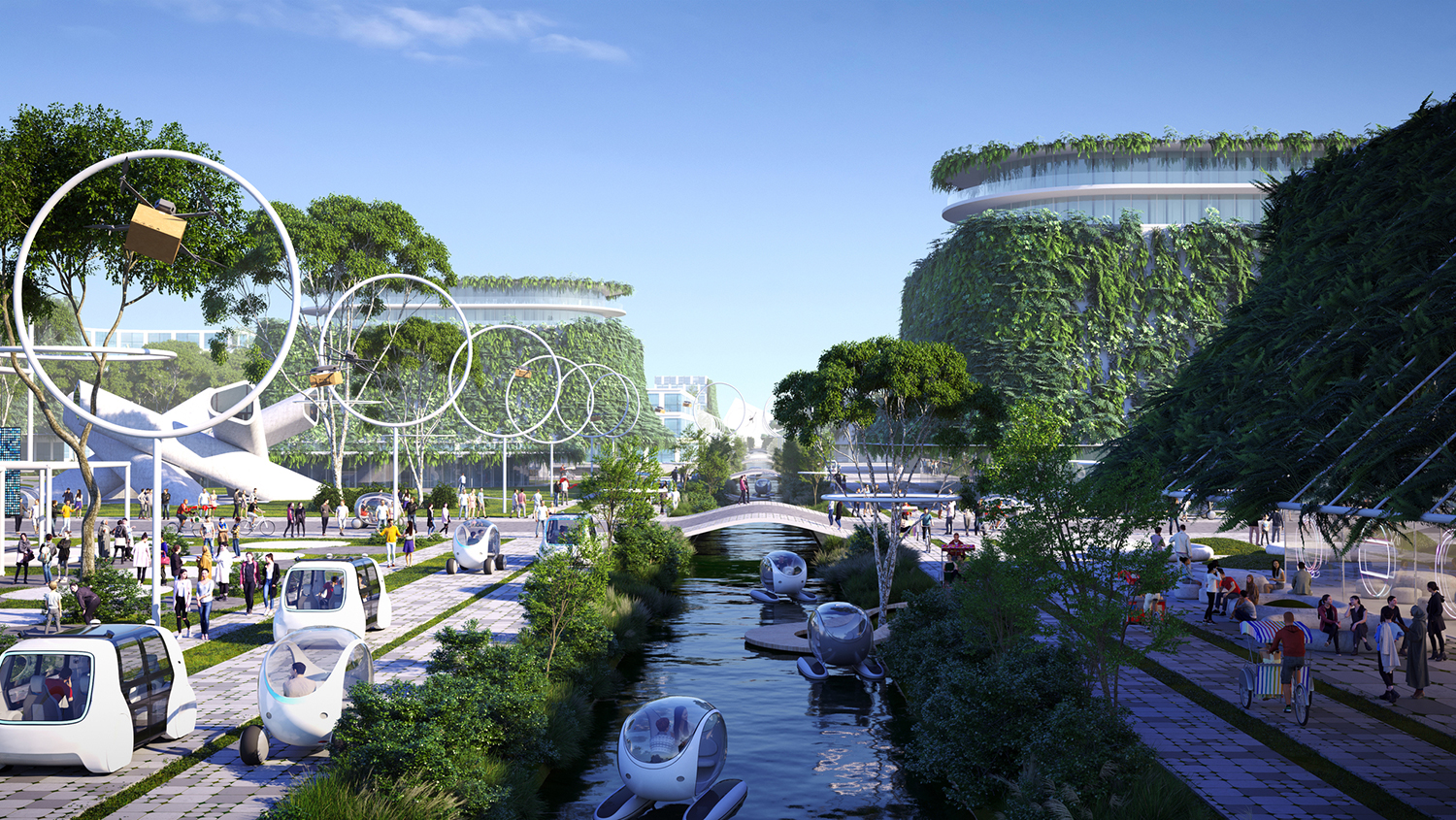 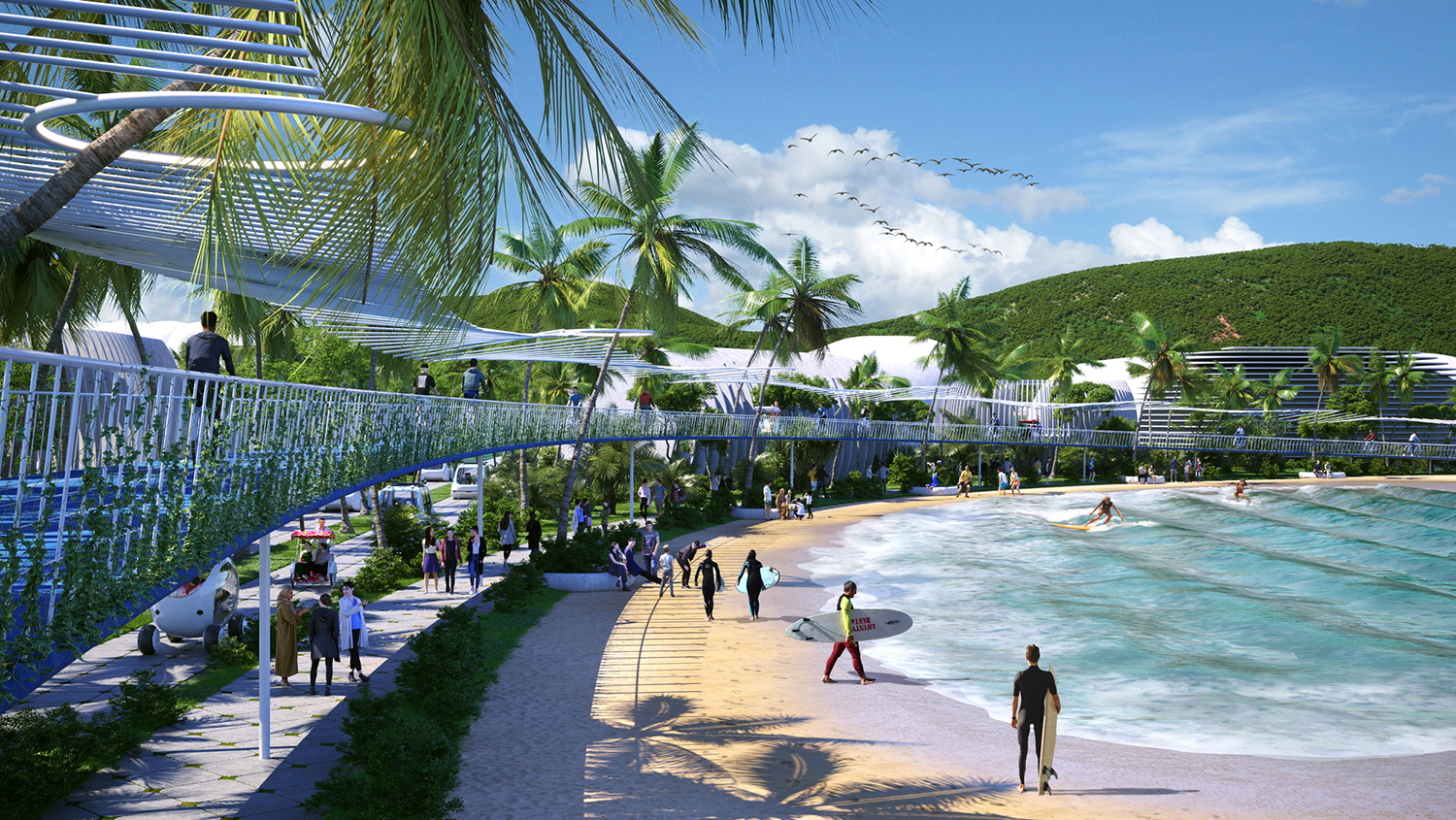 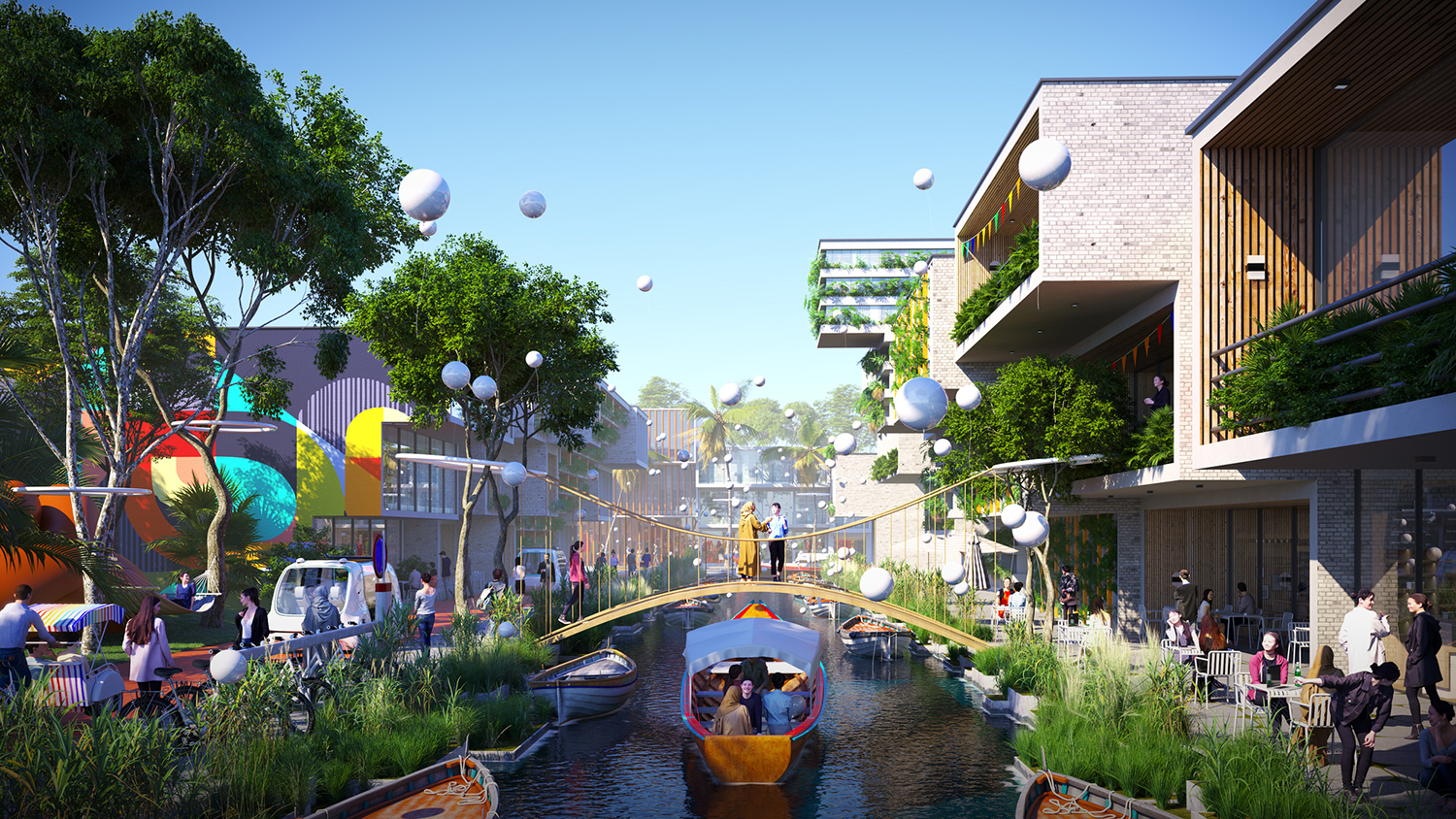 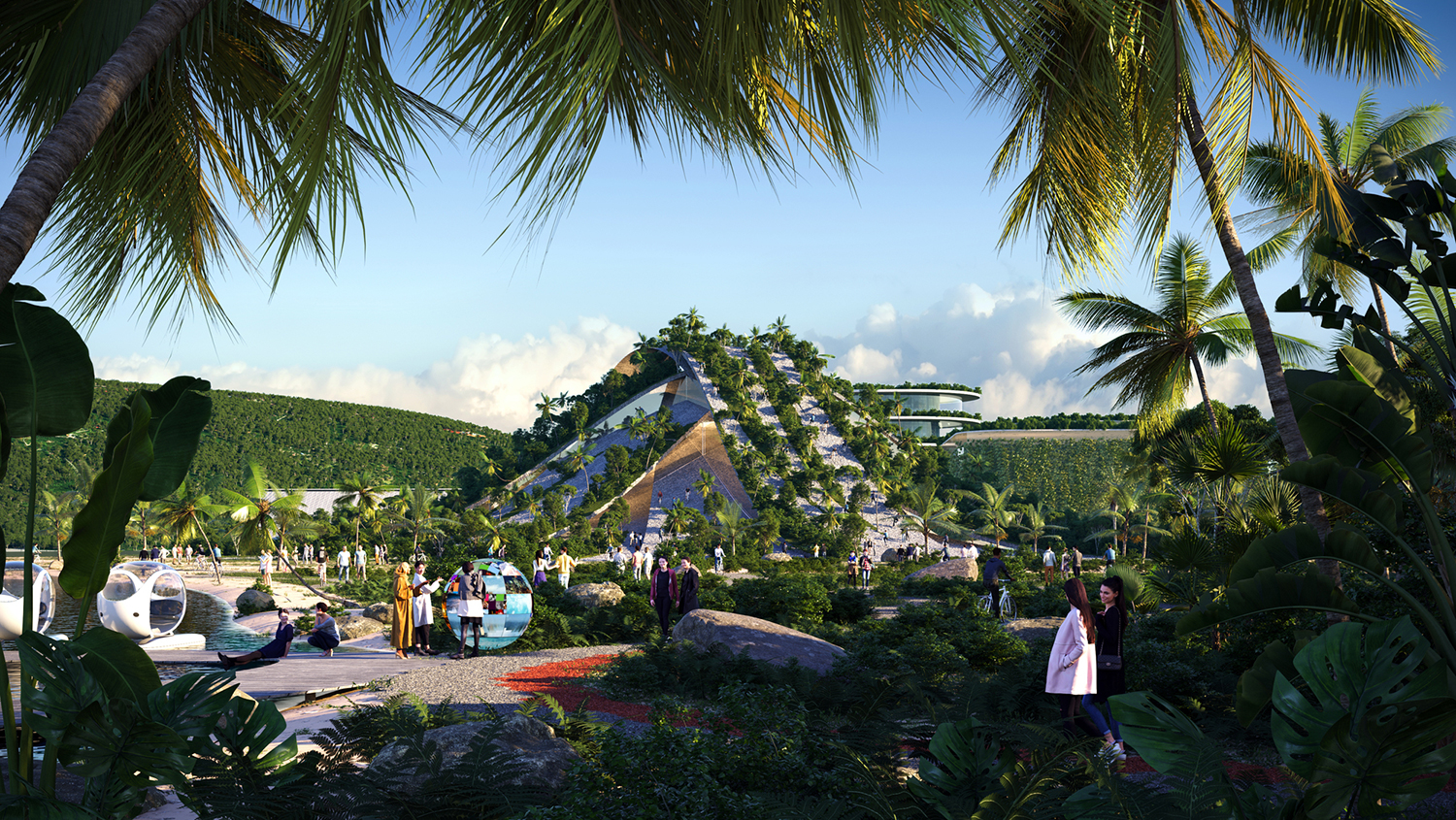 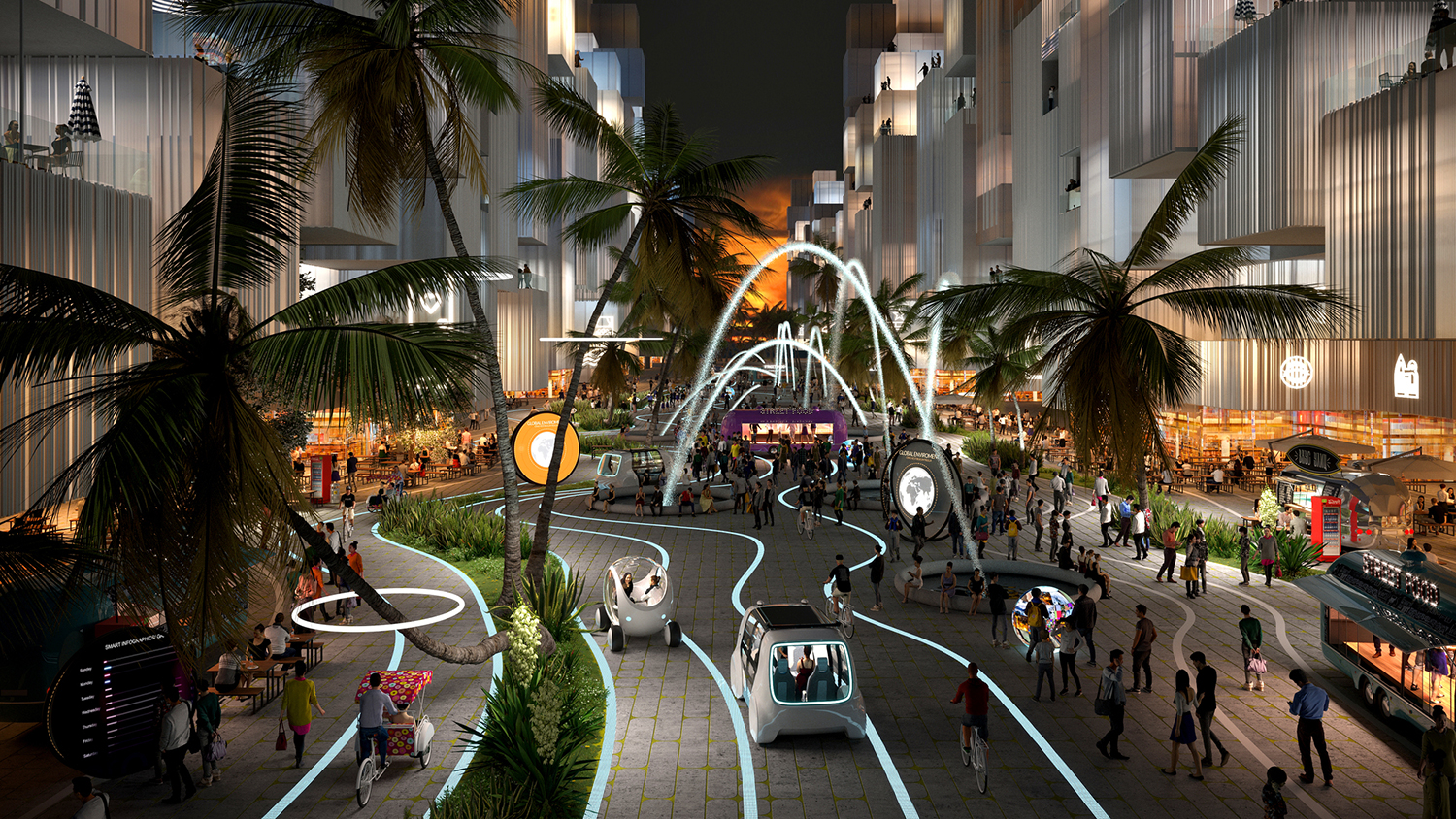 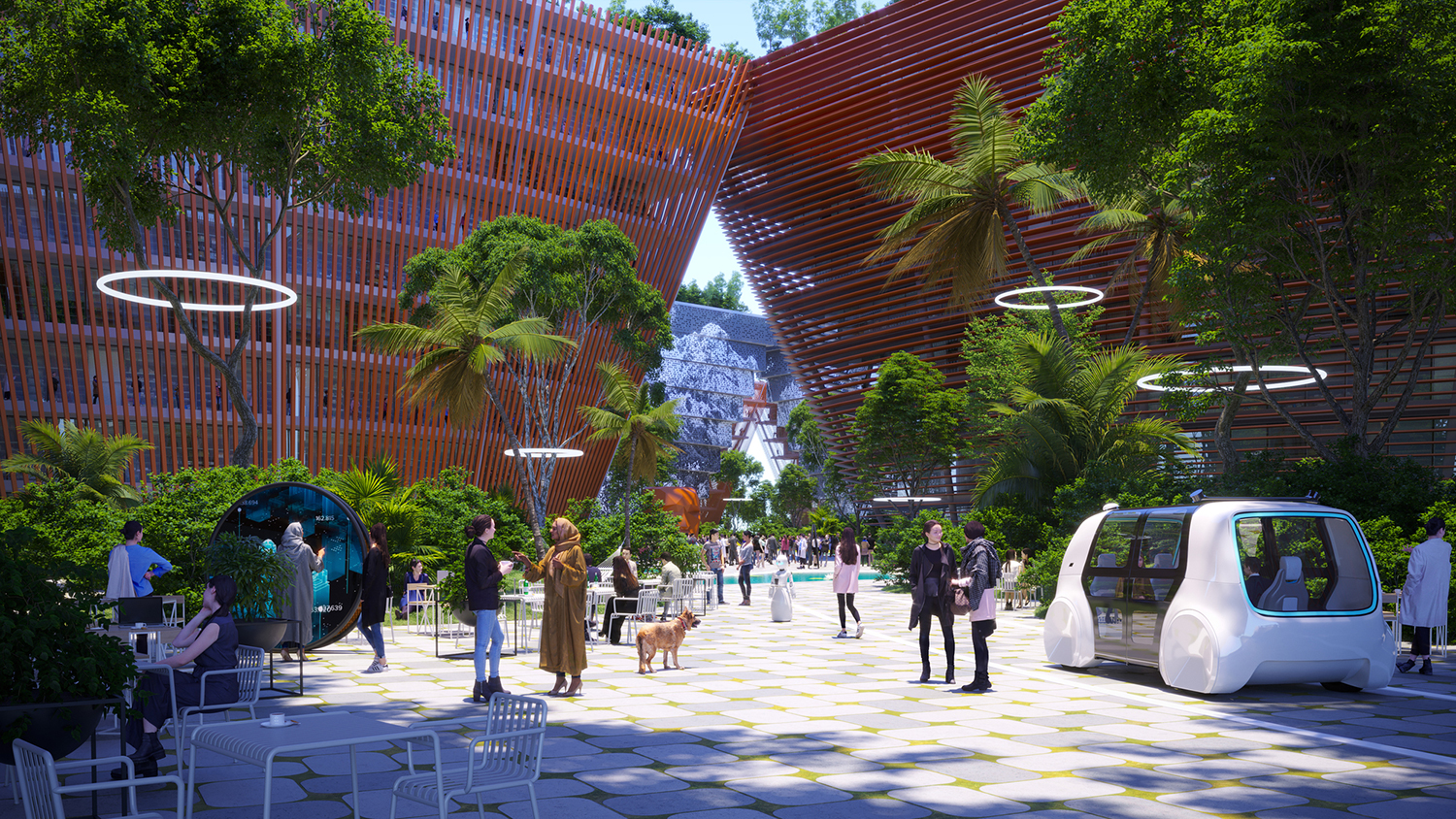 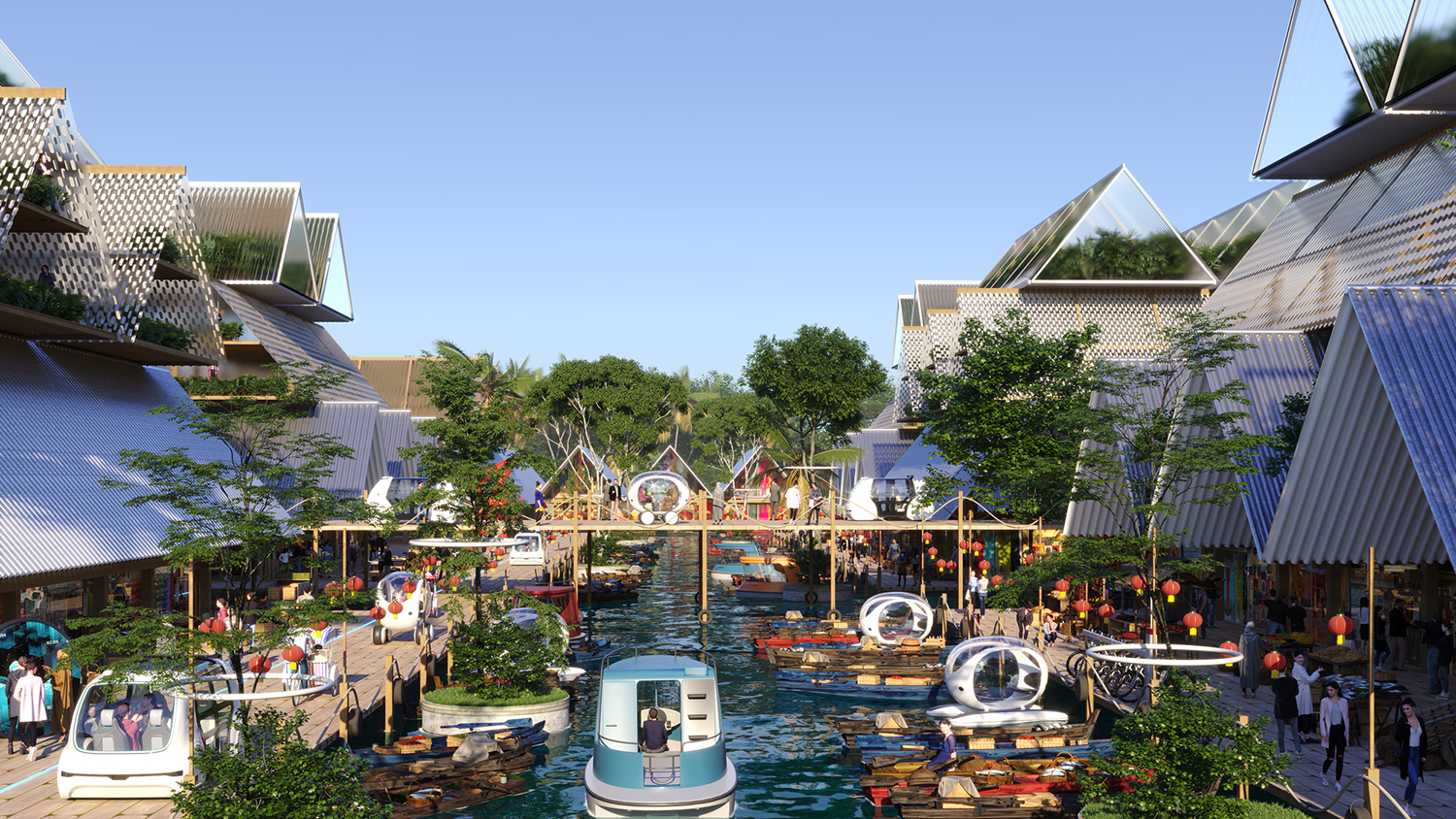 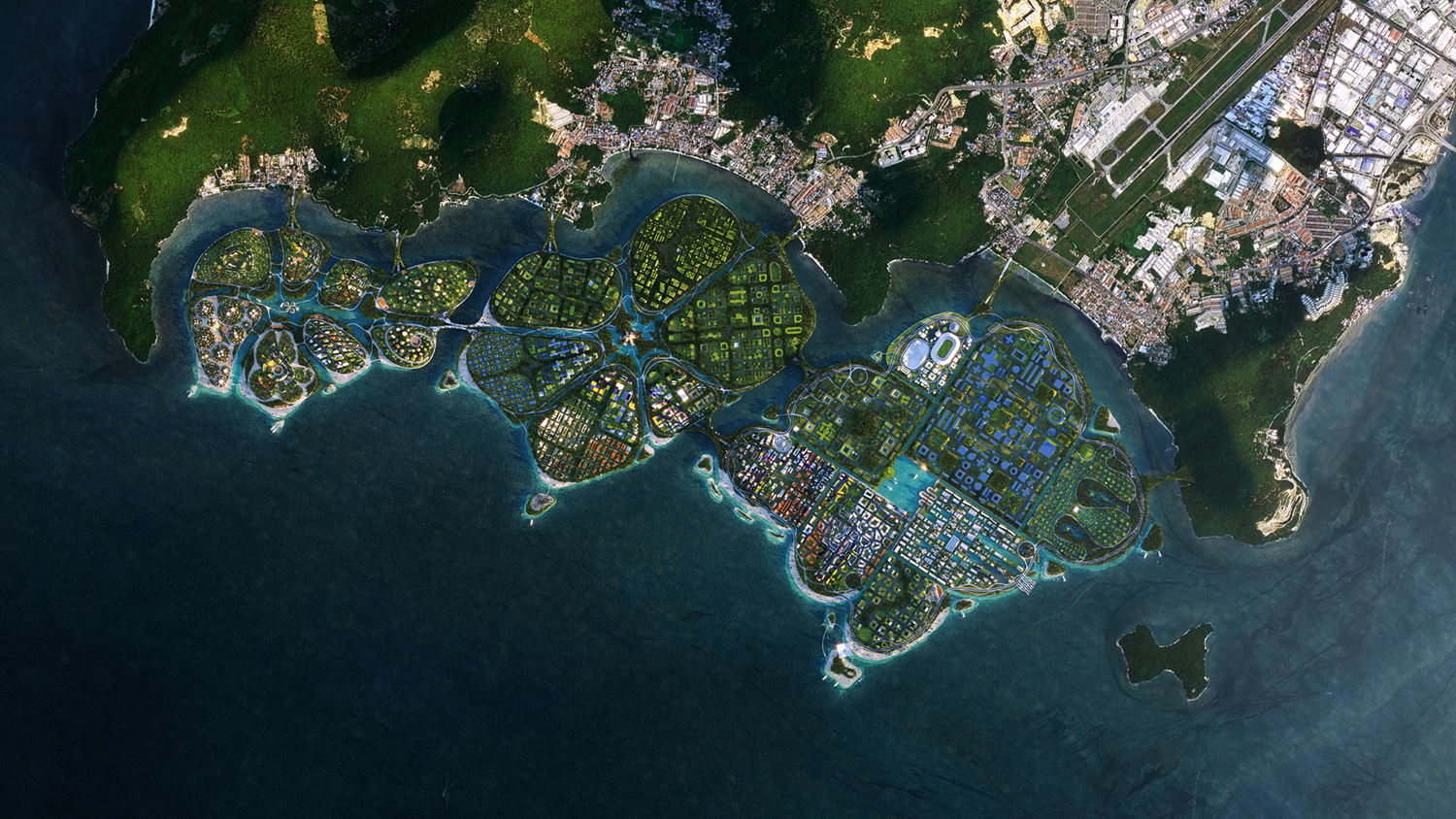