When the young owner couple returned to the Czech Republic from Canada, they both wanted to return to the Prague social life. A house that will allow the combination of work and living, next to each other but at the same time separated, had to meet many demands. It’s built for living, which is matched by the disposition, chosen materials and the integration of technologies into one autonomous system with artificial intelligence. 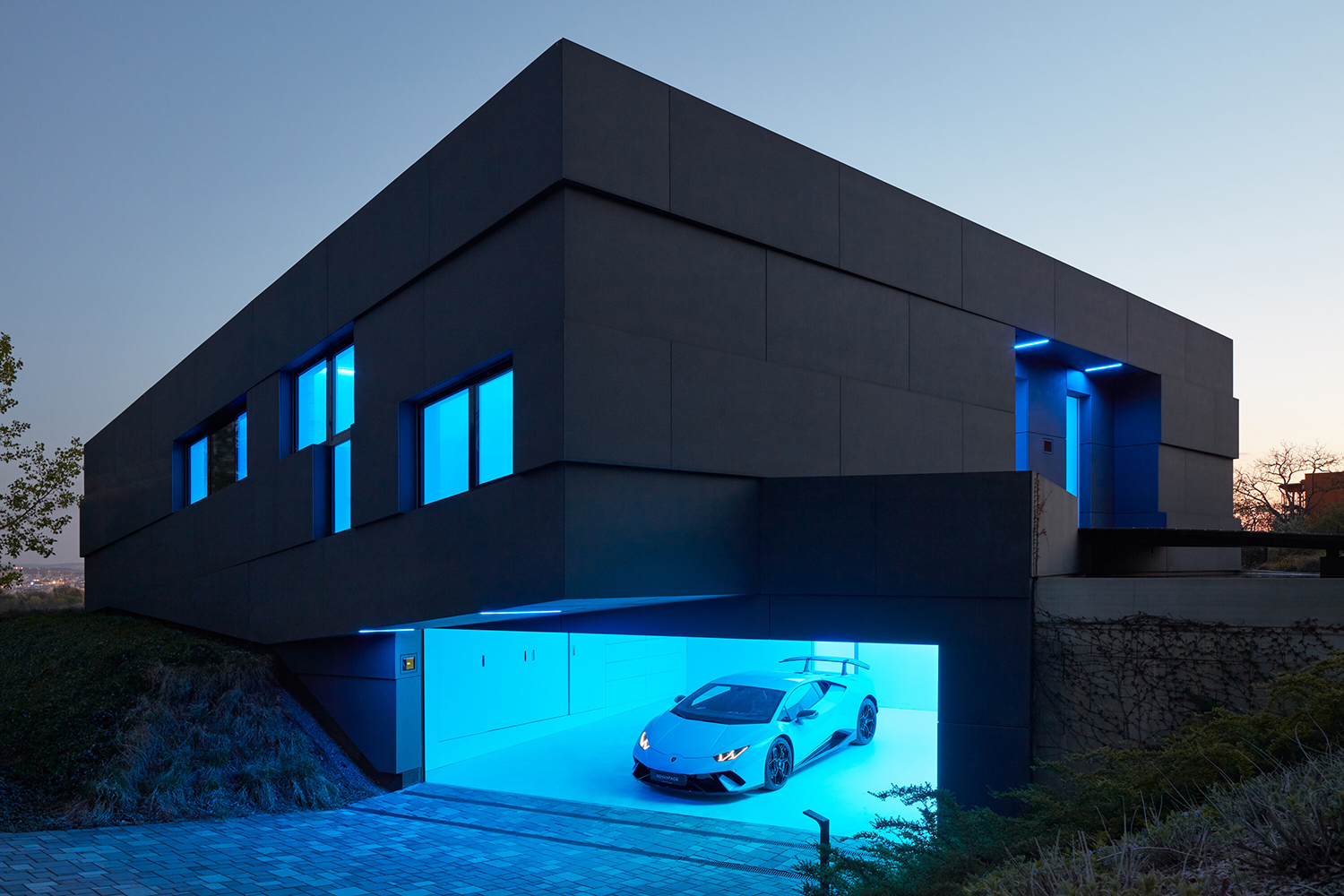 The house is situated on the edge of the Trója hillside above a nature reserve with a one of a kind view of Prague. Aside from a wide range of birds, occasionally a deer or a wild boar will wander into the overgrown garden.

The panorama view starts with the green star of the Dejvice hotel International and spreads all the way to the bubble of the Libeň gasholder. The view is an enjoyed landmark for the surrounding houses as well, which is why Villa Sophia is the smallest in height as possible at the street side, so it doesn’t block the view. 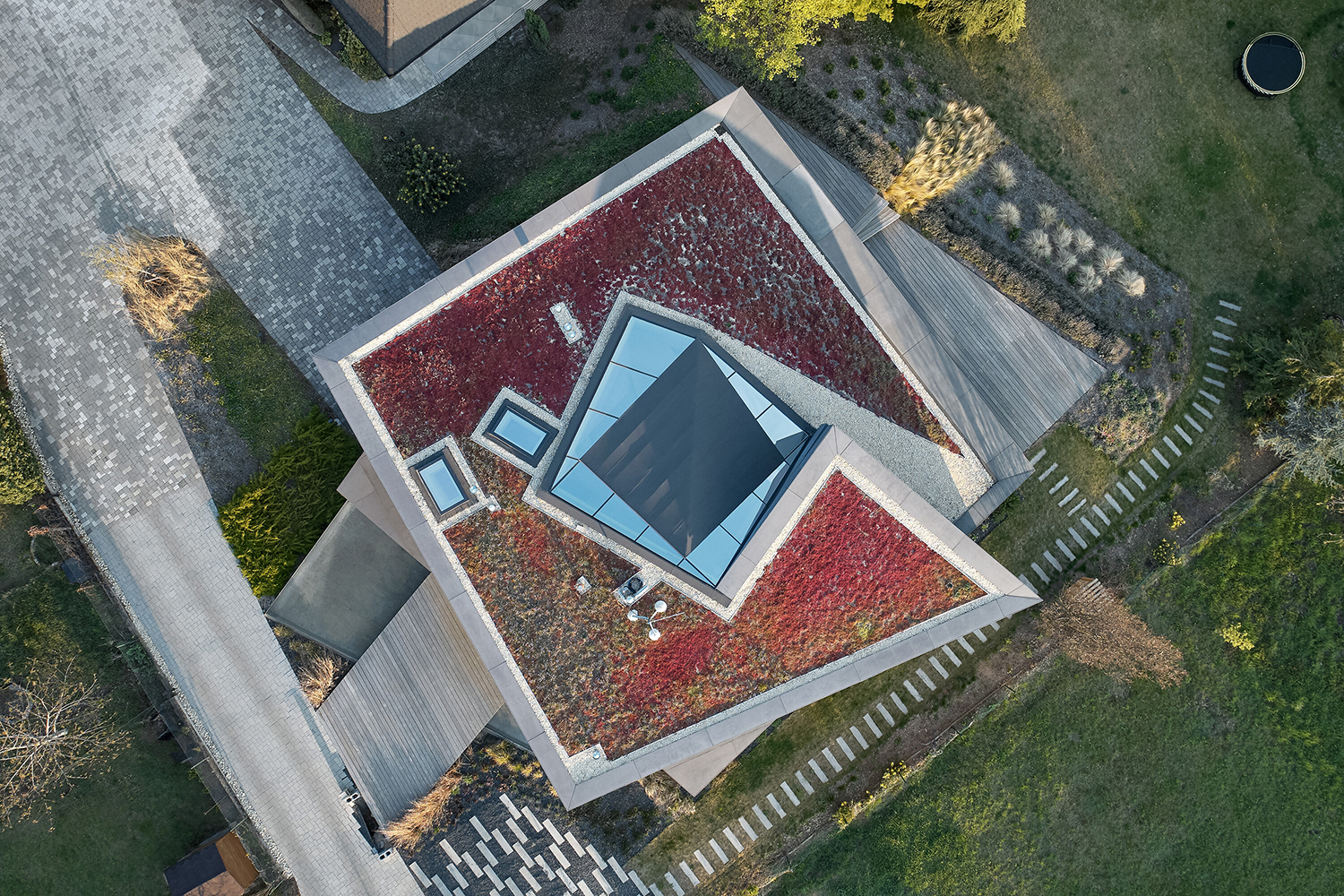 The descending terrain allows for the house to open up to the south and offer three basic composed views. From the living area into the garden, from the bedroom into the treetops and from the office we see the panorama of the city.

The double entry on the north blind facade, separate into the living and working spaces, is mainly intended for visitors. The home is opened to the owners through the garage from which the house’s spatial spiral begins. The garage is therefore a space of equal importance to the rest of the house and practically serves as an entrance hall. In the spirit of Paladian villas, the square footprint is divided into 9 sections that ascend in a spiral up the hillside and end with the most public part of the house, the work space. 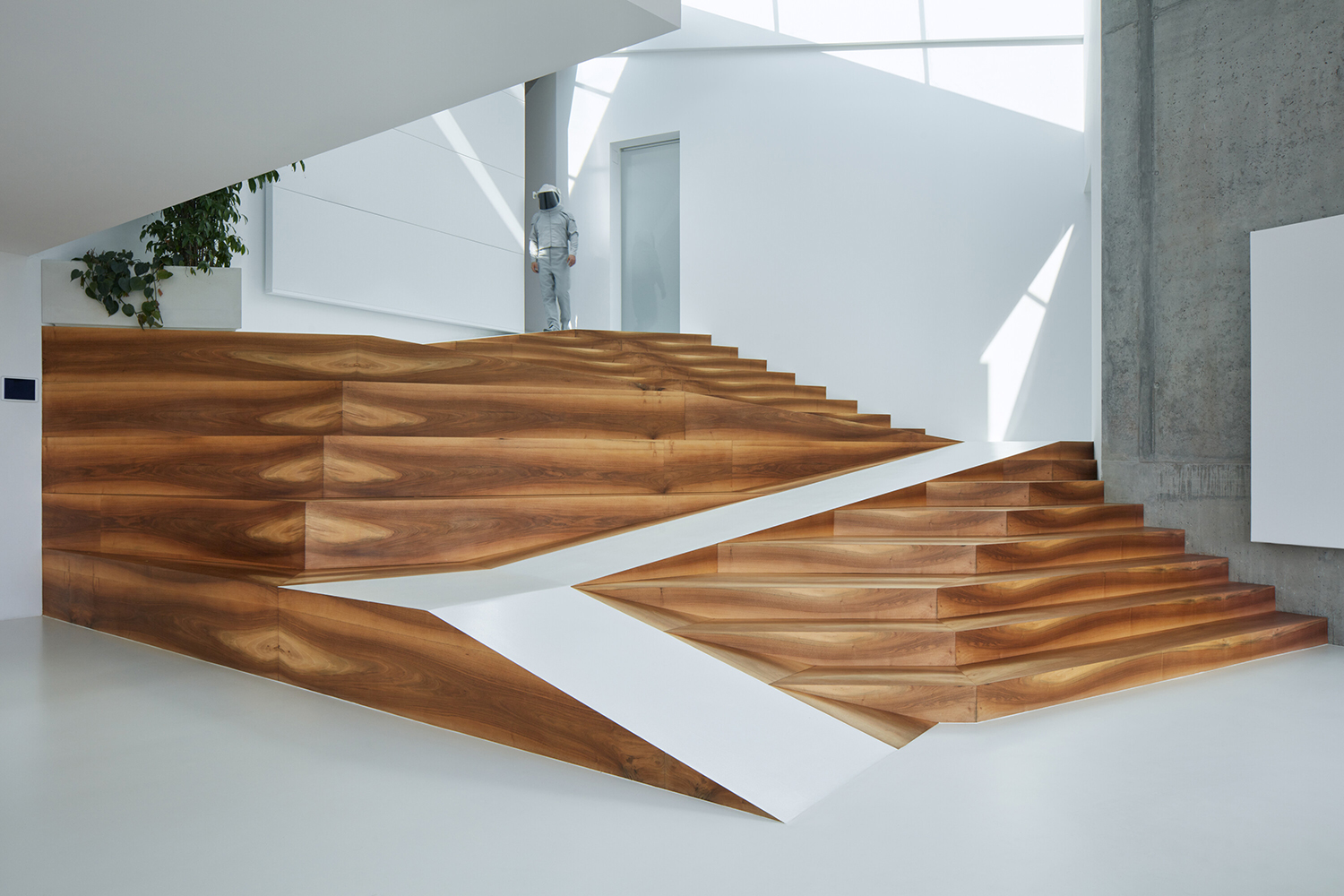 The main living space is accessible at garden level where then through the central staircase hallway we can gradually access the upper parts of the building. The entry for the resident and the visitor are antagonistic. It allows a different experience of the space or the usage of the stairway slope by descending it or in contrast, climbing it, all accordingly to the opposing ends of the spiral. The stairway is criss-crossed by a barrier-free ramp that again highlights the whole function of the house as a whole-life space for living, as was the client’s commission. It helps develop body movement in the early stages of life and makes it easier at its dawn. 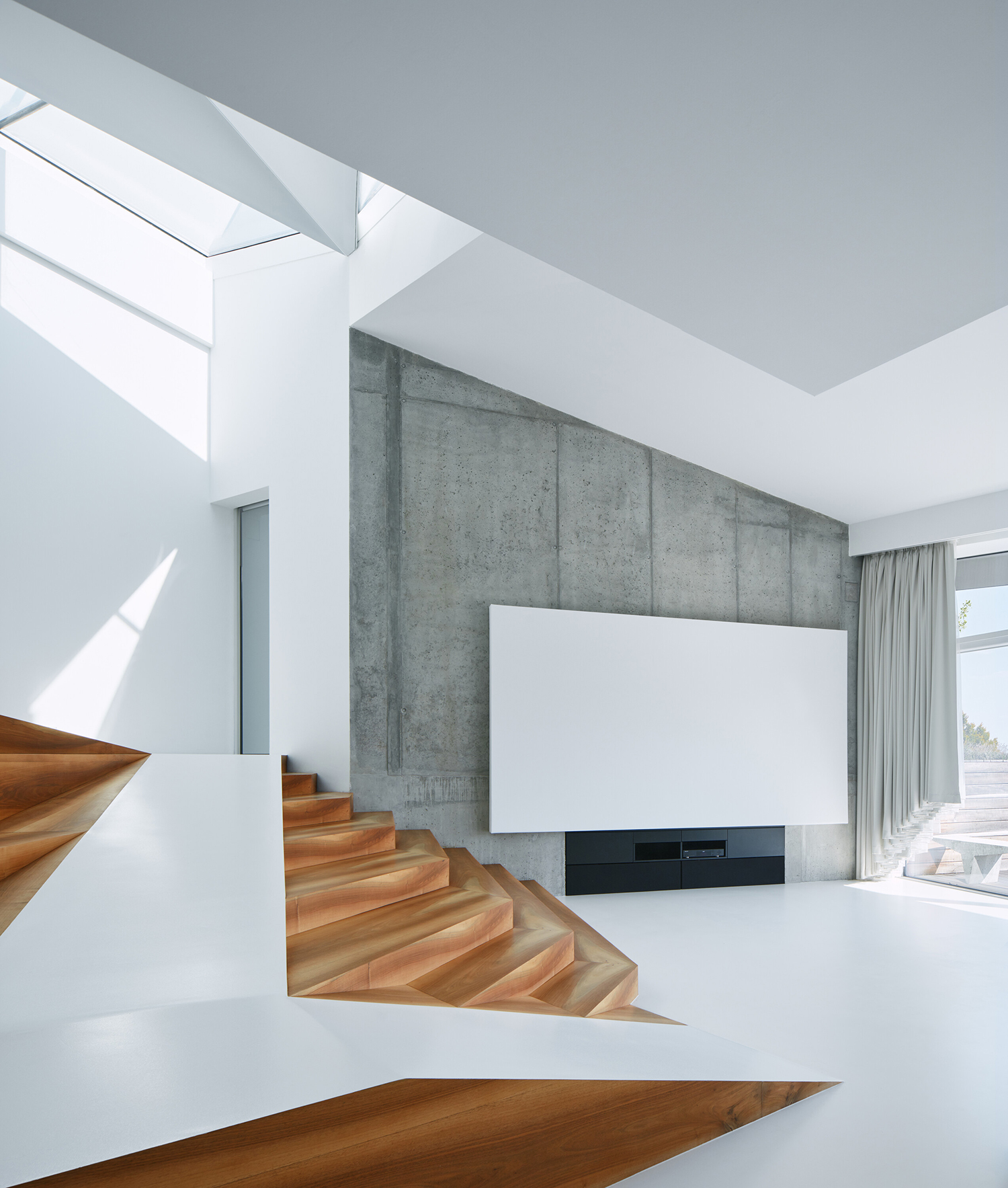 Many of the structural and material choices were motivated by the emphasis on sustainability, permanency, durability and haptic stability of the building. What can be once resolved shouldn’t be re-opened and waste more time and energy. Specialists from ČVUT were continually integrated in the preparations and process of construction itself. Material samples were tested for strength, elasticity and chemical stability and permanence. The building monolith was cast exactly so the windows would fit into the articulated facade that rotates around the house and connects its lowest and highest points. 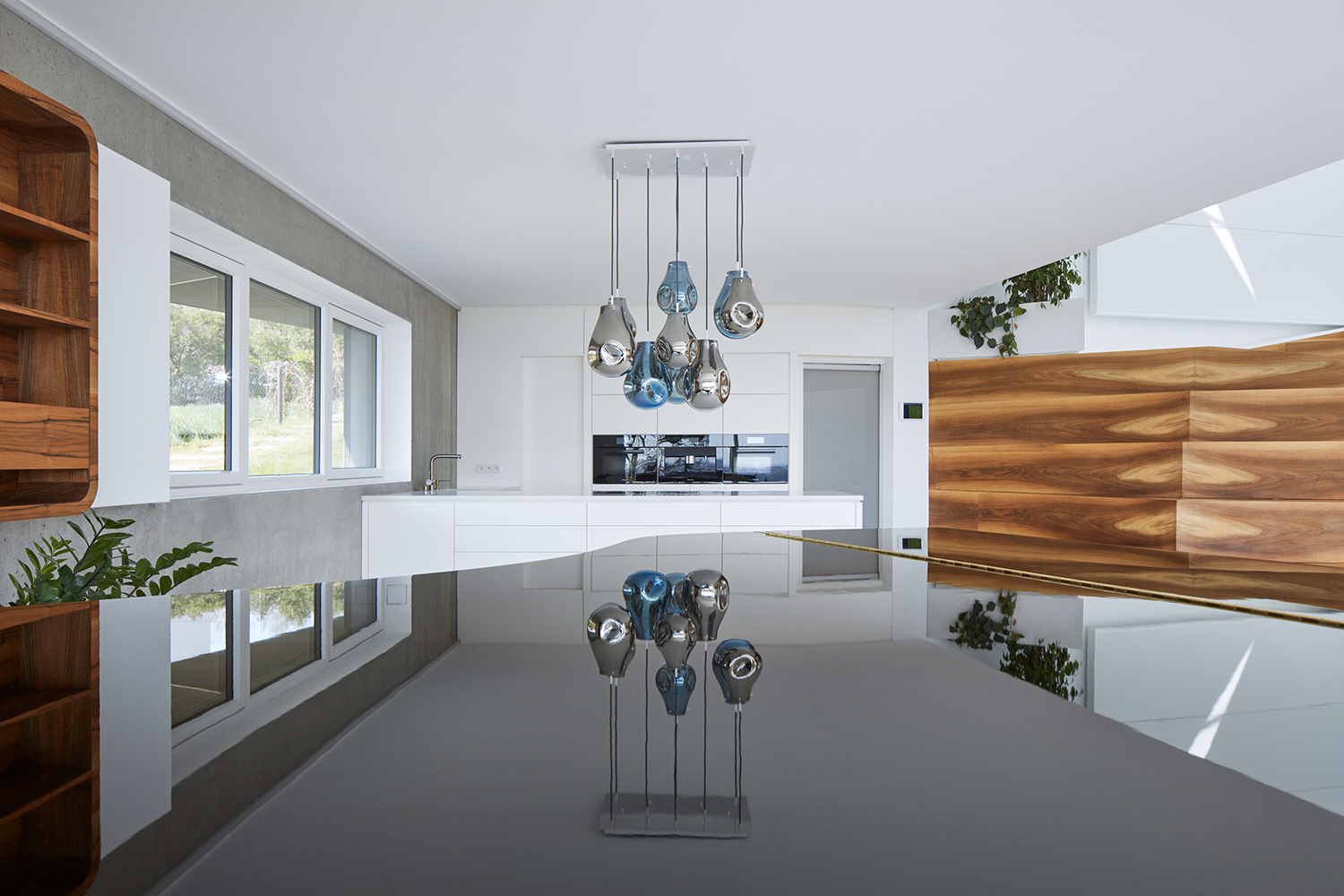 The client’s ambition – a culturologist and computer scientist – was a functional home without compromises which is matched by their opinion on the integration and control of technologies. The user’s view of integration with the environment however doesn’t meet with the reality and conventional processes in civil engineering. Thanks to the integration platform of the sysloop system and artificial intelligence by EMPYREUM Information Technologies, the age-old limitations could be surmounted. The system allows the connection of hard construction technologies, soft non-structured data and the ever-changing context of the web. The unique amount of interconnection of values and technology opens countless options and opportunities. 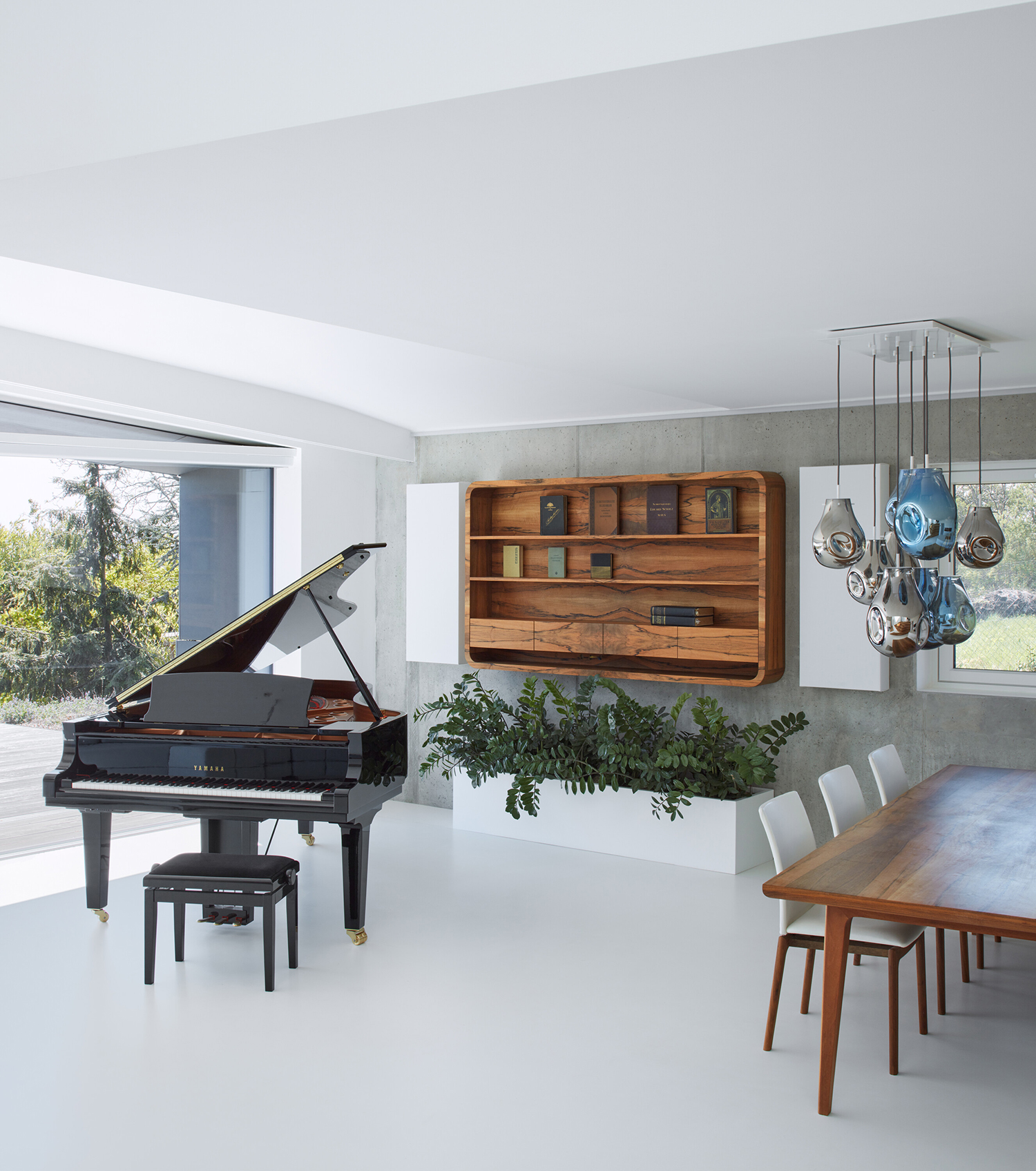 All the layers of the house are designed with an accent on generality. For example all the lights in the house are manageable in the full specter of light (RGBW), so the house can slowly eliminate the blue component for good sleep. Doors move on their own on linear magnets but also serve as an equal participant in natural ventilation. In the concert wing, the house can accompany the residents’ musical performance, play any piece itself or even generate melodies thanks to its own artificial intelligence. And if it were to be very cold, you can even use the oven for additional heating. The house offers but doesn’t pressure the active usage of this sort of control. It learns to optimally accommodate often self-opposing needs, takes externalities into consideration, doesn’t contradict technological potential or sustainability. 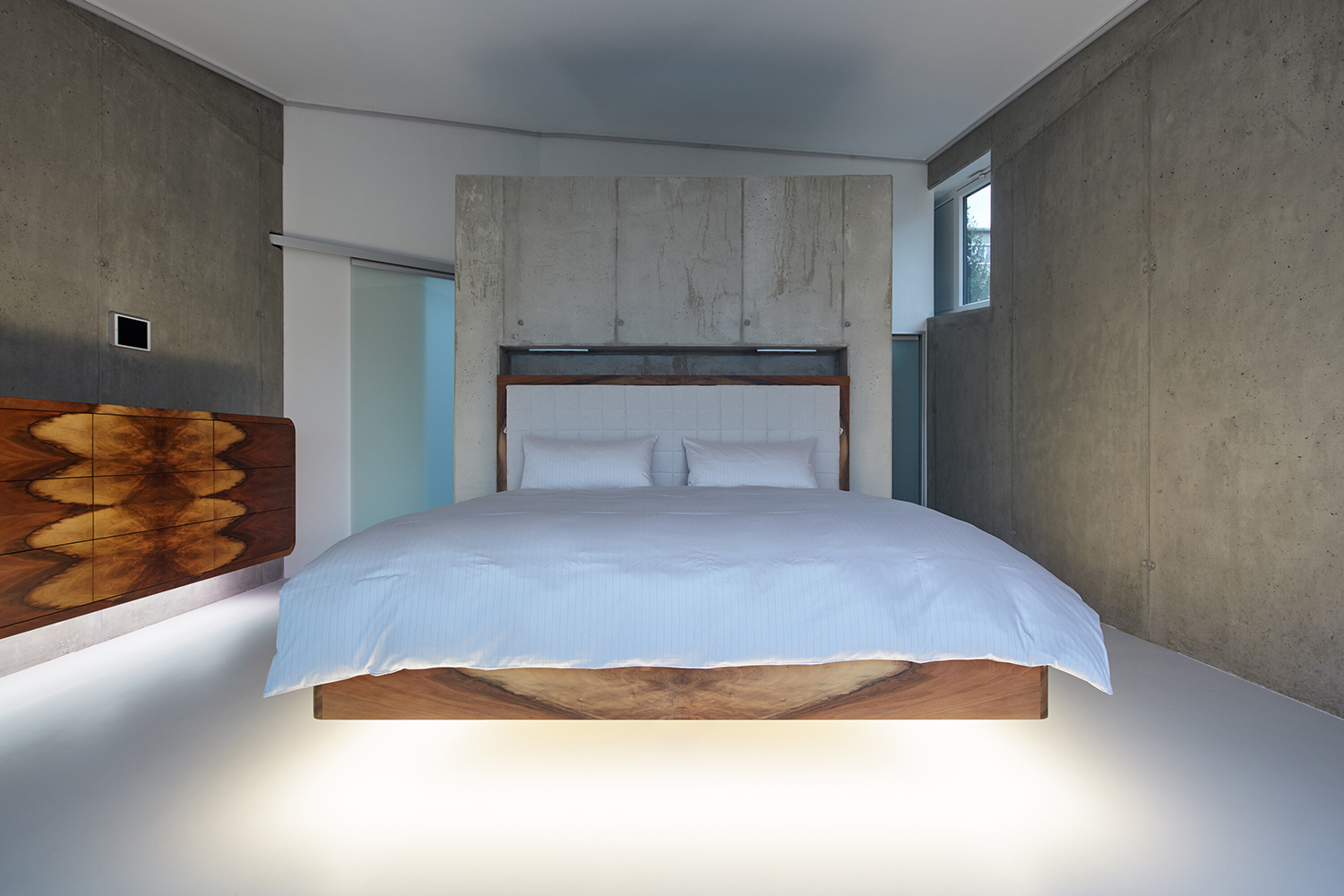 The house is exposed from above as well and therefore the roof blooms with many colors through-out the year. The green roof contributes not only practically to the energetic balance of the building, but also aesthetically. The ornament of an unfolding star seeps through into the shapes of the terraces around the house as well, and dissolves into the garden. 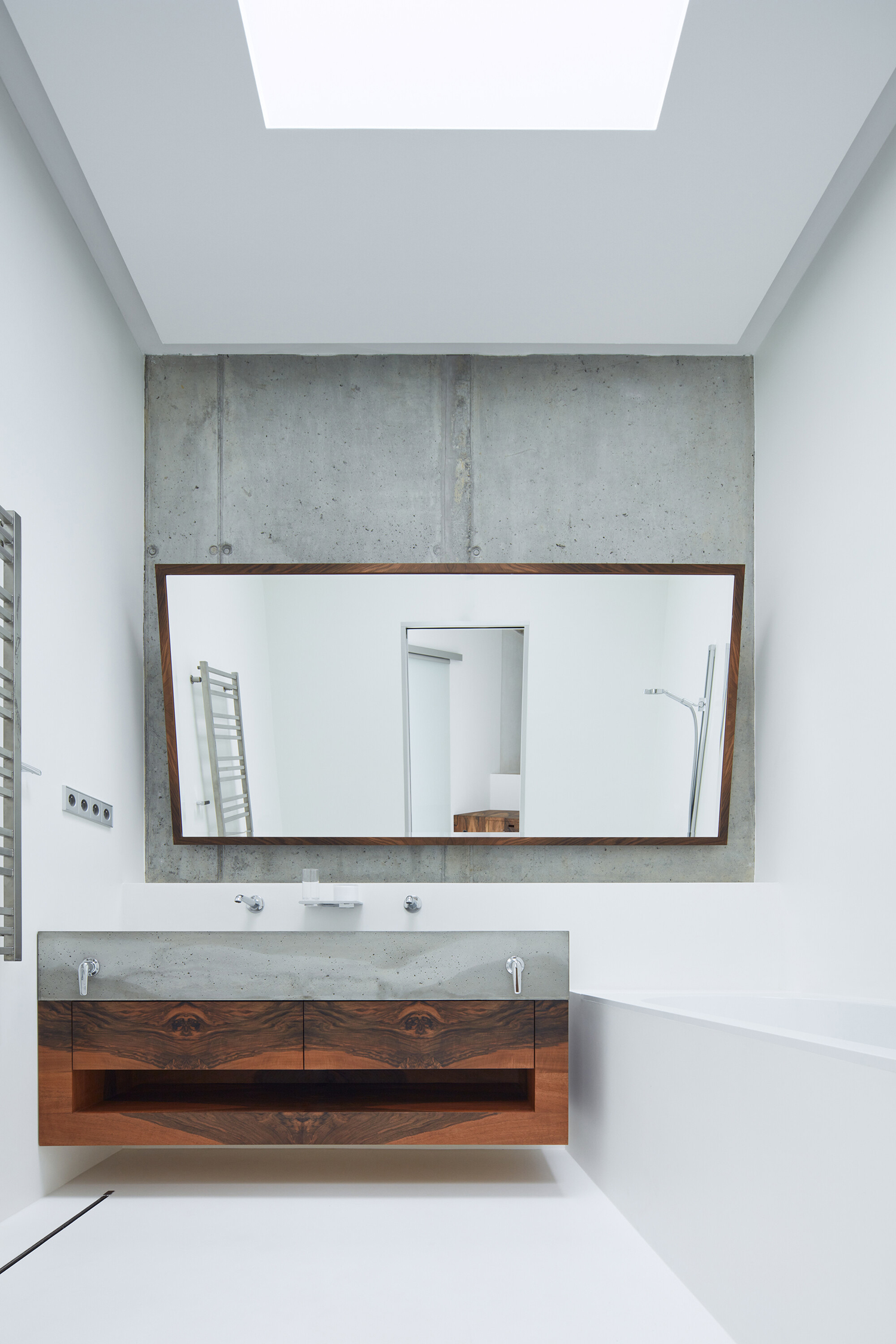 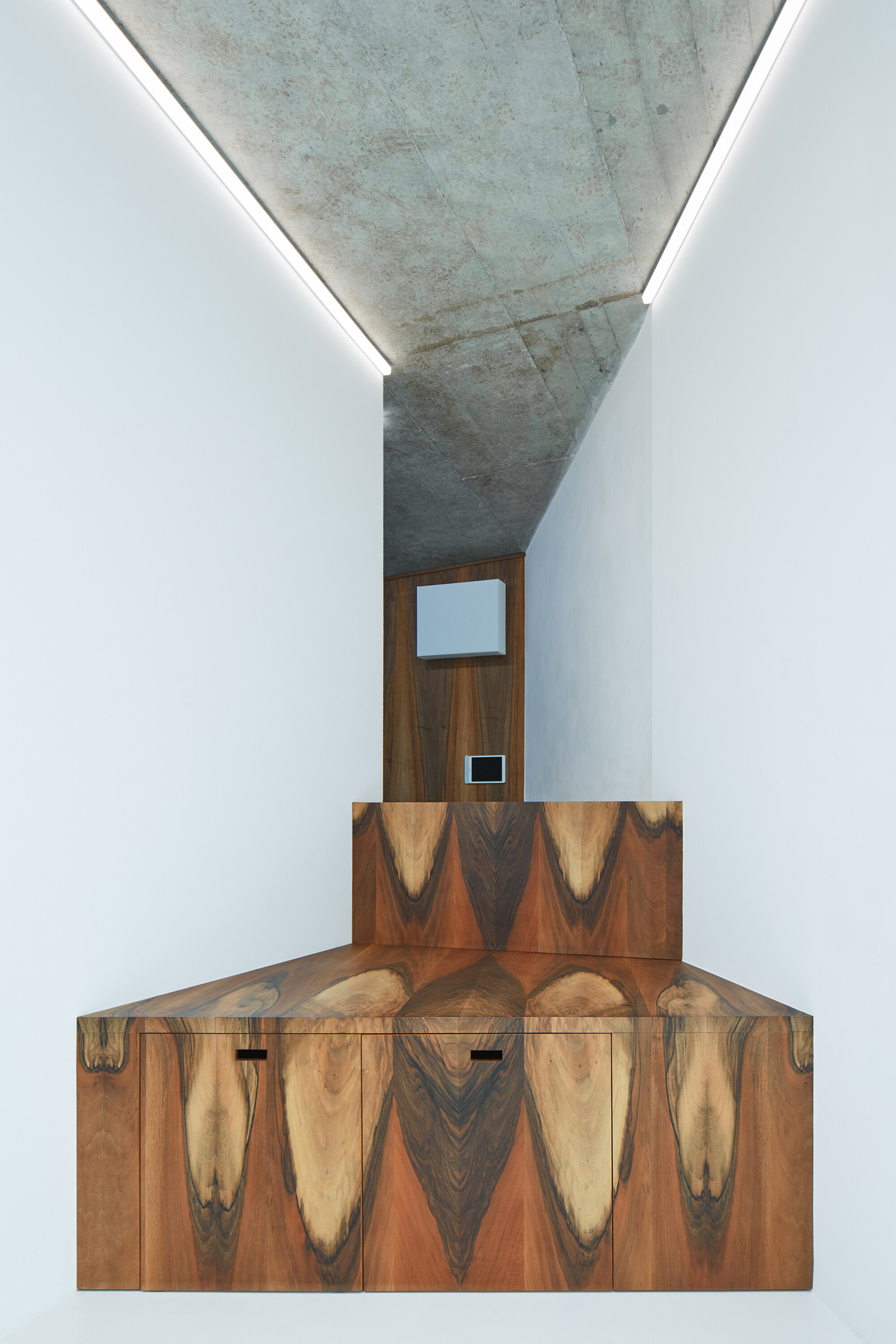 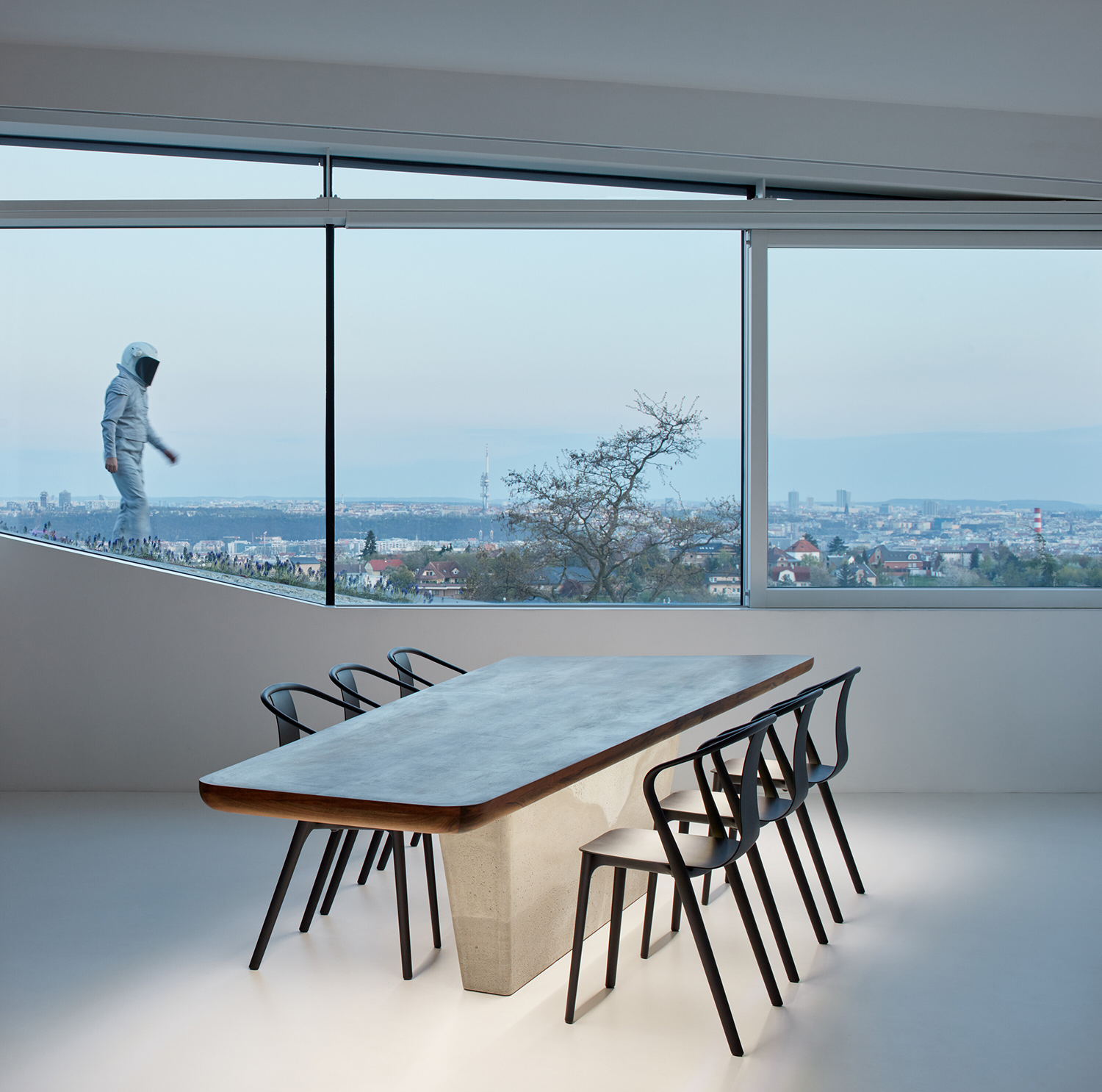 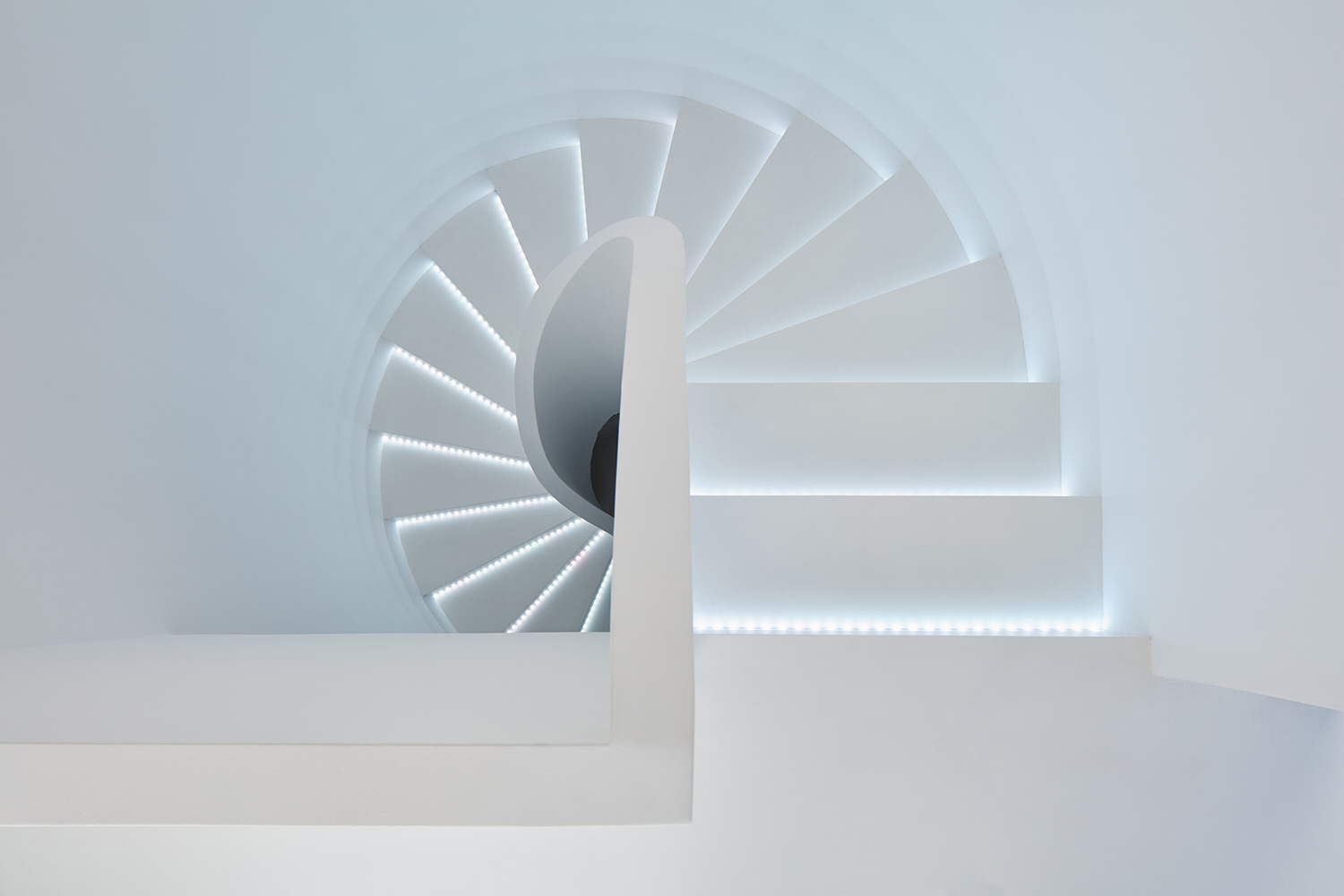 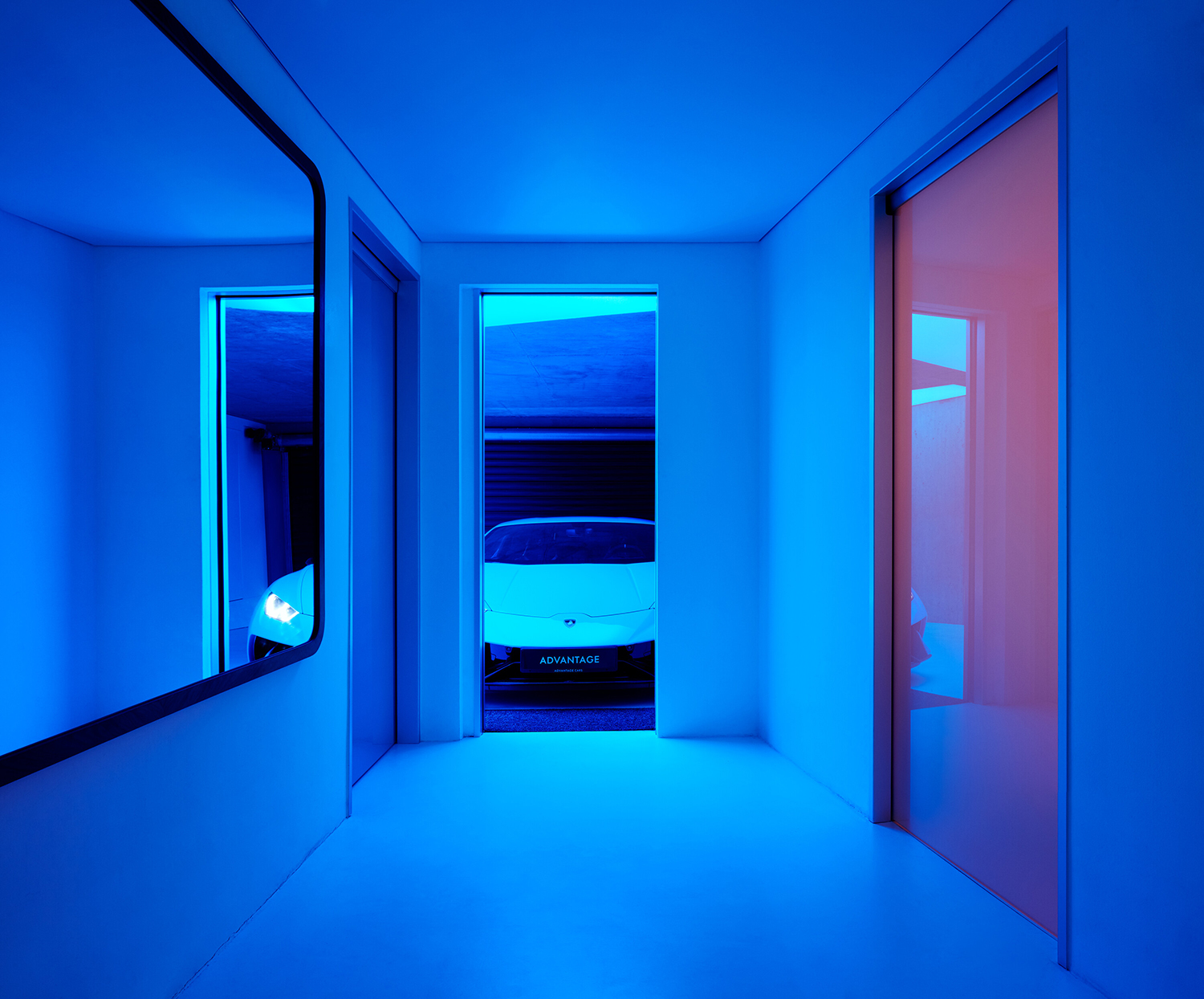