Austin Maynard Architects has built a vertically-stacked family home on a narrow 5.5-meter wide block in Brunswick, Melbourne. A couple with three energetic teenage boys asked for a robust family home they could live in ‘forever’. Union House is an intervention that directly layers one epoch on top of another. The Dutch gable of the original home is an identical copy of its eastern neighbour. From there the similarity abruptly ends. 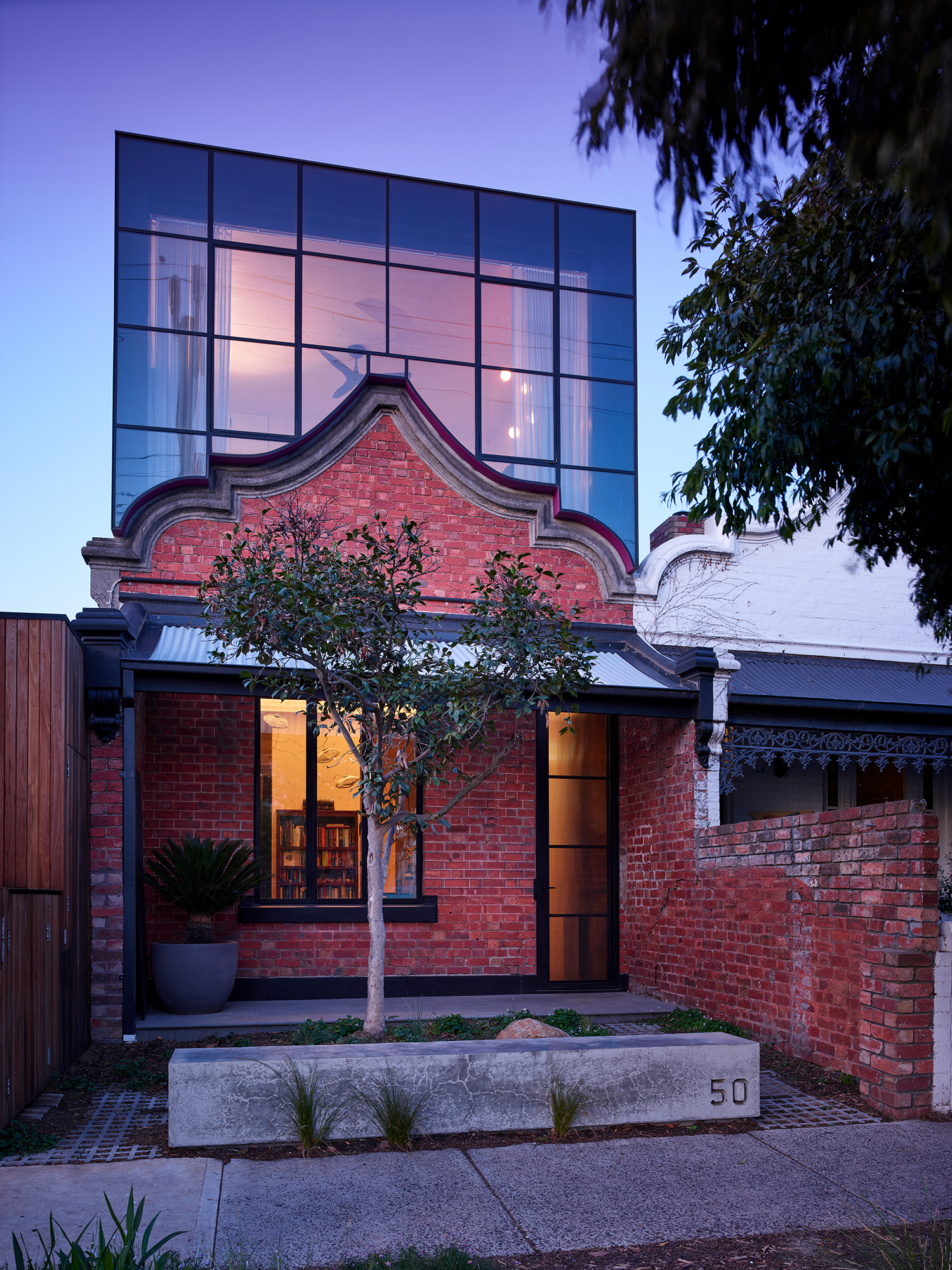 Union is an entirely new house, which has retained, restored and incorporated the beloved original cottage facade, despite no heritage overlays or council requirement.  Memory is important and heritage can be lots of fun. Demolishing a building and erasing history is far too easy. Union House is a place of memory, a home the family had lived in for years. Whilst it was a quaint cottage with a lovely facade, there was no stipulation to keep or protect it.  Regardless, both the owners and ourselves wanted to retain a piece of the home’s former life. 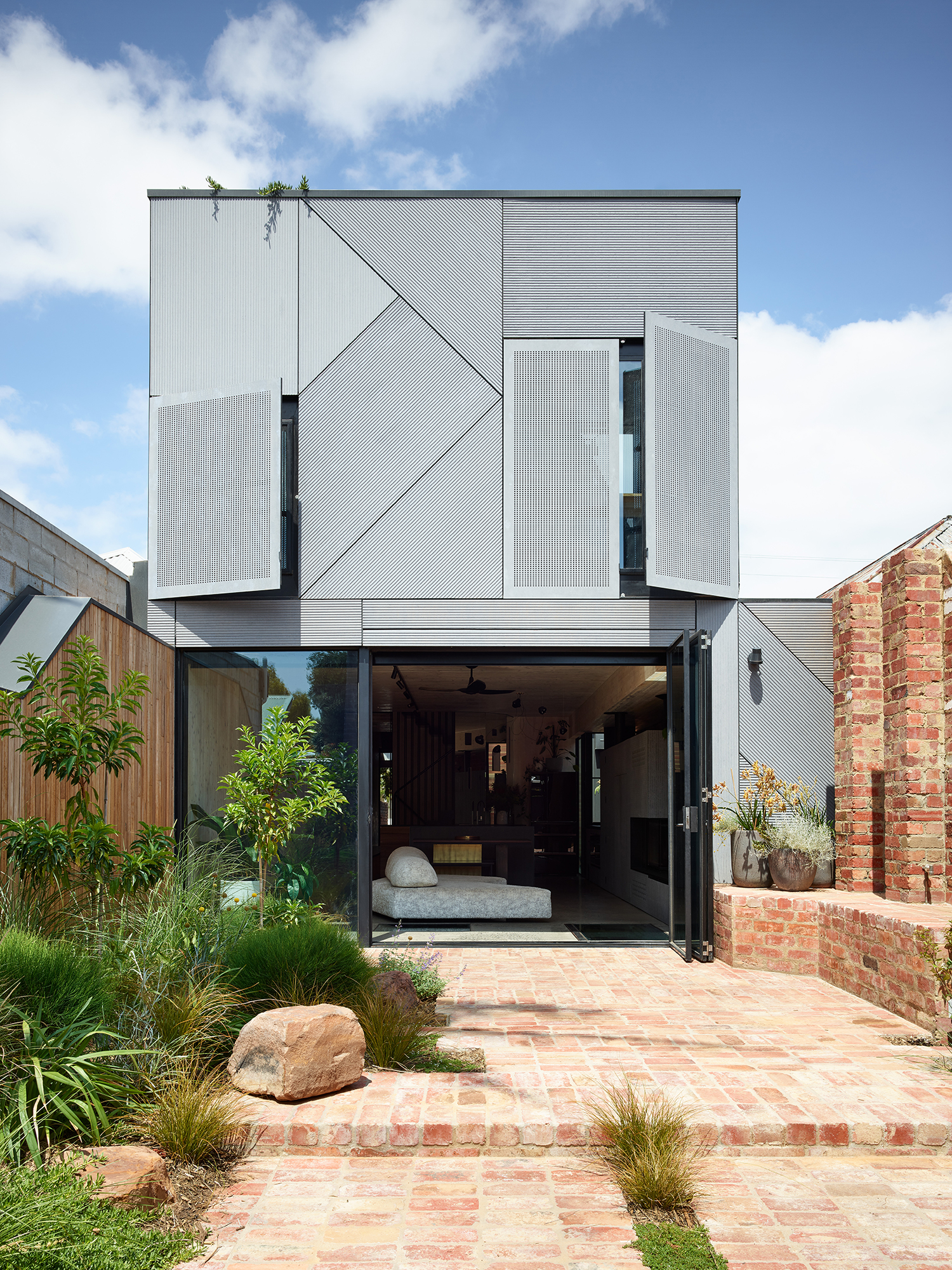 Union is a 4 bedroom, 3 bathroom family house with a study, a basement rumpus room, a roof deck and a carport. However that’s just the beginning of the story. Union is an example of people literally living on top of each other, and making that part of the joy of the house, rather than a problem. The house engages with the occupants in fun and dynamic ways. Despite being narrow and stacked, the home never feels cramped as spaces are designed to merge into others in various and sometimes surprising configurations. Using height, sliding walls, voids and openings, the volume of the rooms are blurred, fluid and flexible. Here, the standard house layout of cells and corridors has been subverted. There are split levels and ramps, hidden slopes, concealed steps and bookcase walls that split apart. 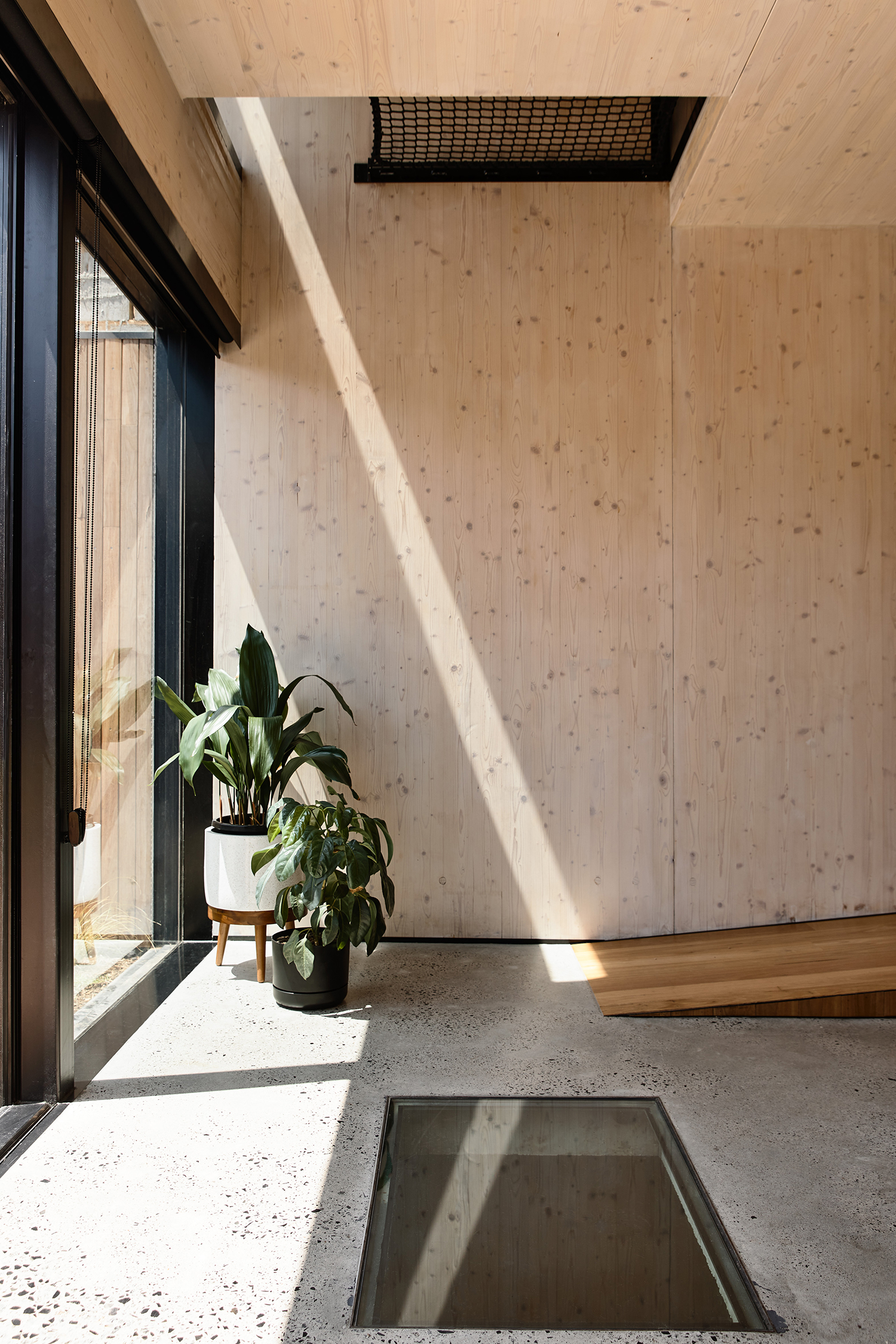 Rough brickwork at the front entry – all that remains of the original house, slides behind the new Cross Laminated Timber (CLT) walls. A ramp leads past the study and guest bedroom/reading retreat, to a central perforated black steel staircase that cuts through four levels within a CLT volume that rises the height of the house. Though intended to be covered up as a structural material, the CLT is exposed throughout, including walls, floors, stairs, ceilings and doors, unifying the interior. 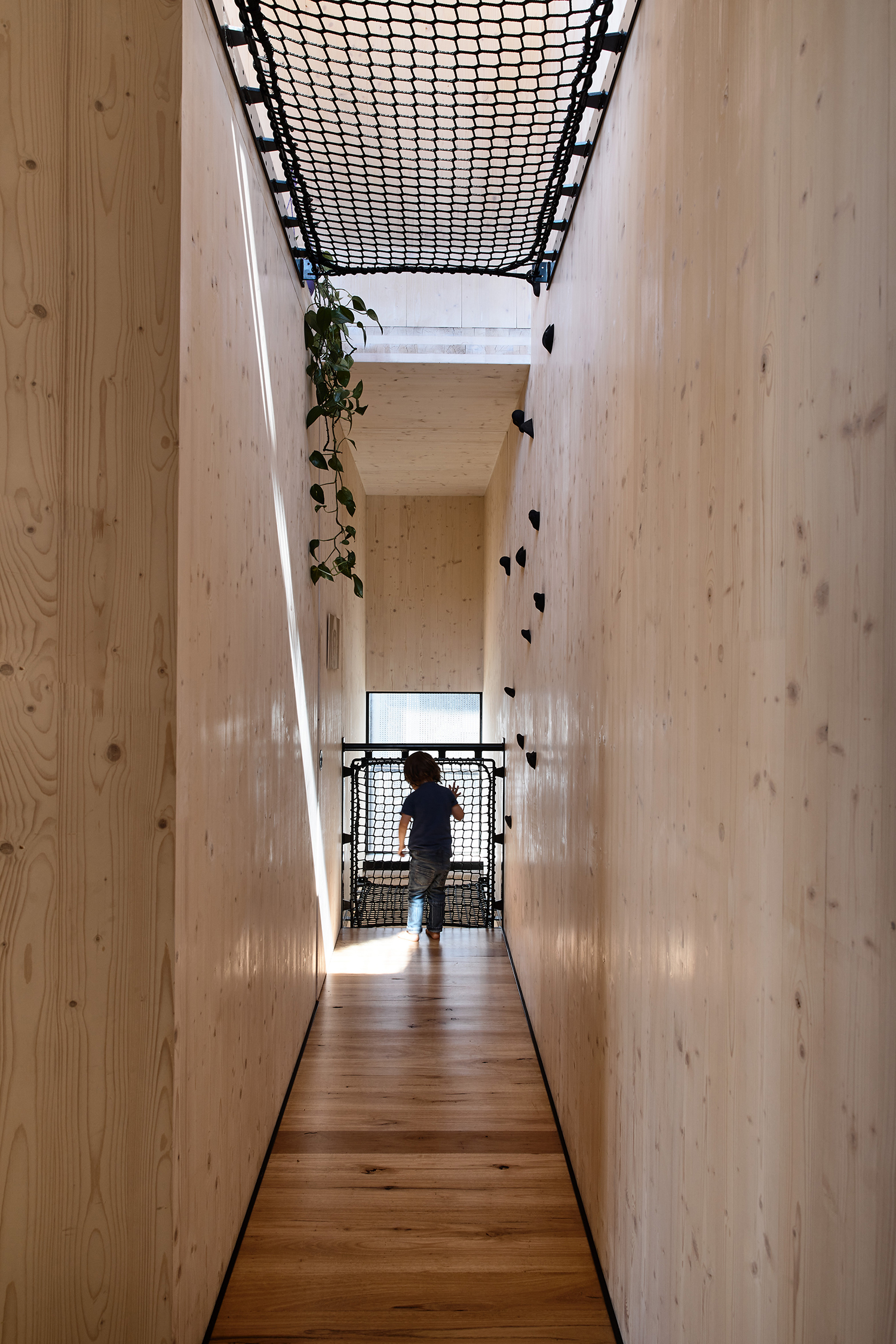 An open plan living /dining/kitchen is filled with secrets and surprises, including an outside escape route for the family’s two Siamese cats. Cupboard doors are constructed from Equitone, a material generally used as an external cladding. It contrasts with the pale CLT timber and shock of camellia pink inside. Glass floor panels allow sunlight to stream directly into the basement rumpus below, one opens to allow th daring direct entry via a steep ‘slide.’ 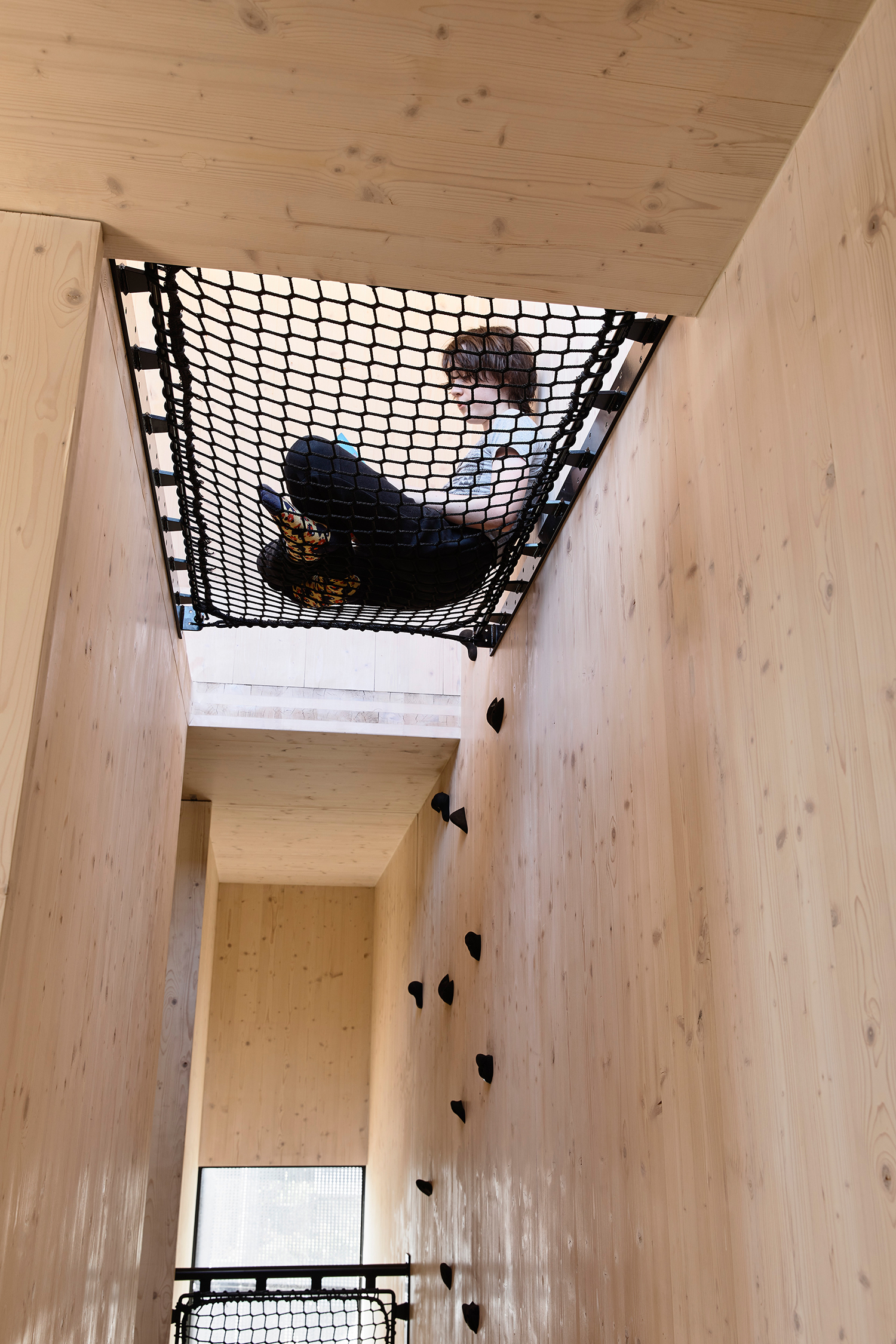 A plethora of intriguing and imaginative ideas arose in client conversation, including the playful notion of an alternate route though the house. In the centre of Union is a black steel winding staircase, with part perforated treads. It is a beautiful way to move between levels, however the clients wanted a back up plan. A way to get from the basement all the way to the roof without needing to take the standard route. A ramp, a glazed trap door, a series of climbing holds and nets enable this energetic family to clamber up walls without ever interacting with the stair. A throughly unconventional way to move through a home, and a wonderful way to distract active boys. Though filled with ideas Union is a coherent and practical family home that encompasses and responds directly to this unique client. 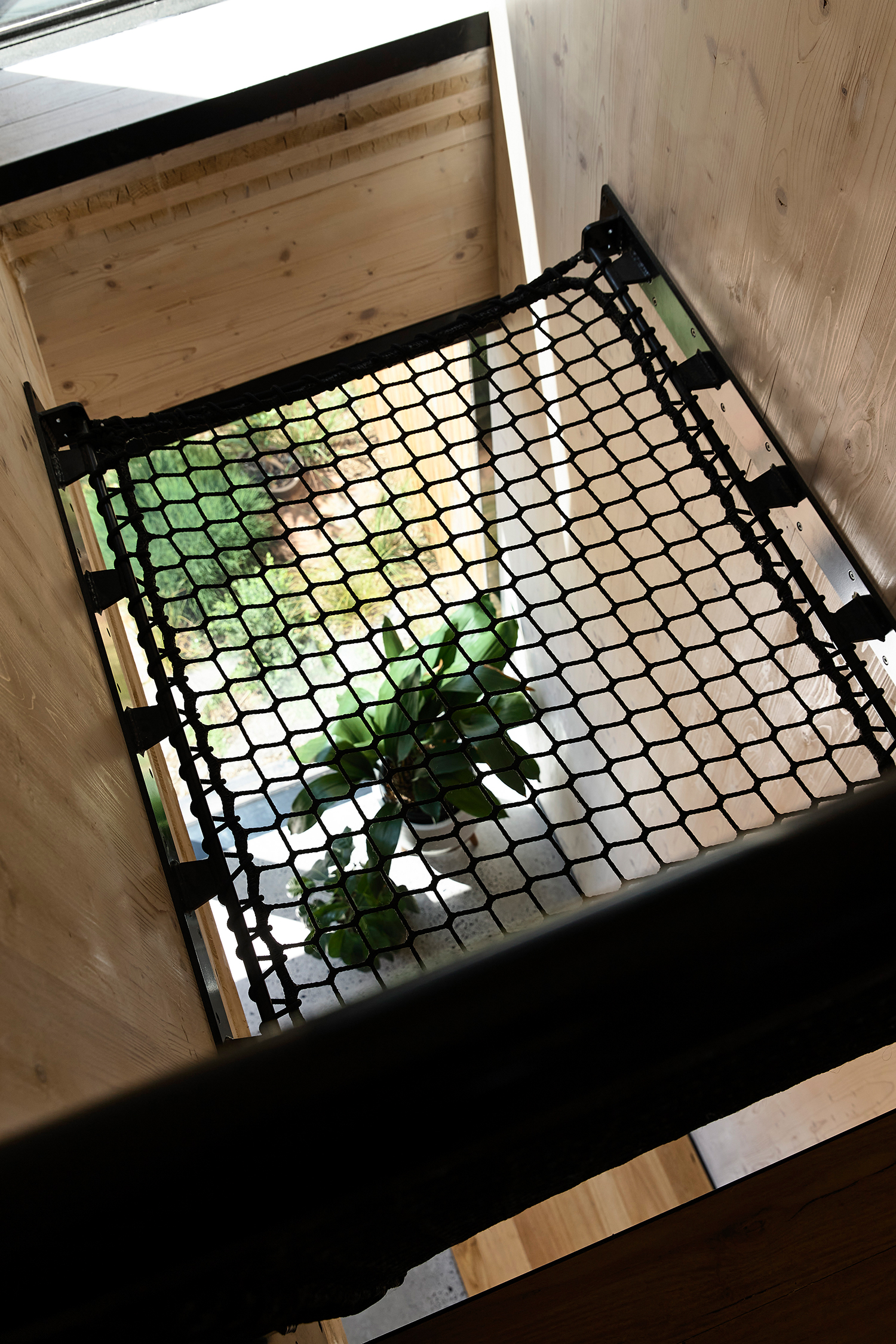 Union is a vertical house, with stacked spaces and voids, unified through the use of exposed Cross Laminated Timber (CLT) walls and ceilings. Carbon sequestering CLT was used to reduce time on site, minimise trades and accumulated layering within the building process. CLT offers a multitude of benefits in terms of performance and environmental sustainability. It comes from sustainably managed forests and is manufactured to exact measurements leading to very little waste and simpler construction. As a product is it not only durable but also entirely recyclable. 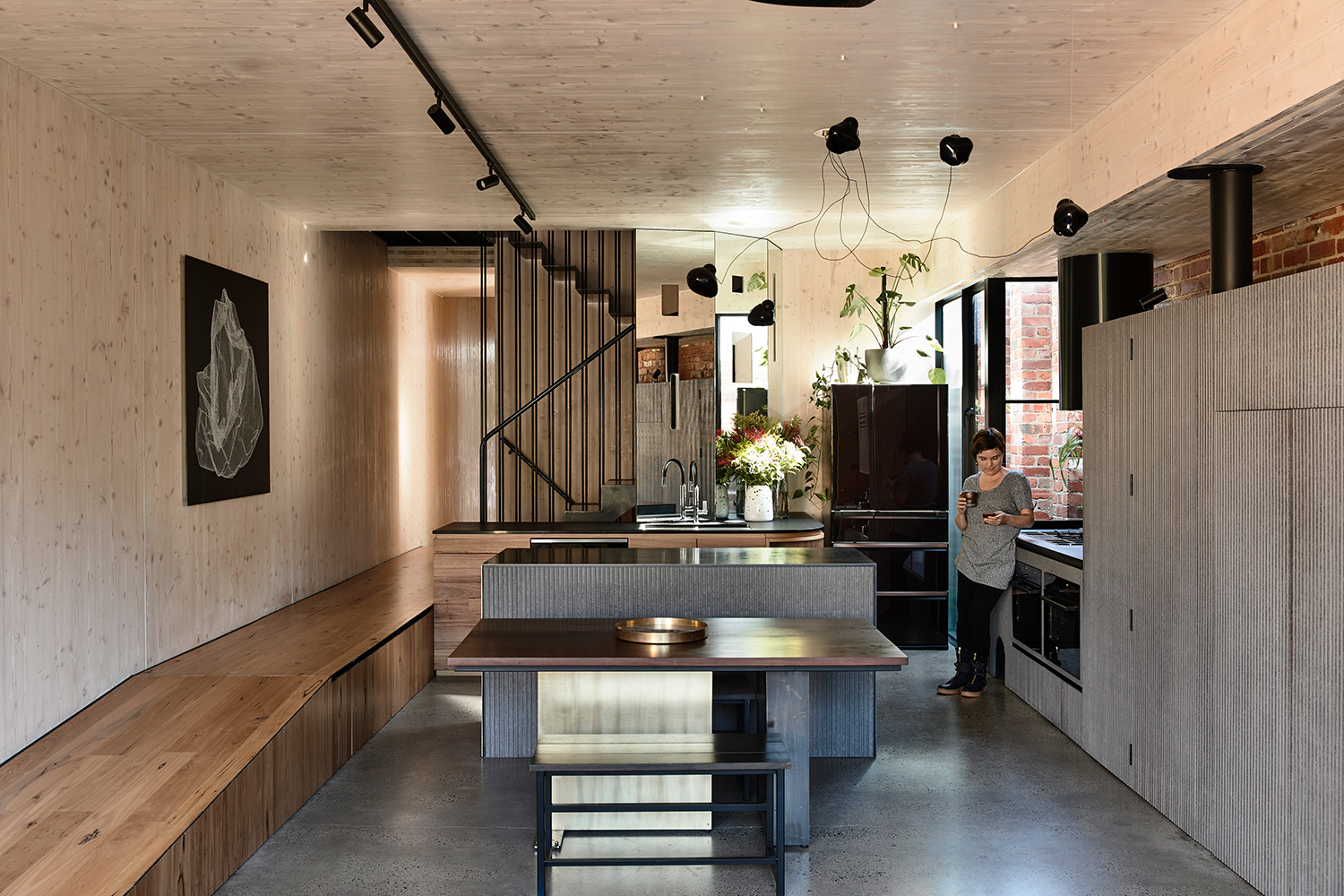 A water tank is buried the backyard, a green roof above the bedrooms improves thermal performance and a concrete slab adds thermal mass at ground level. At the rear, a concealed retractable awning provides shade, while external recycled brick paving, plinth and fences are a nod to the site’s history. Where once there was a high, oppressive front fence there is now a concrete bench, providing a resting spot for pedestrians and neighbours. 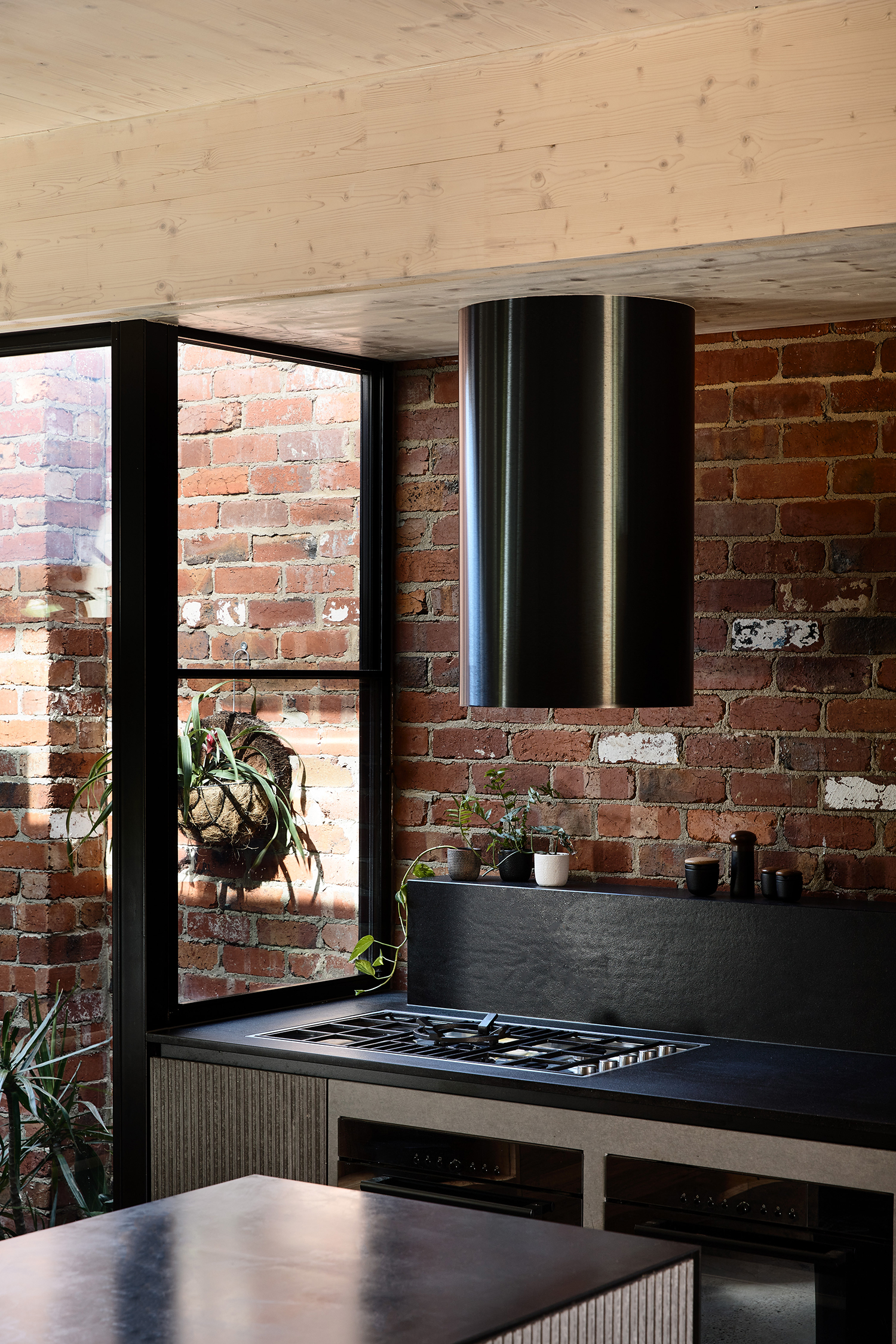 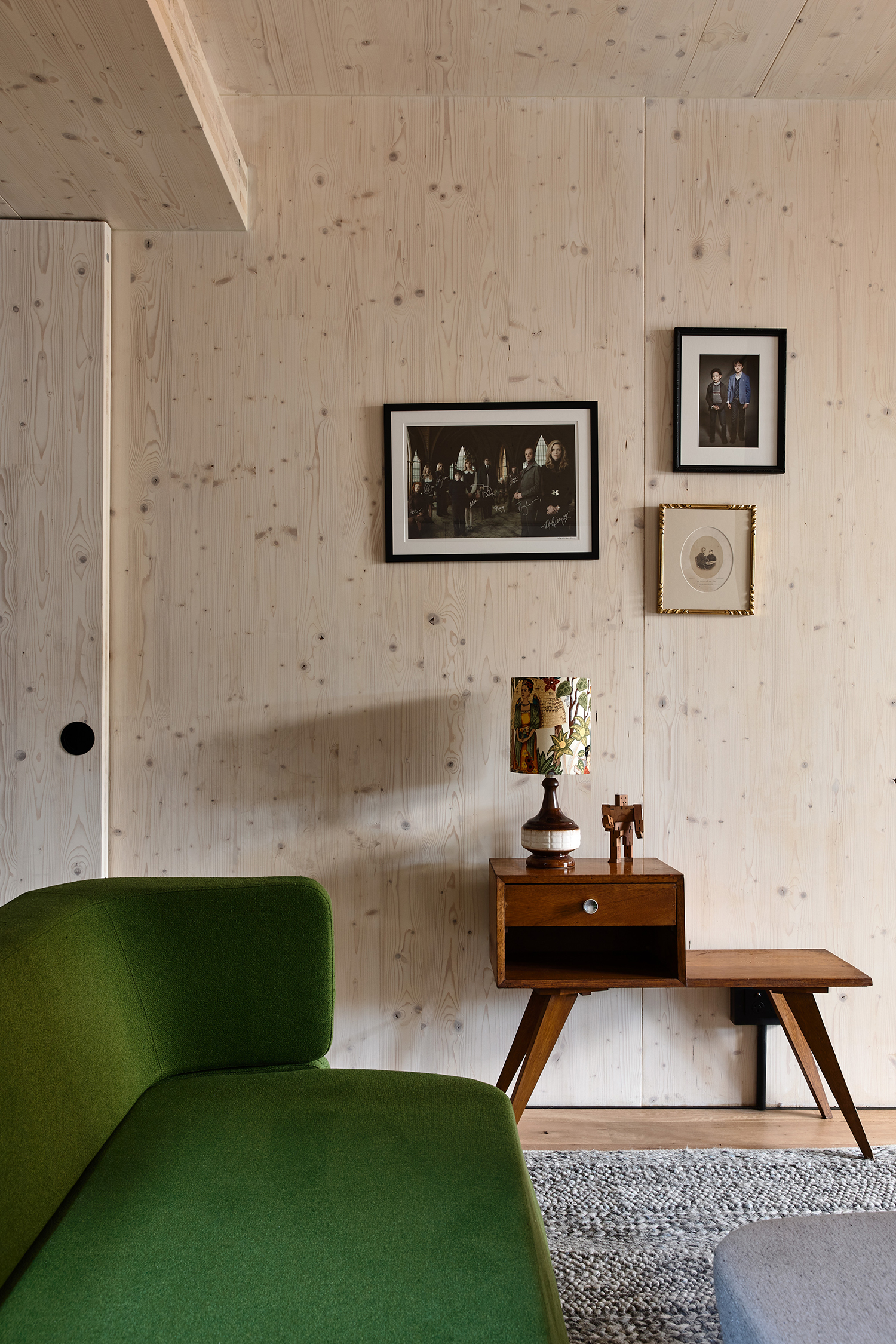 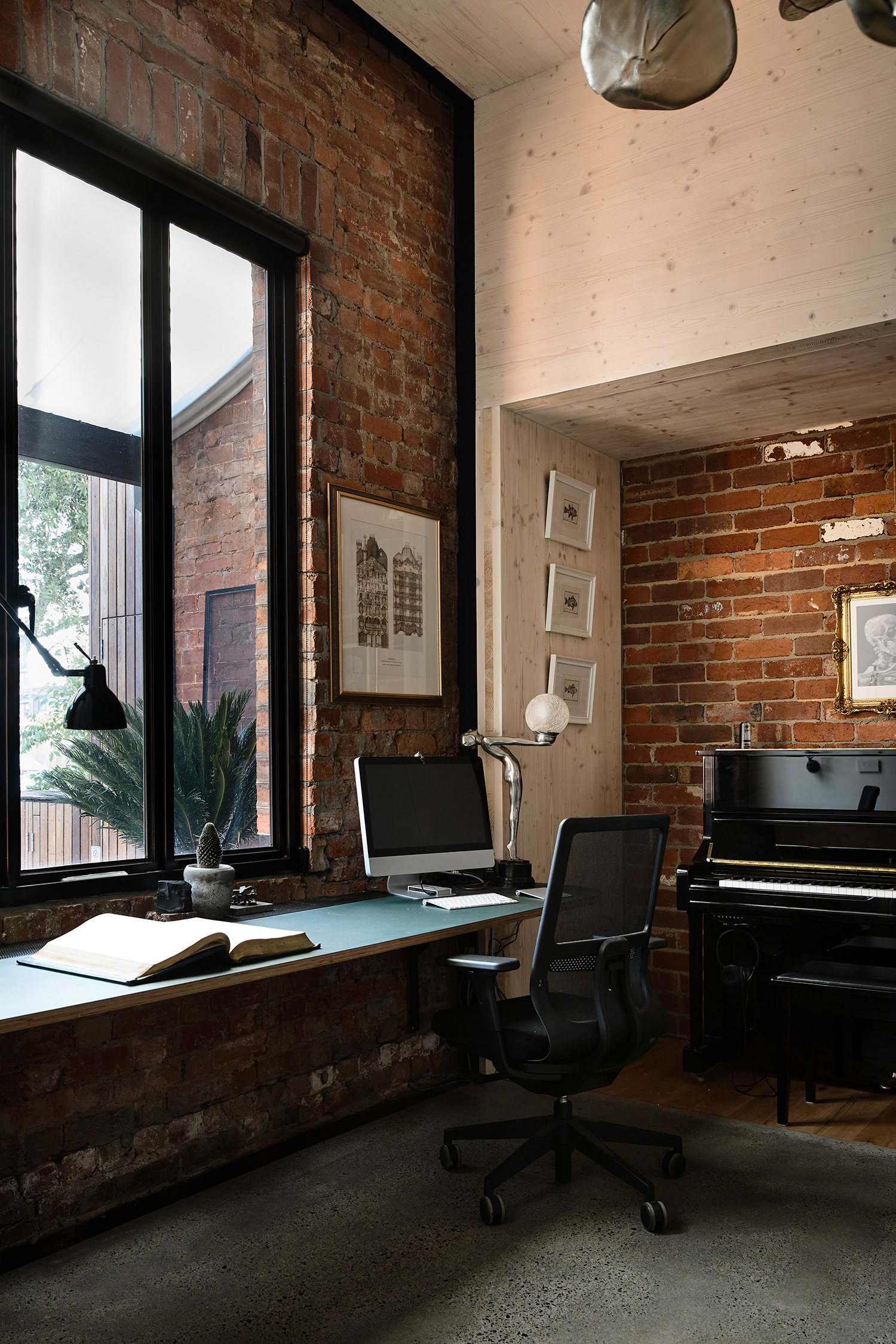 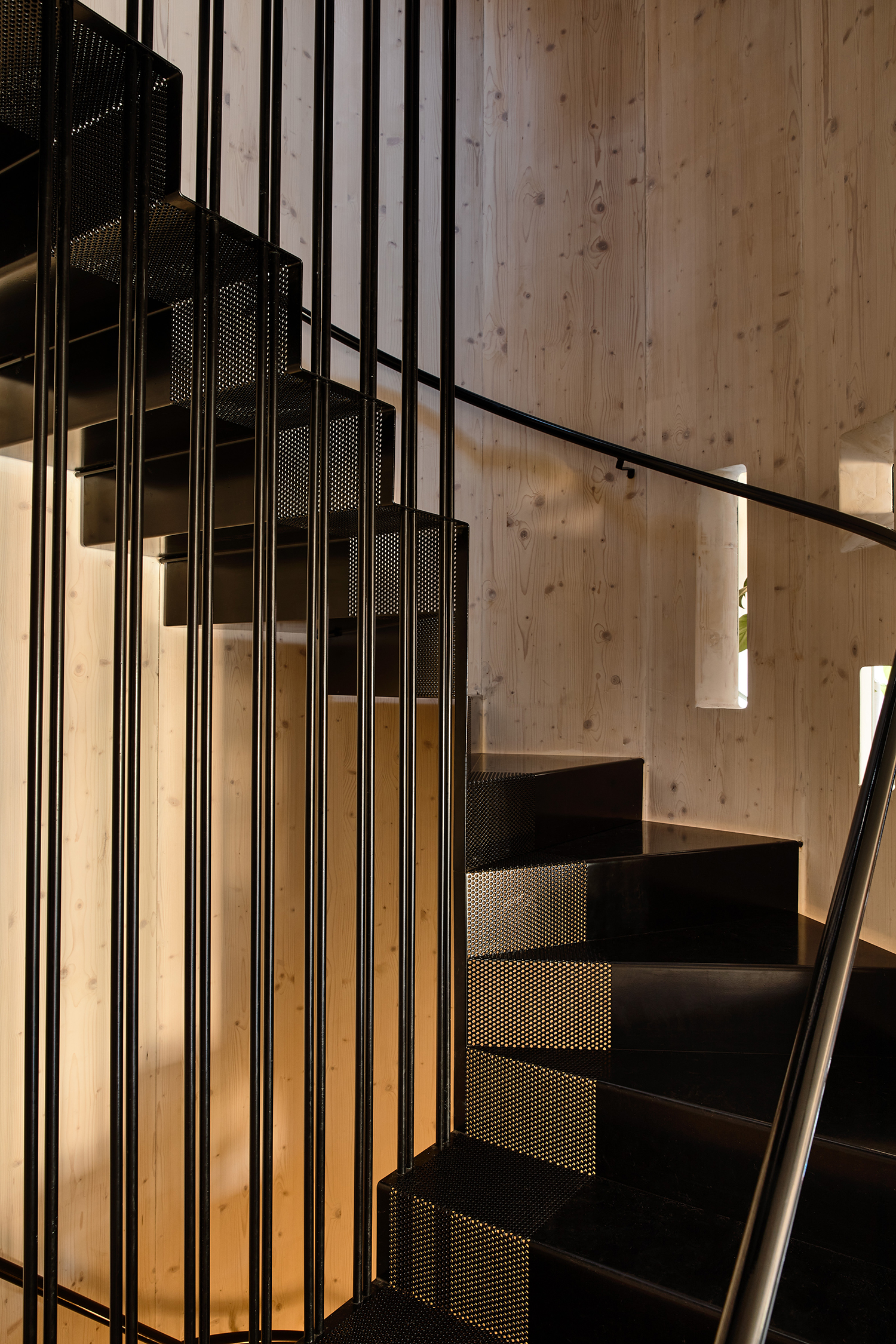 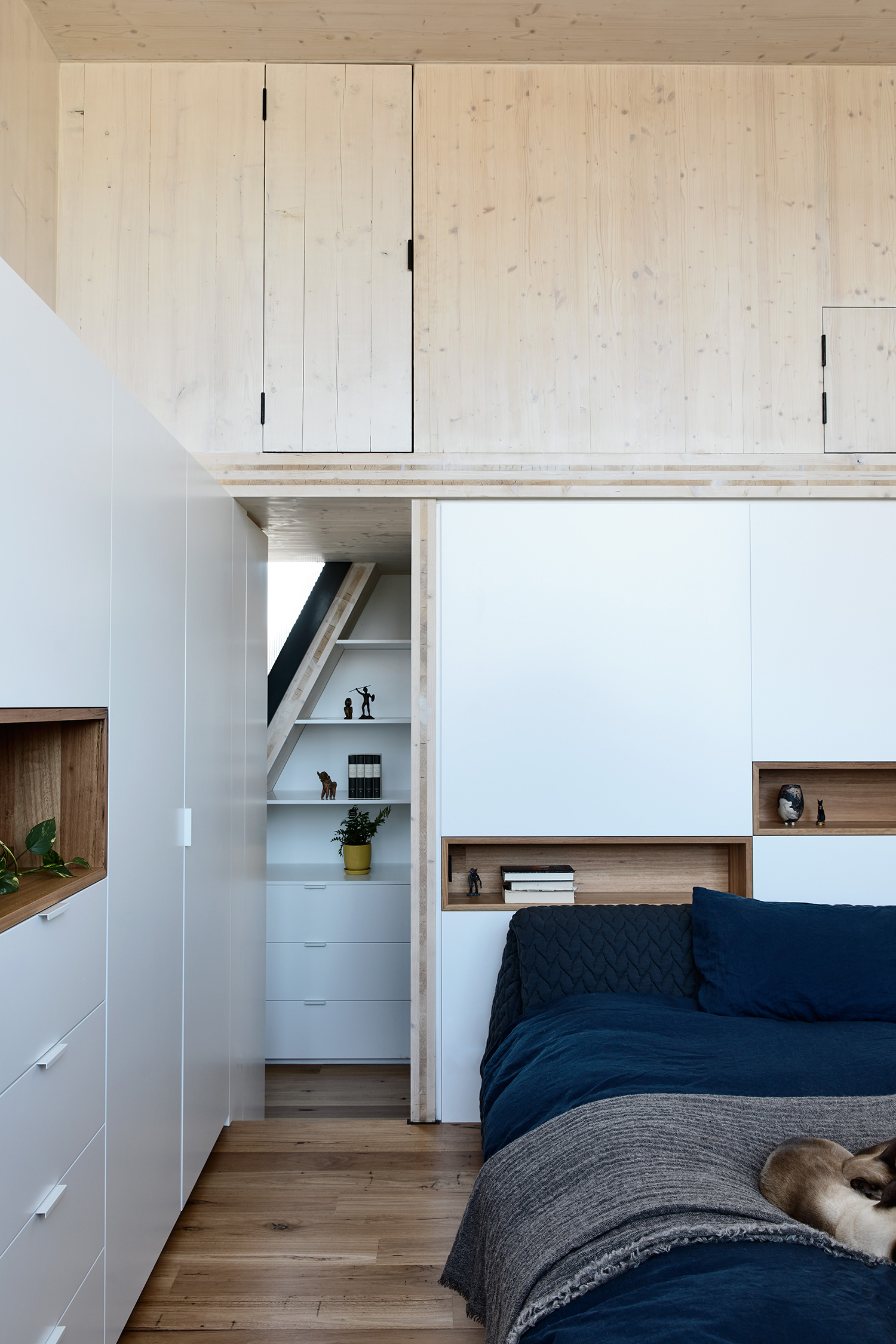 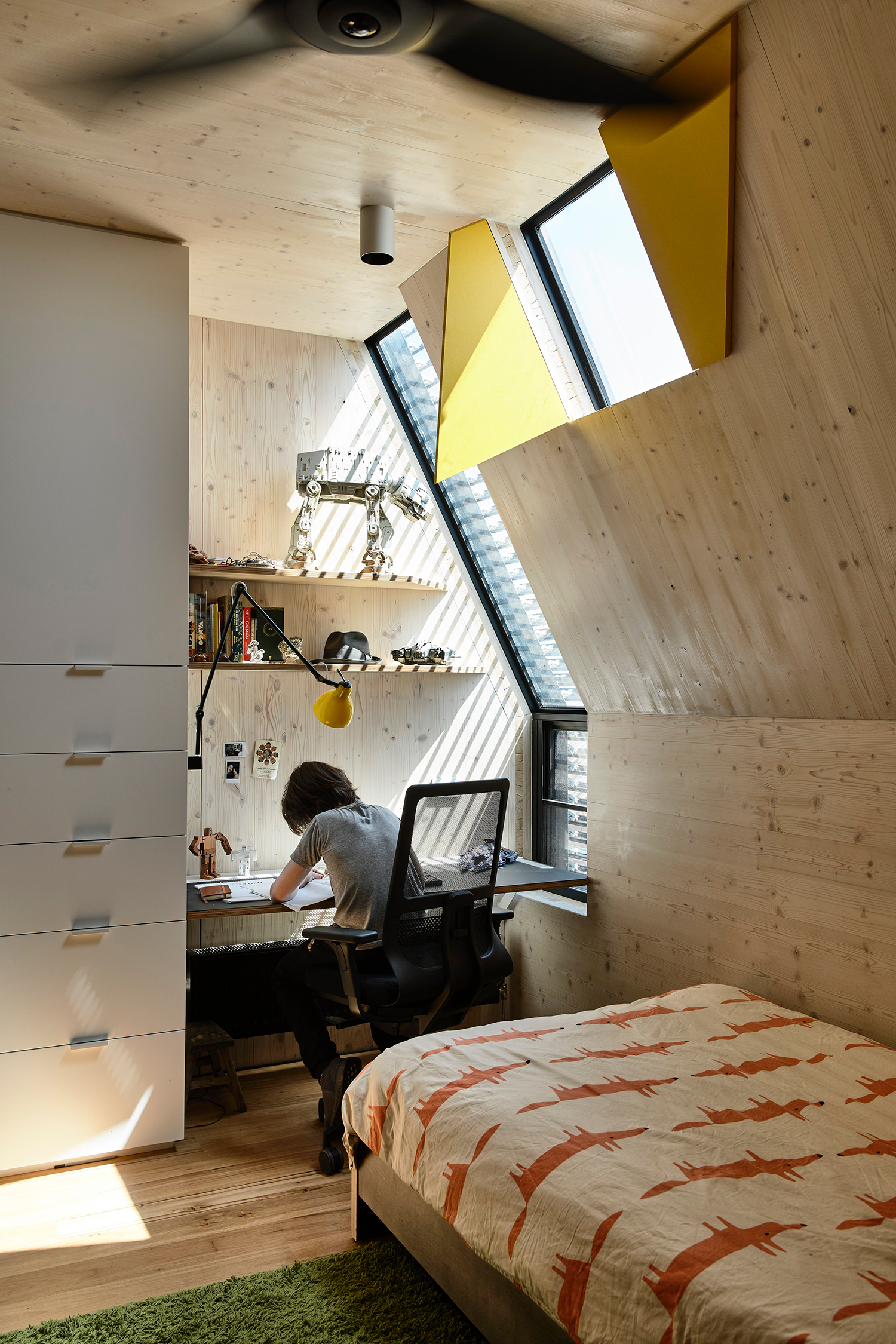 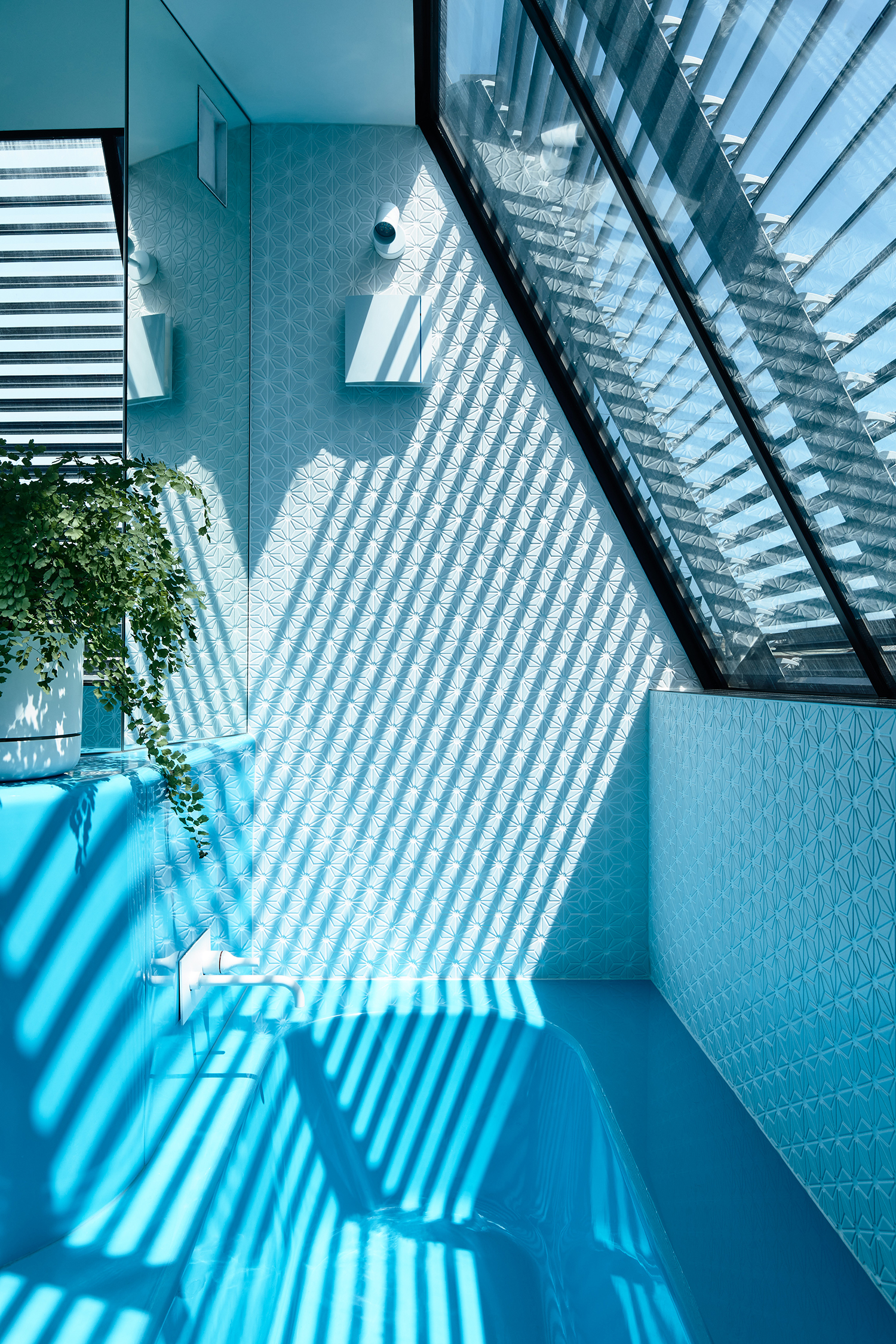 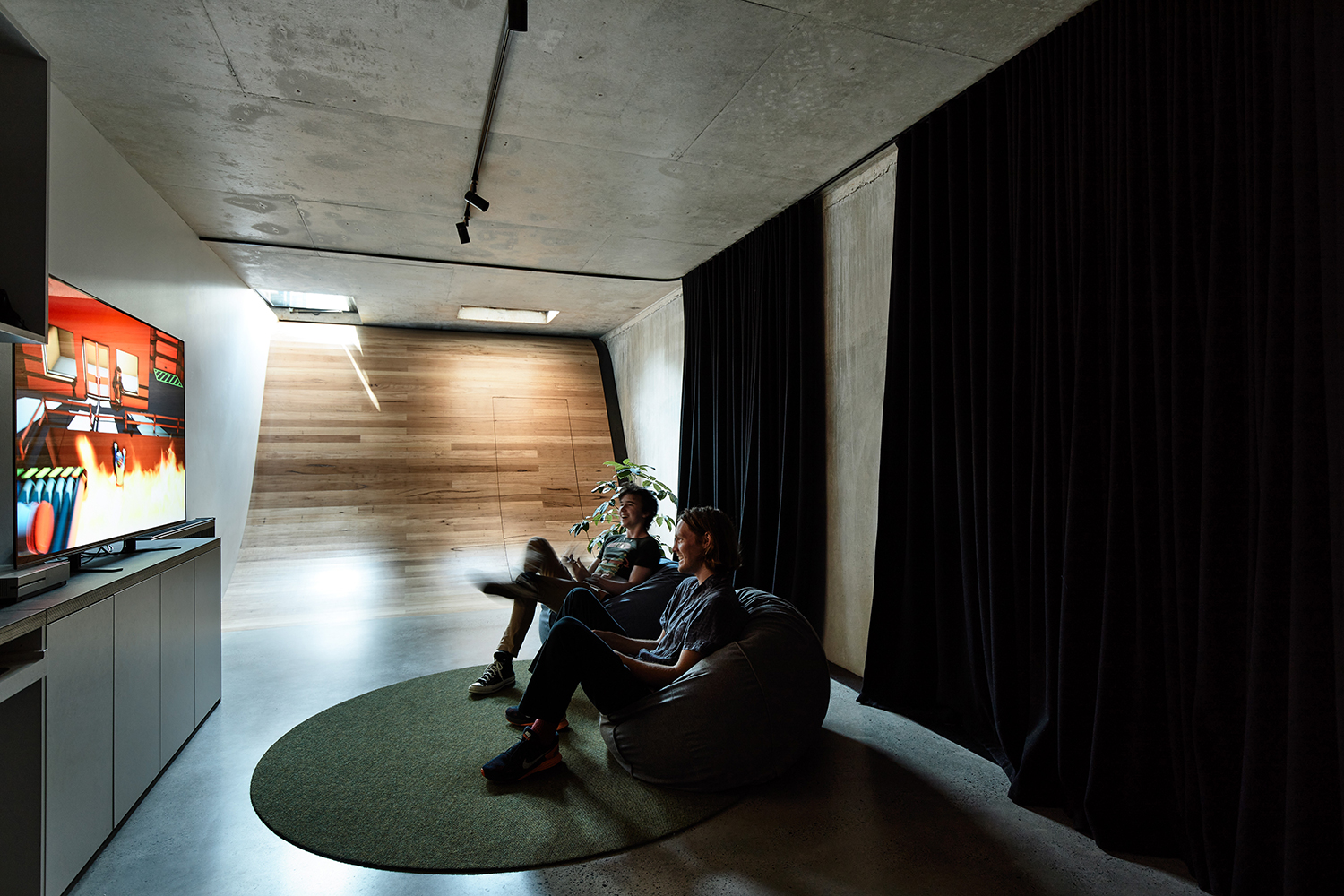 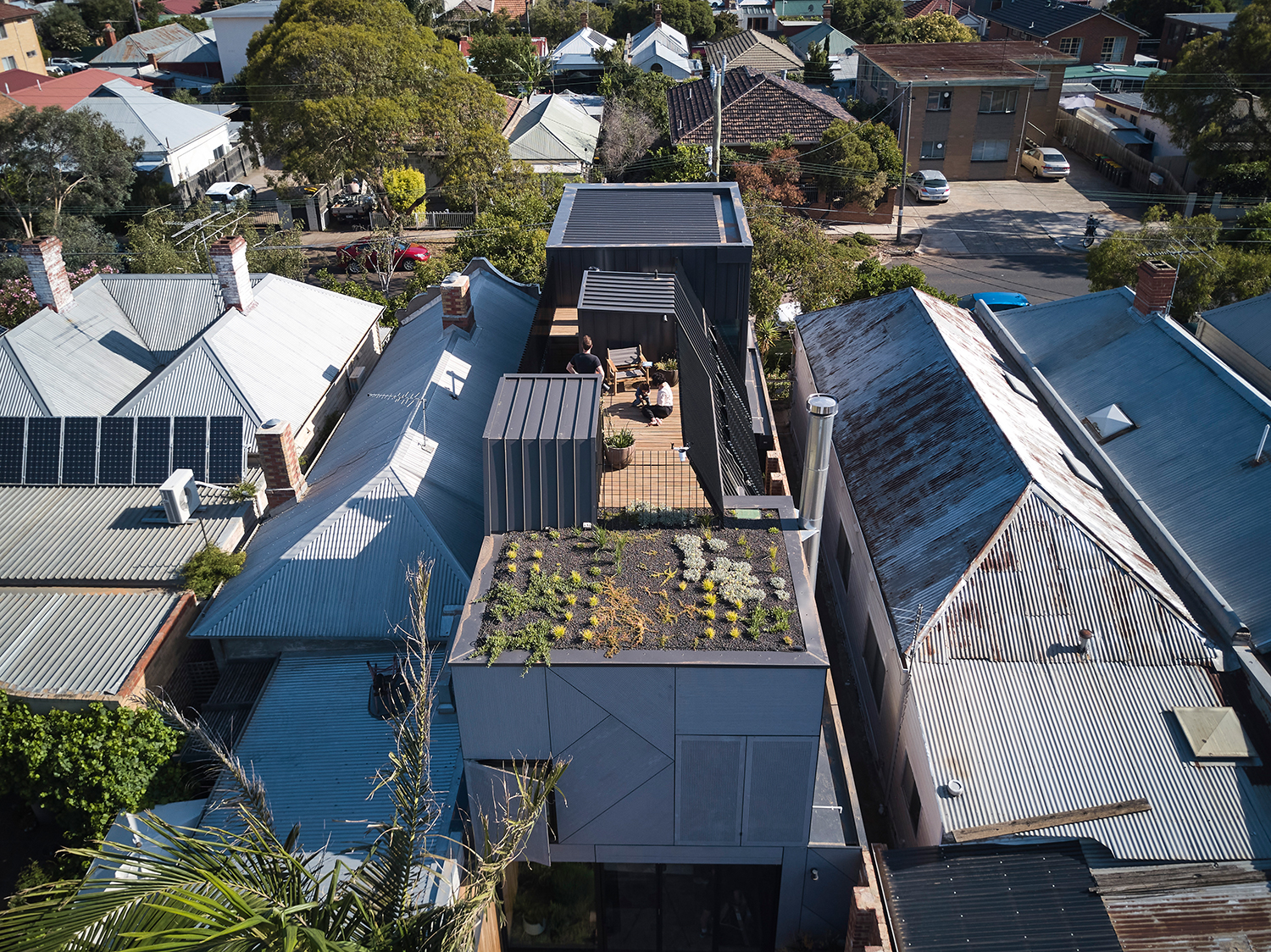 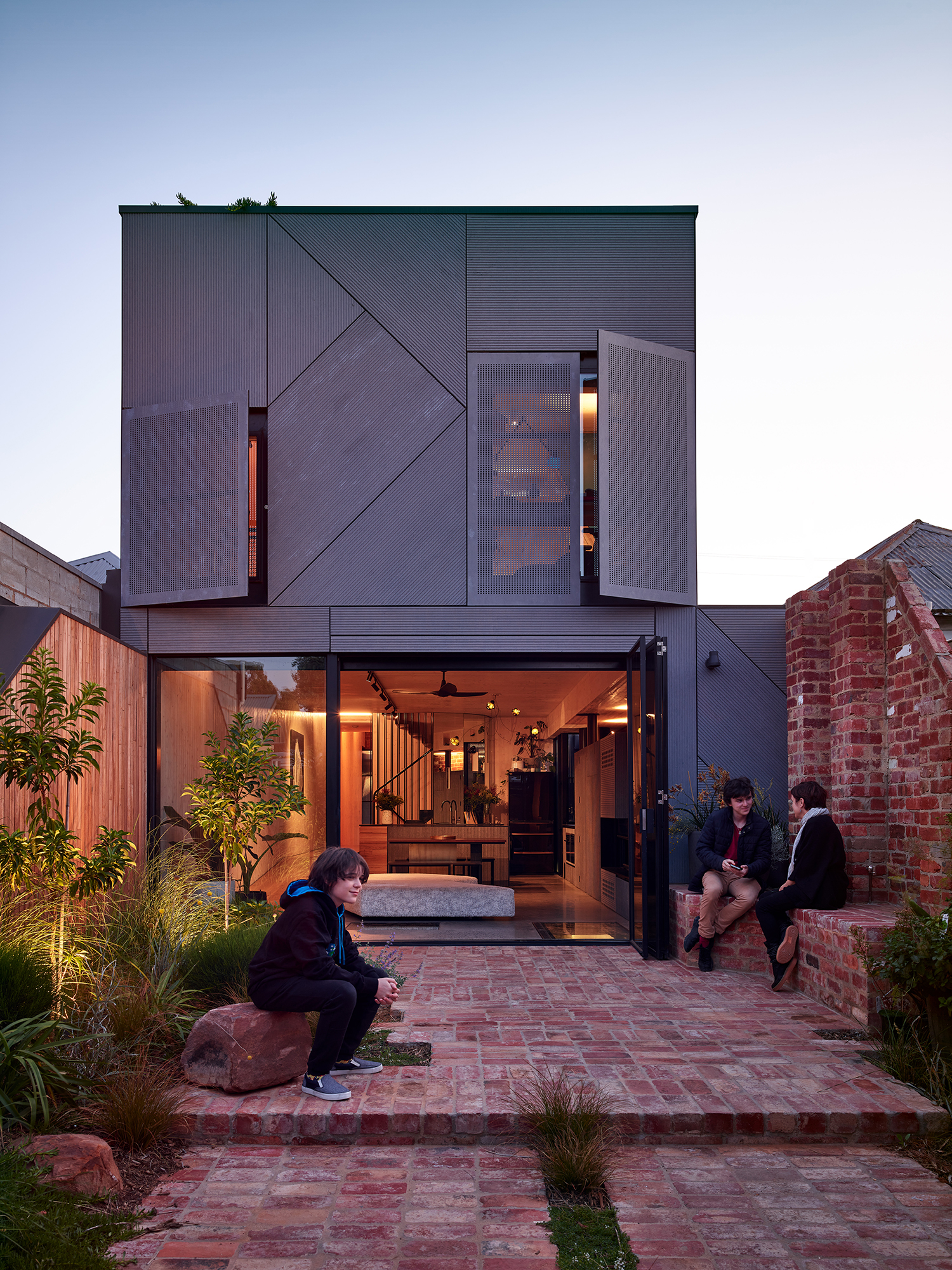