Architecture studio Atelier-r has added a series of Corten steel bridges and platforms to provide tourist access to the ruins of Helfštýn castle in the east of the Czech Republic.

Rising high above the Moravian Gate valley, Helfštýn Castle is the second-largest complex in the Czech Republic right after Prague Castle. Helfštýn was established in the 14th century. In 2014 the Renaissance palace ruins had to close down due to the severe safety hazards such as falling masonry and remains degradation. 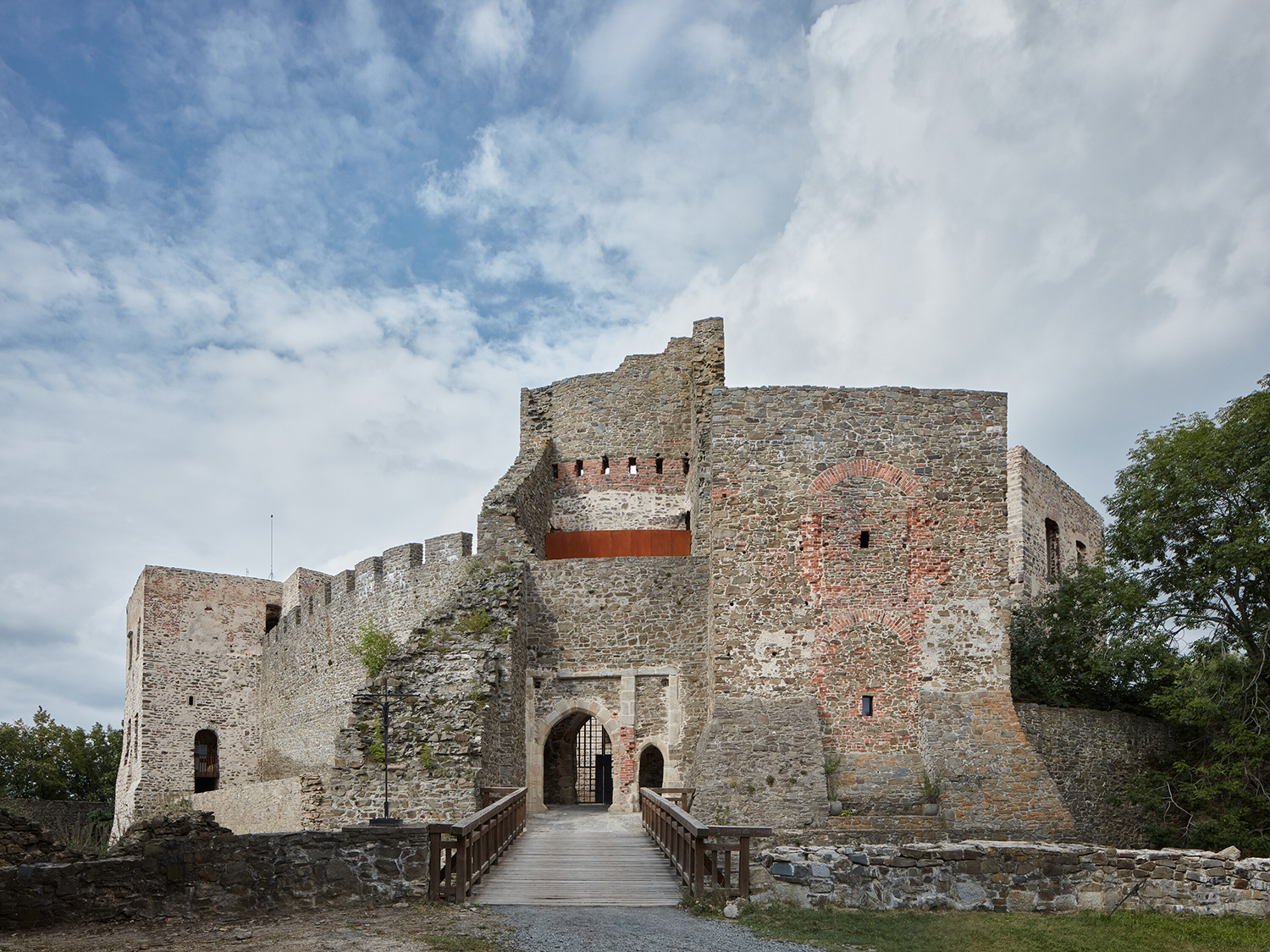 “We aspired to go beyond the technical reconstruction assignment,” said Atelier-r’s principal architect Miroslav Pospíšil. “We strived to compliment the historical building with the contemporary architecture that would focus on both practical use as well as gaining an aesthetic appeal.”

“In order to immerse the visitors in the historical development of the original renaissance palace we inserted new sightseeing routes into the already existing gaps in the ruins, connecting the ground floor with the newly accessible higher levels of the palace,” Pospíšil told urdesign.

“Newly added contemporary elements are clearly recognizable in the historical construction. We worked with three basic materials, one for each level of the building. The roofing is made of glass on steel beams, the staircases and footbridges have been made of corten steel and the ground floor paths are made of polished concrete.” 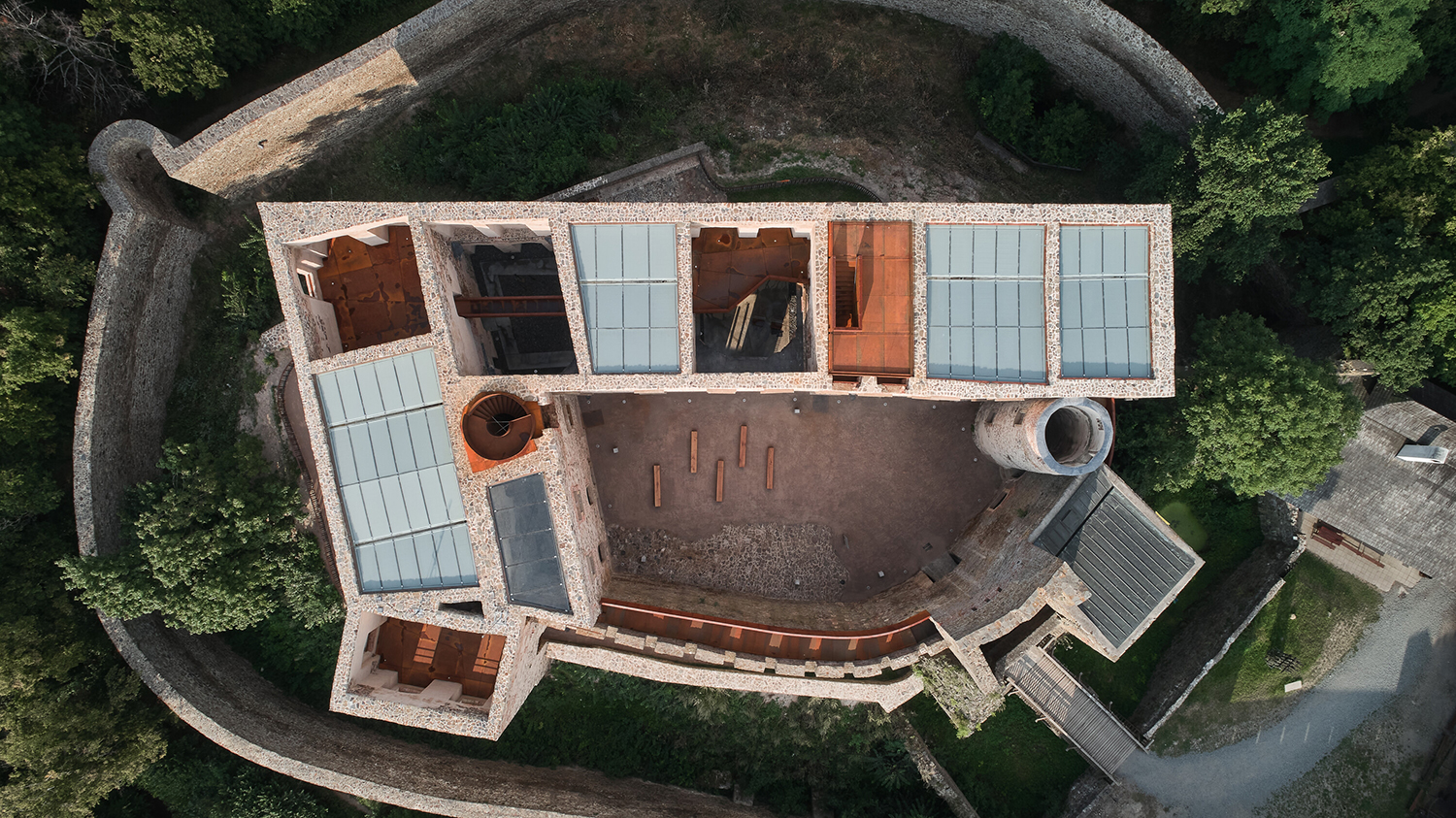 The flat glass roofs have been inserted in between the walls of the ruins. The wide-open sky was the key inspiration when choosing the material for the roof. Using glass provides perfect day light conditions to the interior of the palace. “We have chosen to work with the sanded glass for a couple of reasons. It is easy on the maintenance and the flat dispersed light compliments the exhibitions inside the palace. The chapel roof was an exception. The clear glass roof symbolizes heaven quite literally,” explains Atelier-r. “We have put a roof on five chosen chambers only. The corten footbridges serve as a roof for the staircases. We intentionally left out some of the spaces in order to enhance the spirit of the impressive ruins and encourage the visitors to look up to the sky.” 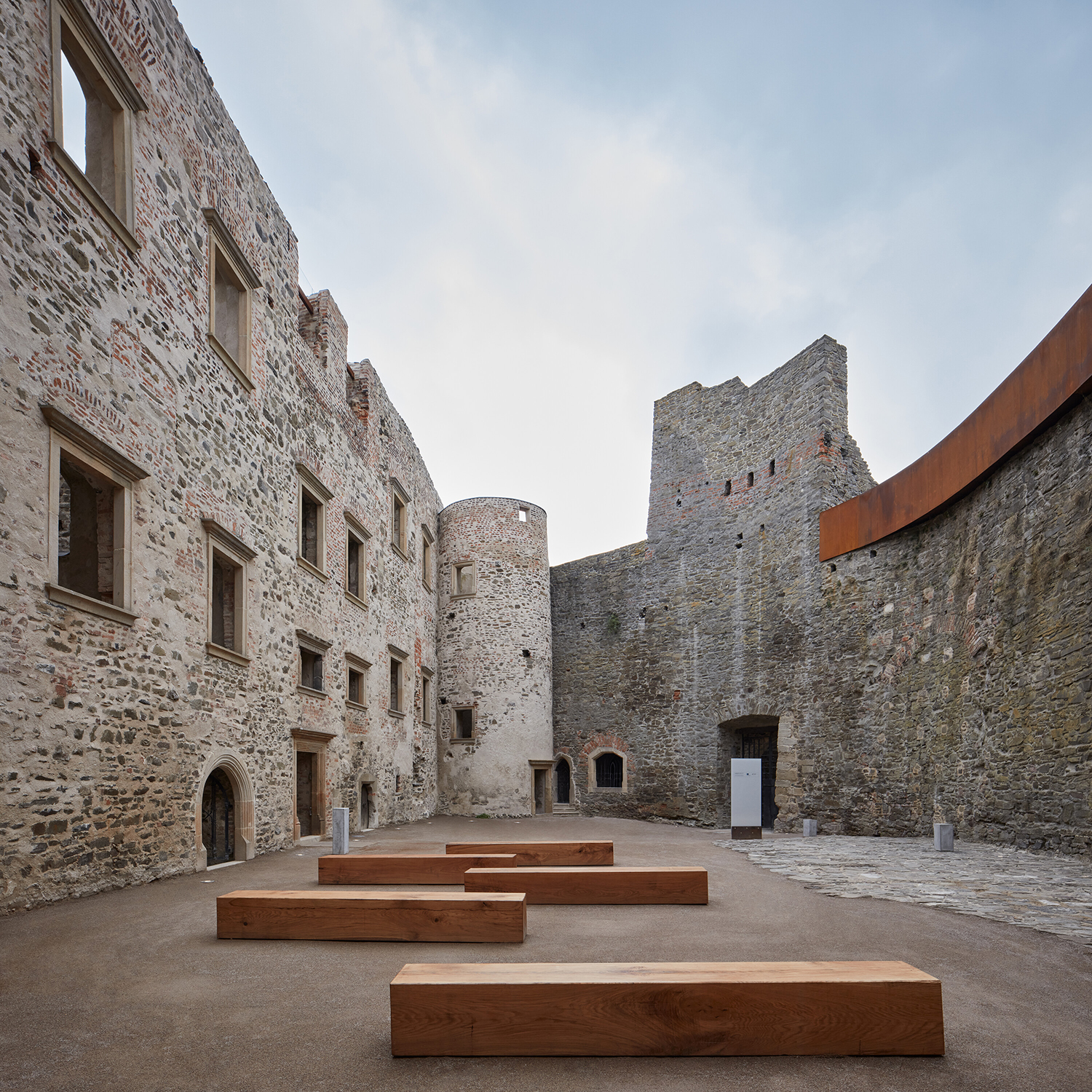 What once used to be a roof has now become the new sightseeing route. Being this close to the construction details of the original palace and as high as the top of the walls allows the public to admire the historical significance of the sight and the sheer views of the surrounding region.

It was crucial to choose a material that would be timeless. Corten is a special iron alloy that undergoes a corrosion, matures and matches the texture of the old historical walls. Moreover, Helfštýn Castle is well-renowned for its iron craftsmanship tradition, therefore it made a perfect sense to choose corten to work with. 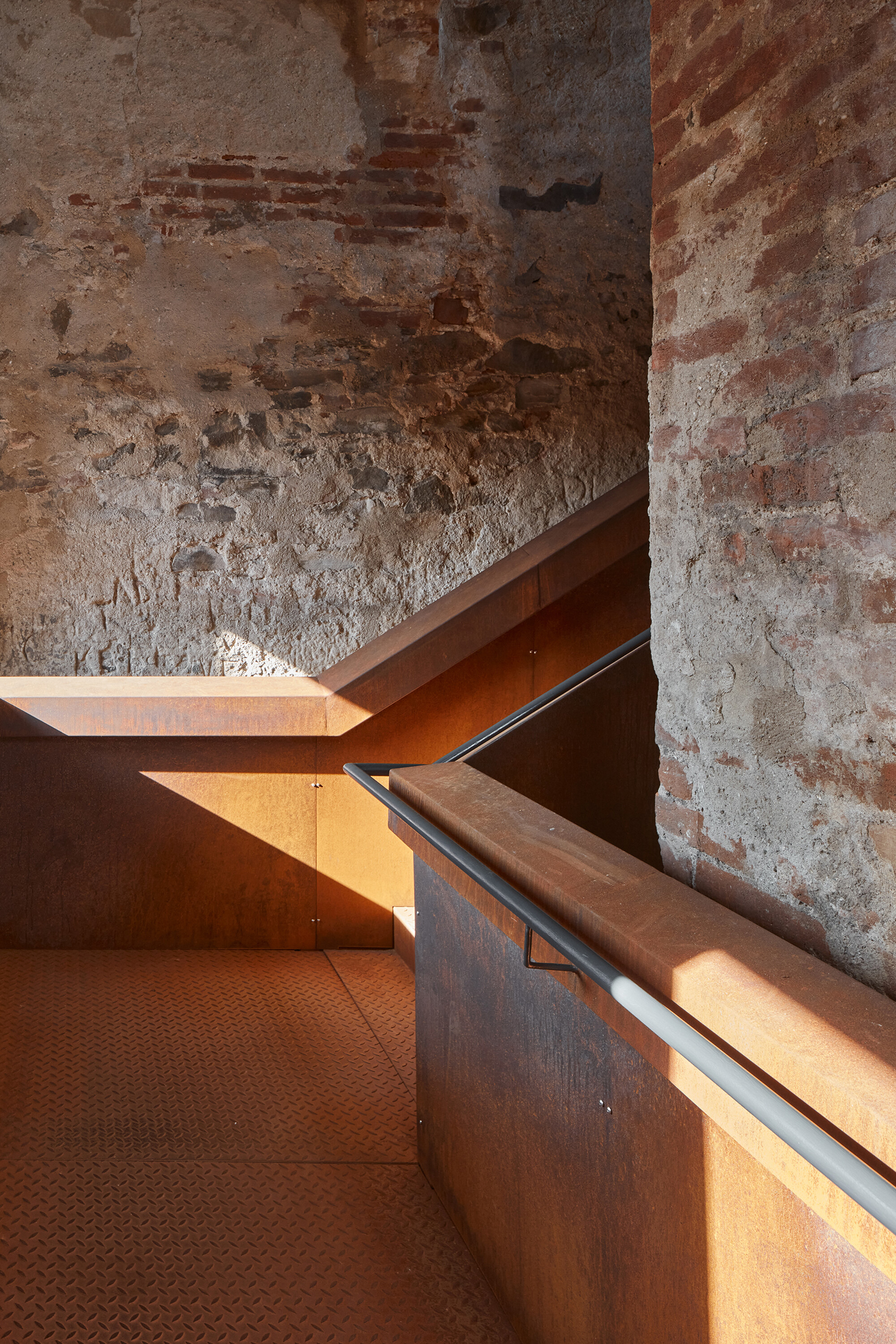 Polished fair-faced concrete boards were laid down into specific areas on the ground floor of the palace to form a network of platforms and pavements. The concrete pavement edges have been finished by rigorously straight Corten profiles. The gaps between the pavements and the walls have been filled with gravel, which ties together the uneven textures and lines. 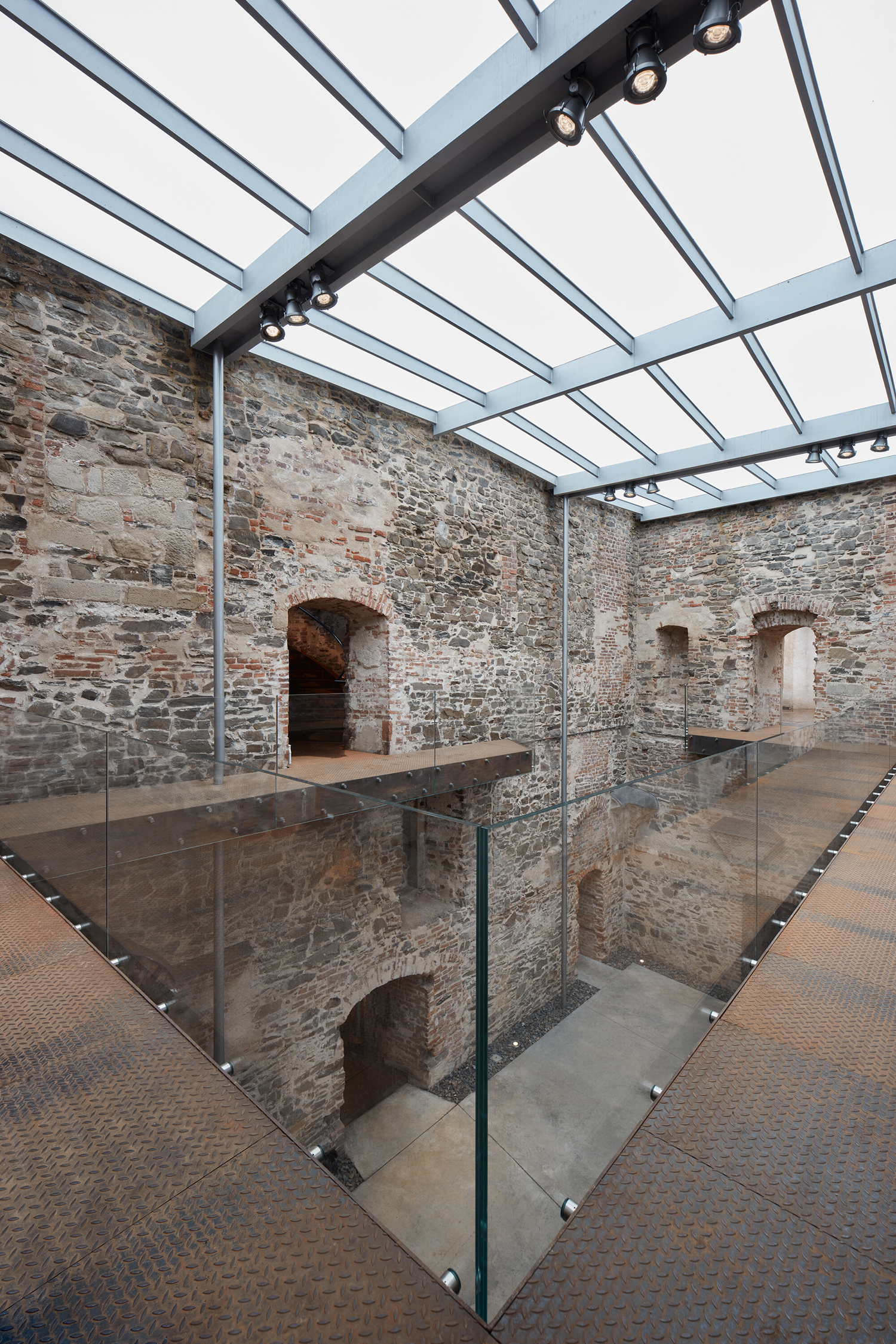 “Our concept is based on the respect towards the historical building and it pursues a major effort to preserve the castle’s authentic character,” said Pospíšil. The palace gained an attractive sightseeing route that allows the visitors to learn about the building history and enjoy the picturesque views from the footbridges on the upper levels of the castle what once used to be a roof. The contemporary architecture does not compete with the historical building, rather it creates a cohesive unit in which all the elements, old and new go hand in hand. 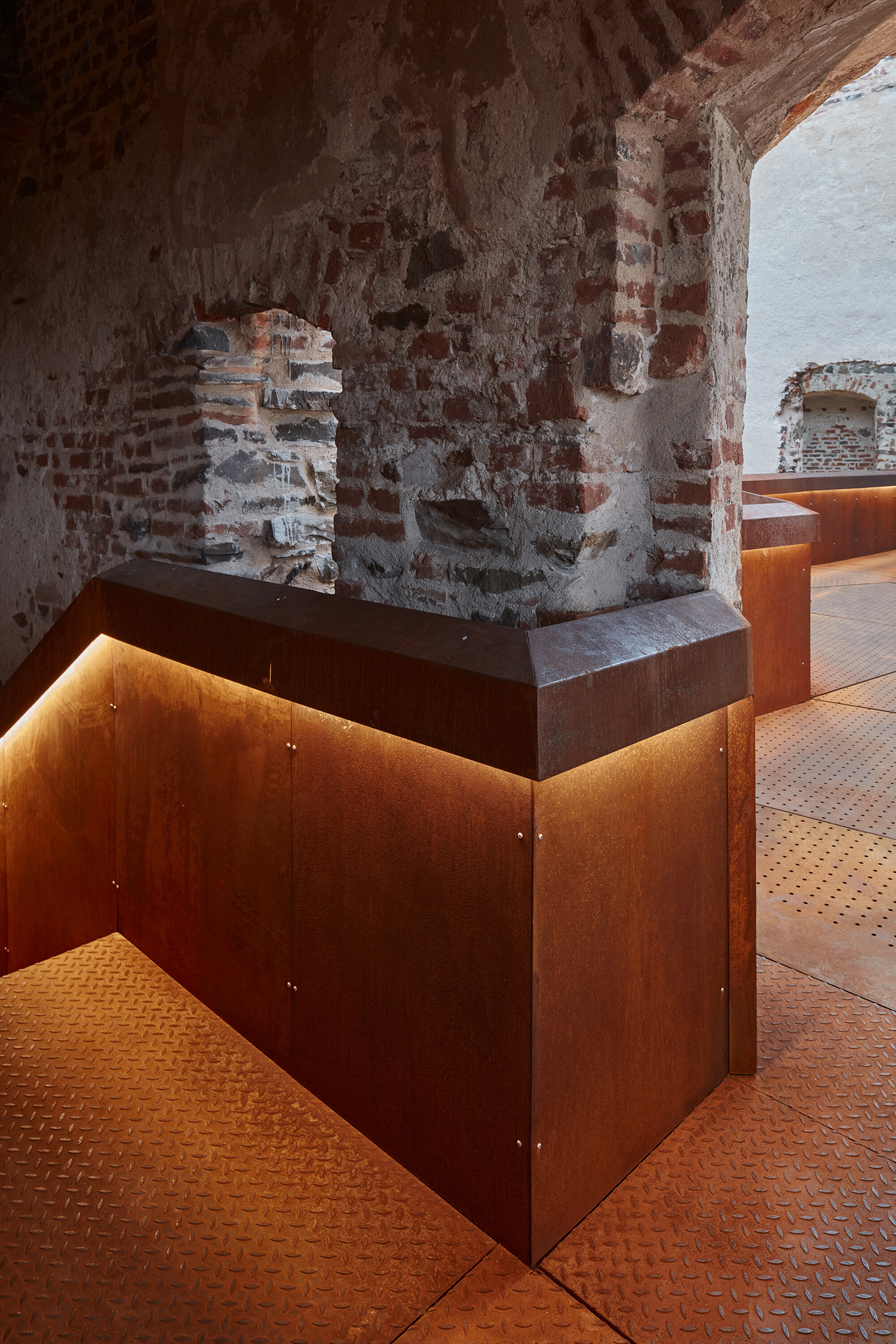 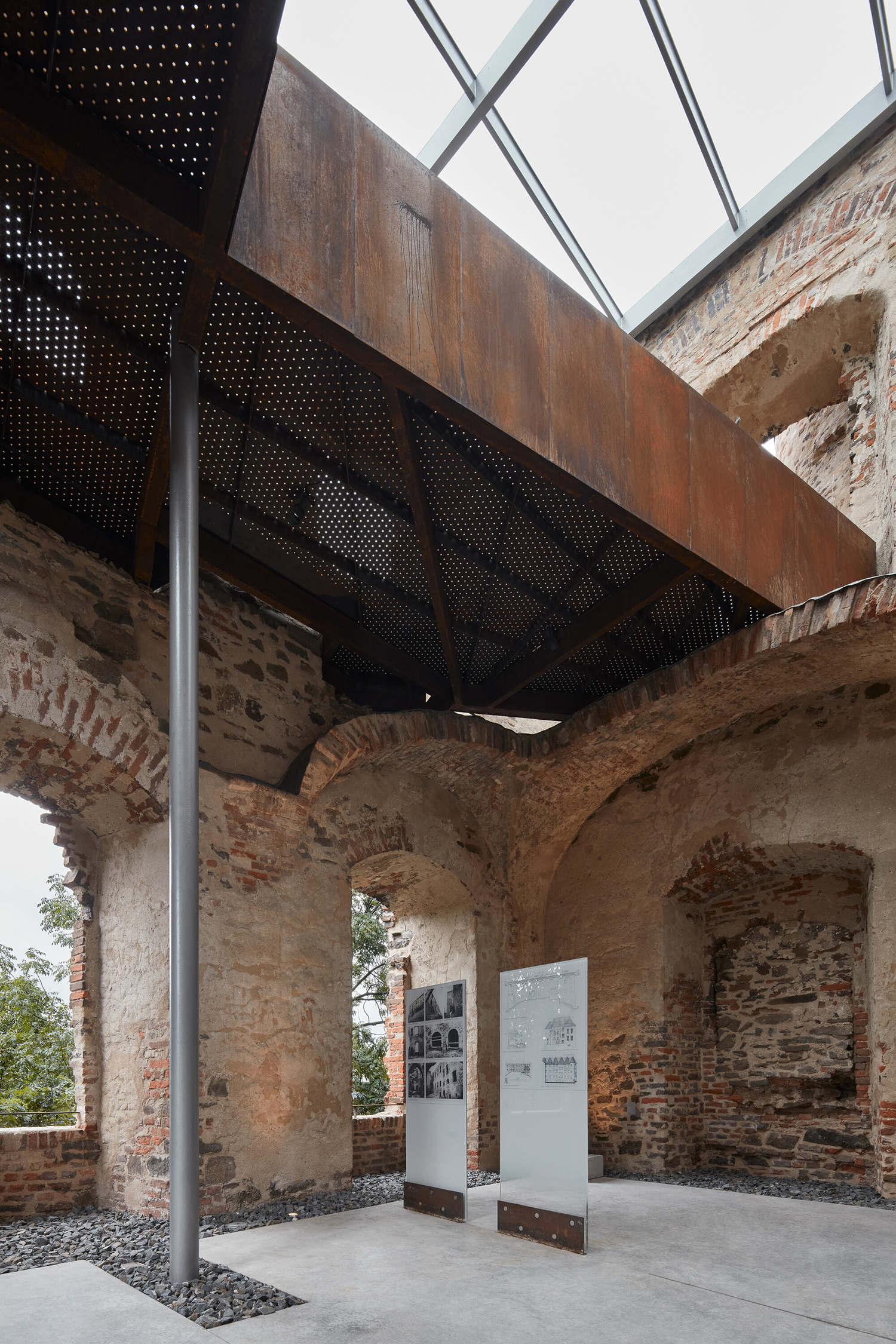 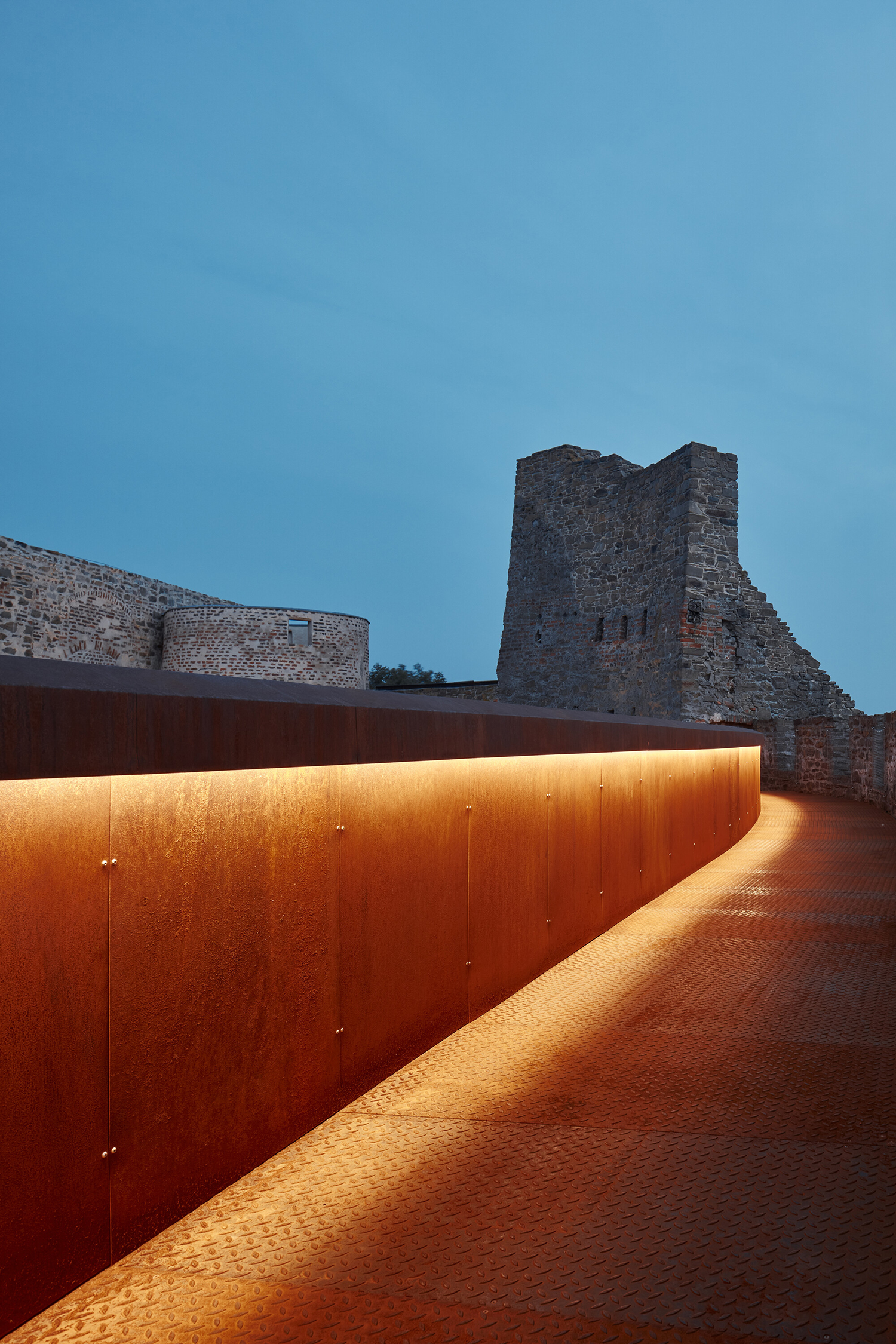 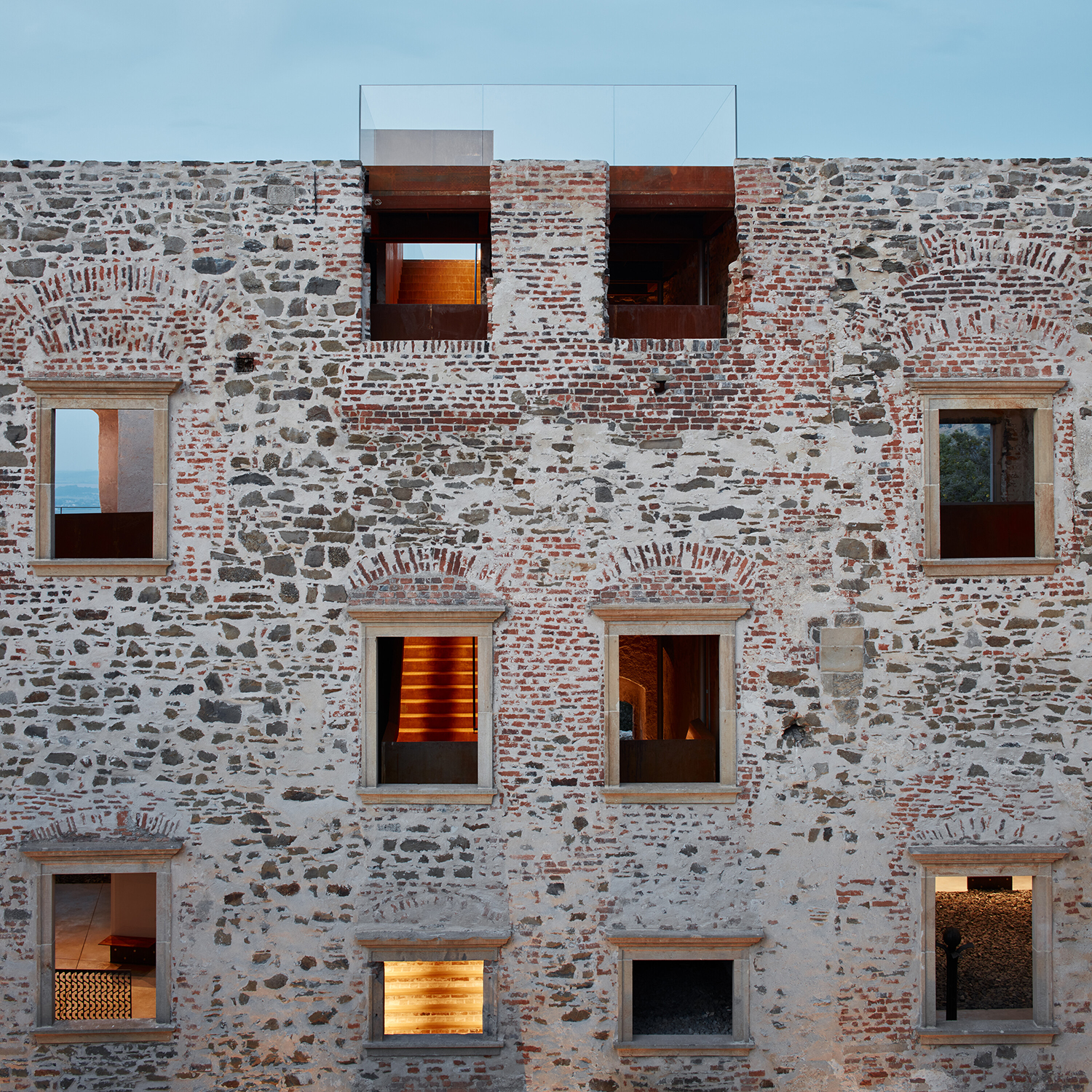