Oslo-based Jon Danielsen Aarhus has designed Cabin Son, a holiday home overlooking Jeløya island in the Oslo fjord on the south coast of Norway. The client wanted a vacation and weekend home for herself and her two young daughters, about an hour away from bustling Oslo where they live. The plot has been in the family for generations, situated between Moss and Son, in an area with many vacation homes as well as permanent residents – most definitely also the case for this area in particular. The size and topography of the plot made it possible to create a building with much privacy, given the suburban character of the area. 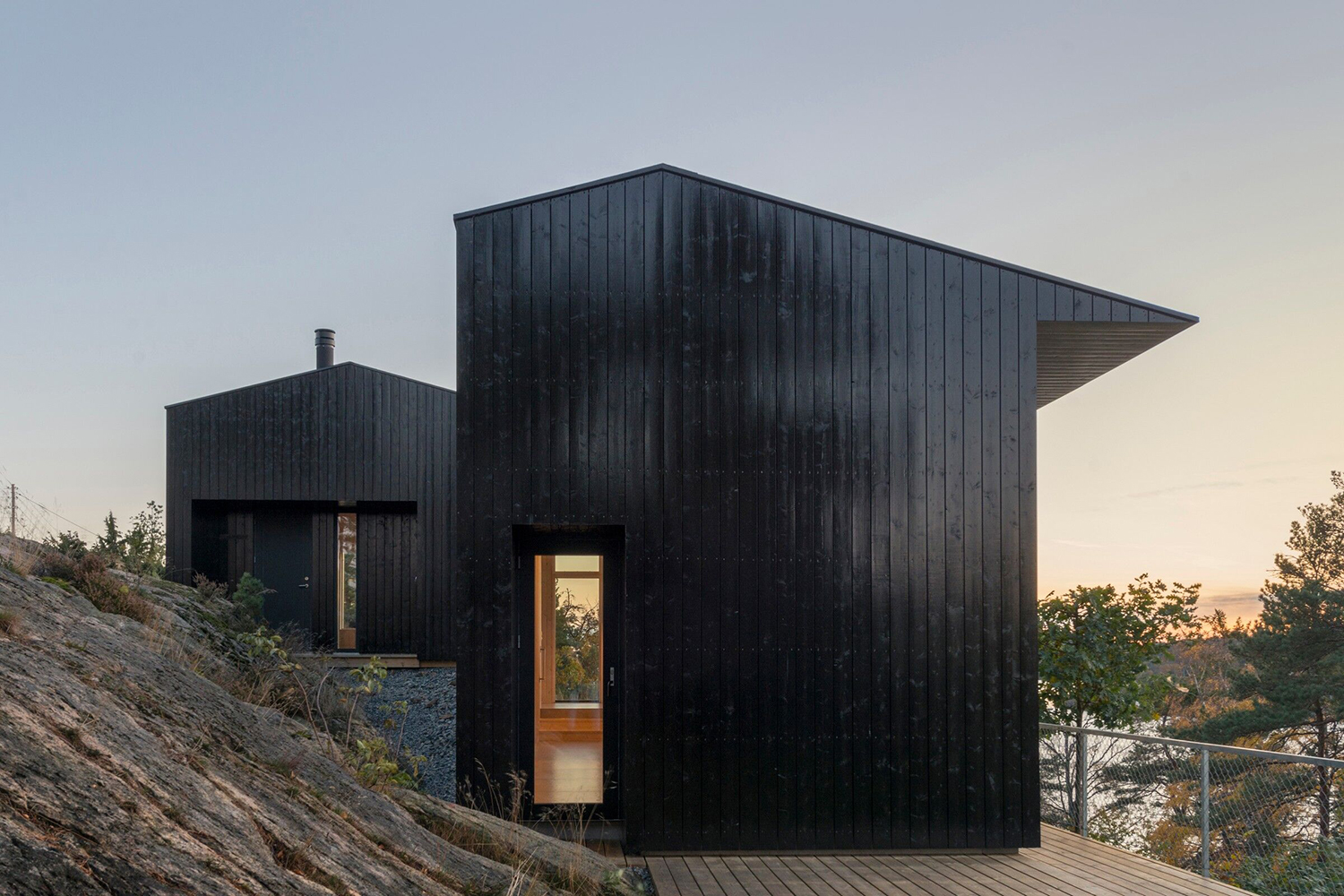 The building is carefully placed on naturally occurring ledges in steep terrain. This makes it lay low and hidden, seen from the arriving side (towards the nearest neighbors), and open up towards the view and the sea. The idea was then to make a low and closed facade on one side, and more exposed on the other.

It was important to not change the landscape with dynamite and leveling of the bedrock (mostly visible or just beneath a thin layer of vegetation). The natural terrain here is beautiful, and it would be a shame to blow it all away. 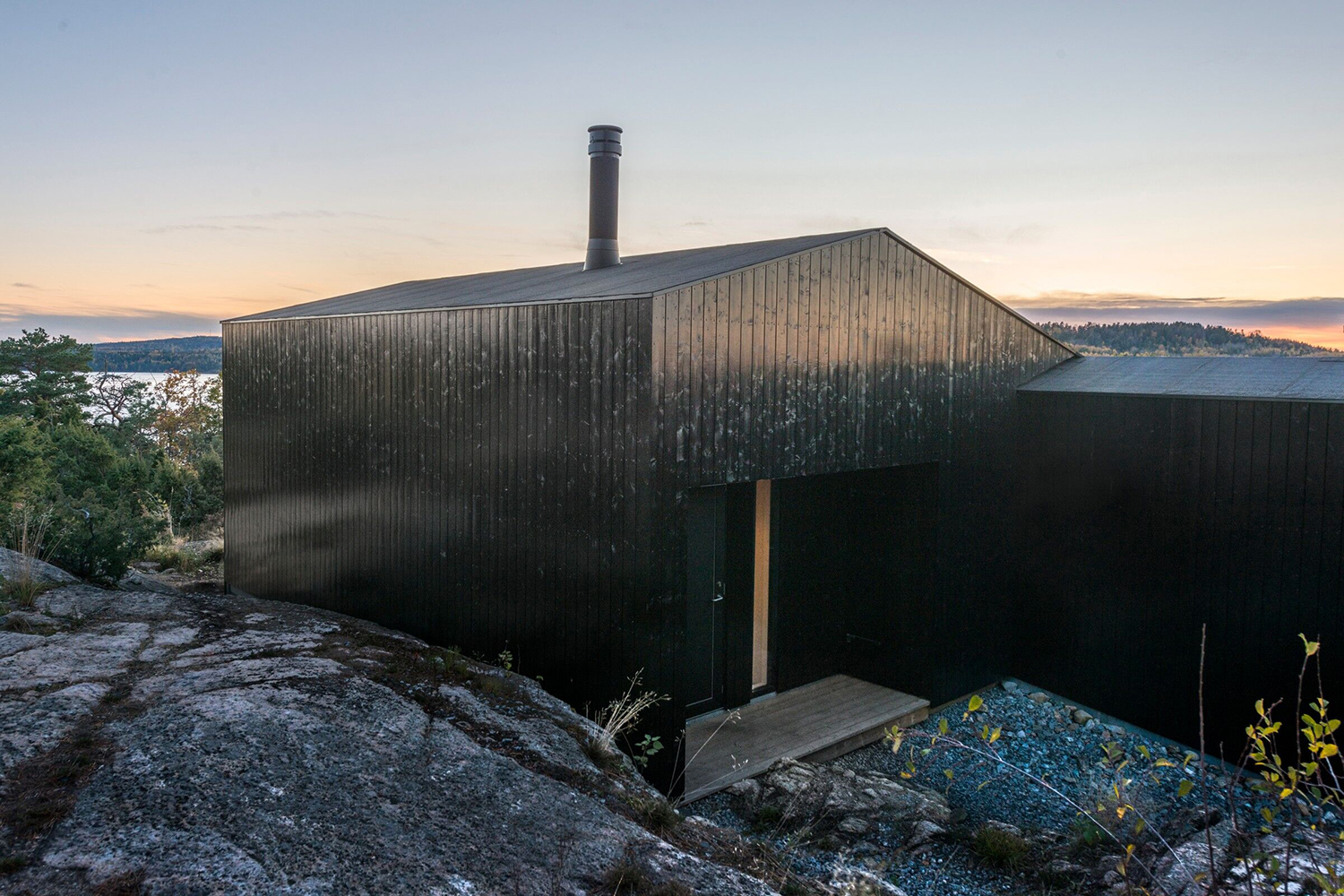 Inspiration was drawn from a minuscule, existing cabin on the plot – both on how to relate to the landscape and orientation of the building, but also color scheme, roof angle, and special building elements such as the «bridge» in front of the building. The existing cabin will function as an annex to the new building, and they should relate to each other in a good way, visually and spatially. A door opens from the new cabin, to the outside area between the two buildings. 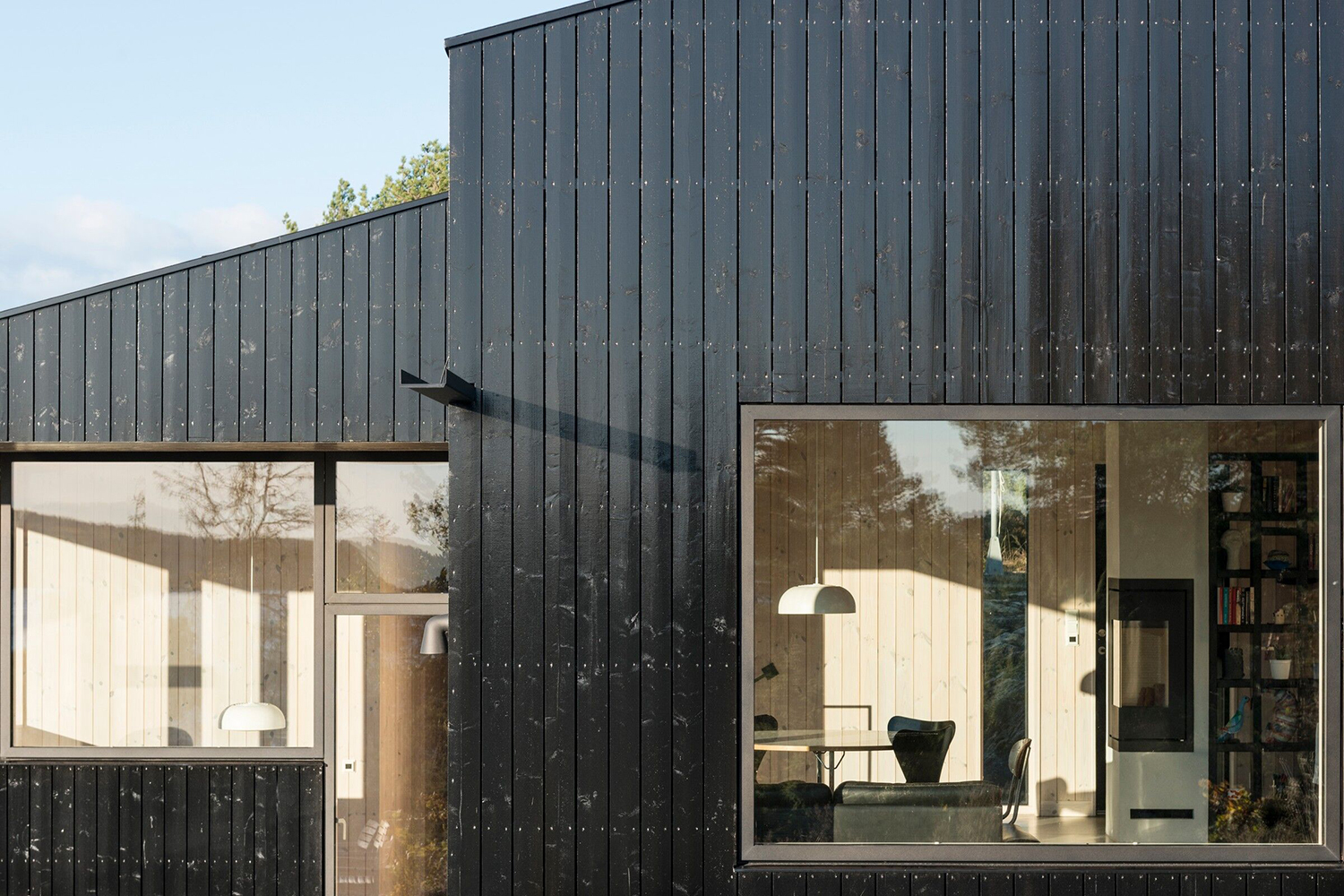 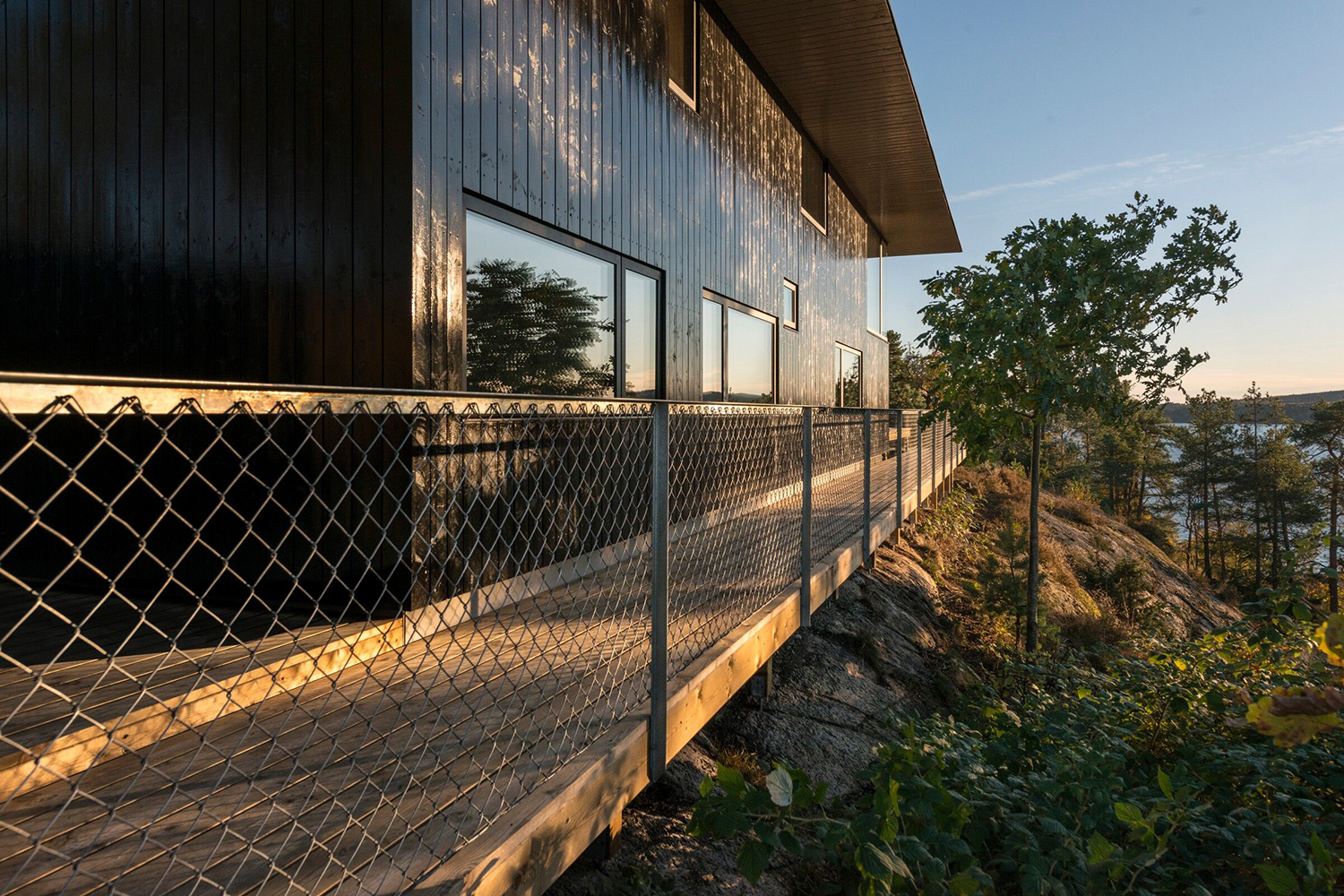 The cabin has a large kitchen/living room area, plus a smaller, additional living room, 3 bedrooms, 1 bathroom, and a large loft for extra sleeps. In addition to the sheltered outside space between the new and existing building, there is a new terrace facing the south-west. The long bridge on the west facade, stretching the full length of the building, connects the two outside spaces. 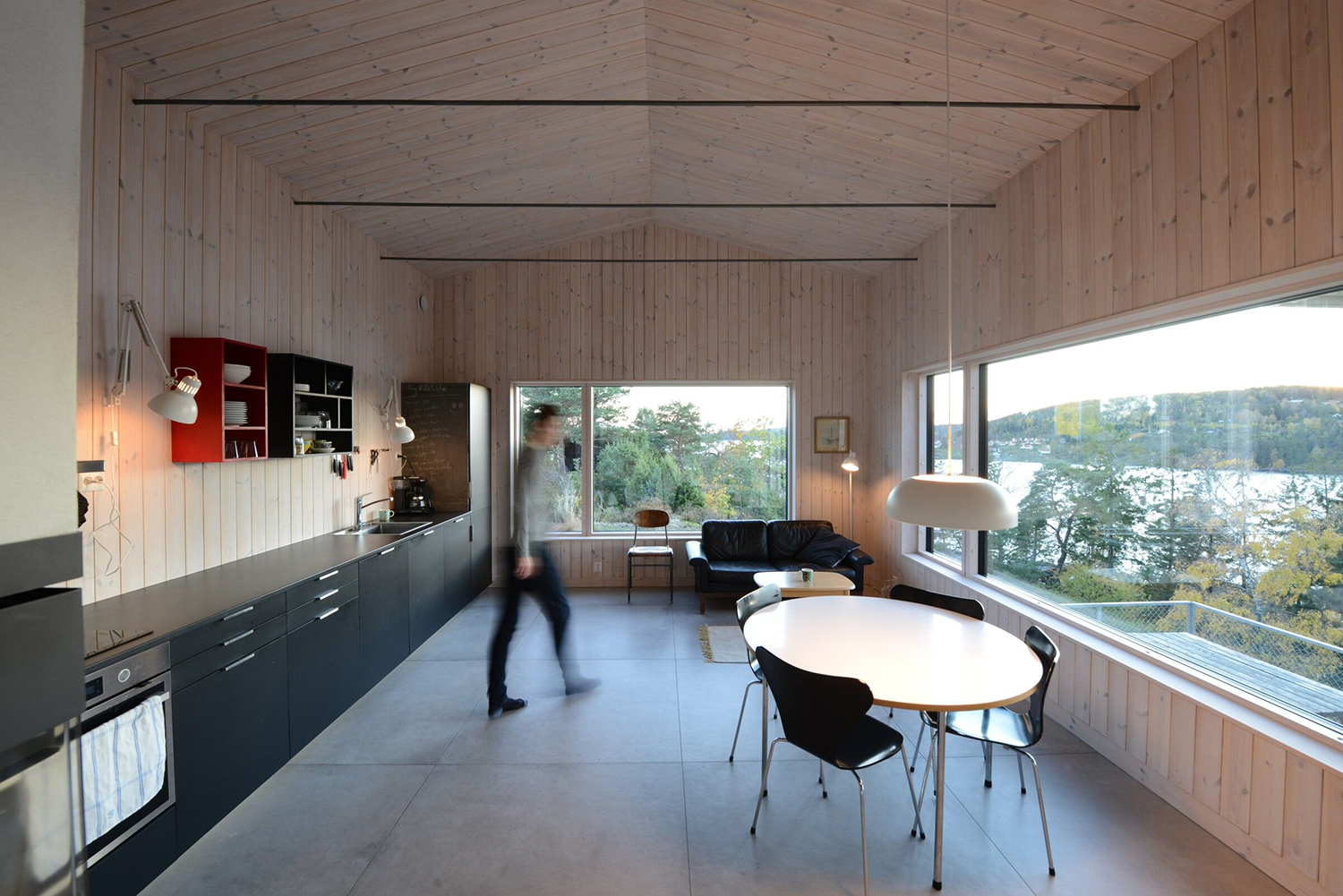 The cabin is clad in spruce, inside and out. This particular type of outside cladding is called barn cladding(låvekledning) in Norway — vertical wooden boards with a rectangular cross-section, and more importantly – generous spacing between the boards. This would allow air to flow through the barn and dry the stored hay. But for this building it allowed all the vents for natural ventilation to be hidden behind the cladding, making a more uninterrupted exterior, visually. 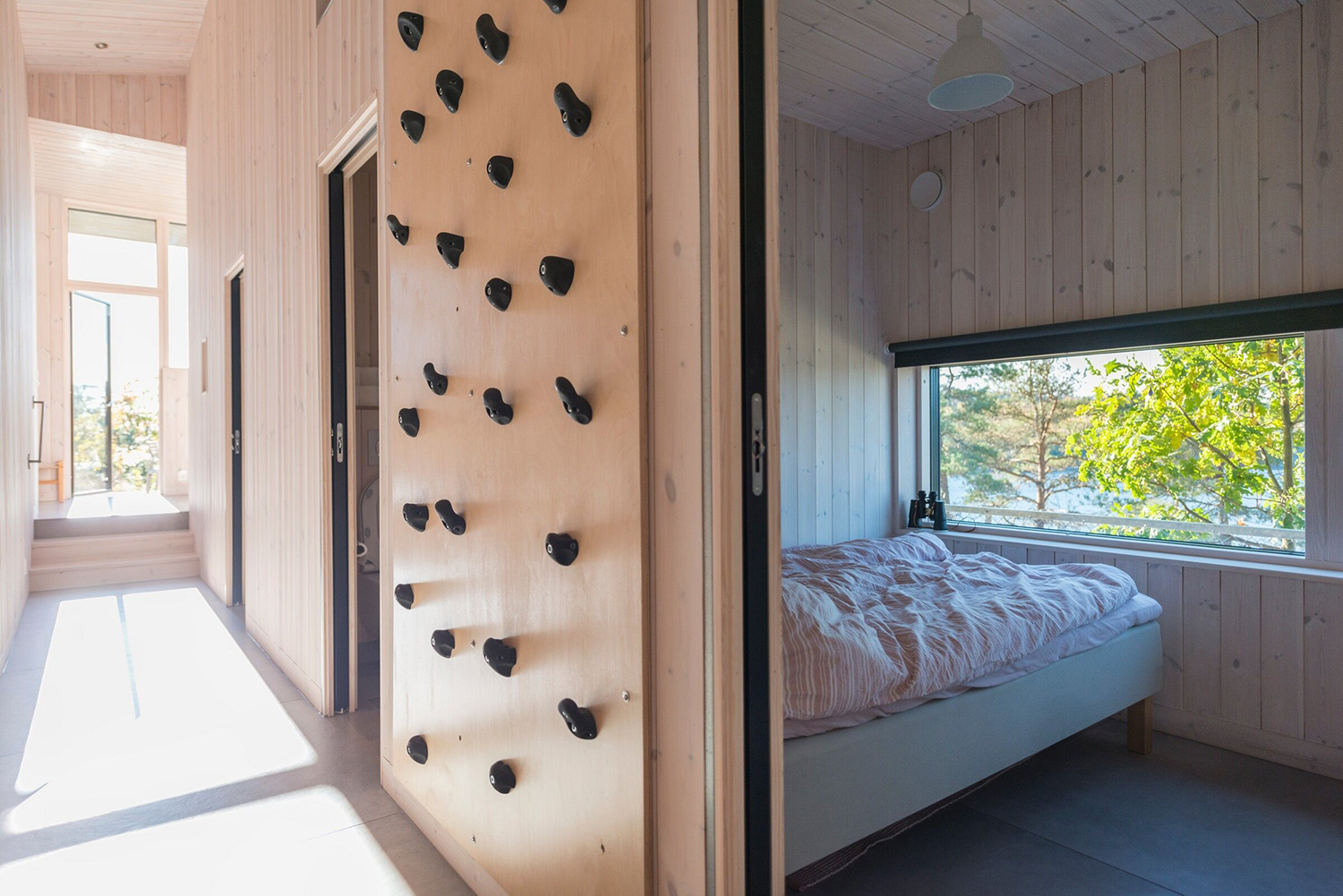