NEW HOW Architects has recently completed its weekend house Nové Hamry among the Czech Republic’s Ore Mountains. The house stands only a few meters from the edge of the forest, from where it grows up towards the tops of spruces. Nestled among the trees, almost hidden compared to other white plaster houses next door, it almost looks as if it has been swallowed up by forests. 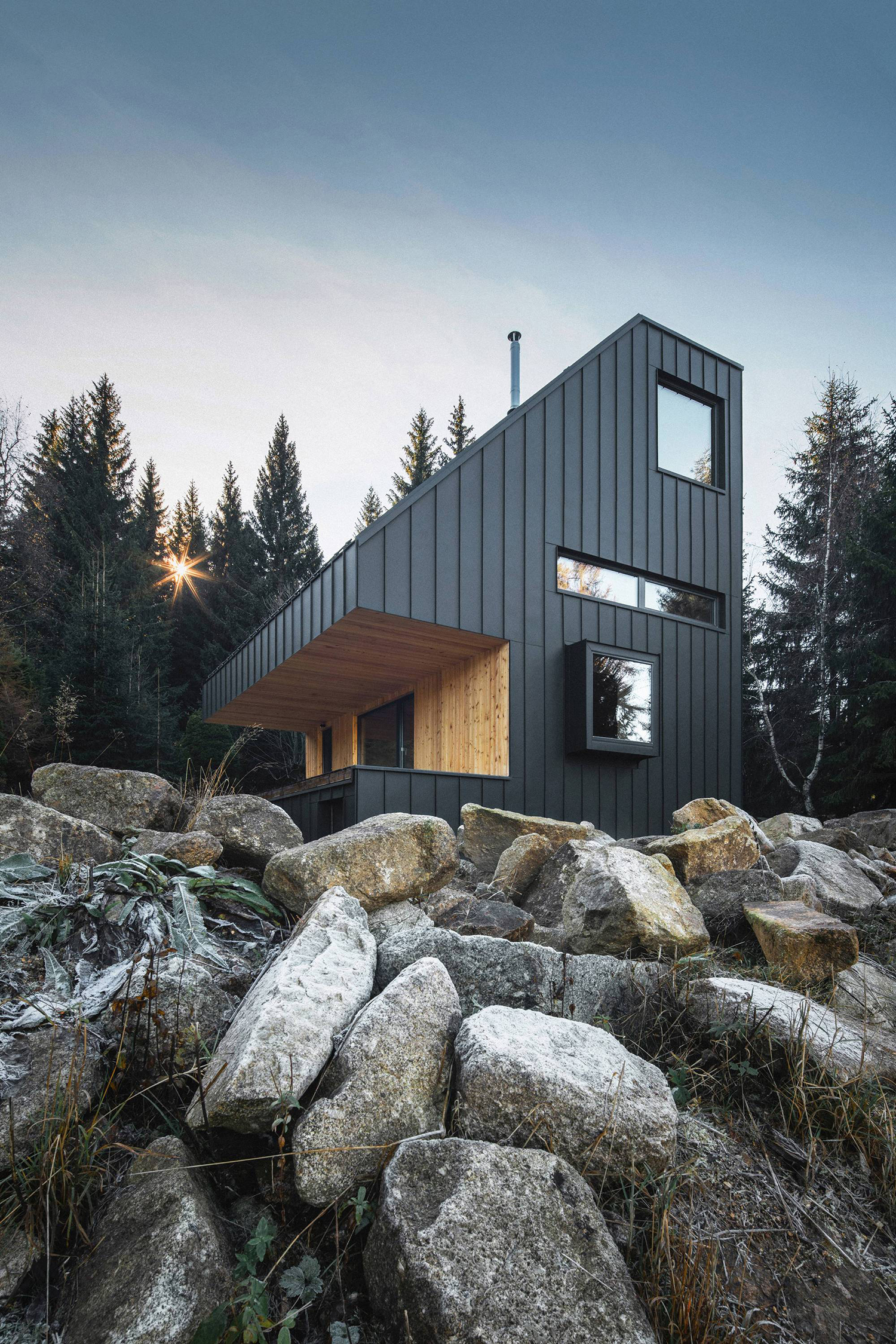 The design is based on the local nature and color, in which you can find all shades of gray. You can see gray in the shades of trees, in granite and basalt rocks, and even in the dark green needles and trunks of the local spruces, which are so typical of the forests of the Ore Mountains. From the beginning, it was clear that the facade and roof of the holiday home should be covered with aluminum in a similar dark color. The façade structure was used to create an intense rough surface that vaguely resembles oiled black wood and slow-growing spruce trunks. However, its color and surface are not the only striking aspects of this house. 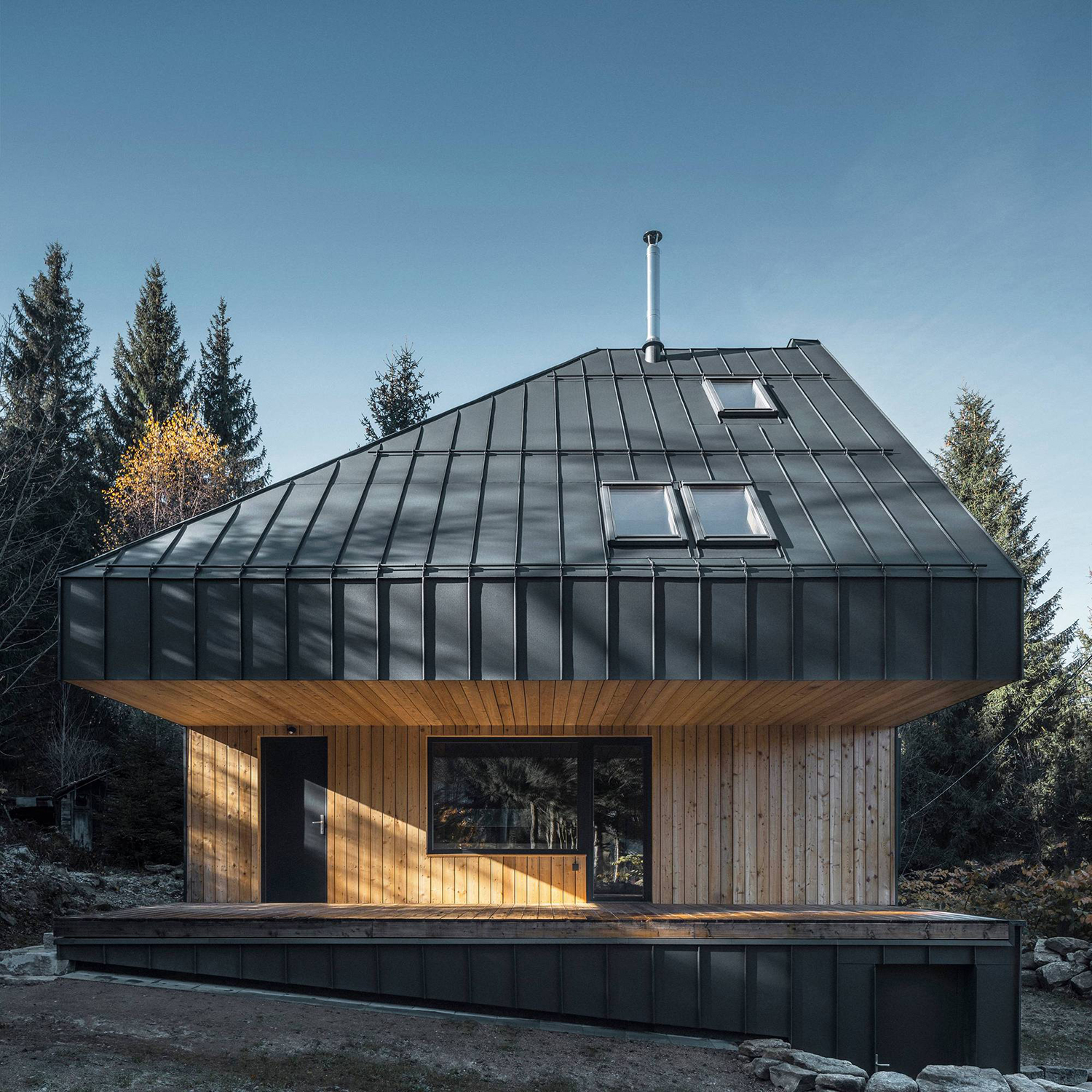 From a formal point of view, the new building is represented by an aerodynamic but angular figure, where classic elements, such as the roof and the wall, give way to a clear shape and merge with each other. The appearance was created through many precisely set spatial scenes of the interior and on the basis of seasonally changing local climatic conditions, as the snow load in winter requires the choice of a steep roof angle. 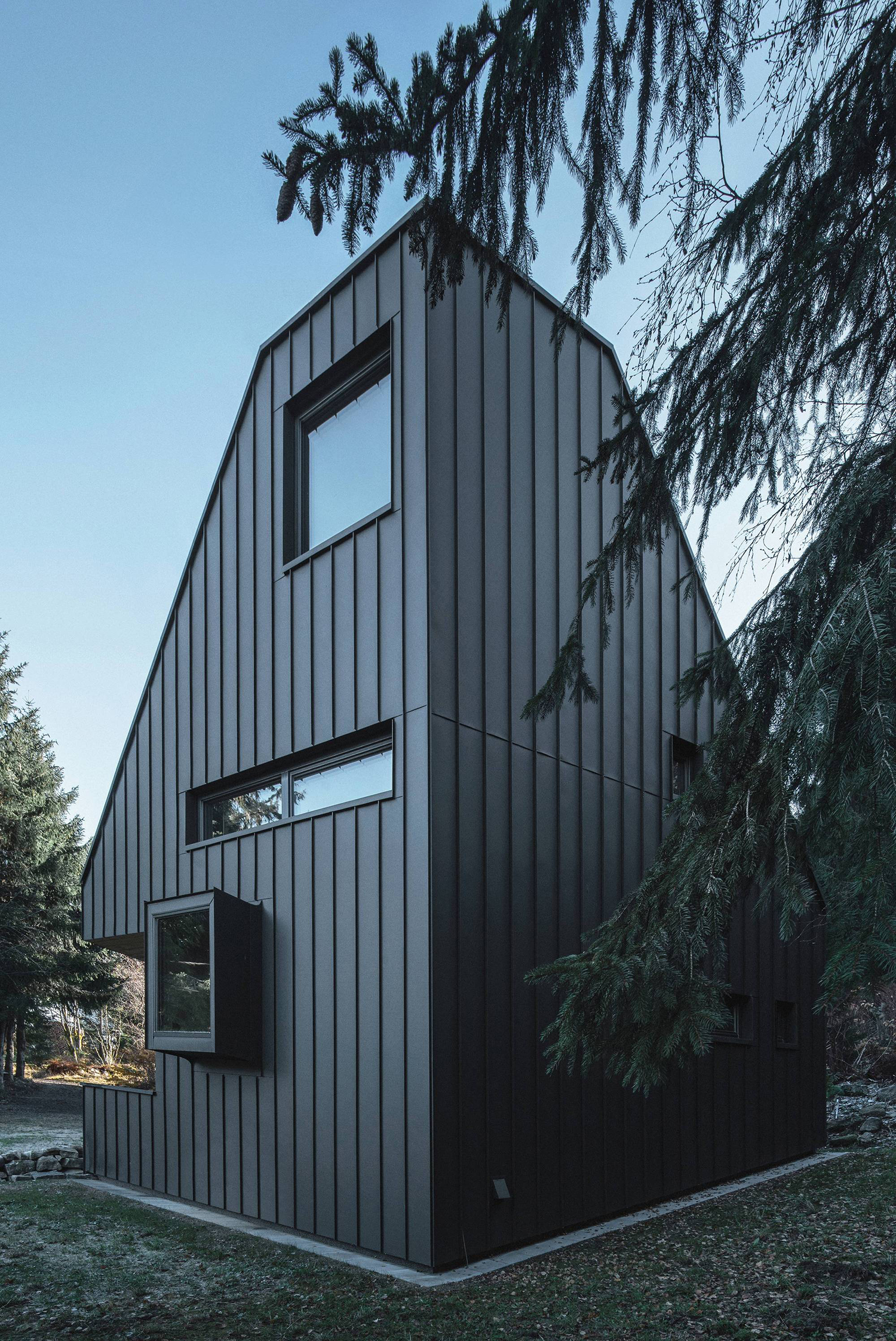 The idea of a “lookout tower” also determines the height of the house from the inside. It should resemble a tower rather than a house and should also serve as a hideaway. Instead of the usual two floors, three levels of action were created – each with its own character. At the highest level, the house serves as a studio, library and also as a refuge. At this point, it is possible to let thoughts fly. A square window with a side of 2.5 m long frames the view of the treetops, the sky and the landscape. One floor lower, in addition to the bathroom and the open gallery space, we can also find sleeping corners here. 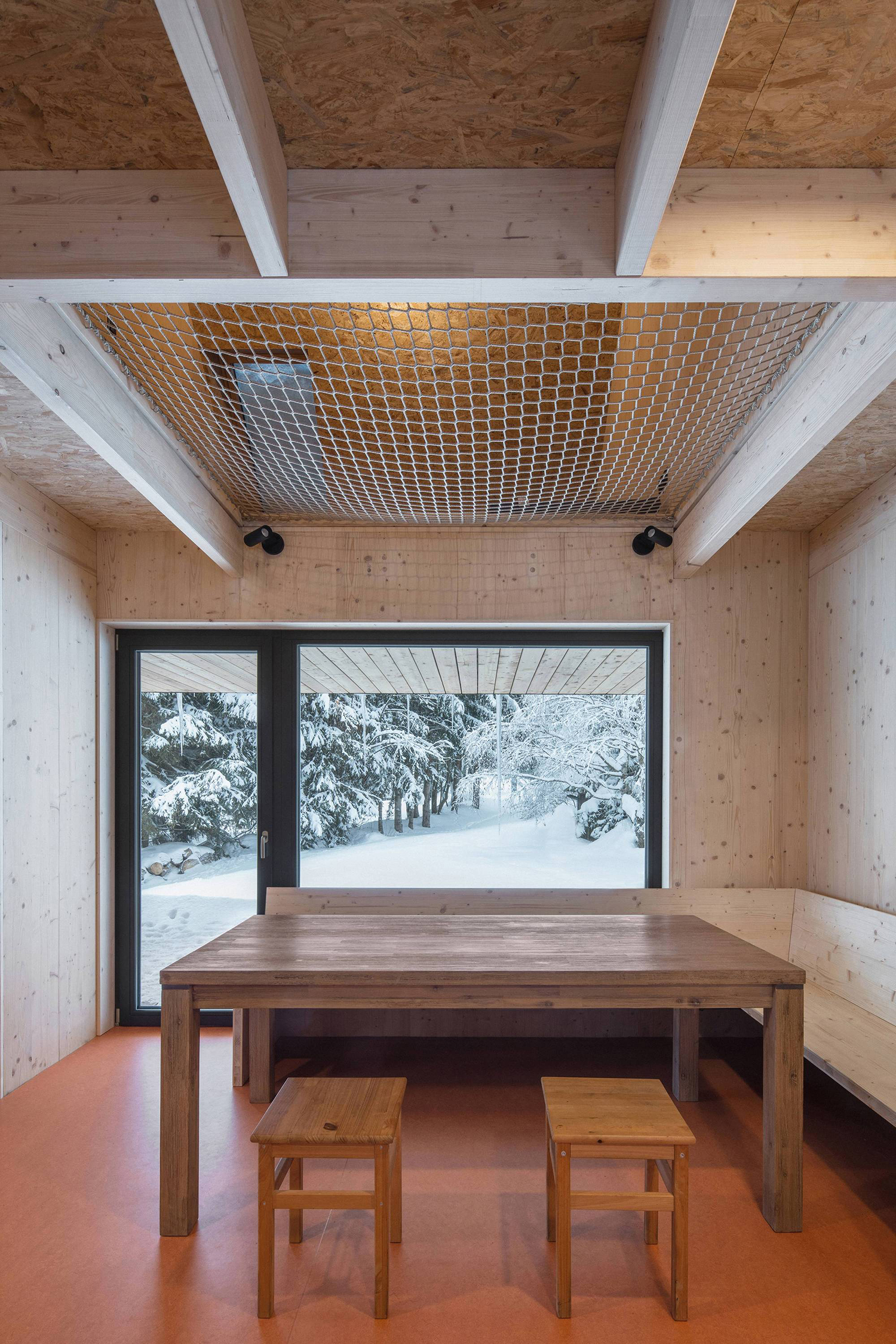 The floor is partly formed by a net that establishes a connection with the lowest level both visually and acoustically and functions as a rest area. It’s a place where you can unleash your imagination. Sitting in a net and not having solid ground underfoot has something to do with the dream of flying, as well as looking up at the sky. The lowest level of the house is dominated by the main social area with a kitchen and a central fireplace – a place of meeting and lively conversation. The technical background is located in a partially sunken basement. 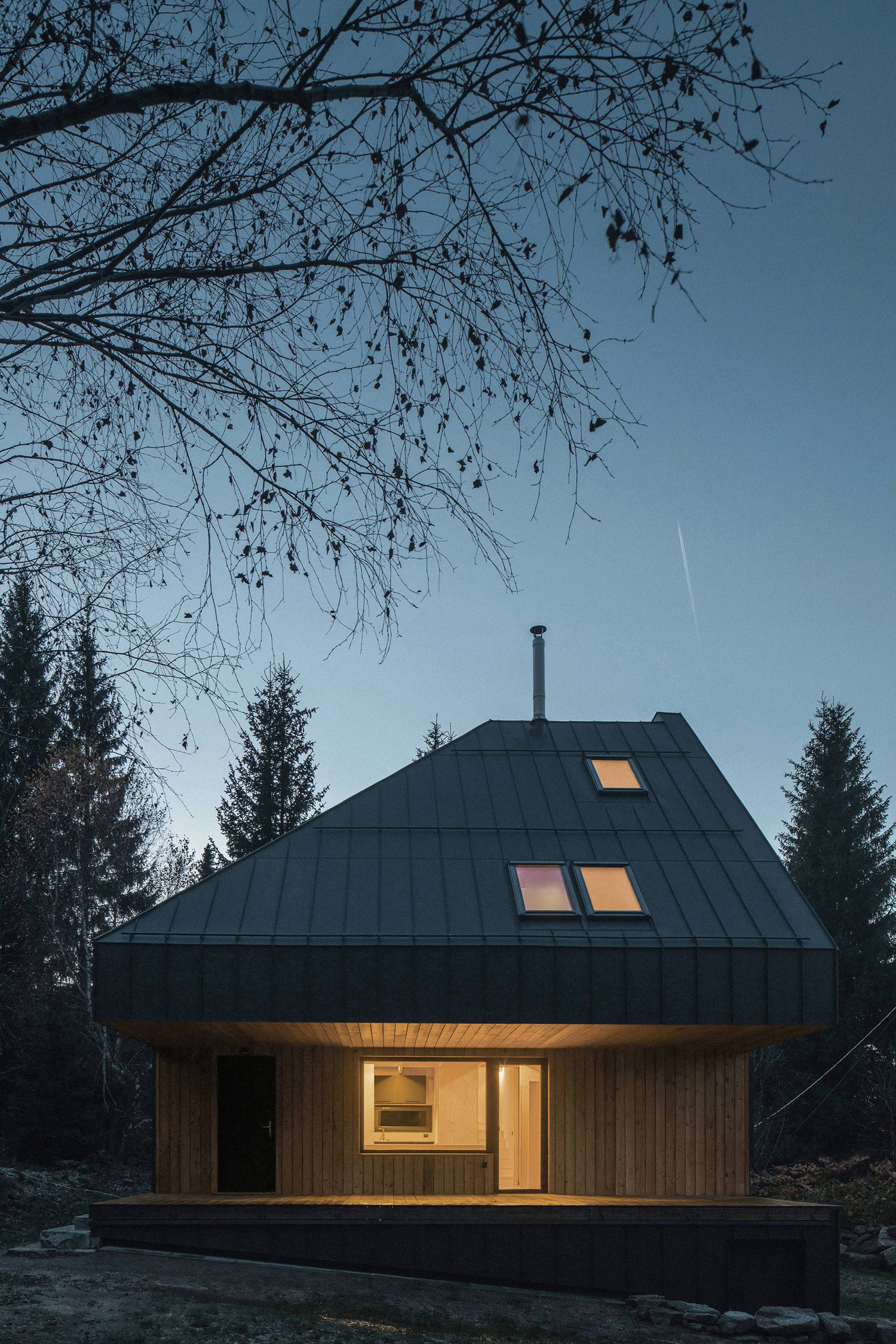 In the near future, the house will be inhabited throughout the year. For this reason, the house already has places to sleep for at least ten people. In addition, the energy concept of the house should be expanded in the future as well. It is currently heated by an open fireplace and electricity. In addition, the house is already equipped with connection points for the rooftop photovoltaic system and for vertical wind turbines that help realize the idea of energy self-sufficient life. 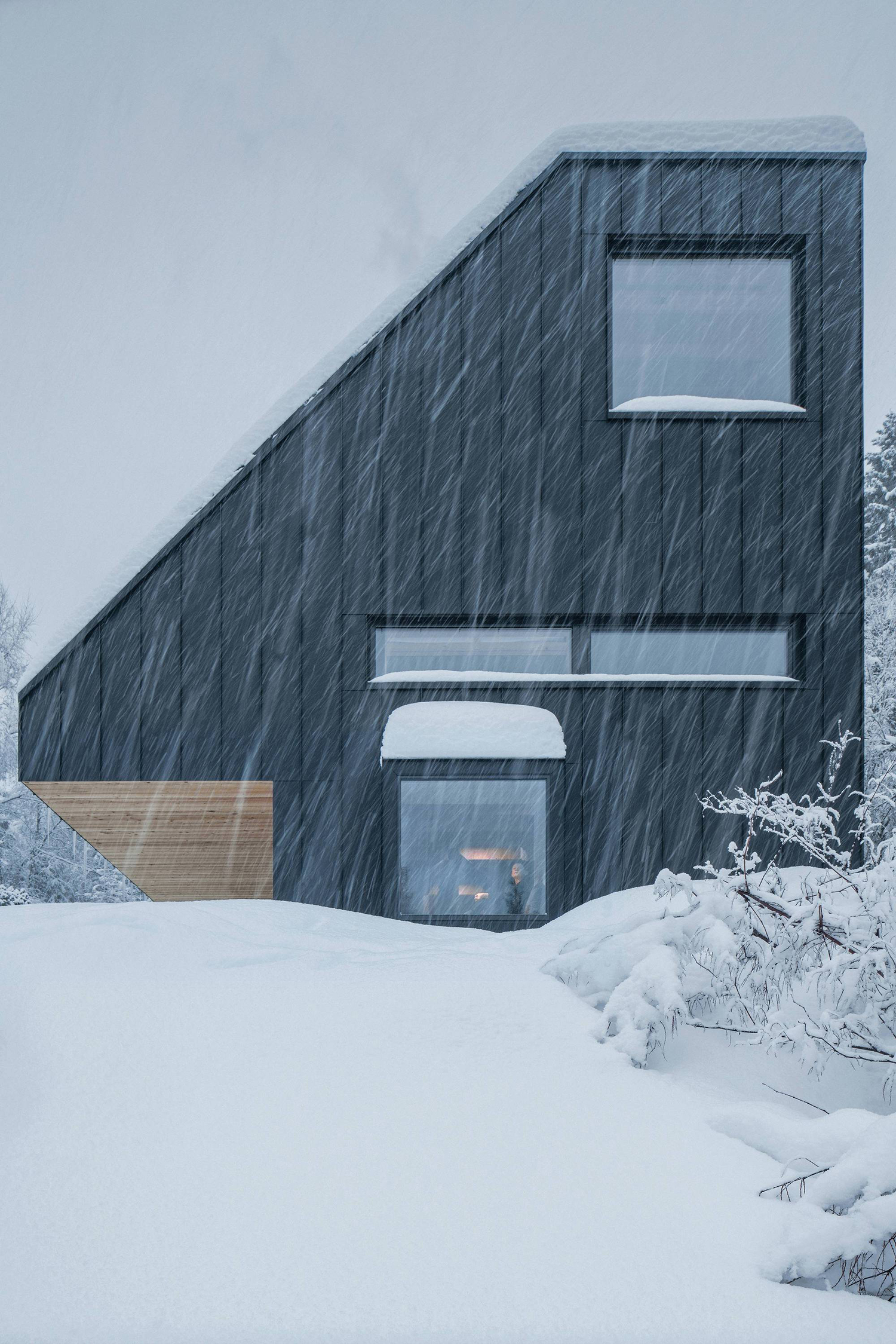 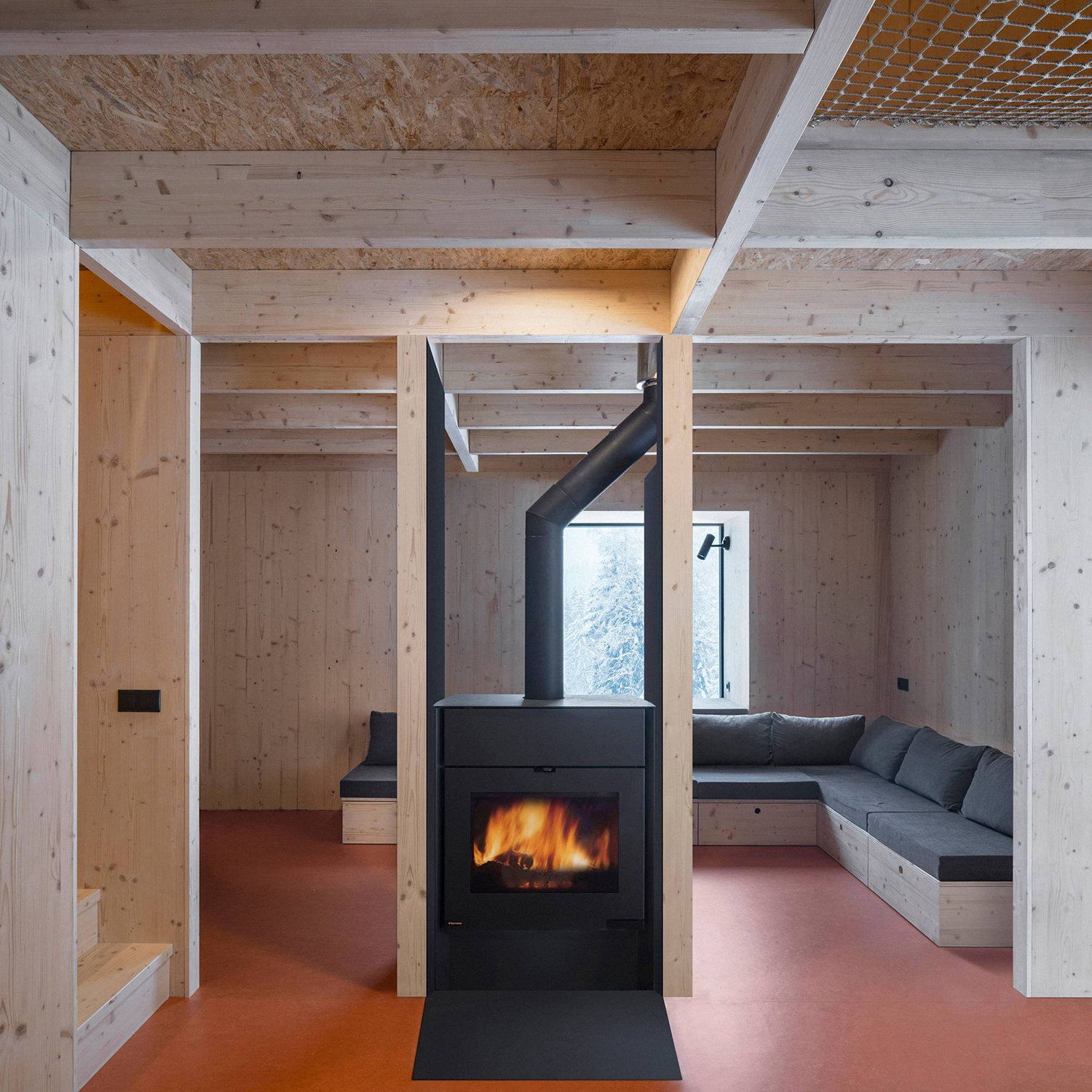 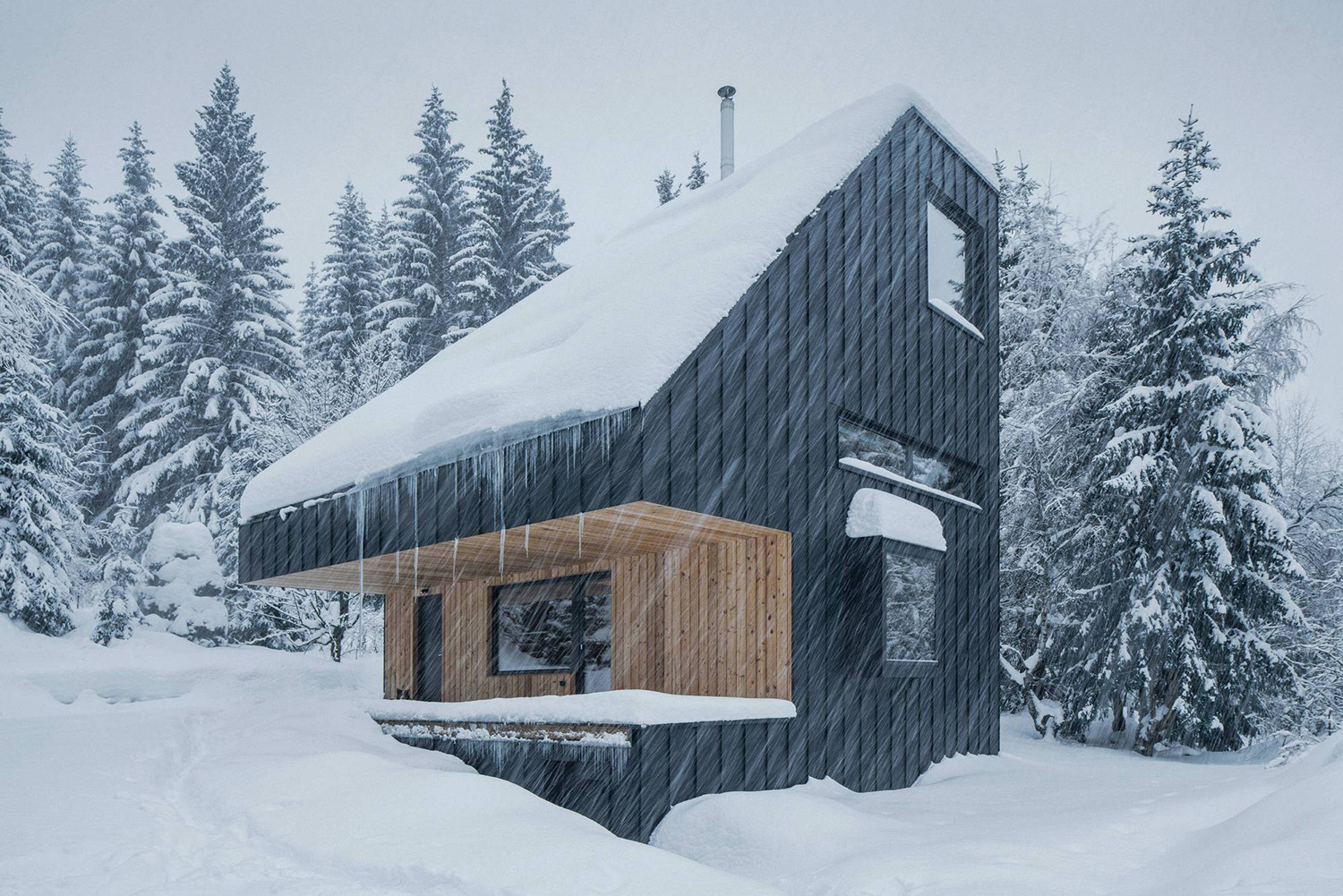 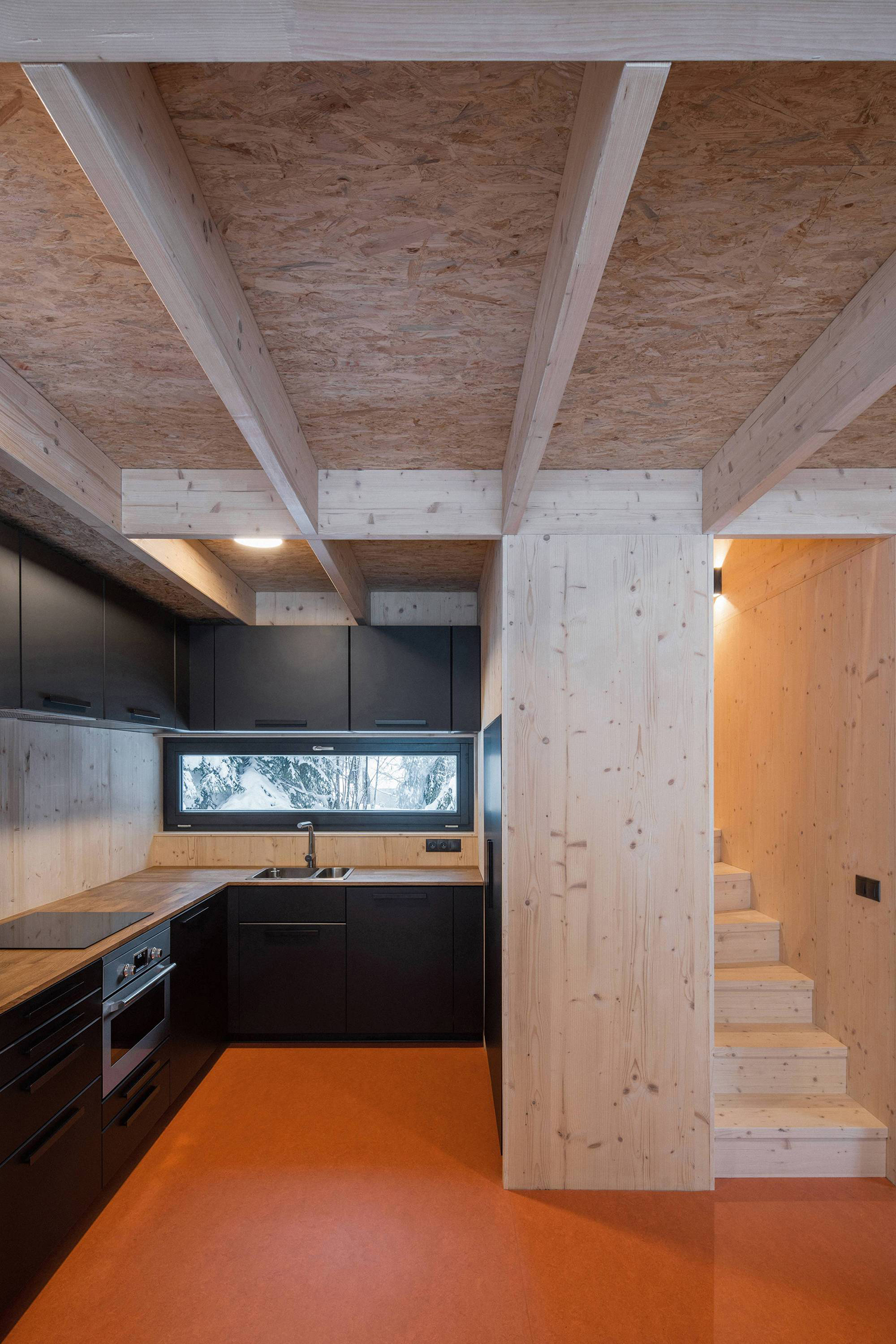 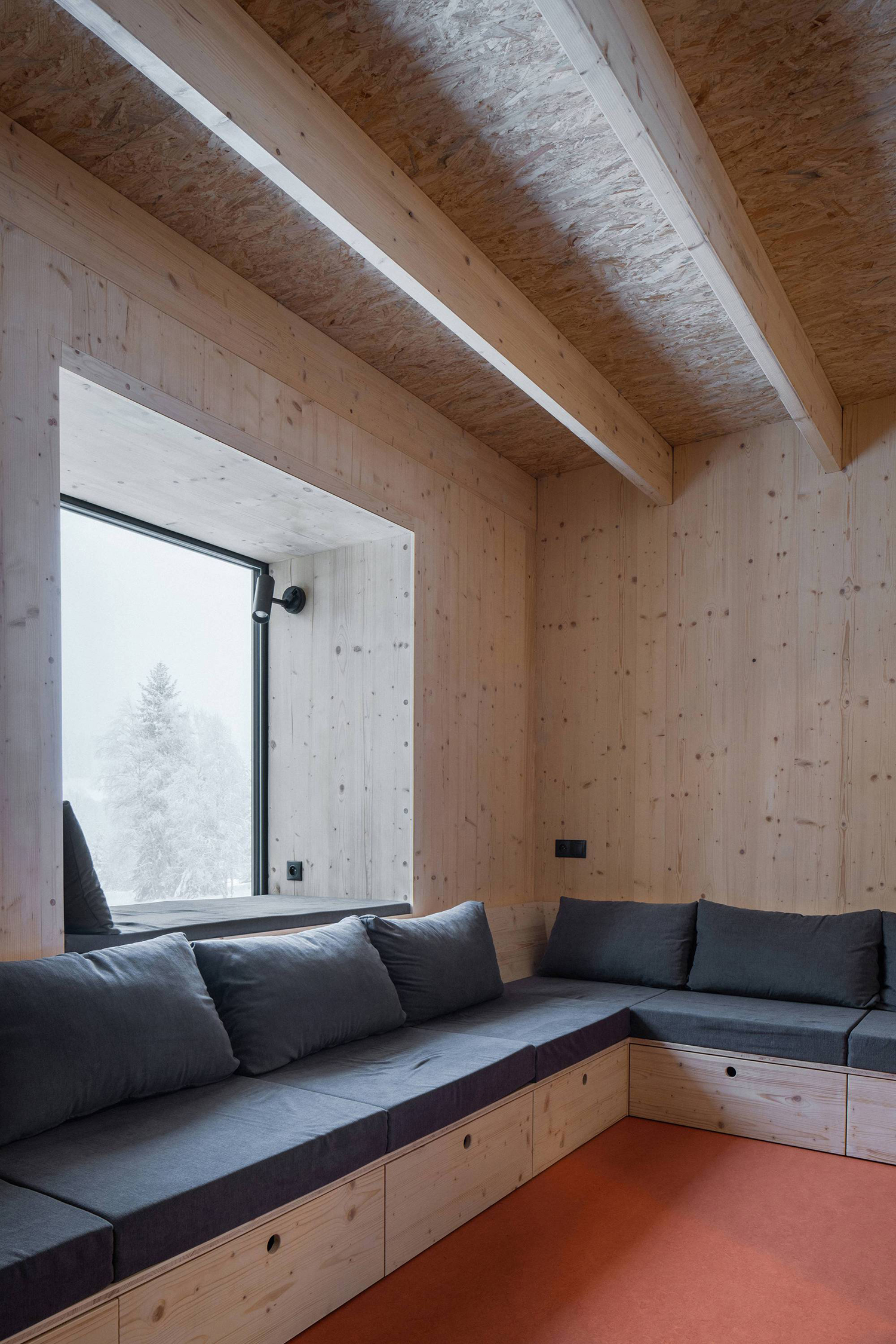 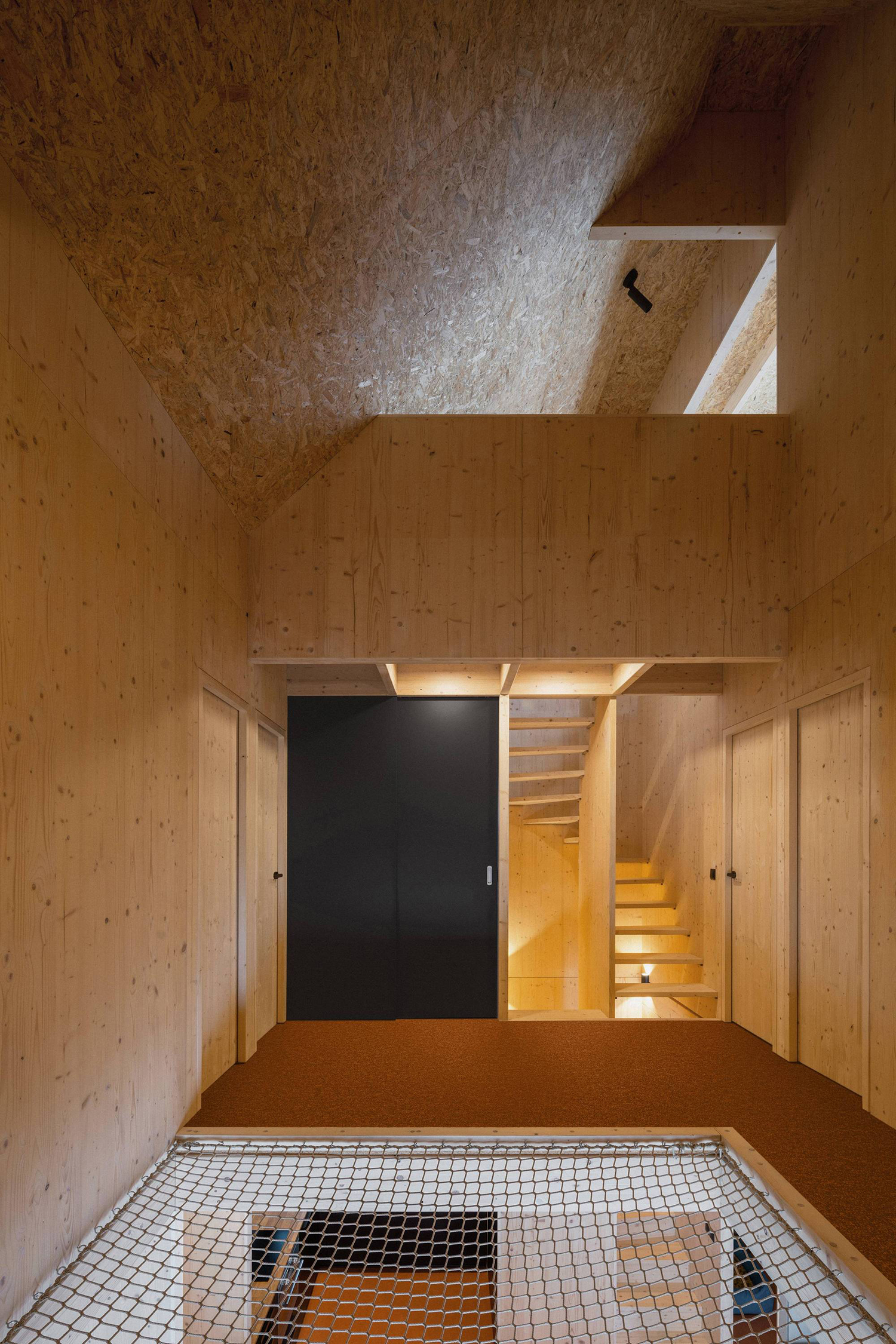