W-mills by Wutopia Lab has recently designed the Shanghai Metro Line 15 Wuzhong road Station, which was open to the public right before the Chinese new year of 2021. “I have visited subways in many countries, old, beautiful, new, and shabby, the subway seems to be a functional place, where people come and go, eat something, or advertise,” said Wutopia Lab’s lead architect Yu Ting. “The occasional entertainer can briefly turn the subway space into a warm spot, after which people come and go again.”

“I see this as an opportunity to turn the subway hall into a social space,” continues Yu Ting. “Especially after the great quarantine during the pandemic outbreak, I felt that socializing was valuable. The subway is not just a functional space, it can be a symbolic social space, the symbolism will form a topic of conversation on the scale of the city of public opinion; it can be a symbolic cultural space-like social space, the topic can give rise to more understanding and ideas and urging of the city.” 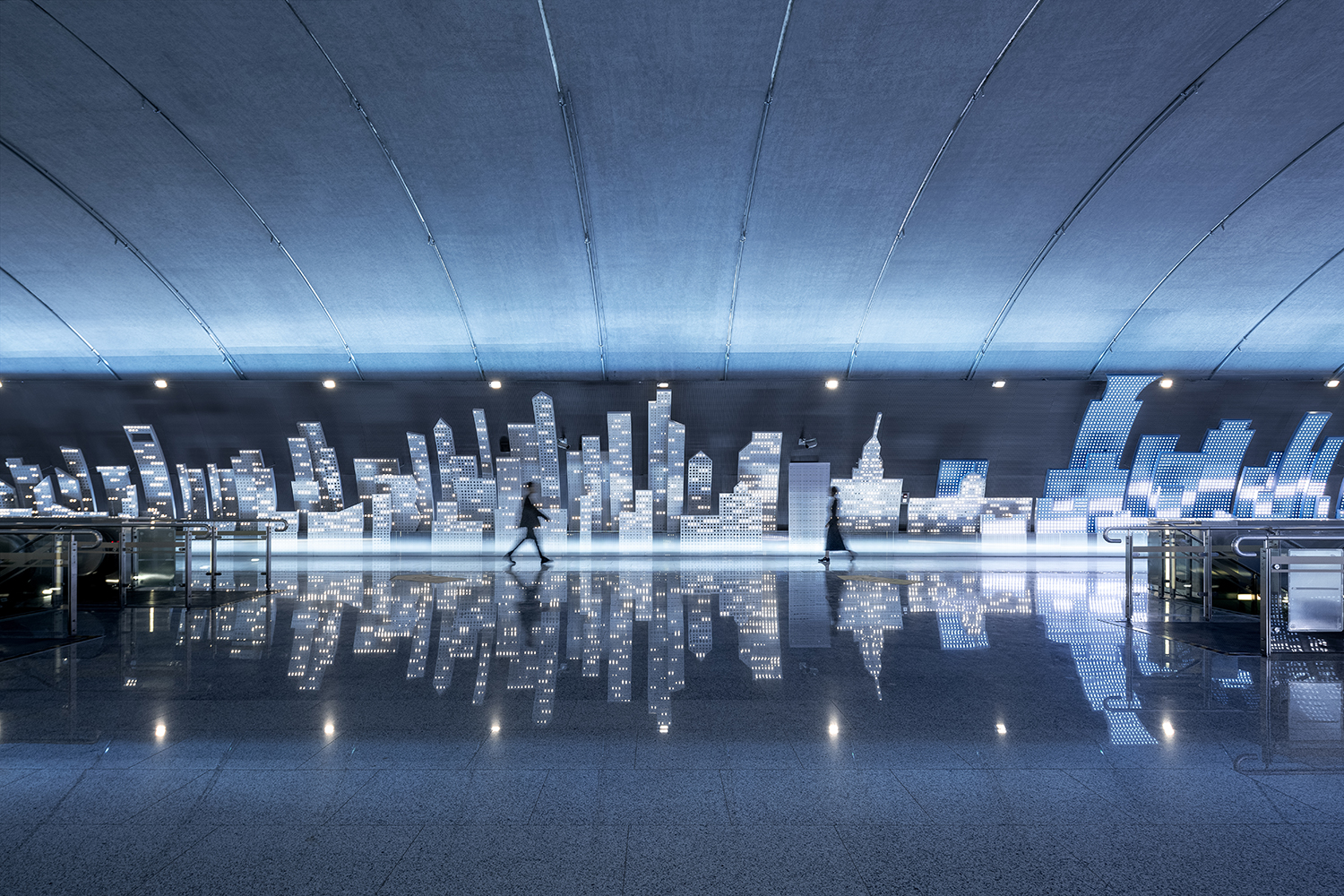 Shanghai‘s foundation was unsuitable for metro construction, but it ended up being the city with the longest-running mileage of subway in the world. The continuous extension of the subway has driven the rapid expansion of Shanghai’s urban areas as well as its prosperity. Based on this, an idea naturally came to mind. If the ground level of the station hall is seen as the Huangpu River, then it should be flanked by the spectacular city scenes of Pudong and Puxi, and the two ends of the hall should reflect the magnificent future of Shanghai. The architects needed to express this symbol in an abstract figurative visual image and effectively convey it to the citizens with a simple expression. 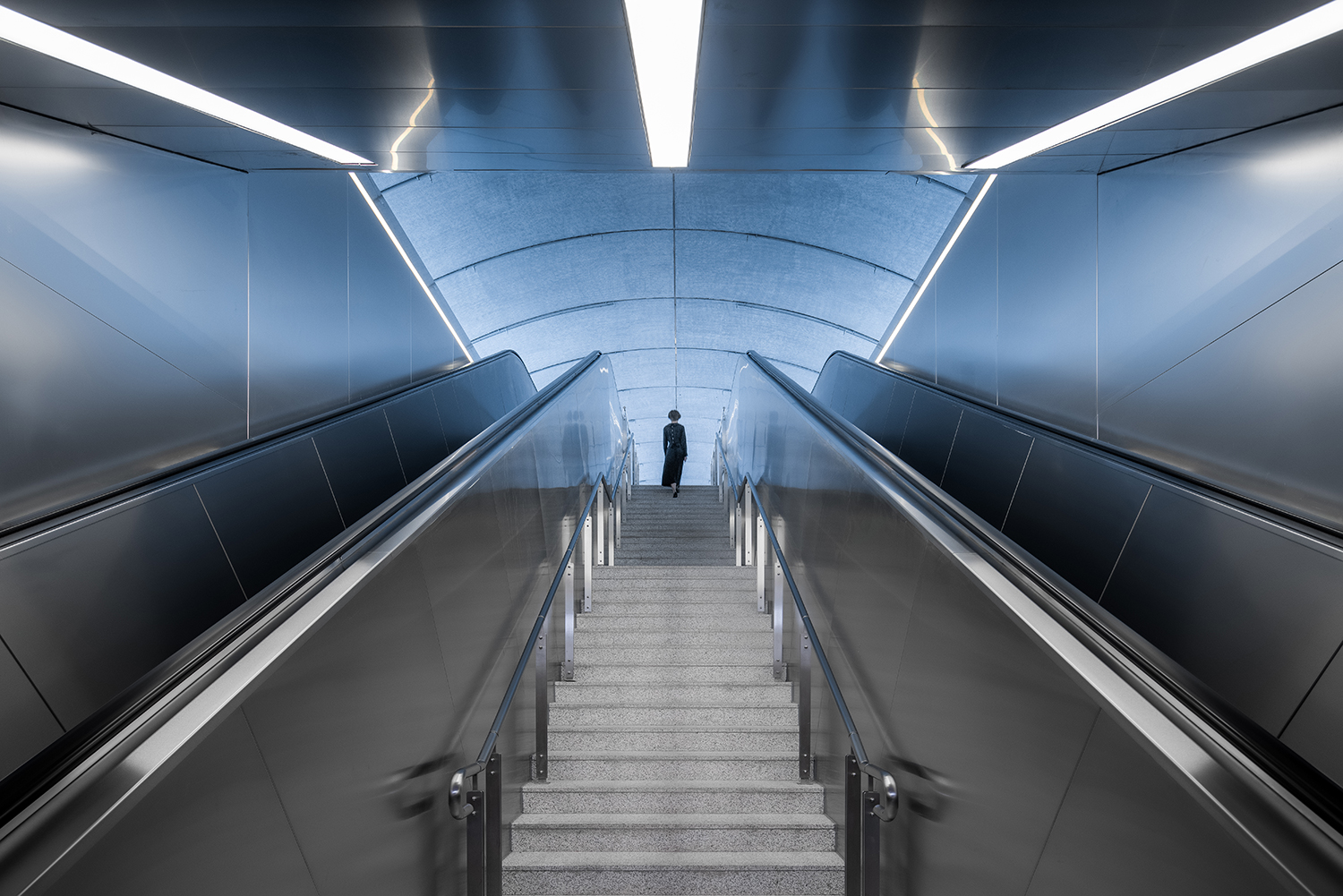 Therefore, the Wuzhong Road subway station hall is a new type of urban public social space that symbolizes Shanghai’s construction achievements with an abstract figuration of minimalism, like an exhibition hall. 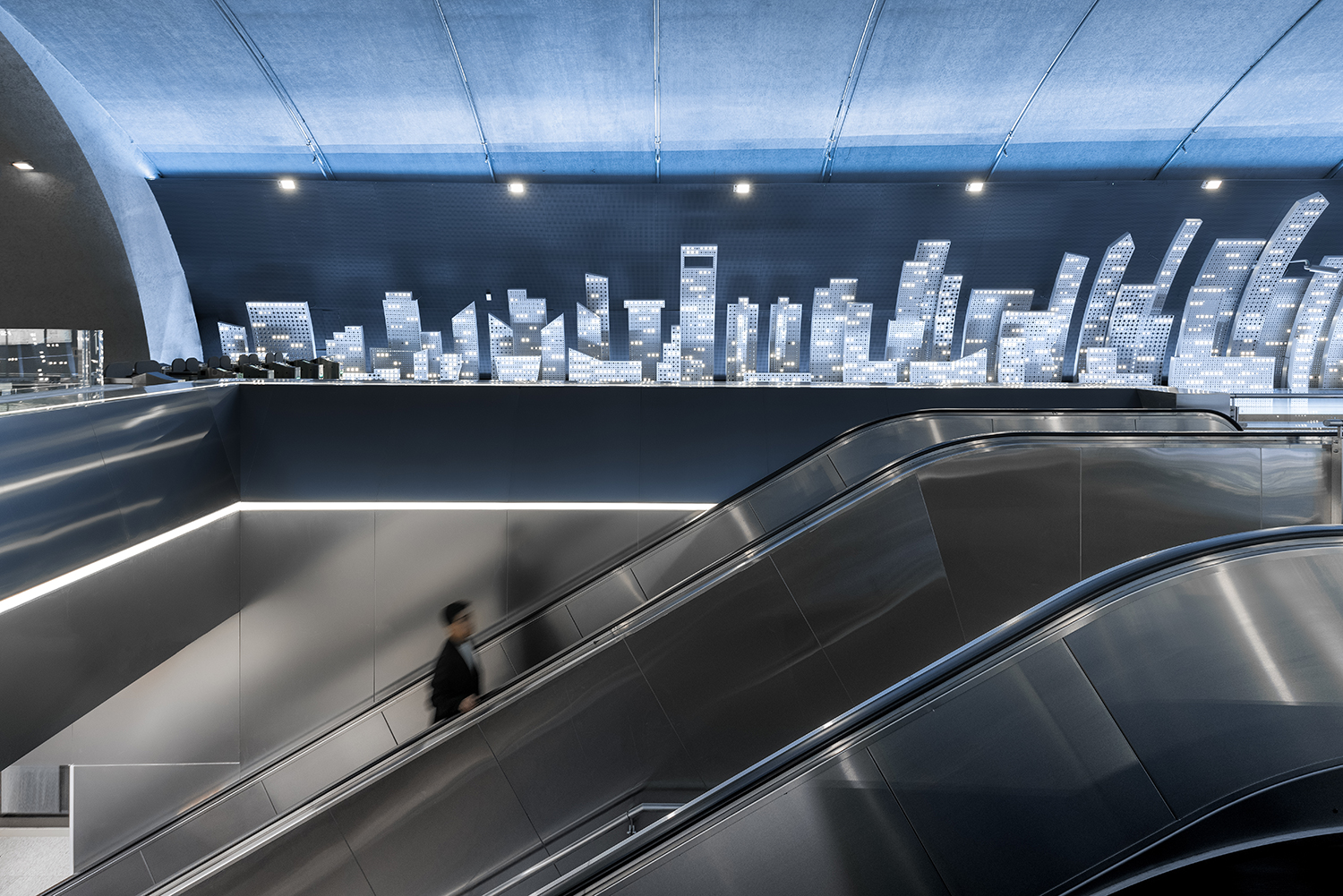 The developer Shentong group achieved an innovation in the design of the metro station hall of Line 15, they used a prefabricated large-span stacked arch structure with a net span of 21.6 meters at Wuzhong Road Station, thus creating the first column-free unobstructed large-space platform hall of the Shanghai metro.

The client asked the architect to maximize the beauty and authenticity of the large-span arch of the station hall, with the original face of the structure exposed. The nails used to fix the ceiling keel would potentially destroy the integrity of the prefabricated structure. Therefore, there won’t be any space for the air conditioning vents, sprinklers, lighting, cameras, and evacuation instructions to be hidden in. 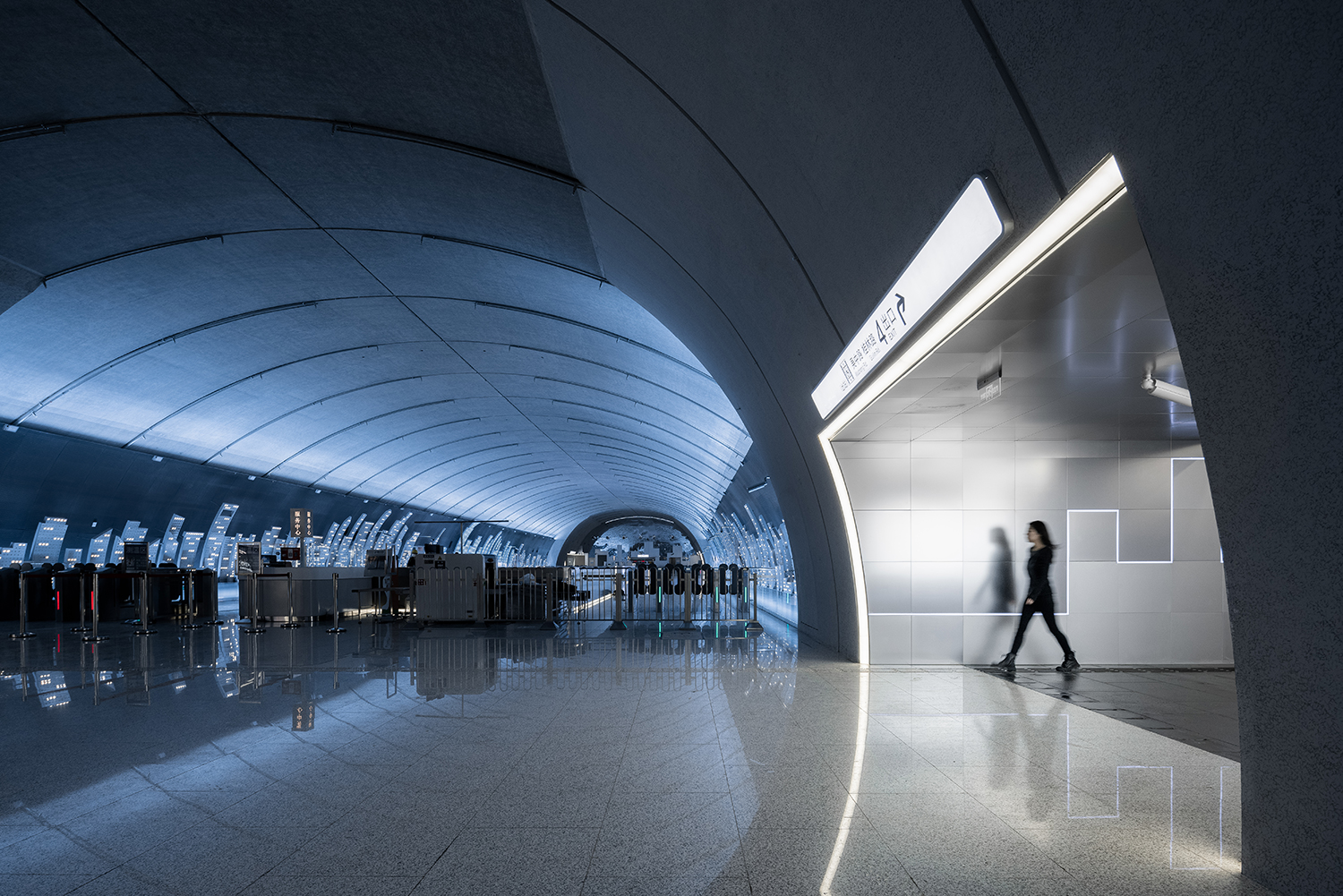 But there is always a way, Shanghai people do things to simplify. The architect team used the gaps between the prefabricated structural parts to embed the fire sprinkler pipe, turning them into decorative lines. The flood lighting was placed in the gap under the urban setting to light up the ceiling from the ground. The camera and evacuation indication are side-mounted using the structural keel of the city scene. Finally, the air conditioning vents are divided into two parts; one part are circular vents on the end wall of the station hall, the other part of the vents into the three side railings of the escalators and staircases, forming a U-shaped frosted stainless steel ventilation low wall. A vaulted ceiling is even simpler. 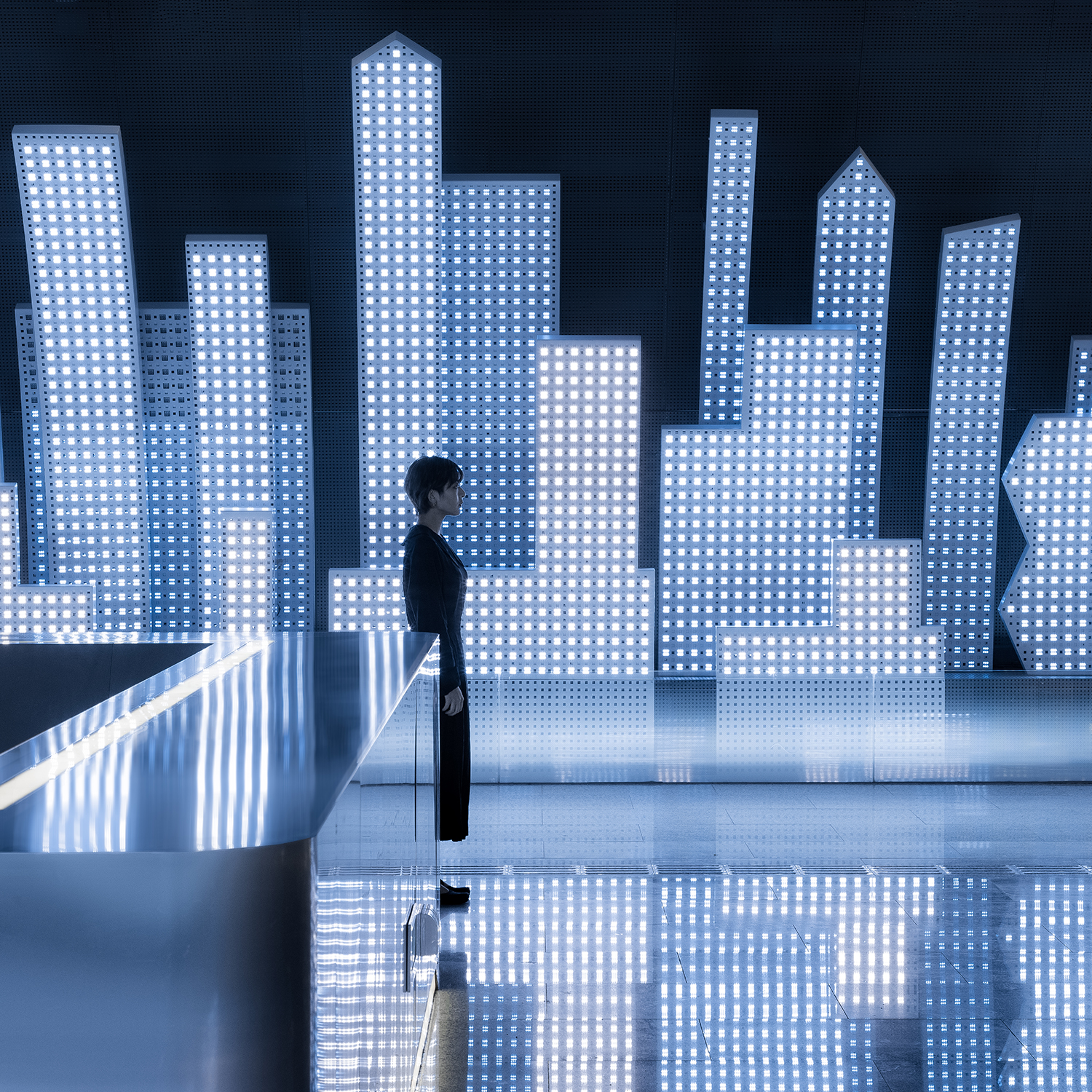 During the construction, the problem was found that the equipment pipelines of the subway intersected centrally above the four entrances of the station hall, and led to branch pipes running along the arch-shaped walls at a height of about 3 meters through the station hall, brutally breaking the simple shape of the arch structure and the city skyline. The architects then added a continuous dark gray curved perforated aluminum panel behind the urban silhouette, which nicely shields the pipes and serves as a back ground for the skyline and better accentuates the cityscape. The architects modified the arch curve at the entrance to make it closer to a half-circle, and the space between the two curves can accommodate the massive integrated pipeline. This modification also allows the entrance to naturally have a volumetric doorway cover. 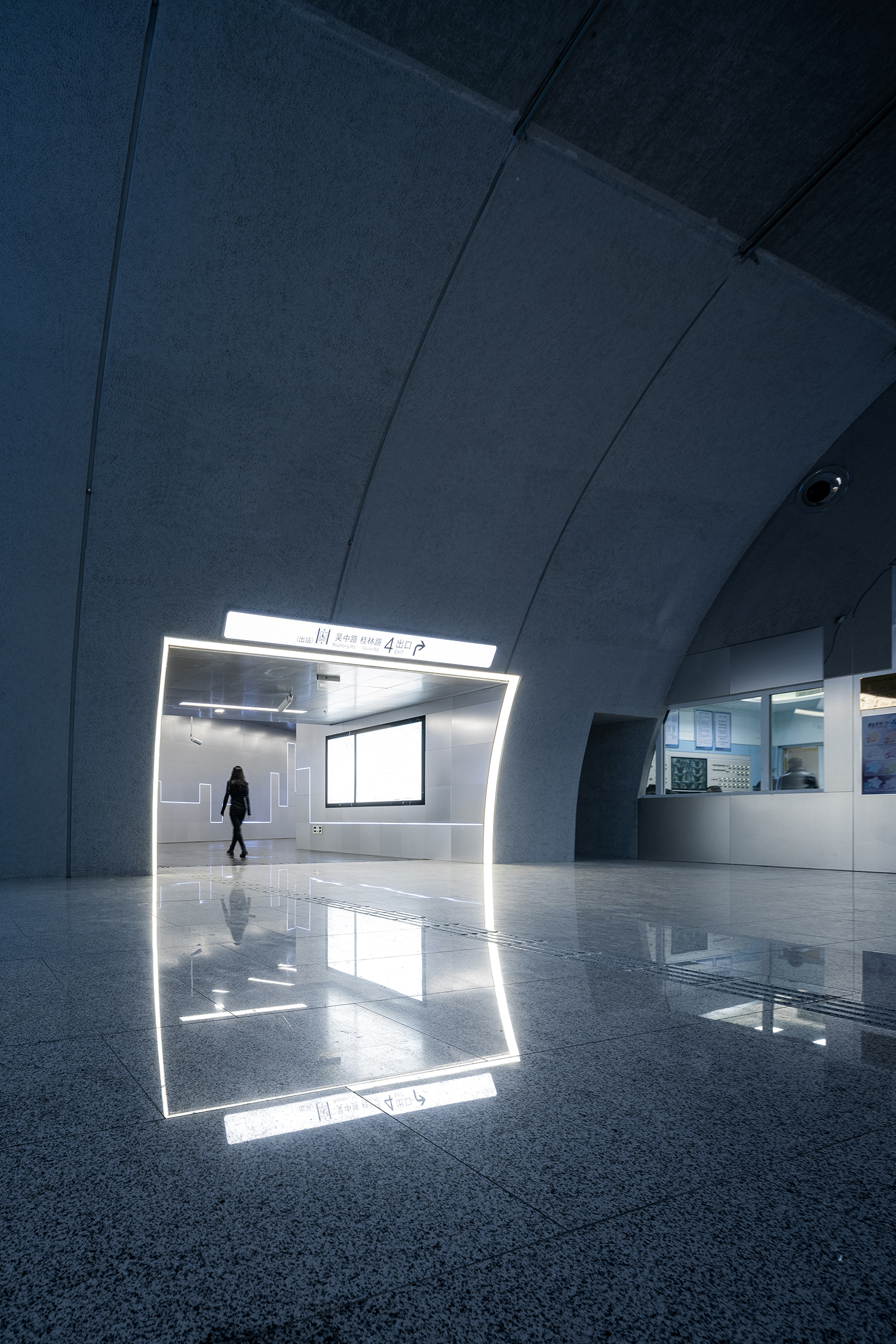 The design of the ventilation opening combined with the balustrade to form a short ventilation wall needs the ventilation ducts to give way to the structural beams. This is also a safety hazard, as the wall can not be close to the edge of the structure and there is a gap. So the architects designed a trapezoid to form a closing score at the height of the air outlet. Since there is an oblique angle, the client is worried that there will be a triangular gap between the escalator and the subway and someone could fall from there. The architects made an L-shaped folded edge to form a capital U in shape, so that the loop was closed. Also for safety reasons, the air vent were designed as a protruding grille to prevent someone from placing a child on the top of the low wall. 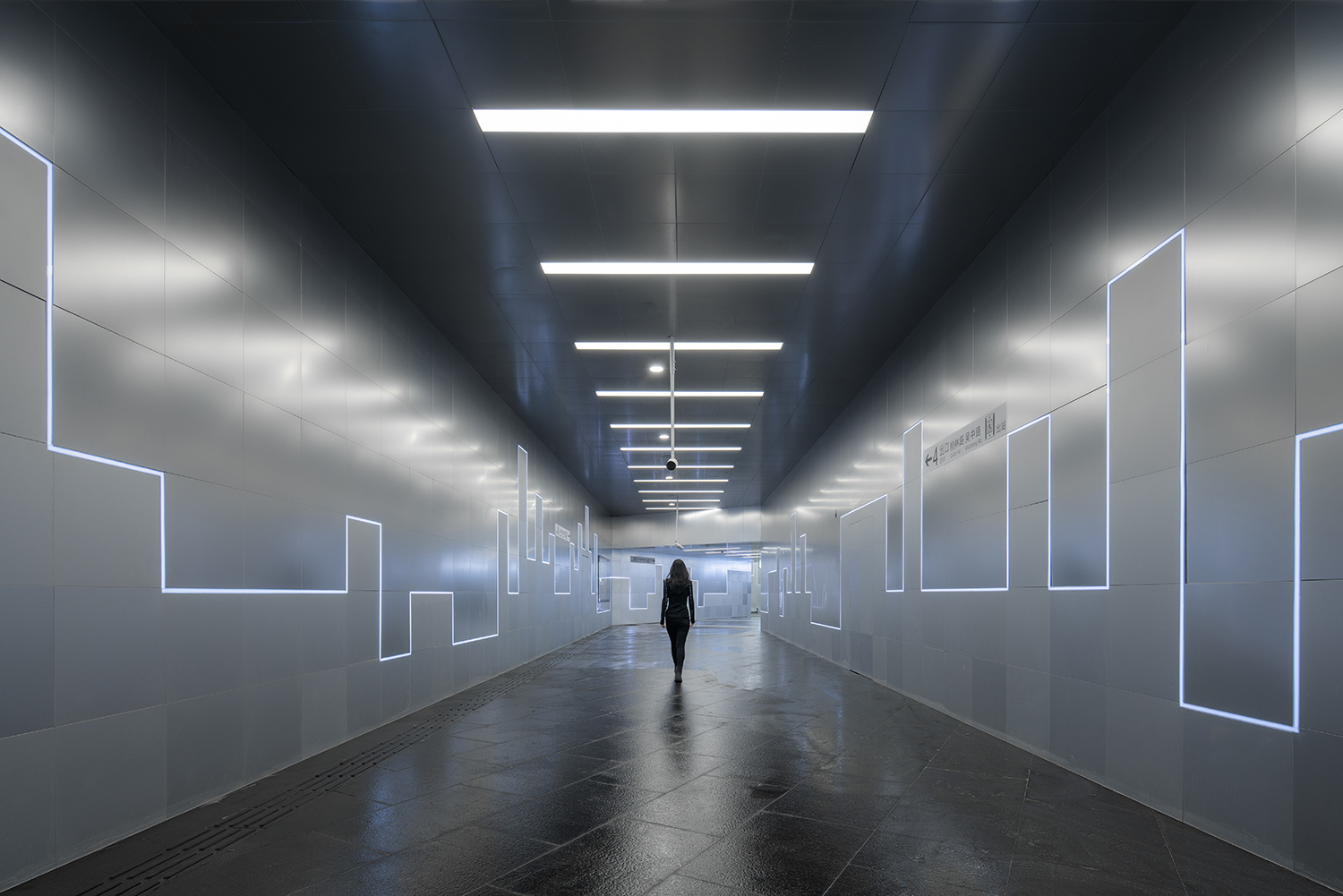 The architects used three layers of perforated aluminum panels to create a vivid urban scape. Since the arch structure could not impose structural keel nails, all aluminum panels were installed through a grid formed by welding secondary keels on the main keel at ground level. The architect requested that the panels be folded to create a visual thickness, which resulted in a sense of volume and delicately obscured the keel in the side view. The gap between the three layers of aluminum panels provides the space needed for the aluminum panels and the floodlighting to be installed without interfering with each other. The architects also designed five sizes of perforations at different architectural and hierarchical levels in order to make the urban scape more layered, after determining the basic size of the openings where the LED modules could be placed, weakening the aluminum panels to reflect light and sound while also weakening the dull metal surface of the panels. 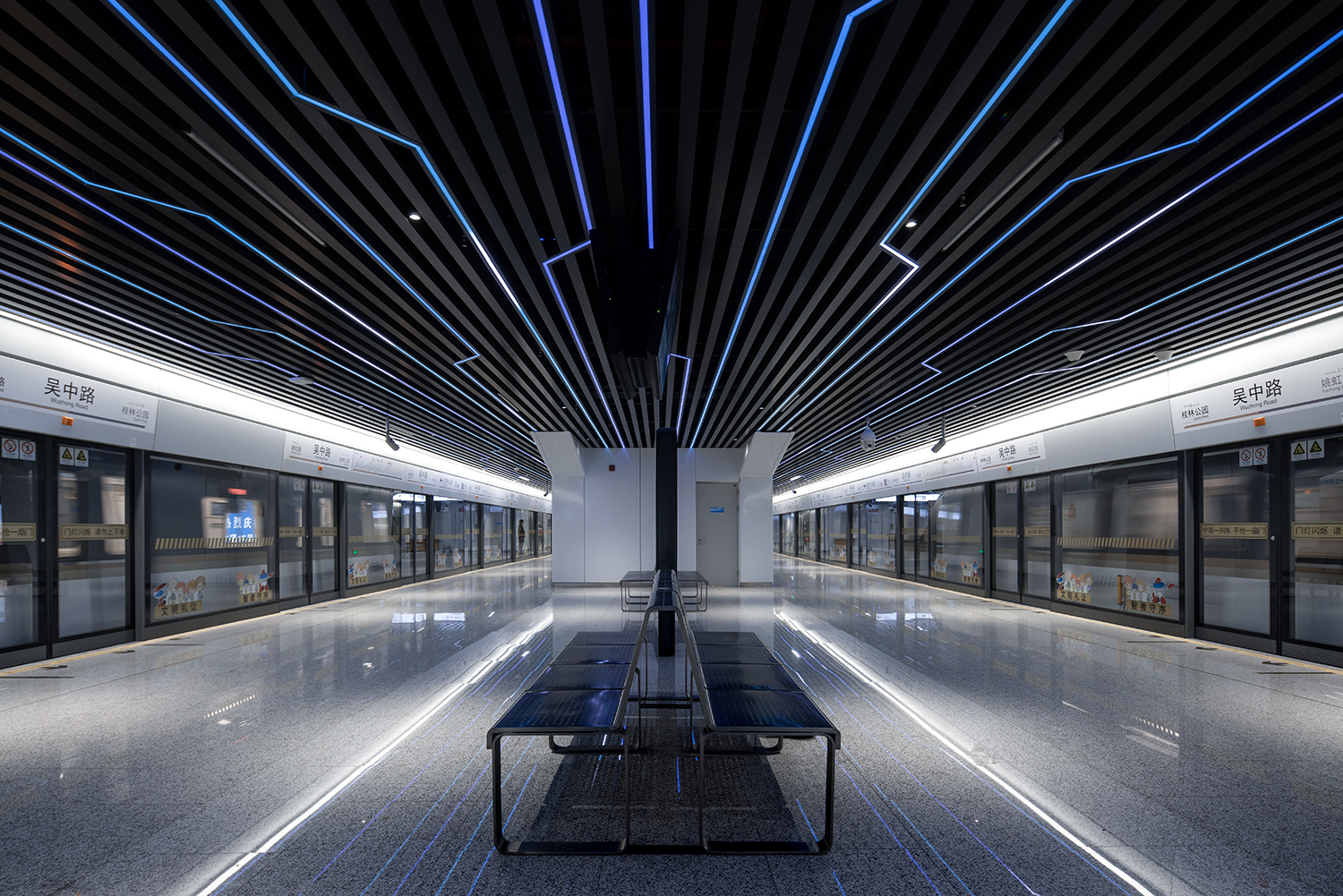 In the construction drawing stage, it was found that according to the specification of the subway station hall, a continuous water retaining wall with a height of 60cm needs to be placed in front of the city scape. If the same marble material of flooring is used, the wall would look clumsy, and if it was simply painted, it would look crude, both of which would make the city scape look like it had been cut off flush. The architects decided to use continuous tempered glass with a gradient film as a water retaining wall. The gradient film functionally suggests the presence of glass to prevent collision of the passengers, and visually creates the dramatic effect of the building rising slowly in the morning mist. 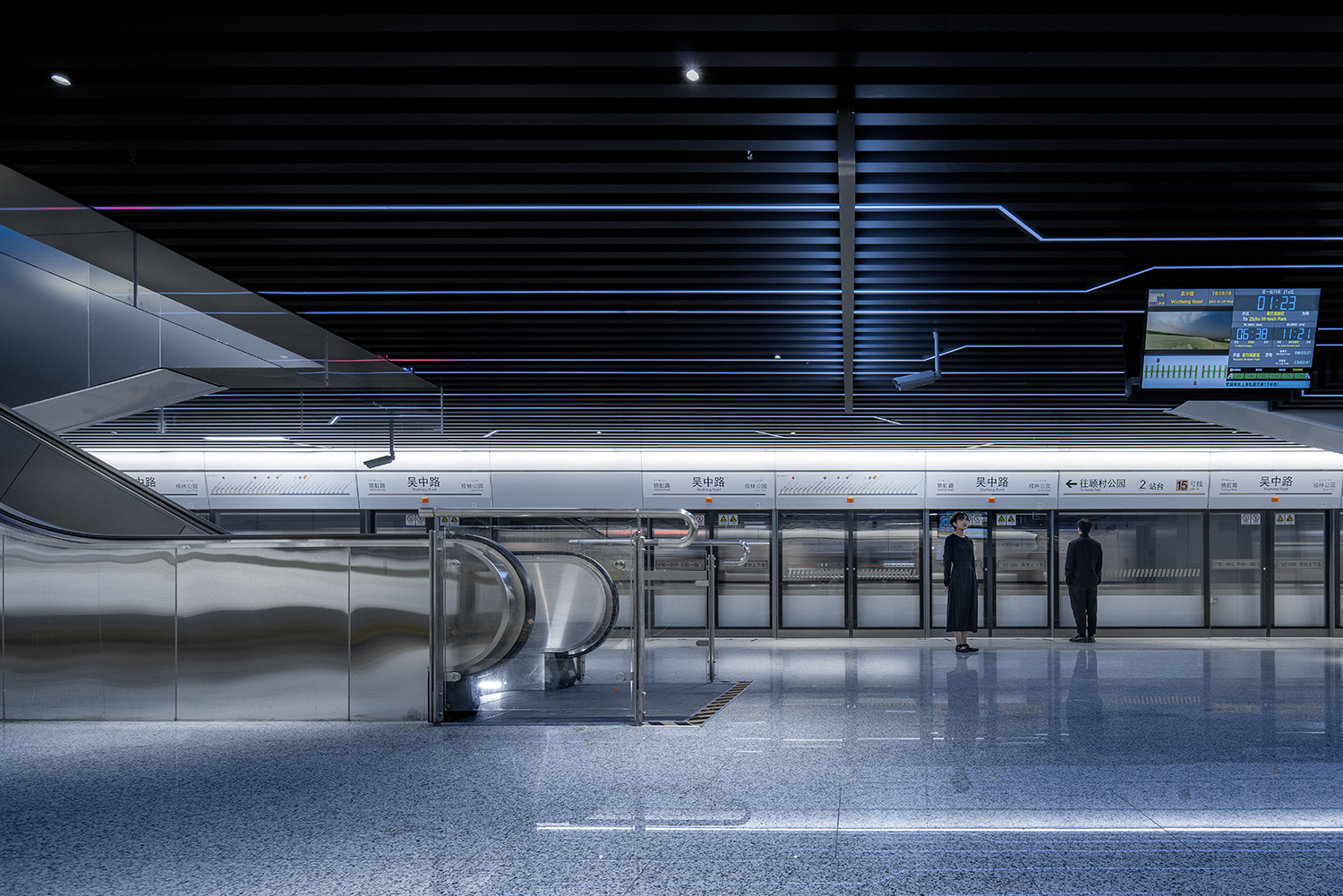 The calm improvisation also has evident in the design of the end wall. The architects originally designed the entire wall as a complete mirror, but in synthesizing the facilities and equipment found that the wall had windows for the control room, working access doors, accessible elevator doors, ventilation louvers for the machine room, and vending machines. These facilities are of varying heights and widths, with varying depths of projections. The architect continues the story of the city’s skyline, extending the line to form an abstract continuous shape of high and low buildings, with various facilities included below the line, and these windows and doorways ticket machines seem to be the city’s architecture, with the same frosted stainless steel as the ventilation wall. Above the skyline, the mirror surface is still applied, so that the cityscape on both sides seems to be projected into the infinite distance beyond the close view of the city. It seems that the design was conceived in this way from the beginning. 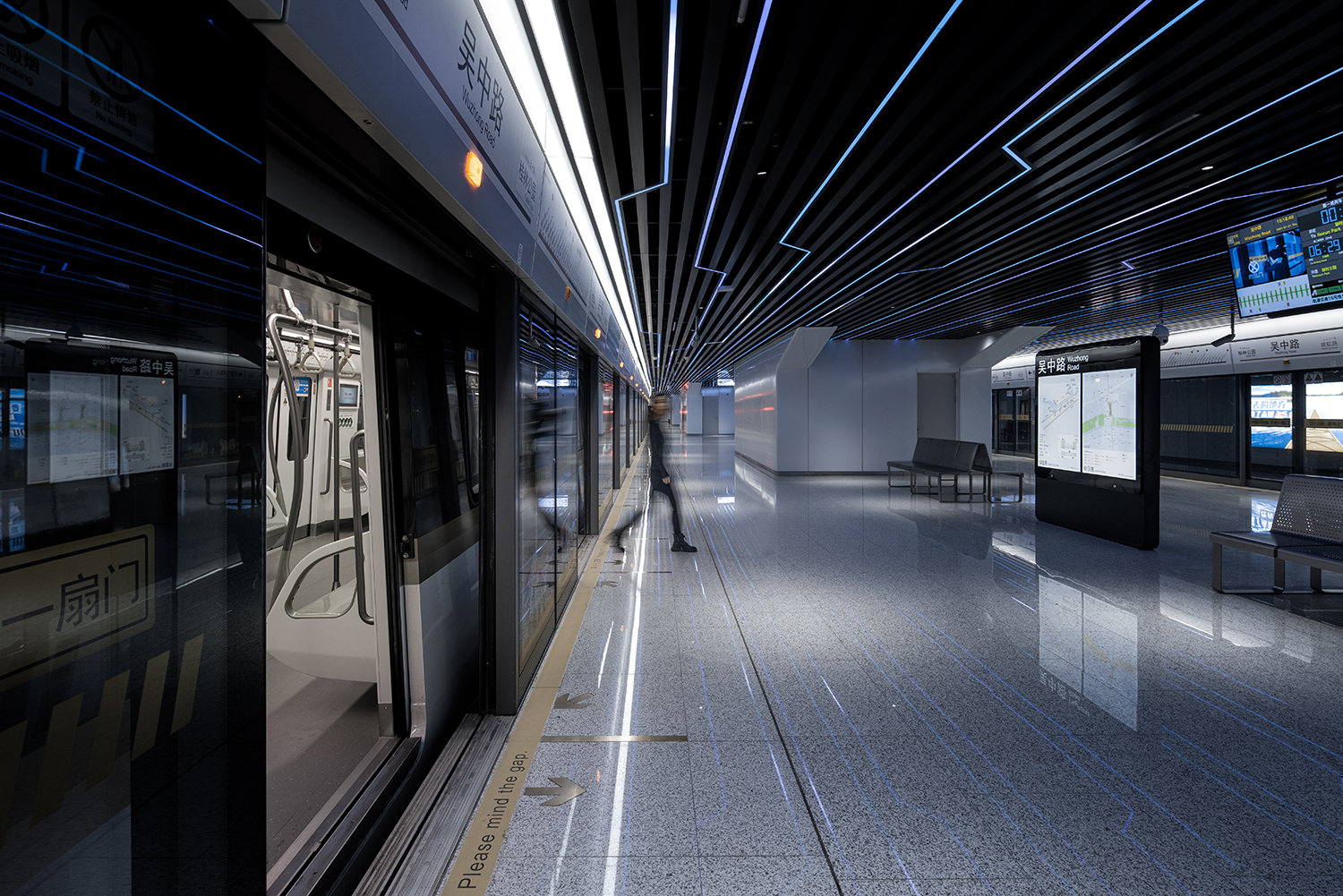 The public is guided in and out of the station hall by the city’s skyline, which are abstracted into a continuous LED strip, and the lines here do not repeat the complex design of the station hall, as if they were a restrained prelude or epilogue to the climax.

You may notice that the platform ceiling also has this linear LED strip, but you will not realize that they are actually symbolizing the Shanghai Metro map, with the movement of the light synchronizing the direction of the subway running on both sides of the platform. 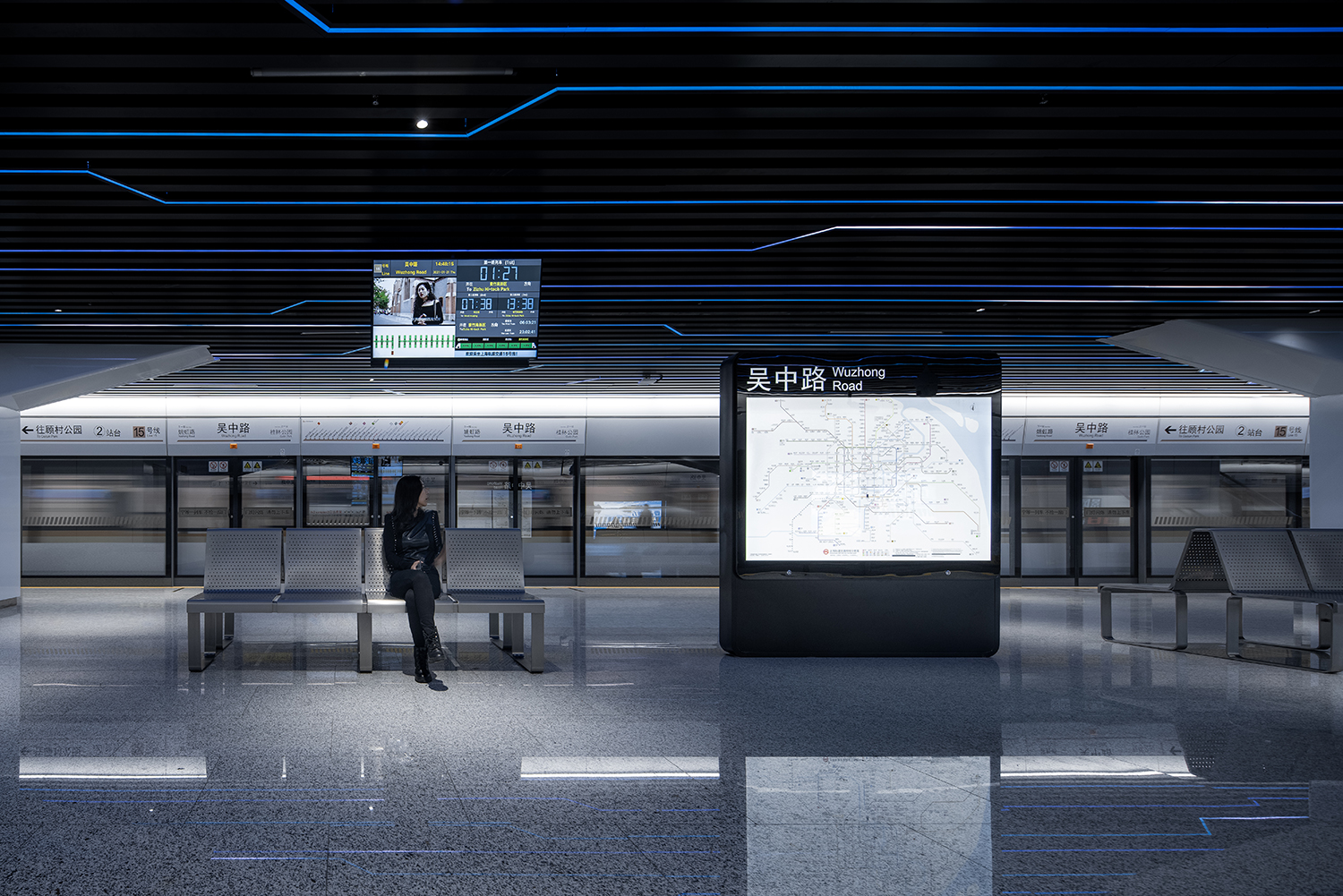 You can see the famous Pearl of the Orient, the Triple towers and other iconic buildings as well as many abstract skyscrapers in the spectacular city silhouette, but if you look close enough you will find ten buildings that are the important station hall based buildings of Shanghai Metro. The architects are so subtle in their display of pride, a measured expression of the metro’s indispensable role as a catalyst for the great city of Shanghai. The Wuzhong Road station is crowded with citizens after the opening, being interviewed by reporters, the exciting citizens said ‘it has now become the living room of Shanghai.’