MVRDV has proposed a radical transformation of Eindhoven‘s Heuvel shopping centre into a green cultural quarter. On its roof, the design features not only a park, but also a stacked cultural building under a “glass mountain”. The strategic vision was presented on Tuesday 18th May to an enthusiastic response from the mayor and aldermen of Eindhoven, paving the way for a feasibility study of the Muziekgebouw that is expected before the end of the year. 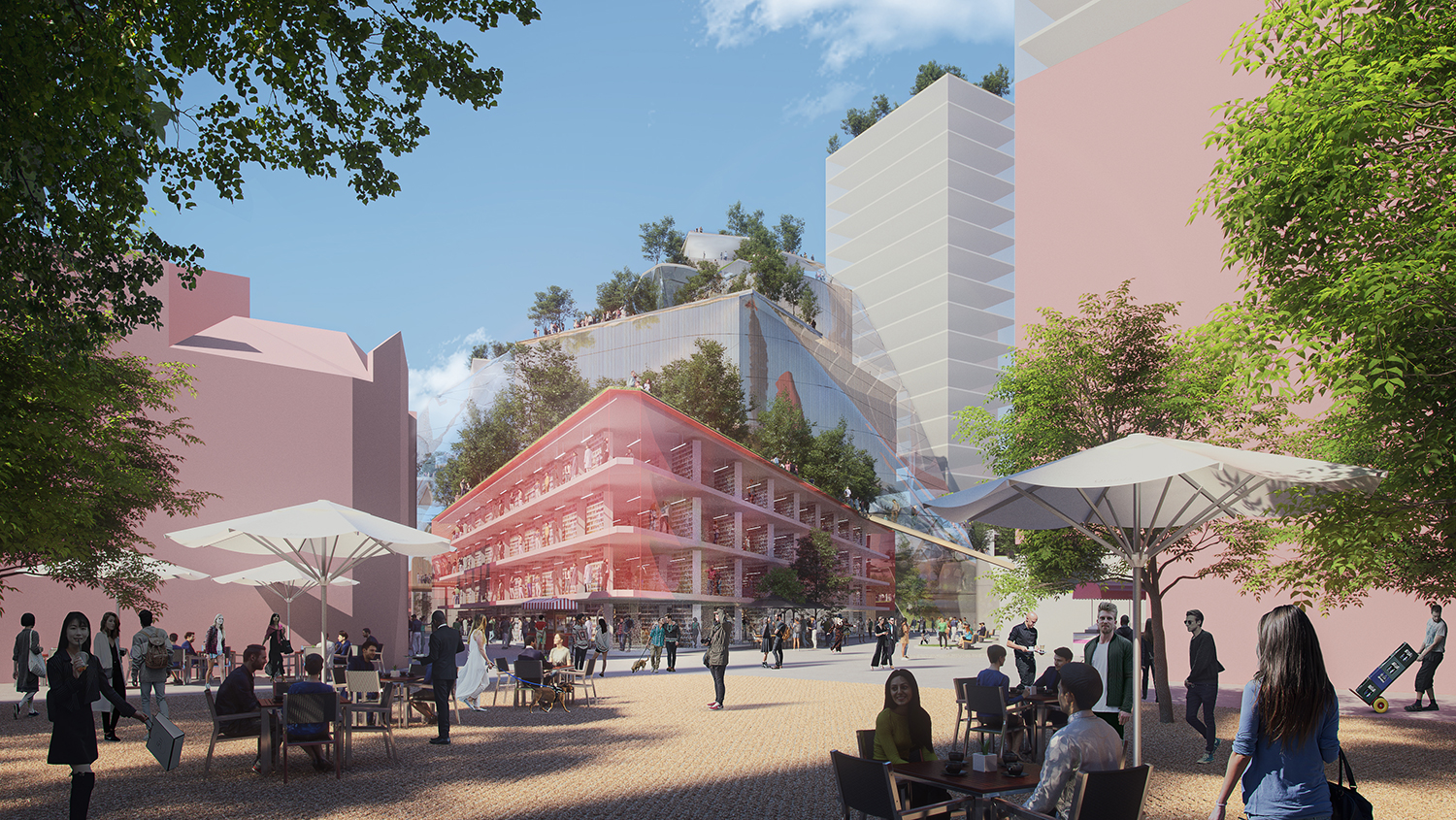 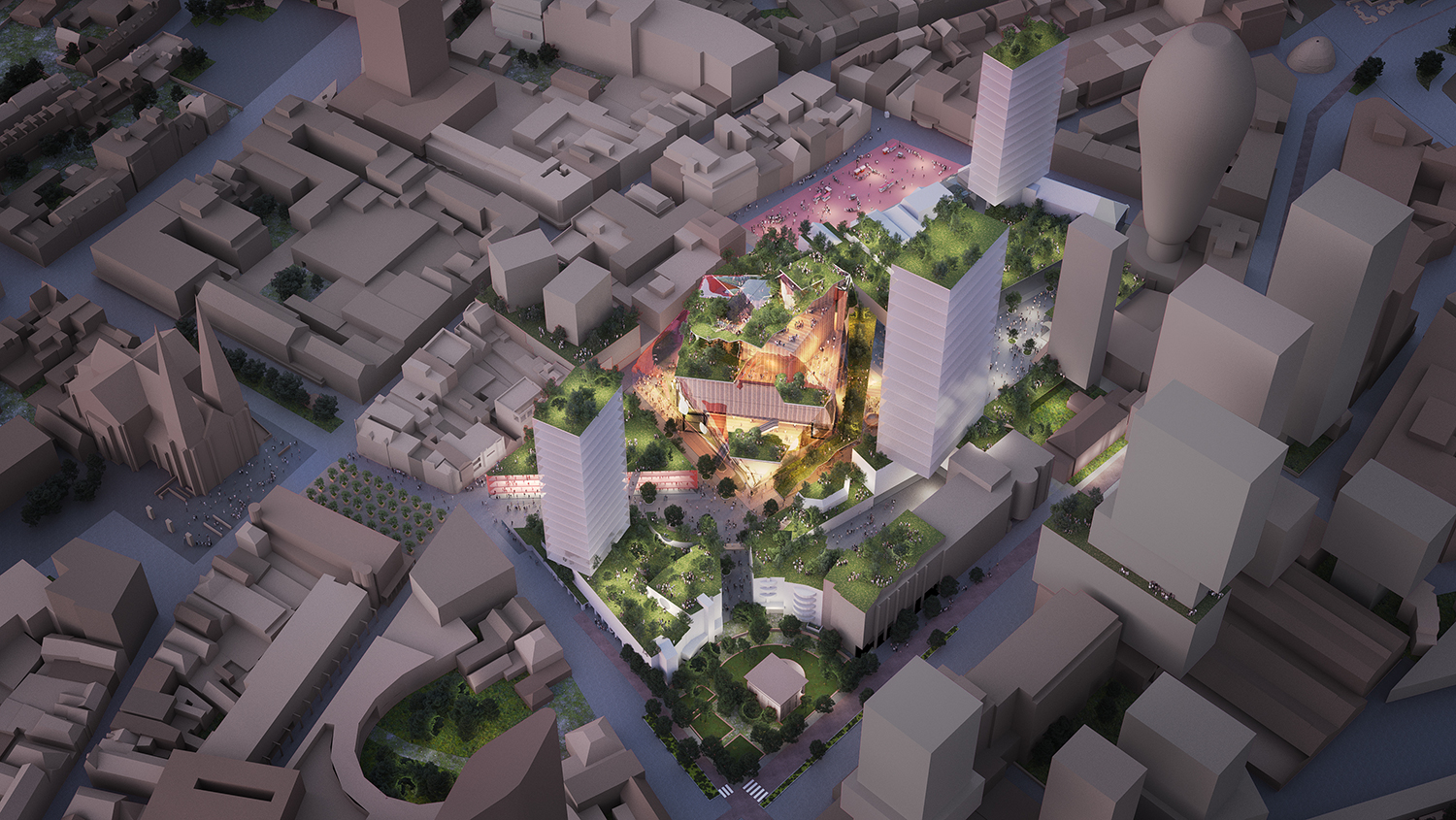 In MVRDV’s vision, the Heuvel will be transformed into an urban quarter where shopping, culture, and recreation take place in the same location. The existing buildings will be expanded and broken open so that they better connect with the surrounding public spaces and cultural buildings of Eindhoven’s inner city. The covered passages of the shopping centre are replaced with open streets, making the quarter an active part of the life of the city, while the roofs are accessible and green, creating a park that adds to the area’s attractiveness. 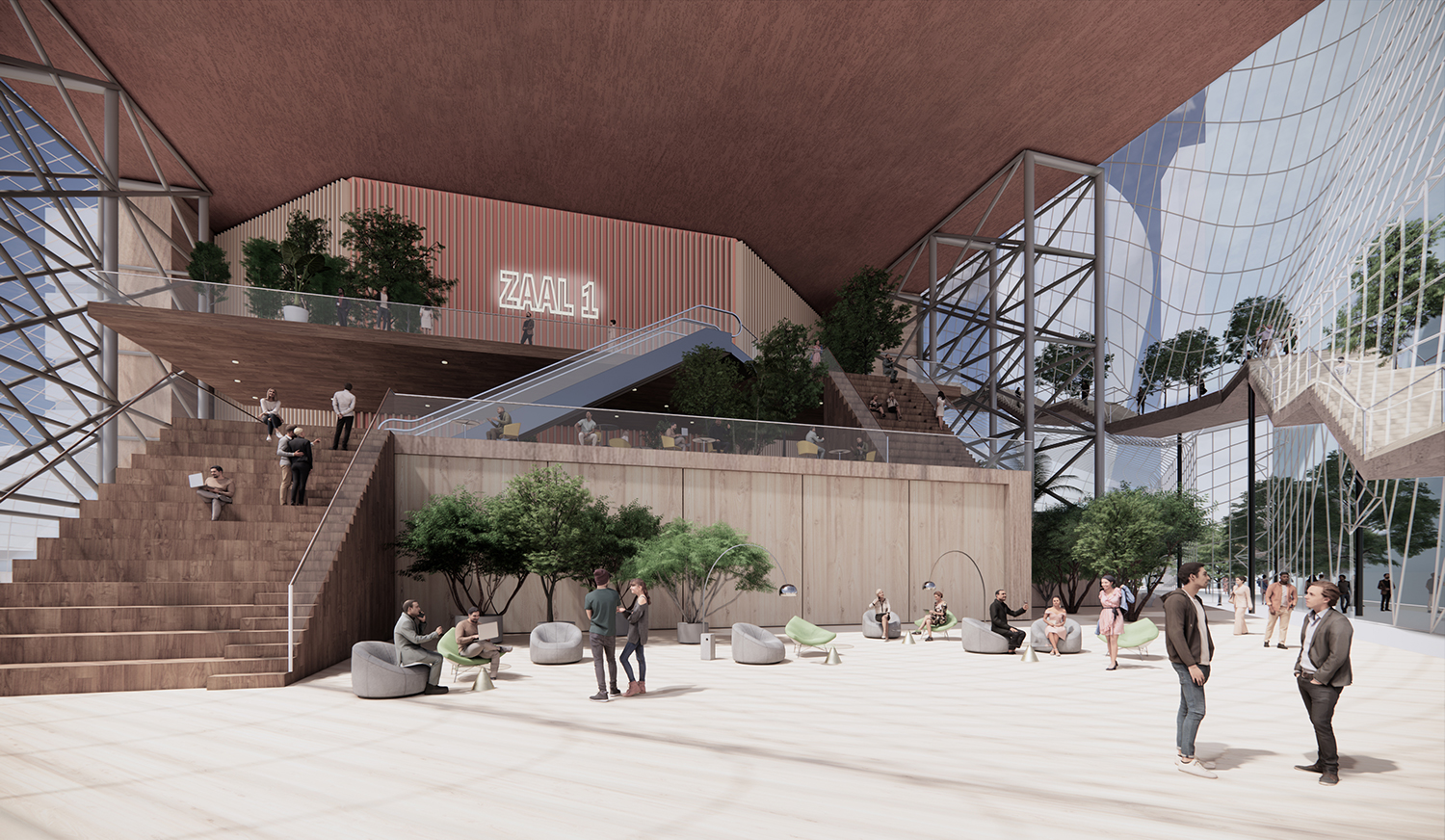 Above the existing Muziekgebouw will be a stacked cultural building under a “glass mountain”. This mountain – which visitors can climb for beautiful views of the city – creates an eye-catching landmark for the Heuvel, and makes the quarter an important contribution to the densification and greening of central Eindhoven. It also creates additional space for the Muziekgebouw, allowing the venue to adopt a broader programme. The ambition is to turn the Muziekgebouw into a living room for the city: during the day, Eindhoven residents will be able to stay in the building’s foyers to work or relax. With this new mix of functions and the much broader programme offering, “Het Heuvelkwartier & De Muziekberg” (“The Hill Quarter & The Music Mountain”, as the proposal has already been christened) will draw Eindhoven residents in greater numbers. 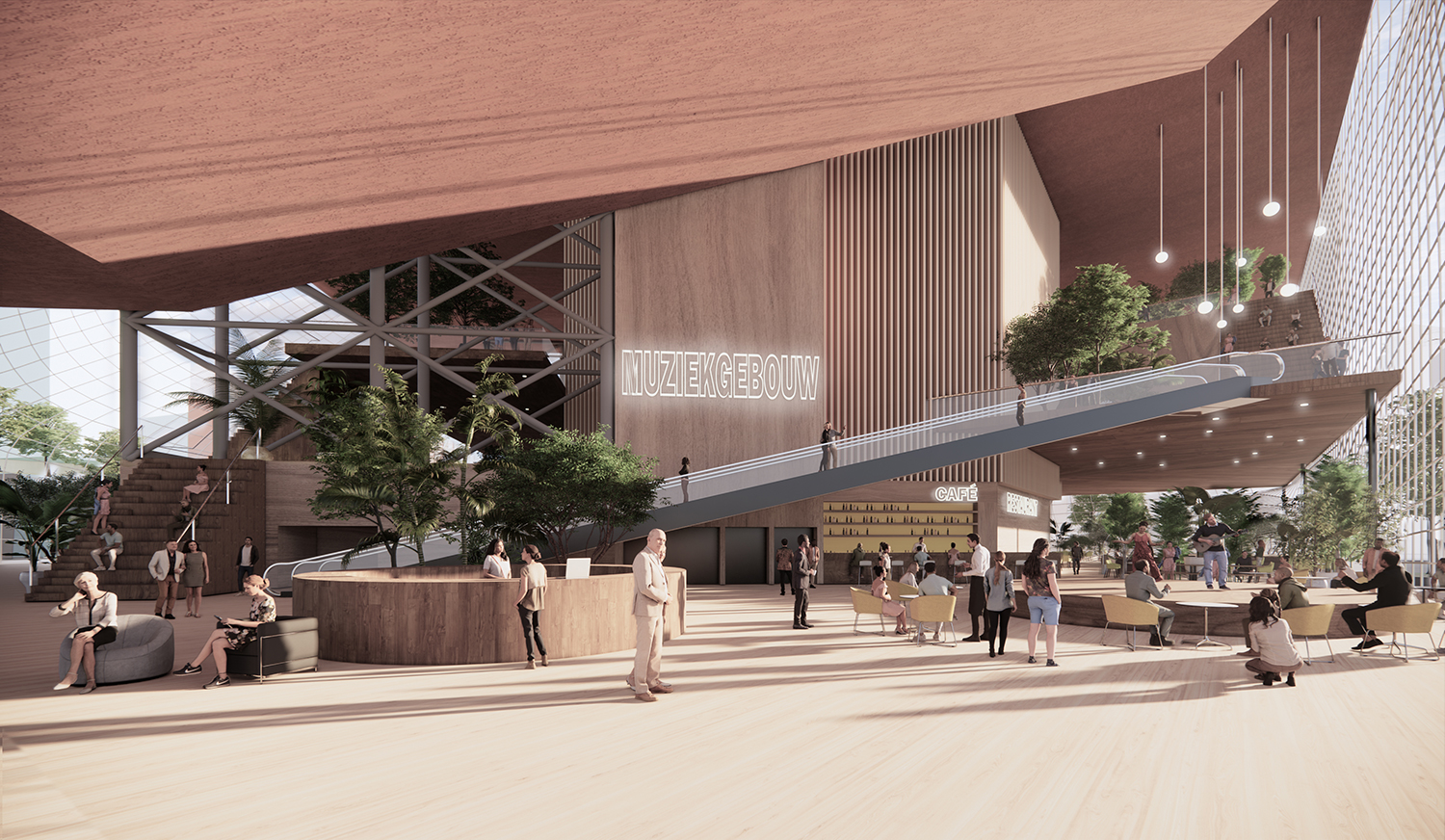 “Culture makes a city attractive, and a city as fast-growing as Eindhoven deserves a central music venue that is more visible,” says MVRDV founding partner Winy Maas. “Our vision is an open and accessible shopping, residential, and cultural quarter. We achieve this by radically opening up the existing buildings, transforming the complex into seven new city blocks, and expanding upwards from the roofs. Our goal is to make the complex attractive again for all the people of Eindhoven who want to shop and go out, while at the same time ensuring interaction with the inner city. In our vision, the area will have a totally different allure.” 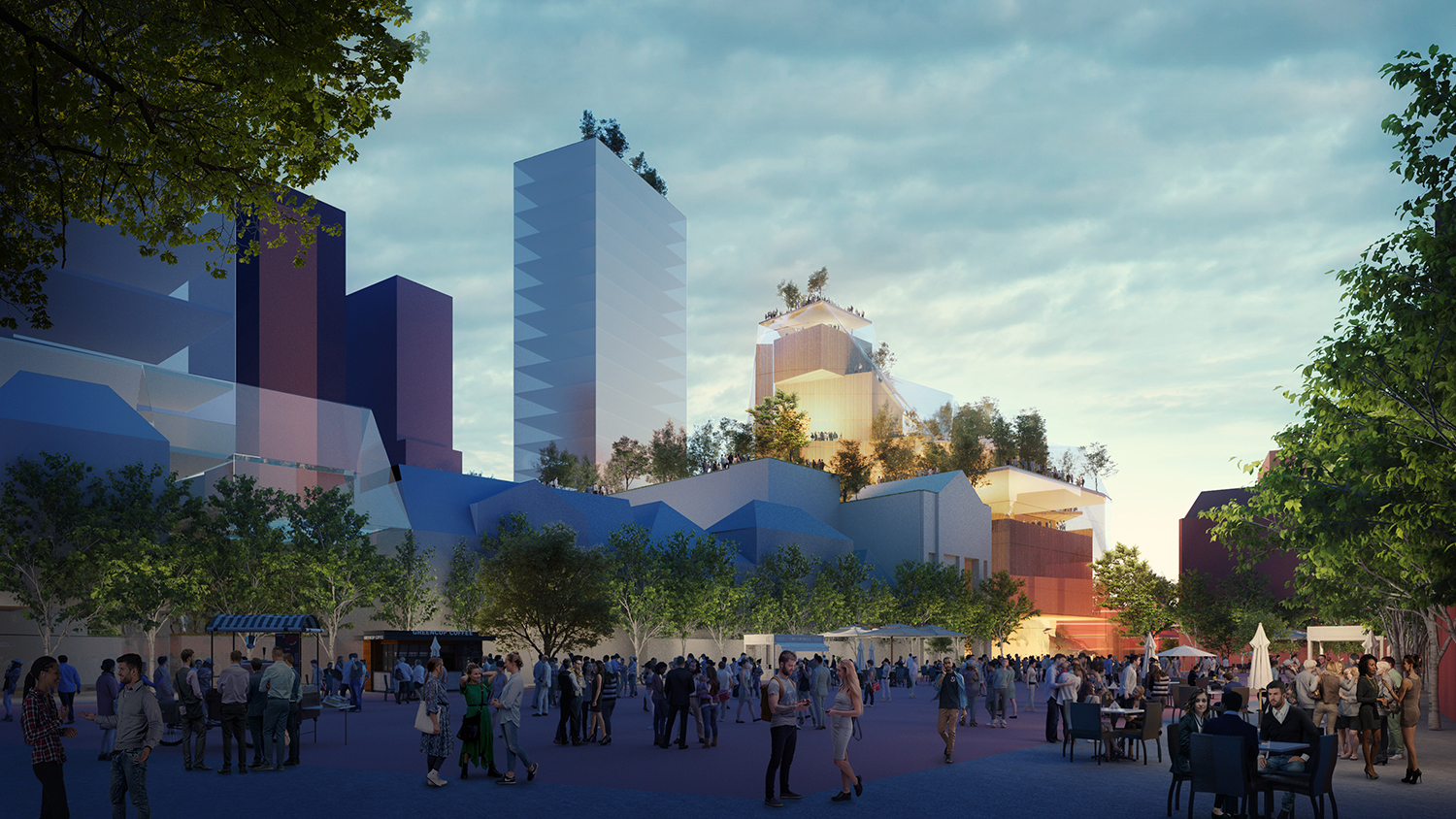 Shopping centres worldwide are suffering from a decline in visitors due to the rise of online shopping, especially since the beginning of the coronavirus pandemic. MVRDV has worked on a number of projects which address this shift – from the under-construction Marble Arch Hill, a temporary installation that aims to entice visitors back to London’s Oxford Street, to the Tainan Spring in Taiwan, a green oasis that opened in 2020 built on the foundations of a half-demolished shopping mall.