Danish studio Dorte Mandrup has designed a city-center IKEA store with hundreds of trees and new public meeting spaces for Copenhagen, Denmark. Located near the main train station, the historic Meatpacking district, and the inner-city harbor, the store is placed in an extremely busy area of the city with few green spaces offering a break from the commotion. With a new rooftop park, resting 20 meters above bustling the street and the train tracks, the new city store is adding a much-needed green space to the city.

“Vesterbro is a densely populated and active district of the city that only has a few green pockets and walkways available,” says Dorte Mandrup, founder and Creative Director of Dorte Mandrup. “With the new rooftop park, we want to give back a green lounge to the local community and create both intimate resting places and opportunities for spontaneous meetings. From the top of the roof, you have a beautiful undisturbed view over Vesterbro, the canal, and the inner city.”

Different native woods, shrubs, grasses, and bug hotels matching the conditions of wind, sun and shade creates a rich fauna while at the same time delaying rainwater. Not only adding a lush new park, the 150 meter roof garden will also be part of a new walking route stretching one kilometer from the southern part of Copenhagen all the way to the inner city. The new front plaza adds a green space to busy bridge Dybølsbro, running over the train tracks – an entirely new public area with café and bike parking surrounded by urban nature with public access down to a new bus terminal and up onto the park above. 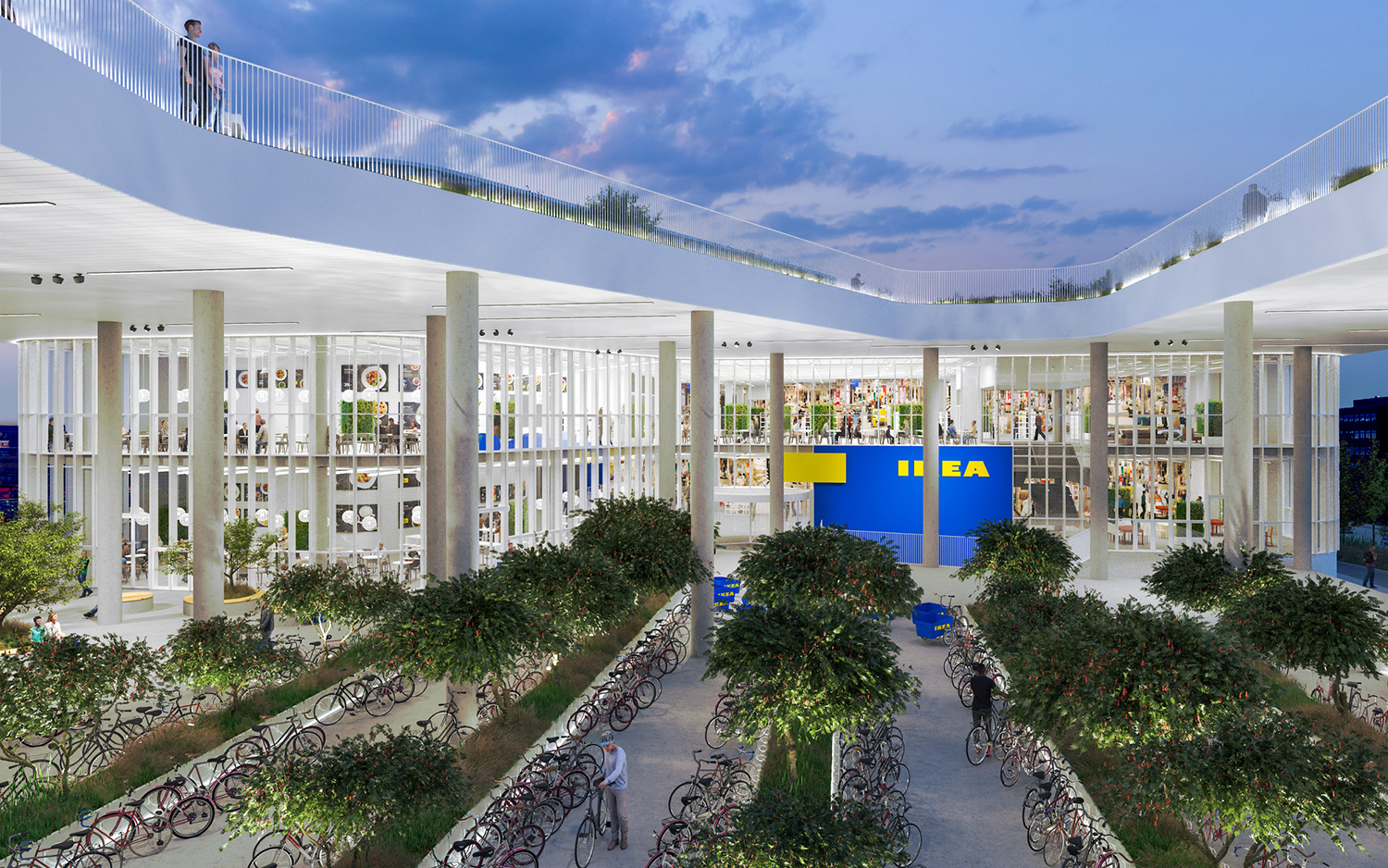 The rooftop park is however not the only thing that makes IKEA Copenhagen stand out from the crowd. The design completely challenges the notion of the classic blue and yellow IKEA. Covered in greenery, the white, organic facade almost seems to be draped in wavy fabric.

“The facade draws inspiration from a white curtain motif. Flowing down from the edges of the rooftop park, the curtain is pulled aside a few places, revealing the displayed items inside. The curtain ends in a pedestal on street level where you can take a short rest in the midday sun in between the rippled folds,” explains Dorte Mandrup. 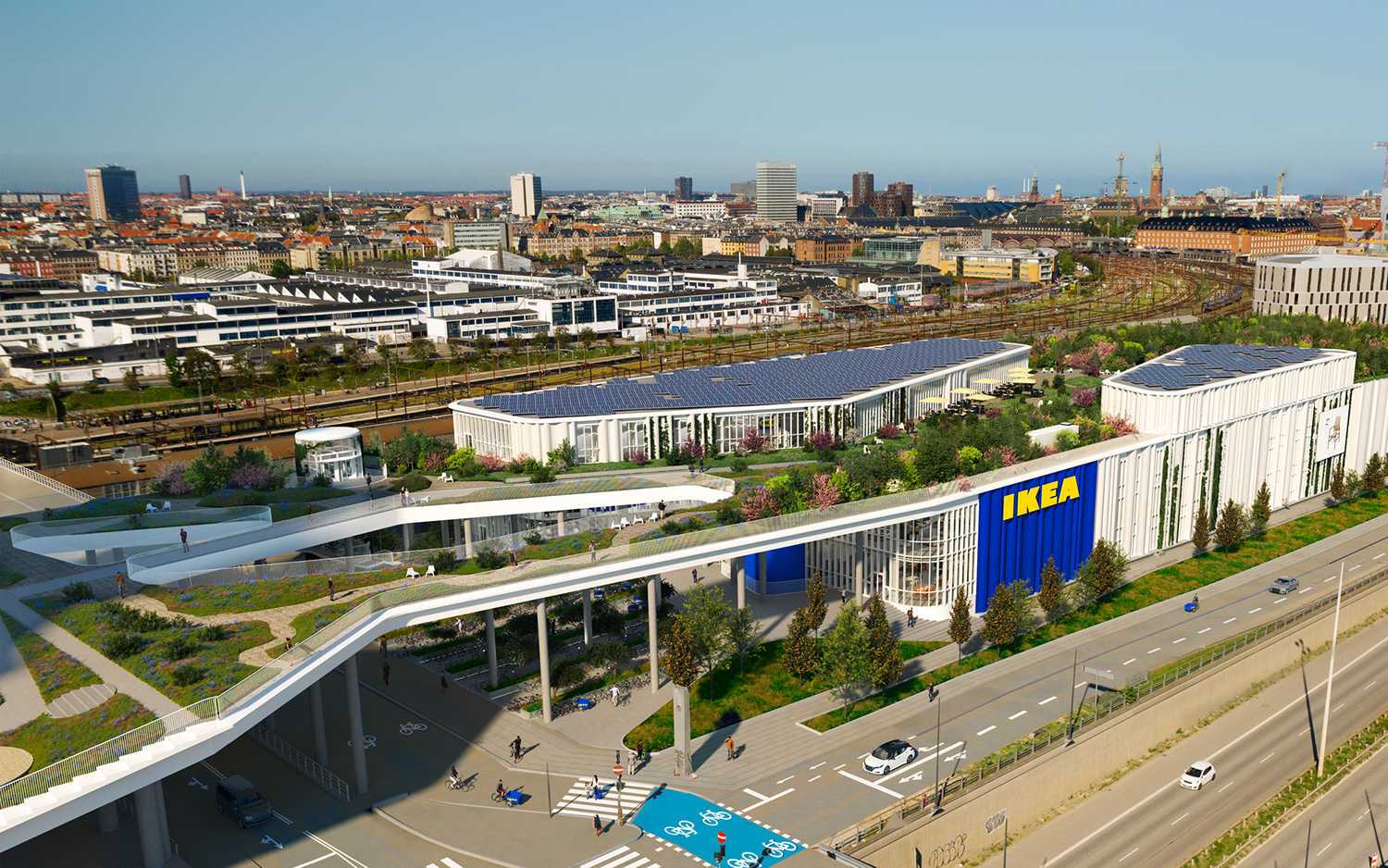 Designed for convenience and inspiration inside and adding much-needed new public spaces to Vesterbro, IKEA Copenhagen serves the needs of the modern, urban consumer. With parking spaces for hundreds of bicycles, IKEA cargo-bikes available for customers and easy access for pedestrians, the new city store is tailored to the behavior of its neighbors.

“IKEA Copenhagen will be a completely new experience for Copenhageners. It is much more than a store. You will find inspiration and delivery options to your door, making it a new shopping experience in IKEA and our next step on the journey of bringing IKEA closer to the many people. But the city store will also create a new meeting place as locals will not necessarily meet there to shop. They can also stop for a cup of coffee, dwell on the rooftop or meet friends for dinner. This way, we try to bring something back to the neighborhood,” says Johan Laurell, CEO of IKEA Denmark. 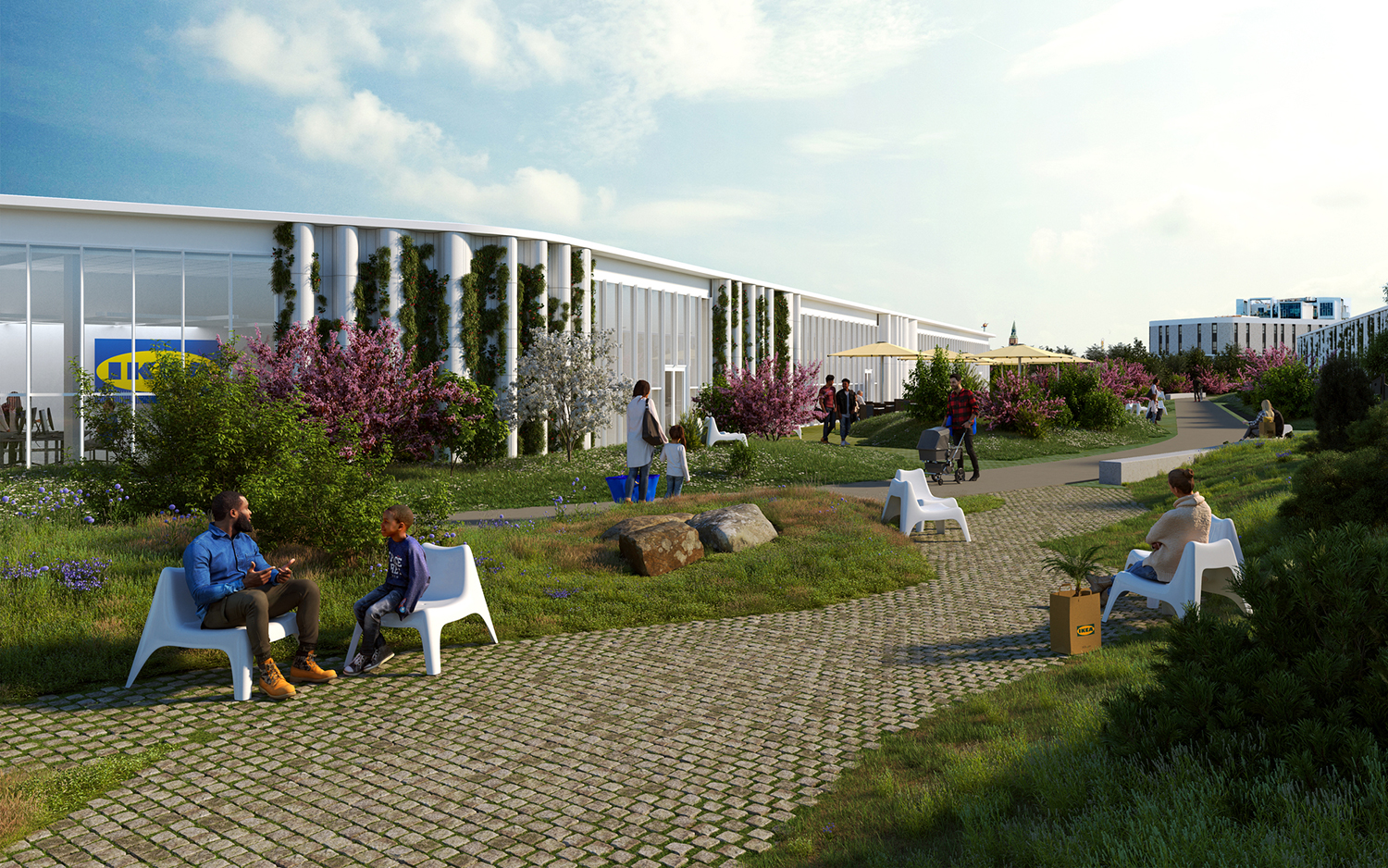 Copenhagen aims to be the first carbon neutral city in the world by 2025.  IKEA Copenhagen will both cater to city’s green visions for the future and be an important step in IKEAs ambitious commitment to become a circular business by 2030.

Making the construction and daily energy use as sustainable as possible, the city store aims for the BREEAM ‘outstanding’ certification – one of the world’s leading sustainability assessment. 250 trees and bushes, greenery covering the facade,
1450 m2 of solar panels and re-use of water from the canals to cool the store are among the key elements to achieve this goal.

IKEA Copenhagen is expected to open in the summer 2023.