FOF Studio has recently overhauled a ground floor flat within a Grade II-listed, former paper mill and tannery in London‘s Bermondsey. The warehouse consists of several original features such as timber beams, brick walls, cast-iron columns and cast-iron pivoting windows. A young couple had lived in the flat for a year and decided it was time to renovate their home. Their main criteria were simple— to make their home a brighter space; and to have a larger kitchen with a central island. 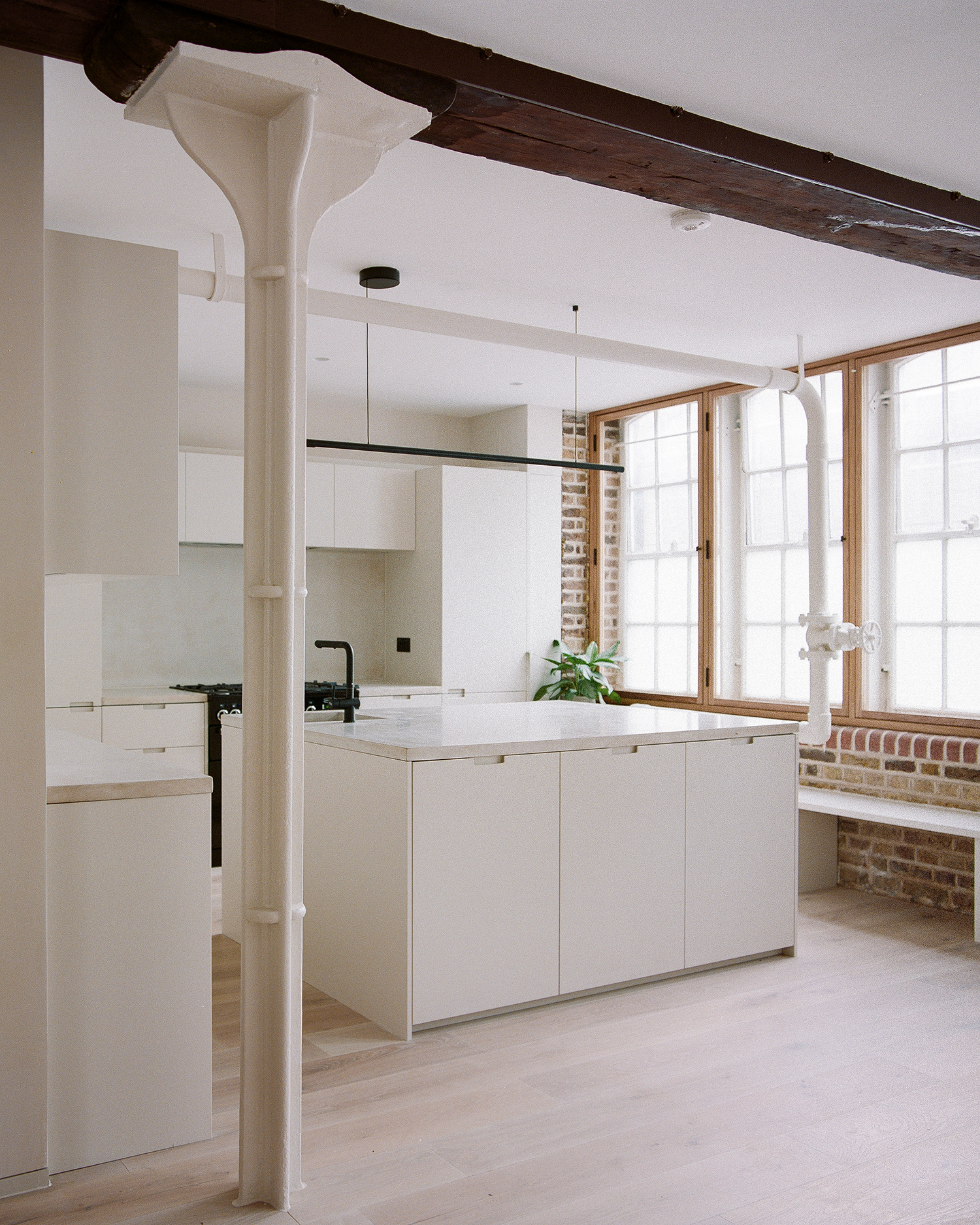 To address the issue of light, the design team decided to remove one of the partitions that formerly divided the living room and bedroom. By opening up the rooms, daylight from the south-facing windows could penetrate into the living and dining space, creating a much brighter area. In lieu of the wall, FOF Studio introduced a set of full height timber-glazed screen to allow flexibility of the space, and add visual interest, with the filtering of light through a mix of clear and vintage-pressed glass. The bi-fold screen serves a two-fold purpose— either to completely open up the living room, or to be closed up into a bedroom. A curtain is added directly behind the screen for added privacy in the evening. 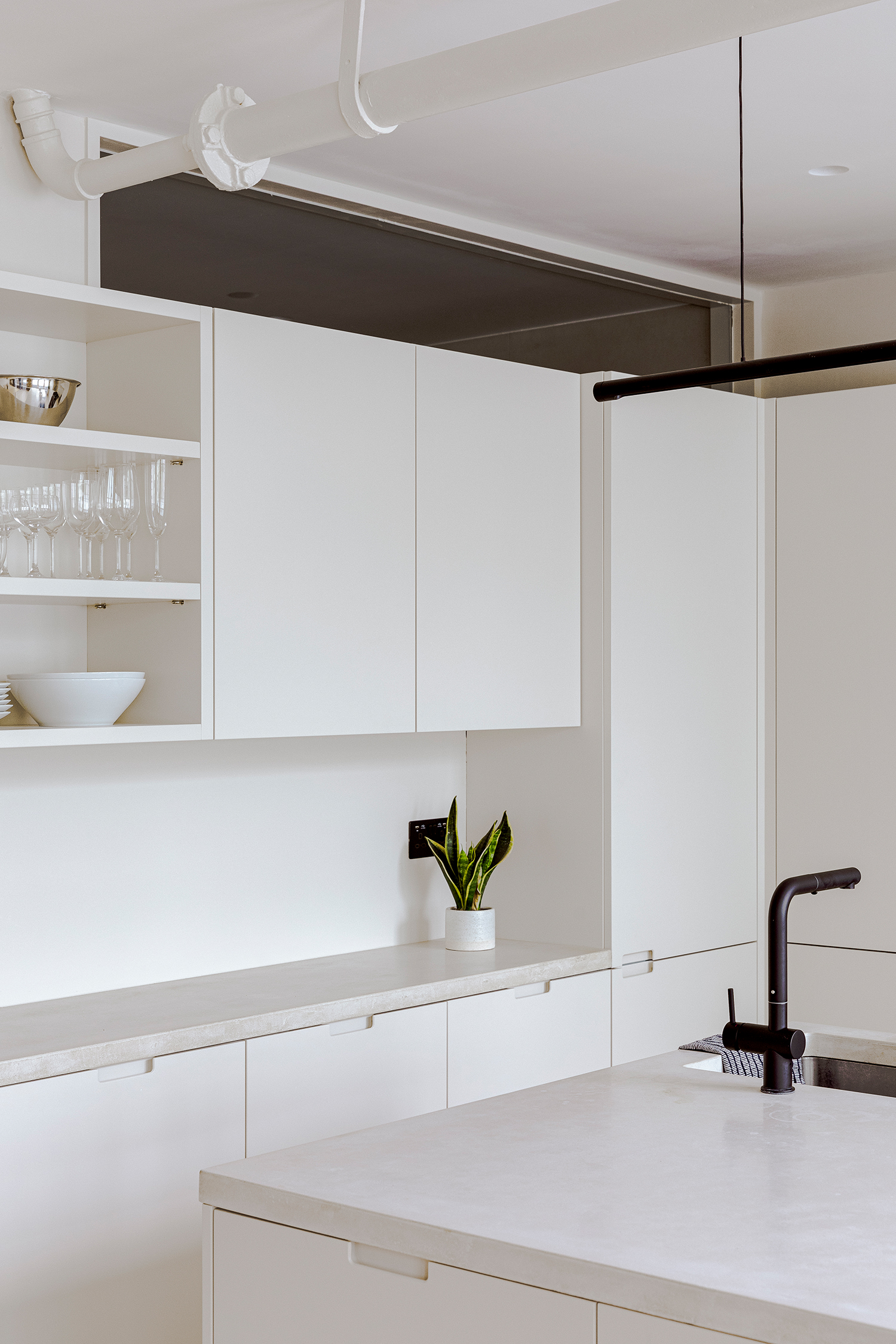 Another element introduced to the flat was an internal clerestory window, positioned between the kitchen and bathroom. After establishing the height of the kitchen unit, the architects utilized the remaining wall space to add in a window, which further allows daylight to flood deep into the interior rooms. 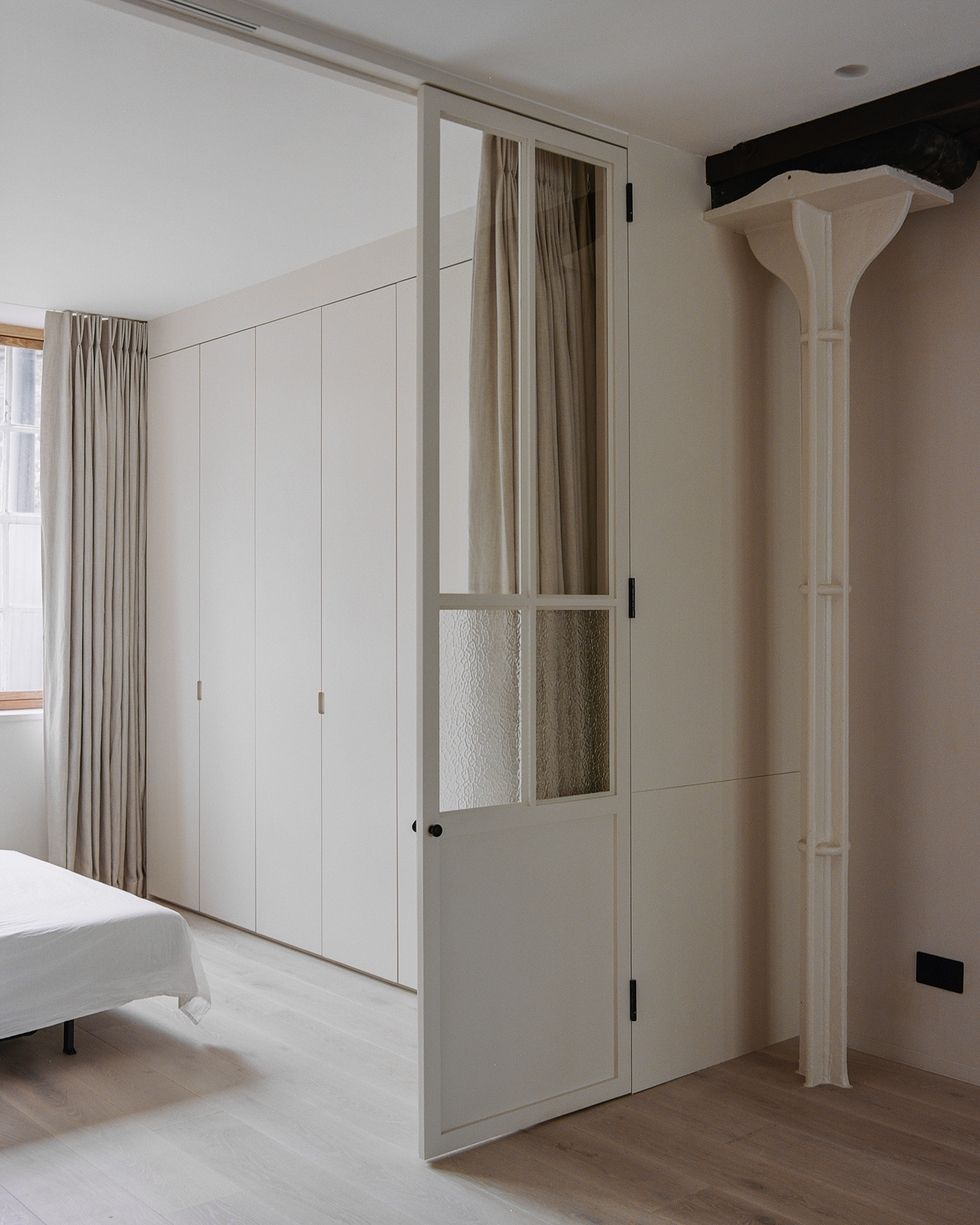 Aside from resolving the spatial configurations, choice of material palette also played a key role in achieving a brighter space. There were many listed elements that architects had to work with, of which the brick wall was a dominant one. The colours of the brick were used as a starting point for our material palette. Picking up on the brown and yellow hues of the brick, and to add warmth to the palette, we introduced an oak-frame secondary glazing to all windows. Pragmatically, this also served to insulate the space thermally and acoustically. The remaining palette was deliberately kept calm— with warm-white painted walls, matching joinery, white-washed oak timber floor, and neutral colour cast concrete in the kitchen. 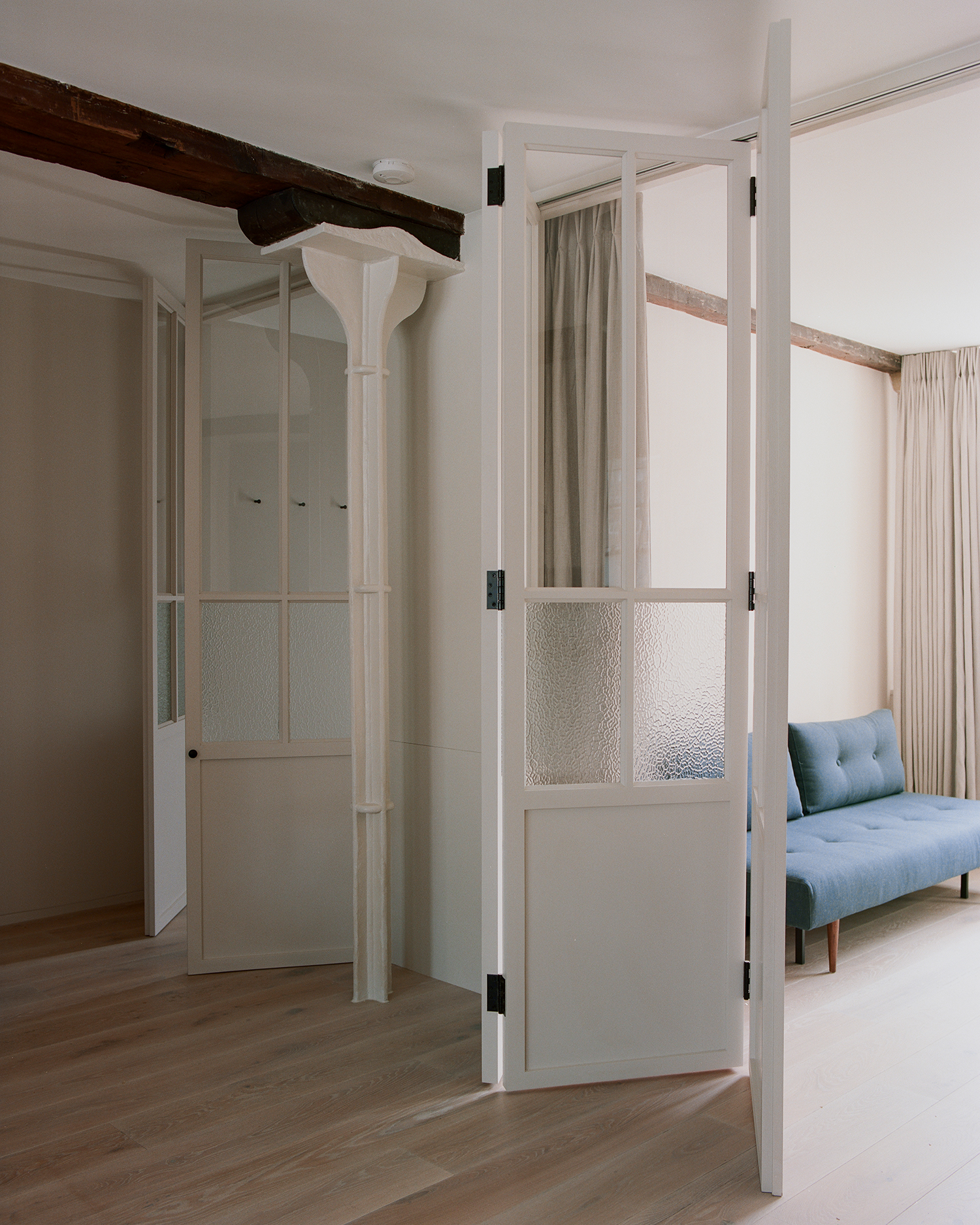 The kitchen is the focal point for the open-plan living space. Based on a request from the client, the studio increased the kitchen floor area from the former layout by reducing the size of the bathrooms. With the added floor area, the architects were able to add in a generous-sized kitchen island, equipped with a dishwasher, wine fridge and plenty of storage. The kitchen joineries were kept minimal, reflecting the palette to the rest of the flat. Framing the view of the kitchen, is the original water pipe in place, suspended above the new kitchen island and upwards into the rest of the building. 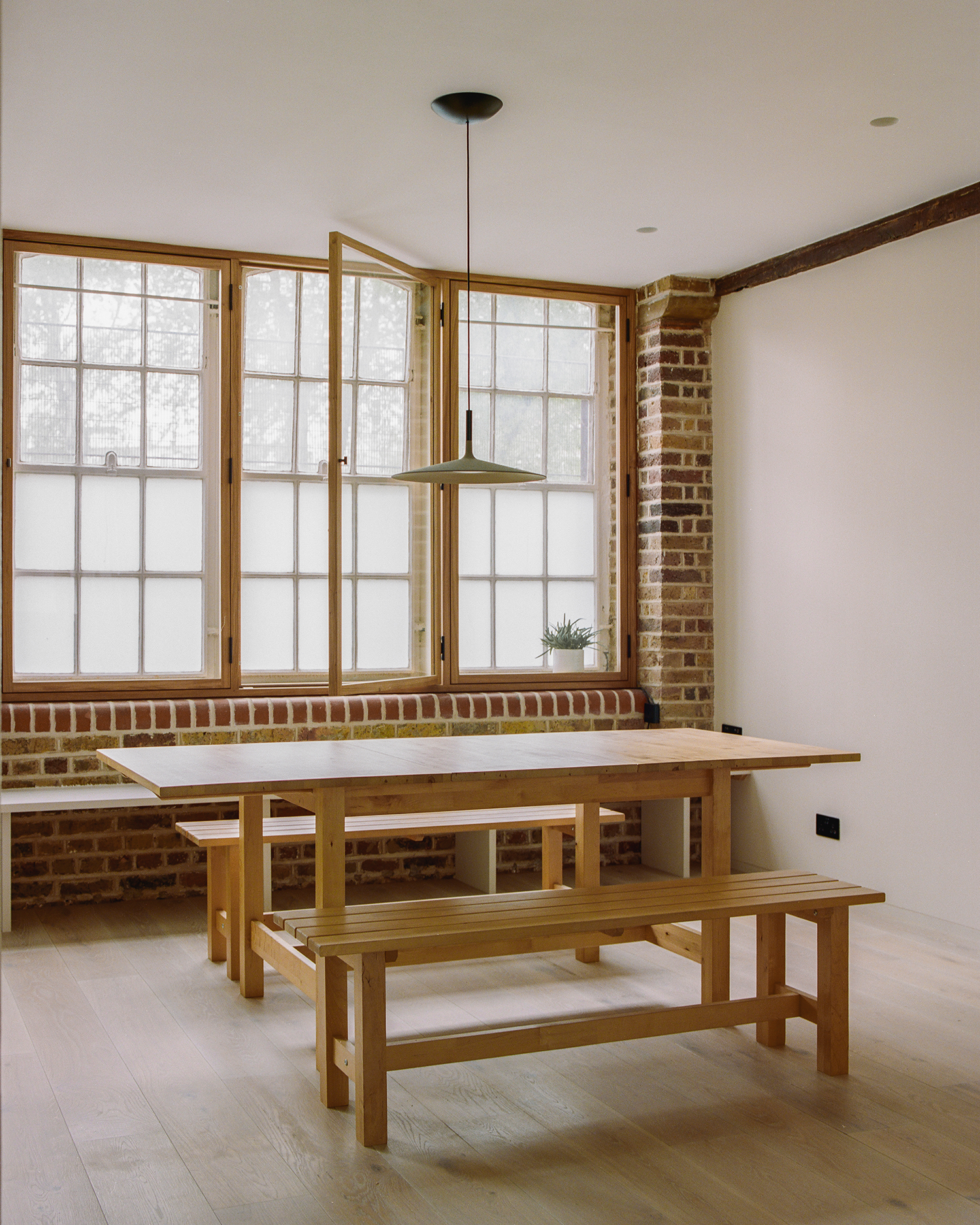 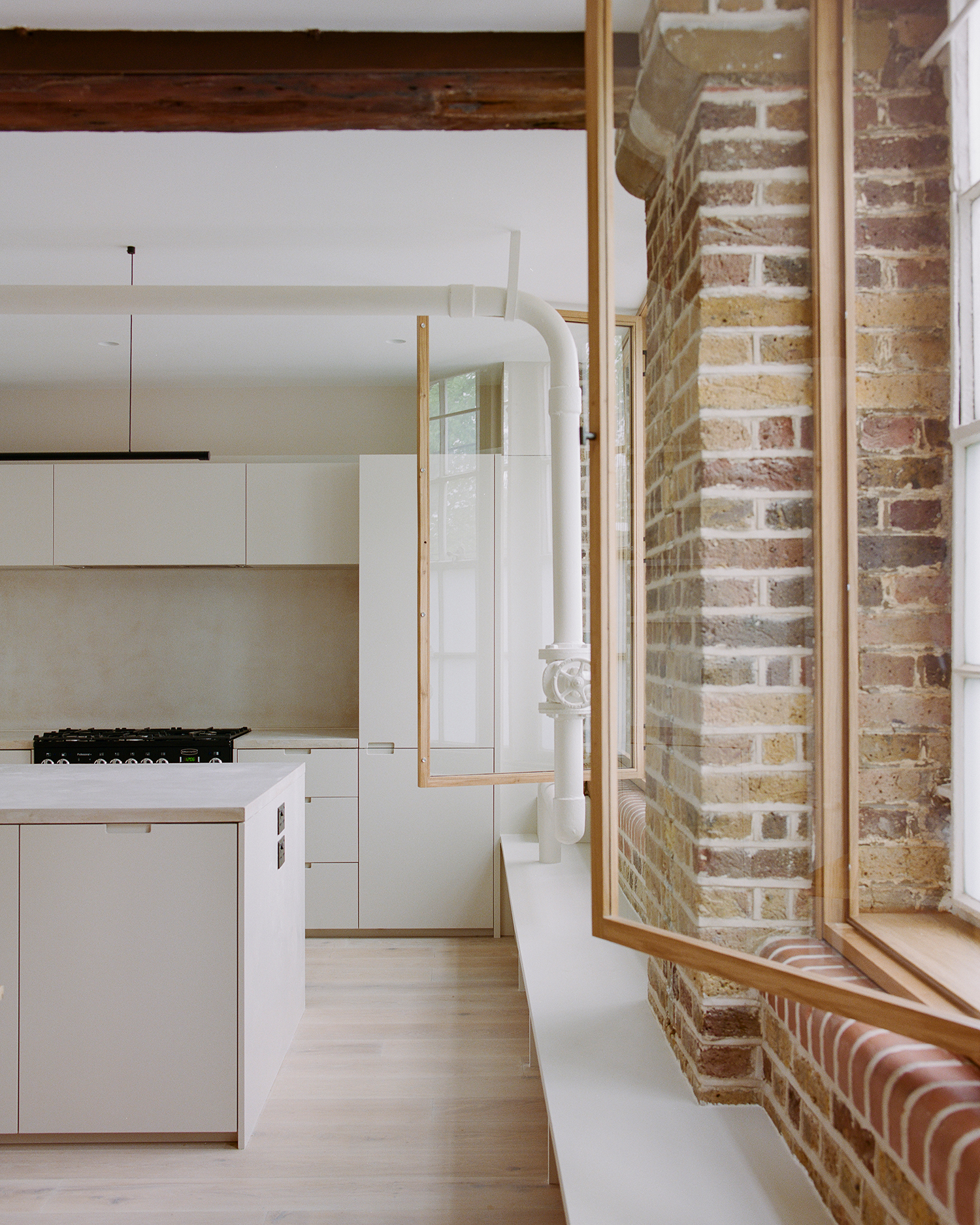 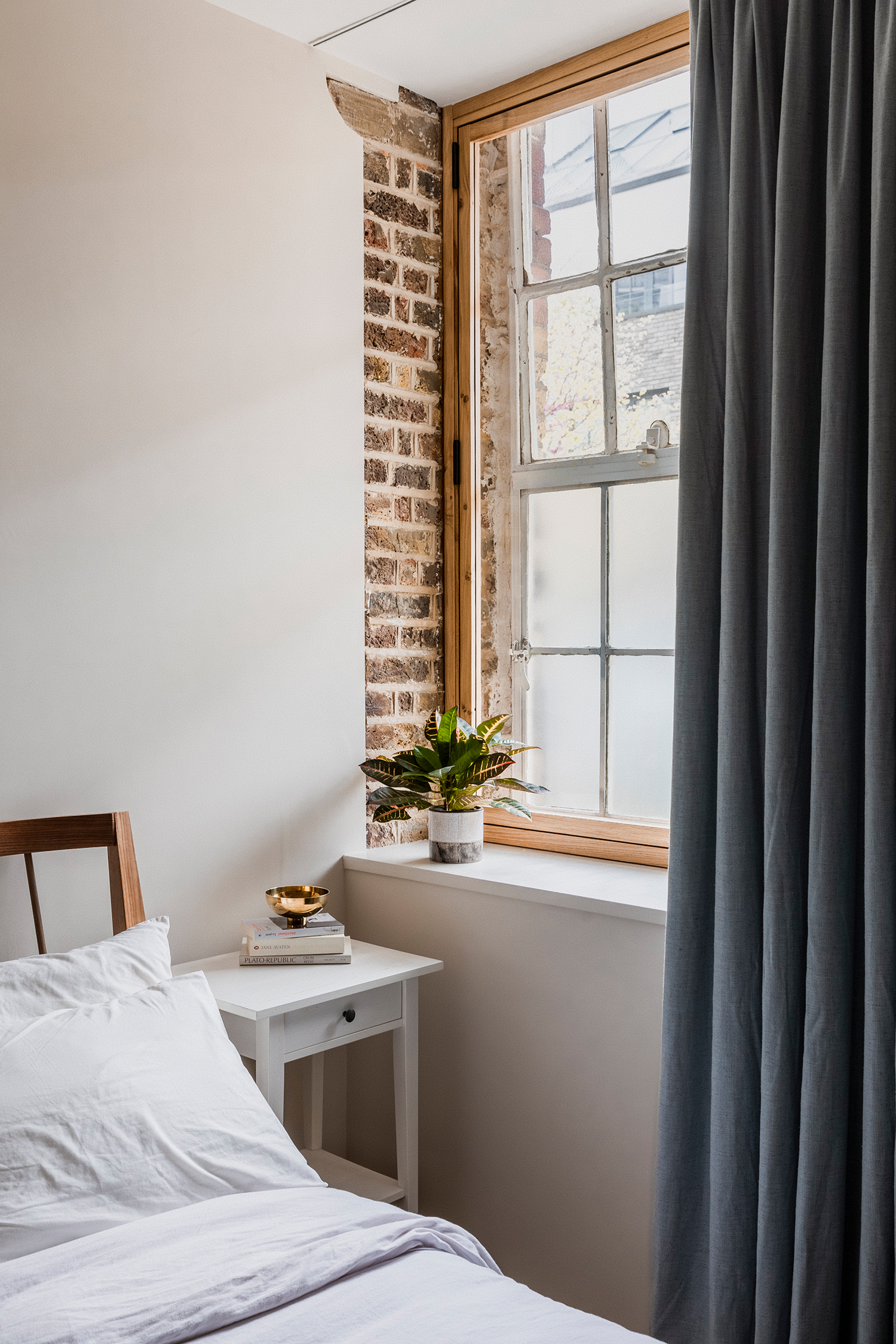 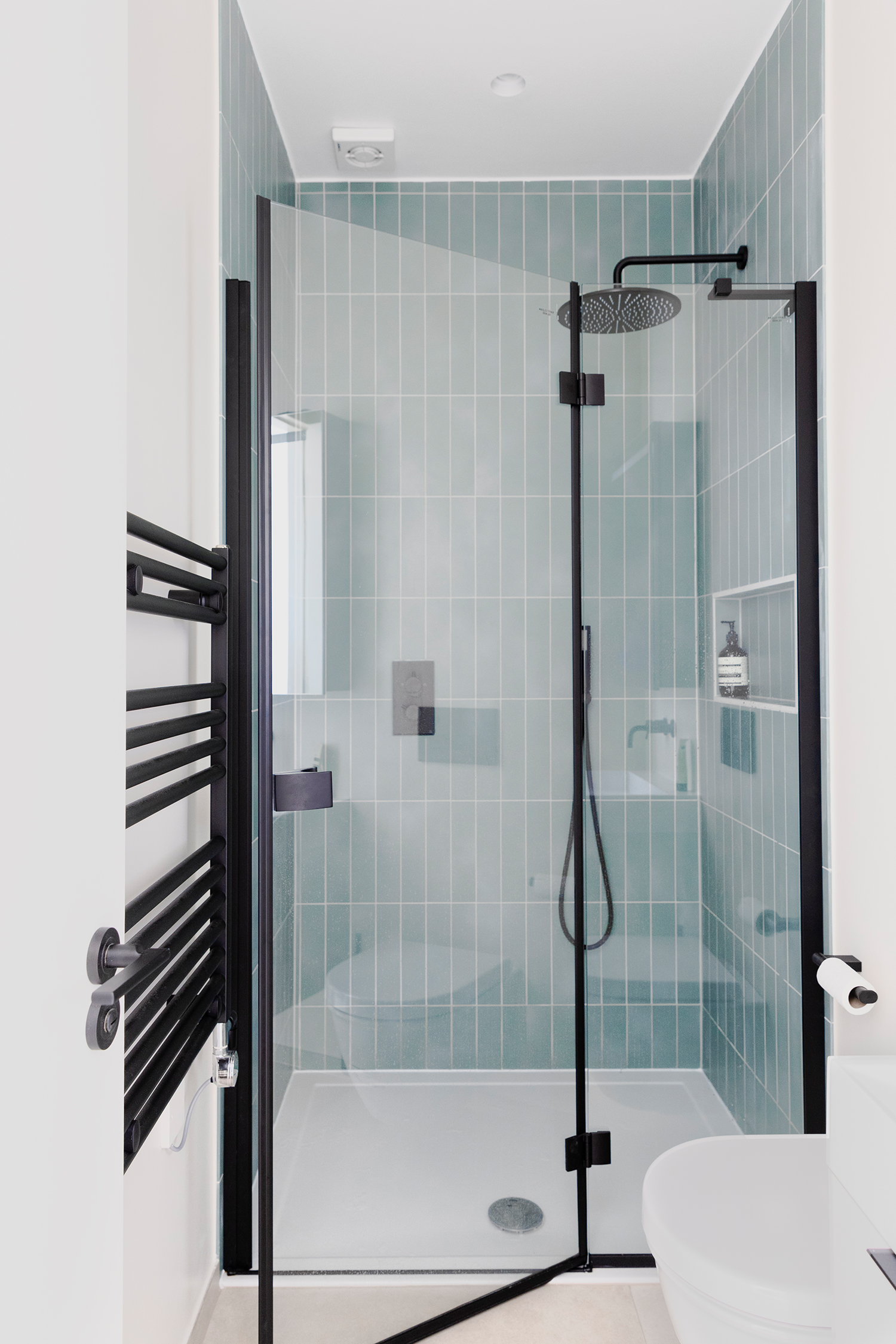