German architect and artist Yadegar Asisi has created a stunning 360 panoramic installation of the Titanic in the Panometer Leipzig, that hosted a full-scale, 360-degree  panorama of Australia’s coral reef in 2015. With a scale of 1:1, the panoramic image covers an area of approximately 3,500 square metres, leading visitors to the sunken wreck of the RMS Titanic, 3,800 metres below the surface of the North Atlantic.

Although the sinking of the Titanic on 14 April 1912 is already over 100 years ago, the Panorama is one of the works of Yadegar Asisi that appeals to the collective memory. The prompt reporting of the event around the world led to the tragedy becoming embedded in the collective memory. The presence of numerous famous passengers on board meant that the sinking attracted a great deal of attention. Names such as Guggenheim or Astor represent these enormously wealthy victims. Numerous filming adaptations of the subject from 1912 to the present also contributed to the notoriety: The best known of these is James Cameron’s 1997 film, starring Kate Winslet and Leonardo Di Caprio. 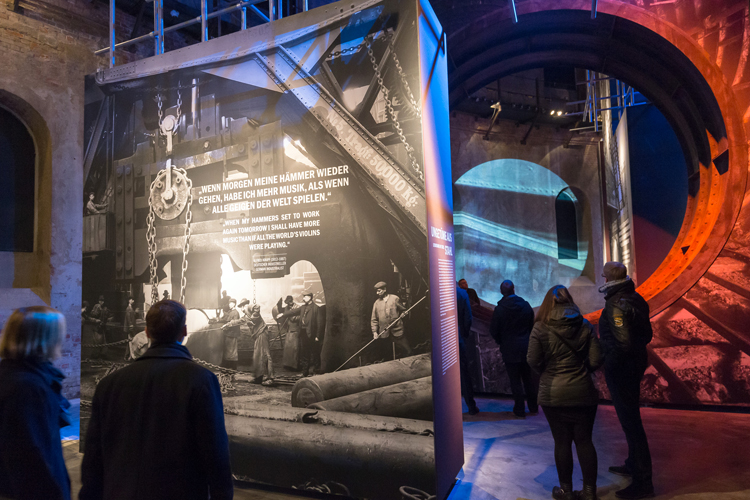 With “TITANIC – The Promise of Modernity”, Asisi not only addresses the actual maritime tragedy off the coast of Newfoundland, he also uses the sunken wreck to promote contemplation of man’s striving to overcome nature, whatever the cost, thereby losing sight of his own limitations and possibilities.

“For me, on the one hand, the Titanic stands for an extraordinary engineering accomplishment, on the other hand, her fate symbolises the hubris of mankind” explain Yadegar Asisi on his motivation. 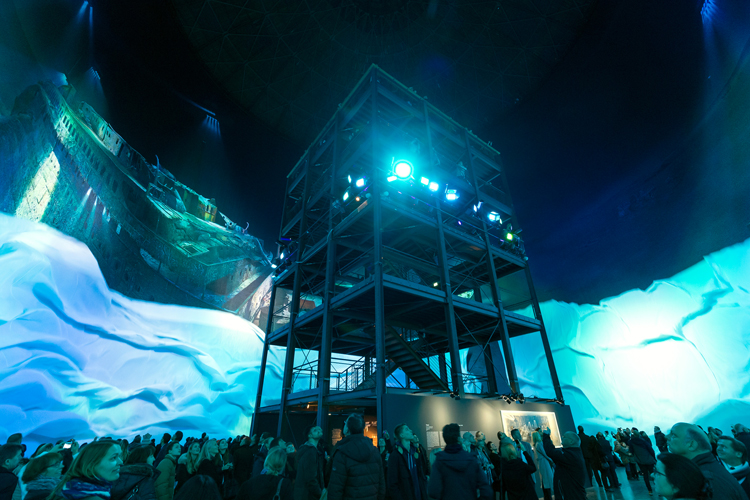 Here the viewpoint of the observer is set some 3,800 metres below the surface of the water at the level of the shipwreck. An artificial light scenario (as with a major expedition) allows the visitor to discover the tragic extent of the disaster. The wreck is broken into two pieces and everyday objects, technical equipment and items of baggage lie around it, underscoring the tragedies of the passengers and crew. 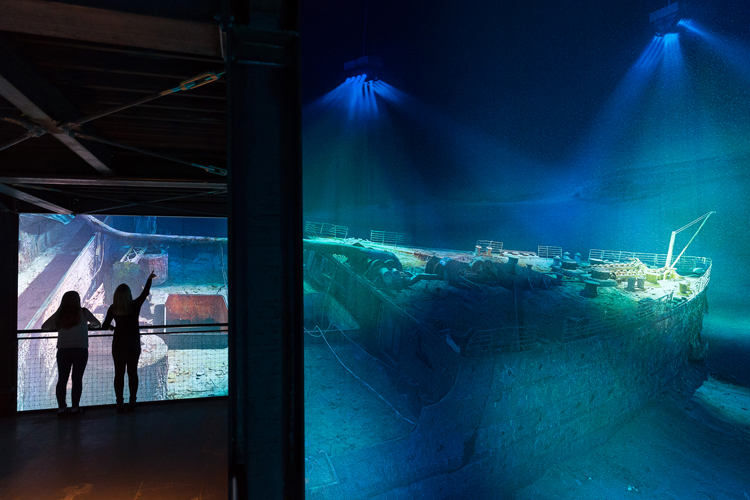 An accompanying exhibition under the leadership of Creative Director Mathias Thiel provides visitors with an introduction to the subject matter. The industrial production and versatile uses of the new material steel for transport, houses, bridges, underground railways and much more besides around 1900 gave rise to a sense of almost limitless opportunities amongst engineers, inventors and steel barons. This was accelerated further with the conquering of the North American West. Things were to be built, designed or driven ‘higher, bigger and faster’. 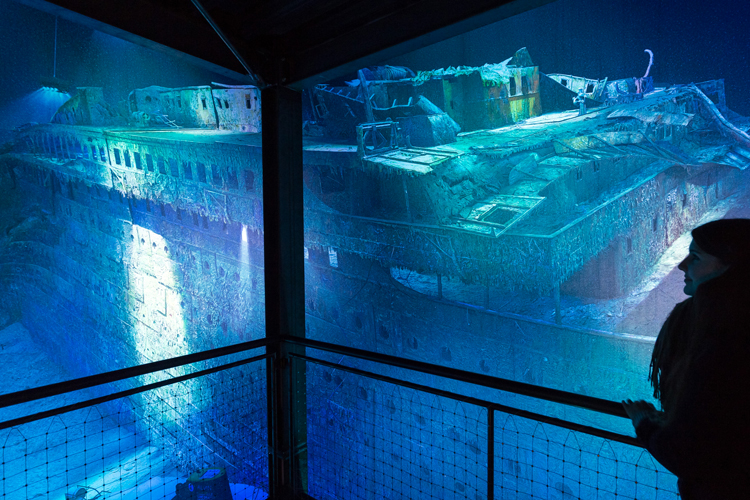 Spacious installation rooms around the Panorama use illustrations from the pinnacle of industrialisation around 1900 to present great achievements, but also daring approaches, paying respect to the technical advances made. After the visitors have passed the 1:1 reconstruction of the enormous bow of the Titanic they reach the Panorama room, in which the wreck can be seen on the sea bed. Thousands of tonnes of steel lie corroding and the once luxuriant furnishings and high-tech equipment of the steam ship is gradually being reclaimed by nature. 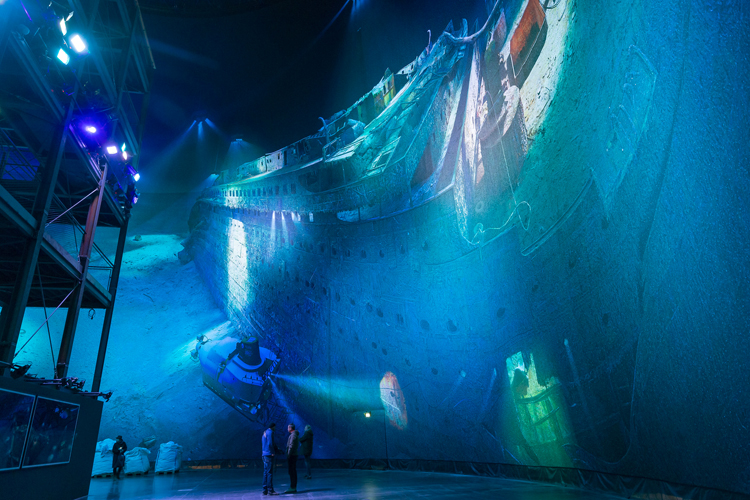 A composition created especially for TITANIC and background noises tailored specifically to the mysterious mood prevailing around 4,000 metres below the surface round out the Panorama experience. Eric Babak, famous from international film and television productions, has been composing the accompanying music to the Panoramas of Yadegar Asisi for twelve years – and has also done so for Titanic.
An extensive pedagogical outreach programme on the Panorama is also offered by the Panometer Leipzig team, providing visitors with an understanding of the subject in a target-group specific manner. Within this framework, various tours, presentations, events and actions will take place. 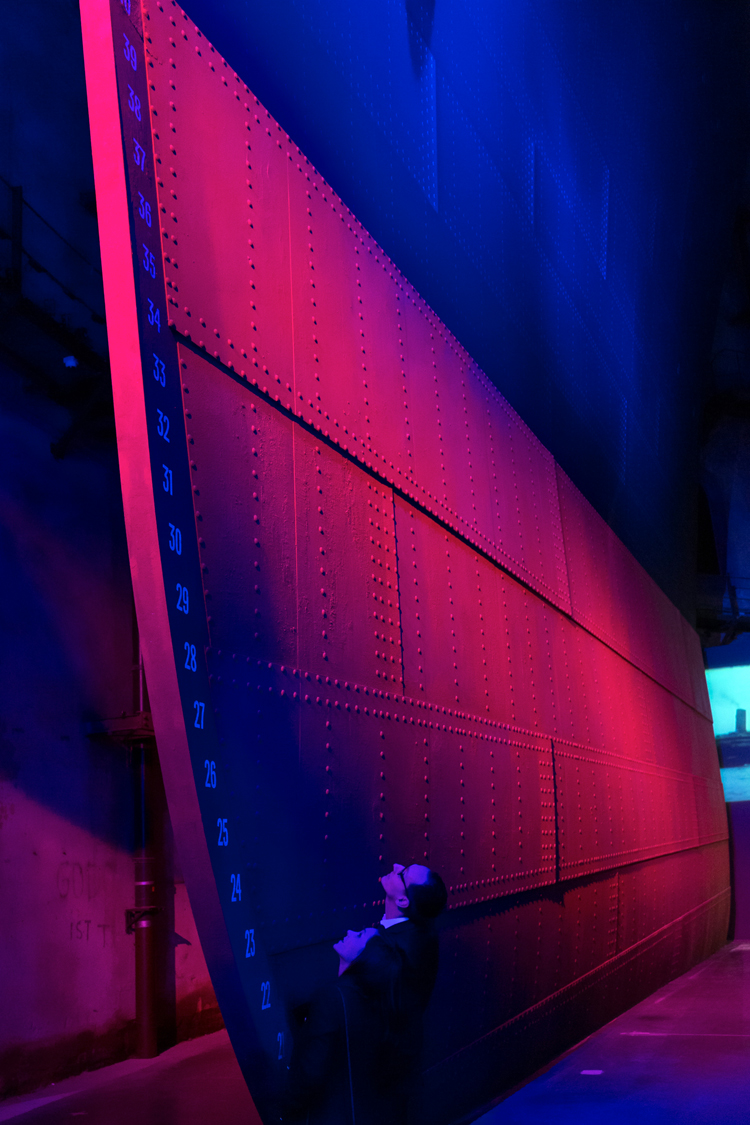 all images courtesy of Yadegar Asisi