At the 57th La Biennale of Venice, Argentinian artist Claudia Fontes ha unveiled the massive installation called The Horse Problem. The installation shows a bullet-time frozen scene in which a horse, a woman and a young man react in different ways to a paradox: a crisis is developing, and its symptoms are, at the same time, the problem that causes it. The scene is inspired in XIX century cultural icons around which Argentina’s cultural identity was artificially built, and challenges them with a surreal breathtaking scene that has the quality of an apparition.

Fontes gathered the ideas for the The Horse Problem from three different sources. The point of departure was the hidden presence of the horse behind the materials the building is made of: wood, bricks and iron could only have been made and put together by horse-power in the times the Arsenal was built. A second contextual aspect taken into consideration by the artist was the building’s original function: the fabrication of cannons and cannon-balls for the ships that were built at the Arsenale from the XIII century onwards, in what is the first historical example of an assembly line, the earliest occurrence of Fordism. 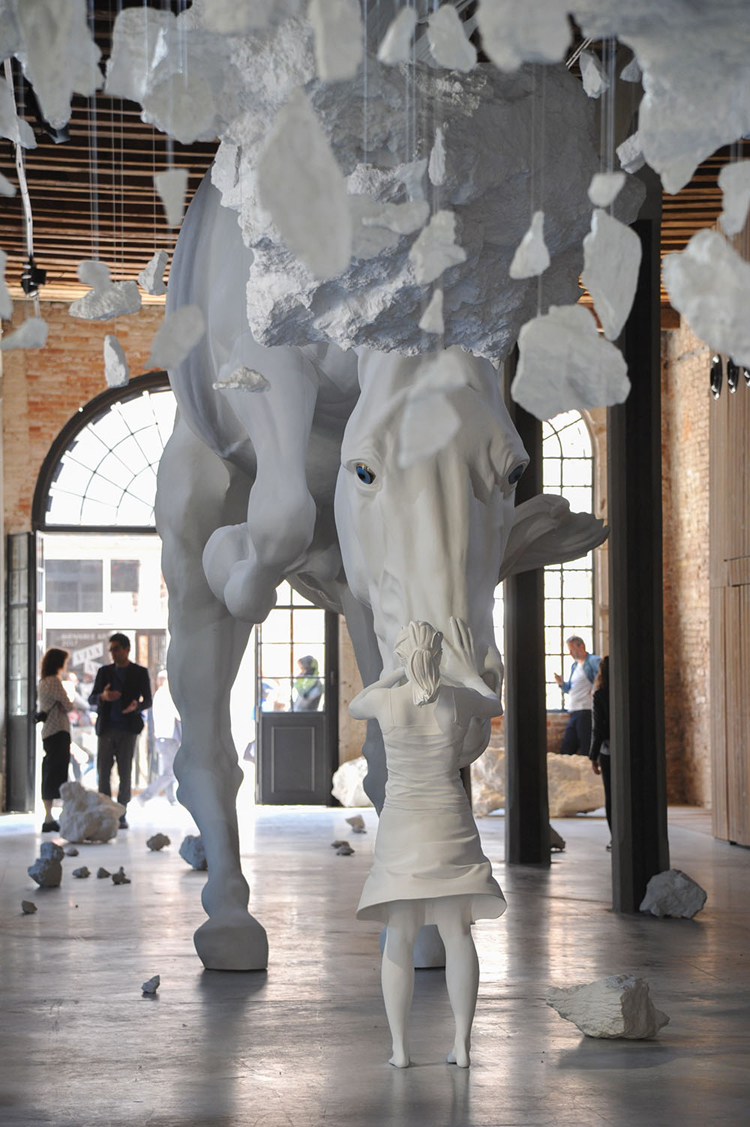 Finally, the history of La Biennale di Venezia as an institution that perpetuates the XIX century tradition of national representations, made Fontes to focus on a critical approach to how the idea of nation developed along history, and specifically in her country. In this sense, the 1892 painting The Return of the Indian Raid, by Ángel Della Valle, is a key reference for The Horse Problem, since it was the first artwork commissioned to an artist with the specific purpose of culturally representing Argentina as a nation abroad. The painting depicts what was understood then as “The Conquest of the Desert,” the violent takeover by the State of lands inhabited by indigenous populations in the 19th Century. 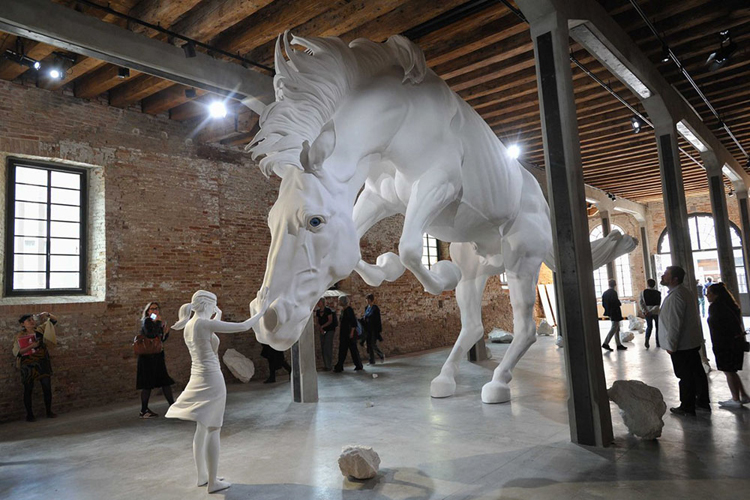 The artist borrowed from the painting those characters who were in a passive role — a white horse and a captive woman — , and set them into action in her own installation, playing along with scale to express the emotions being exchanged amongst these two characters. Finally, in a bold statement, Fontes replaced the riders by the pavilion building itself, with all its historical meaning. But woman and horse are not let alone in their pathos: 400 menacing rocks, a young man and a shadow complete the scene. 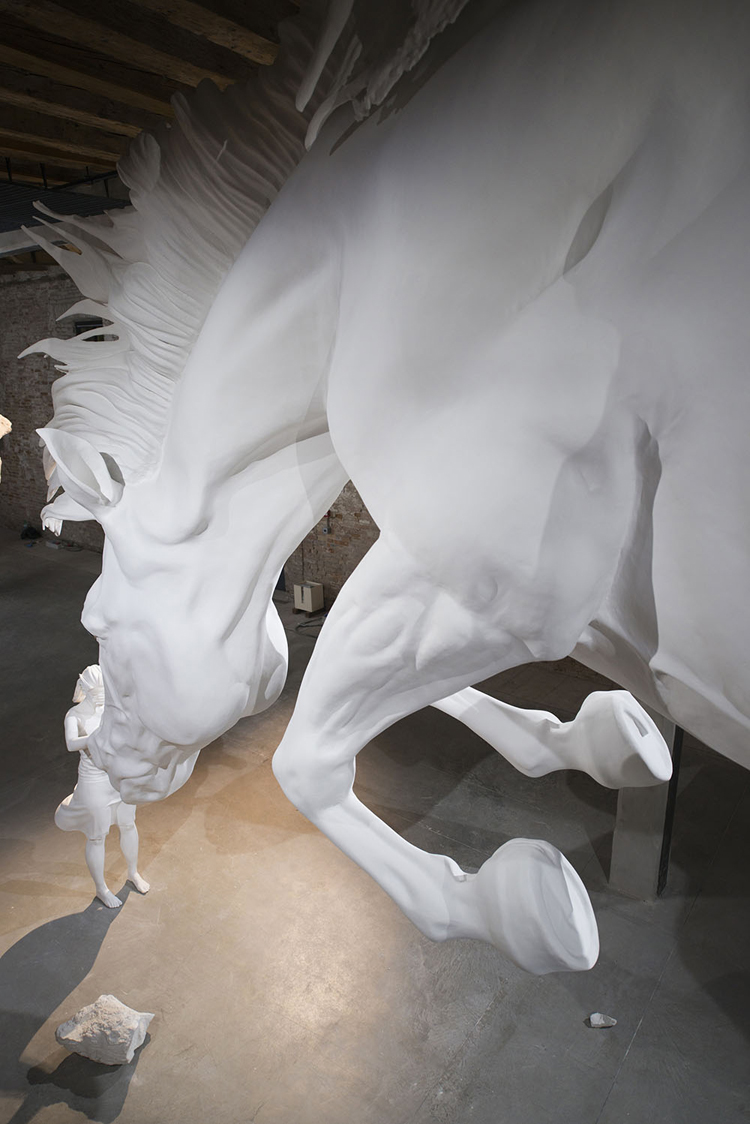 On his essay for the catalogue on The Horse Problem, writer Gabriel Giorgi says: “The horse, the protagonist of capitalist and colonial narratives of the extraction of the natural and its reconfiguration into a resource—which was, and continues to be, the dominant mode of inscribing Latin America in global imaginaries—here jumps, bucks, and kicks at standard temporalities and forms, and brings with it, as a problem, the question of another possible and also urgent form of relation, between human and animal—and, therefore, other forms of relation between bodies, another between bodies. It suggests that human and animal not remain trapped in the narrative of domination and control that are the only ones that capital has been able to invent.” 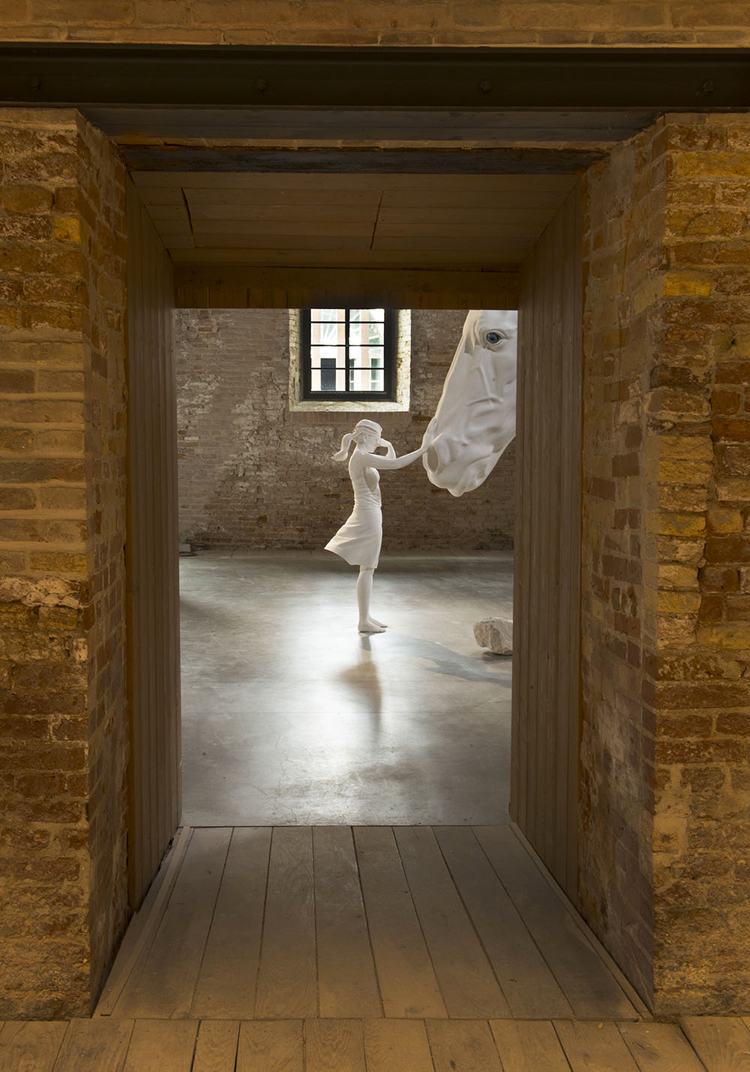 Fontes’ work can be read as an open question about the possibilities of reversing colonisation in its multiple manifestations. By highlighting how the destinies of the human and horse species have been intertwined through exploitation from the very moment that horses were domesticated, The Horse Problem offers in a flash, a way to reinterpret history in a different way, a chance to construct an alternative narrative for our future as species.

The Horse Problem is curated by Andrés Duprat, director of the National Museum of Fine Arts of Argentina, and will be on view during the Venice Art Biennale through November 26, 2017. 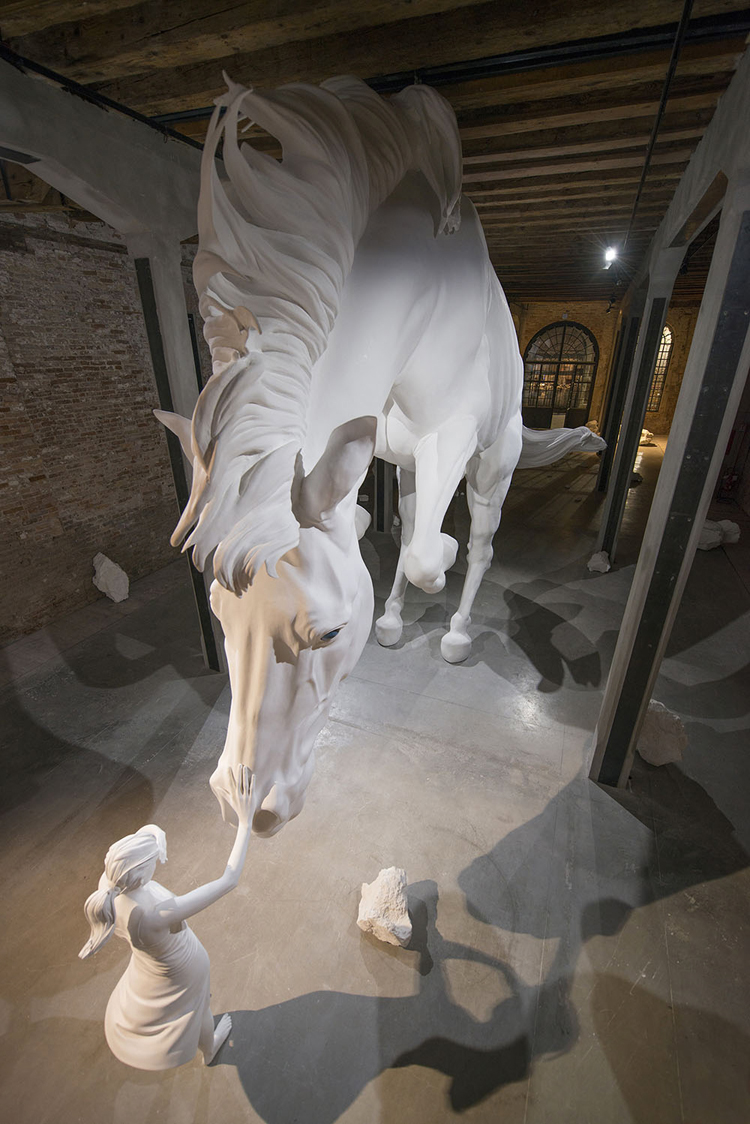