Conceived by Berlin-based design and digital art studio Onformative, True/False is a kinetic light sculpture composed of arrays of circular black metal segments set in mechanical columns, that reveals the beauty of a unique algorithm. Interlocking and rotating around fluorescent light tubes, the cylinders cover or expose the light to display an endless number of patterns. The transformation of the sculpture is based on the shifting elements and their correlation to each other. As the segments do not move independently, for any of the cylinders on a column to change, the segments affected must work in unison to achieve the command. 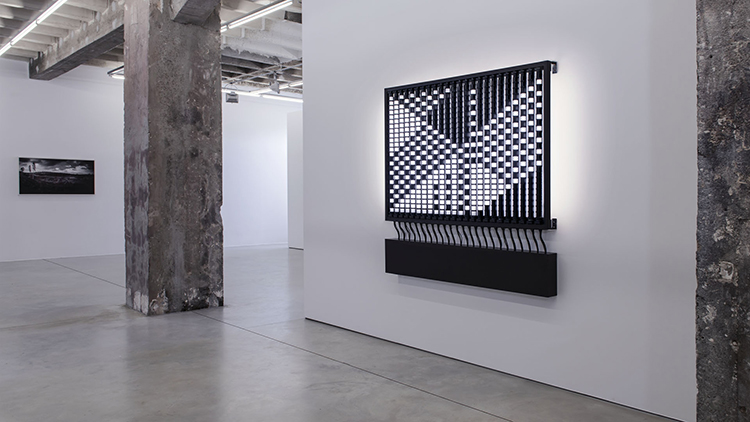 True/False is a machine that constantly generates instructions to reveal images and assigned patterns according to its algorithm. It visualizes the computational process and exposes the implementation of these commands. As the piece transforms into the assigned motif, it completes the procedure and continues on to the next task. It is a veritable machine at work as it executes instructions and makes the algorithm and transformation between the images visible. Akin to the mythology of Sisyphus, this labour is perpetual and never-ending.

Reminiscent of devices originally used for calculations, such as Turing machines, the sound originates from the mechanical movement of the moving parts thus making the algorithm audible. The rhythm of True/False is captivating as variations in the visual choreography result in distinctive changes in its soundscape.

Through the generation of algorithmic patterns and the repetition of endless tasks, True/False transforms itself into something more than the sum of its elements to reveal the beauty hidden within a basic algorithm.

all images and video courtesy of Onformative