On the occasion of Miart 2019, Fondazione Adolfo Pini hosts the exhibition “The Accursed Hour” by Mexiacan artist Carlos Amorales. Carlos Amorales is interested in language, images and their transformation. More generally, he takes an interest in communication systems, their constant renewal, their potentialities and pitfalls; as well as the mechanisms that allow particular narratives to emerge at the expense of others; and, by extension, the issue of dominant representation, the manipulation of communication and thought. In his work visual art, music, animation and poetry converge, all interpreted, with great formal rigor, through a deep awareness of the present time and its tensions. 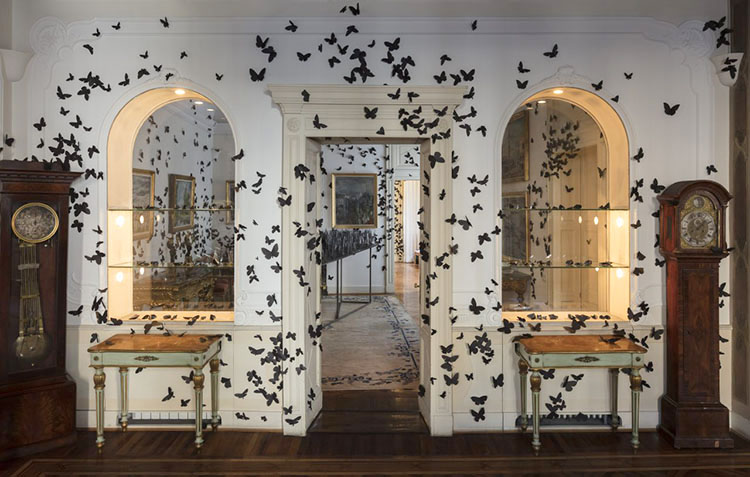 For Fondazione Adolfo Pini, Amorales has conceived the exhibition “The Accursed Hour”, which focuses on his life-size installation Black Cloud and on various elements from the project Life in the folds. The exhibition also include silhouettes and other works by the artist, in a continuous shift between images and signs.

With Black Cloud, a swarm of thousands of black butterflies will invade the premises of the Foundation starting from the staircase at the very entrance. 15,000 butterflies populate the new and the already existing spaces of the Foundation. With Life in the folds, the artist will scene the theme of human violence against other human beings. A kind of violence that lies deep within and that can explode in unjustified ways. The project also includes an animation video that tells a dramatic story while at the same time showing the hands of a puppeteer moving the characters’ threads: a metaphor of the mystification to which history and our own actions are subjected, both whether we are aware of it or not.

From this central nucleus stems a variety of transpositions. Among the others: a large installation and a series of ocarinas, each of which has the shape of a sign and which all together create a coded language that can be both “read” and “played”. Their sound is also used as the video’s soundtrack. Some shapes appear on the walls of the Foundation as if they went through them: they are human silhouettes and seem to hold some papers in which the salient moments of history are represented. The exhibition will also include the story-board in which the video’s charactersand story come to life for the first time. 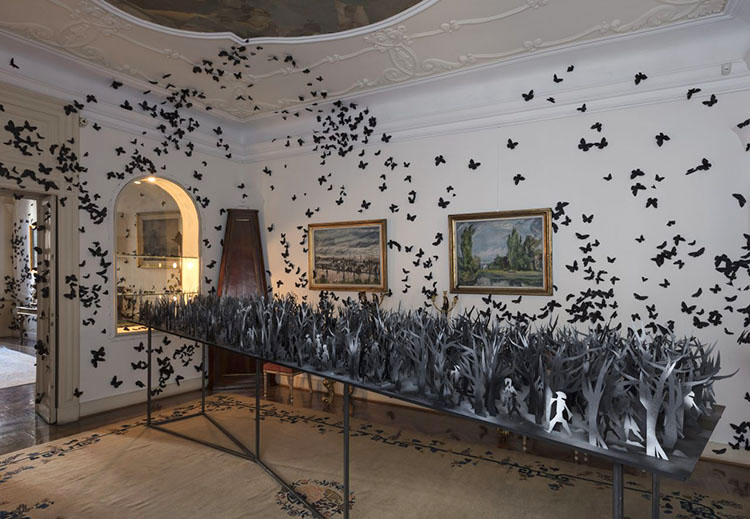 With this exhibition, Amorales refers to his country, Mexico, while at the same time showing extremely current discrepancies and tensions throughout the world, and the need to identify the origins of our ghosts, to recognize their scope, matrix, and ideological value.