Until September 1st, Tai Kwun Contemporary will host MURAKAMI vs MURAKAMI, a major survey exhibition by the Japanese artist Takashi Murakami. The exhibition explores the multifaceted universe of the cultural phenomenon of this Japanese super-star artist. Curated by Tobias Berger, Head of Art at Tai Kwun, and Gunnar B. Kvaran, Director of Astrup Fearnley Museet (Oslo, Norway), MURAKAMI vs MURAKAMI features divergent extremes of the artist’s oeuvre — from his large-scale post-apocalyptic works to his optimistic flower pieces, and then to his contemplative Enso paintings, offering Buddhist visions of enlightenment. 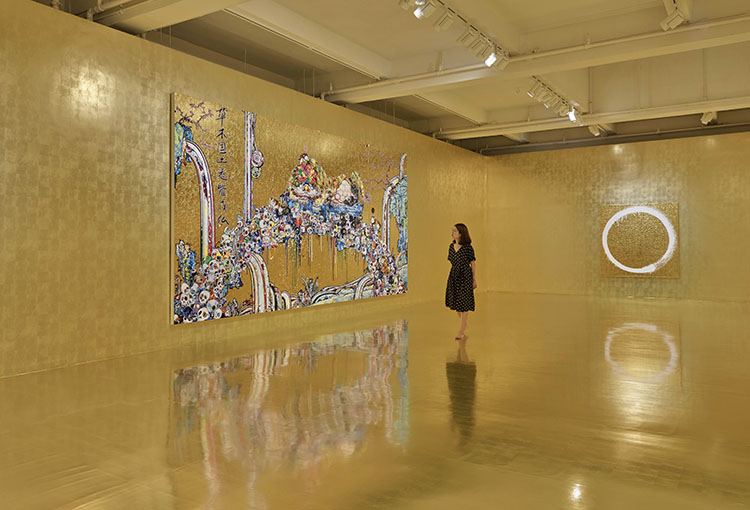 Also on view for the first time is a showcase of some of the artist’s iconic and outlandish costume designs, which visitors will experience alongside other important video works, samples of his private art collection, as well as the artist’s spectacular wall and floor art — which serves up a forceful yet complex visual impact.

Utilizing all spaces in the art galleries at Tai Kwun, this comprehensive survey will feature over 60 paintings and sculptures in a stunning, immersive setting that showcases the intriguing paradoxes embodied in the diverse work and life of Takashi Murakami.

The main hall of 3/F encapsulates Takashi Murakami’s mélange of high and low, elite art and pop culture. Under the cute surfaces, however, lurk darker visions of trauma and pain, forging strange and singular scenes of a dark wonder. This in part reflects the artist’s anxiety about nuclear power, especially in the wake of the Fukushima nuclear meltdown—but also echoes the broader postwar trauma in Japan that resulted from the detonation of two atomic bombs and the subsequent flood of American culture. 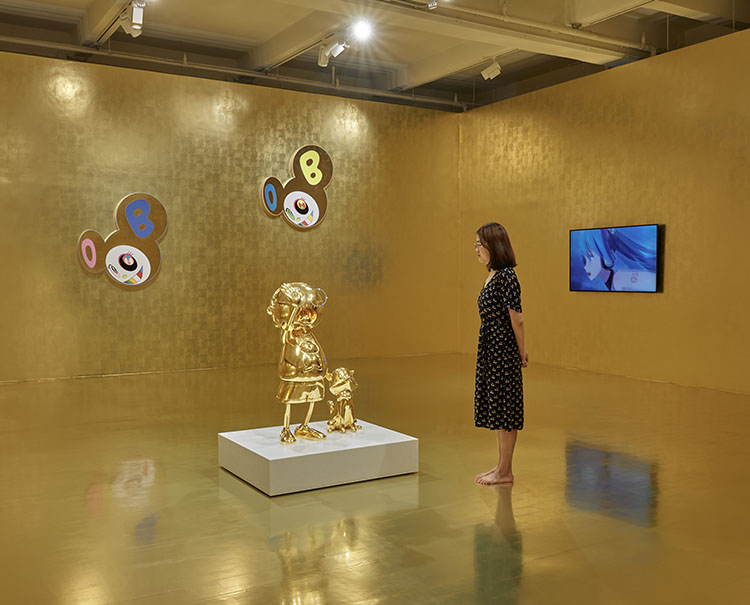 The figures of Tan Tan Bo, based on a manga character by Mizuki Shigeru that was Murakami’s favorite when young, appear as phantoms writhing while spewing out bodily fluids in glorious psychedelic color. Such combinations of a cute “kawaii” aesthetic with something gloomier can be unsettling. Not only do they reflect the artist’s personal sense of cracking under pressure but also envisions possible apocalyptic futures for humanity.

The highlight of the room is the large gold-leaf clad 4.5-meter-tall sculpture The Birth Cry of a Universe, shown here for the first time in its final version after 14 years of preparation, presents a majesty flustered and disturbed, collapsing under its own weight in formal deterioration. The floor art of skulls, too, forces visitors to traverse a scene of devastation— as visceral memento mori, a reminder of the vanity of earthly goods and pursuits. 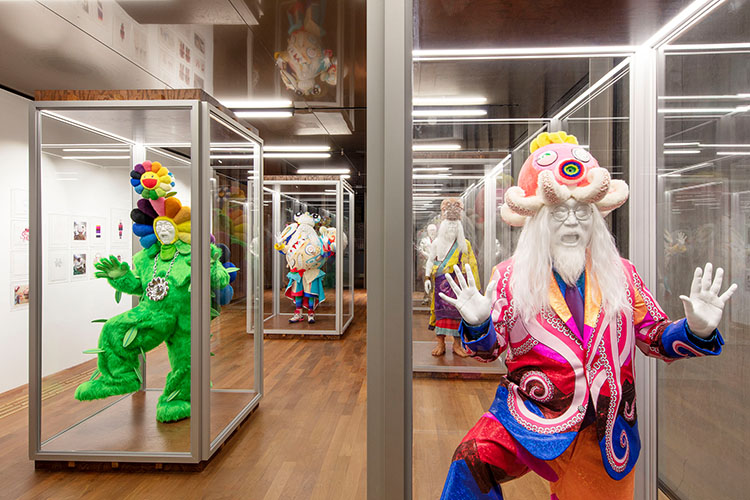 While Takashi Murakami is certainly a pop icon the world over, he, in fact, has a deep understanding of art history, with a PhD in traditional Japanese painting (Nihonga). Over the years, the artist has also built a remarkable collection that reflects his historical rigor and eclectic tastes. Also on view is a selection of his art collection—in total numbering thousands of works and items—with works by postwar artists who influenced him, from Japan to the West. The pieces chosen were driven by nostalgia, reaching back to the roots of his own career, as well as a respect for great artistic geniuses. 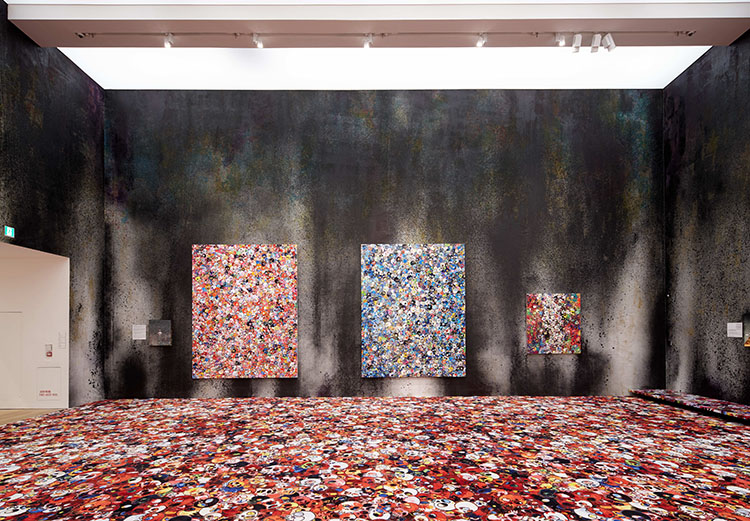 Takashi Murakami is known for dressing up, partaking in zany “cosplay” which one sees in Japanese subculture. The artist sees himself as somewhat of an “otaku” and claims modestly that with a weakness in speaking English, he communicates and achieves attention with his costumes—which perhaps also serve as an armour against the rarefied world of contemporary art. Eight colourful costumes of his are now shown for the first time in an exhibition setting. 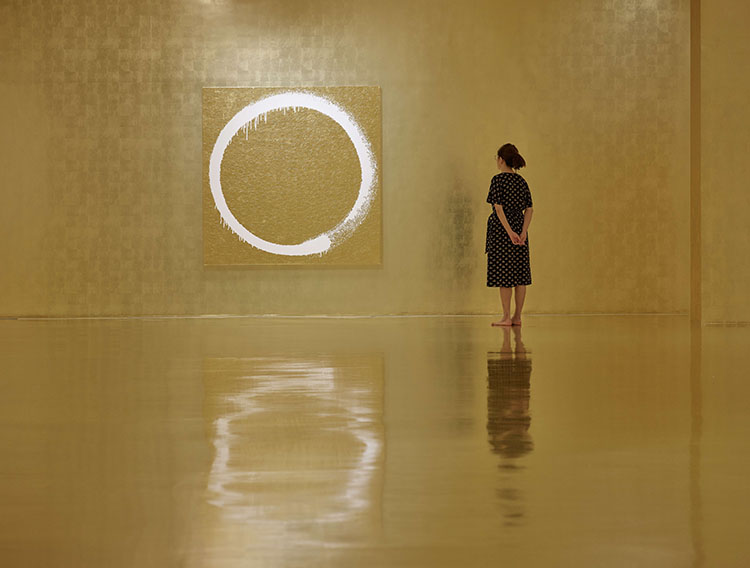 Takashi Murakami has long been fascinated with the British artist Francis Bacon, seeing a kindred creative spirit in Bacon’s disturbed, unbalanced inner world. Drawn to the way Bacon expressively distorts bodies and faces, Murakami transforms the images with his characteristic surrealism—faces protruding from faces, appendages sprouting forth from mouths—in the motifs of his artistic iconography. Since the early 2000s, Murakami has pursued this multifaceted series as part of his broader homage to artists both Western and Japanese. In many ways, the multiple layers in his Bacon works, with inner psychological turmoil resulting in a dark yet beautiful final expression, encapsulates the complex trajectories present in the exhibition. 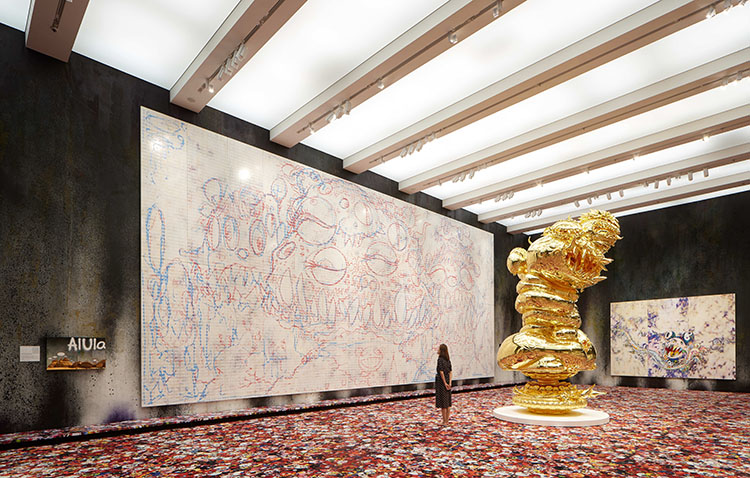 Tan Tan Bo—which is also a reincarnation of Mr. DOB, which in turn is an alter-ego of Takashi Murakami—is based on a manga character by Mizuki Shigeru. Here we see the meticulous preliminary sketches in preparation for a final painting with its perfectionist aesthetic. Viewers can scrutinize the exhaustive research, the attention to detail, and endless rounds of editing that goes into the production of every “Superflat” work. 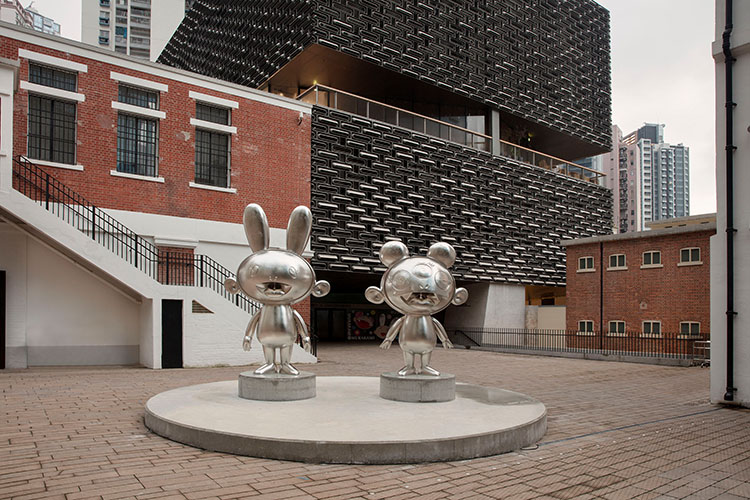 One steps in a room of overwhelming affective power—generated in no small part by Takashi Murakami’s signature flower icons, obsessively and repetitively combined and presented. Takashi Murakami himself has elaborated the concept of “Superflat”, which refers not only to the perspectival flatness on the picture plane in Japanese art, but also ushers in the rejection of hierarchical divisions between high and low art, and of society itself. With his abiding interest in art history, these works also allude to Abstract Expressionism’s explorations of allover compositions. 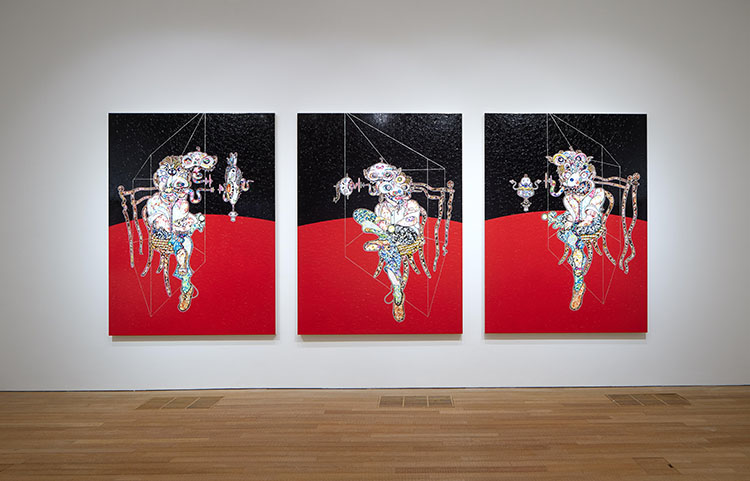 Covered wall to ceiling in gold, this room serves up a forceful yet complex visual impact. On one level, this gestures towards Andy Warhol’s silver Factory, a studio decorated in tin foil and silver paint. In many ways, Murakami’s creative approach resembles that of Warhol’s: repetition in variation, commingling of high and low, erasure of boundaries between the canonical and the popular, as well as the scaled-up production of the studios and an eye for commercial and promotional impact. On another level, however, his usage of gold equally recalls the sacred aura of religious icons, figures, and spaces throughout history. With the Enso paintings, Murakami moreover harks back to Japanese tradition. As a motif, the Enso (literally “circle”) symbolises emptiness, unity, and infinity in Zen Buddhism; here, some are spray-painted over gold and silver, while some are painted over embossed patterns of skulls. The artist thus offers a meditative space to reflect on nothingness and finitude—a contemplative finale to the exhibition MURAKAMI vs MURAKAMI. 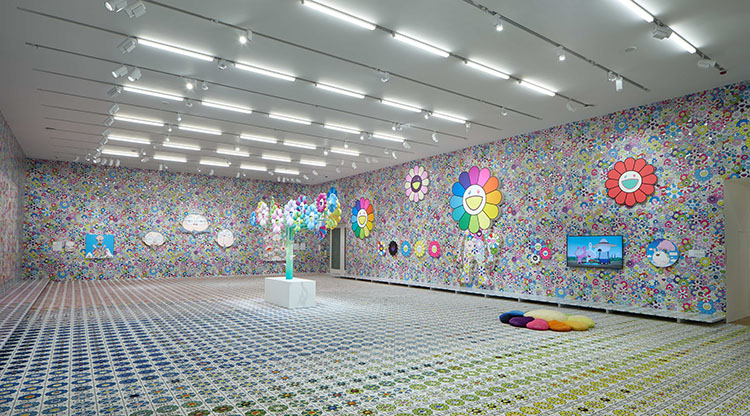 At once playful, lively and devoid of obvious meaning, Kaikai and Kiki features two mischievous characters that reoccur in Takashi Murakami’s artistic practice. “Kaikai” is the child figure with the rabbit ears while “Kiki” is the figure with three eyes and fangs for teeth. “Kaikai Kiki”, which are inscribed on their ears respectively, can be translated as “supernatural” or “weird” and was the phrase used to praise the blend of weirdness and refinement in the works of the sixteenth-century Japanese painter Kanō Eitoku. “Kaikai Kiki” also happens to be the name of Takashi Murakami’s art management and production company. In a characteristic “Superflat” style that flattens meanings and depth, these two sculptures at the same time stand in for the artist’s company as mascots of the brand while also reflecting the consumerist visual economy that Takashi Murakami has always explored and intervened in. Kaikai and Kiki are the first outdoor sculptural works by Takashi Murakami since his exhibition at the Château de Versailles. 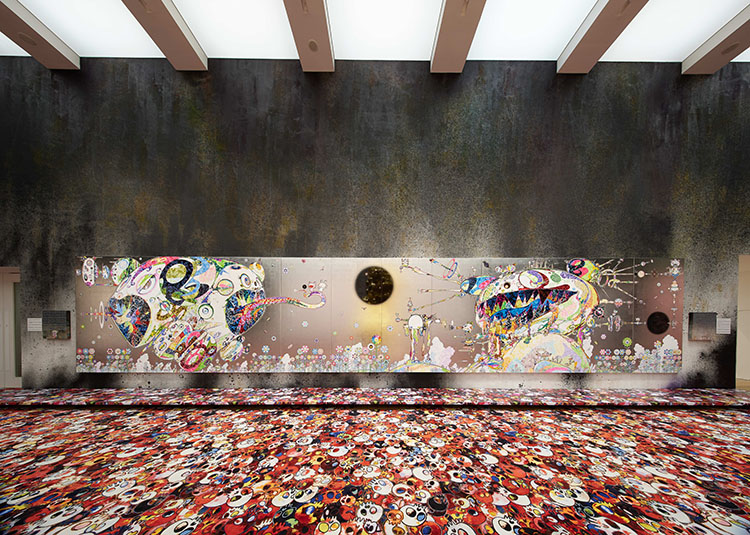 Over the course of three months, Tai Kwun Contemporary will host a wide range of public programming and educational events. These include videos by Takashi Murakami to be screened regularly on the Laundry Steps, as well as a public discussion with Takashi Murakami, Gunnar B Kvaran, and Tobias Berger. Other events slated to be present include frequent guided tours, educational workshops, public talks, anime and film screenings, among others.