The 6th edition of Passages Insolites (Unusual Passages), has kick-started from the 20th of June till the 14th of October 2019, in Québec City. The event brings together 14 artworks produced by 40 local and international artists and architecture collectives whose work plays on the idea of “unusual passages” by putting unexpected elements in the pathways we normally take for granted, posing profound questions about societal issues and the world around us.

Conceived and produced by EXMURO arts publics, curated by Vincent Roy, and presented by the Ville de Québec, the circuit is an unparalleled showcase for artists and architects from Québec and around the world. Sometimes flamboyant, sometimes introspective, always surprising, these works together present a deeply contemporary take on the urban space they inhabit.

In addition, they have also launched a special program that allows these interventions to travel to cities around the world, 4 works have been shown in Longueuil, Québec and 3 will get to travel to Philadelphia’ s Flow exhibition in October.

Read on for some of the interventions and the descriptions from the artists. 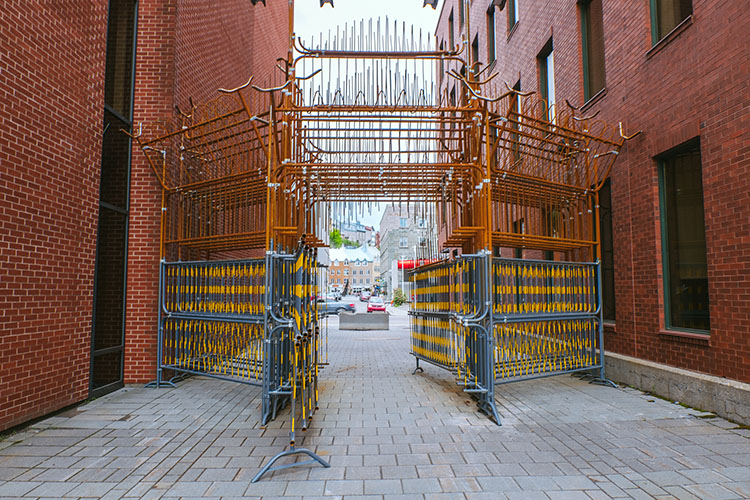 A metal gate constructed from security fences marks a fictitious border. The openings present seem to have been forced. This barrier appears austere and intimidating, but a closer look reveals handcrafted ornamentation, which makes its presence less intimidating while sowing doubt about its true function. BGL has created an ambiguous work exploring the precarious balance between the need for control and freedom, between following the rules and letting loose.

BGL is a collective composed of Jasmin Bilodeau, Sébastien Giguère, and Nicolas Laverdière, known for installations that take over places and spaces. Described as “provocative, critical and explosive”, their work is rich in humour, and finds inventive ways to make poetic statements that also draw our attention to social and political issues. 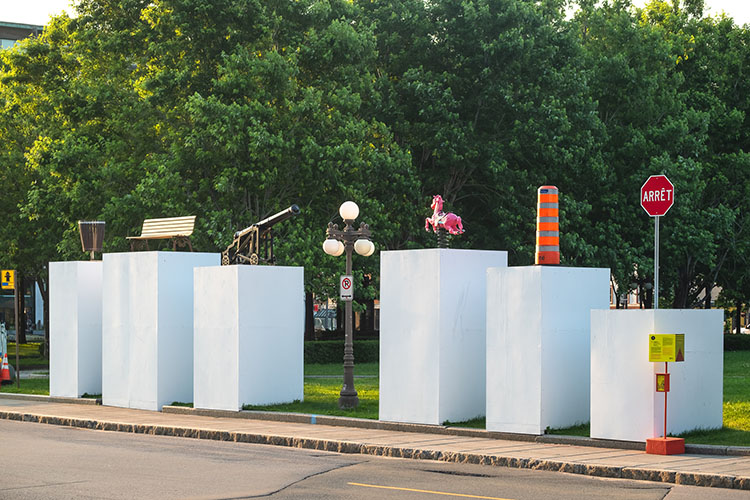 Unremarkable features of the public space—street furniture such as the common bench—are placed on massive plinths arranged at the same level so as to obviate all hierarchy. With On Equal Footing, the artist questions the way we consciously and unconsciously classify the objects all around us, especially the consecration of official heritage elements. Why would a canon—a weapon designed to kill—a more important emblem of the city than a child’s play set, a lamppost, a park bench, a cone, or even a trash can?

Guillaume La Brie is interested in issues surrounding how visual art is presented. He views the conditions under which we experience a work (the observer’s position, physical relationship with the exhibition space, etc.) as integral parts of the artwork that can be transformed or modified, in the same way that artists work with color and form. 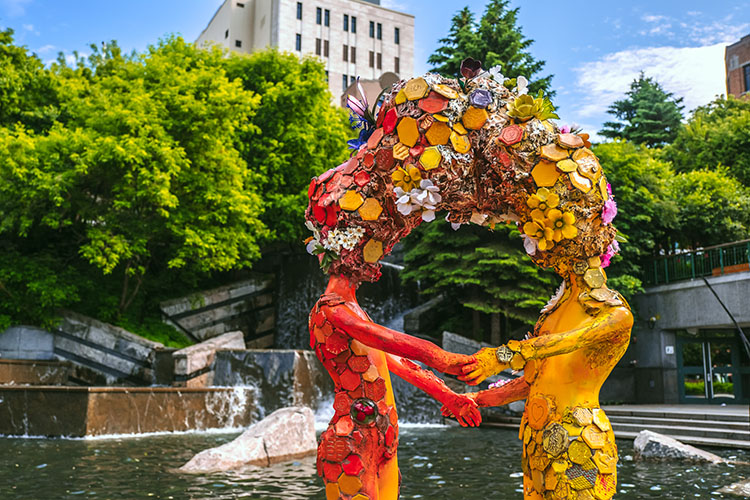 Reflecting the diversity of people who take part to the project (R)ASSEMBLER (Togetherness), a range of hybrid bodies inhabit the installation space, covered in small elements from “hexagon-spangles” to everyday objects that are crafted at public workshops—the fruit encounters between artists and participants. Dreamers’ Echo grows out of an inclusive, sensitive co-creation experience where everyone gets the chance to get their hands dirty and collectively create a maelstrom of matter and memories.

(R)assembler / Togetherness draws on the idea of “coming together to work together,” and uses a co-creation process to match participants of three community organizations with a duo of artists. This inclusive project includes a series of workshop meetings that culminate in the realization of a collective public art work.

Formed in 2017, the Caravane BLING BLING! duo of Mathieu Fecteau and Loriane Thibodeau focuses on meeting other artists for unusual collaborations that play on notions of veracity and falsity and creating works with multiple hidden details. 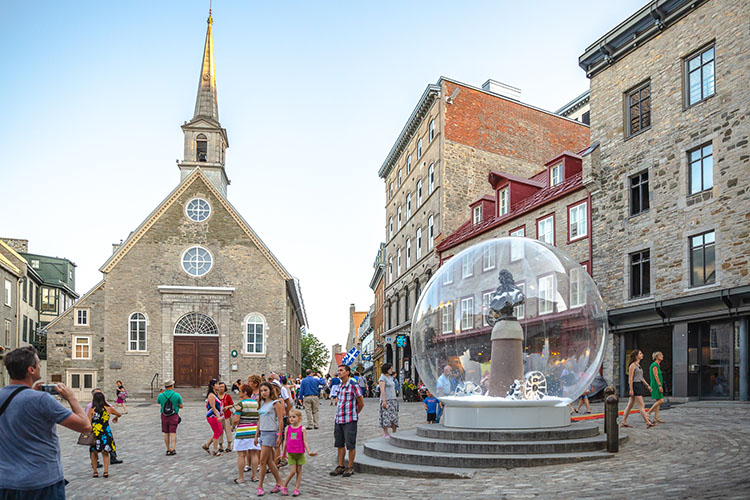 For a single summer, Eternal Snow will stand as a reminder to all of the rigours of Quebec winters. The bust of Louis XIV, trapped in an eternal snowstorm, is the centrepiece of this oversized snow globe—an item normally bought as a souvenir, but here transposed on a monumental scale to represent an imagined meeting between the Sun King and winter, that most emblematic of seasons in Quebec. Though the bust seems to dominate, it is the snow that becomes the object of memory here. By capturing a “sample” of winter, the installation rises above the passage of the seasons, bringing two climates into coexistence.

The art of Lucie Bulot (architect and interior designer) and Dylan Collins (architect and musician) seeks out new pathways to interrogates their architecture practice by engaging with other ways of making such as land art and installation. They envision each project as a form of storytelling constructed from diverse knowledges, places, and materials. 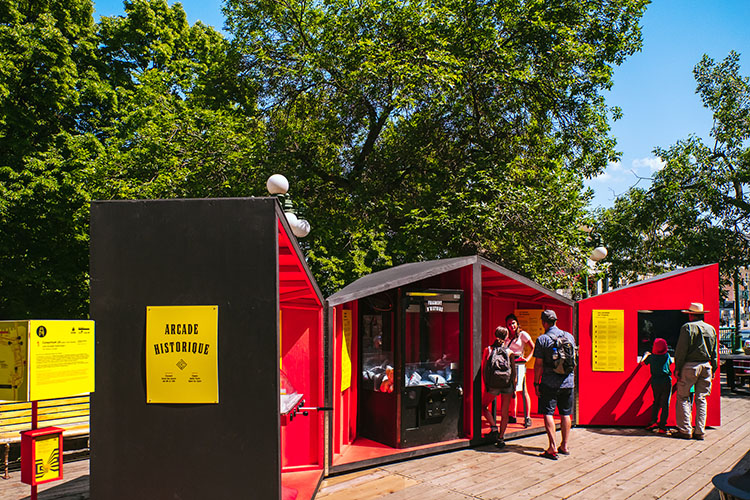 Who said history can’t be fun? Consortium 19 literally makes history into a game by “putting into play” a large cast of characters and milestones of Quebec’s history. Players can create new clashes between characters in a video game, try to win a stone fragment from a now-destroyed historic building, recreate the story of Alain Côté’s famous air hockey goal, or join a canoe race pitting eminent figures from the history of Quebec against each other. This piece promises a truly historic level of fun!

This work reconstructs an improbable dwelling formed by gathering and assembling large quantities of boards recovered from wooden pallets. Presented in a large window reminiscent of both shop windows and exhibition spaces, Interior with Amenities evokes paradoxes: the space is habitable but inaccessible, occupied but not functional, private yet continually exposed to anyone who looks. The artist deliberately distorts perspectives while examining issues around the urban habitat and its precariousness.

Olivier Moisan Dufour’s process involves piling and stacking reclaimed wood, and is marked by his propensity for leaving traces of previous projects in his new ones. He will often painstakingly paint his sculptures order to fix their state, in a process akin to immortalizing a moment in the history of an ancient object.

Interior with Amenities won the 2019 Passages Insolites competition, organized in collaboration with the Université Laval faculty of art and GM Développement. 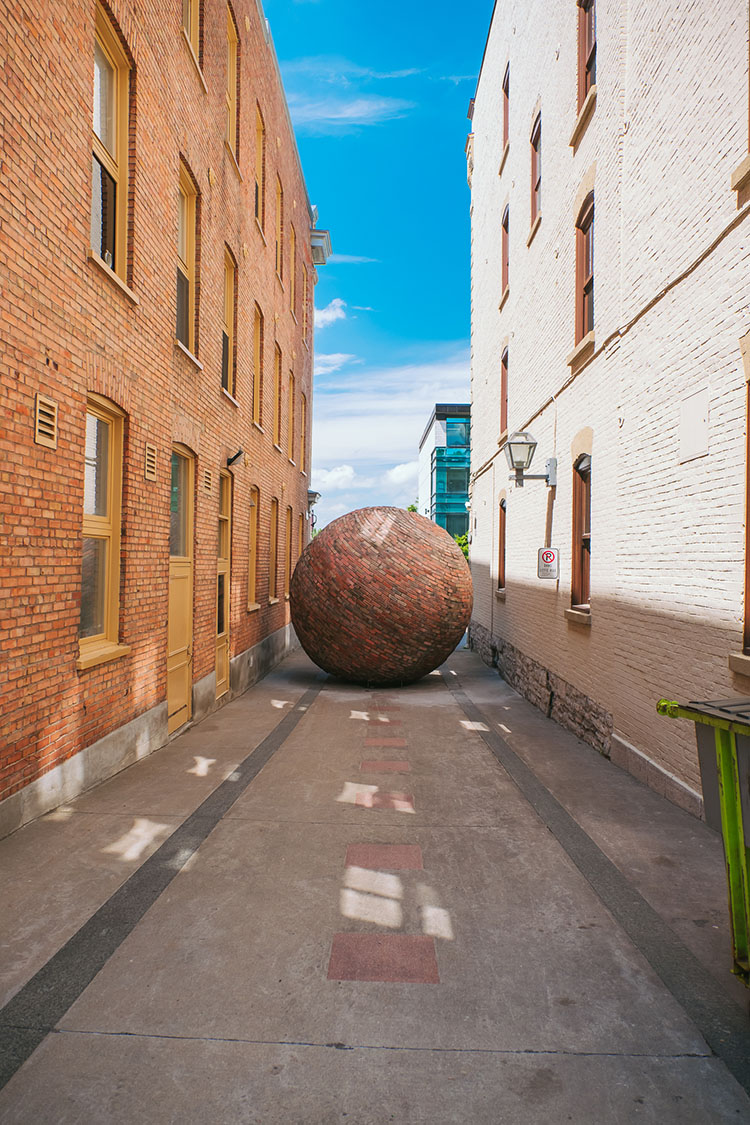 Is this giant sphere rolling down the alley, or purposely blocking it? Its shape confronts the straight vertical lines of the surrounding buildings, despite the illusion that all are made of the same material, brick. While the mosaic pattern recalls this favourite building material of the 19th and early 20th centuries, its shape clashes with the straightness of the buildings, adding a contemporary touch. Dare to approach and walk around the work: its relationship to the human scale just might give you vertigo.

Jeffrey Poirier’s art practice focuses on in situ installations that straddle the boundary between architecture, and sculpture. He creates objects inspired by the language of ornament, often playing with geometric and organic motifs to interrogate traditional, culturally determined ways of looking at our material heritage. 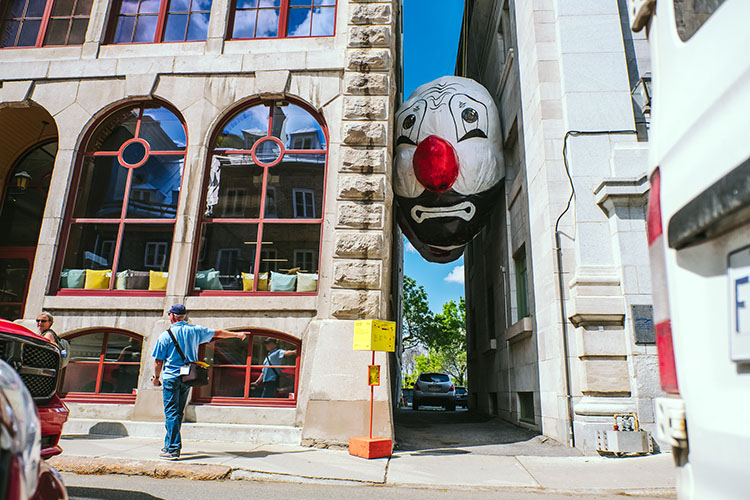 The scene seems absurd: two inflatable clown heads stuck between building walls. Compounding the strangeness, the figure of the clown—an object of mirth—takes a turn for the disturbing, depending on our point of view and our level of sensitivity. The title Endgame (Nagg & Nell) refers to the Beckett play in which two characters, Nagg and Nell, live out their days in a dumpster after losing their legs…

Max Streicher has been creating inflatable sculptures for thirty years, with a particular interest in the motion of human breathing through artificial wind tunnel systems. The choice of location for his installations creates tension between the occupied space and the sense of whimsy represented by the balloon. 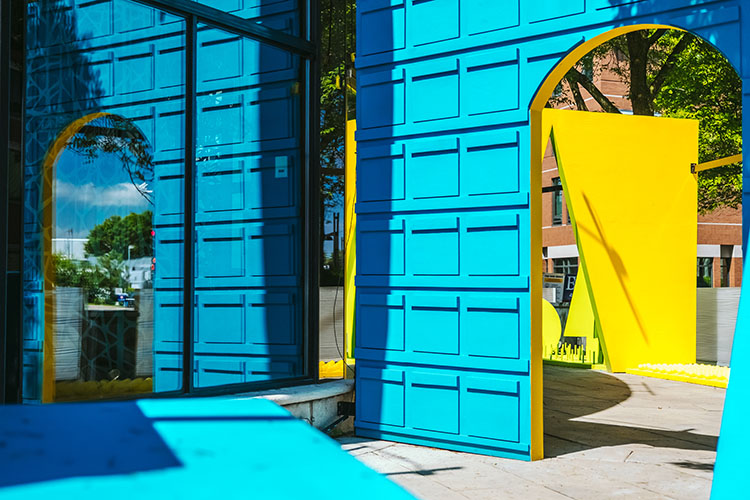 Walk through the portals to discover a colourful world concealing a critique of our relationship with nature: artificial vegetation, industrial agriculture, sanitized food, and a dehumanized restaurant industry. Put together, it portends an uncomfortable future distorted by human efforts to exercise extreme control over the environment. Is this the inevitable endpoint of efficiency, or a sign of impending disaster?

Passages Insolites is free of charge: the perfect invitation for people of all ages to let the city be their guide as they discover unique, fun and thought-provoking artworks at their own pace and embrace the unexpected.