Until February 2020, Pirelli HangarBicocca in Milan will host “….the Illuminating Gas”, the largest-ever solo exhibition of Cerith Wyn Evans — conceived as a harmonious composition in which light, energy, and sound offer visitors a unique synesthetic experience. Twenty-four works, ranging from earlier pieces to new creations, are installed in the exhibition spaces of Pirelli HangarBicocca as elements in an elaborate visual score.

Wyn Evans’s research focuses on language and perception, and is characterized by the use of ephemeral elements such as light and sound, the use of montage as a compositional technique, and the imaginative potential of the word, as well as the centrality of the temporal and durational dimension in the experience of a work. 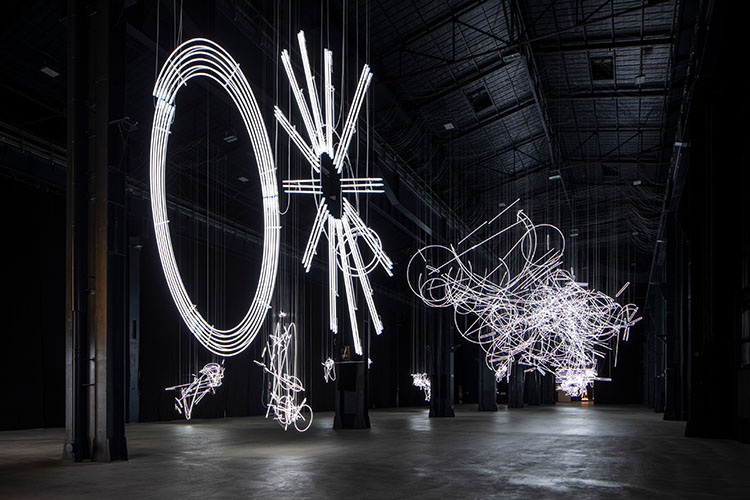 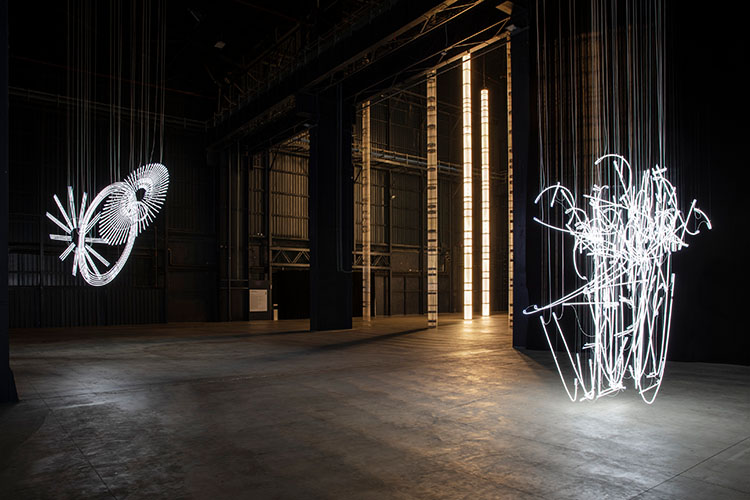 Made specifically for the occasion, and consisting of a skeleton of tubular lamps assembled from cylinders of various heights, the work creates a choreography of lights and shadows that intermittently invades the space. This energy release provides a counterpoint to the sound emitted by the adjacent work, Composition for 37 flutes (2018), an ethereal glass sculpture also composed of transparent elements. The air from its thin reeds produces a hiss that suggests a state of tension between the harmony of a breath and its dissipation. 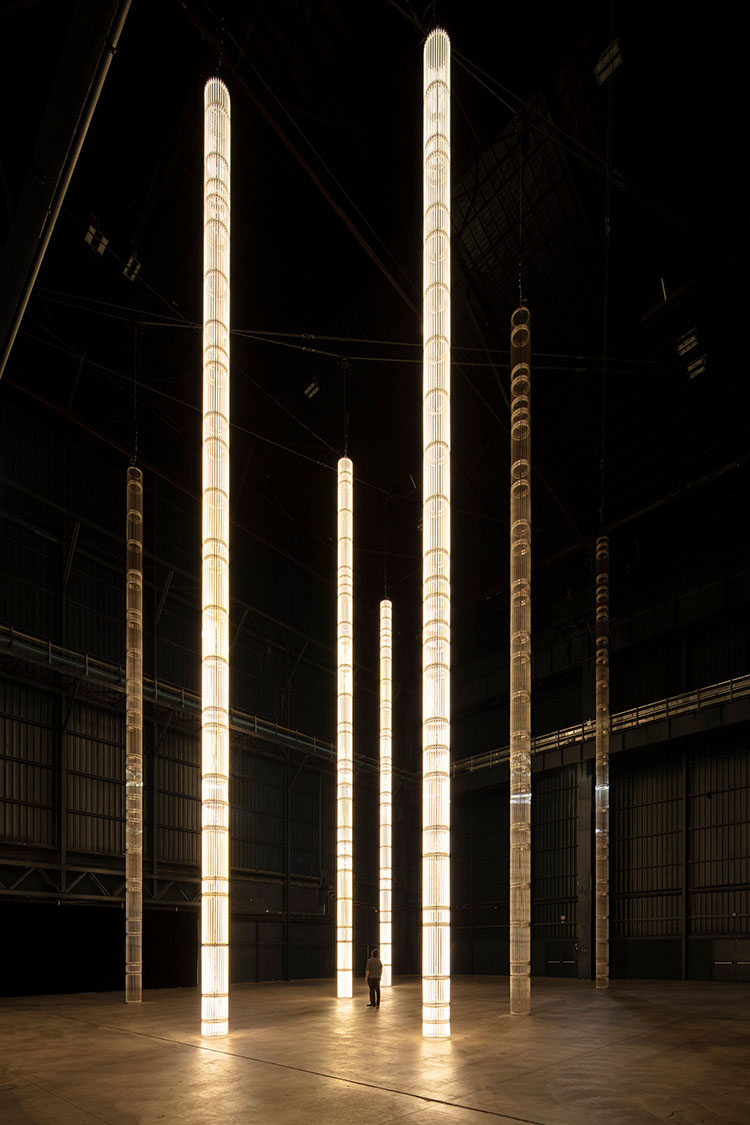 All of the elements along the Navate are suspended and form an elaborate visual score conceived by the artist. As if in a concert, the 13 neon sculptures of the series Neon Forms (after Noh) (2015-2019) engage in a dialogue with the mile-long tangle of lines and luminous curves of Forms in Space… by Light (in Time) (2017), a work originally conceived for the Duveen Galleries of the Tate Britain in London and presented in Milan in a new configuration. For the Neon Forms (after Noh) series, the artist draws on the repertoire of steps, head and kimono movements or fan gestures performed by Noh theatre actors, as summarized and represented in the charts describing how a certain role is staged. 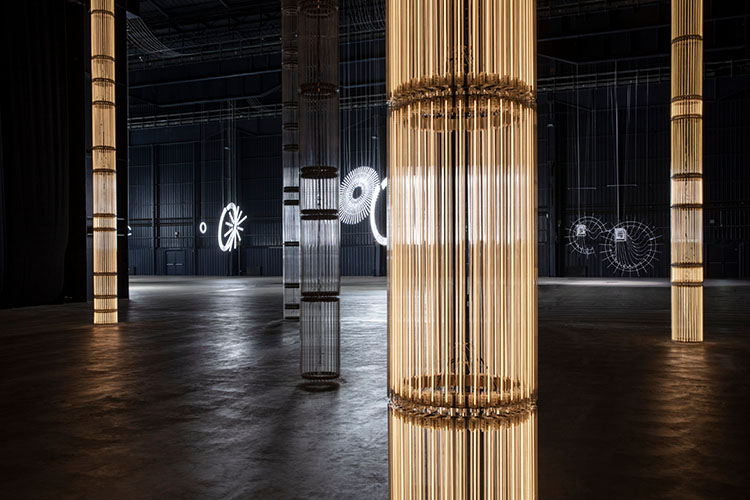 Cerith Wyn Evans presents them in a new guise through a complex montage that reverses, twists, mirrors, dilates, extends and overlaps. Forms in Space… by Light (in Time) also incorporates forms used by Marcel Duchamp in The Bride Stripped Bare by Her Bachelors, Even, also known as The Large Glass (1915–1923) particularly that of Oculist Witnesses, a diagram of the optical device used to measure sight and transforms them into light. 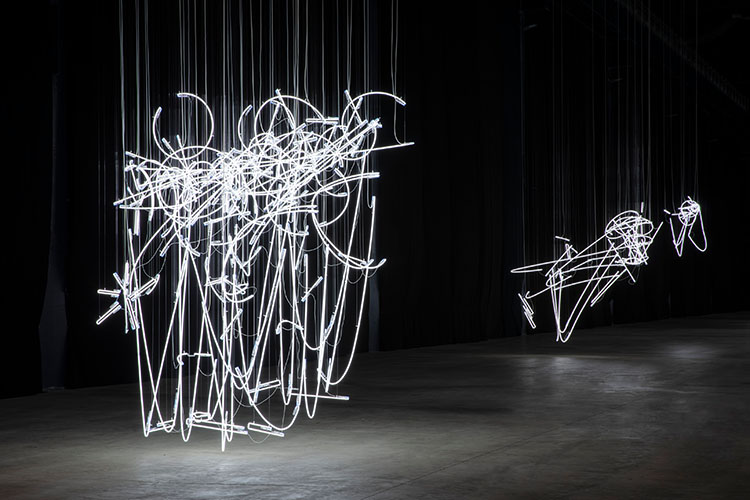 The very title of the exhibition “….the Illuminating Gas” refers to Duchamp’s final work, Étant donnés: 1. La chute d’eau, 2. Le gaz d’éclairage [Given: 1. The Waterfall, 2. The Illuminating Gas], a piece that the French artist worked on for 20 years between 1946 and 1966. It represents an enigmatic diorama visible only through the hole at the center of a door. 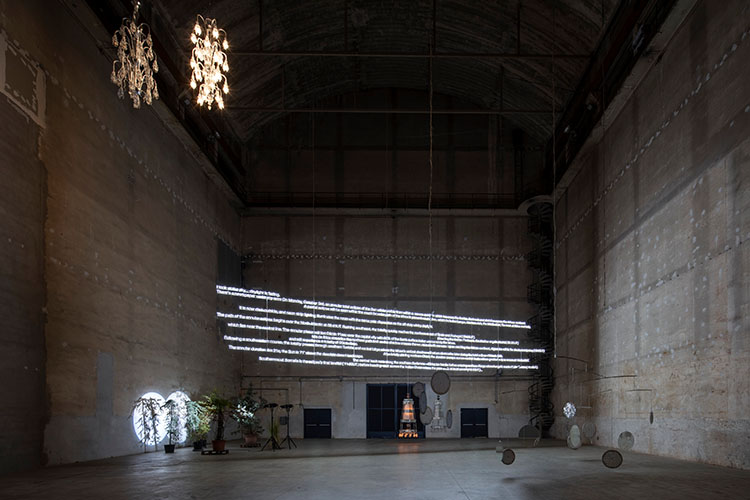 A mixed selection of displays is presented in the Cubo, the only space with natural lighting, including ethereal neon signs, suspended mobiles and sound installations arranged in a harmonious balance. Visitors are greeted by two installations conceived as a personal and subjective sensory experience: E=C=L=I=P=S=E (2015), a monumental neon sign describing the temporal and geographical progression of a solar eclipse across different continents, and C=O=N=S=T=E=L=L=A=T=I=O=N (I call your image to mind) (2010), a suspended mobile composed of reflective disks and directional speakers that form a polyphonic collage composed by the artist from various sources, including his own arrangements on the piano and recordings by a radio telescope in an astronomical observatory. 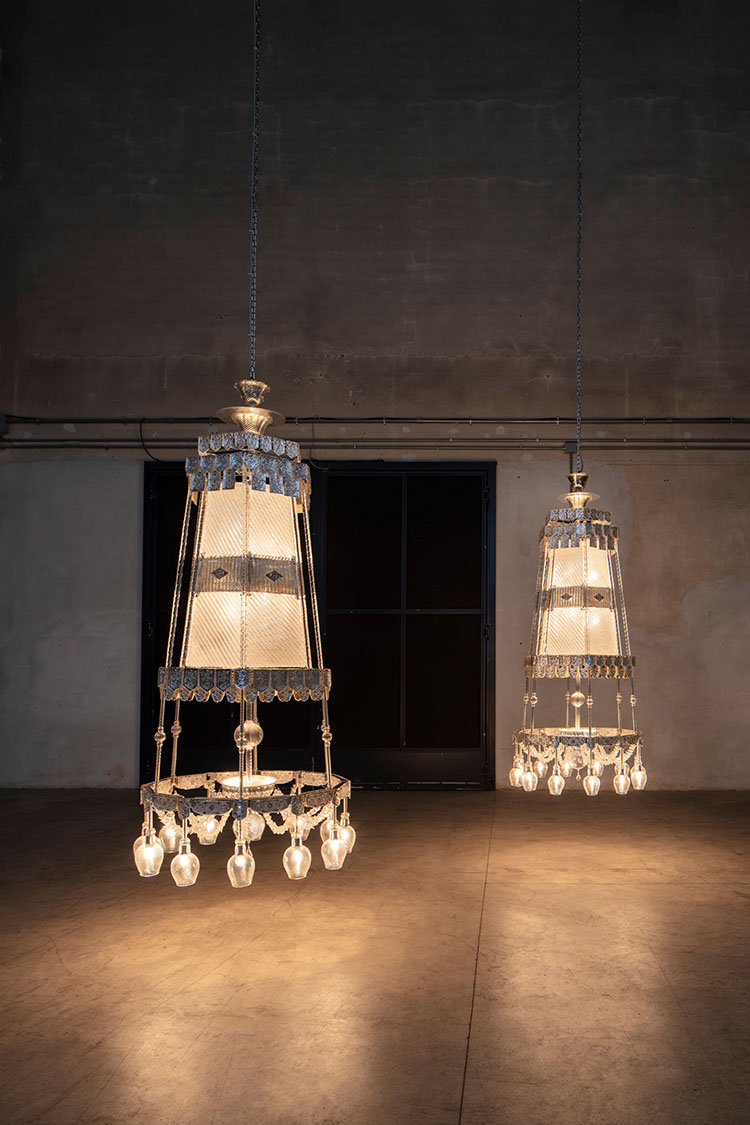 Further along in the space, S=U=T=R=A (2017) and Mantra (2017) appear as two pairs of Murano blown-glass chandeliers that emit flashing lights according to a composition written and performed by Cerith Wyn Evans himself. Light and movement return in Still life (In course of arrangement…) V (2015), an installation that refers to the dawn of cinema. 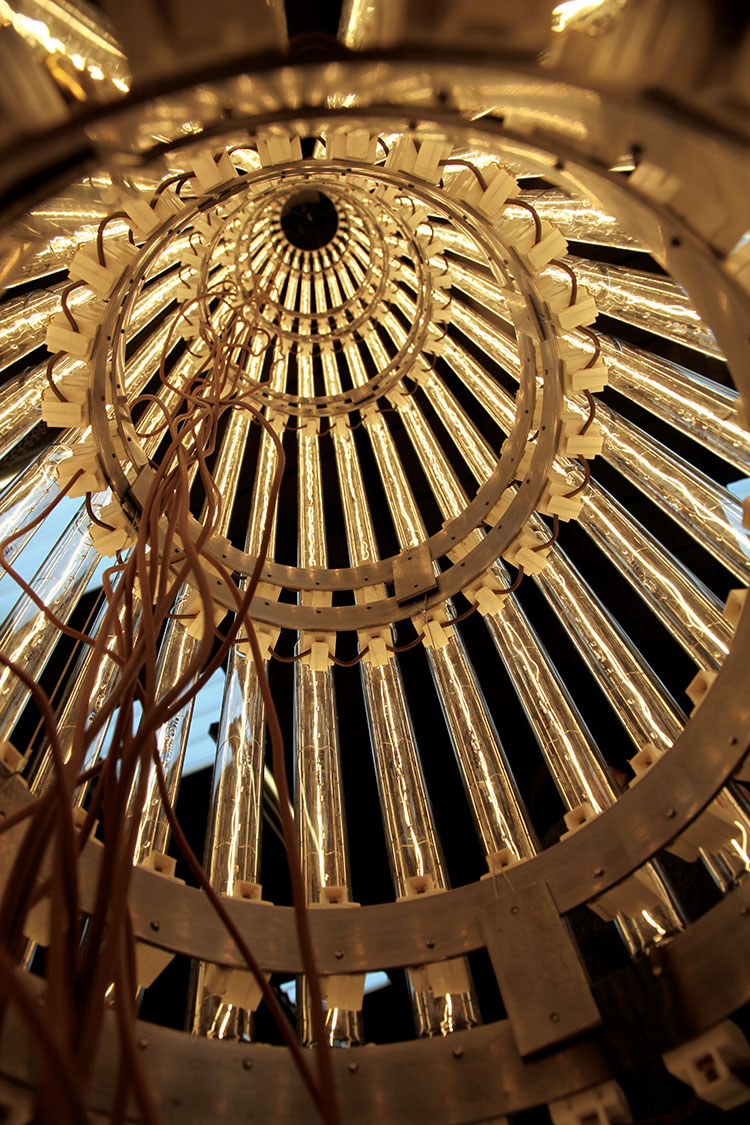 Finally, T=R=A=N=S=F=E=R=E=N=C=E (Frequency shifting paradigms in streaming audio) (2015), conceived as an immaterial column composed exclusively of audio coming from a directional speaker placed on the floor, serves as a counterpoint to the seven light columns that open the exhibition. The show design also incorporates the external architecture of Pirelli HangarBicocca by presenting TIX3 (1994), the artist’s first neon work—consisting of the word ‘exit’ spelled back to front.