Danish-Icelandic artist Olafur Eliasson has unveiled his latest permanent public artwork ‘Our Glacial Perspectives’ along South Tyrol’s Hochjochferner glacier. The artwork begins with a path leading along the mountain’s glacial-carved ridge for 410 metres. This path is divided by nine gates that are spaced at intervals corresponding in scale to the durations of Earth’s ice ages, marking thereby a deep-time timeline of our planet, of ice, and of the environment. 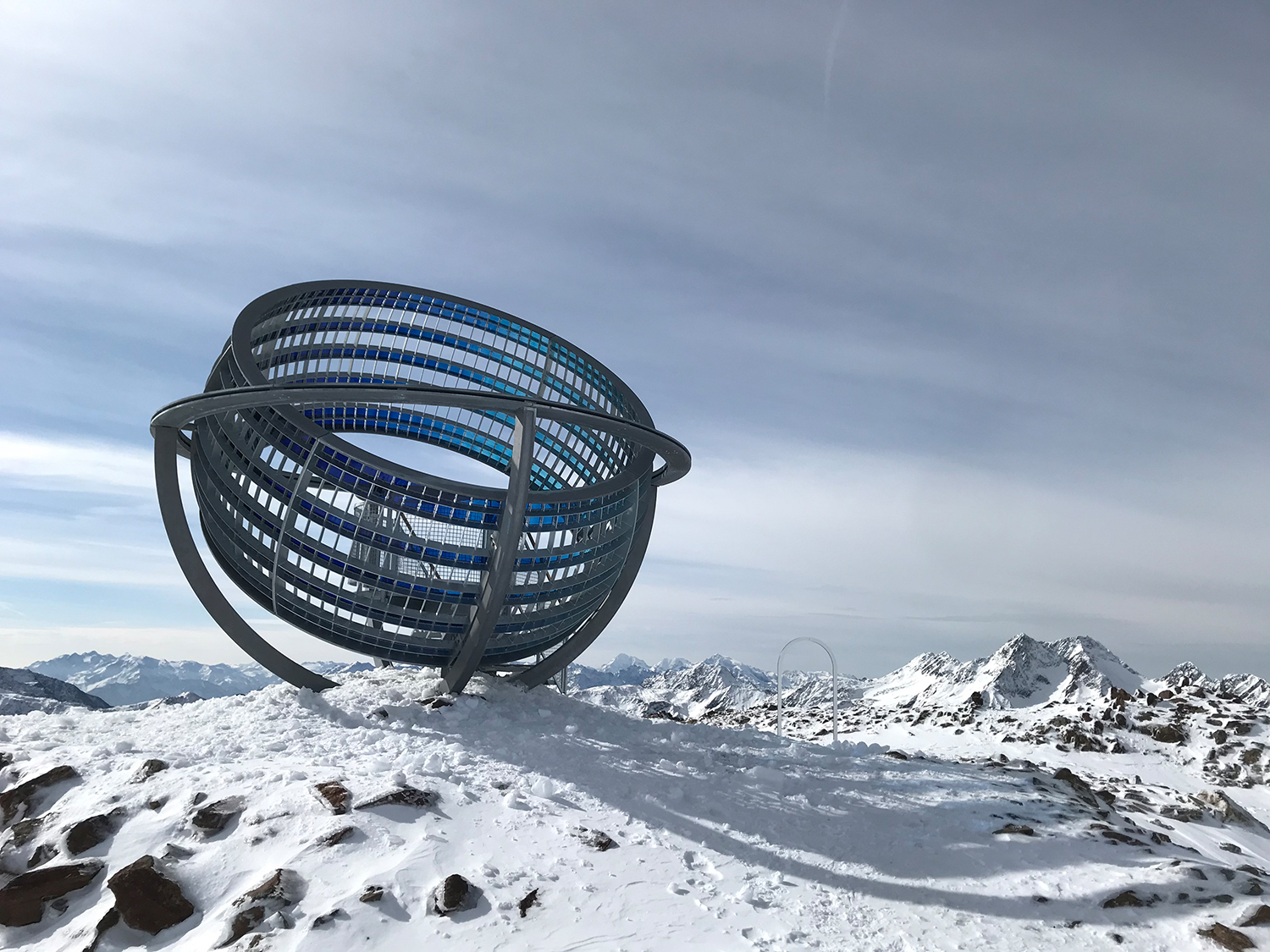 At the end of the path is a pavilion made from multiple steel and glass rings that contain a circular deck jutting out over the edge of Mount Grawand. Standing on the deck, the viewer can use the pavilion as an astronomical instrument by aligning her gaze with the surrounding rings, which track the apparent path of the sun in the sky on any given day. The rings divide the year into equal time intervals: the top ring tracks the path of the sun on the summer solstice; the middle ring tracks the equinox; and the bottom, the winter solstice. 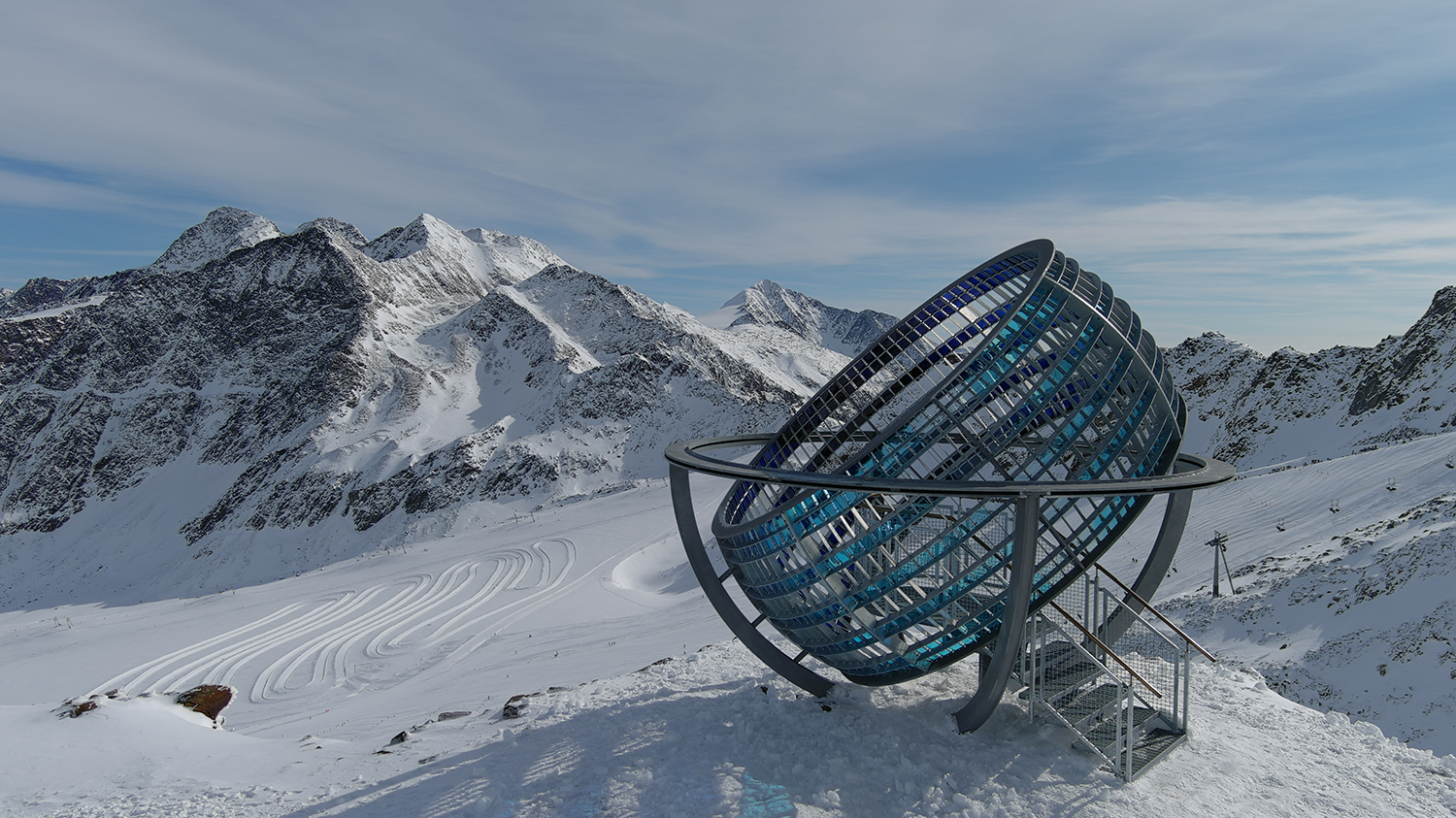 Each ring is itself split into rectangular glass panes that cover 15 arc minutes of the sun’s movement across the sky, making it possible for the viewer to determine the time of day based on the position of the sun. On the outside of the pavilion, two parallel steel rings frame the horizon line, and the half-rings that support the structure indicate the north–south and east–west axes. 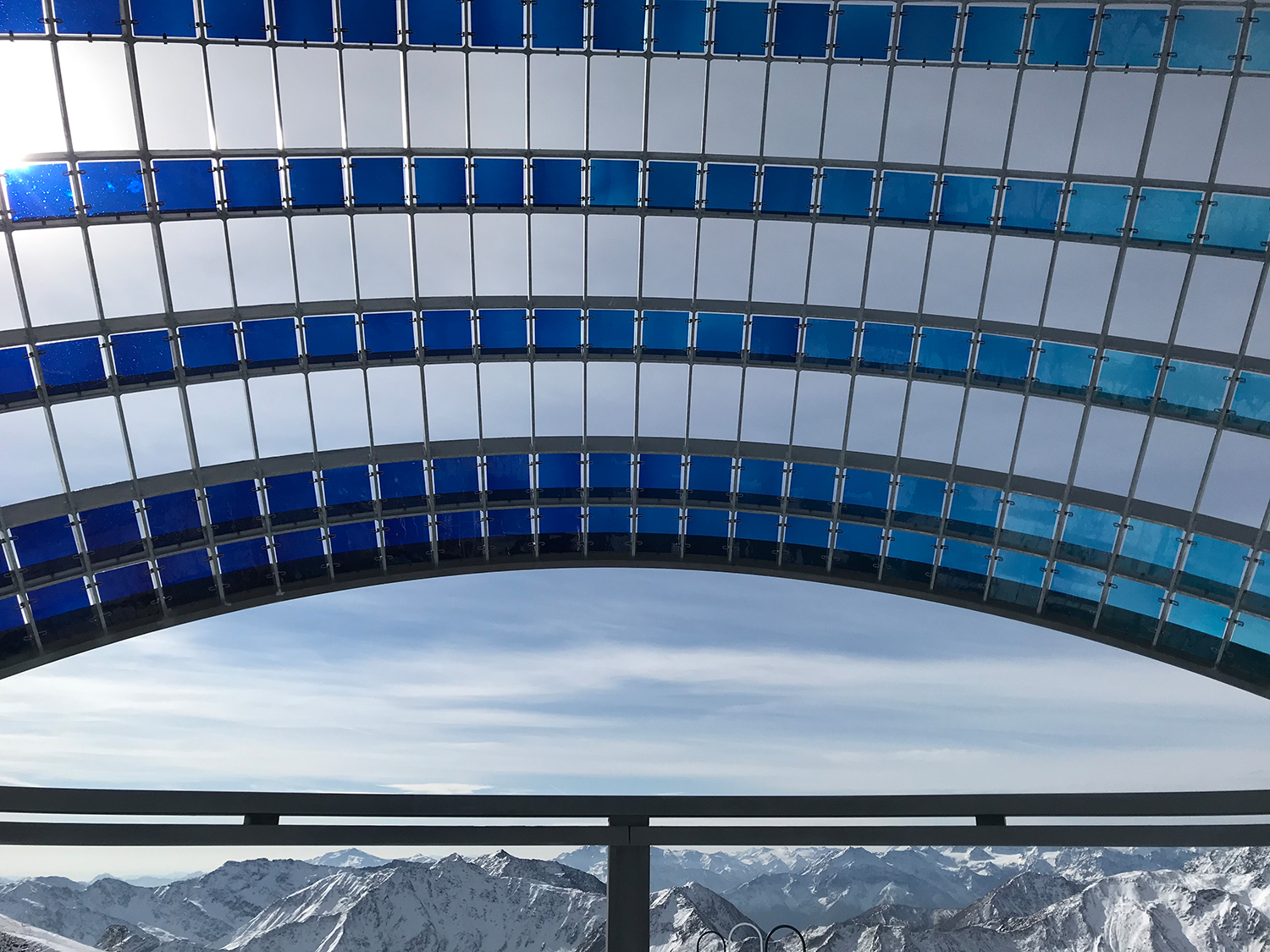 By marking the horizon, the cardinal directions, and the movement of the sun, the artwork directs the visitor’s attention to a larger planetary perspective on the changes in climate that are directly affecting Hochjochferner. The glass panes of the sun-path are tinted various shades of blue in reference to the cyanometer, a scale developed in the nineteenth century for measuring the blueness of the sky. The coloured glass filters and reflects light and solar radiation, behaving as a mini-atmosphere. 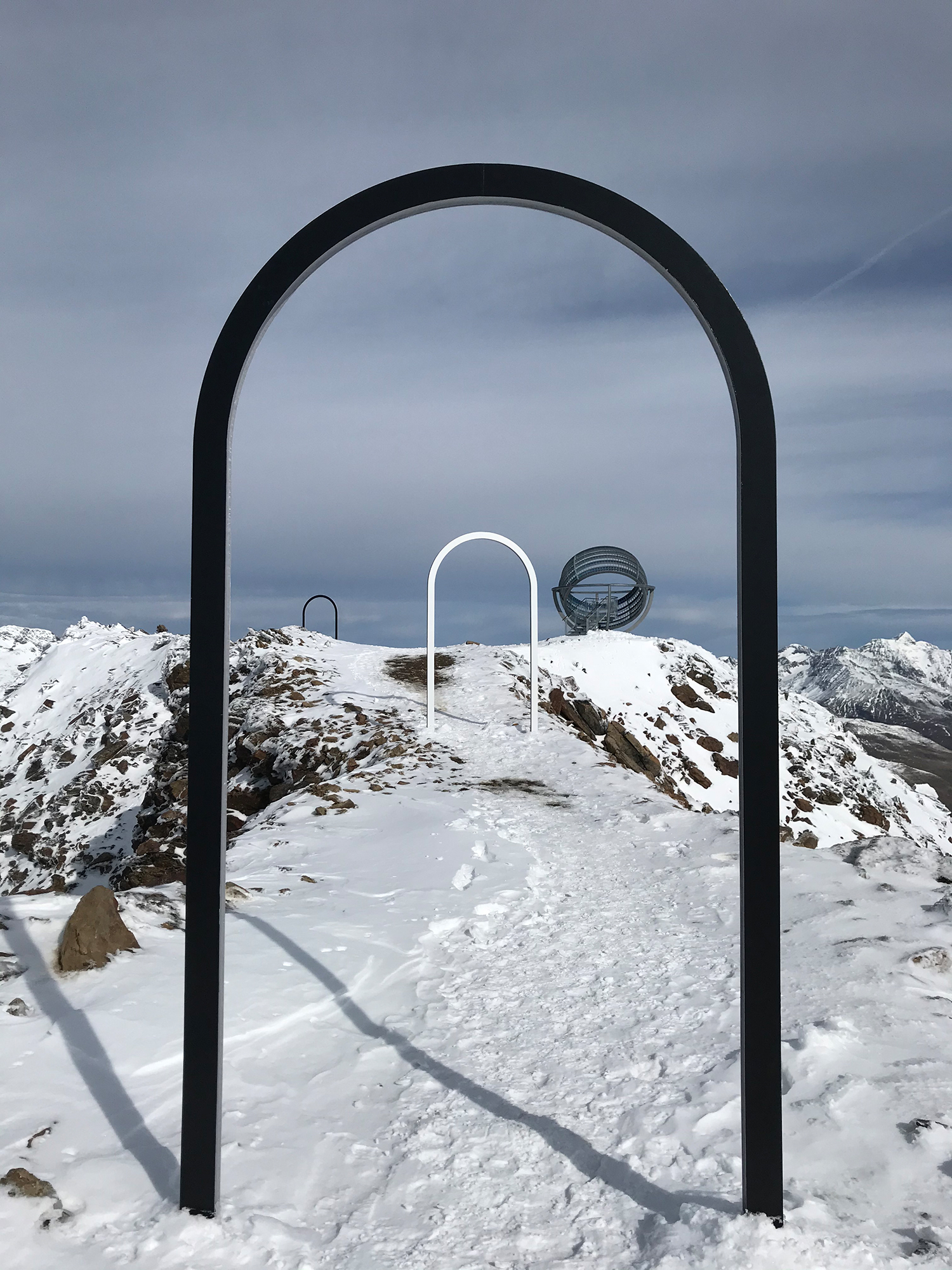 The artwork was commissioned by the ‘TalkingWater’ Foundation, a platform for reflection and exchange on water, our most powerful and precious resource, founded by Ui Phoenix von Kerbl and Horst M. Rechelbacher (1941–2014 – Founder of AVEDA in USA). The location of the artwork is home to the headquarters of the foundation: “This is a place of strength. Here, water flows from a multitude of Artesian springs, forming an allegory for life at these heights: as deep as the rock may be, water always finds its way to the light,” says Ui Kerbl. “After emerging here from the underground source, the water is divided by a watershed into two streams, one of which flows to the Mediterranean and the other, via the Inn and the Danube, to the Black Sea, to ultimately unite in the Atlantic Ocean.” 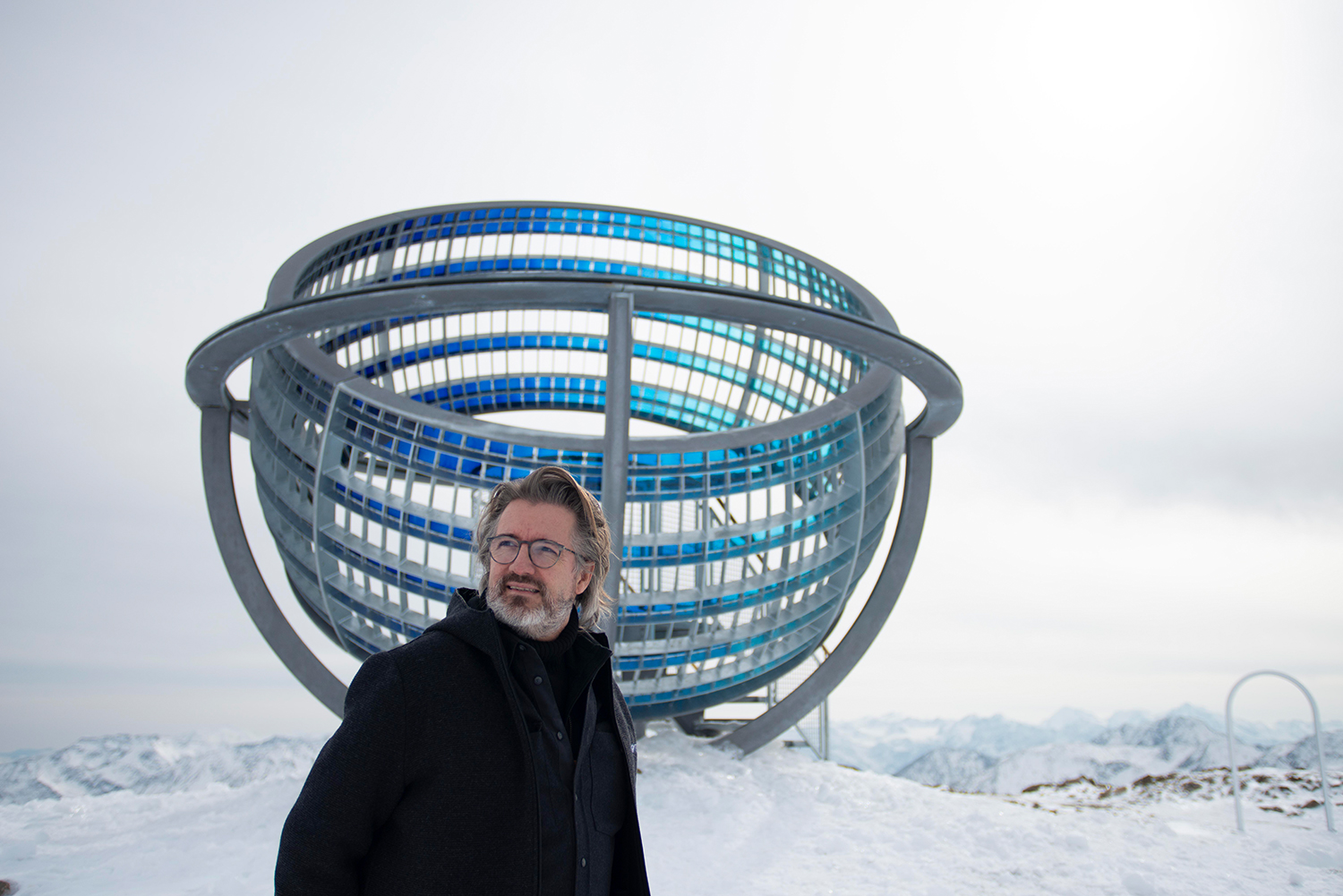 “I was introduced to Olafur Eliasson by the Norwegian artist and scientist Sissel Tolaas, and our philosophies matched. We both believe in the power of art to create awareness through emotional, sensory, and physical experience,” says Ui Kerbl.

The Danish-Icelandic artist was also enthusiastic about Ui Kerbl’s idea of bringing art to this powerful site, the Hochjochferner glacier. “I am very excited to have had the opportunity to create Our glacial perspectives especially for Mount Grawand and the Hochjochferner glacier,” says Eliasson. “The artwork acts as a magnifier for the very particular experience of time and space that this location affords – vast and boundless on the one hand, local and specific on the other. It is an optical device that invites us to engage, from our embodied position, with planetary and glacial perspectives.”