In the heart of Val di Sella, Borgo Valsugana, Italy, in an open-air setting of contemporary art, Stefano Boeri designs for Arte Sella Tree-Room, a circular wooden installation in which humans and living nature come together, between meditation and contemplation.

“A room inhabited by three trees,” says Stefano Boeri. “You can enter – and feel the difference between them and us: that of their lives and their time, intelligence and perceptions, movement and stability. Or, on the other hand, once you sit in front of them, you can grasp the affinities between us and them: biological, organic affinities of vital species that manifest themselves in the absolute individuality of each subject, of each specimen. The room is just an opportunity for confrontation; for us – and perhaps for them too.” 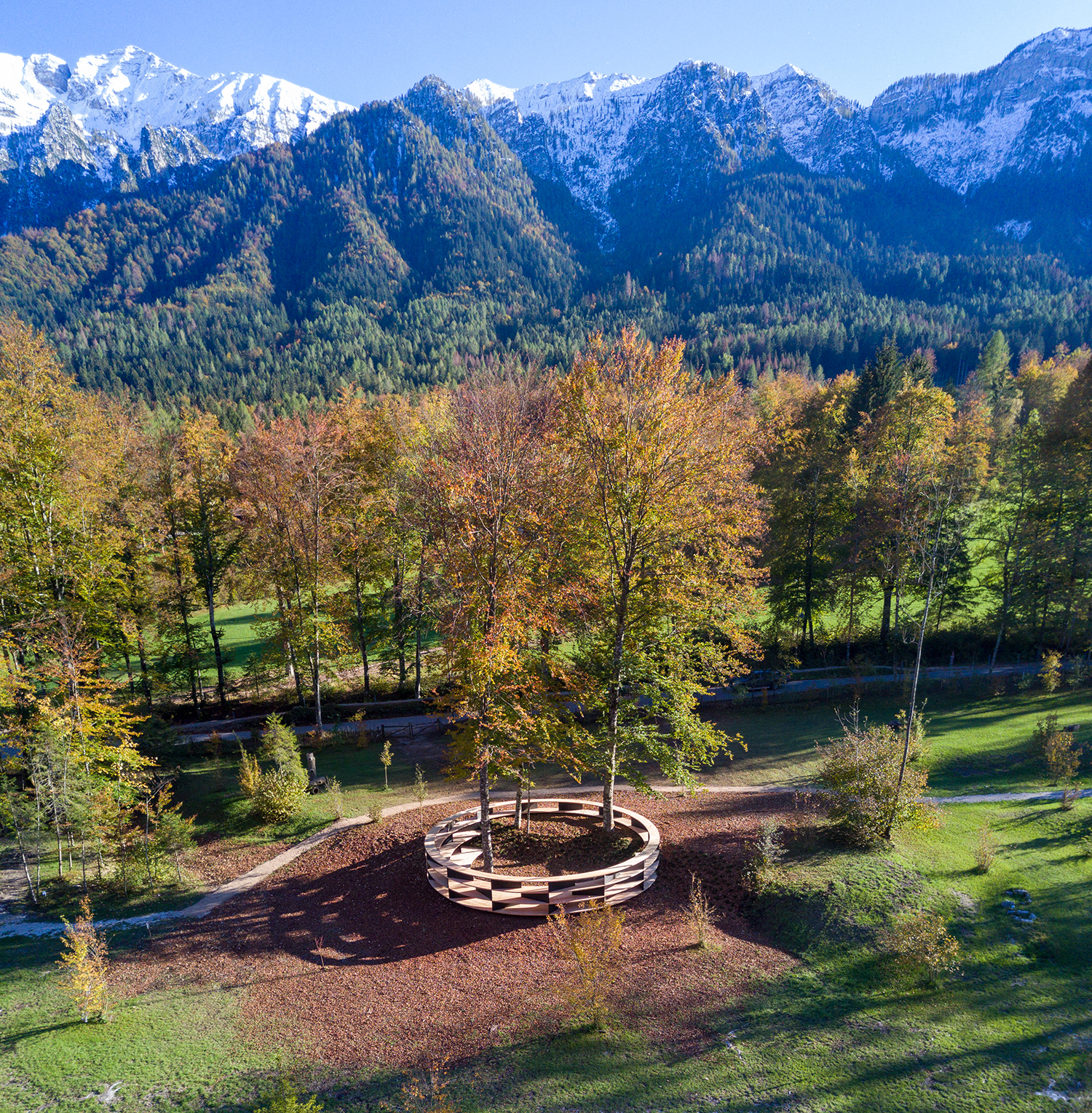 Since more than thirty-five years Arte Sella represents the place where art, music, dance and other expressions of human creativity merge, creating a unique dialogue between the natural world and human talent. In the furrow of this story, in 2017 a dialogue between Arte Sella and the world of Architecture and Design was born; it is now a consolidated project, which has seen the participation of international protagonists such as Michele De Lucchi, Kengo Kuma, Eduardo Souto De Moura and Ian Ritchie. The scientific advice in the choice of the authors and the technical supervision of the experimental projects and installations were entrusted to Marco Imperadori, Professor of Design and Technological Innovation at Politecnico di Milano. 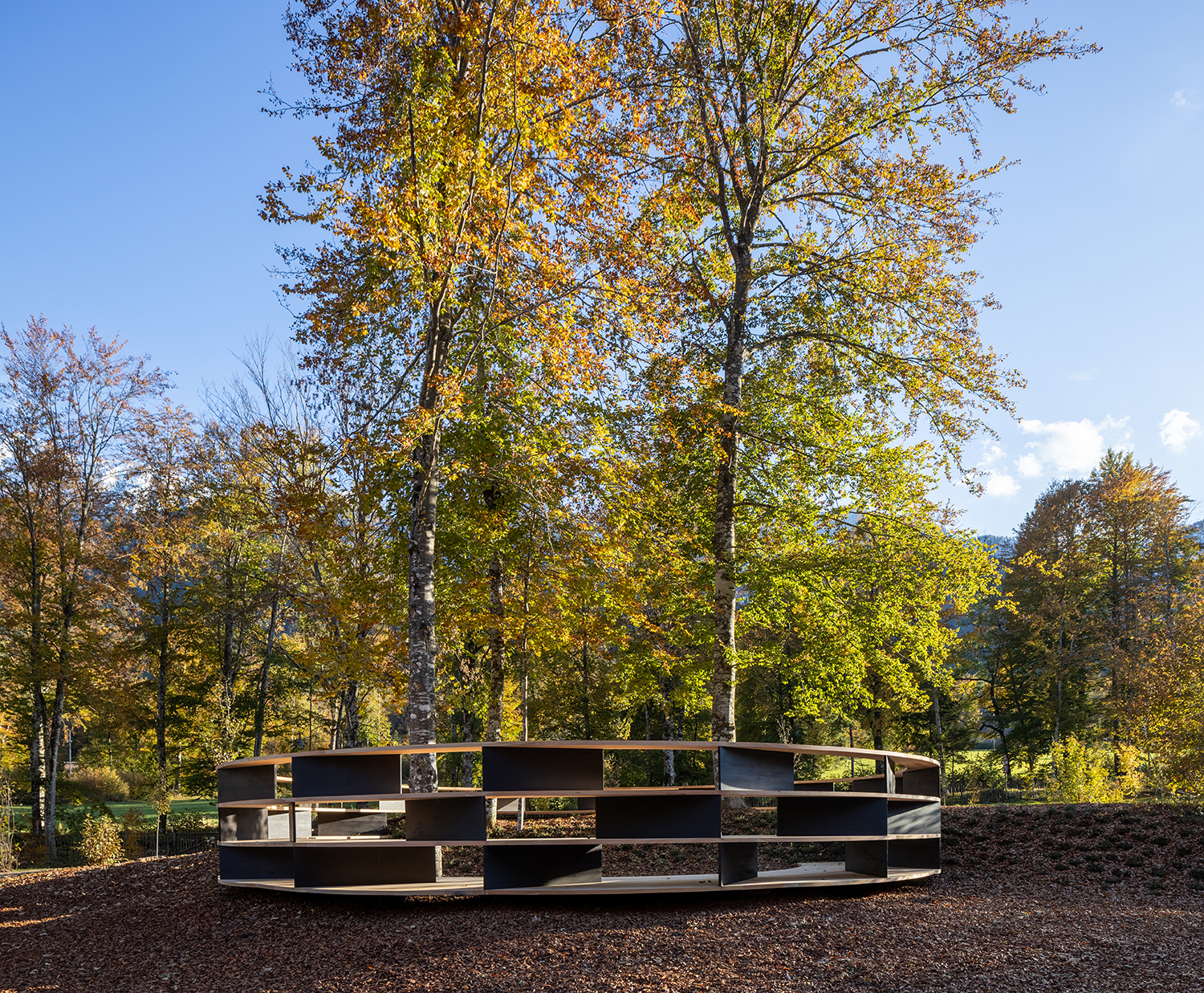 Tree-Room is designed in this context to blend into the environment in which it stands, adapting spontaneously to the existing ground level: the circular structure of 12 meters in diameter, in fact, embraces on the inside three trees that become the symbol of the forests that was swept away by the Vaia storm, on October 29th in 2018. 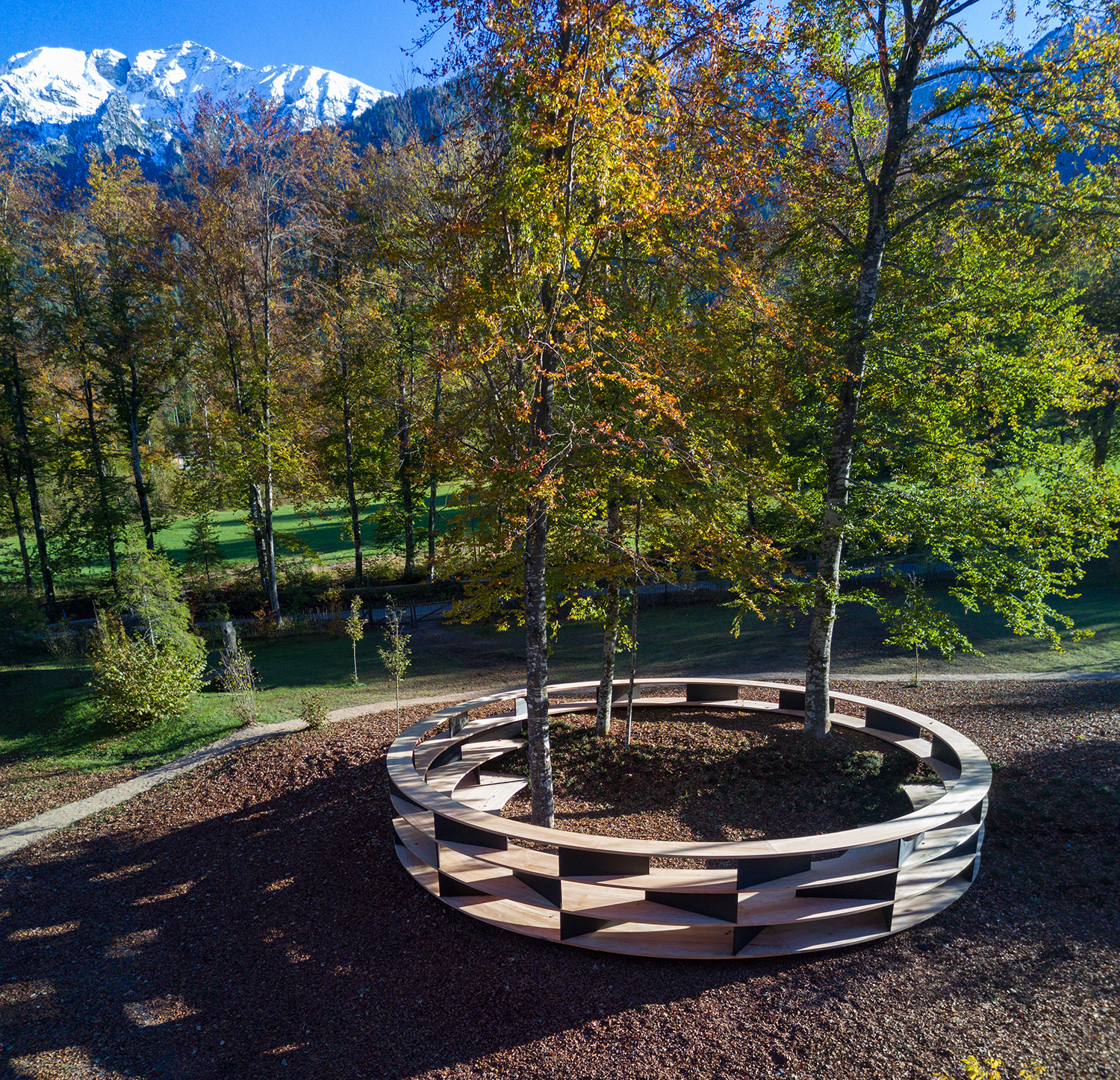 Tree-Room was born in an uncontaminated place surrounded by greenery and is conceived as an embrace with the surrounding landscape in a visually permeable and welcoming project. The materials chosen are strictly controlled (FSC and PFSC certified timber) and are alpine larch. The foundations are made of ribbed plates of corten steel, which seem to rise from the ground, supporting the circular discs in a natural pinkish larch, and are interspersed with vertical load-bearing baffles in treated natural larch. 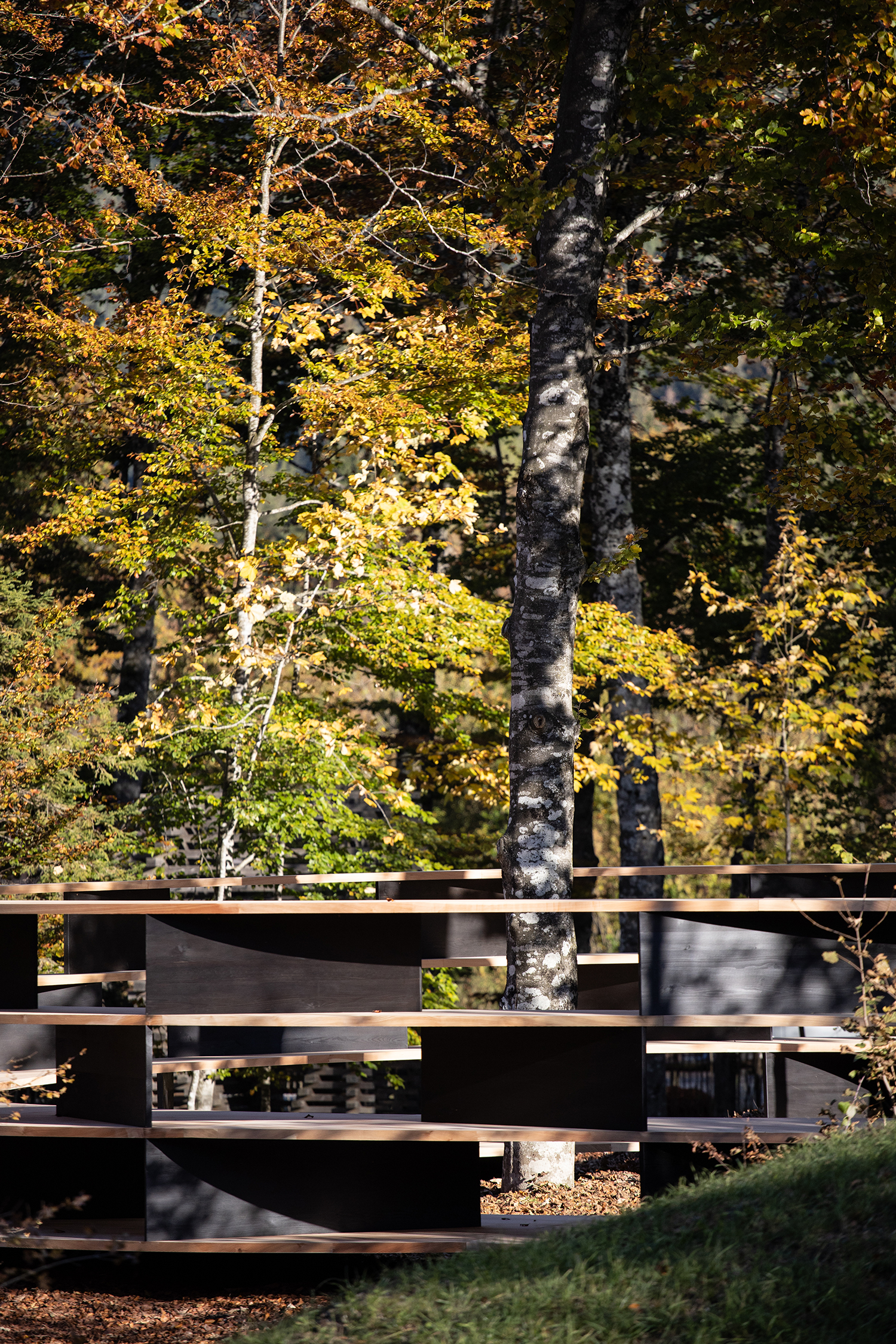 The installation, walkable on various levels and from which it is possible to admire the living nature and the surrounding works, becomes a private room for meditation and an open-air theater, in a game of lights and shadows, accentuated by the different colors of the wood given by the treatments chosen for the vertical septa: a sustainable, ecological and Km0 solution of iron oxide and apple vinegar, in fact, allows to blacken the alpine larch surfaces and to generate an optical depth effect that gives the whole work a strong dynamism. 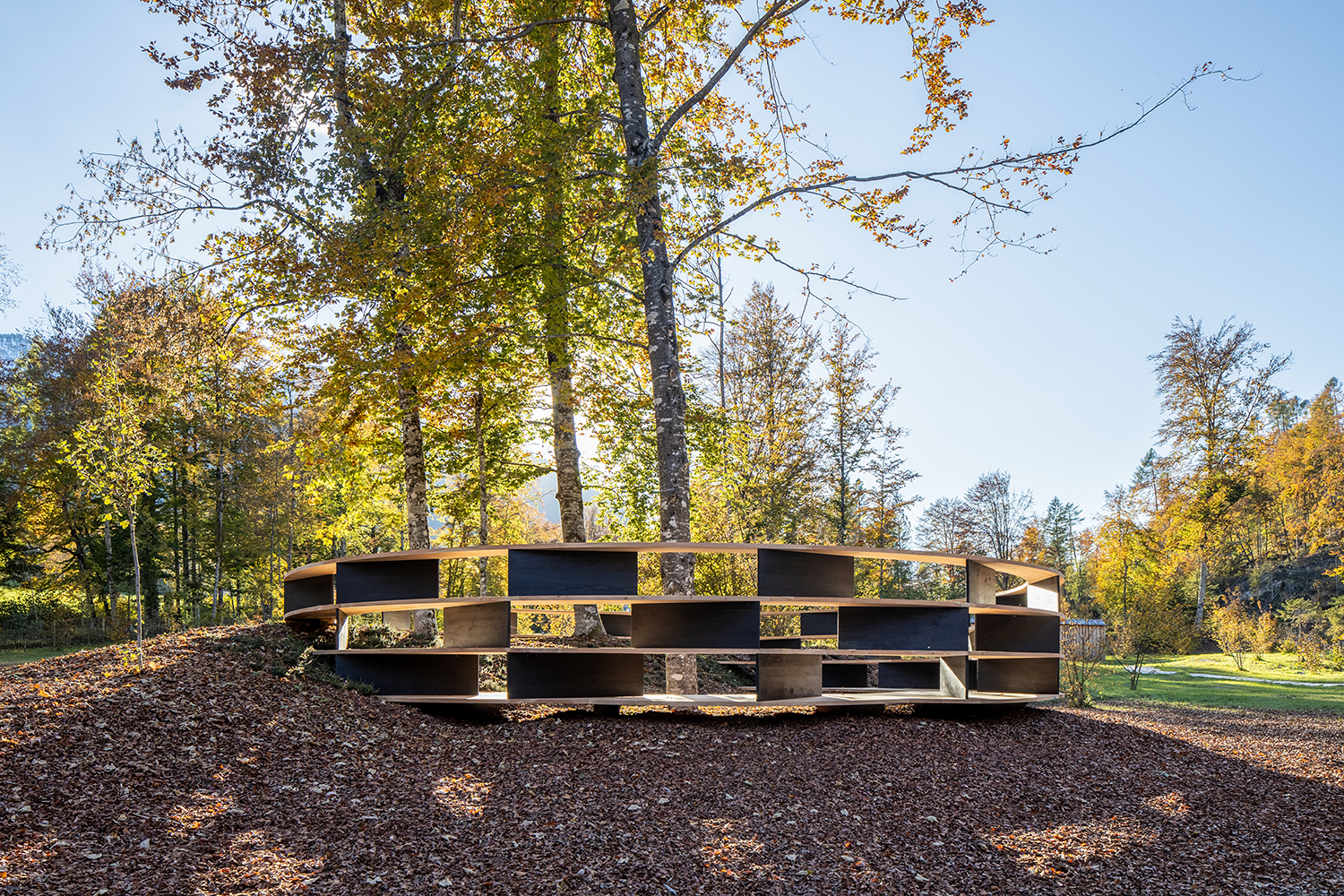 The treatment, which gives the vertical septa a black color, is known in ancient times and is called Iron Pyrate or Iron Pyrolignite; it is also known as rust bite and allows to extract the natural tannins of larch and to obtain both the desired color effect and an ulterior protection against aging.

Tree-Room, enhanced by the pedestrian path that winds through the Park of Villa Strobele, seems to hover from the ground evoking a cyclical typical image of Nature, in an installation dedicated to underline a new alliance between living nature and human being.