Studio Zhu Pei has recently completed the Imperial Kiln Museum in a historical area of Jingdezhen, known as the ‘porcelain capital’ of the world. The region, which had produced and exported pottery for more than 1,700 years, is now characterized by a fabric of ruinous ancient kiln complexes. The new museum comprises more than half a dozen brick vaults base on the traditional form of the kiln, each of the vaults is of a different size, curvature, and length. They were naturally applied to the site, carefully integrated with many existing ruins including a few ruins that were found after the construction. 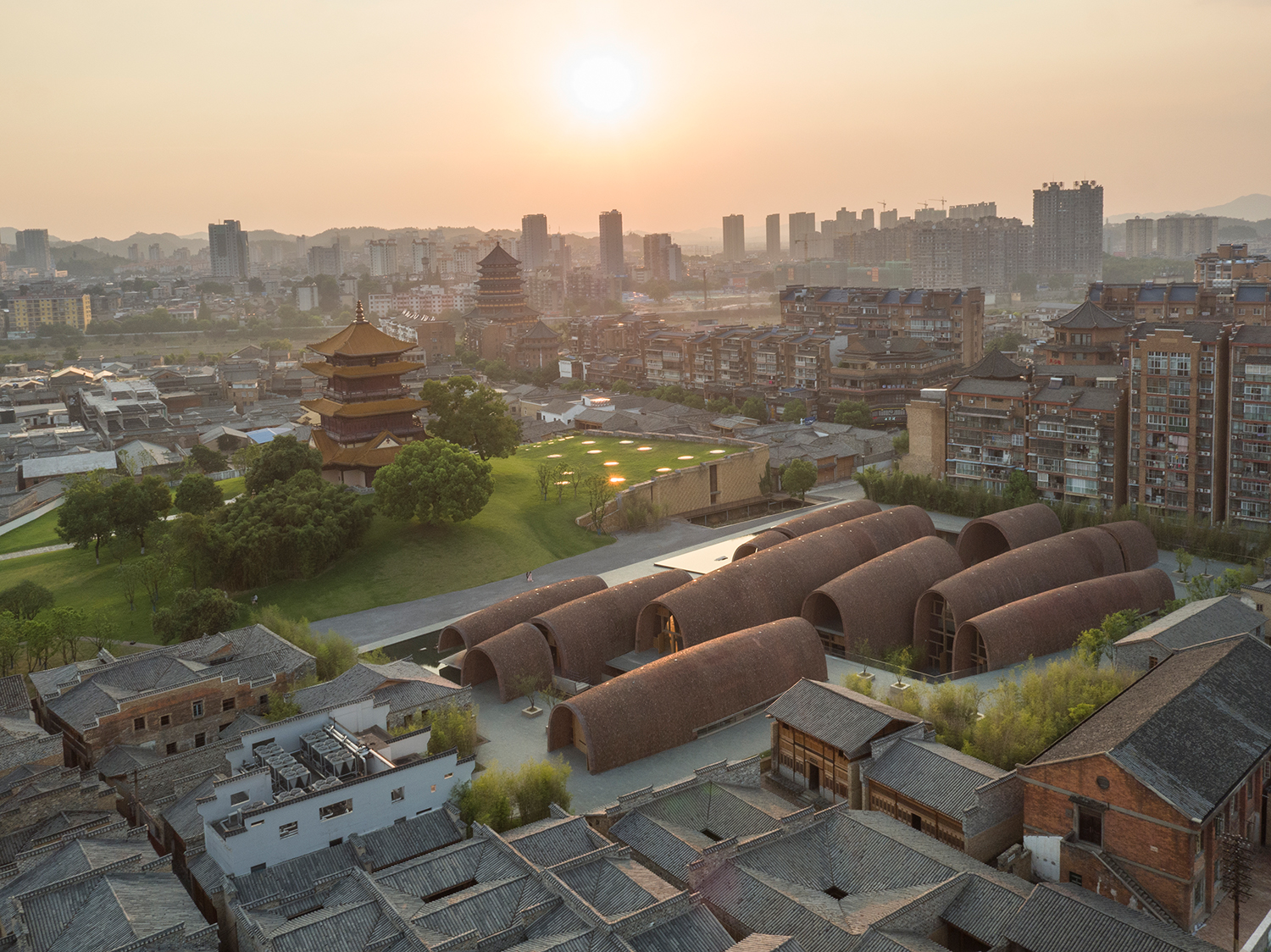 The unparalleled, liner, and arched structures of the museum, like old kilns, reach below the level of the street to not only give the flexibility to adapt itself into the complicated site, but also to achieve the intimate scale of interior space. This strategy – in part also as a response to the height of surrounding historical buildings – leads to productive ambiguity in relation to the building’s horizontal datum. The “insertion” of the building into the ground of the site produces a series of public spaces at street level. More importantly, it allows for the design of a number of more intimate open vaults, and courtyards within the museum. Most of those public spaces are covered under shaded and are protected from the rain because it is hot and it rains a lot during summer in Jingdezhen. One of those open spaces, two open vaults sited in both ends, will also reveal the traces of the historic fabric on the site. 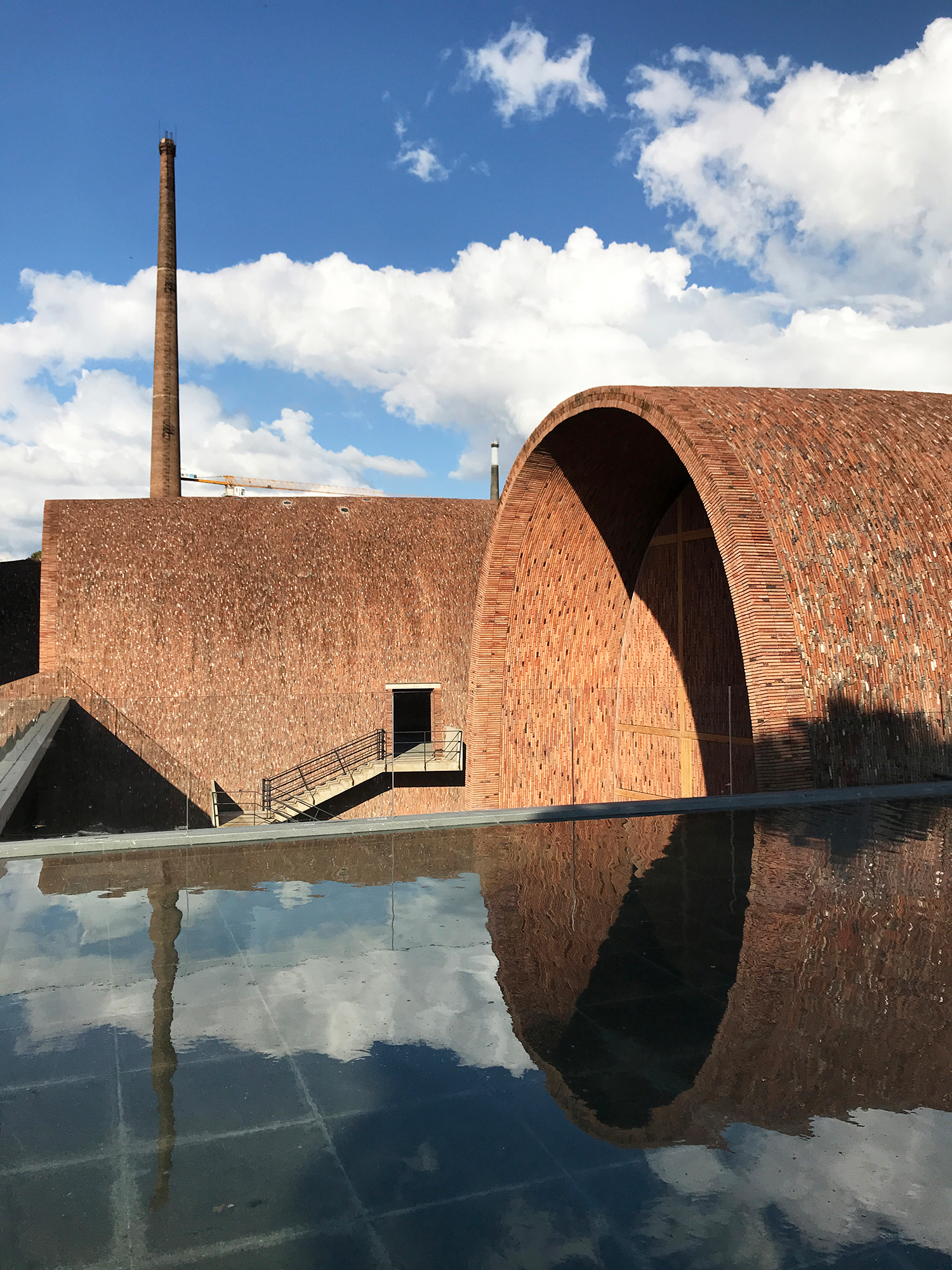 When one walks on the bridge, enters the foyer, and turns left, he will pass a series of arched exhibition spaces lightly varied in size and with contradicting openness (enclosed or open to the sky) to encounter a gentle stair, in the end, flowing down to the underground level with five sunken courtyards. Meanwhile, people can obtain a three-in-one (kilns-porcelains-people) museum experience when they see those porcelain, ruins, and sunken courtyards which create manifold layers’ experiences with ancient bricks on the façade. 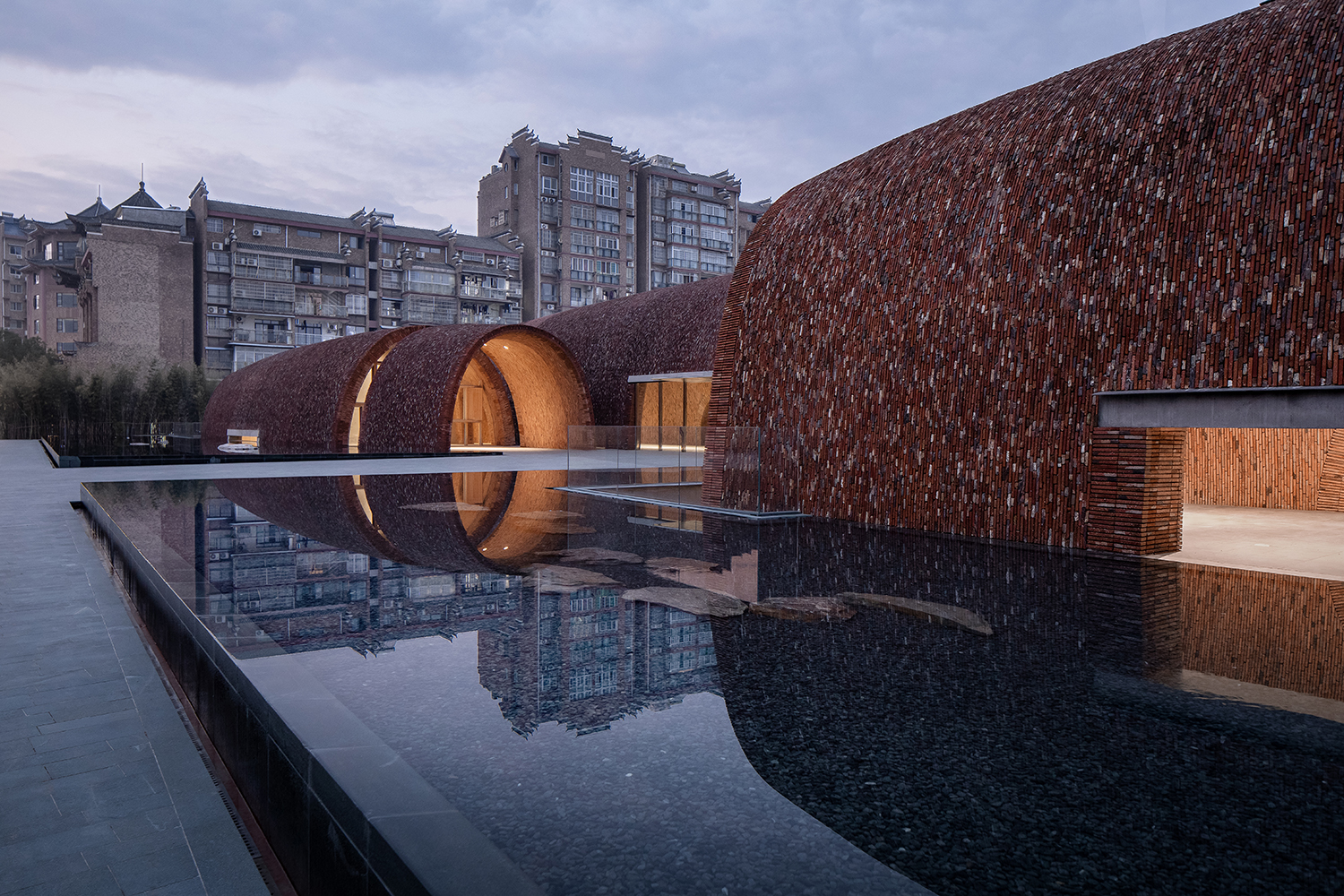 As someone turns right at the foyer, he will respectively pass the bookstore, cafe, tea room, and finally reach a semi-outdoor area under the arch, witnessing a picturesque scene. When daytime surfaces, these arches reflect the waves of water while low horizontal gaps tempt people to sit down on the floor to see the long horizon of the Imperial kiln ruins. A similar surprise would be created when someone sees the Longzhu Pavilion of the Imperial kiln ruins through the vertical seams when he is on the way to the auditorium before accessing the foyer.

Five sunken courtyards varied in size have a different theme: gold, wood, water, fire, soil. Those five themes not only reflect old Chinese thinking about the earth but also associate with porcelain making techniques. The overall experience of the museum tries to rediscover the roots of Jingdezhen, to recreate the past experience among kiln, porcelain, and human being. 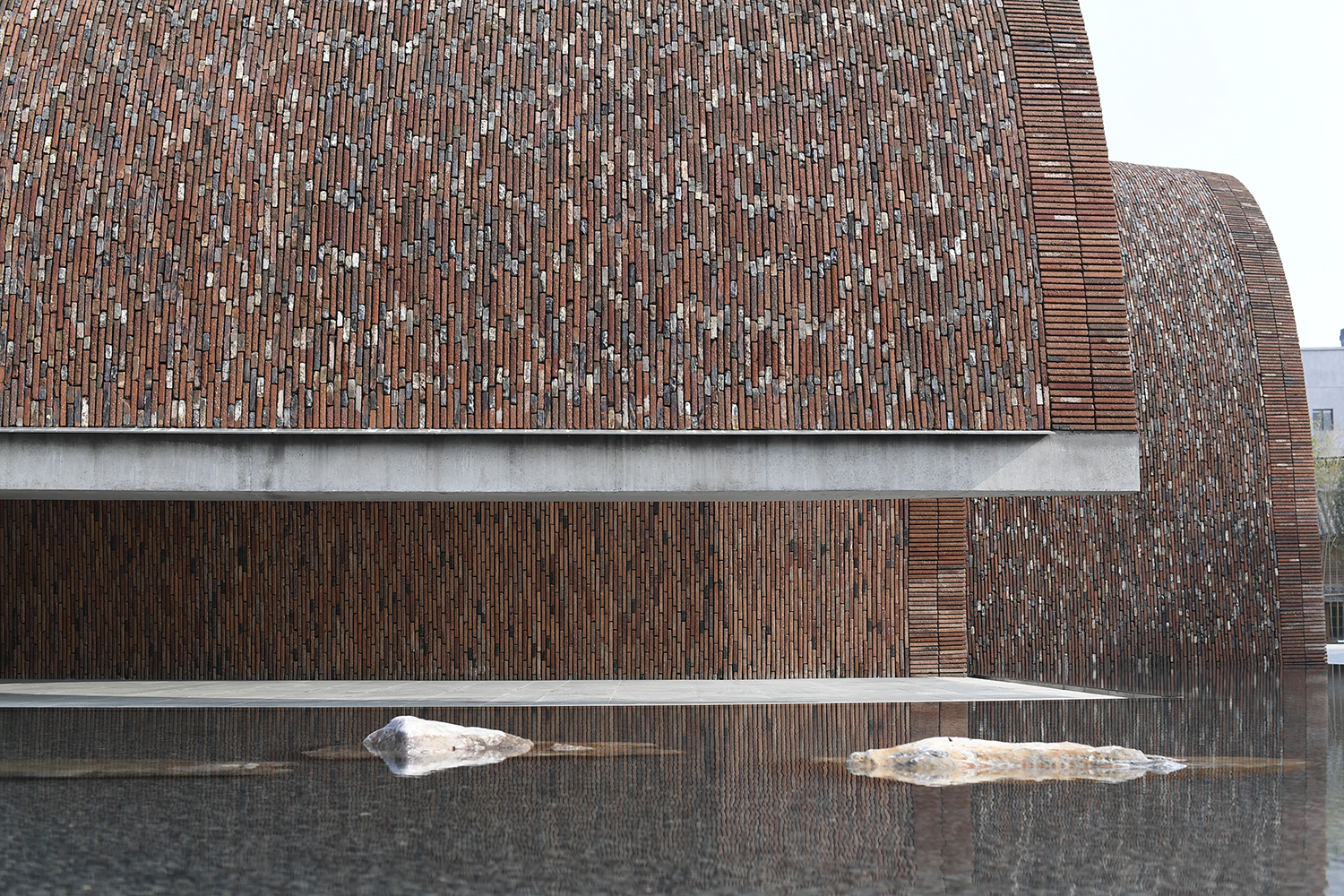 The architect was fascinated by local ancient kiln tectonic and material. Looking in the past, craftsmen built the brick kiln without scaffolding in a very special way. Thin and light brick kiln achieved a maximum interior space with minimum materials, the brick kilns appeared in organic forms reflecting heat flow from one end to another.

The basic structure of the museum is an arch structure system, it is made up of concrete poured in between two layers of masonry brick walls. There is a small arch to be layout perpendicularly to connect two arches. 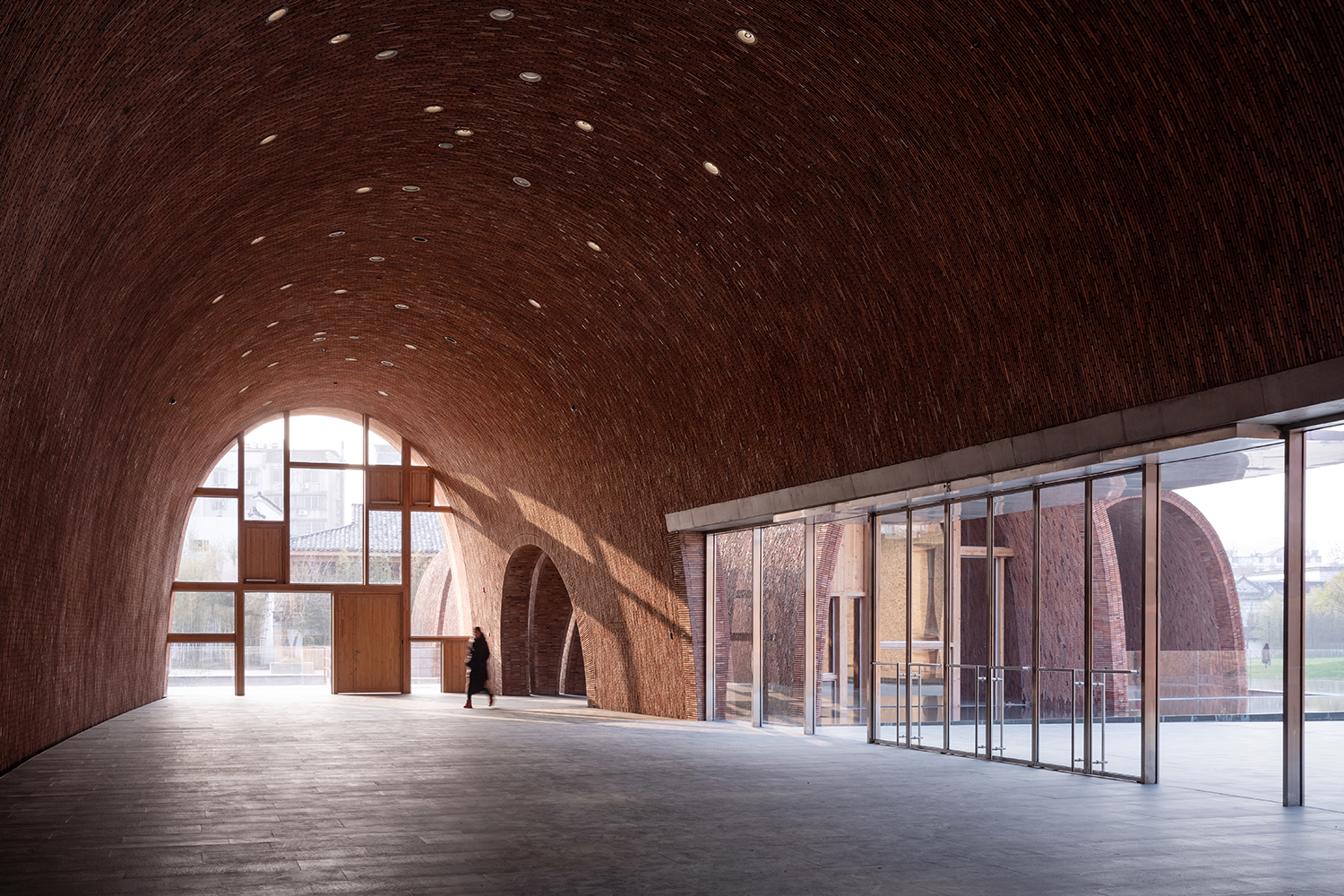 Using recycled kiln bricks to build houses and all kinds of buildings is a significant character in Jingdezhen because brick kilns have to be demolished every two or three years in order to keep a certain thermal performance of the kilns. The entire city was covered by recycled kiln bricks. Those bricks record warmth and are inseparable from the lifeblood of the city. In the past, the children would take a warm brick from the firing kilns to place in their schoolbags to keep themselves warm the whole day during freezing winter.

The materials of the museum are dominated by bricks, recycled old kiln bricks are mixed with new bricks to reflect the local culture of construction.

This interweaving of two different historical phases proposed by the combination of new and old bricks must arouse interest, curiosity, create new questions, and give new answers. These create interaction with people’s minds who inevitably evoke memories and enjoy a unique experience. The past cannot be erased but can be rewritten by recounting a new awareness and maturity, a sort of contemporary archeology.

The visitors can have a 360-degree sensory experience through the repeated contact between exterior and interior that stimulates the touch, smell, hearing, and sight and transports them into a sort of trip between past, present, and nature. 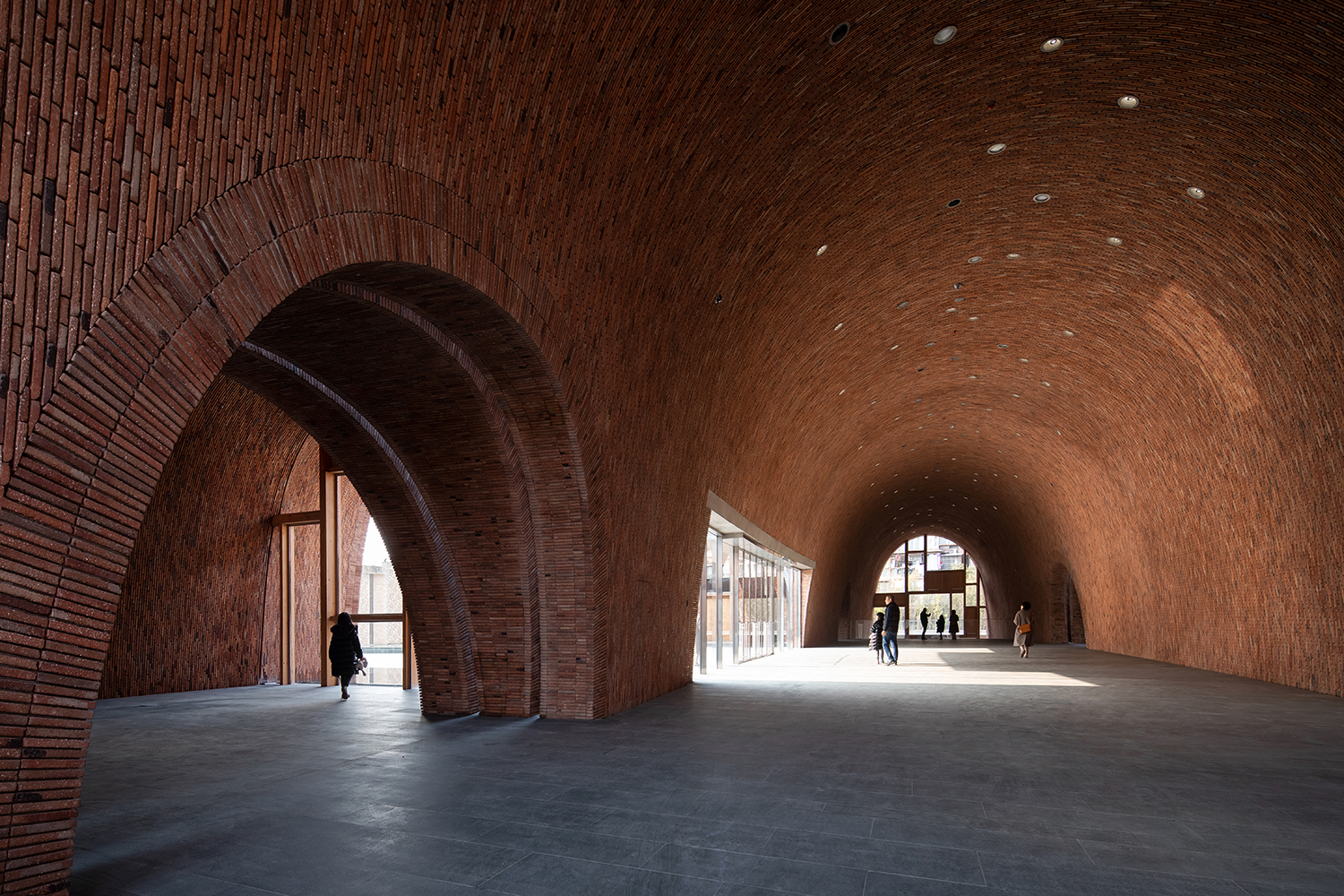 Even the light evokes active and tangible memories and is the proof of how ancient techniques can be reinterpreted and reread in a contemporary key.

The interior natural light is achieved by both skylight and sunken courtyard and is inspired by smoke holes of the ancient brick kiln. The skylight in the hollow cylinder shape is distributed on the top part of the arch to provide natural light during daytime and artificial light at night time. 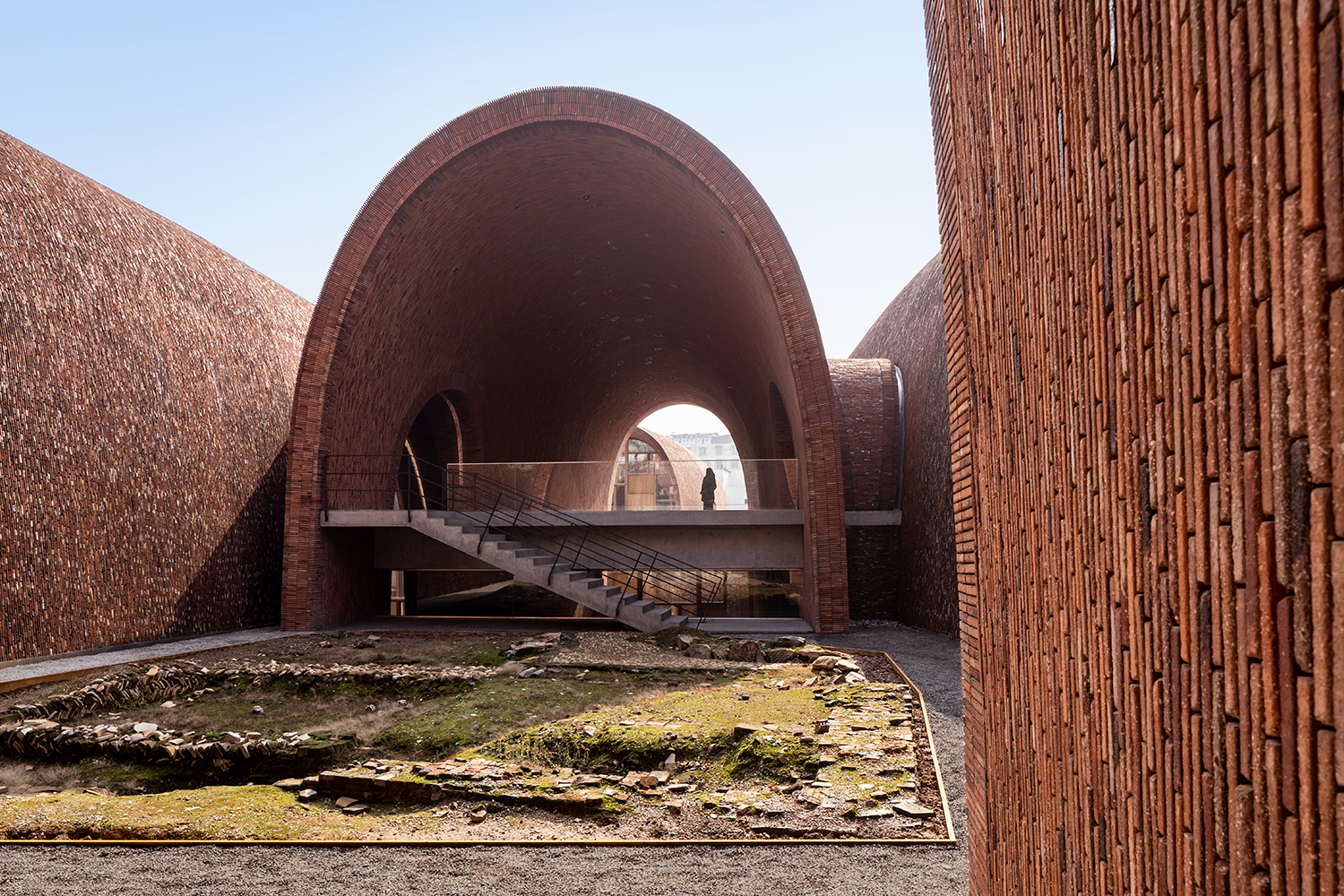 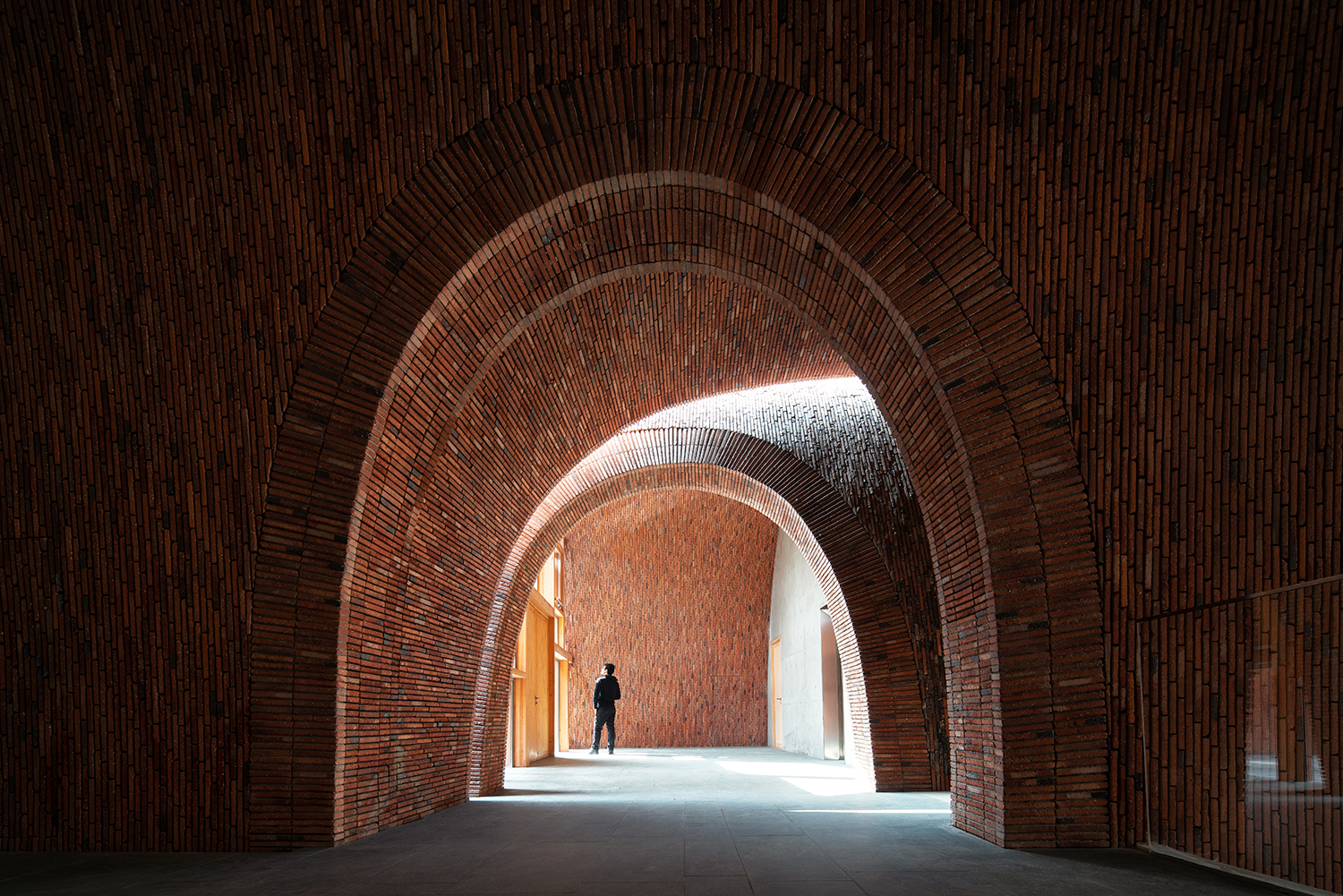 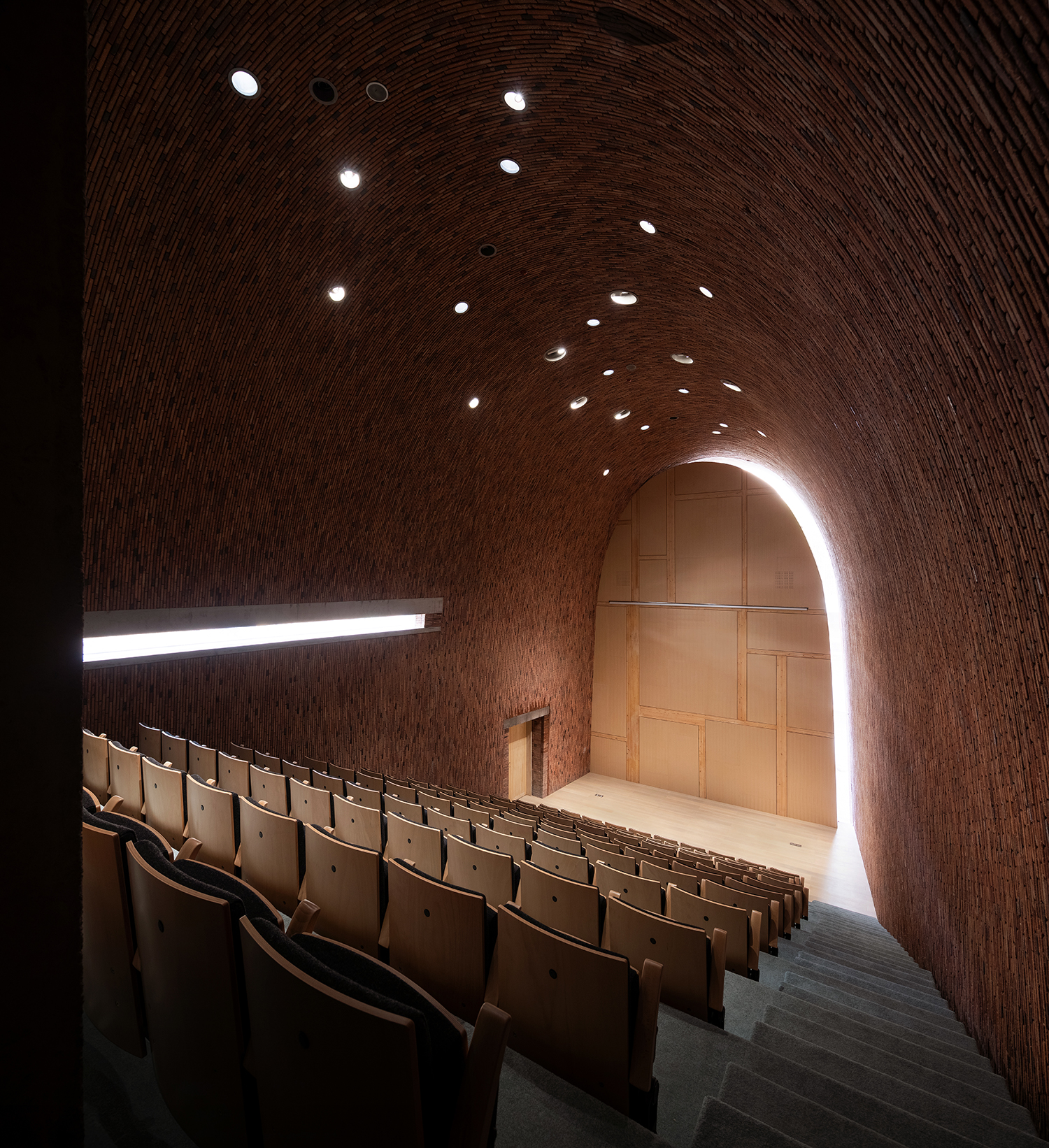 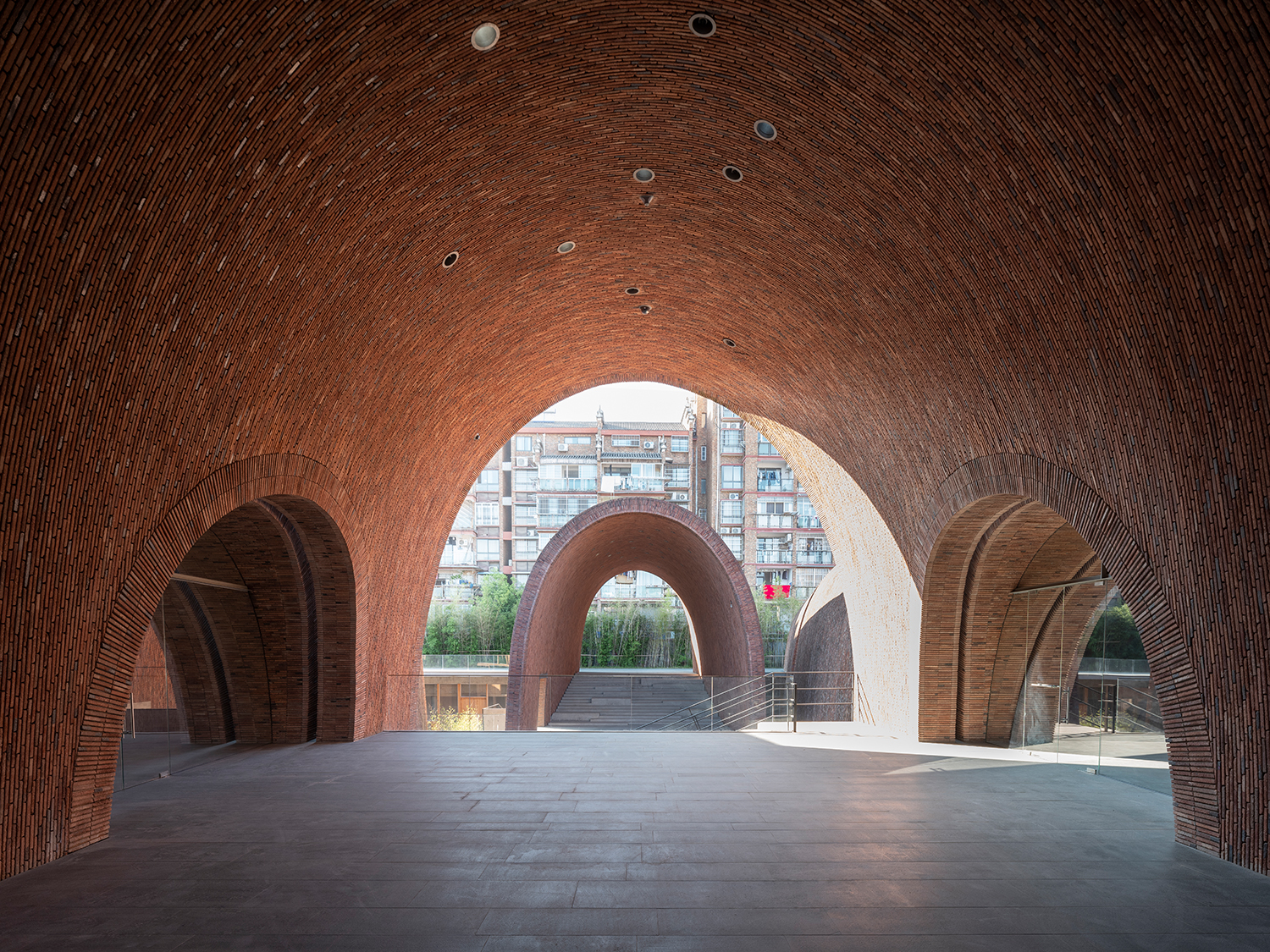 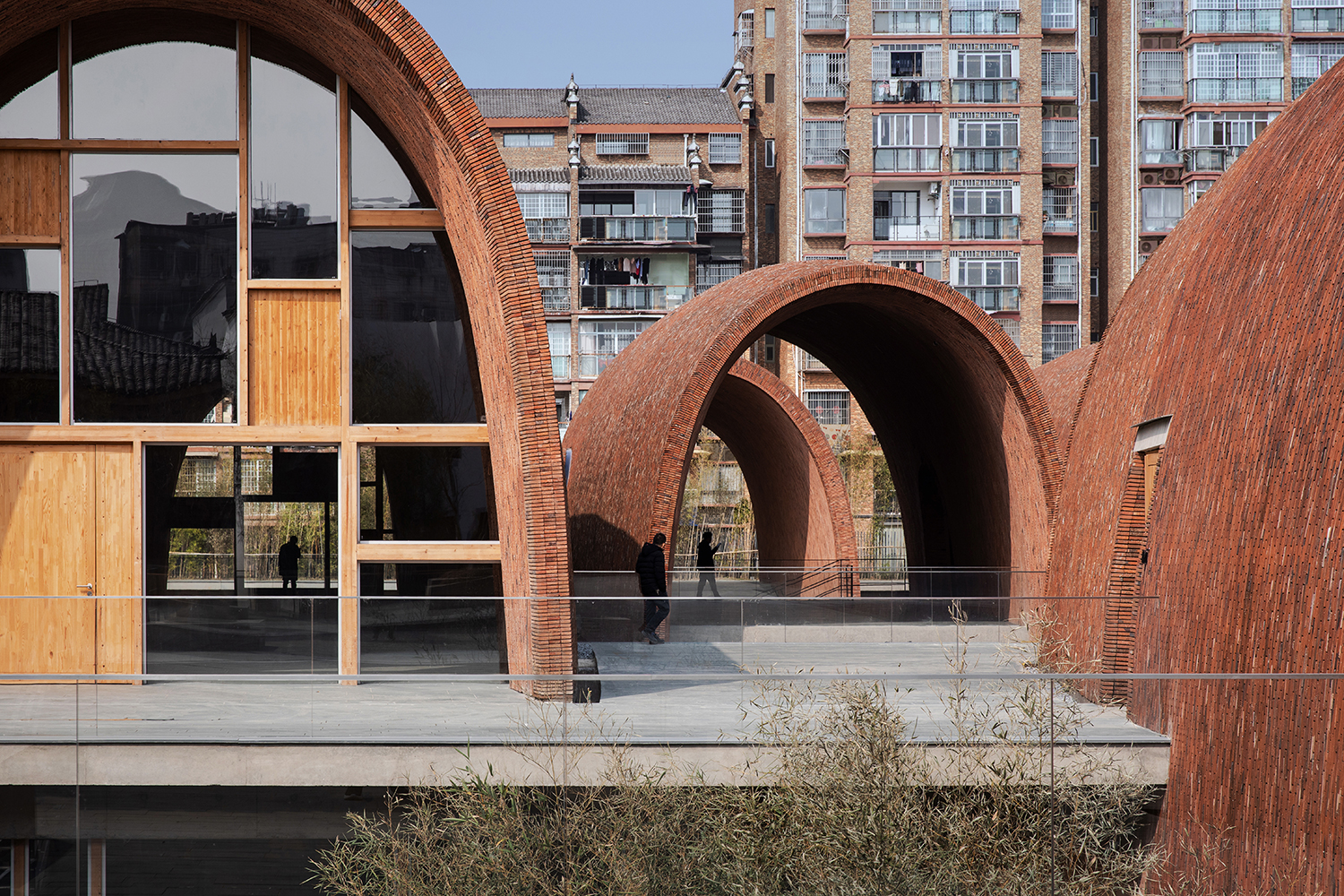 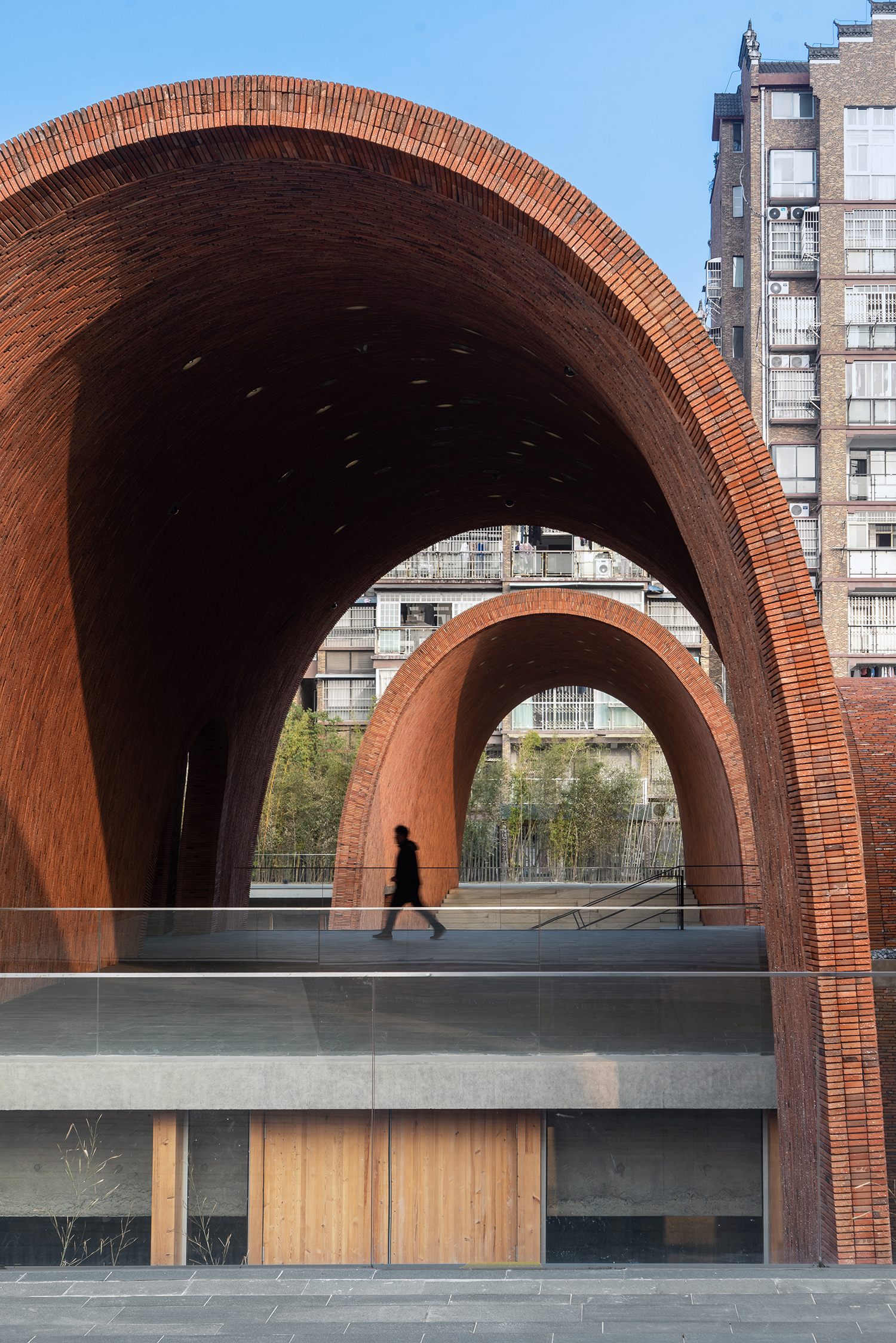 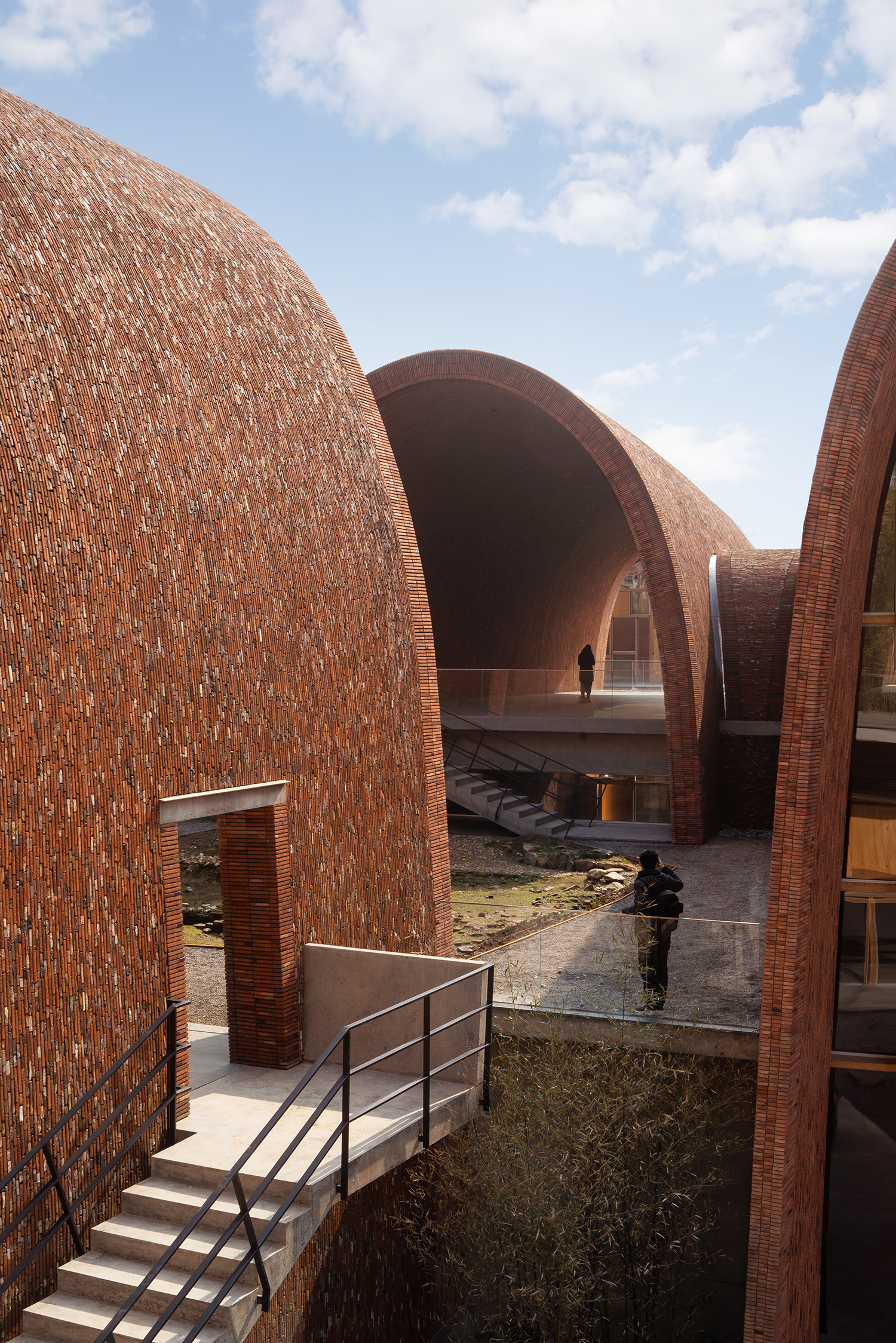 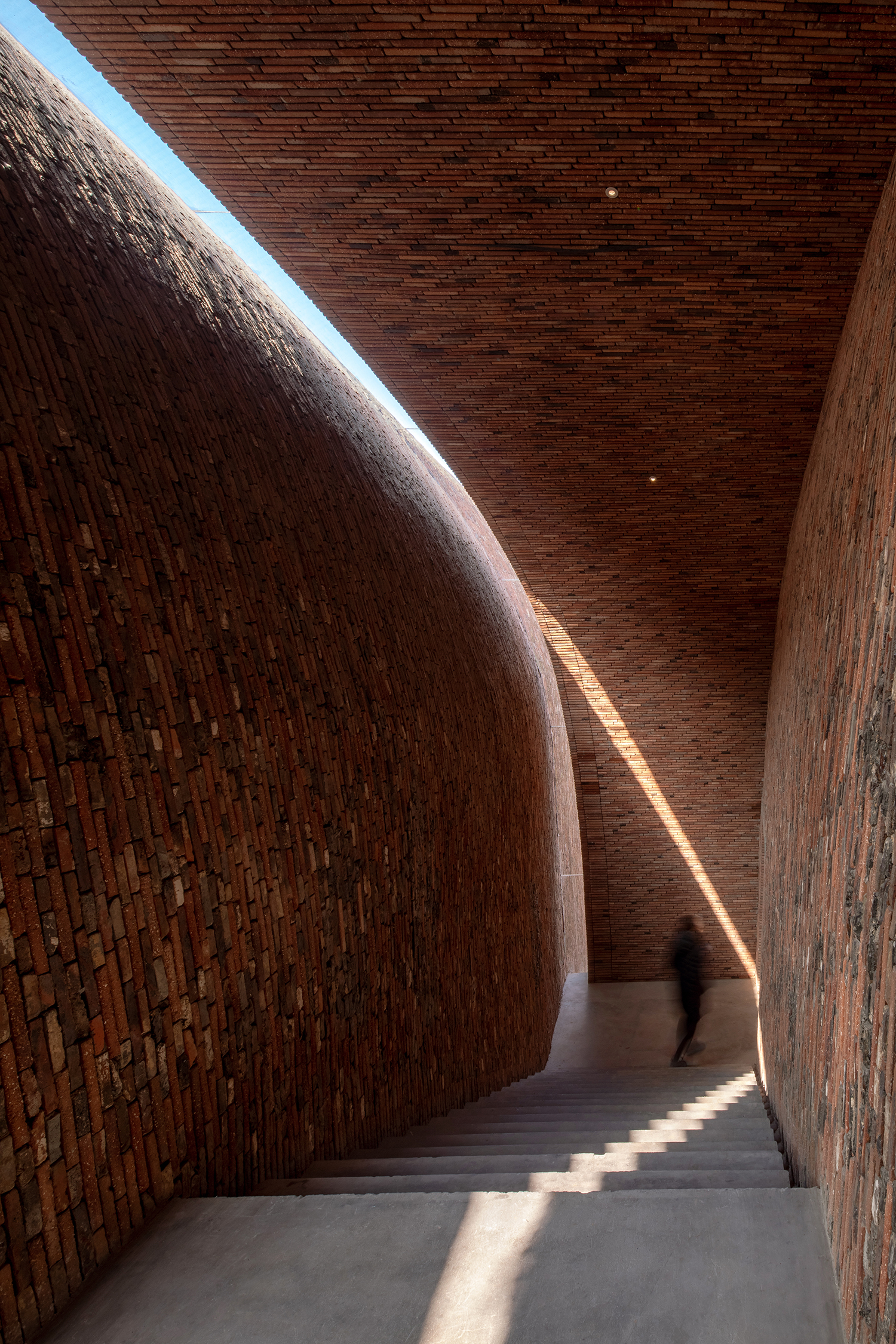