In addition to a new large installation by Zimoun, which can currently be seen in an exhibition in China, this new sound sculpture has a small format of 90x90cm. Small cork balls are activated by small direct current motors and are thus used for sound creation.

Zimoun is best known for his installative, generally site-specific, immersive works. He employs mechanical principles of rotation and oscillation to put materials into motion and thus produce sounds. For this he principally uses simple materials from everyday life and industrial usages, such as cardboard, DC motors, cables, welding wire, wooden spars or ventilators. For his works Zimoun develops small apparatuses which, despite their fundamental simplicity, generate a tonal and visual complexity once activated – particularly when a large number of such mechanical contraptions, often hundreds of them, are united and orchestrated in installations and sculptures.

When naming his works Zimoun consistently follows the principle of listing the materials used one after another. With this he brings materials to the fore; in addition, the titles signal the ‘prepared’ mechanism, indicating the connection to intentionally tonally manipulated musical instruments. In this manner this work is titled: ’52 prepared dc-motors, cork balls, mdf boxes, 2020′ 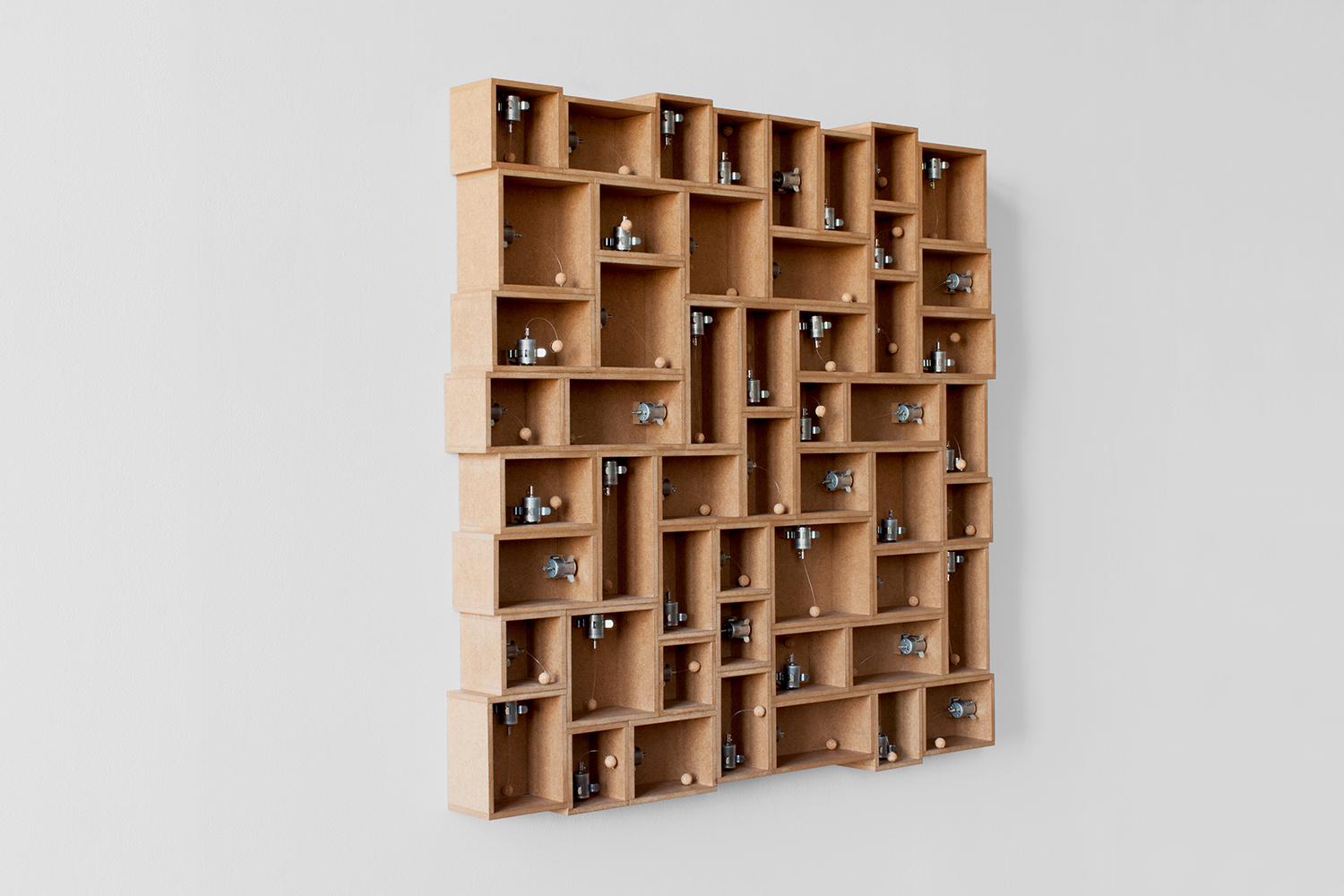 Zimoun’s works continually embrace oppositional positions, such as the principles of order and chaos. Works may be arranged in a geometrical pattern or ordered and installed according to a system, yet they behave chaotically and act – within a carefully prepared framework of possibilities – in an uncontrolled manner as soon as they are mechanically activated. As if in a clinical study, the pattern and the systematic approach enable an overview, so that the chaos generated by the mechanical process can be better analysed. Mass and individuality also belong among these oppositional positions, together with artifical vs. organic, or simplicity vs. complexity. 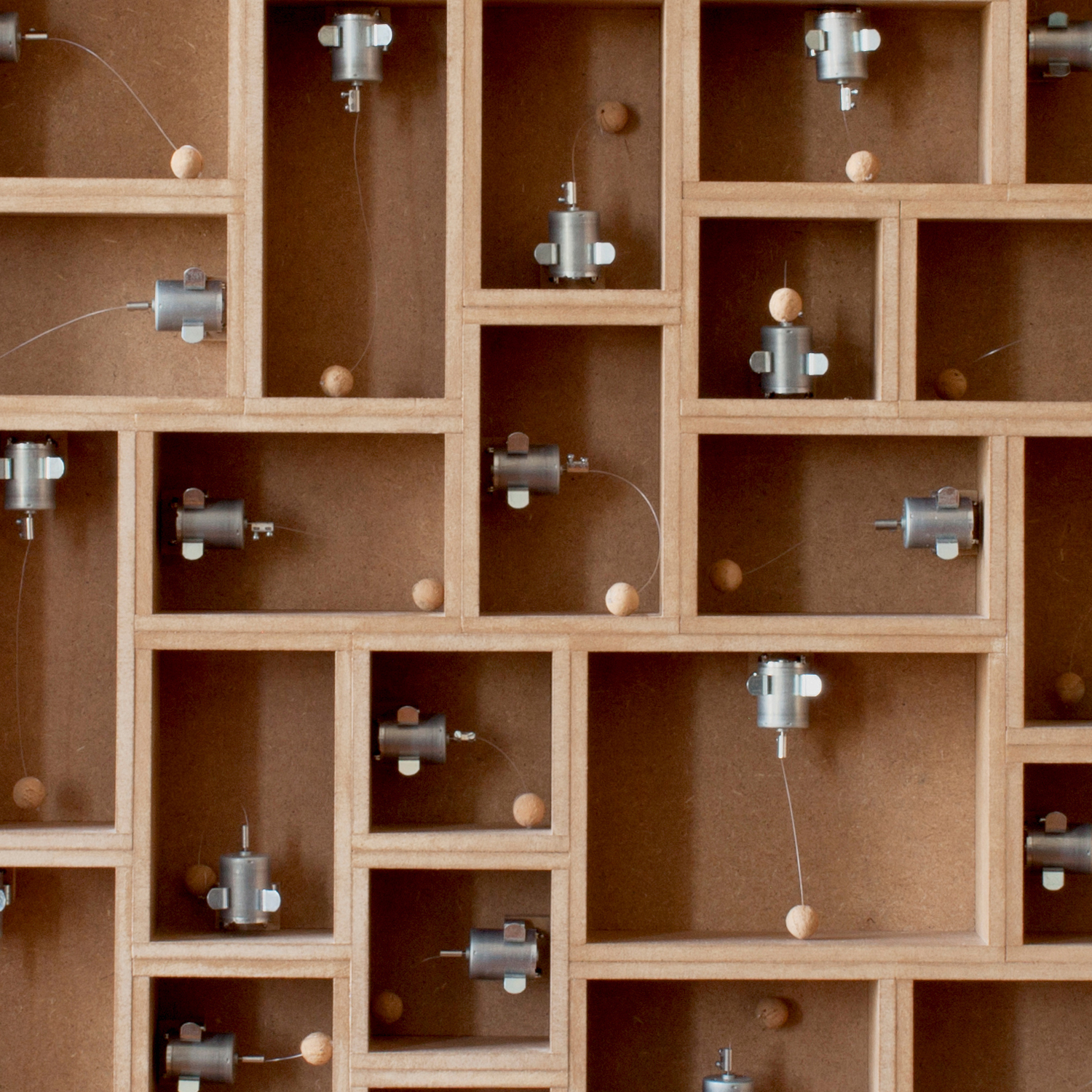 The works of Zimoun are located in different fields of the arts. On the one hand, his work is often very architecture-related, spatial and installative, with references to Minimalism in visual art, which is also evident in the simplicity, the structure of the works and the raw materials used. Also the immediacy and directness. On the other hand, next to the athmospheric characteristics of his work there is always the reference to sound and noise. Although Zimoun conceives of his installations also as compositions in a musical sense, he does not actively intervene in the development of their sound. He does not direct the mechanical systems implemented either in an analogue manner or digitally, via a microcontroller or a computer, instead merely activating them by turning on or off their electricity supply. Zimoun sees the moment of activation and the dynamic of the materials themselves as a sculptural and performative approach and names the principle behind these works ‘primitive complexity’.

Furthermore, Zimoun’s work always has a generative component, as the exact states of his installations never repeat themselves and their microstructures are constantly changing and transforming. The materials themselves develop highly complex algorithms and often feel very lively and organic.

“Working in the studio I often feel more like an explorer of things rather than as their inventor,” says Zimoun with regard to the development of his work. “In my work I do not try to transport specific associations, but rather to create atmospheric spaces and states that invite us to observe, think and reflect on various levels.”