In continuation of Homily to Country 2020’ at Australia’s NGV triennial, French artist JR presents a procession of four monumental 30-meters long portraits. Each captured by JR, the photographs are carried by the portrait subjects themselves — including local farmers, orchardists and local Baakandji community members. The procession made its way through the dry Menindee Lakes district in regional New South Wales to highlight the ecological decline of the Darling / Baaka River.

The procession was conceived by JR as part of his multifaceted, world-exclusive project for the NGV Triennial, Homily to Country, which draws into focus the complex issues of the river system as a consequence of intensive irrigation, climate change and drought.

Commencing at Lake Cawndilla, the procession honoured the personal stories and experiences of the four portrait subjects, including senior Baakandji Elder and respected spokesperson on the Darling / Baaka River, Badger Bates; orchardists Rachel Strachan and Alan Whyte, who have each been forced to remove their family’s once highly-productive commercial orchards due to lack of irrigation flows; and Wayne Smith, a sixth-generation farmer whose family have lived and worked along the river since the early 1890s. 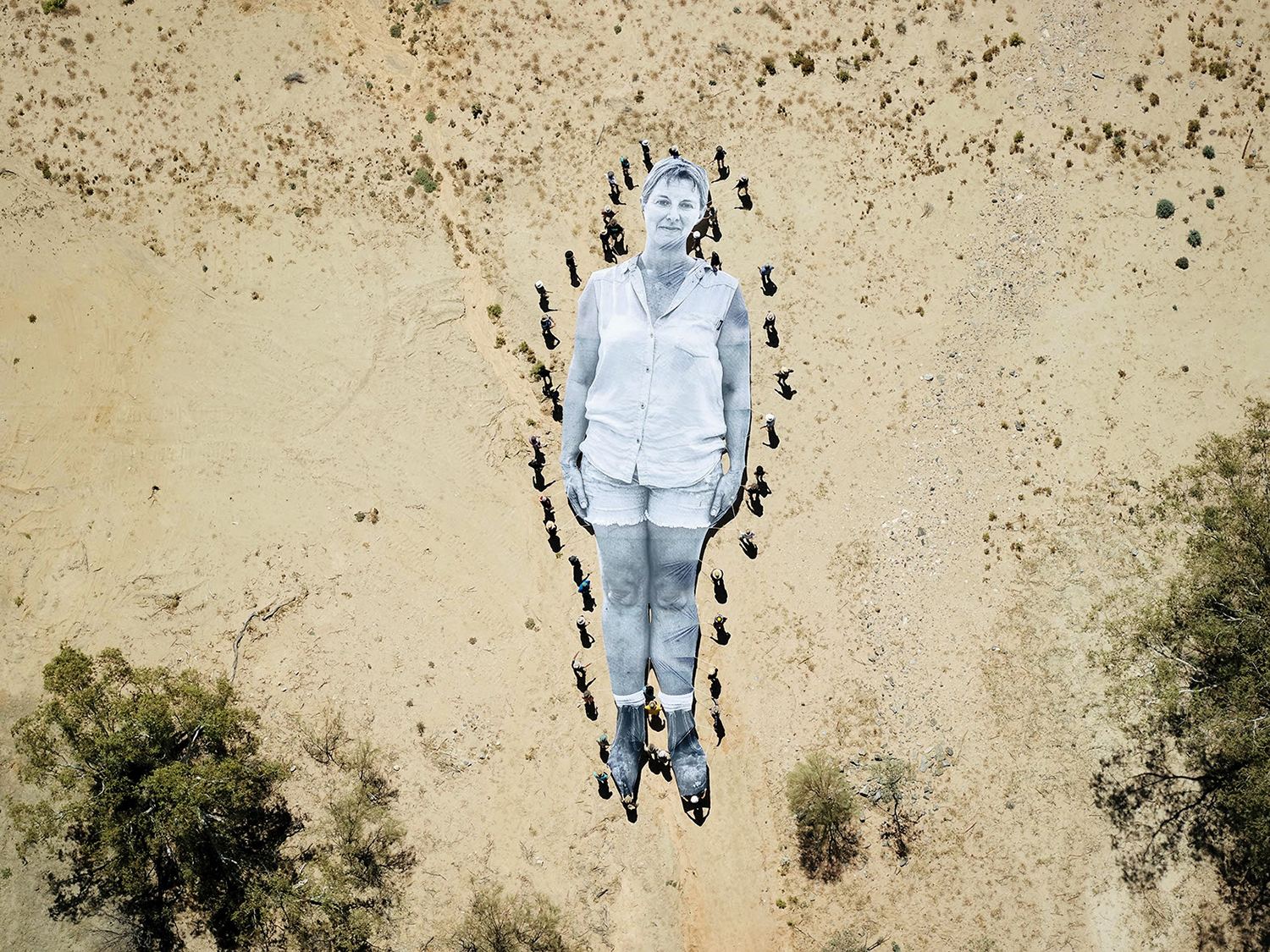 The portraits were captured by JR during a visit to the area in February 2020 and are intended to draw attention to the plight of individuals affected by the Darling / Baaka River’s decline. By incorporating JR’s large-scale photographs into the environment – a recurring visual motif in the artist’s practice – the procession symbolises the ways in which their stories are inextricable from the ecosystem itself. 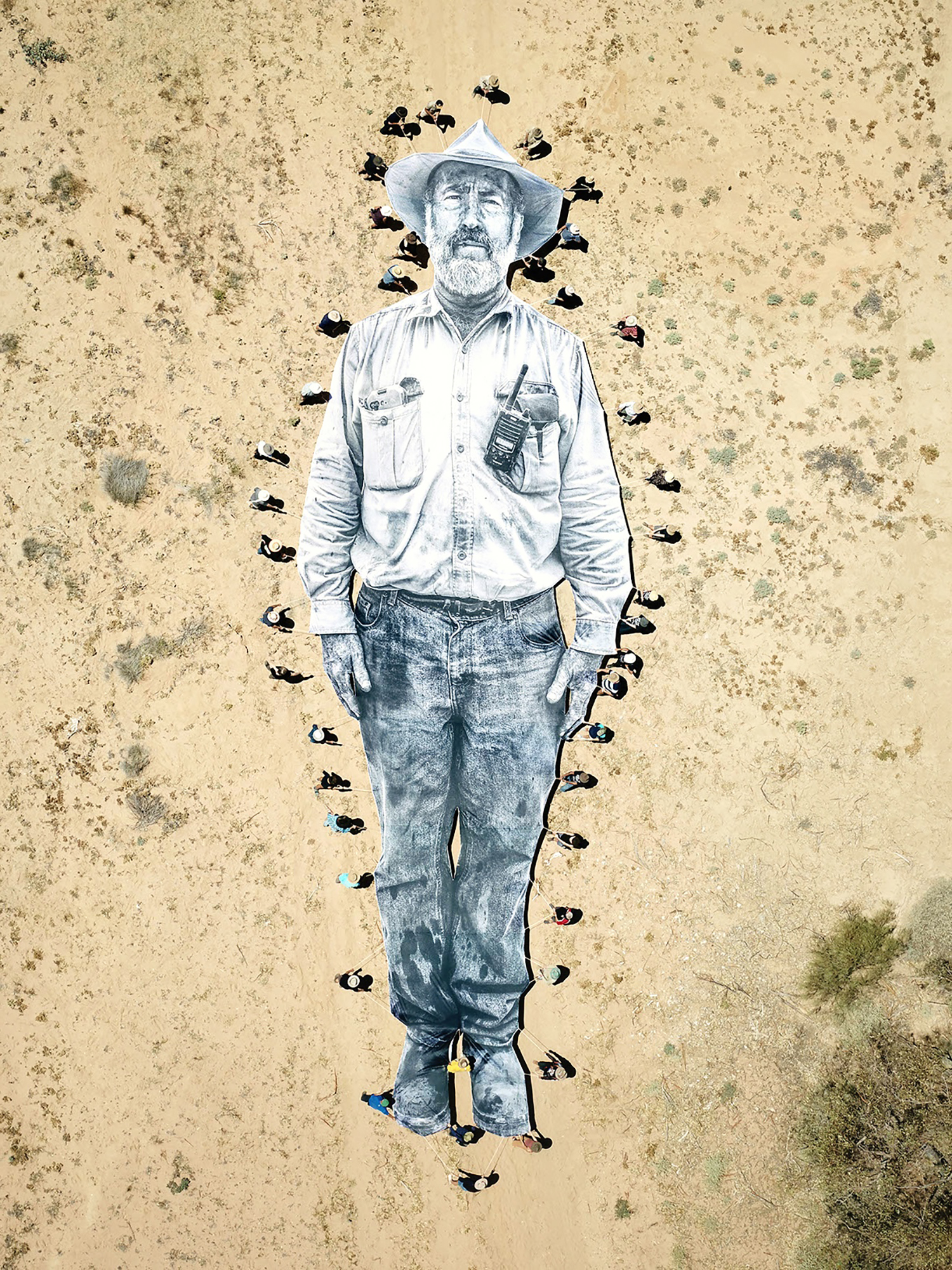 Commissioned by the National Gallery of Victoria especially for the NGV Triennial, Homily to Country comprises three elements; an open-air chapel in the NGV garden on display now at NGV Triennial which is inlayed with stained-glass windows based on photographic portraits of Strachan, Whyte, Smith and Bates; the live procession in the dry bed of Lake Cawndilla; and an accompanying film, which will include footage of the community procession. 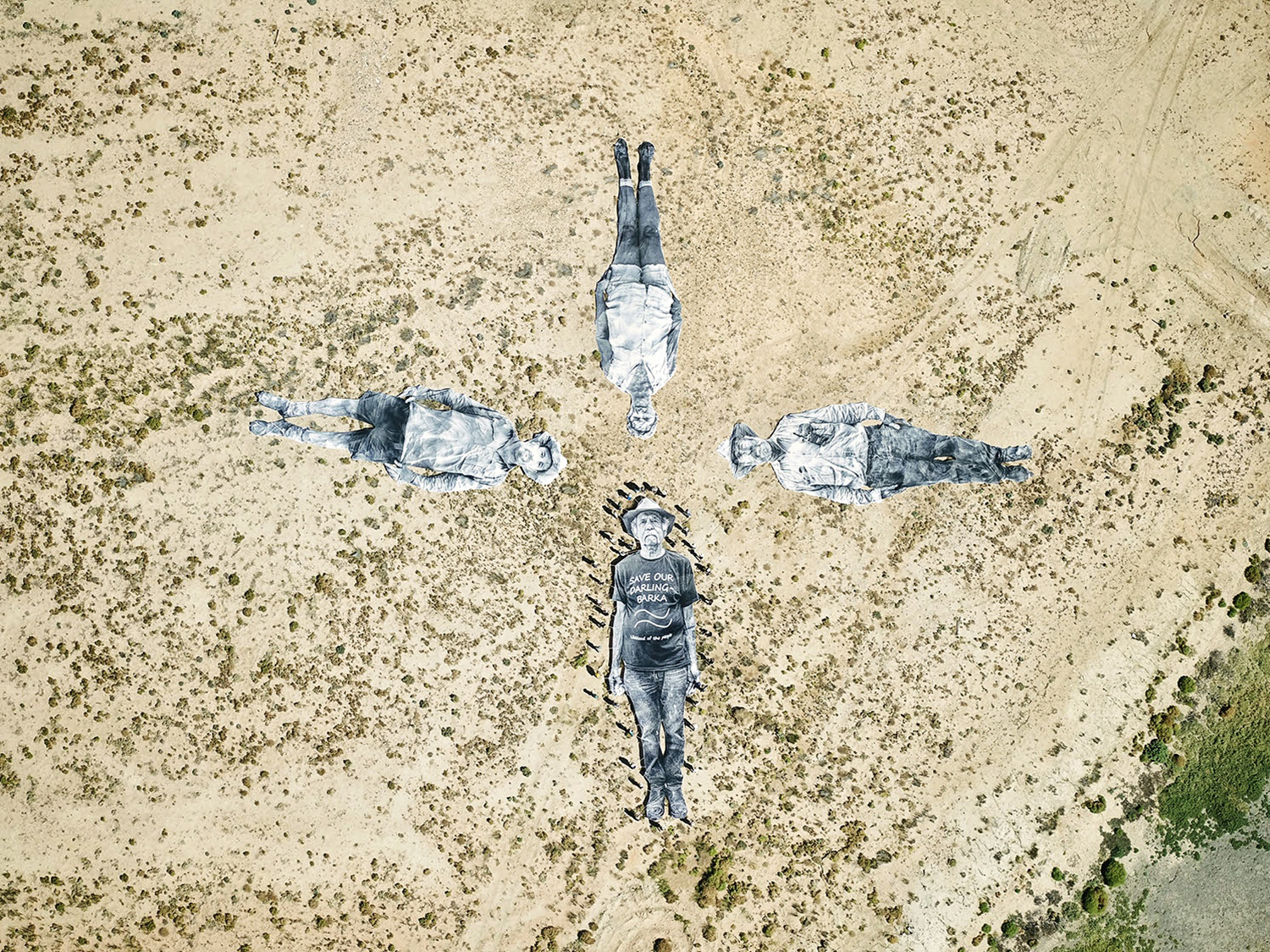 “Through this ambitious project, JR explores one of the most significant ecological issues facing Australia today,” says Tony Ellwood AM, Director, NGV. “The procession in the Menindee Lakes district as part of JR’s thought-provoking Homily to Country work in the NGV Triennial, highlights important local voices and gives global attention to the environmental concerns of the Murray-Darling River.”

“I started this project in Italy, very far from Australia, yet farmers have similar issues: protect their environment and live decently from their work,” said JR. “Like many people this past year who were not able to participate in important life moments, I will follow the procession remotely but will surely feel the presence of all the people gathered.” 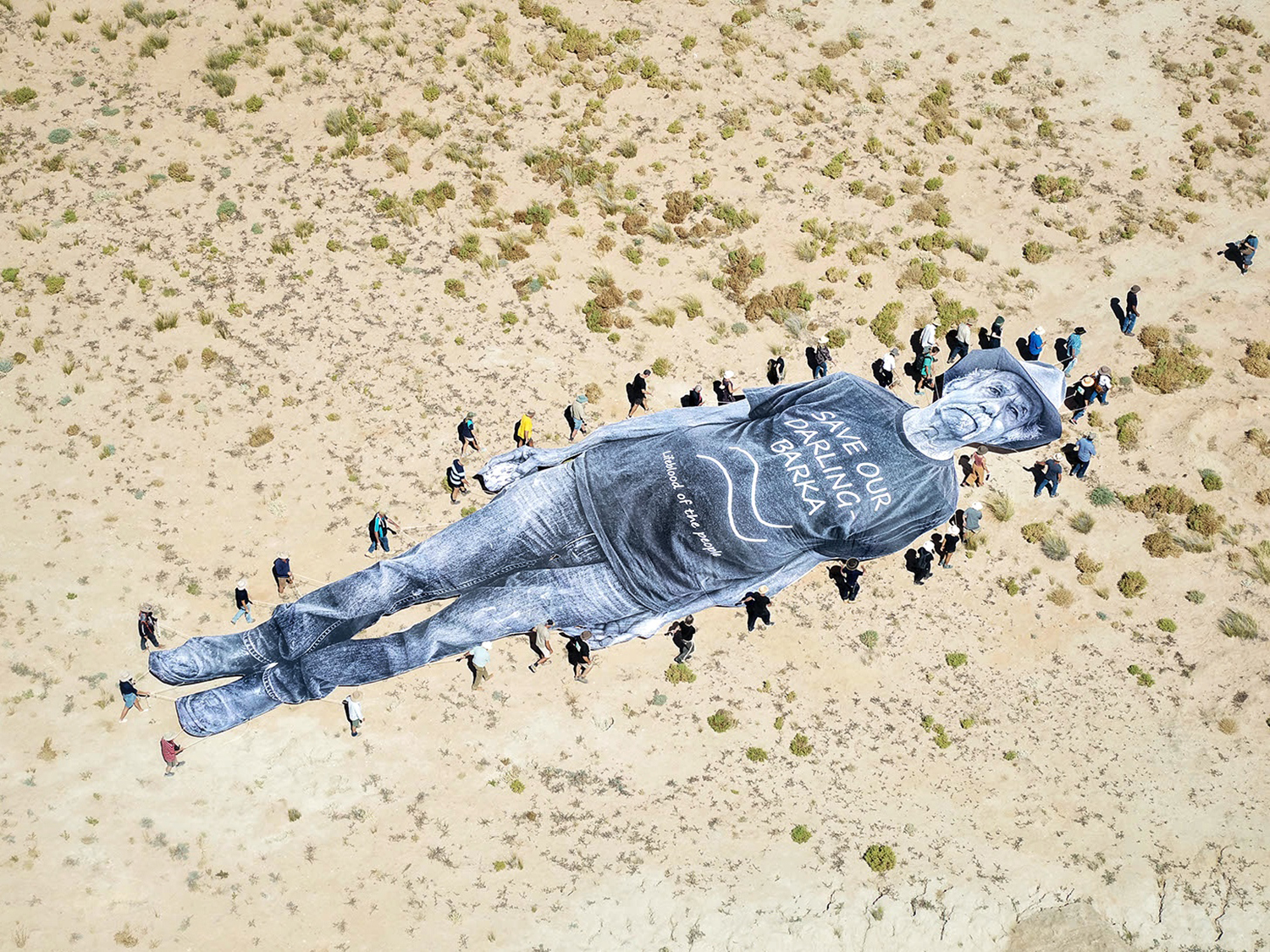 The Darling / Baaka River is the major tributary to the Murray-Darling River system – the largest system on the Australian continent. The river’s ecological decline has had a widely reported impact on the broader agriculture and natural ecosystems dependent on this network of waterways, including those in NSW, Victoria and South Australia. 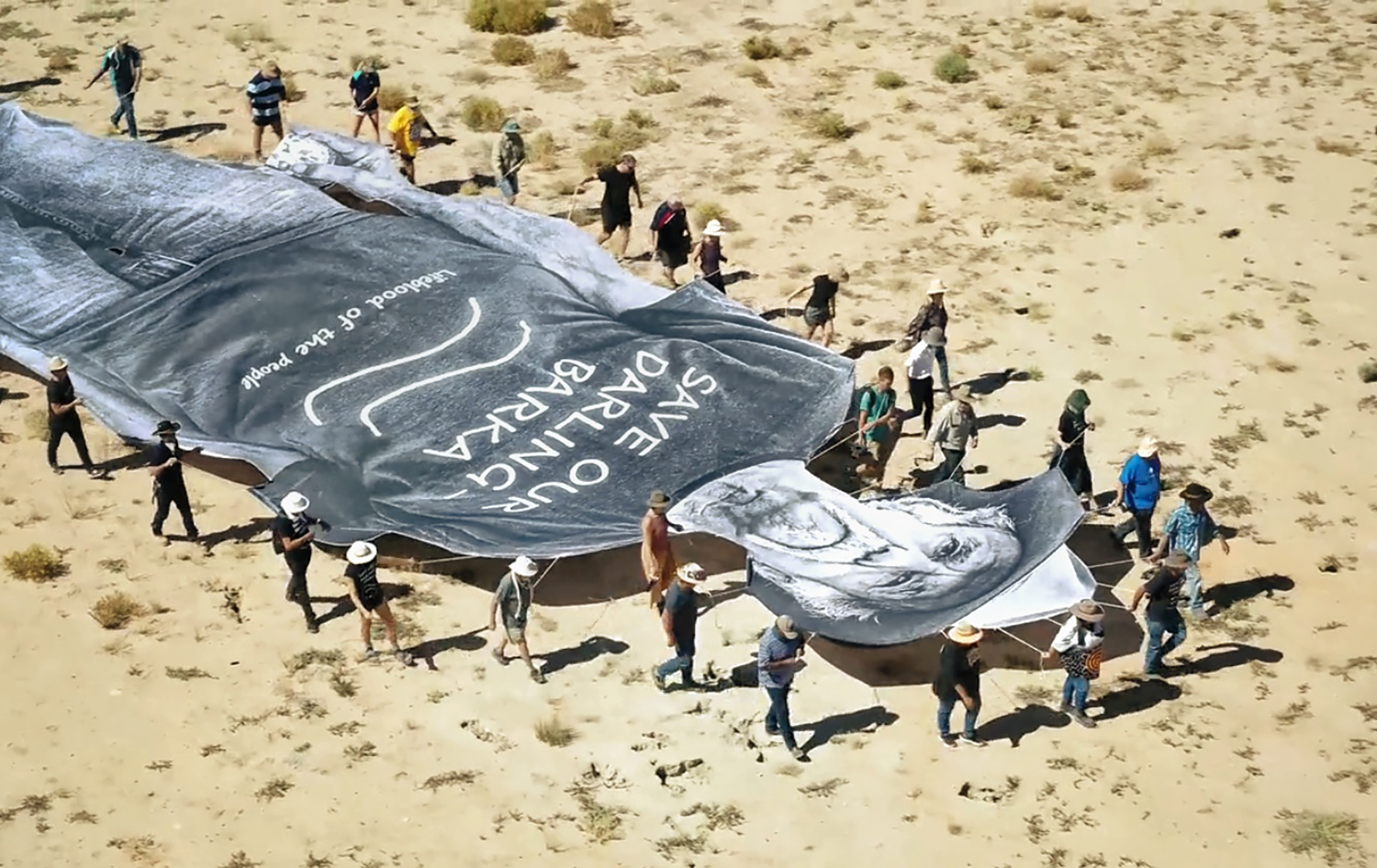 Some community members in the region, including the portrait subjects in JR’s work, are calling for a re-evaluation of river policy and more sustainable irrigation practices, advocating for a new river management system based on ecological flows and Indigenous land management practices as a new benchmark to improve the health of the river.

“Baaka is the name of our beautiful river, and it is who Baakandji people are, people of the river,” says Badger Bates. “Baakandji never left our land, we are still here, we love our land and it loves us. We have stories that explain its creation and how everything works, so we know how to look after it.” 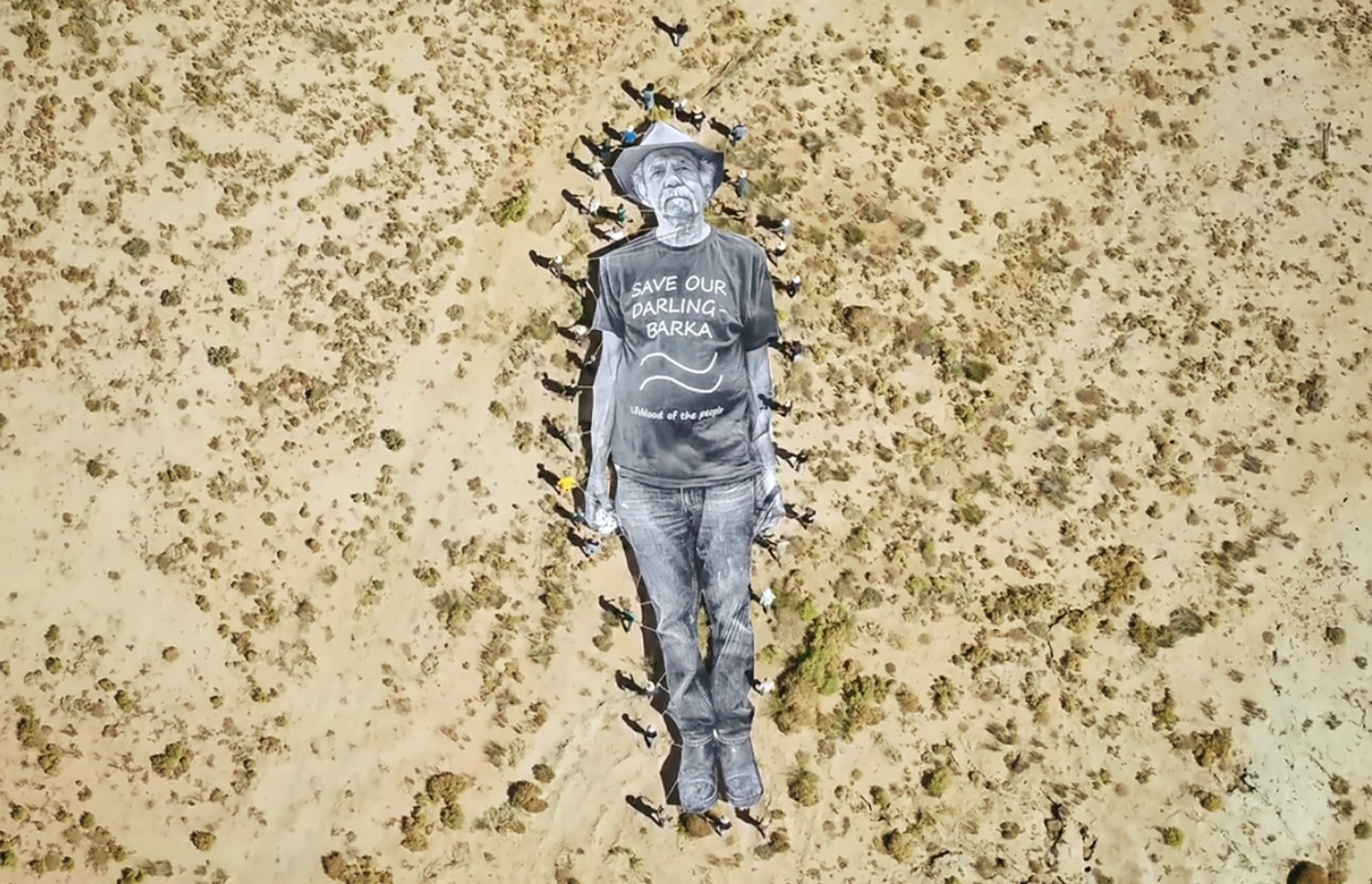 The Australian project is an extension of JR’s ongoing interest in the plight of farmers globally. Omelia Contadina, 2020, a film by JR and director Alice Rohrwacher, also on display as part of the NGV Triennial, illuminates the loss of farming traditions and access to land as a consequence of intensive industrial-scale agricultural practices in parts of Italy.