Melbourne-based architects Adam Newman and Kelvin Tsang have built a colorful scaled-down version of Greece’s famous Parthenon temple. Built at a third of the scale of the original temple, Temple of Boom has been installed in the garden of the National Gallery of Victoria (NGV) in Melbourne for its NGV Architecture Commission.

A global architectural icon, The Parthenon on the Acropolis in Athens, an Ancient Greek temple, is an apex symbol of Western civilisation, democracy and perfection. Temple of Boom celebrates these interpretations, while simultaneously expanding our understanding of the iconic Parthenon building and the enduring beauty it emanates.

This year’s commission invites audiences to consider the effect of time on all architecture as the structure gradually transforms with large-scale artworks and murals painted by local artists in three phases between November 2022 and August 2023. 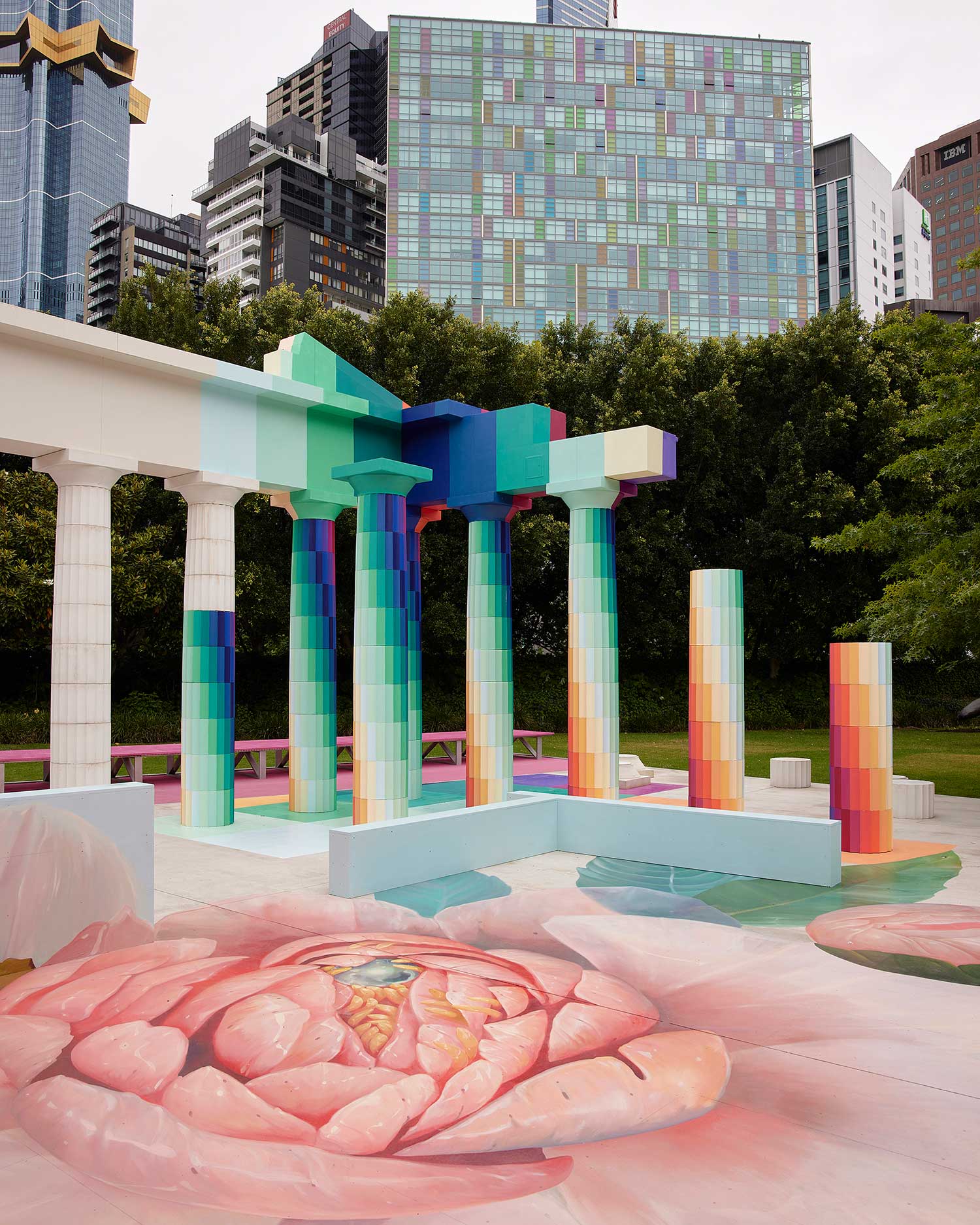 Drawing inspiration from the colourful and artistic embellishments that once covered the original building over two- thousand years ago, Temple of Boom debuts with dynamic and eye-catching designs ranging from floral motifs to optical illusions by contemporary artists Drez, Manda Lane, and David Lee Pereira.

Drez is a multidisciplinary artist based in Melbourne who uses colour and form to play with perspective. Drawing inspiration from art historical perspectives, including the Greenbergian Modernism and Op-Art schools, Drez’s work creates an intersection between abstract art and street art. For this installation, Drez has created a boldly colourful mural that changes composition when viewed from different angles. 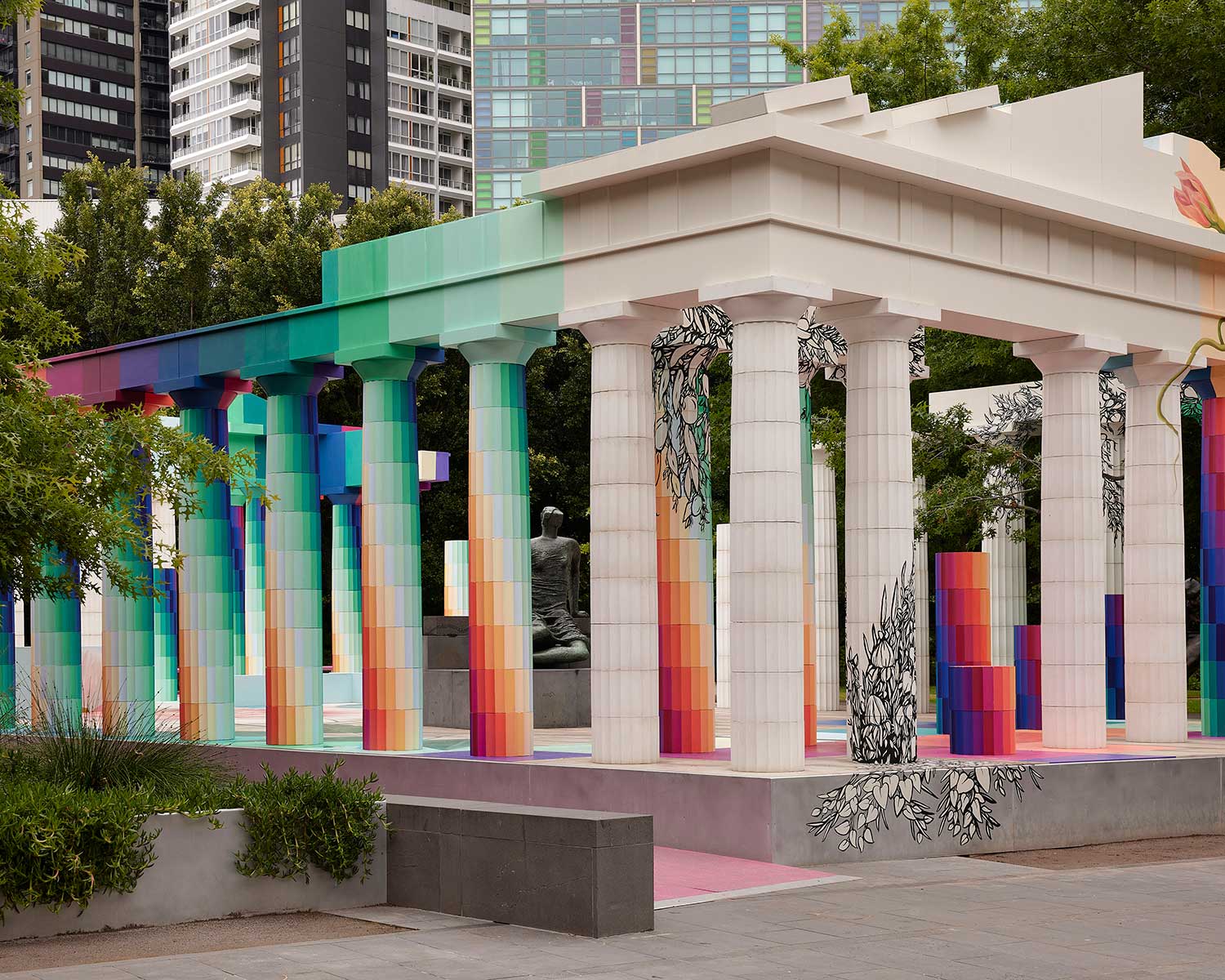 Manda Lane is a muralist, illustrator and paper-based artist from Collingwood, Victoria. With a keen focus on botanicals, her art explores the interactions between the natural world and industrial or man-made objects. In this mural installation, Lane has depicted various growth behaviours of plants, creating a visual metaphor for personal expression and growth. 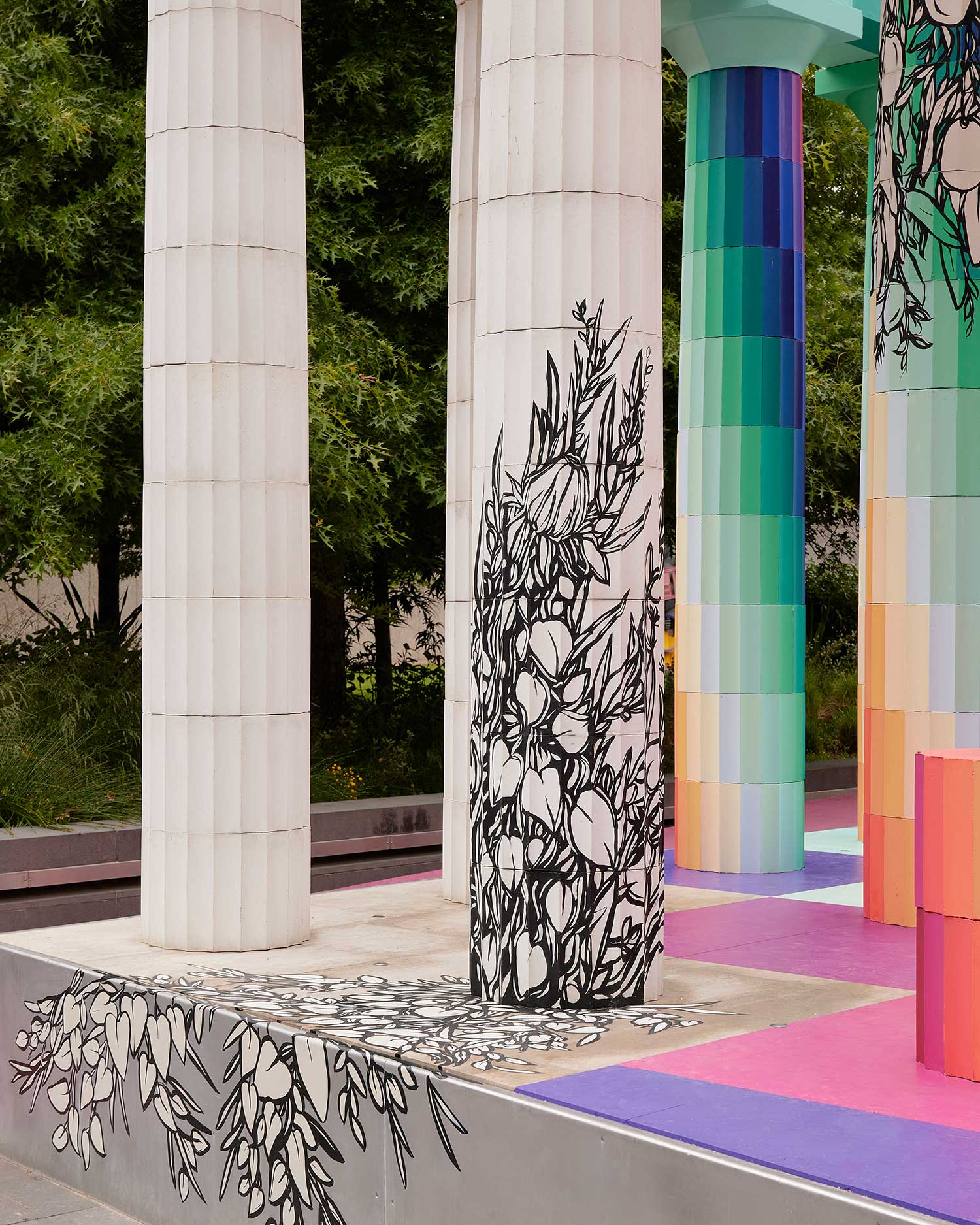 David Lee Pereira is a visual artist whose works explore the fluidity of gender, sexuality and identity. Influenced by the work of impressionist and surrealist artists Georgia O’Keefe, Salvador Dali and Edvard Munch, Pereira has adorned the structure with large-than-life floral motifs that draw attention to nature’s flamboyant use of scent and colour to allure pollinators.

Taking its name from the vibrations of music, Temple of Boom will be a community meeting place and an outdoor venue for a diverse program of performances, programs and music across the summer period. 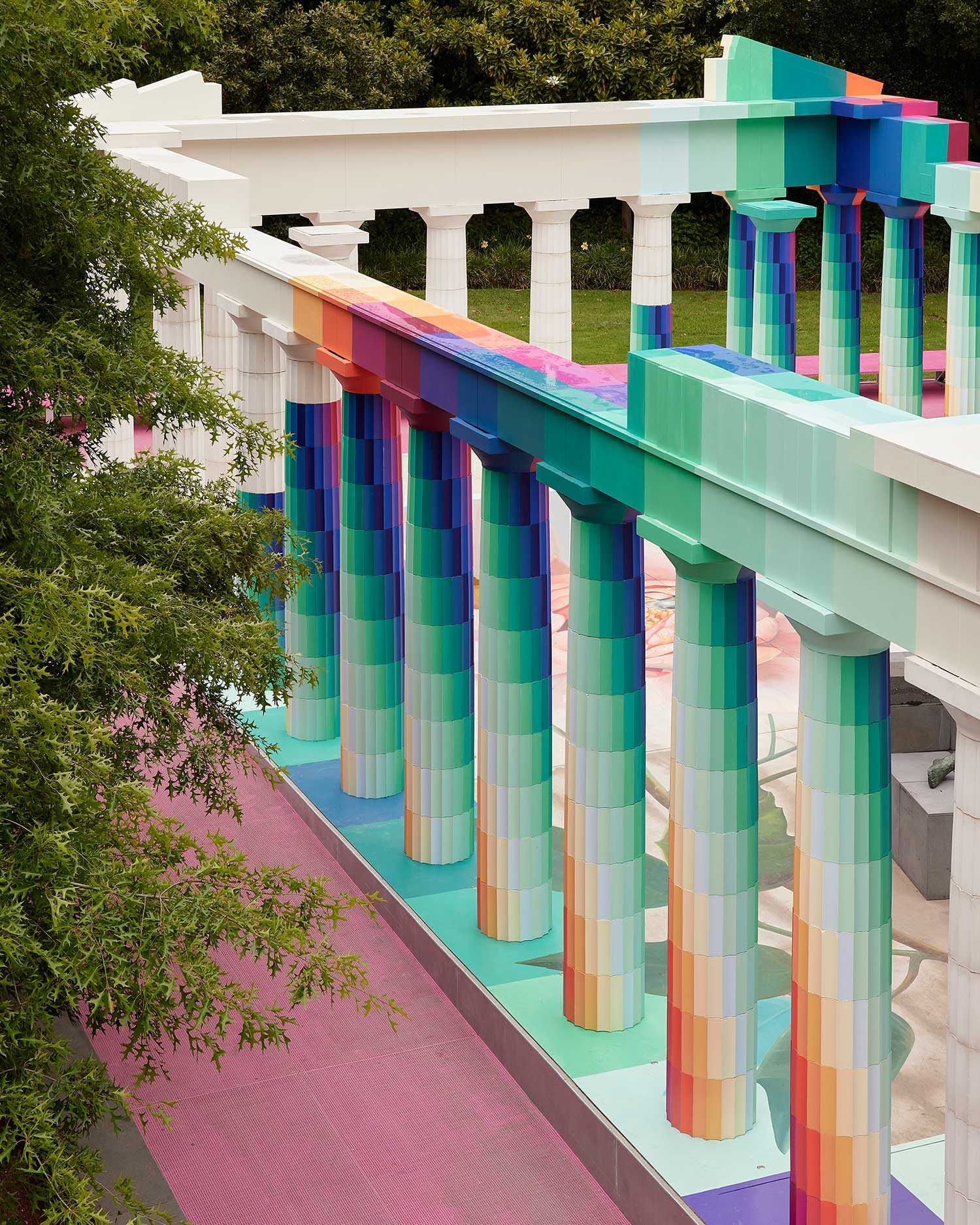 Presented in partnership with the Hellenic Museum Melbourne, audiences can engage with a program of panel discussions, performances, and a VR experience transporting visitors to The Parthenon and allowing them to walk virtually around the Acropolis in Greece. The historical and cultural significance of the Parthenon and its continuing resonance for the Greek diaspora will be celebrated with further programming across the nine-month installation.

Weekly from 16 December to 14 April, some of Melbourne’s best DJs will also perform as part of the return of NGV Friday Nights this summer. 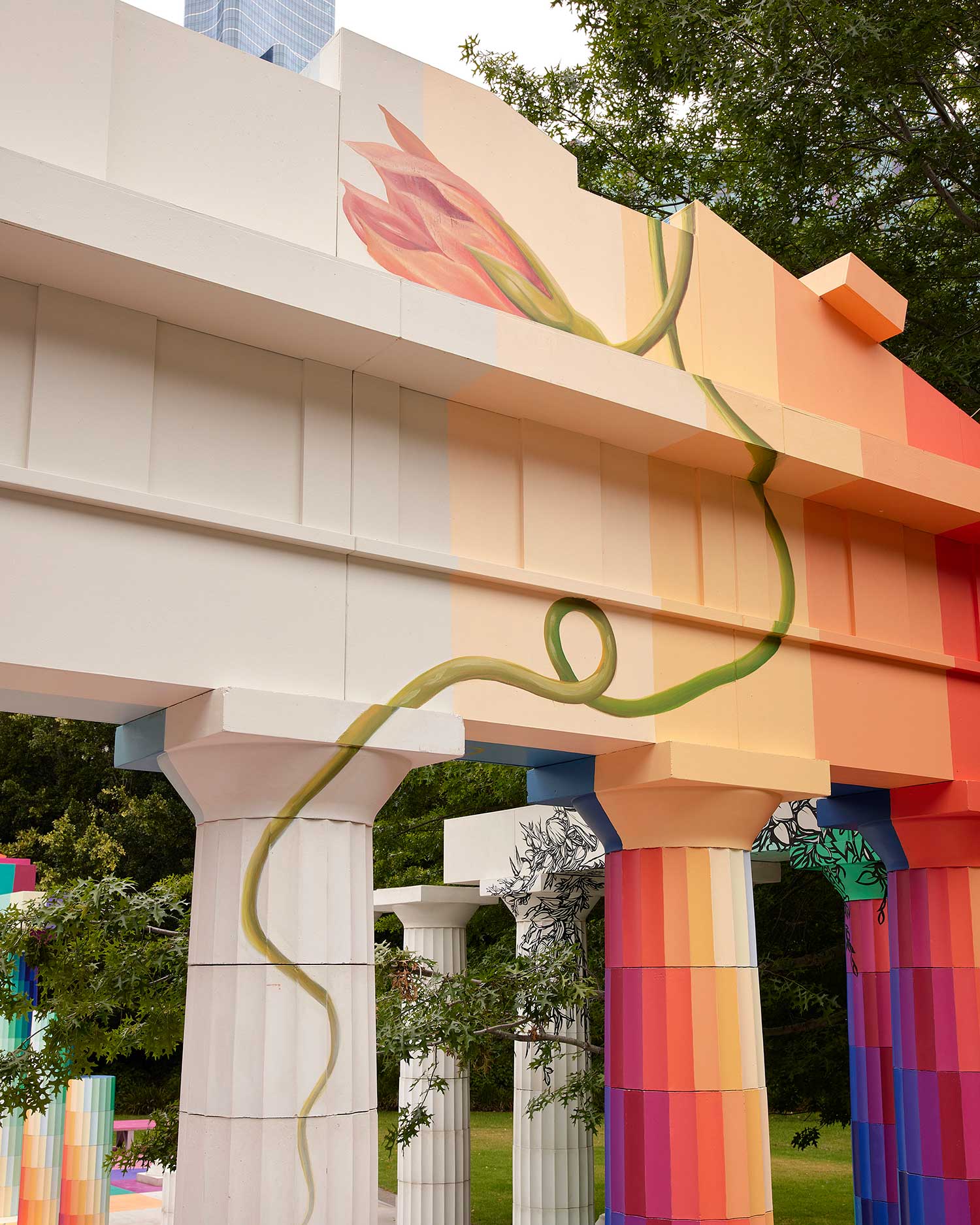 “One of the most famous examples of classical architecture, The Parthenon in Athens is often viewed as a potent symbol of Western art and culture,” said Tony Ellwood AM, Director of the NGV. “This thought-provoking work by Adam Newman and Kelvin Tsang invites us to consider how we create and imbue architecture with meaning, as well as how this meaning can shift across time periods and cultures.”