Until Feb. 12, 2023, Superstudio, one of the busiest exhibition spaces at FuoriSalone during Milan Design Week in the Tortona district, will host the installations of eighteen international artists and collectives. Following the exhibitions in Rome and Paris, Balloon Museum is now presenting Pop Air in Milan with a new dynamic and fun installation whose works occupy a space of over six thousand square metres, designed to spark an emotional dialogue with the public.

Pop Air reflects on the new artistic expressions and techniques associated with the world of interactive exhibitions, by promoting unprecedented and site-specific works selected by Balloon Museum’s curatorial team, made up of professionals operating in the world of art, culture and communication. 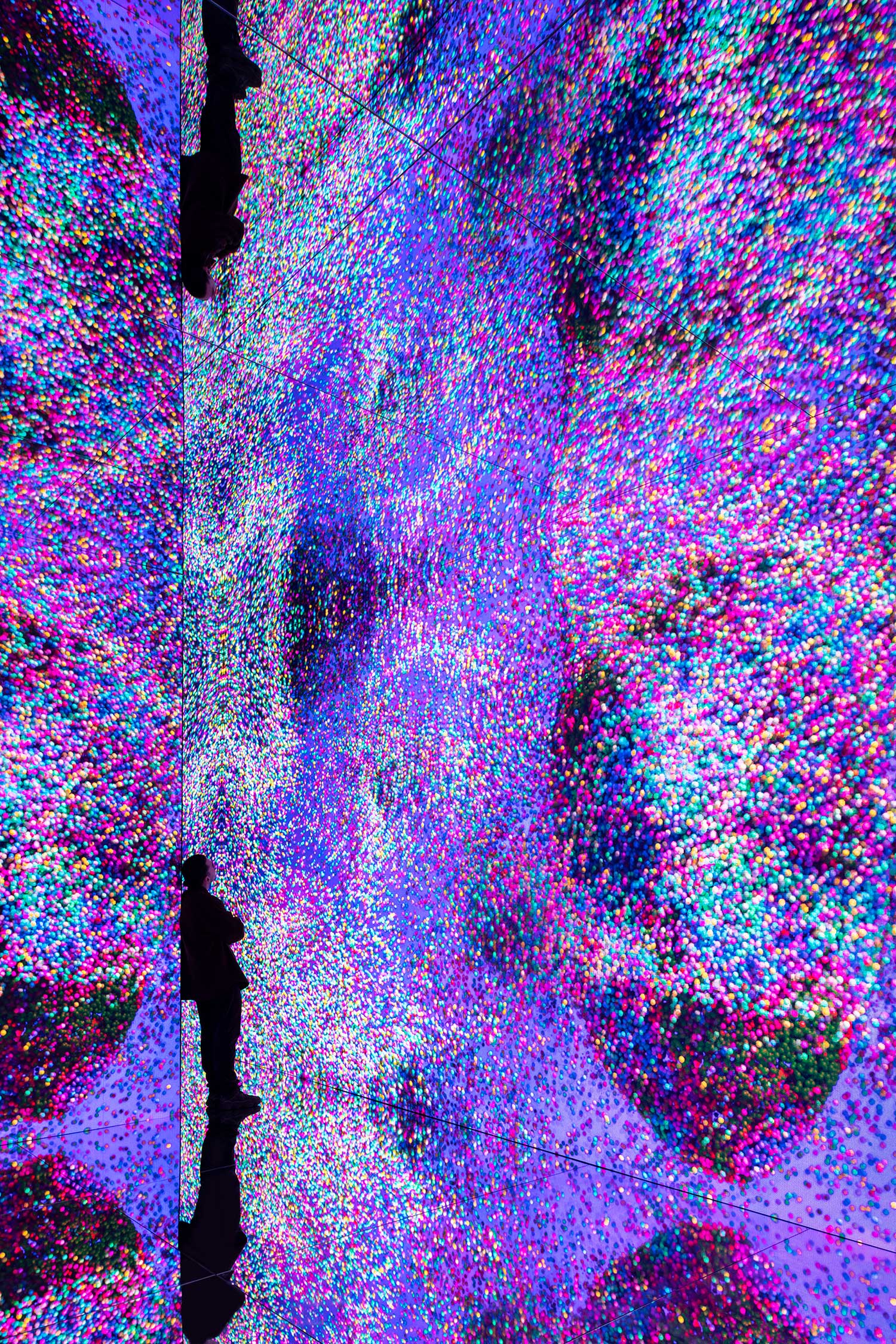 The artists involved have all focused their research on all aspects of air: from being a tangible element of construction, an authentic sculpture of amazing monumental forms, to metaphysical and suspended atmospheres, endowed with a hazy and impalpable personality.

Each inflatable installation, thanks to its interaction with the onlooker, creates new spaces of physical, digital, and cultural socialisation. In fact, people are at the centre of an experiential trail involving the senses and giving rise to amazement, curiosity, and thoughts on contemporary topics. 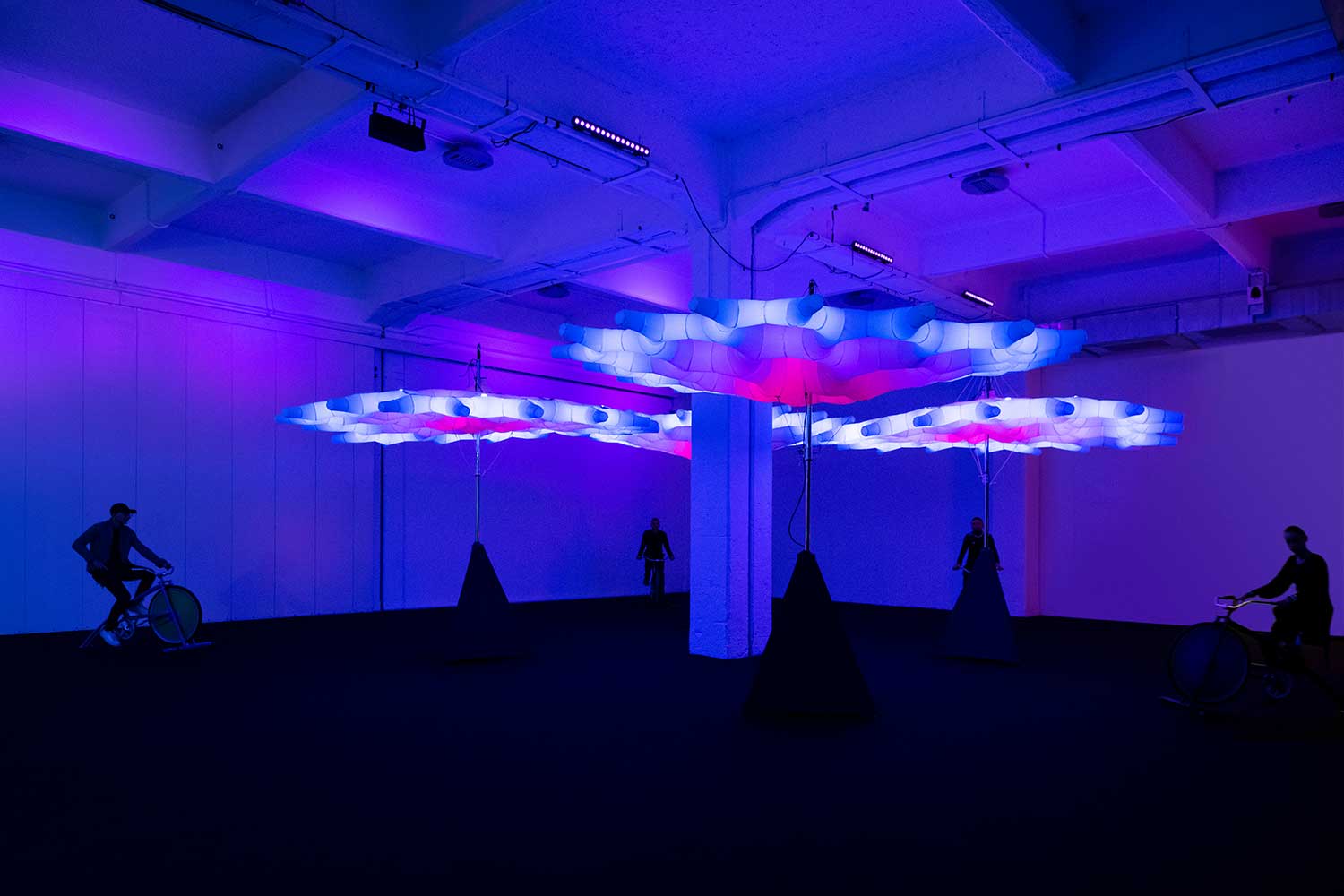 Zoomorphic-like figures animate the exhibition trail with their bright colours and out-of-scale shapes that defy convention. One such installation is that of Airship Orchestra by Eness, a tribe of ironic-looking and playful figures accompanying visitors as they walk through and live an amazing audio experience in which light and music are engaged in a dialogue.

Sculptor Max Streicher presents Silenus, a sleeping giant of monumental dimensions whose vulnerability is revealed to the spectator. Thanks to inflatable technology, he seems to breathe or make lethargic movements, as if on the point of waking. 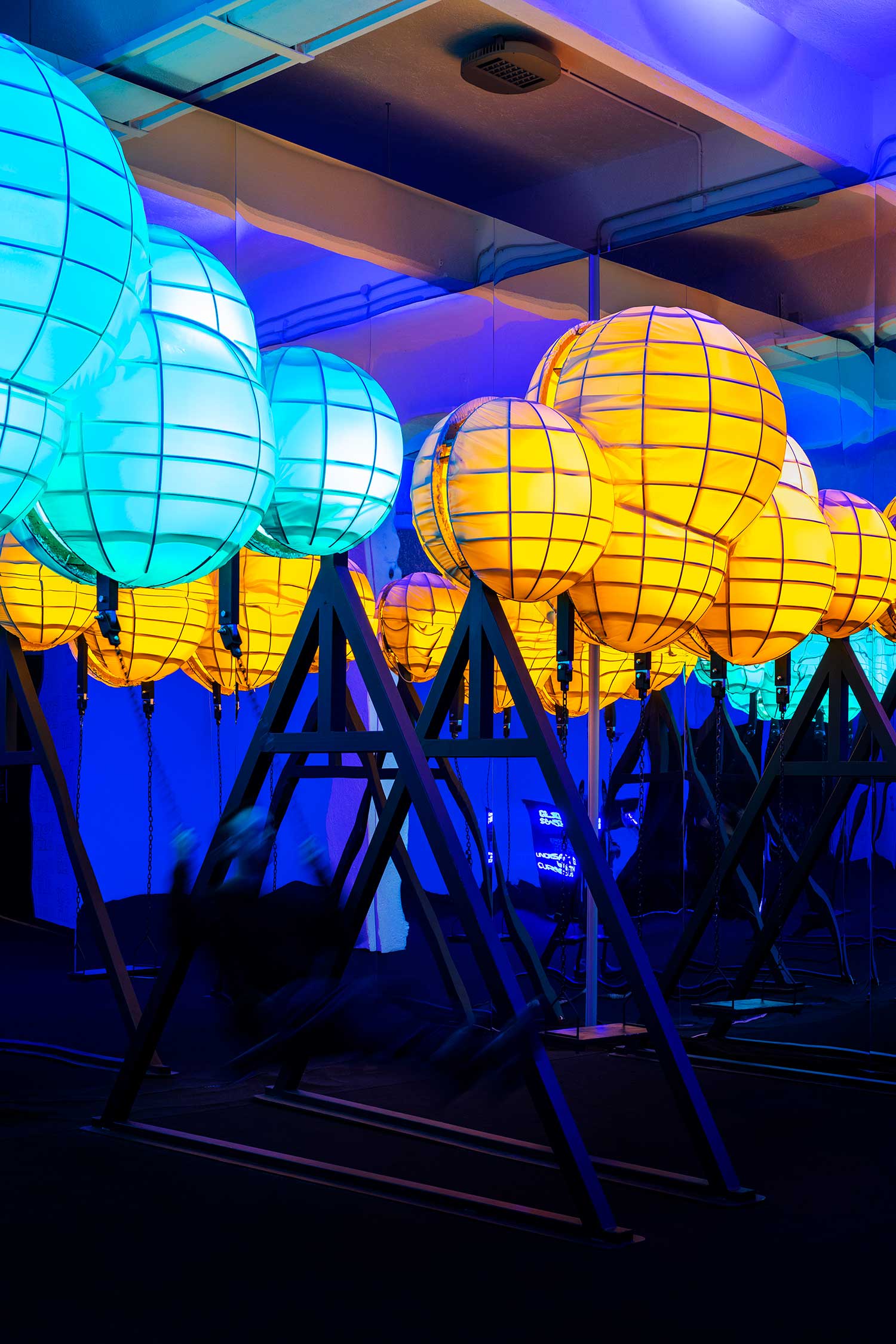 Everyday objects and their interaction with space are researched by Cyril Lancelin with Knot, a large knitted knot, the start and end of which are impossible to discern, and also by Geraldo Zamproni with Volatile Structure, consisting of large red cushions that seem to support the surrounding structure in a constant tension between content and context.

Cloud Swing by the US duo Lindsay Glatz with Curious Form consists of three suspended swings in a luminous cloud. The coloured lights provide a fairy-tale atmosphere and the direct experience inspires childhood recollections. 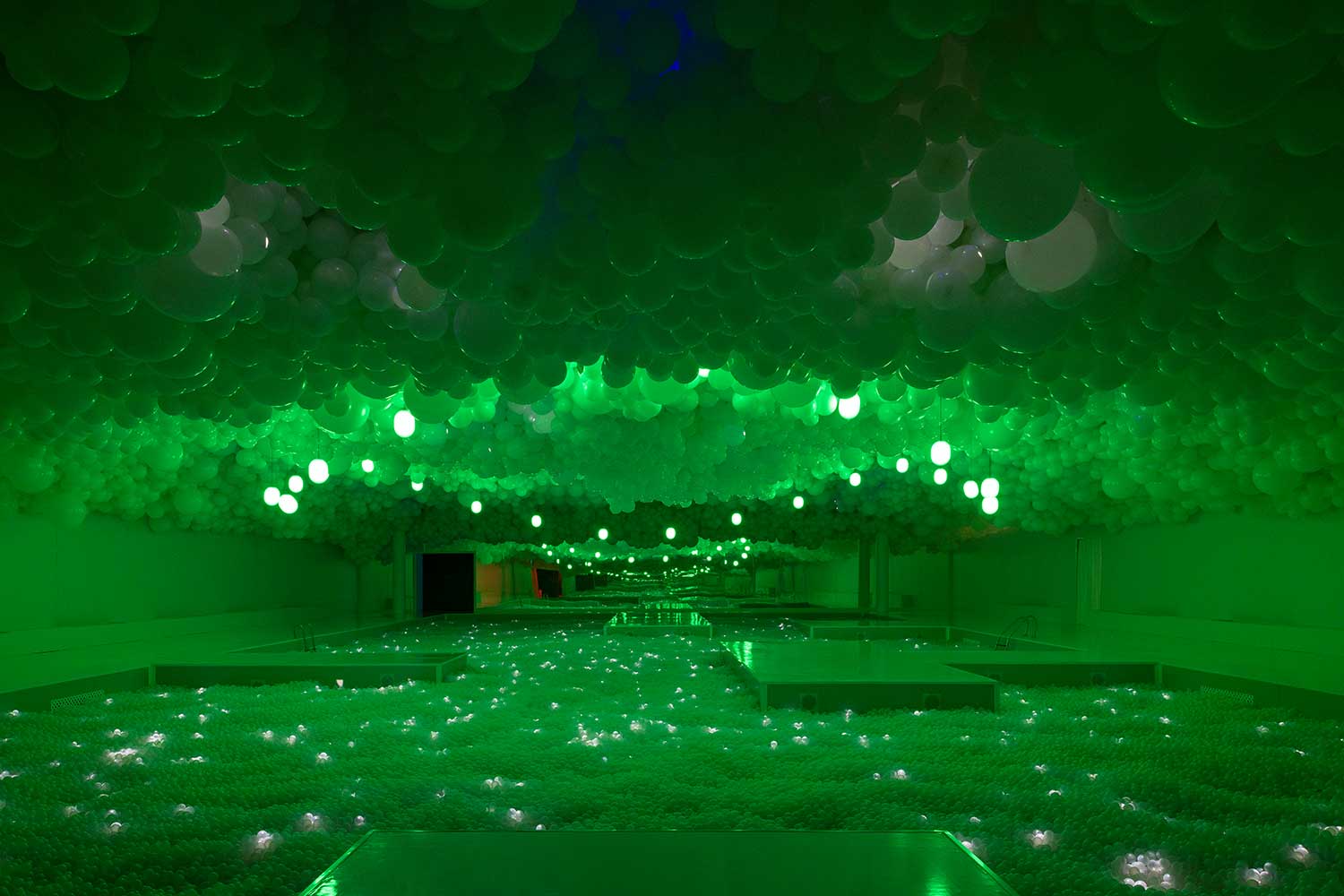 The study of nature and an observation of the equilibrium between chaos and immobility are the distinctive traits of the Hyperstudio art collective, who present Hypercosmo, and of the Quiet Ensemble duo who sign its multimedia performance and reveal A quiet storm. The installations are set in ambiences in which sea, sky and rain take on an unprecedented form.

A multiplied and psychedelic universe, wrapped in rarefied atmospheres, meets the spectator in Never-ending stories by Motorefisico, in which people’s perception of the surrounding location changes with their own movements. 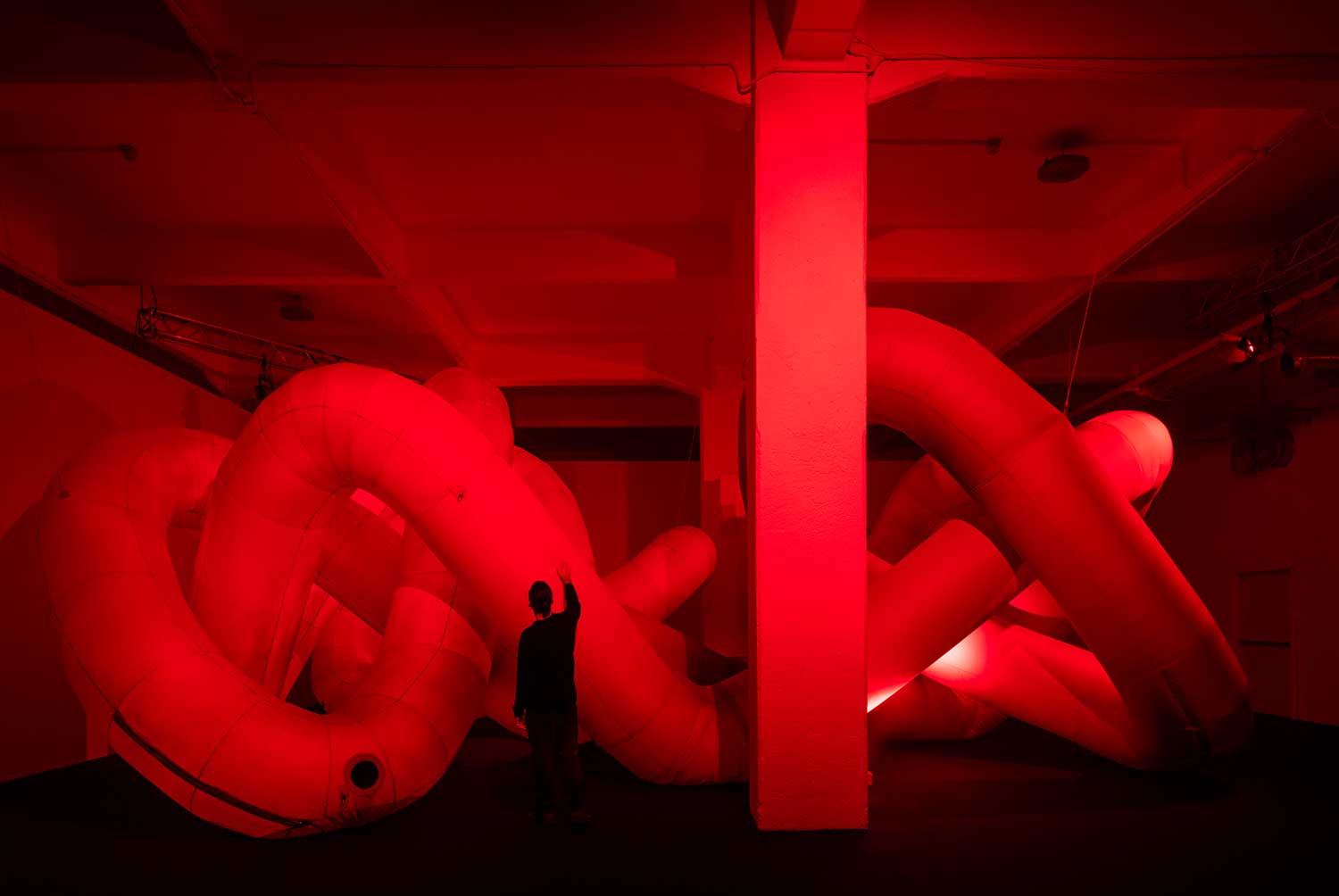 The interaction between people and space materialises with the site-specific work signed Giallo 368 by the Penique Productions collective, which occupies a large space and modifies its perception: a lightweight and colourful wrapper envelops the room and transforms it into a living architecture, animated by fan-generated air, causing a sensation of disorientation in the spectator. 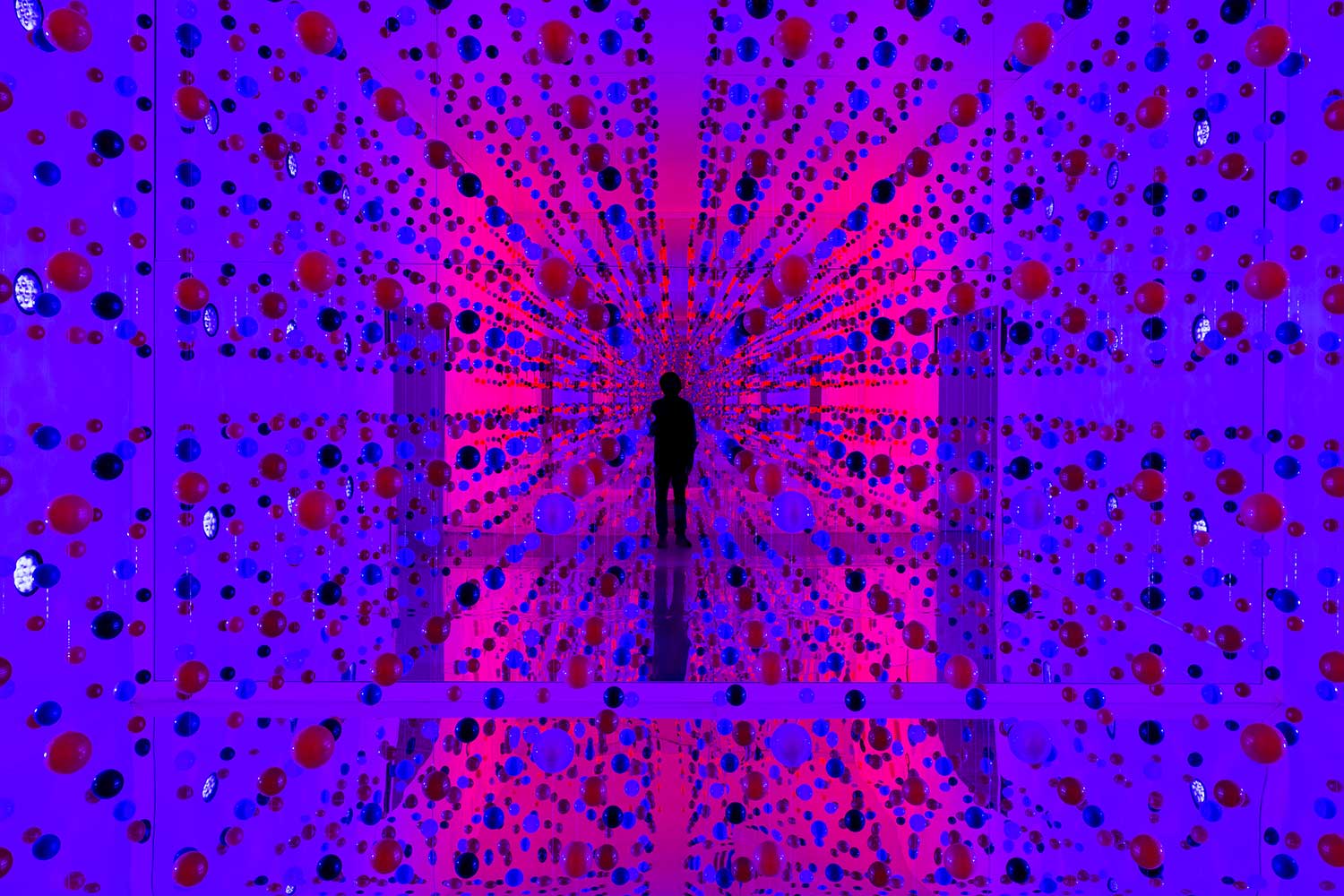 Aria, an immersive experience presented by Pepper’s Ghost, is a digital interpretation of inflatable art, in which the public find themselves surrounded by a multitude of fluctuating balloons and engaged in a metaphysical journey. The room is transformed into a boundless space thanks to an intense sound design reproducing the depth of a breath kilometres away, which creates truly unique sensations. 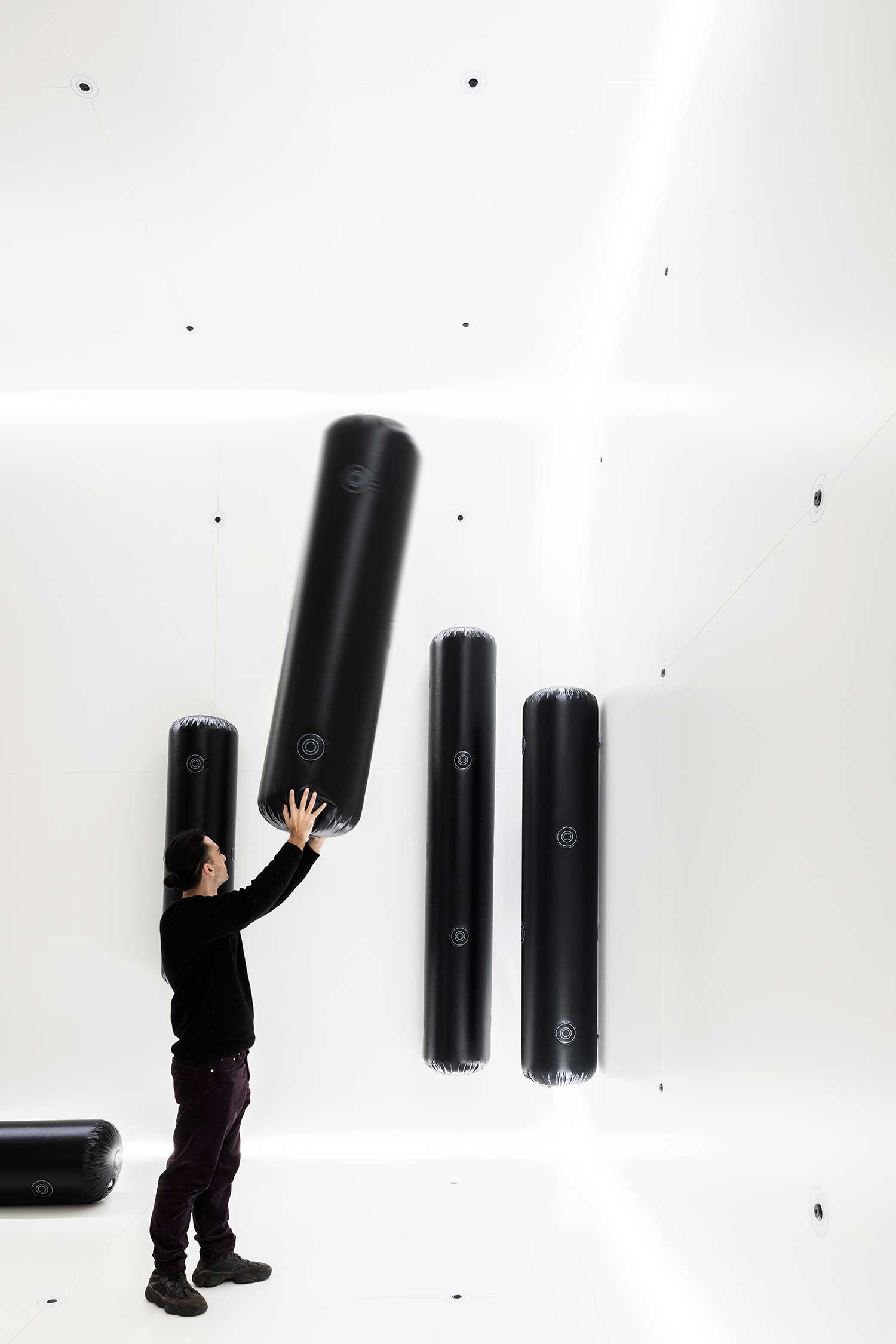 Inspired by neuroscientific discoveries regarding brain autoconfiguration, for the first time in the Superstudio space Karina Smigla-Bobinski presents Polyheadra, an interactive installation that triggers a direct dialogue with the public. Invited to take an active part in the construction of the artwork, the spectator can assemble inflatable tubes of various sizes in an infinite number of different ways and document the results of their efforts with photos and videos. 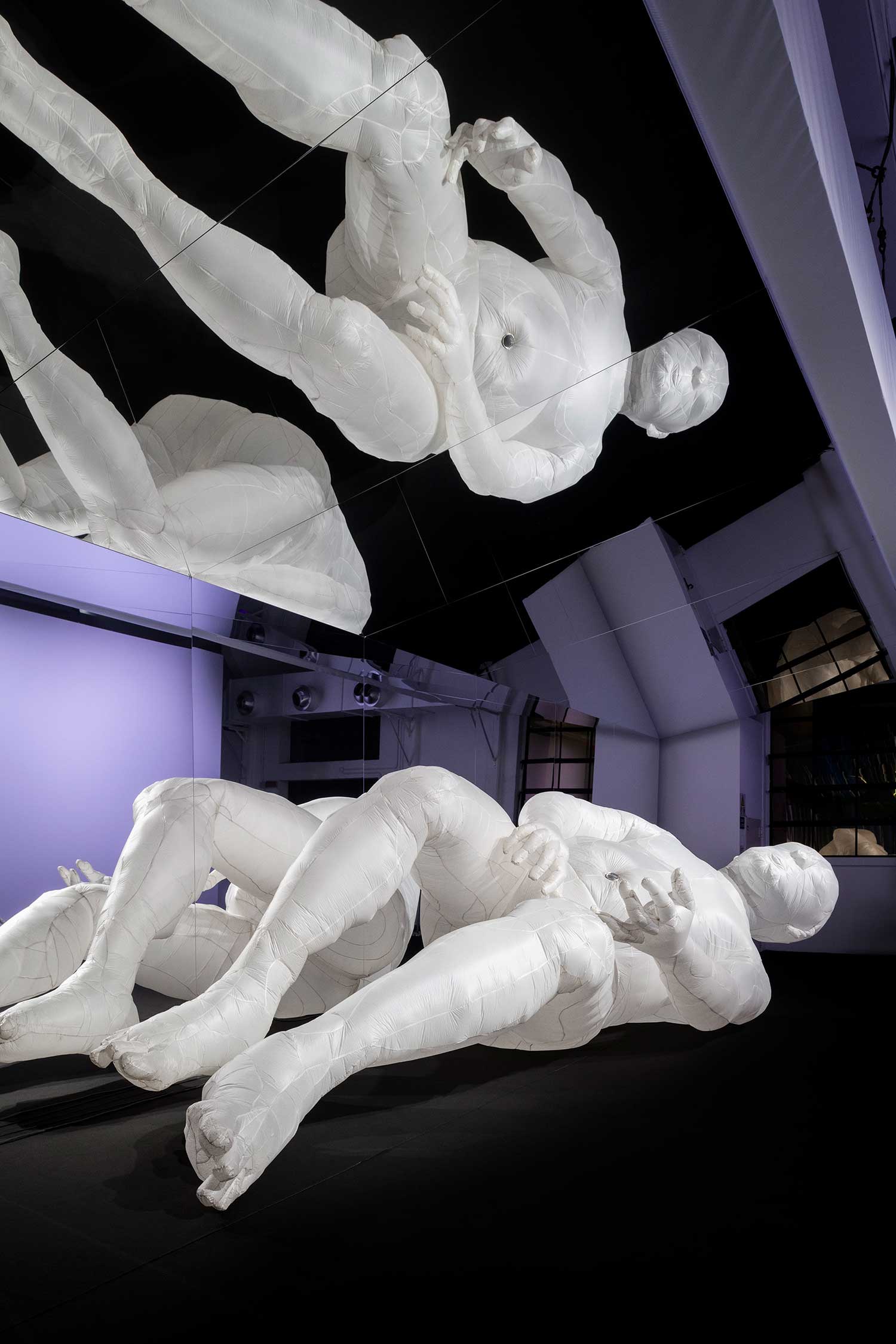 Canopy, the fruit of a collaboration between Studio Pneuhaus and Bike Powered Events, springs to life thanks to the intervention of the public. Consisting of a small wood of tree-like luminous sculptures in constant transformation, it lights up and expands when powered by the green energy produced by the participants with cycle-driven generators. 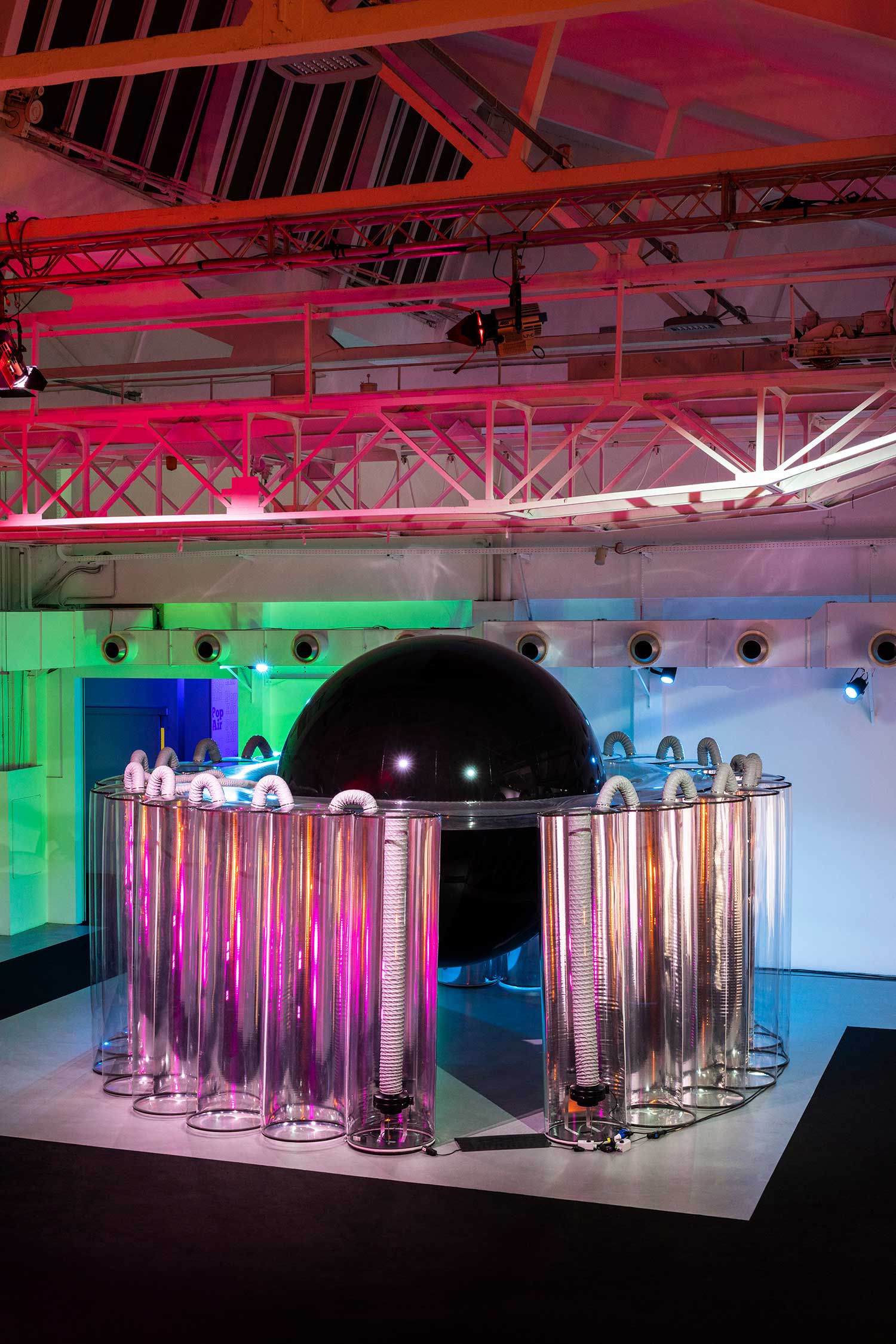 Air becomes an architectural element in Tholos by Plastique Fantastique, a tribute to ancient temples revisited in an inflatable key. This installation, whose world preview coincides with the exhibition, takes an ironic look at geometry and shapes as it reveals some unprecedented elements produced from transparent and reflective materials.

The Ginjos created by Rub Kandy are colourful and mysterious characters whose shapes evoke anthropomorphic figures.

Highly interactive ambiences of amazing design greet visitors along Balloon Street, in an experience, played out between pop-coloured works and ironic references. 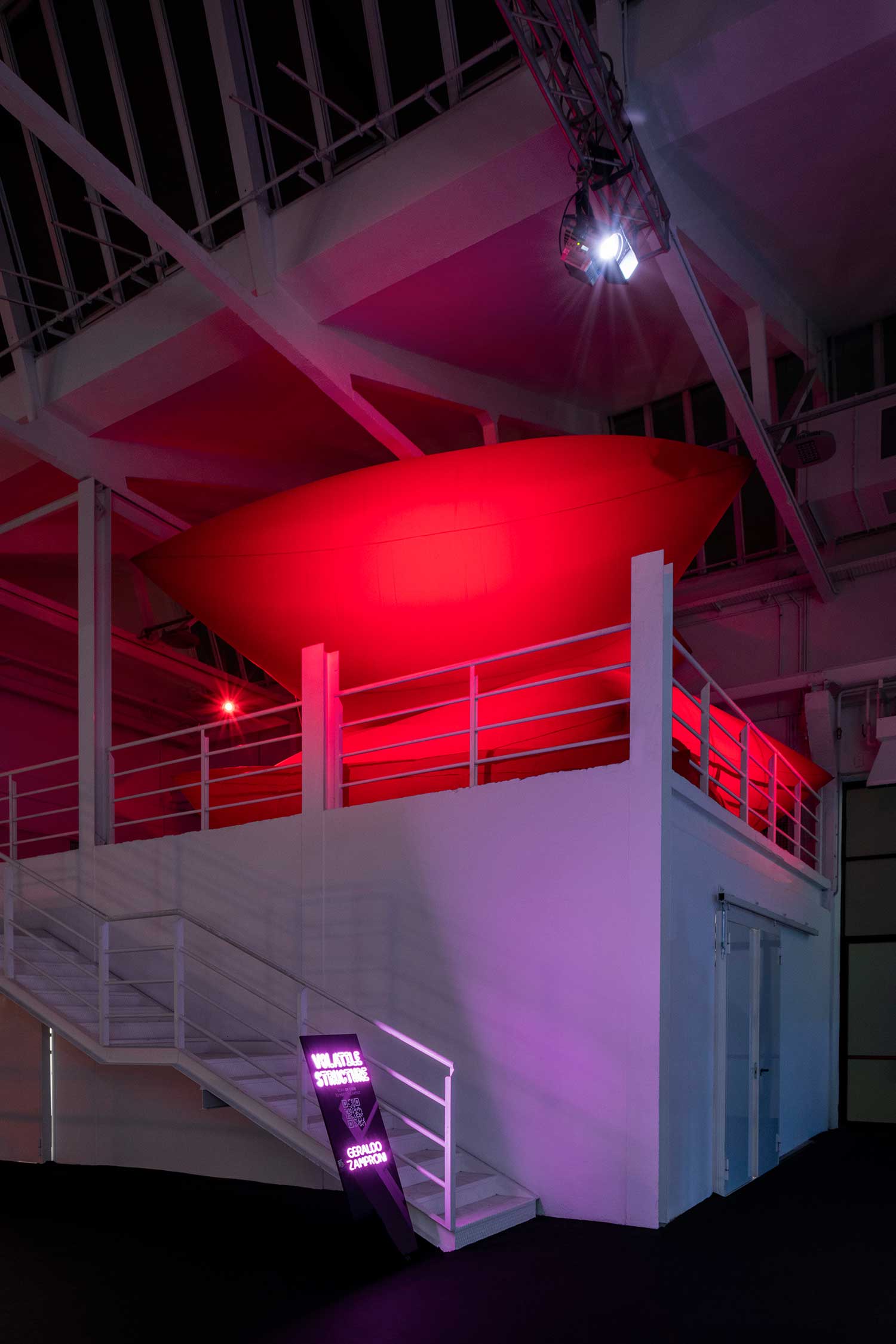