During the 2014-2015 Amsterdam Light Festival visitors can experience Amsterdam’s most sparkling street this winter: The Alley of Light. Dutch-based design offices Serge Schoemaker Architects in collaboration with Digiluce created this twelve-metre-long passage that is surrounded by a four-metre-high three-dimensional matrix of 2000 handmade lights.

The Alley of Light is an urban space defined by light. Recalling the typical narrow alleys of red and grey bricks in the historic centre of Amsterdam, this installation visualises the theme of this third annual light festival in Amsterdam, ‘A Bright City’, in a radical way. Open, dynamic and enchanting, this alley represents the best qualities that a contemporary city like Amsterdam has to offer. 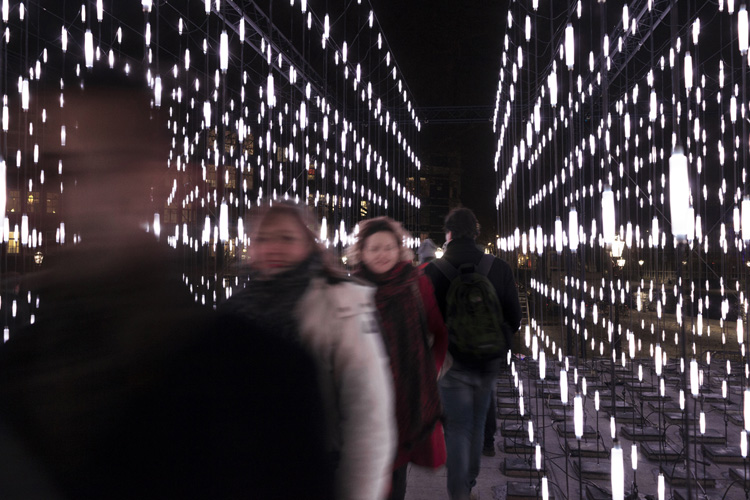 The architectural light installation consists of 320 vertical strings with six lights each, hanging in a black steel cage construction. The footprint of the installation measures 10 by 12 metres. It is placed on an existing platform on Jonas Daniël Meijerplein, which could be considered a stage for the design. As the installation rises one metre above ground level, visitors have to climb several steps to enter this sparkling world. 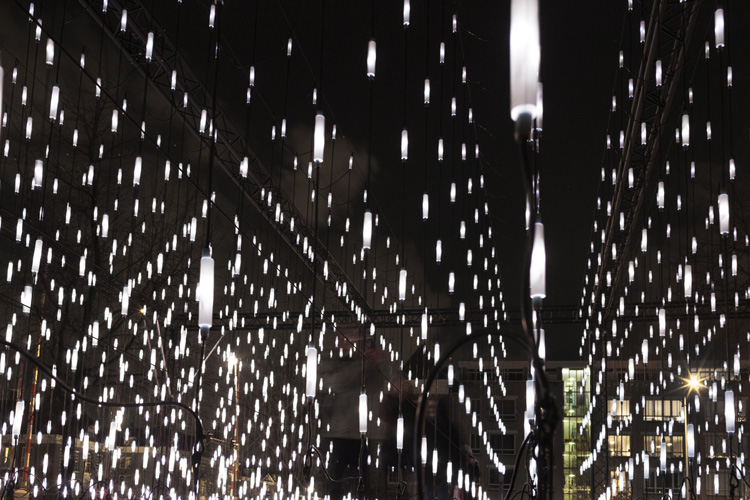 The atmosphere and sense of space within the twelve metre-long passage change continuously thanks to its programmed variation of light configurations that never repeats. The lights continuously change intensity. The wave-like motion of light within the installation generates a unique spatial experience: when all lights are lit, the passage appears enclosed and intimate; as soon as the lights dim, the space becomes fluid and the borders of the alley start to fade. 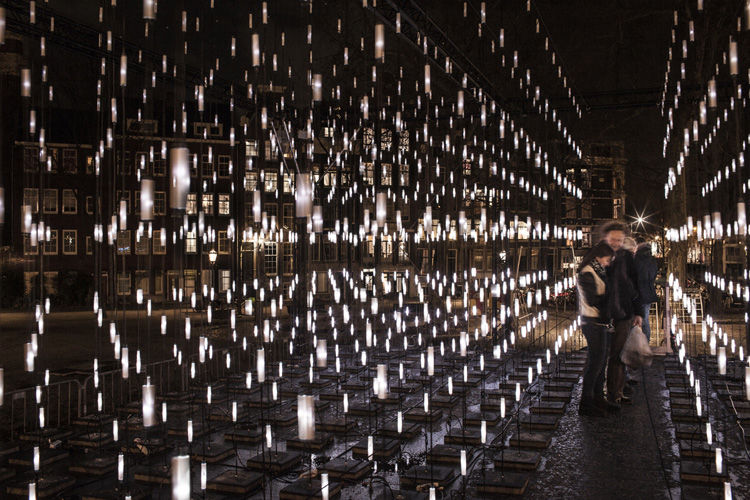 Alongside the internal experience, the installation is perceived externally as an eye-catching three-dimensional animation. The motion of light within the strong geometric shape of the matrix can be seen from afar and invites people to experience the installation from within. The algorithm that controls the individual lights and generates the wave-like motion through the grid, is inspired by and derived from the physics of underwater lighting effects. 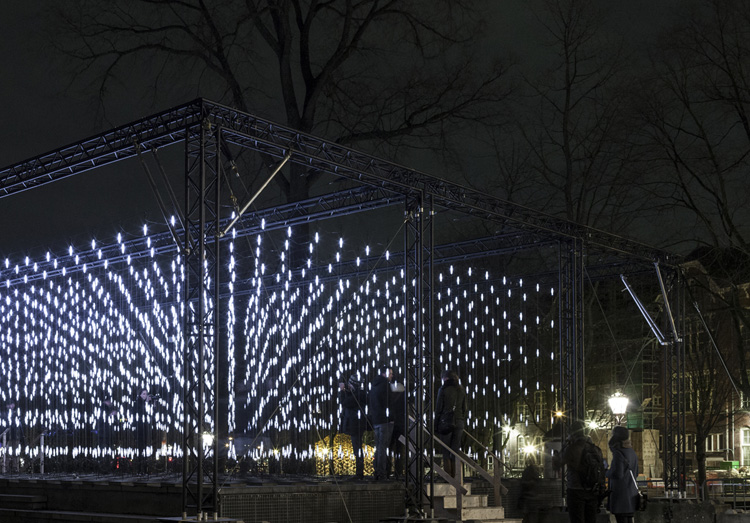 The individual lights are designed as abstract vertical lines. Each handmade light consists of two LEDs enclosed by an acrylic tube. The tubes are covered with white paper and sealed with heat shrink tubes. Next to the nearly 2000 lights, the installation consists of one-and-a-half kilometres of cabling. 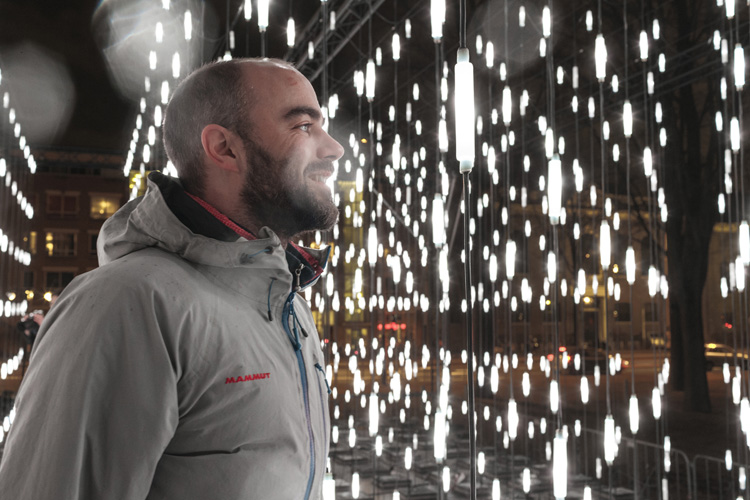 During the Amsterdam Light Festival the Alley of Light is located in the historic centre of Amsterdam on Jonas Daniël Meijerplein, between the Jewish Historical Museum and the Portuguese-Israeli Synagogue. It runs until 4 January 2015. Open daily from 5 until 10 pm. 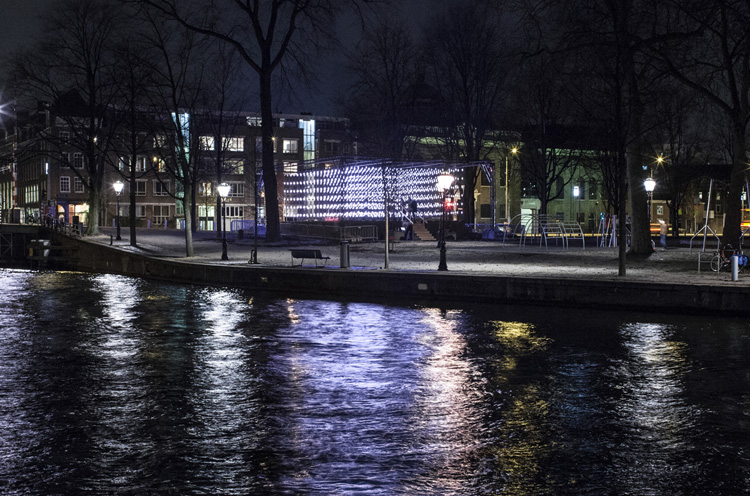 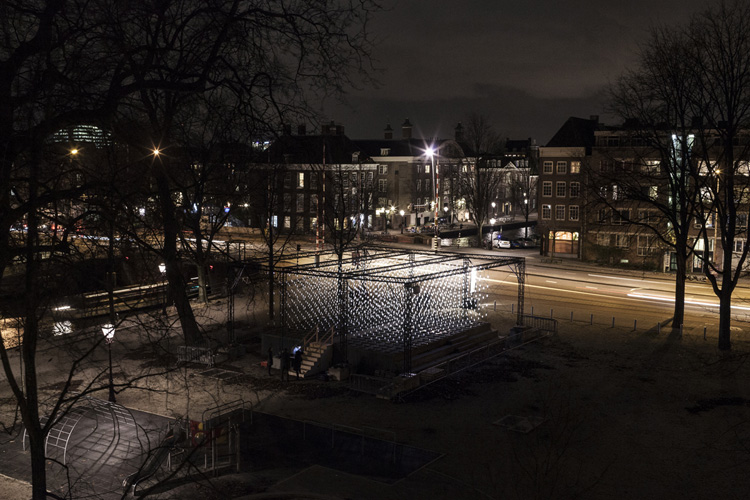