Canadian studio Uufie has realized a new Art Deco-inspired atrium spanning across the floors of Printemps iconic department store in Paris. Printemps, named after the season of Spring, is a renowned department store located on Boulevard Haussmann. It was founded in 1865 by Jules Jaluzot and Jean-Alfred Duclos. Through its long history, Printemps has continued to revolutionize the ways of shopping. It was the first department store to use electricity, elevator lifts and introduced modernize architectural feats such as a massive spiral staircase and a 42-meter high dome. Over the years, several reconstruction projects had to take place to rebuild from disastrous fires, and many of its original architectural features were removed. Although, in 1972, the grandson of the founder was able to reinstall the great dome. Since then, both the Art Nouveau style dome and facade are registered as historic monuments. 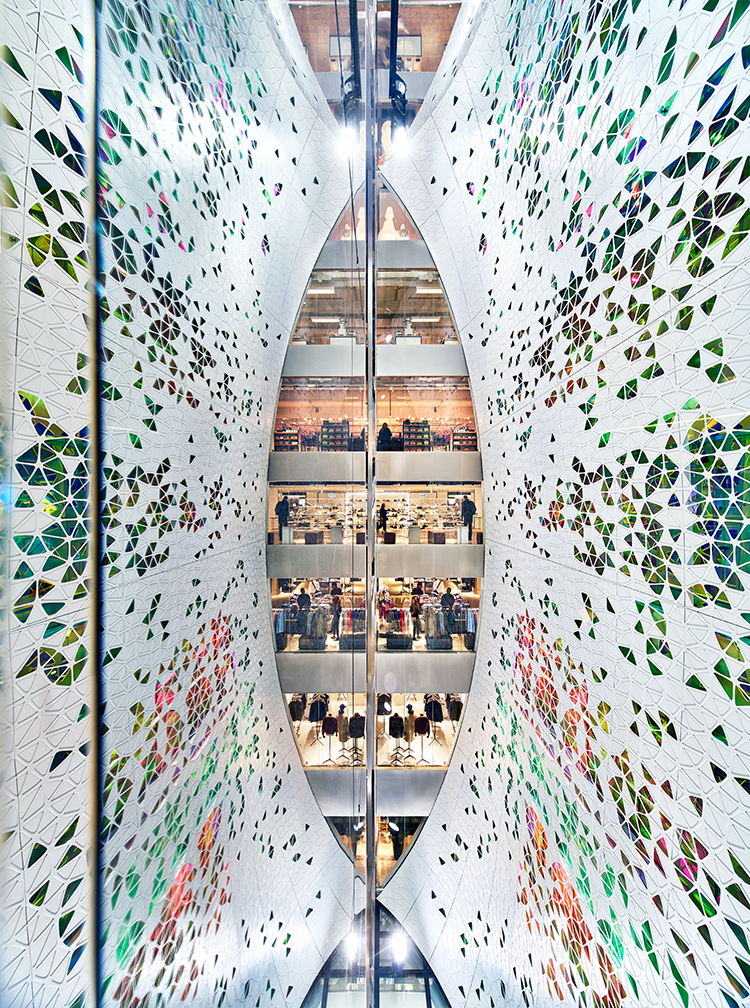 As part of today’s reconstruction of Printemps, the objective was to introduce a new atrium that would allow visitors to see all levels. As a result, facilitating vertical movement and creating a landmark that would be compliant the quality of the establishment. In January 2017, a new space that stretches vertically from the lower ground floor up to the 9th floor was realized. 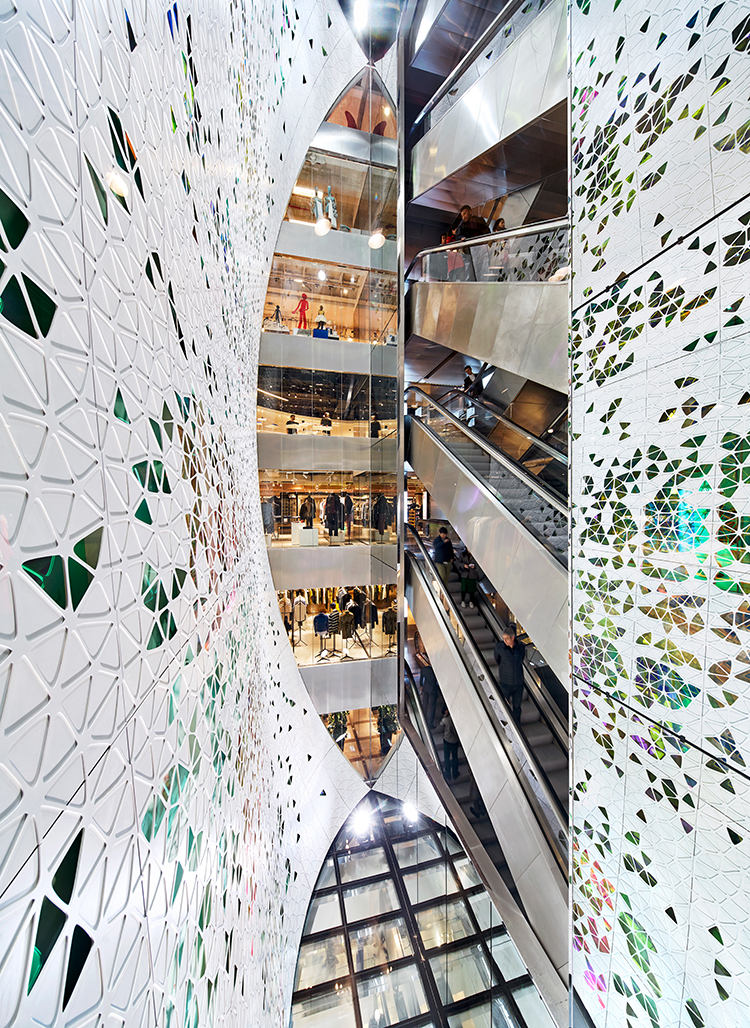 To do this, a concept of a vertical dome, also called a veil, penetrates the heart of the building. It is reminiscent and a homage to the store’s iconic stained glass domes seen in 1894. The veil weighs 24 tons, but appears to float in front of the vertical circulation with a glass floor and mirror ceiling. It is 25.5 meters high and 12.5 meters wide, consisting of white-painted aluminum panels perforated with approximately 17,200 petal-shaped openings that reveal a layer of Dichroic glass. The Dichroic glass changes colors based on people’s angle of view which gives an iridescent quality. The floral relief created by two layers of aluminum surface is an interpretation of images found in the historic stained glass. Transposed into a repetitive pattern that is then randomized to form the burst of colors on the white surface.

The geometry of the veil is conceived by connecting the four corners of the void with simple curves in plan and elevation. A combination of two-dimensional curved panels gives the overall shape to the full veil. A precise assembly allowed for the perfect control of joints between each panel. On the opposite side of the veil is a one-way mirror wall that conceals twelve newly installed escalators. It creates a reflection that completes the symmetry of the veil and gives the appearance of a widened void. 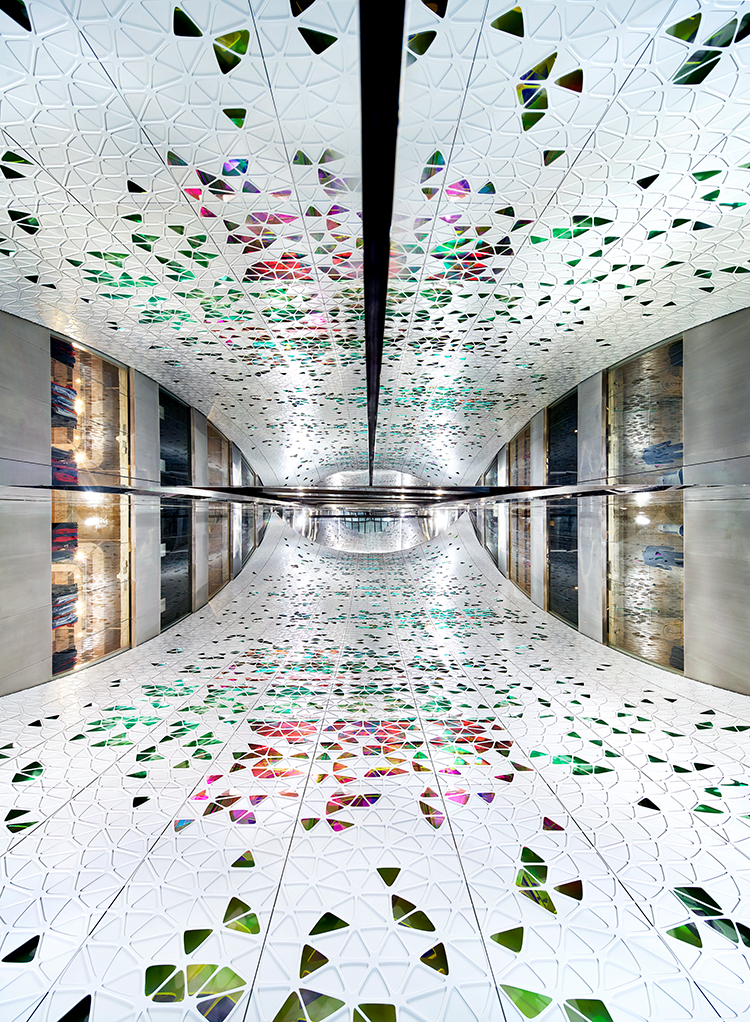 Visitors approach the space through a darkened vestibule leading to the escalators behind the one-way mirror. Between 4th-8th floors, an opening in the one-way mirror wall gives an unobstructed view of the veil. The progression through the spaces gives varying perspective and moments to experience the ever-changing play of light and color in the void. Acting as the backbone of the main building, it channels the energy to the different retail concepts on each floor and brings part of the building’s history to the present.

To negotiate the constraints of the existing building and strict fire regulation, resulted in a space that is symbolic and expressive of ingenuity in architecture and engineering. The entire project was constructed in only eight months while the stores were able to remain in operation. 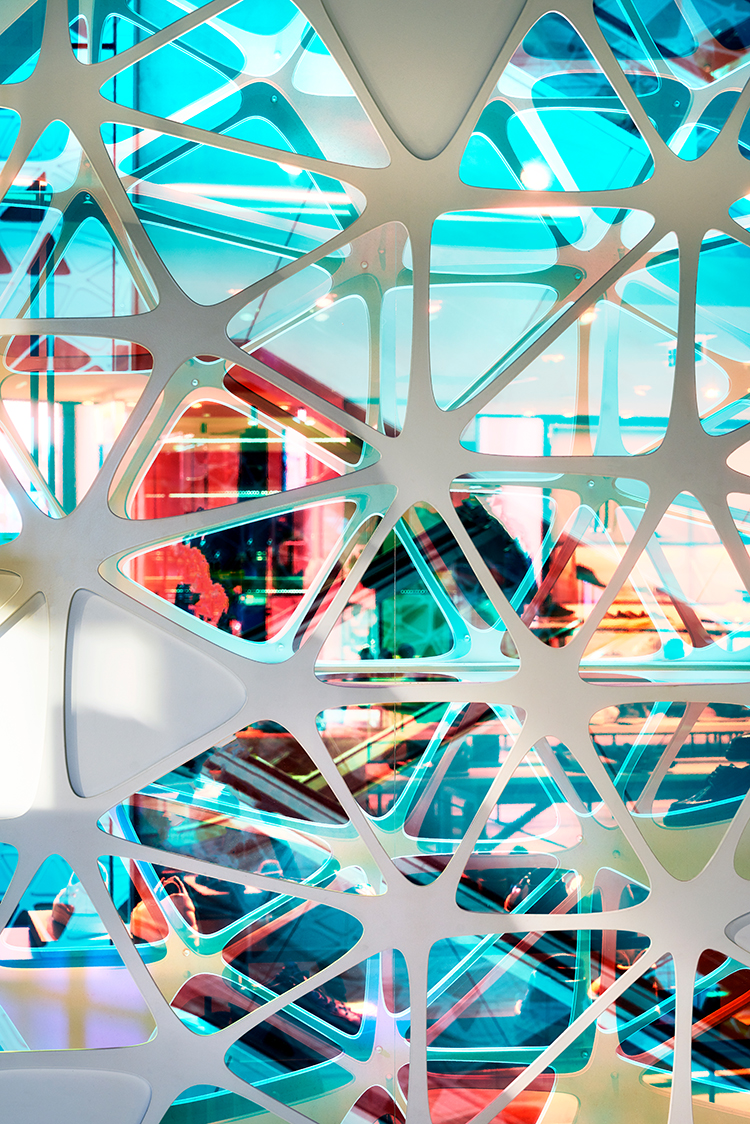 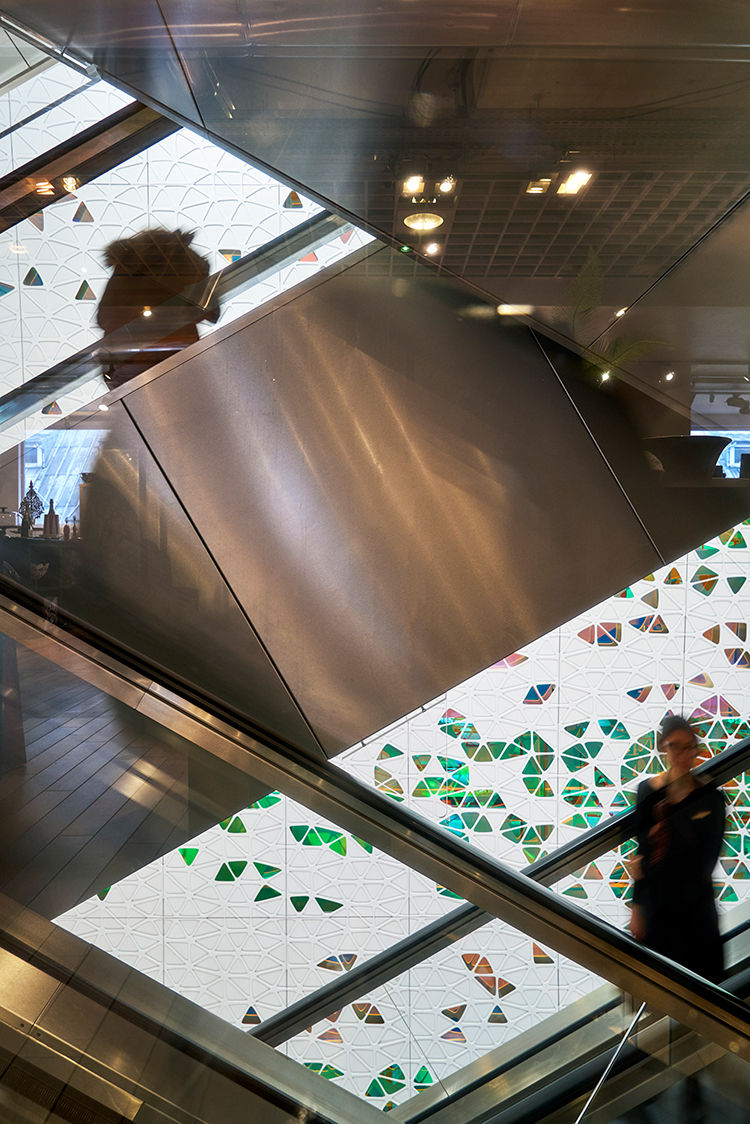 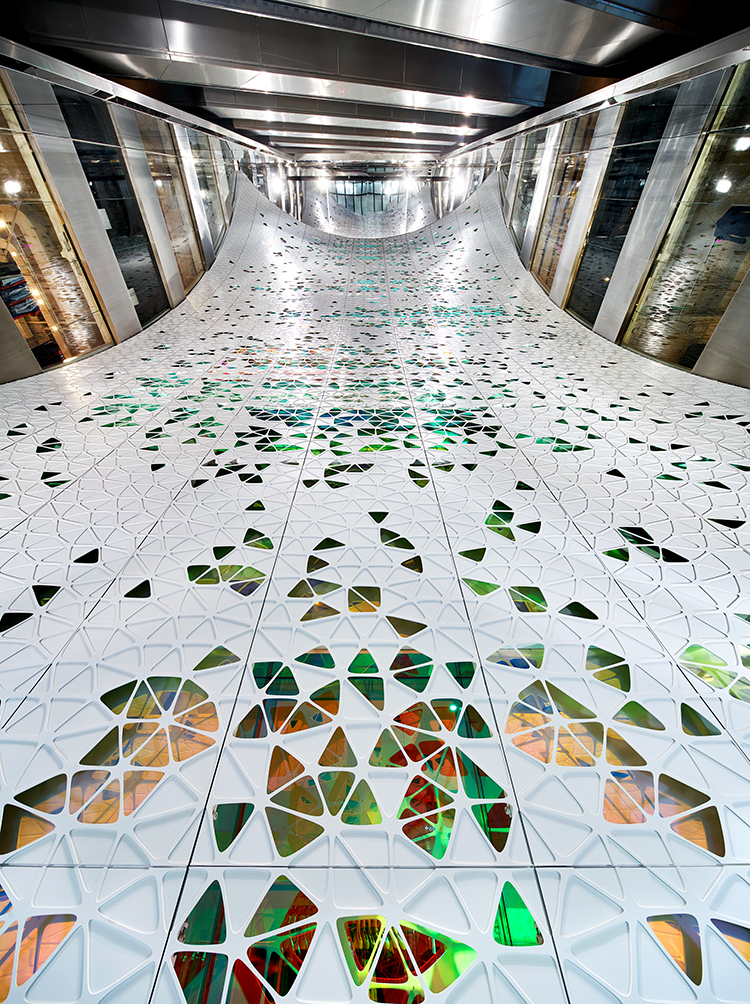