London-based Gilles Retsin Architecture has completed an experimental pavilion in Tallinn, Estonia, using Lego-like building blocks made of plywood. The Tallinn Architecture Biennale 2017 organized an international open two-stage competition, challenging participants to develop creative designs for a temporary outdoor installation, making innovative use of the fabrication capacities of the Estonian wooden house manufacturers. The call raised wide international interest, 200 portfolios were submitted for the first round from all over the world. 16 works were selected for the second round by the jury. Gilles Retsin Architecture was selected as winner, with a proposal that jury member Martin Tamke describes as “ characterized by outstanding aesthetic and intellectually challenging, as it questions current beliefs and trends in architecture”. 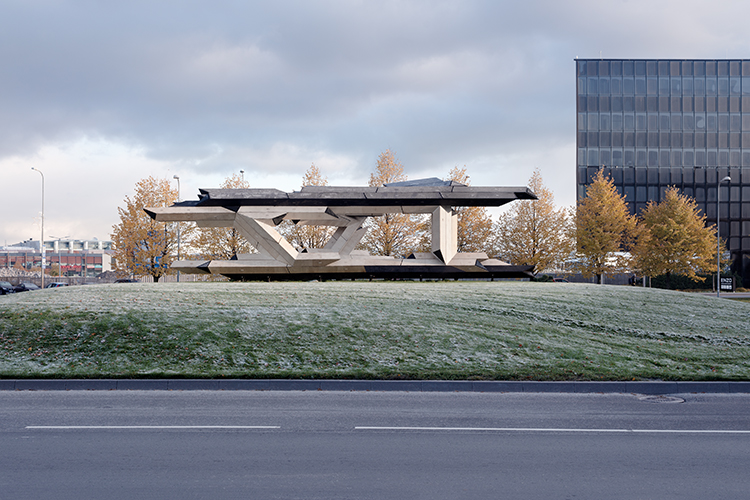 The traditional construction industry makes on average use of more than 7000 different parts. This results in a complicated production chain, making building slow, expensive and inaccessible for the many. What if we could radically reduce that number ? The TAB 2017 pavilion is based on a just a few, lego-like pieces that can act as both column, beam and cladding at the same time.

The past decade has seen an explosion of parametric pavilion structures, built by architecture schools, research institutes and enthusiasts. These so-called “parametric pavilions” are remarkably similar: they are almost always based on a surface or shell, that is then split into thousands of different pieces and then painstakingly re-assembled into the desired form. 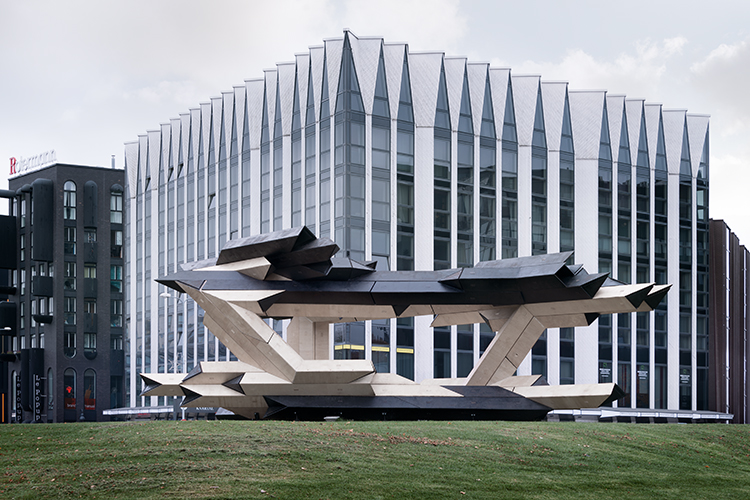 This proposal is critical of this approach and instead proposes to create a series of discrete building blocks, that similar to LEGO, can be assembled into a variety of structures. These building blocks are based on cheap, off-standard sheets of 18mm exterior plywood (3.3 x 1.35 m) which were locally available. Each sheet is cut by a CNC-machine, and can then be assembled into a stiff building block capable of bearing structural loads. The blocks exist as a family of straight,45 degrees, 90 degrees and 135 degrees elements. These building blocks are designed to perform “just good enough” in any structural condition: under compression, tension, as a cantilever or as a column. The blocks are protected from the exterior climate with black bitumen tar or varnish. Over 380 m2 of plywood was cut and assembled into 80 building blocks. The entire structure was fabricated locally in Tallinn, in collaboration with local manufacturers. 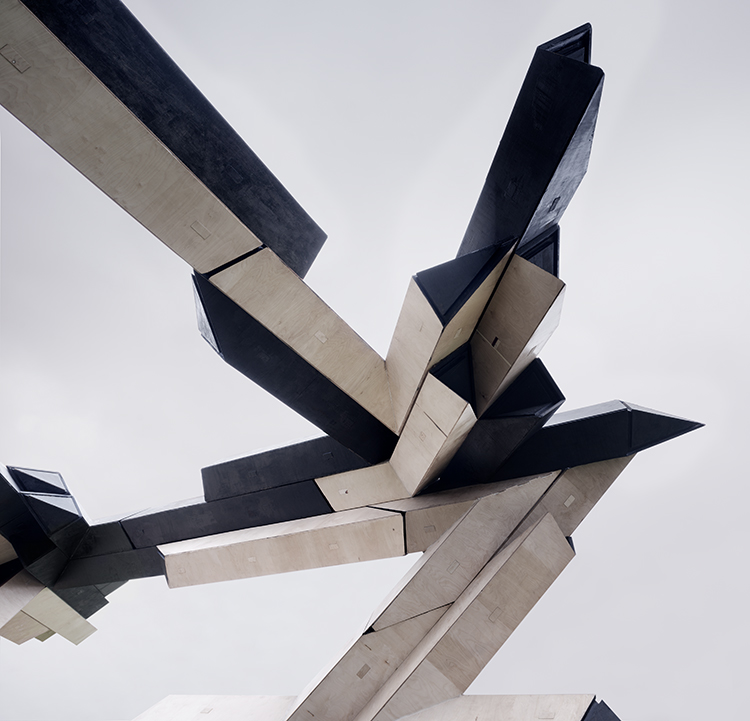 Similar to a brick-bond, these discrete building blocks can be combined together into a staggered pattern, able to produce large beams and spans. The connection is based on off-the-shelf threaded rods, used in suspended ceilings or to hang cable gutters. These rods connect through several pieces, forming a stiff structure under tension. 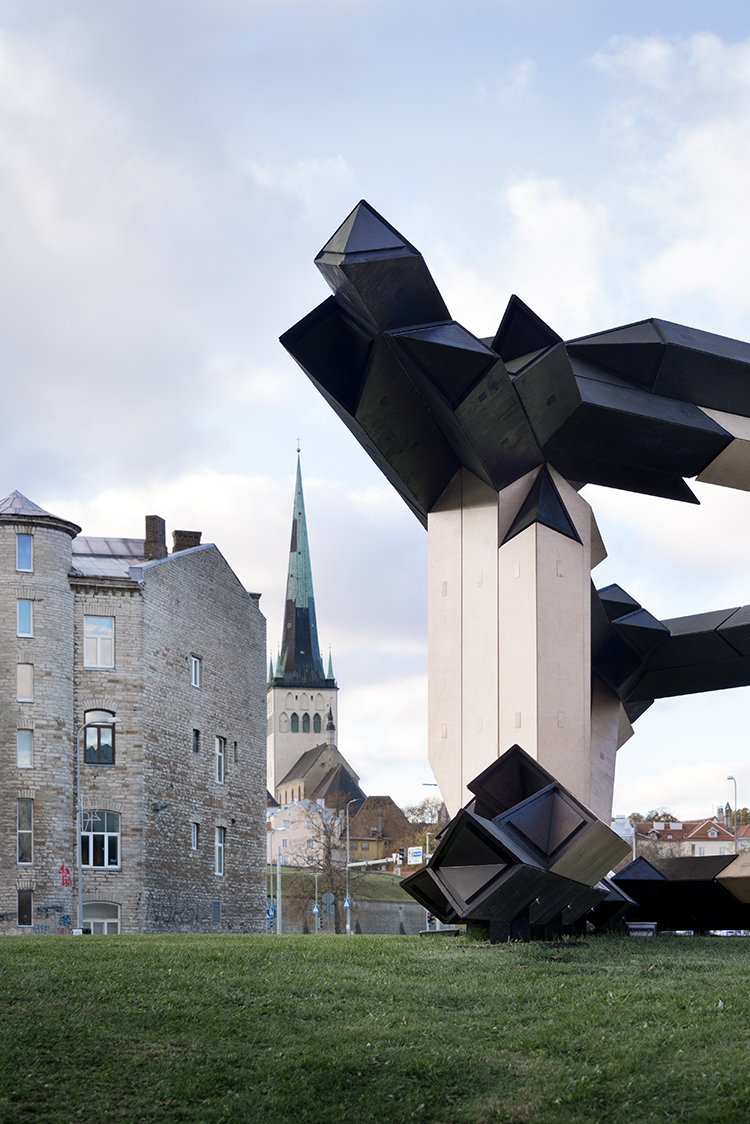 The blocks can be quickly assembled on site, using only a set of ratchet-spanners and bolts. The assembly remains reversible, it can be modified or taken apart afterwards. The whole pavilion, covering an area of 75 m2 was assembled in just 4 days by a crew of 4 people, without any mechanical tools such as a crane or lift. The pavilion is materially and structurally efficient: the overall weight of the pavilion is only 2 tons, while it can support local loads of four people and can be extended with a roof. Using only 18mm thin plywood, cantilevers of up to 4m and are achieved. 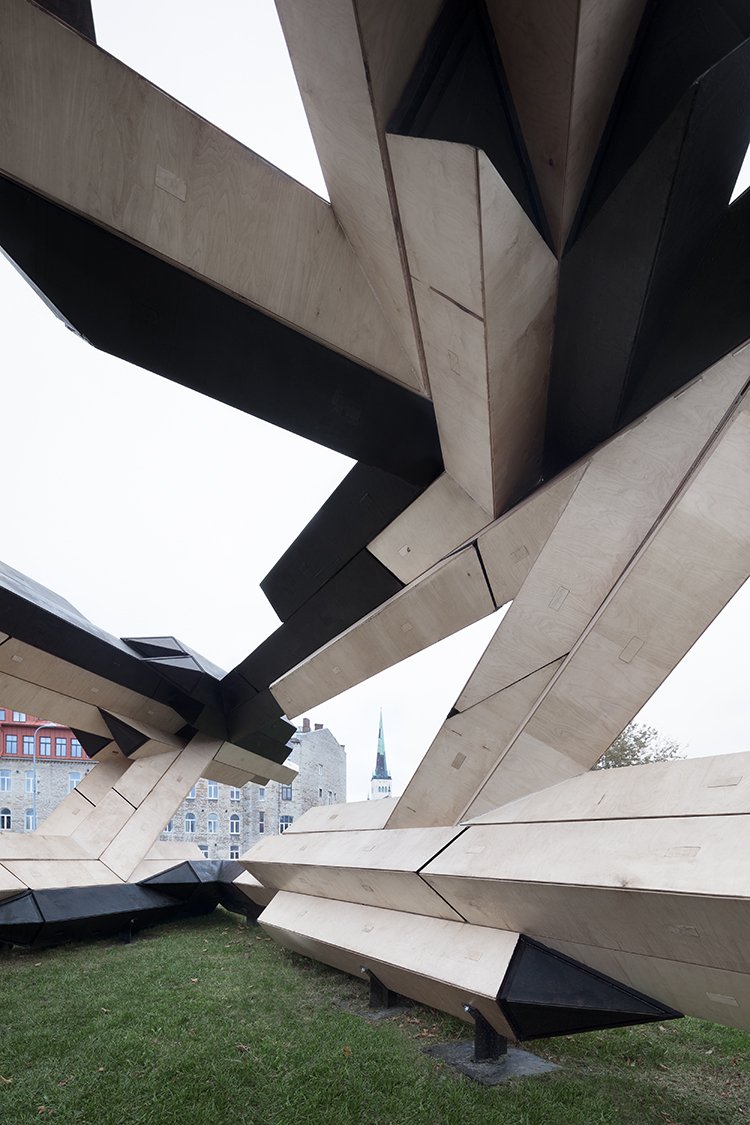 The pavilion is more a case-study or prototype of a construction system rather than a finished form. In that sense it’s similar to Le Corbusier’s Maison Domino: an abstract model of a larger, recombinable and repeatable construction system. In contrast to the typical shell or surface-like parametric pavilions, this pavilion wants to be understood as a part of a larger whole, a unit in a mass-housing system. The horizontal organisation hints at the fact that it could be stacked and repeated in multiple directions. The pavilion is never finished: it remains an open and adaptable whole. The structure could be finished with a roof or facade and continue it’s life afterwards as a cabin, pedestrian bridge or house on another location. 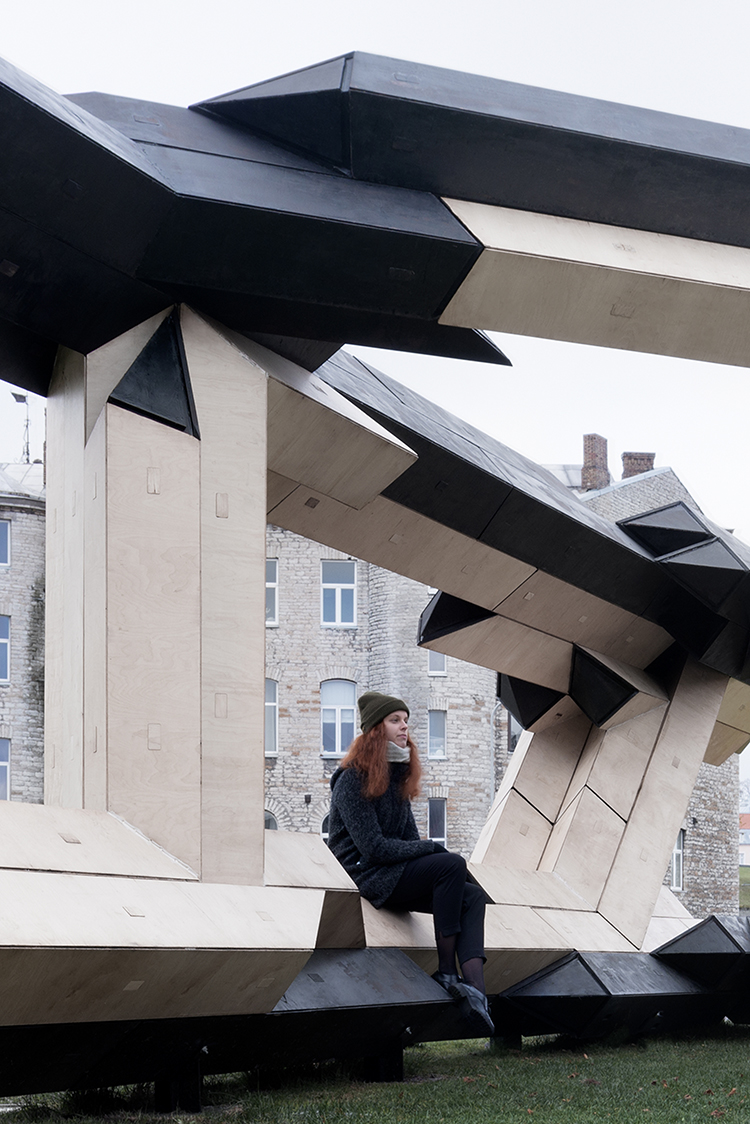 The digital workflow behind the pavilion enables a low-cost, fast and open production-chain. With the help of digital fabrication tools, an initially weak material is turned into a versatile and structural building block that can be assembled by anyone, with almost no tools. This construction method is scalable and could be applied for housing solutions on a larger scale using stronger materials such as CLT (Cross Laminated Timber) or LVL (Laminated Veneer Lumber).