Atmos Studio has completed a  monumental staircase made from laminated oak that weaves as the centerpiece of the Oliver Dabbous’s recently opened 3-storey HIDE restaurant in Mayfair, London. The stair’s design creates a plant-like structure that grows like an irrepressible life-force from beneath, bursting from the shadows of the basement towards the daylight above.

It twists upwards, spiralling energetically like a corkscrew, steps unfurling seamlessly from the structural stem-like leaves, while further branches similarly delaminate to form a delicate wavy balustrade guiding the guests carefully upwards. “StairStalk” finally unfurls at the 1st floor level, as if reuniting with its vast family of arboreal brethren in Green Park opposite – nestling just beyond the full-height panoramic glazing fronting Piccadilly. 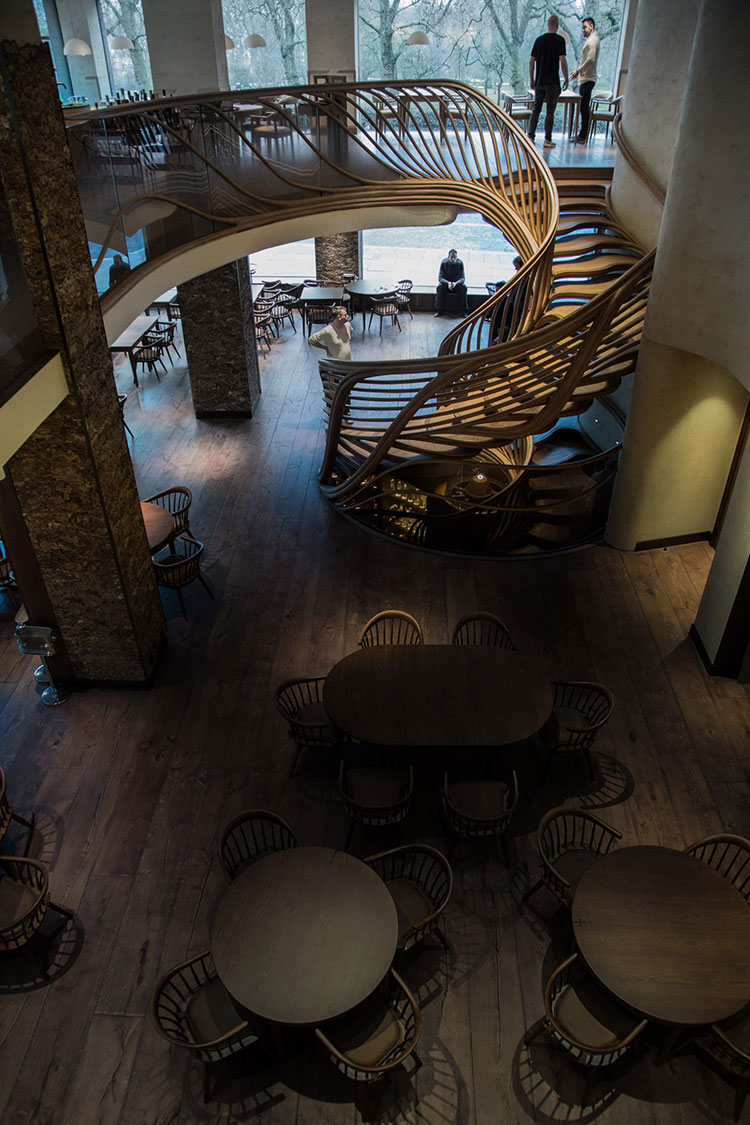 Like a wild plant pulsing insistently upwards and outwards between the comparatively restrained geometry of its surrounding architecture, it at last comes to rest once its conveyancing role is accomplished, merging gently into the walls that contain it. Its entire surface is made of laminated Oak, like a green plant grown woody with age, thus naturalising amidst the restaurant’s family of wider oak furniture. 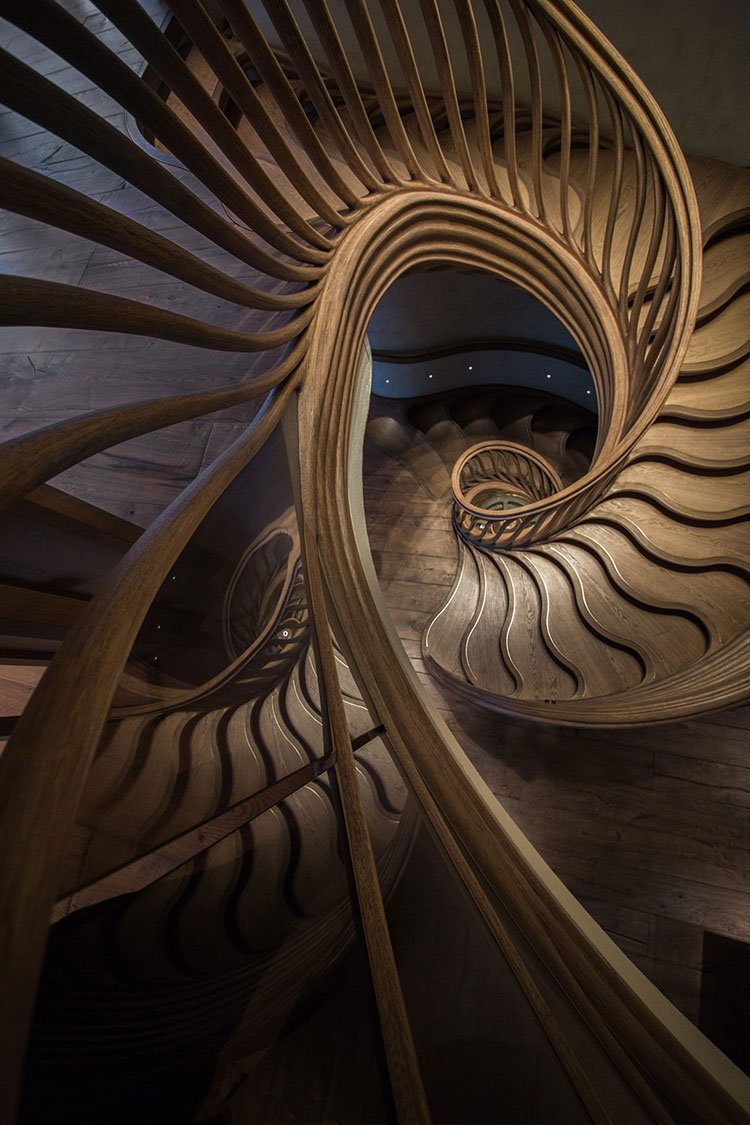 The main structure was layered from glued slices of thin oak veneer, laid and laminated together against curved moulds and then hand-sanded into shape to form an elaborately-curving timber structure whose visible grain magically follows its path. This structure then encapsulates the thicker slabs of more familiar wide- oak floorboards forming the upper and lower surface of each tread, thus echoing the fields of parallel oak floorboards at the uppermost treads of each flight. 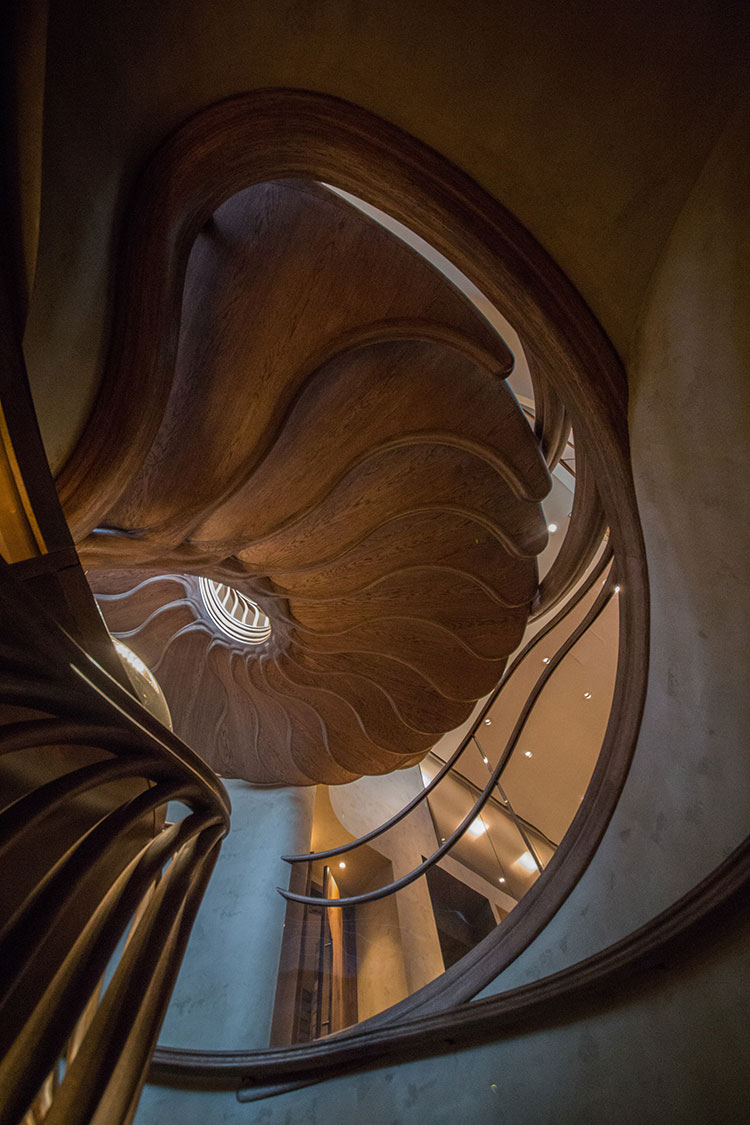 The evolving design took its cue from the natural palette, playful imagination, and powerful aesthetic developed by both the interior designer and the project client. This love of nature is further echoed in Ollie Dabbous’s showcasing of natural ingredients; his reinvention of familiar vegetables; even the stunning culinary presentation of delicately curling leaves and petals and other botanicals. 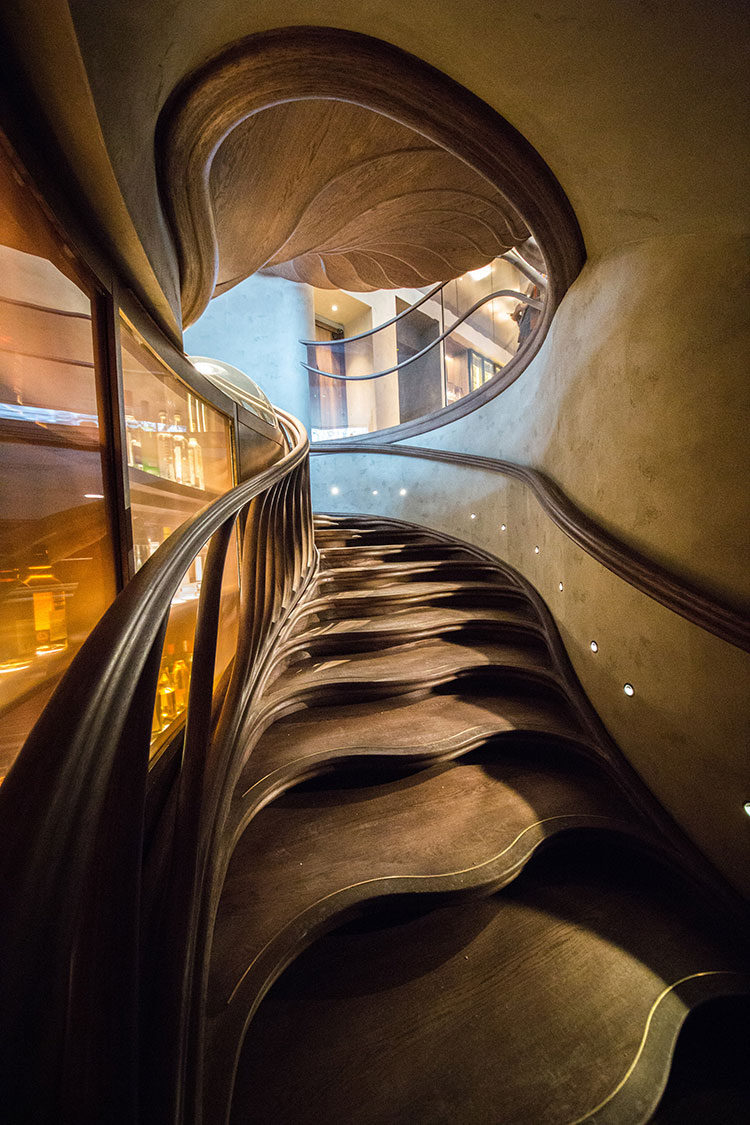 Another crucial influence was more mystical and whimsical and relates to the perceived magic that underpins all nature – especially the world of childhood fairy-tales, in whose fertile soils the stair first took root. The stair begins in the basement as a simple concave step, indented to invite the user into its folds, which then curl back to mould into the surrounding fibres of the stringers trammelling it either side as they travel along the enclosing walls either side.

From there the central indent flips to become an increasingly protruding curve whose sequence aggregates to imply a central speedier ridge that the speedier guests can quickly ascend, while the remaining indented valleys either side offer calmer, slower journeys. 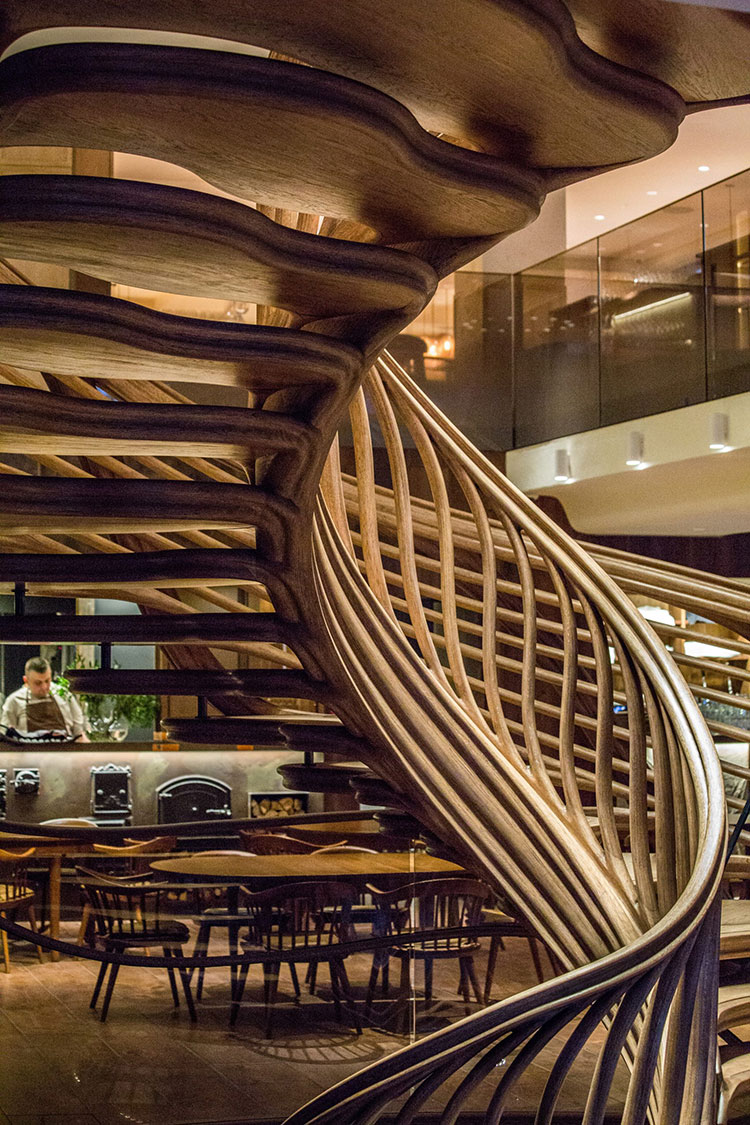 The stair glides along a glazed bar wall to its left, glowing with the amber glow of sophisticate alcohols, until this cedes at the spiral’s centre to a circular glass-domed beer-hop rummager, specially commissioned as a hand-turned cast-iron set of cogs that reference the distilling process – and enable the barman to rotate and access the bottles within. On its other side, the wall flanking the hidden lift undulated and protruded to magnetically inflect the stair geometry, just as both ceiling edges meeting the stair also undulated to respectfully meet it. StairStalk then lifts free of the bar wall below and its inner stringer ascends as a free-floating structural element, bearing the full weight of the entire stair structure until it docks with the mezzanine floor above. 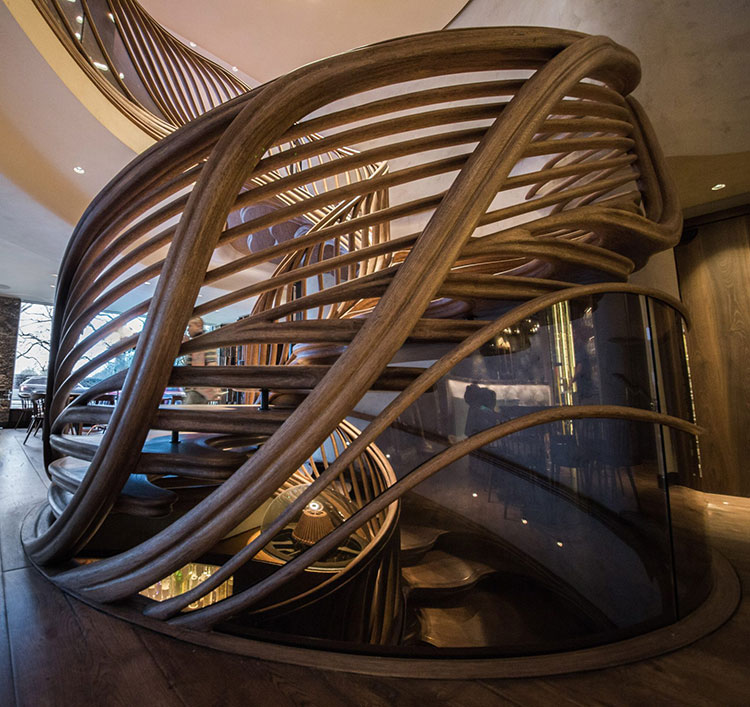 The inner balustrade split where it hits the ground level to form a fibrous offshoot that encircles the stair void, bifurcating to continue upwards as the main stair stem, but also unwrapping to form the front nosing of the tread just one step up, which in turn further bifurcates to not only wrap around the edge of this 1st floating tread (eventually blending back into the stringer from which it sprung, its fibres morphing perfectly with the ridges of its underside), but also then rising as a robust thick strand which eventually forms the outer handrail, gliding upwards before wrapping around the wall towards the lift. The tread geometries were assembled from pure arcs, conjoined tangentially and seamlessly at their tips, for simplicity of transcribing drawings into fabricated elements. 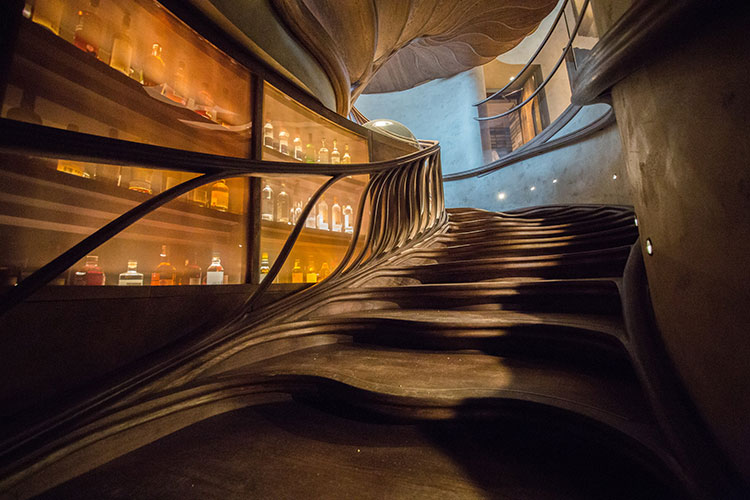 The oak was slightly darkened using natural stains and oils to help reveal its grain, brushed on thicker and more richly at areas of desired contrast, which also helps facilitate optical navigation of the staircase’s heady forms. The concealed metalcore, structurally required to enable the stair to float upwards free from constraint at the walls, is implicitly allowed to shimmer through briefly at the front nosings, as if like sap between a tree’s bark, flashing a golden strip of thin brass plate that wraps along the grain and provides a slightly raised texture to assure greater foothold. 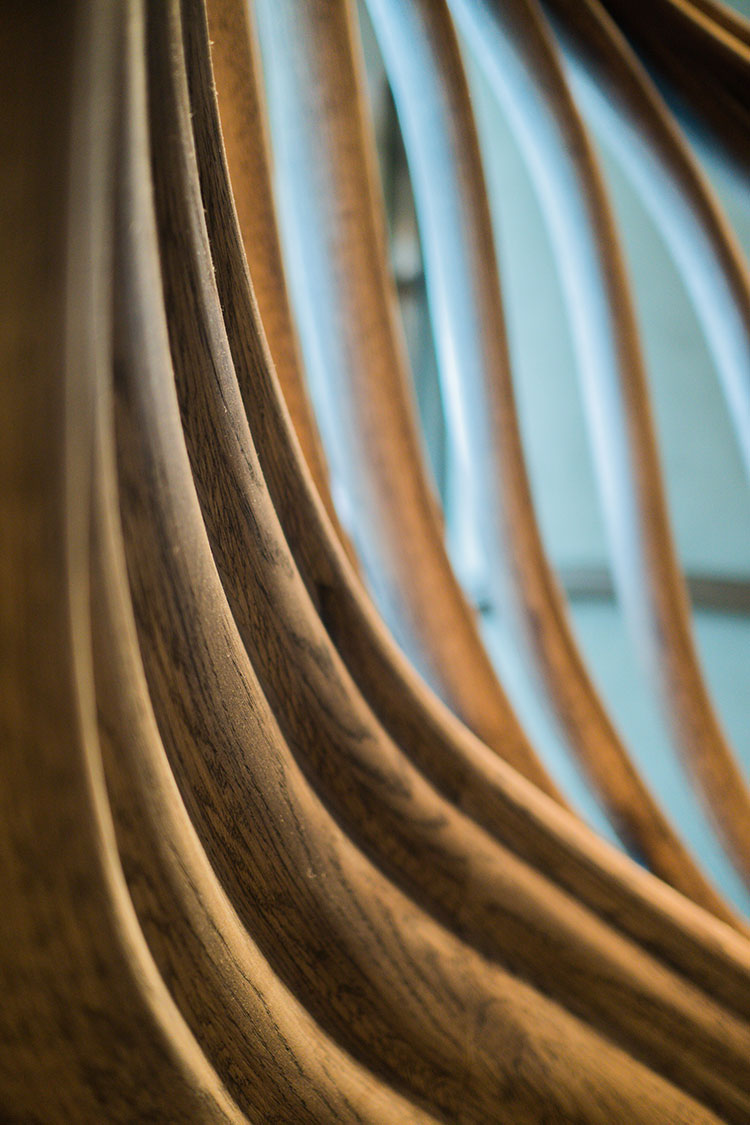