To celebrate 25-year anniversary of the Munich street magazine BISS, British artists Heather and Ivan Morison of Studio Morison have created a sculpture entitled “I Will Be With You, Whatever” that is displayed around the equestrian statue of Maximilian I in the centre of Munich. BISS is a journal venture, assisting citizens in social difficulties to help themselves. The magazine is sold by poor, ill and homeless people. The association relies on work as key to integration and has 51 of its c. 100 vendors permanently employed. 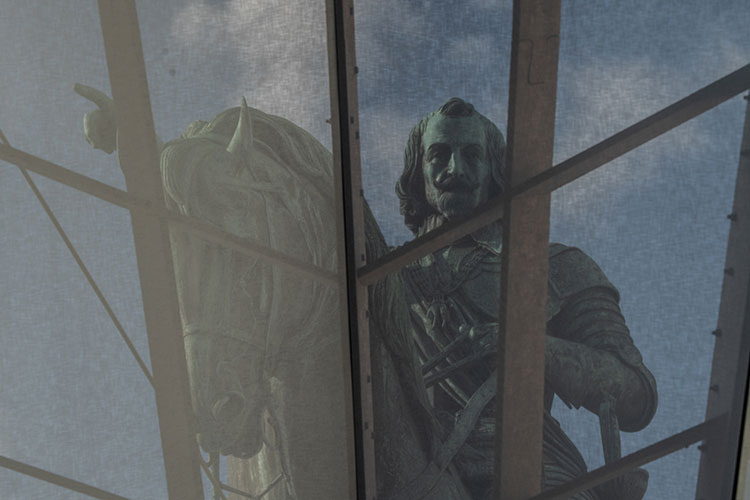 “The centre piece of the anniversary is the sculpture I Will Be With You, Whatever. For BISS this work, and its title, signifies supporting poor, ill and homeless people and helping them to overcome severe life crises,” explains Karin Lohr, BISS Chief executive. “The promise, to not leave someone alone, also holds true in the reverse: poor people will always remind us through their presence, that an equitable society must create the basis of existence for all people.”

In its form I Will Be With You, Whatever is based on a simple rectangle that takes its refined forms solely through the process of folding. The sculpture created in this manner resembles a fairground carousal or a candy. It is a gift by BISS to the people of Munich thanking them for 25 years of support. At the same time, it is a sign for the preservation of public space as a meeting place for all inhabitants of the city. 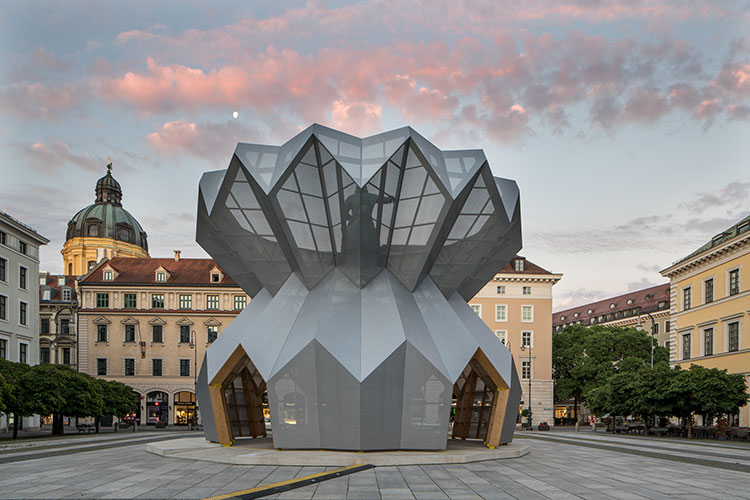 “I Will Be With You, Whatever operates particularly with public space. With its four entrances the sculpture invites entry and exploration. It thereby follows the historical function of pavilions,” says Ivan Morison. “While they traditionally played an important role in the creation of squares, parks and gardens as places of gathering, they matter only very rarely in contemporary city design. I Will Be With You, Whatever transforms a public space where usually very few people come to meet, gather or rest. Following this idea, the pavilion will always be open to the public.”

Inside the pavilion stands the equestrian statue of Maximilian I that is deliberately only partially obscured. Observed from the brink of the square, only the head and raised hand of the rider protrudes from the sculpture. Depending on light conditions, the statue is either concealed or revealed. Illumination of the statue at night ensures that Maximilian I will be visible inside the pavilion from afar. 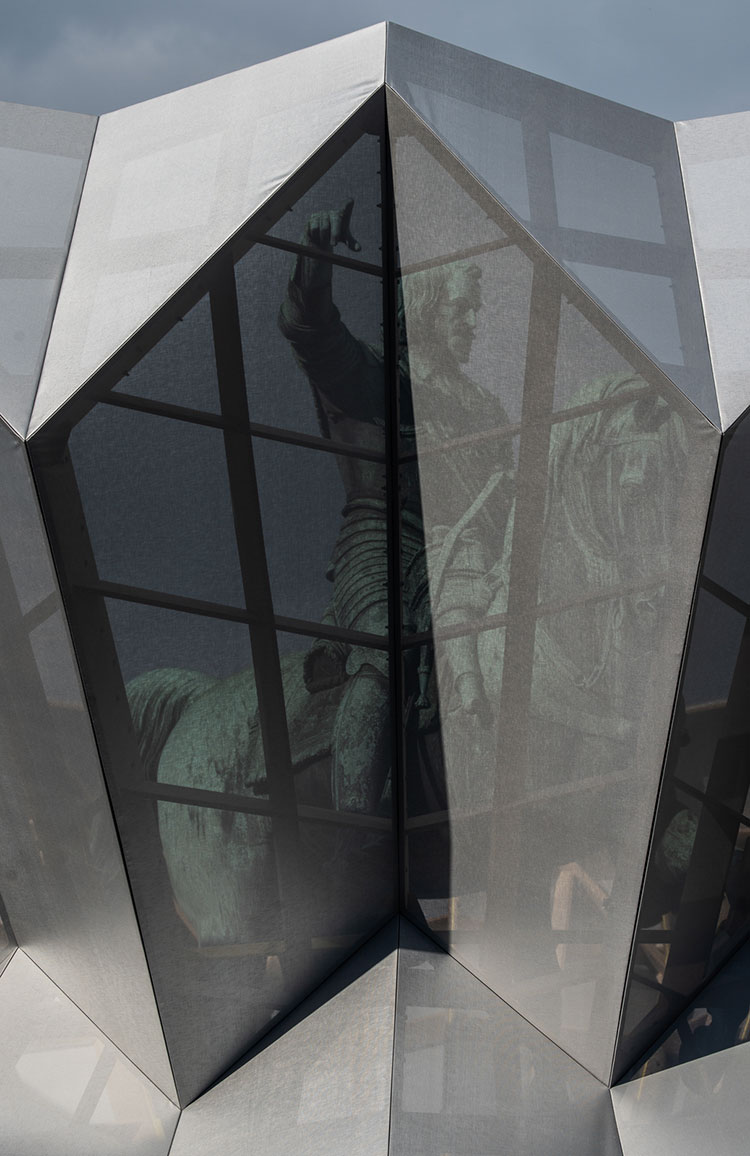 “This play with the visibility and invisibility of the statue is aimed at our attentiveness in public. Our coexistence is often vitally defined by our attentiveness in everyday life. The participation of people, who are not living in the centre of our society, can depend on their visibility in the public sphere,” explains Dr. Caroline Fuchs, Curator of the BISS jubilee. “At the same time, people can be excluded by invisible boundaries, thresholds or obstacles. The partial veiling of Maximilian I in this sense not only calls attention to the statue itself but also to our own perception of every single person.”

Like many works by Studio Morison, the nine-meter-high sculpture I Will Be With You, Whatever is an eye catcher: It shall be a beacon for BISS and its vendors. Its location was chosen programmatically: BISS belongs in the centre of Munich. That society has to take a position regarding poverty was after all already know to Maximilian I. He decreed in his will that instead of it being spent on a lavish funeral the money should be given to the poor. 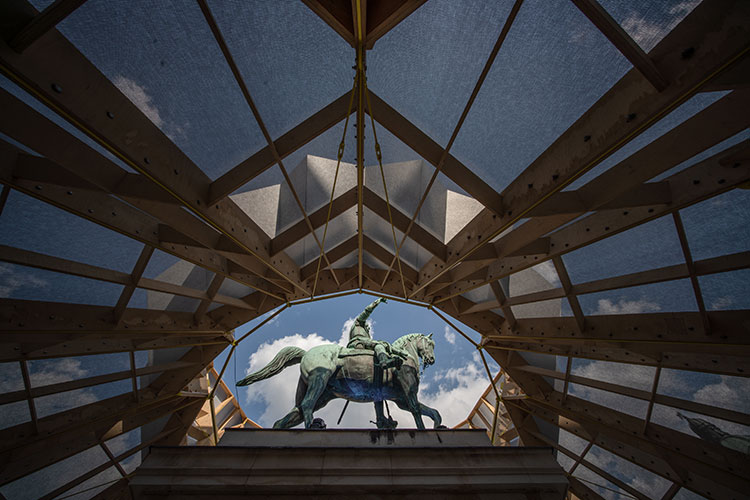 With I Will Be With You, Whatever, the Wittelsbacherplatz is being transformed into a place of exchange and encounter, a location of festivities as well as of contemplation. A manifold accompanying programme invites everybody to sing, listen, see, debate, play, move and celebrate together. It tackles questions of social (in)equality as well as our role within public space. The complete programme can be found here: www.bis-magazin.de/25jahre 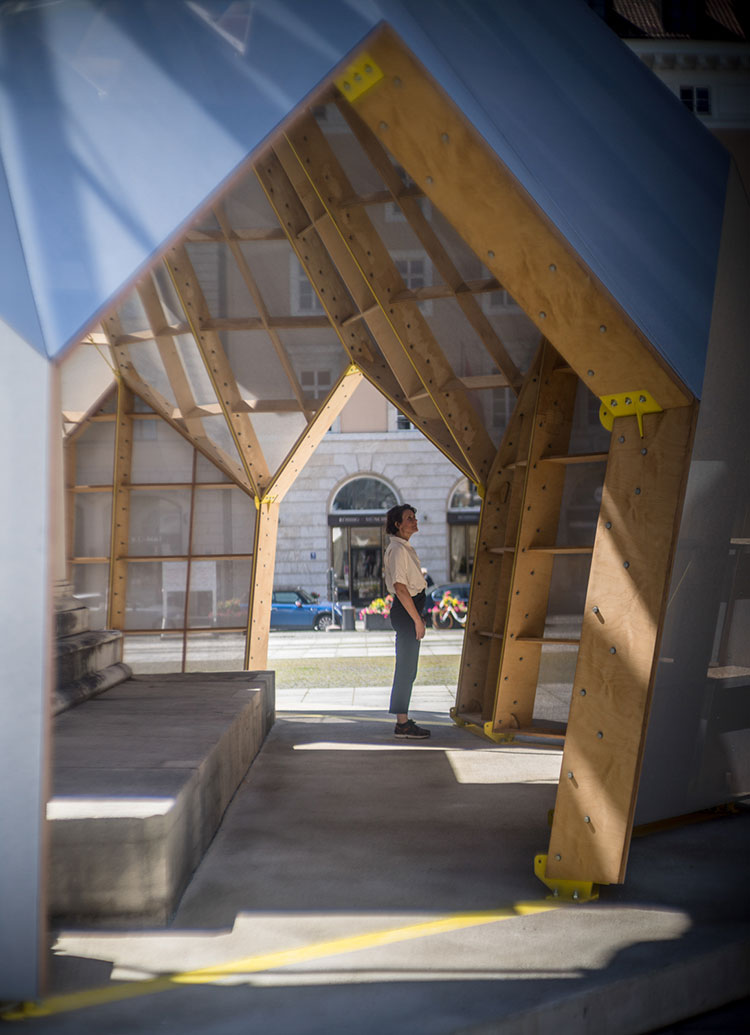 The pavilion was designed by Studio Morison and engineered by Artura Design and Engineering. It was fabricated in Bavaria by Xaver Lutzenberger GmbH & Co. The origami form is created from cnc’d engineered ply frames clad in a silver knit super mesh, held between a yellow steel skeleton.

The pavilion will be visible until October 13th 2018.