For the event of the Jinji Lake Biennial, MARC FORNES / THEVERYMANY installed a large-scale outdoor pavilion on the elevated plaza of the Suzhou Center. Its undulating enclosure interrupts the usual traffic, as an unexpected, emergent environment. It appears to have bubbled up from the ground, or dropped from the sky. The structure, both massive in scale and delicate in white aluminum, lands lightly on an ultra-thin edge.

Boolean Operator —so named for the function that determines relationships between statements, geometries or forms—makes an impression from a distance. Unlike the surrounding texture of the city, this curious structure radiates an otherworldly quality. It casts a strange shadow. It seems to conceal something behind its porous shell. Like seeing the full moon on a clear night, you can start to identify its surface, its irregular craters, and its possible depths. You are drawn closer into its gravitational pull. 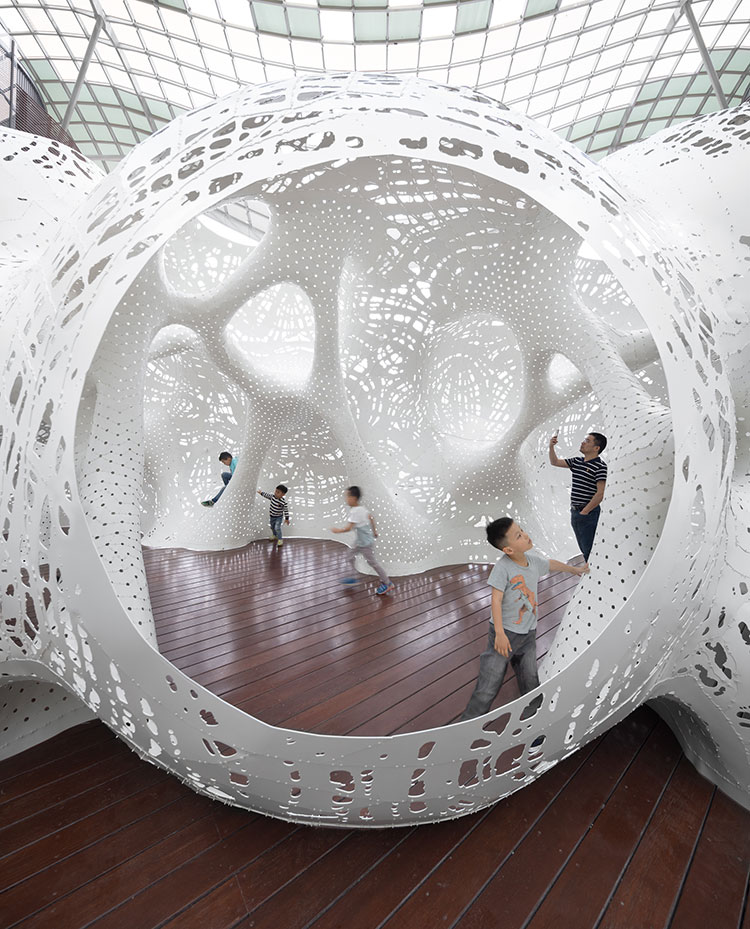 Entering the structure is a revelatory experience. Something between a vessel that’s carefully engineered to “move” you and a destination in itself, Boolean Operator transcends the surrounding environment, even as it remains embedded in it.

Looking to the extraordinary paths around the moon, to the bottom of the sea, and into the center of the earth, Marc Fornes and his team took inspiration from the celebrated author Jules Verne. Across the 54 volumes that make up his Voyages Extraordinaires, Verne opens portals to other universes, but he also delights in the means of travelling there. The ship that takes Captain Nemo to the bottom of the sea is described as both a tactical vehicle and a lush interior, outfitted with an organ, salon, and a formal dining room.

Like Verne’s Nautilus, a ship modeled on an early French submarine, THEVERYMANY‘s ultra-thin shell structure is a transporting vessel. The vector of translation from one world to another is highly engineered, and for Verne, ahead of its time. Disguised as a kind of sea creature in steel sheet metal, the Nautilus becomes a conspicuous part of the habitat it navigates. The technology described in the Voyages Extraordinaires prefigures the innovations with which we are familiar today: u-boats, satellites, spacecrafts, and television. A century and a half after Verne, THEVERYMANY are dedicated to making real the fantasies otherwise relegated to the digital and they practiced in fabricating architecture that defies convention. Over a decade of prototyping double-curving constructions and realizing “crawling assemblies”– the rigorous pursuit of another kind of architectural experience — has taken the studio to this site across the world from their Brooklyn studio.

The interior of the pavilion reveals an unreal space only separated from the city by a porous 2mm shell. It stretches impossibly into great depth, and the fine resolution of its curving surface render its extents indeterminate. You have to wander through to feel out all that the space contains. 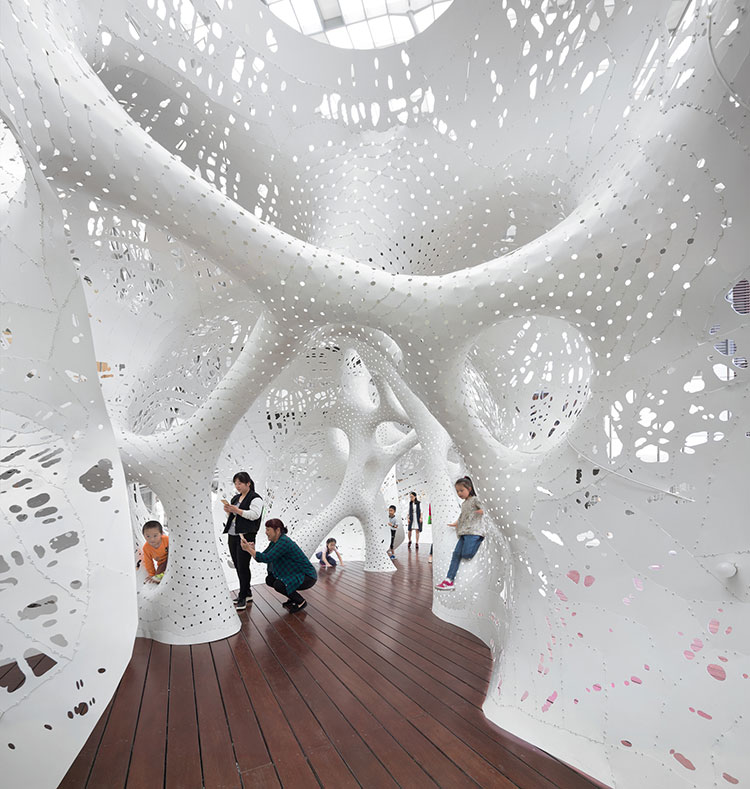 Suffuse in light, the details come into and out of focus. A continuous surface grows from a network of columns that peel open into the enclosing shell. The intricacy of the skin asserts a density: of limbs, ofopenings, of parts and their connections. You have to let your eyes adjust to the resolution of the experience. Unfocusing your gaze again, the whole scene overwhelms, strikes awe, compels you to move closer, deeper, and through an edgeless space. The doubly-curved surfaces cast no regular shadows, giving little information to the eye to perceive its scale or depth. The only way to understand the space is to move through it. Your winding path isn’t designed, but implied by a swirl of light, plotted on a map of your own desires. 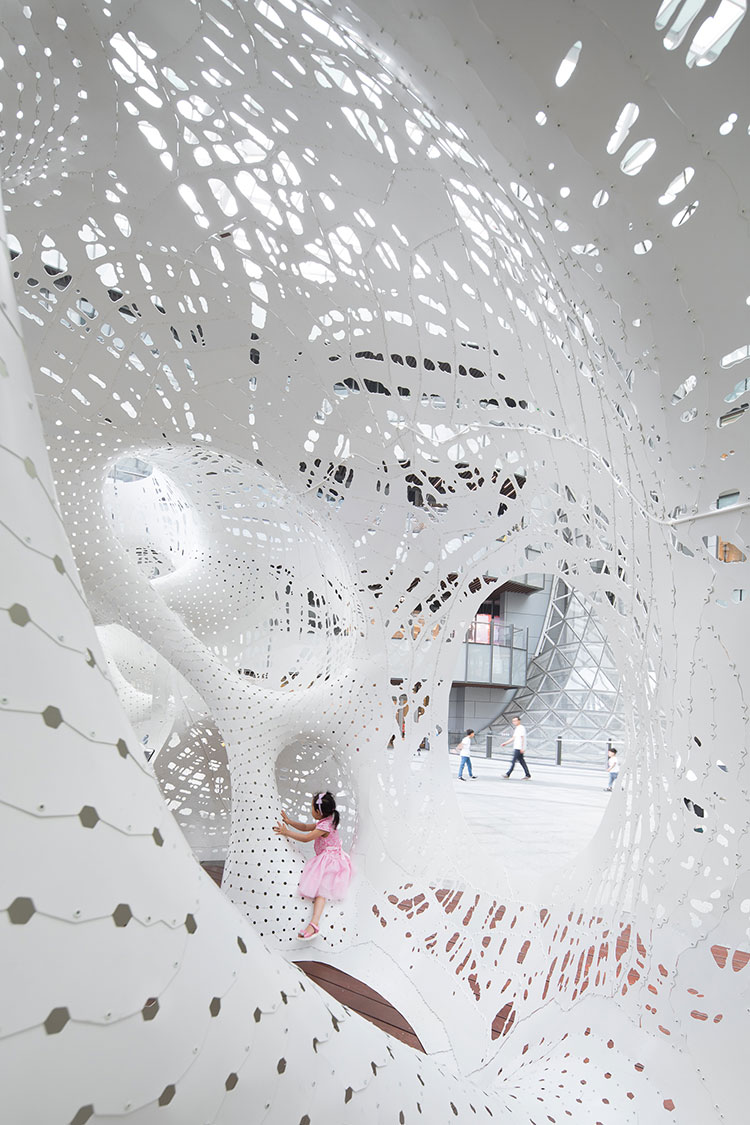 A continuous surface grows from a network of columns that peel open into the enclosing shell. Topologically , there is no simple dichotomy between envelope and supports, but the two are made from a continuous skin that self-supports throughout. The relationship is like an unwrapping: what is inside of the columns eventually becomes the outside of the shell. In aluminum parts as thin as 1mm in places where the curvature is tightest and up to 2mm thick on the largest spans, the structure maintains a light impact on the ground.

And so it becomes a irresistible terrain for play. All the instances where columns branch and recombine into the bulbous shell, make for an architecture that opens to climbing, ducking, hurdling, hiding and seeking. Children are the best explorers of this environment, while attending parents wonder how the structure sustains this activity despite being so thin.