Award-winning British artist and designer Es Devlin OBE is set to design the UK Pavilion at Expo 2020 Dubai. The Pavilion will be the centerpiece of the UK’s presence at the Expo – highlighting UK expertise in artificial intelligence and the space sector and will be produced in collaboration with global brand agency Avantgarde, who will join forces with structural engineers Atelier One and sustainability engineers Atelier Ten. The Poem Pavilion will feature an illuminated “Message to Space,” with each of the Expo’s projected 25 million visitors invited to contribute. The 20-meter-high, cone-shaped pavilion will be made up of rows of protruding slats that extend outwards from one central point to form a circular facade. Poems lit up in LEDs will scroll across the facade.

Visitors will enter the building from below the cone through an illuminated Maze of Aspiration. Featuring augmented reality-enhanced exhibitions, the maze transforms the queue – which Expo visitors often complain about – into a virtue, using it to entertain and educate visitors while they explore Britain’s advances in artificial intelligence and space technology.

Es Devlin OBE is known for creating stunning large-scale performative sculptures that fuse technology and poetry, including the interactive Fifth Lion sculpture installed in Trafalgar Square. Her dramatic design for the UK Pavilion is an illuminated sculptural message to which each of the Expo’s anticipated 25 million visitors will be invited to contribute. 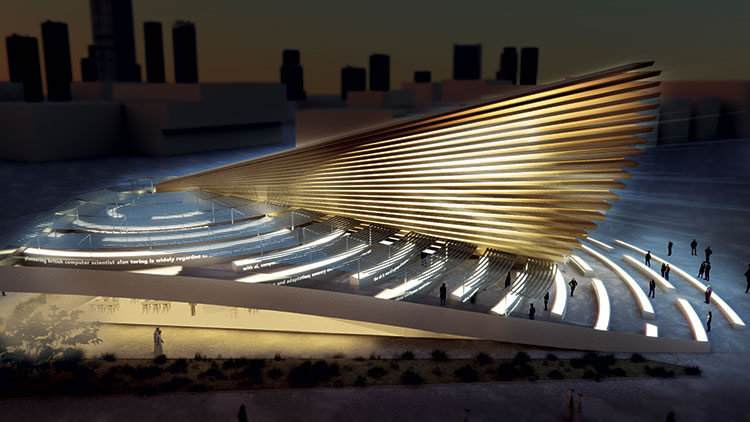 “The idea draws directly on one of Stephen Hawking’s final projects, ‘Breakthrough Message’, a global competition that Hawking and his colleagues conceived in 2015 inviting people worldwide to consider what message we would communicate to express ourselves as a planet, should we one day encounter other advanced civilizations in Space,” said Devlin. “What if the UK Pavilion at Expo 2020 became a place where visitors from all over the world chose to take part in a collective global project that showcases British expertise in AI technologies and poetry while transcending national identities.” 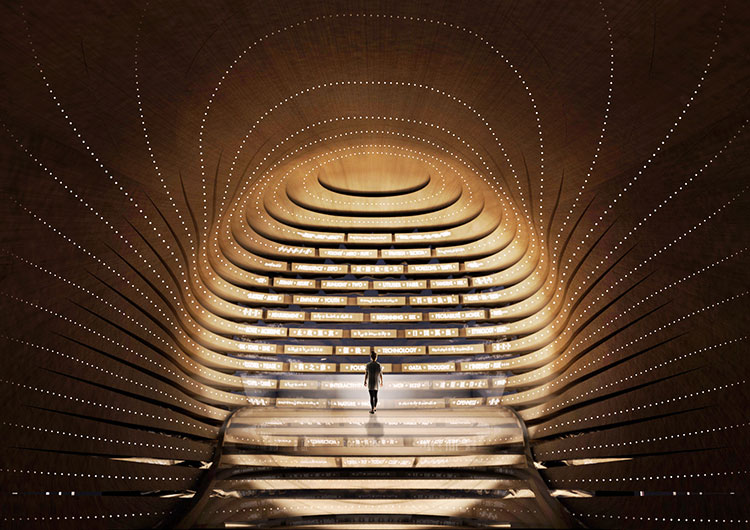 Devlin will also be the first female designer of a UK Pavilion since its inception in 1851, leading a predominantly female team of experts from the fields of artificial intelligence and space technology. Devlin views the project as an inspiration for “girls and young women to investigate areas of science and technology that they might otherwise have felt weren’t for them.”