Designer Simon Hjermind Jensen of SHJworks has unveiled ‘Biotope’, an experiment to understand how a microcosm of plants and insects can survive when sited at an exposed and harsh urban location. Located in Copenhagen, the project address two words and their content: bios — meaning ‘life’ in greek, and topos meaning ‘place’. A bowl of concrete, a shell of polycarbonate, soil, plants for insects, bees and a beehive of plywood are all parts of the project. It is 7 m long, 4 m wide and 3 m tall at the highest point. 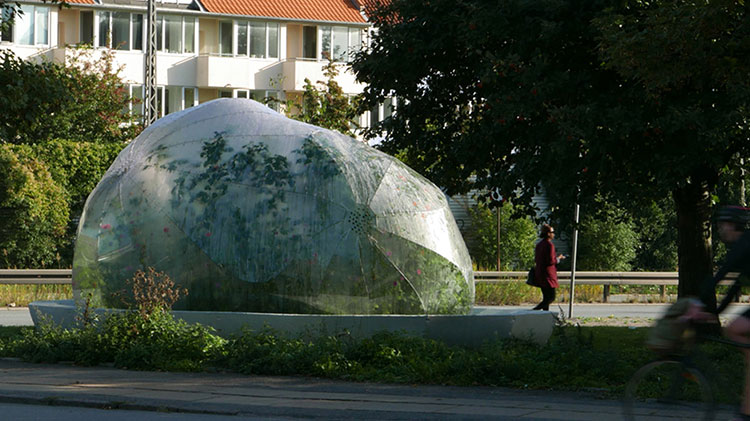 The stage for the project is a small triangular greenery in the middle of an intersection with heavy traffic of the city. A train station is nearby, and a three-lane road together with a minor road is next to it. A lot of people walk, cycle or drive past this place every day. The edge of the bowl functions as a bench, and the inside life of the shell functions as an ever-changing visual interest for the everyday passersby.

The bowl collects rainwater and leads it into the soil through small holes in the shell. In this way the plastic shell and the concrete bowl become a self-watering greenhouse. Sixty different seeds have been sown into the soil. Later as plants the majority of these seeds will attract insects. On the inside of the shell a beehive is attached. The bees have directly access to both the outside and the inside. 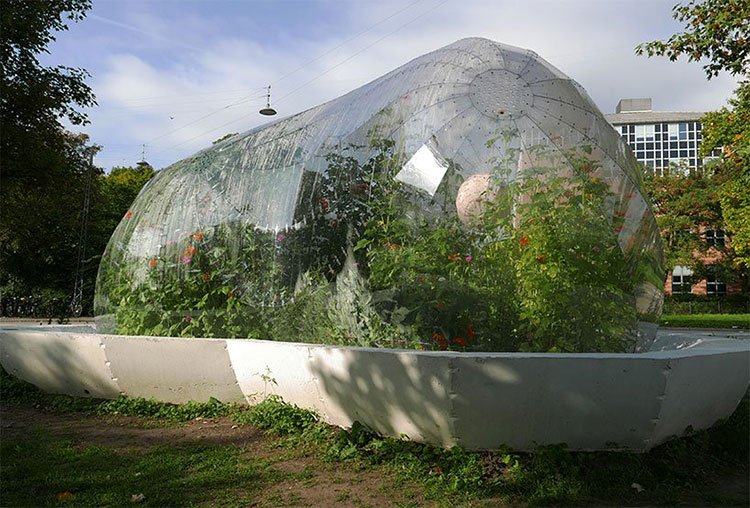 It is a temporary project standing for a three year period, and during these years there will be no maintenance or interference inside the shell. Neither is it possible for the public to access the shell. How the inside life with plants and insects will evolve over time is an experiment.

The sculptural and organic shape of the project is made specifically for the place. The shell mimics a simple shape of a primitive organism or bacteria. It lies with its “back” against the minor road and its “face” towards the most intense and energetic element: the three lane road. By lying in this “posture” the project creates a small protected area between itself and an existing tree on the triangular greenery. 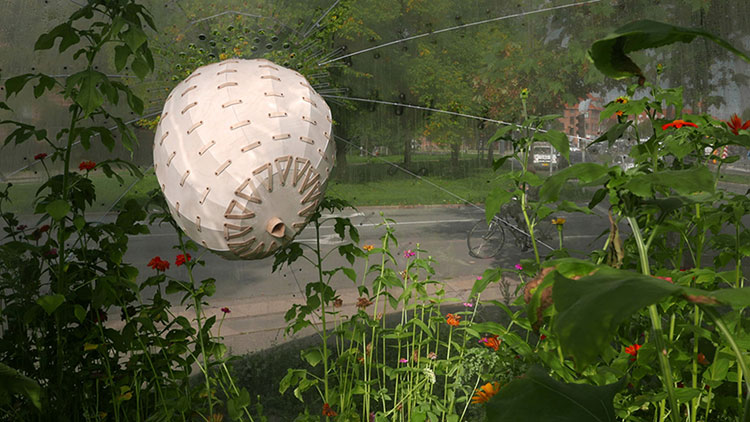 The intention of mimicking a shape of a living organism is to explore if we humans can feel related to such a form. And if so, to see if an organic shape can be a “mediator” between humans and places. Can feelings of sympathy towards objects or structures establish a stronger and more caring relationship to the place in which we live and inhabit?

The shell, made of clear 4 mm thick polycarbonate, acts as a film or a membrane. It protects the inside life from the outside harsh traffic and it creates a greenhouse effect. In favor of the plants the shell also holds back the moisture. The structural concept of the shell is a further development of SHJWORKS´s distinctive construction technique with single curved shells. This time they have added a ceramic and intuitive element in the creating of the organic shaped structure.

By starting to sketch in ceramic they are able to create a more complex shape on which they directly can draw the constructional pattern. From there they scan selected points on the ceramic model, and rebuild it with vector lines in the computer. Then they work as usual: they unfold the shells digitally and CNC mill them from sheets, before they assemble and bend the shells into a three-dimensional structure. 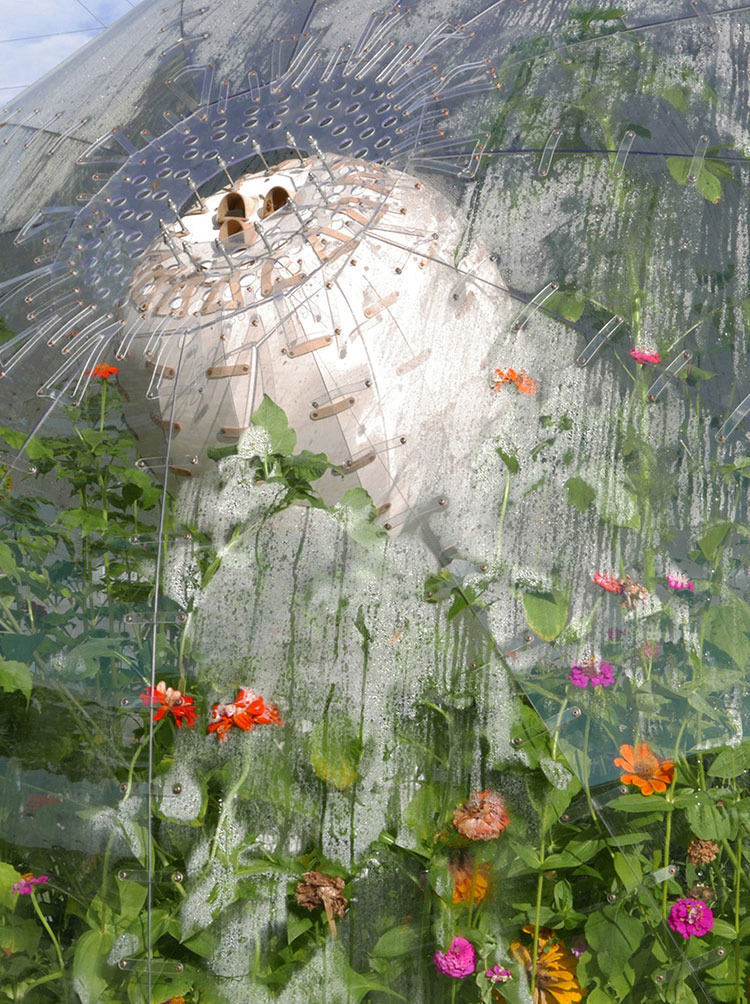 Our climate will change. And maybe we will integrate plants and biological microcosms in our future dwellings and cities. Most likely there will be more harsh and exposed environment on our planet. And we ask ourselves if a solution will be to create microclimates where we – like the bees in this project – have our homes connected to and intertwined with? 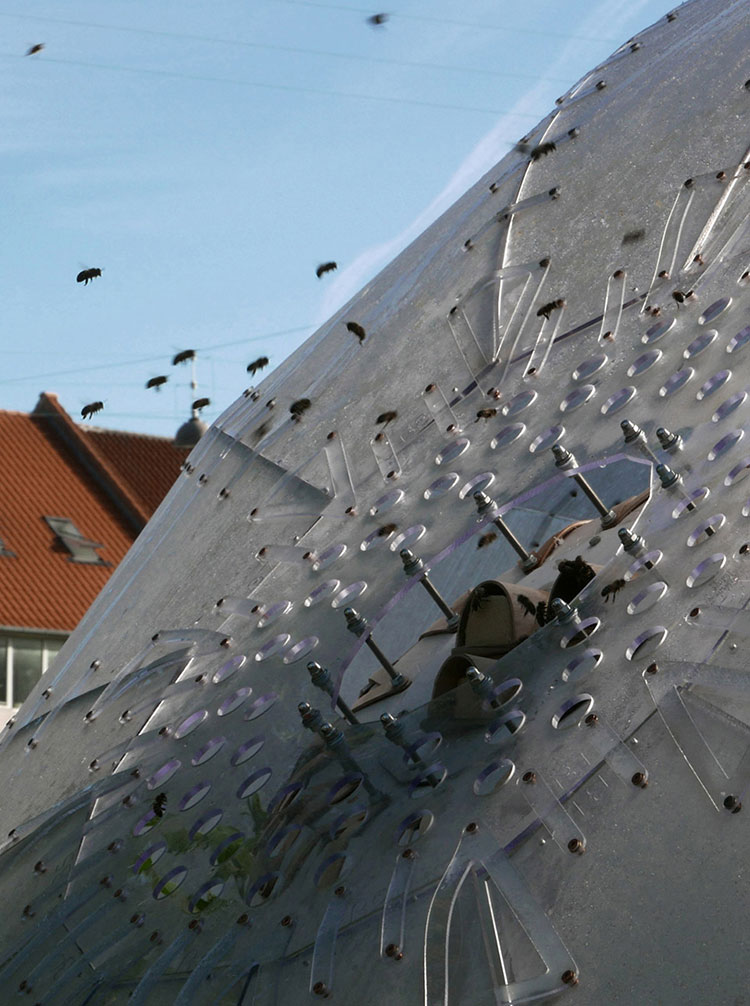 The quote from Wikipedia describes a living structure with architectural qualities. Often a shrimp lives inside the Venus Flower Basket. The two gain from each other and they create a symbiosis. Will we be able to create living biological structures with architectural and inhabitable qualities in a distant future? In a symbiotic way where our climate and environment can gain from our living conditions?