The launch of the Seetroën glasses in July 2018 made a big splash, with over 20 million web views and sales of 15,000 units in the space of a few months. Following this success, Citroën is launching a new model of the anti-travel sickness glasses: Seetroën S19.

As with the initial model, Seetroën S19 glasses were developed with the start-up Boarding Ring and the design studio 5.5. The new, even smarter, glasses feature transparency technology, with a gradation matching the blue liquid that recreates the horizon line to resolve the conflict of the senses.

With more and more time spent reading on smartphones and tablets, travel sickness affects children and adults, in cars as well as boats, buses and other means of transport. As its predecessor, these new glasses use Boarding Ring technology developed by the start-up of the same name based in the Var in the south of France. The patented and tested paramedical solution has an efficacy rating of 95%. Equipped with moving liquid in the rings around the eyes, both along the frontal axis (right/left) and sagittal axis (front/back), the glasses recreate the horizon line to resolve the conflict between the senses that causes the affliction. 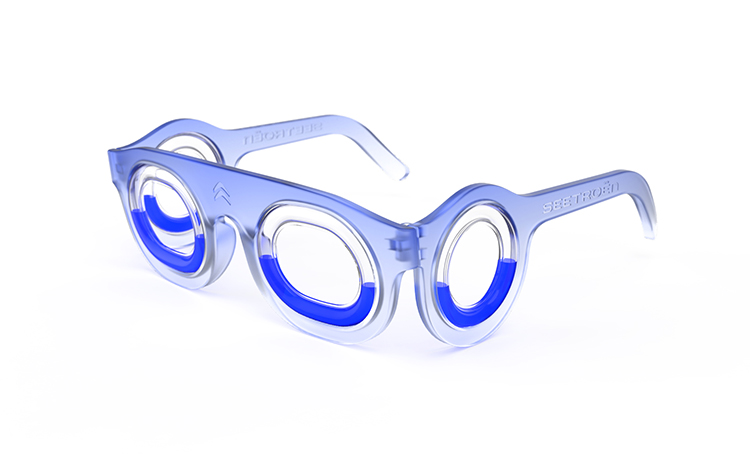 Seetroën S19 is a limited series produced in 1,919 units, in honor of the Brand’s centenary year. The two Seetroën models are available for €99 (∼  $110 USD) at the Brand’s lifestyle boutique lifestyle.citroen.com in the following countries: France, Portugal, Benelux, Spain, Italy, Austria, Germany, the Netherlands, the UK, Ireland and Poland. Customers outside these countries can be delivered around the world by ordering on the Citroën Racing.

Both Seetroën models can be worn by adults and children aged ten and over (when the inner ear finishes growing). The glasses do not contain lenses, so they may be shared by all family members and travelling companions. Users simply put them on for 10 to 12 minutes when the initial symptoms appear.