Studio INI has unveiled Urban Imprint, an immersive installation at A/D/O by MINI in Brooklyn that reconstructs the fabric of our urban environment and imagines the city as a megaphone to the self. The outdoor installation has opened to the public on May 17th, during NYCxDesign, and will be on view through September.

Designed for the outdoor courtyard of A/D/O’s creative space in Greenpoint, Brooklyn, the installation reimagines the relationship between people and their built environment, allowing visitors to reshape their physical space and architecture as a result of their own movement. The boundaries of the immersive, cocoon-like surface will rise, recede, and partially separate as people walk through the piece, to give each individual a unique and intensely personal experience.

“In cities, we are so often adapting to the physical constraints of a predefined plan, as if poured into a vessel of concrete and glass,” said Nassia Inglessis, founder of Studio INI. “I wanted to explore what it would look like to create a more symbiotic and ‘natural’ relationship between us and our built environment. In nature, the human self is both part of an ecosystem and an architect of the constructed space; a space that takes form as a result of the imprint from all the living organisms that inhabit it. The goal of Urban Imprint is to explore the potential of a highly responsive urban space; one that I hope can allow its visitors to feel present and empowered through their own unique imprint.” 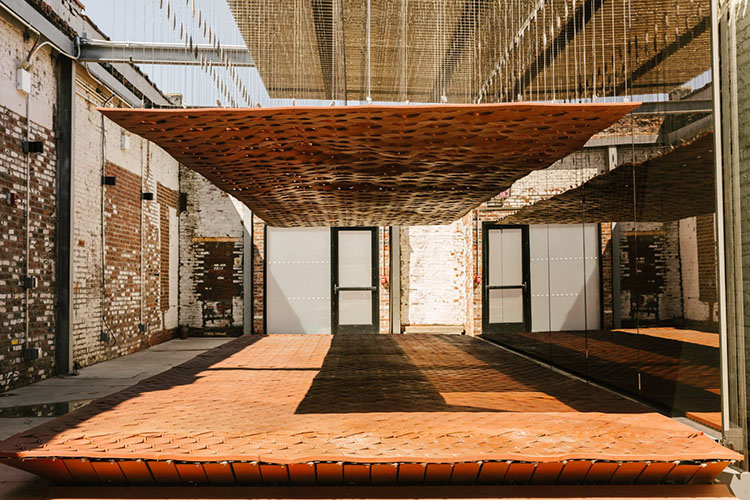 The Urban Imprint installation comprises a rubber-concrete mix that forms the “floor” and “ceiling” surfaces, perforated with a hexagonal pattern that allows the material to flex and stretch when pushed or pulled. Spread underneath the flooring are steel springs, which accommodate the weight of the user. When compressed, the springs enact a system of pulleys and cables, connected to the exact corresponding area of the ceiling above.

“I wanted the presence, the weight and the movement to be the initial triggers of the actuation. And I wanted this to be all-encompassing,” said Inglessis. 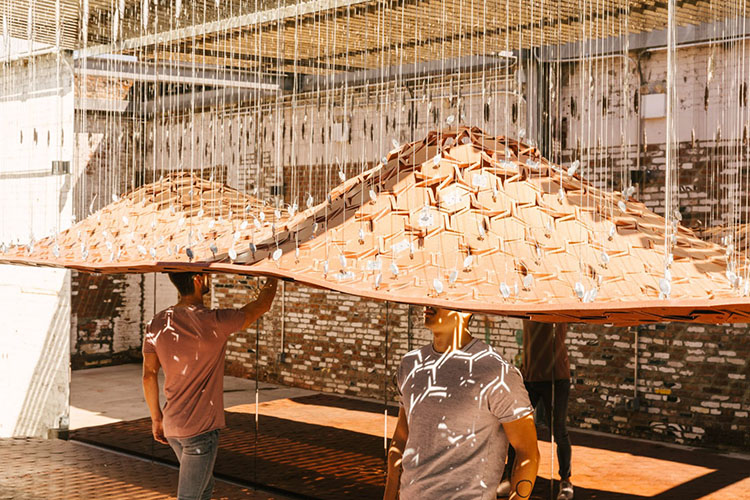 Mirrored panels along the back side of the installation hide the vertical cables, or “veins” as Inglessis describes them, and a framework above organizes them into neat rows. The pulley system is designed to amplify the deformation of the floor in the ceiling, creating a much bigger spatial shift overhead compared to what is occurring under foot. “We’ve played with different diameters of pulley so that deformation is multiplied four times, and transferred directly onto the ceiling, which stretches four times more,” Inglessis said.

The installation is constructed from seven sections, which were lined up and riveted together to create an almost seamless whole. “The beauty with this system is that it’s one body,” said Inglessis. “Every single part of it is connected to the next. Everything needs to be connected for it act as one. One beast.” 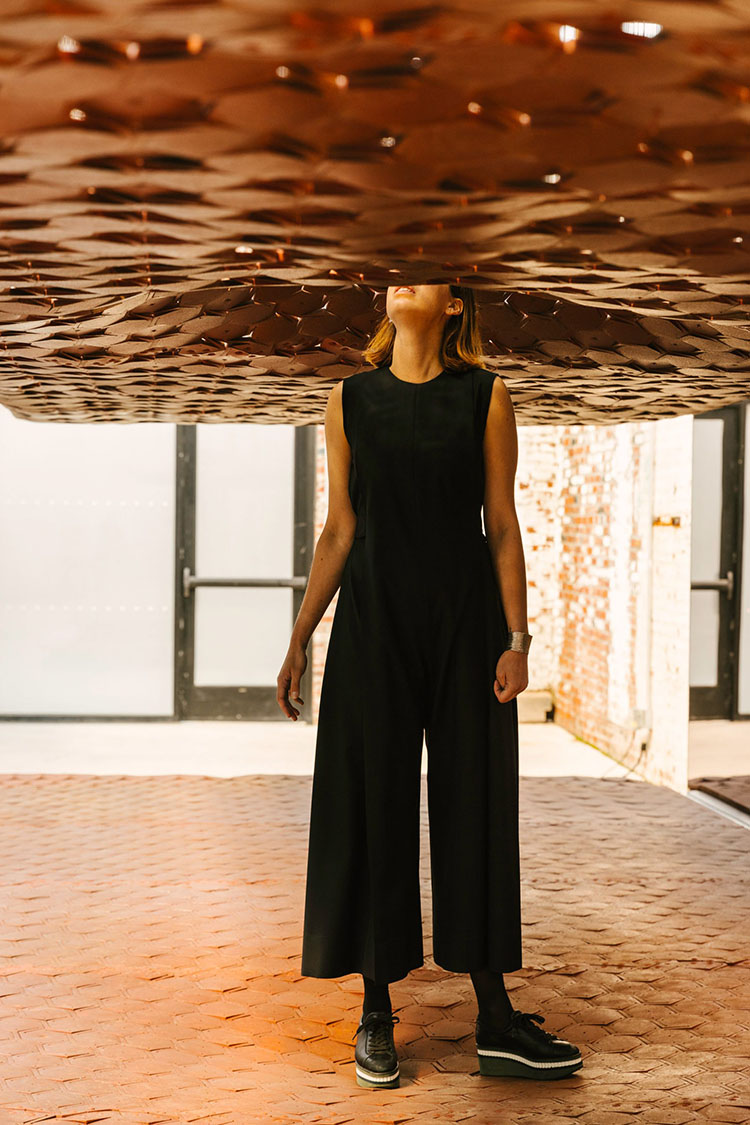 Occupying the majority of the courtyard at A/D/O, Urban Imprint allows four visitors at a time to walk through an adaptable environment, and experience how their body weight influences and alters the space around them.

“When you step onto it, suddenly the floor doesn’t feel like a floor; doesn’t feel like a boundary. It recedes and depresses,” said Inglessis. “The space adapts to you, not you to it. You’re forming the space, and the space – as an exoskeleton – is almost an extension of yourself. Then there’s the interaction with the people around you, and how they form the space.”

“You create your own cocoon, in a way, from what feels like very rigid materials,” she added. 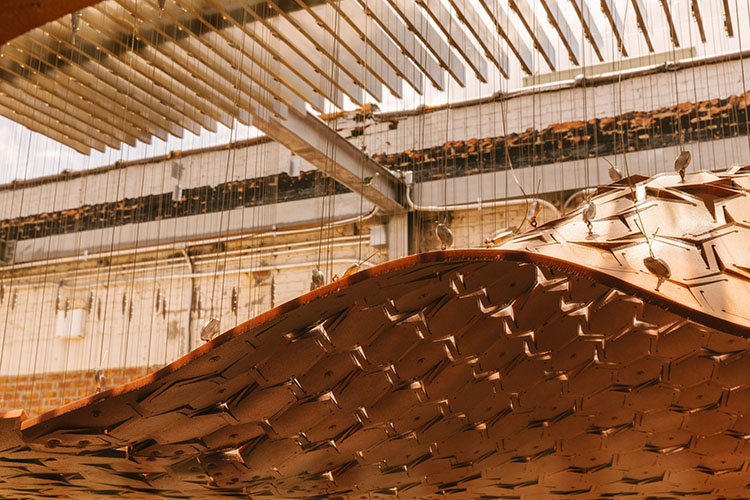 Another effect of moving through the installation is the shifts in light. As the material flexes and the hexagonal pattern expands, the gaps allow natural light in through the ceiling. After dark, this effect is amplified with artificial lighting installed under the floor and above the ceiling. 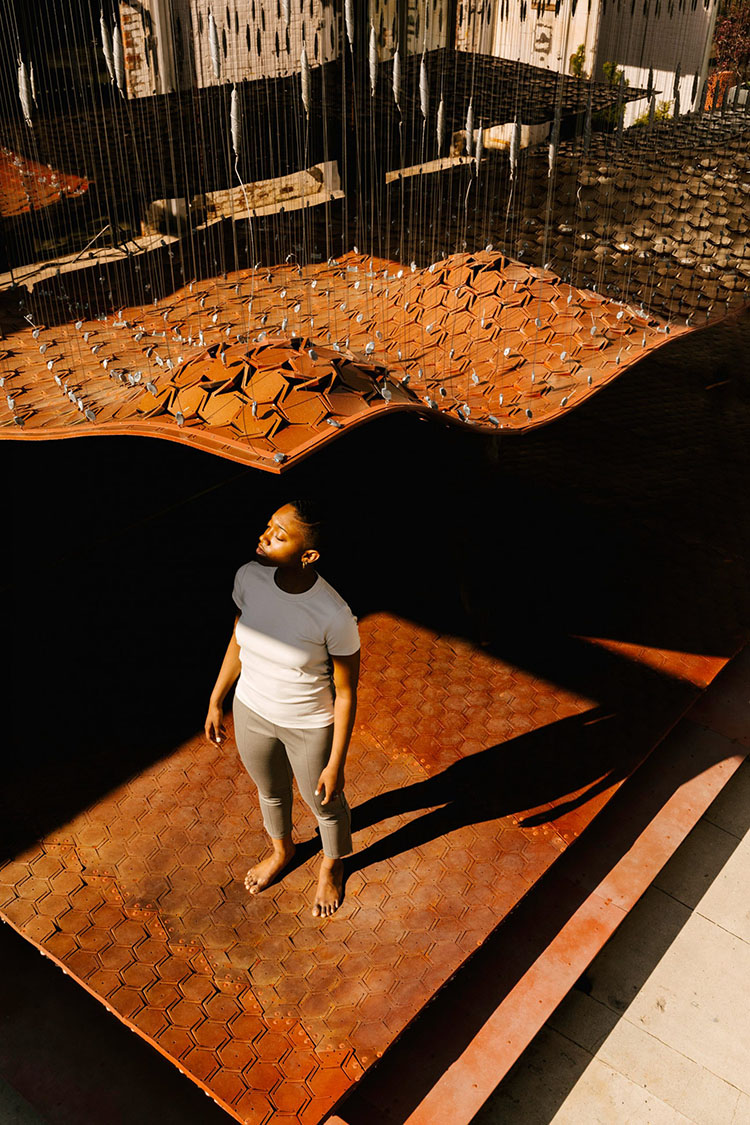 Overall, the installation is intended to provoke curiosity and surprise. Since Urban Imprint is so interactive, and requires a human user to activate it, the outcome is innately unpredictable – and that is precisely what Inglessis wanted.

“When people first experience the installation, it’s not going to be immediately evident how it works,” she said. “What will be very exciting to me is seeing the moment of realization that they are what’s causing this action; that they are the trigger. And I’m sure I will discover new ways that people will interact with it, that I hadn’t even thought about.”

The debut of Urban Imprint marks A/D/O’s second presentation during the festival, following on from the success of the 2018 interactive installations Spirit of the Sky designed by United Visual Artists (UVA).