In 2019, Architect Jean-Maxime Labrecque was awarded five design and architecture prizes for his singular project, Infinite Buildings.  Last October 14, he was presented with the Architecture MasterPrize Interior Design of the Year Award at a gala held in the Guggenheim Museum Bilbao. In June, Jean-Maxime Labrecque had already won an Azure Magazine AZ Award at a gala that took place at Toronto’s Evergreen Brick Works, while earlier in the year, he had received an Excellence Award from the Québec Association of Architects (OAQ), a German Design Award from the German Design Council and a Grand Prix du Design Award for the same work. 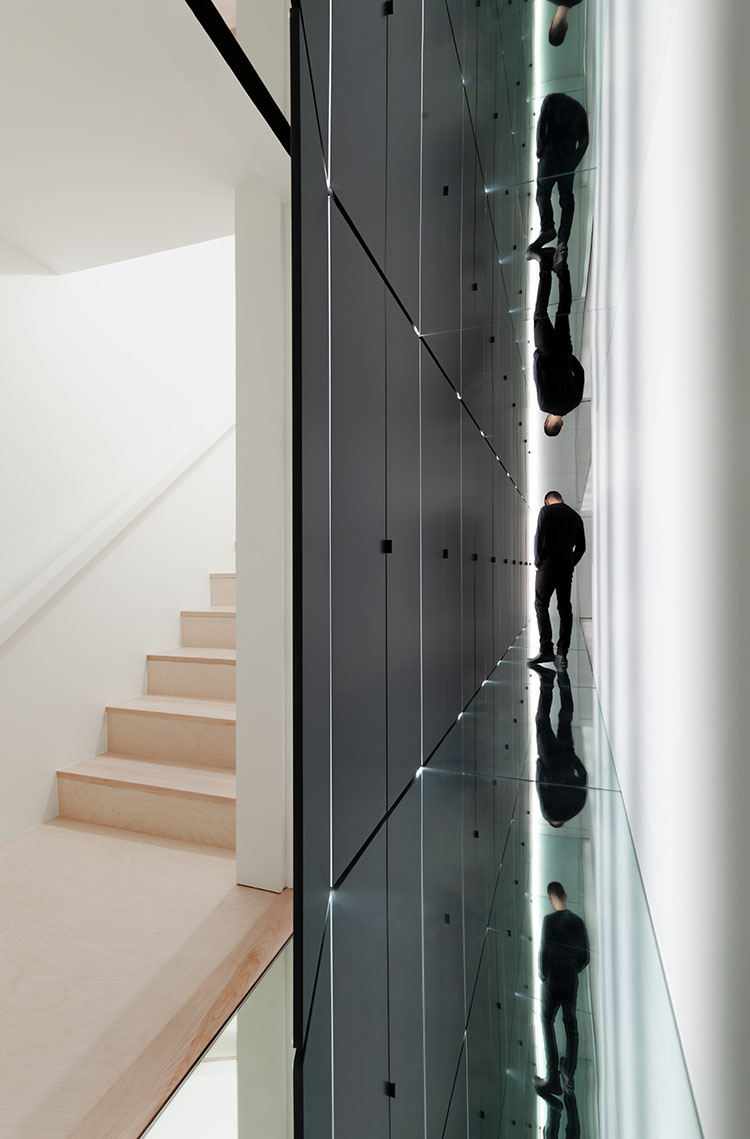 The prize-winning project, with its surprisingly modest dimensions, demonstrates how a creative idea can transform a leftover area into a space that is at once visually stunning and poetic. The architect first explored this concept in 2011 when he was asked to rethink the fitting rooms of a clothing boutique he had designed a few years earlier.

All six interior faces of the tiny fitting rooms (1.2m x 1.2m x 2.1m) were covered with mirrors, generating mises en abîme in every direction and giving the customers the impression of stepping into an infinite multi-storey building, devoid of any horizontal boundaries. This project, named Infinity in Isolation, was to serve as the inspiration for Jean-Maxime Labrecque’s more recent project, based on similar principles and starting from the same ceiling height, but covering a surface twelve times greater. 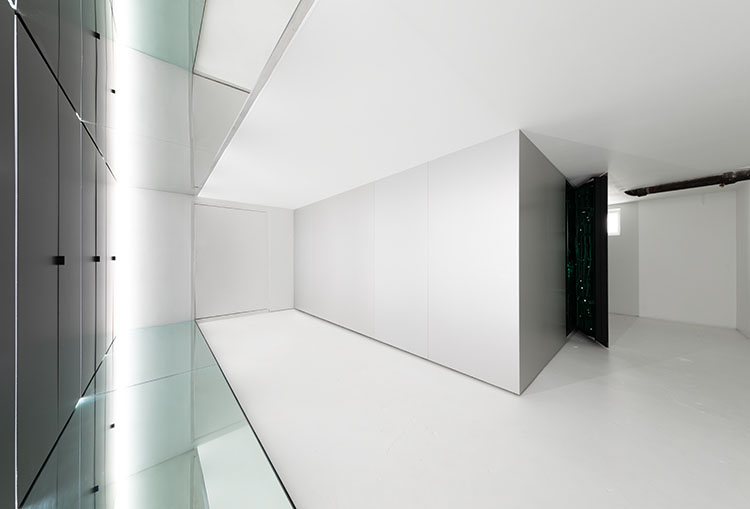 The project of devoting an entire floor to an art installation was born through conversations between the architect and the art collector clients who had given him the commission of renovating their Montreal residence in 2014. They effectively gave him carte blanche to completely transform the lower floor of the building. For the architect, the reconfiguration of this space, with its barely two-meter high ceilings, became a challenge, as the building’s existing structure could not be altered. 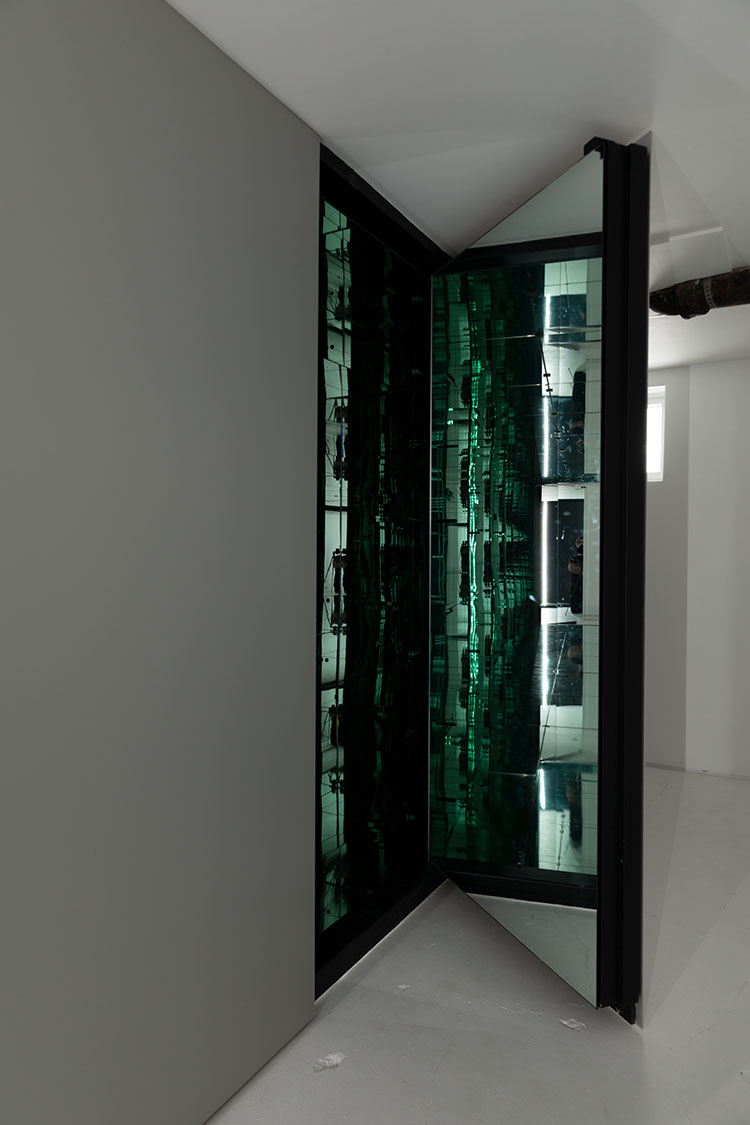 Two installations were proposed. One takes the form of a narrow corridor and the other is set inside a square room measuring 4m x 4m. The project simply consists in covering certain surfaces with standard mirrors to make the limits of reality disappear.

The first of the two Buildings Inside Buildings is located in a narrow basement corridor. It gives the impression of a building suddenly rising and falling towards infinity. This trompe-l’oeil effect is generated by the reflections of mirrors covering the floor and ceiling. The left wall along the itinerary is defined by a long series of black cabinet doors that are endlessly reflected by the mirrors towards the depths of the ground and the heights of the sky. Following this path leads to an intriguing aluminum monolith. 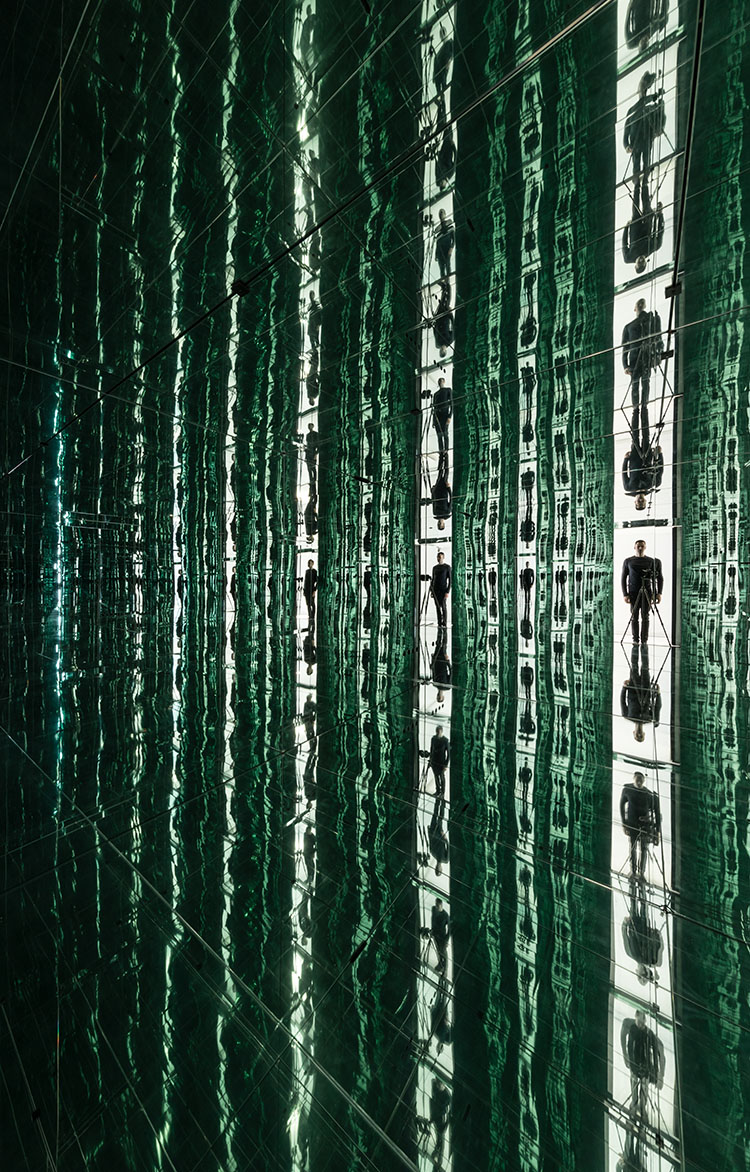 The second Buildings Inside Buildings is located in the metallic volume and can be accessed from the corridor. The entirety of its interior surfaces—walls, floor and ceiling—is covered with mirrors. By positioning a camera on a tripod in the entrance of the monolith, it is possible to take photographs that give a sense of infinite facades. Conceptually, the generic individual seen on the pictures is standing by the window of his unit located on the Xth floor of the Infinite Building. Let’s note that the photos presented here have not been edited in any way. 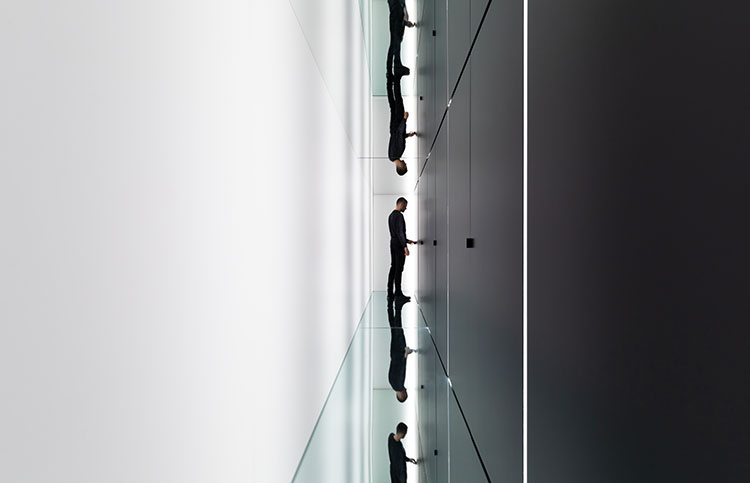 The Infinite Buildings project is the result of patient research work undertook by Jean-Maxime Labrecque in the early 2000s when he was conceiving his first exhibition design project in Portugal. This work would lead him to many more European projects in exhibition design, as for example the Archéoforum in Liège, a subterranean archeological site in Belgium that is still visible today.

In 2007, the rear wall of a Montreal clothing boutique reproduced the rhythm of its displays inspired by the Seagram Building’s I-beams. Two years later, The François-Houdé installation would generate the first exploration of the series of mises en abîme that followed.