Spanning over 60 meters and weighing 40 tons, a crystal gem-studded sculpture featuring two flying dragons is the largest installation Lasvit has ever made. Two dragons fighting over a flaming pearl are a symbol deeply rooted in Chinese mythology. Lasvit materialized this symbol in the form of a jewel piece, which aims to be listed in the Guinness World Records and now decorates the lobby of the Imperial Palace Saipan. The installation fits into the overall design concept created by DSAA architects. 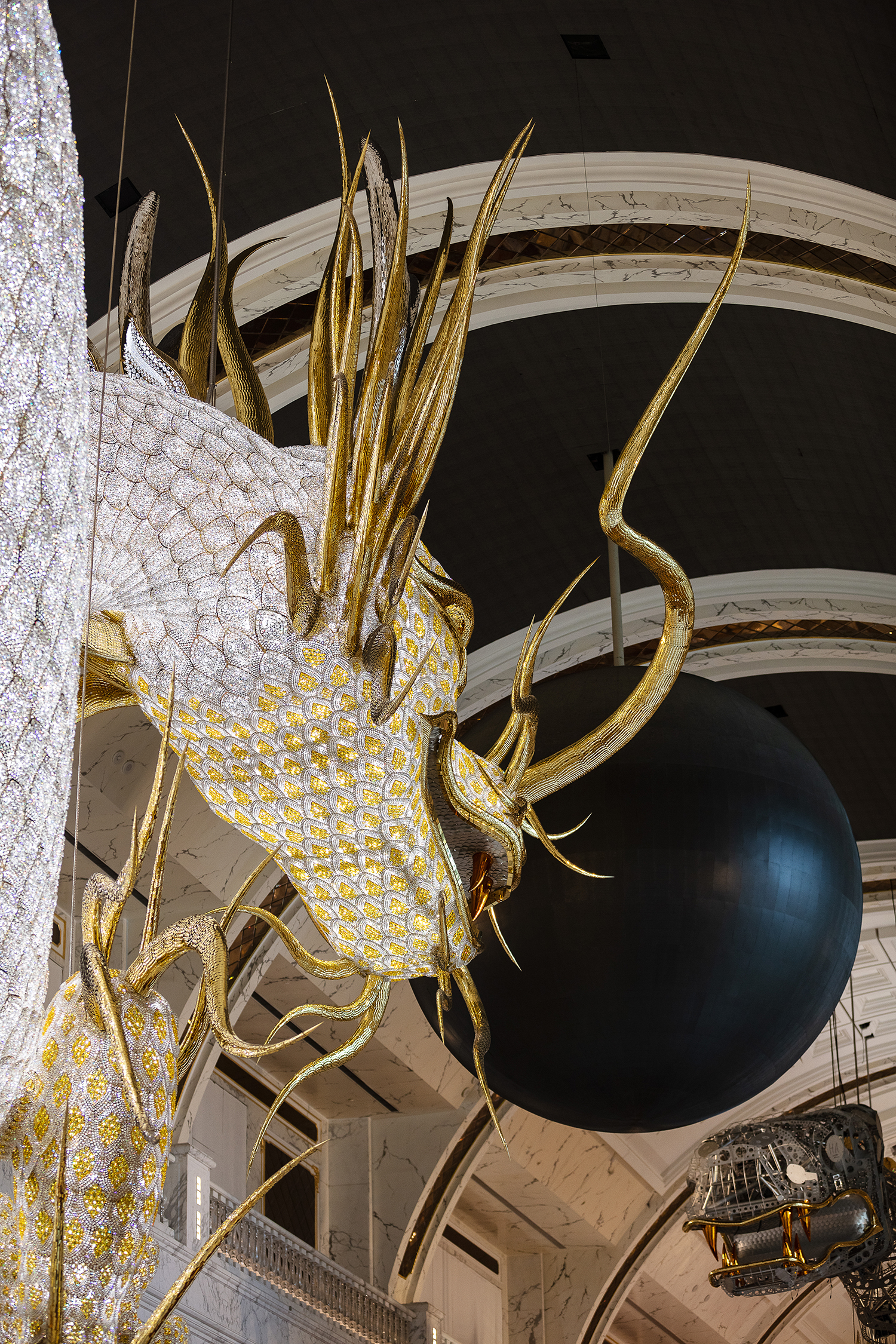 The Czech design and glassmaking company Lasvit created the golden dragons out of stainless steel, gold and crystals. There are 2,5 million of crystals covering the scales on the dragon’s body. Each is furthermore illuminated and can change color, so the dragon can change from green to red almost instantly.

The project connected two traditional types of crafts – glassmaking and metalworking. “In this project, we approached the limits of what is both technically and physically possible. Master glassmakers and metalsmiths brought the know-how of hundreds of years of craft tradition while their work was backed by a high-tech design process throughout,” explains Leon Jakimič, LASVIT’s Founder and President. 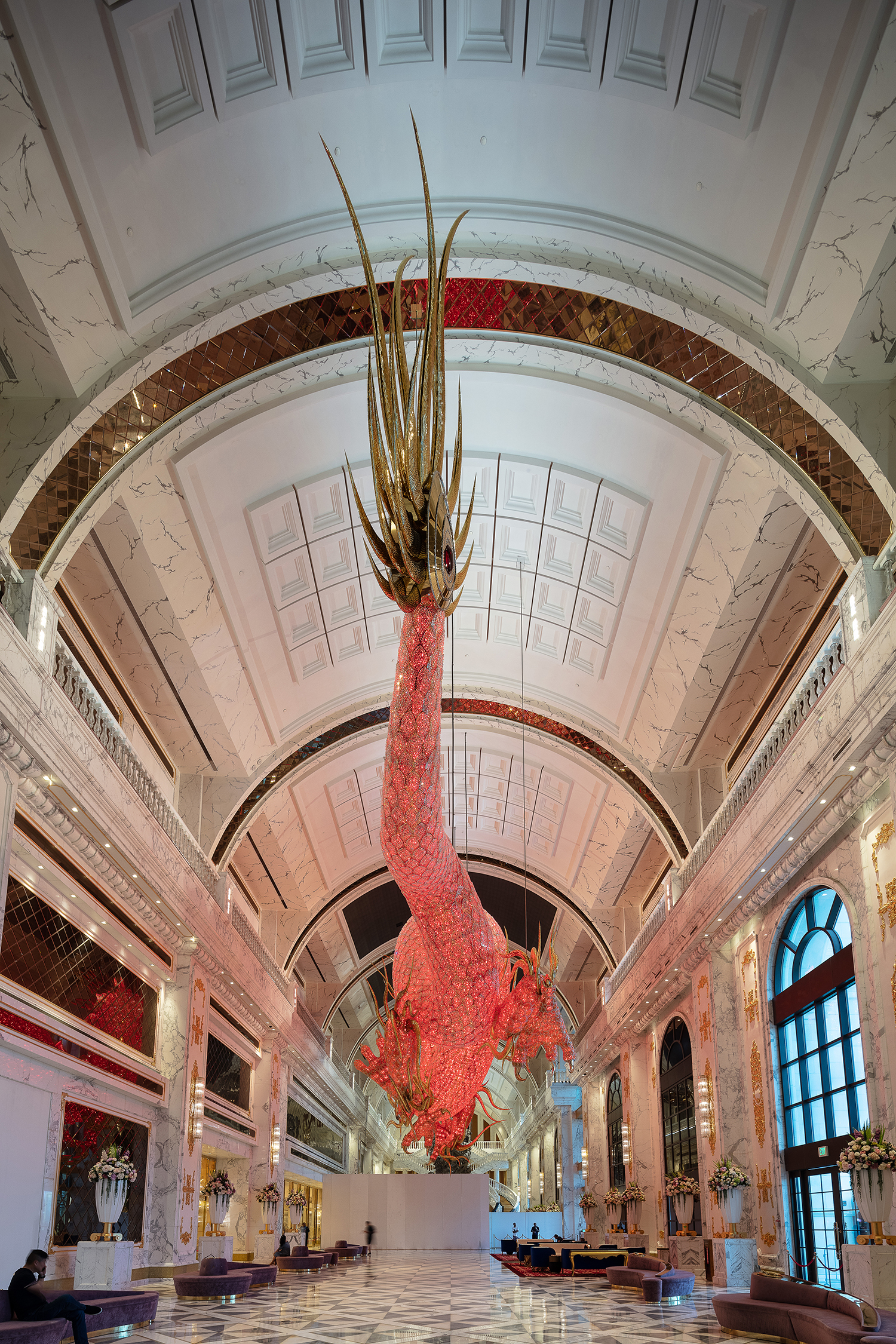 It took more than three years of work for almost all of Lasvit’s departments to make this project happen, and hundreds of employees from Czech Republic worked together to bring it to a successful finish.

The sculpture’s installation required full integration into the building’s design, including adherence to strict building protocols, as Saipan lies within an active seismic zone. The main bearing part of the dragon is made of a stainless-steel truss structure which forms the complete shape and winds throughout the dragon’s body. 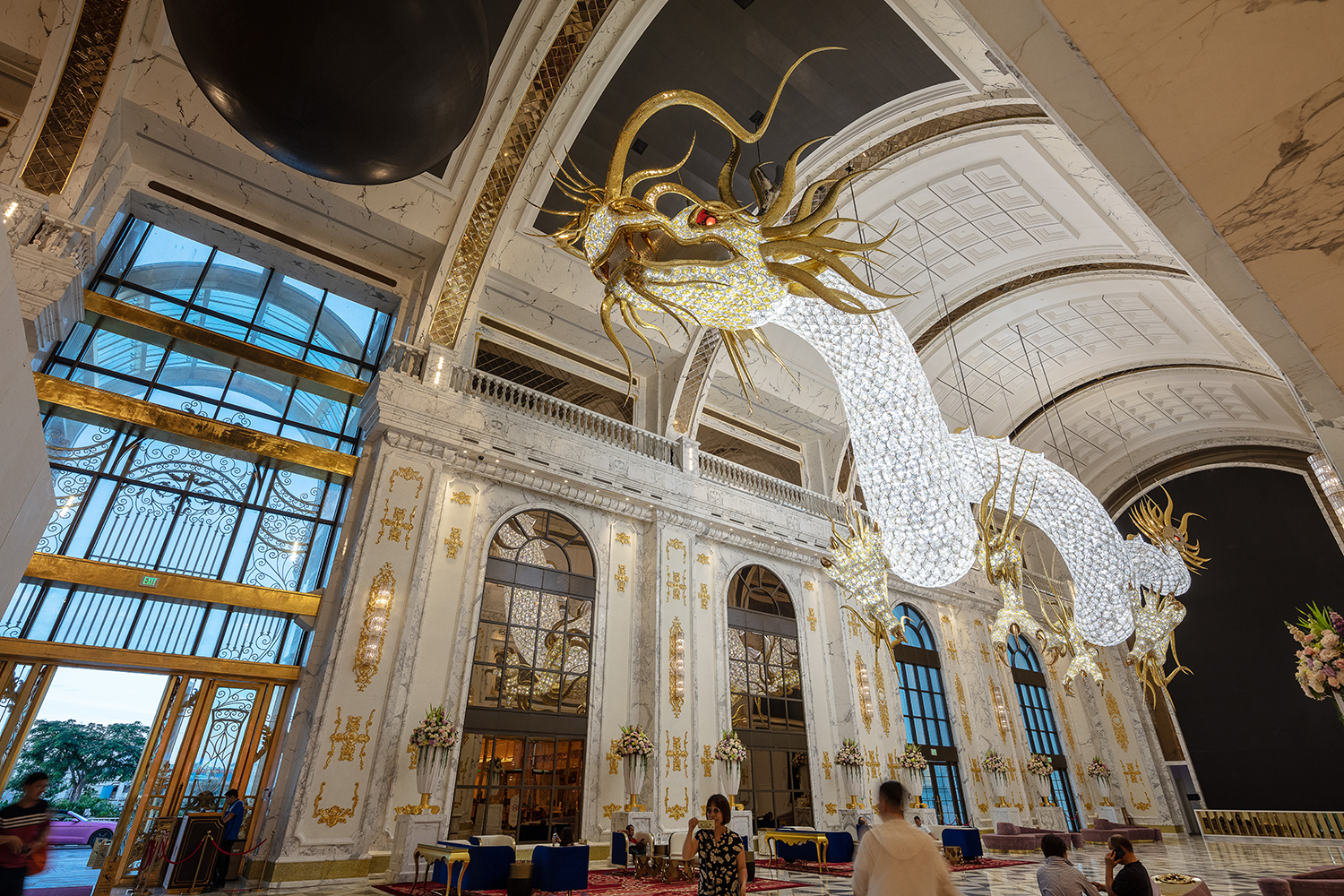 An astounding 13 thousand stainless steel scales fitted with crystals were made to cover the dragon’s body, and Lasvit used over 2,5 million Swarovski crystals to decorate the scales.

While the crystals are beautiful on their own, they aren’t there just for decoration. Provided with RGBW LED chips, the crystals function as a giant screen which follows the shape of the dragon’s body. 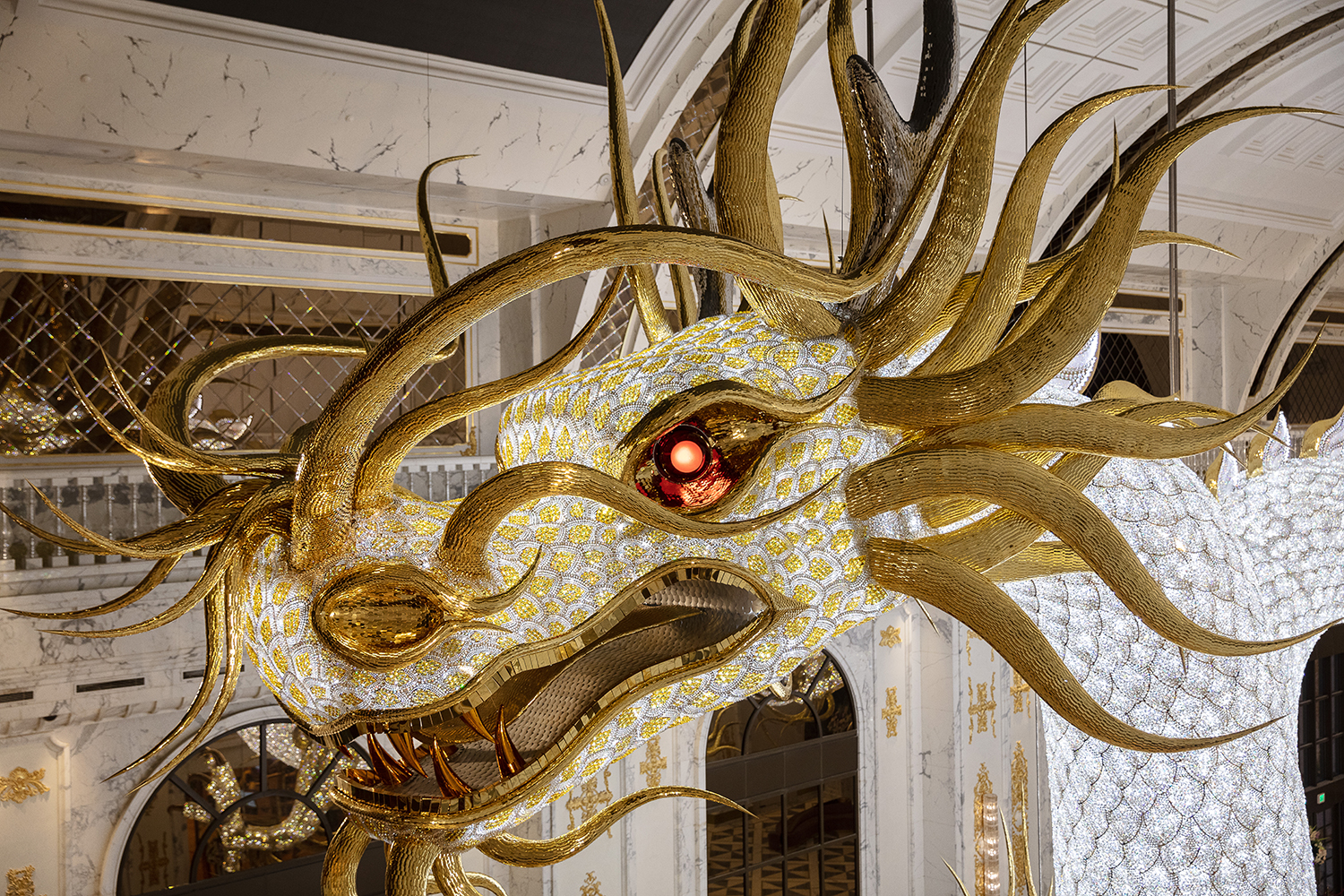 Each light source has four channels – red, green, blue and white, and the light levels on all can be dimmed. While the LED chips light up the body, LED spotlights illuminate the special parts, like dorsal thorns or the tongue. The light can thus travel through the dragon from head to tail and change its colors in any way.

“Light refracts into the rainbow effects typical for cut crystal and is crucial to the Dragons’ visual appeal. Their entire bodies are dynamically-lit by concealed RGBW LED chips that produce a warm natural glow,” says Táňa Dvořáková, who designed the installation together with Adam Kohout and interior designers Steelman Partners, who created the overall design concept for the casino. 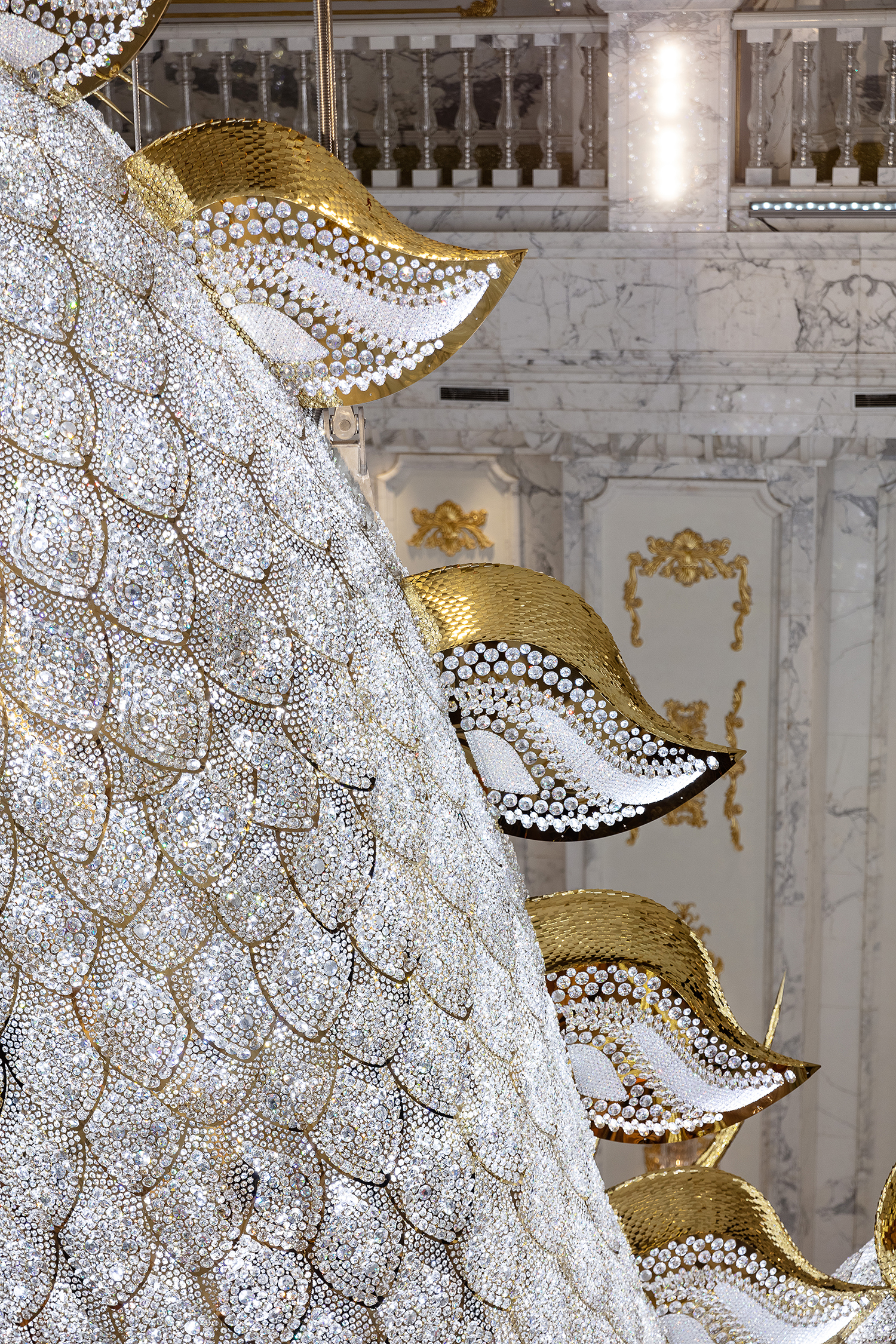 While Bohemian crystal is born out of four elements – wind, fire, water and earth – a dragon embodies the symbiosis of these four elements, and ties them together in one noble and magnificent creature. 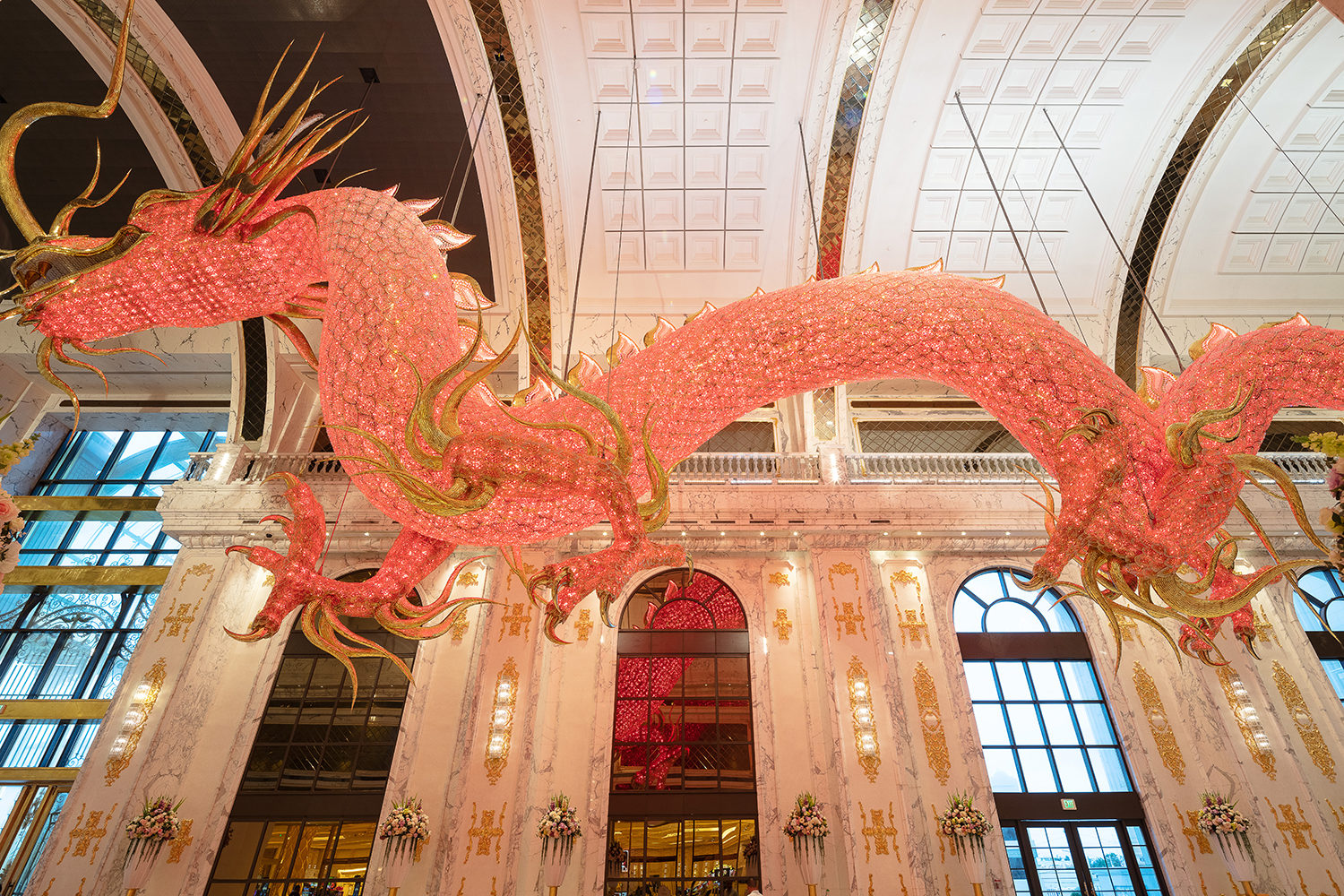 The dragons have five fingers on each foot which bears a special meaning: during the reign of the Qin dynasty, the dragon’s five-clawed dragon was assigned to represent the Emperor while the four-clawed and three-clawed dragons were assigned to the commoners.

Thanks to Lasvit, the Casino now has two dragons worthy of the Emperor. It is a symbol of luxury, but also of deep respect to Chinese history and tradition.