Claudia Pasquero and Marco Poletto, founders of ecoLogicStudio, have designed the Bit.Bio.Bot exhibition at the Venice Architecture Biennale, which invites visitors to taste freshly harvested algae and consider growing it in their own homes.

Within the “As New Households” section of the Corderie dell’Arsenale, the studio has realized a space designed to test the co-existence between human and non-human organisms in the post-pandemic Urbansphere. 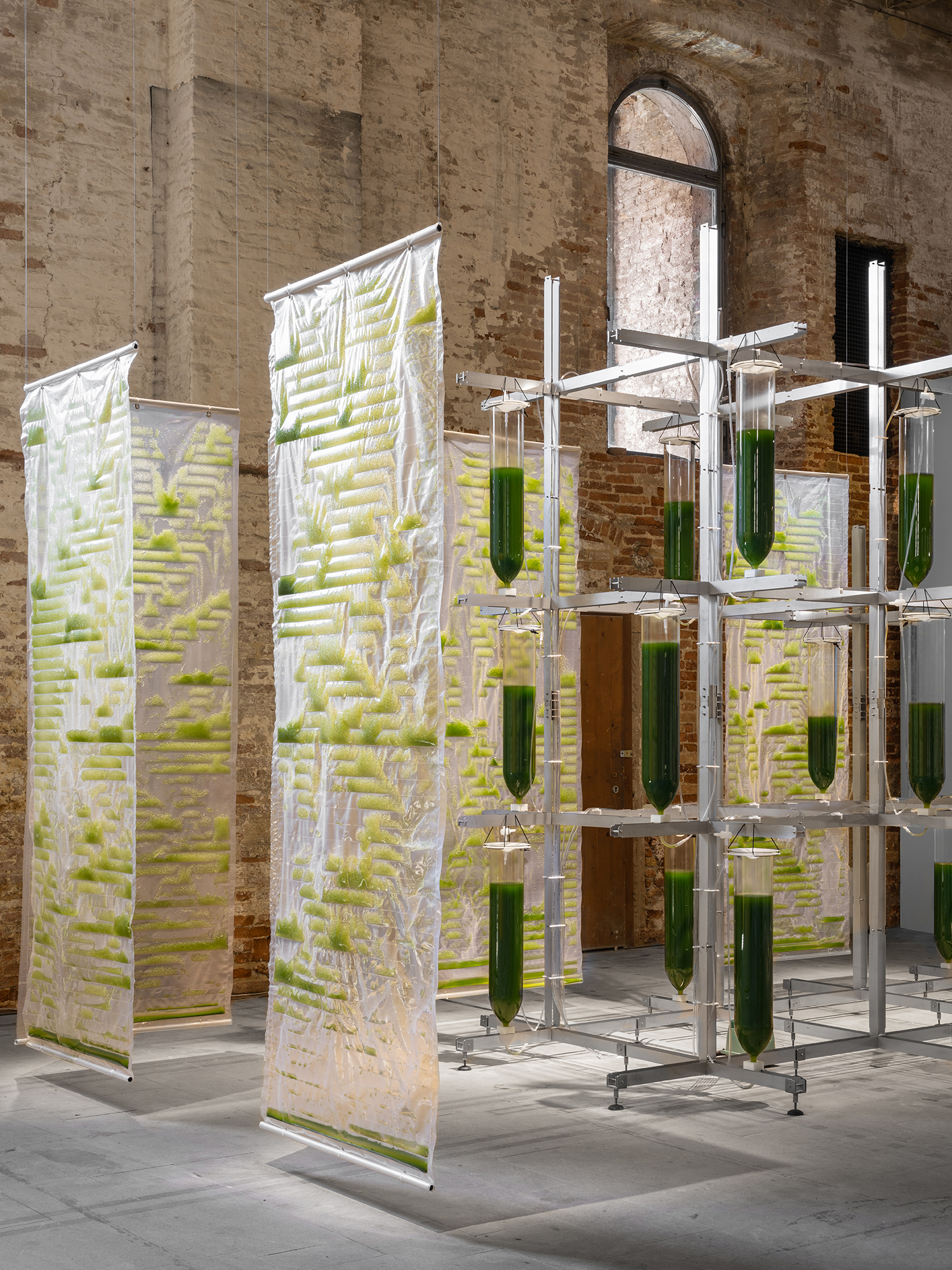 “BIT.BIO.BOT contributes to questioning and re-designing some of the logics which led us to the current health crisis,” explains Claudia Pasquero, co-founder of ecoLogicStudio. “If we, collectively, daily and locally, will contribute to transforming air pollutants and water contaminants into highly nutritious aliments, there will be fewer opportunities for unbalanced viral ecologies to exploit unsustainable food supply chains and polluted atmospheres to reach our organism and cause us harm.” 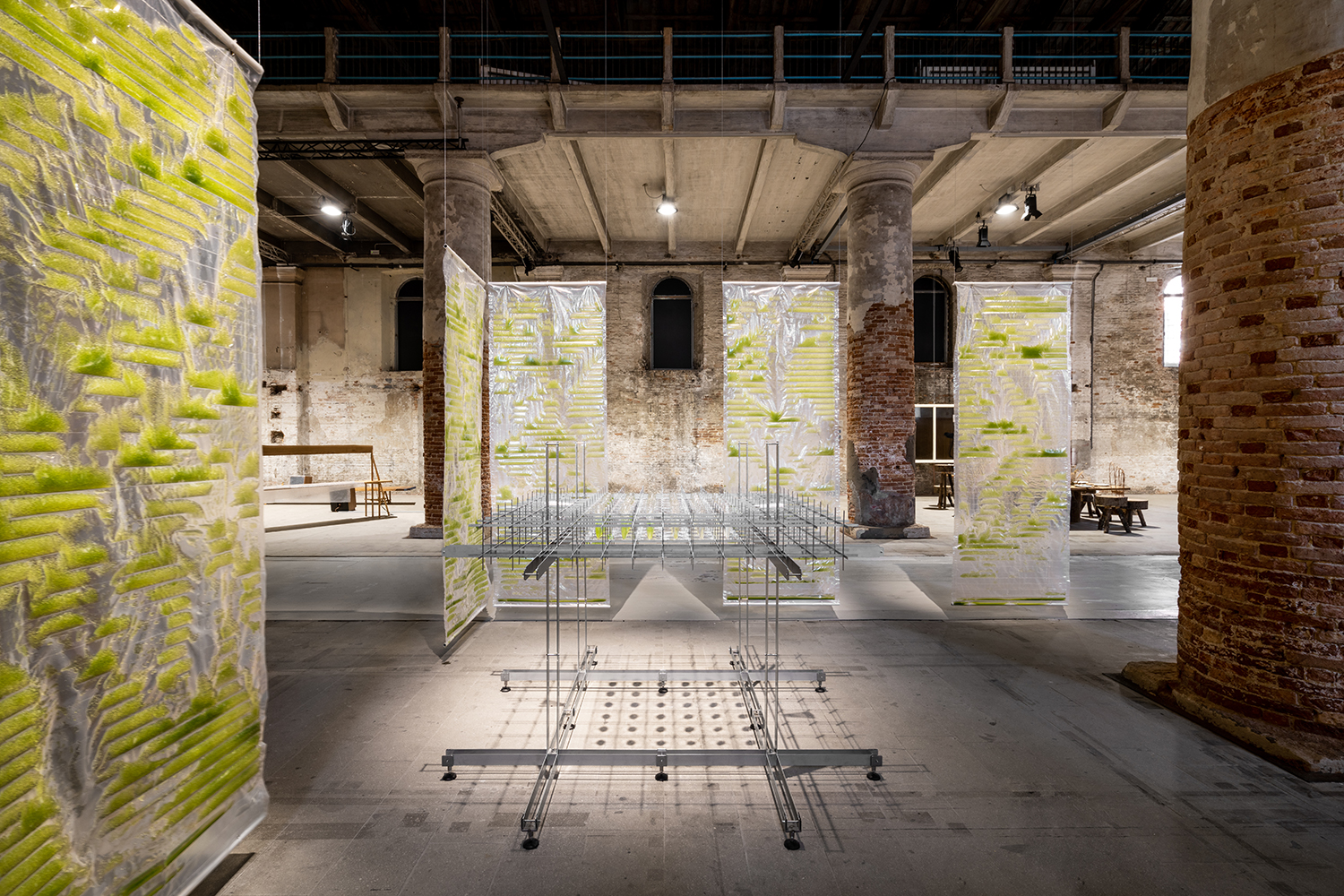 The installation is an urban laboratory that combines advanced architecture with microbiology to build an artificial habitat, managed by a collection of systems which enable the cultivation of microalgae in the urban realm.

The core biological mechanisms of BIT.BIO.BOT is the process of photosynthesis, powered by the sun and by the metabolism of living cultures of Spirulina Platensis, single-celled microbes that are often referred to as blue-green microalgae, and Chlorella SP. These living organisms are among the oldest on Earth, and have developed a unique biological intelligence that enables them to convert solar radiation into actual oxygen and biomass with unrivalled efficiency.

The advanced architectural system on show at the Corderie is the result of 10 years of bio-digital design research, developed by ecoLogicStudio and combining computational design strategies (BIT) with proprietary fabrication techniques (BOT) to implement a collective microbiological cultivation protocol (BIO). 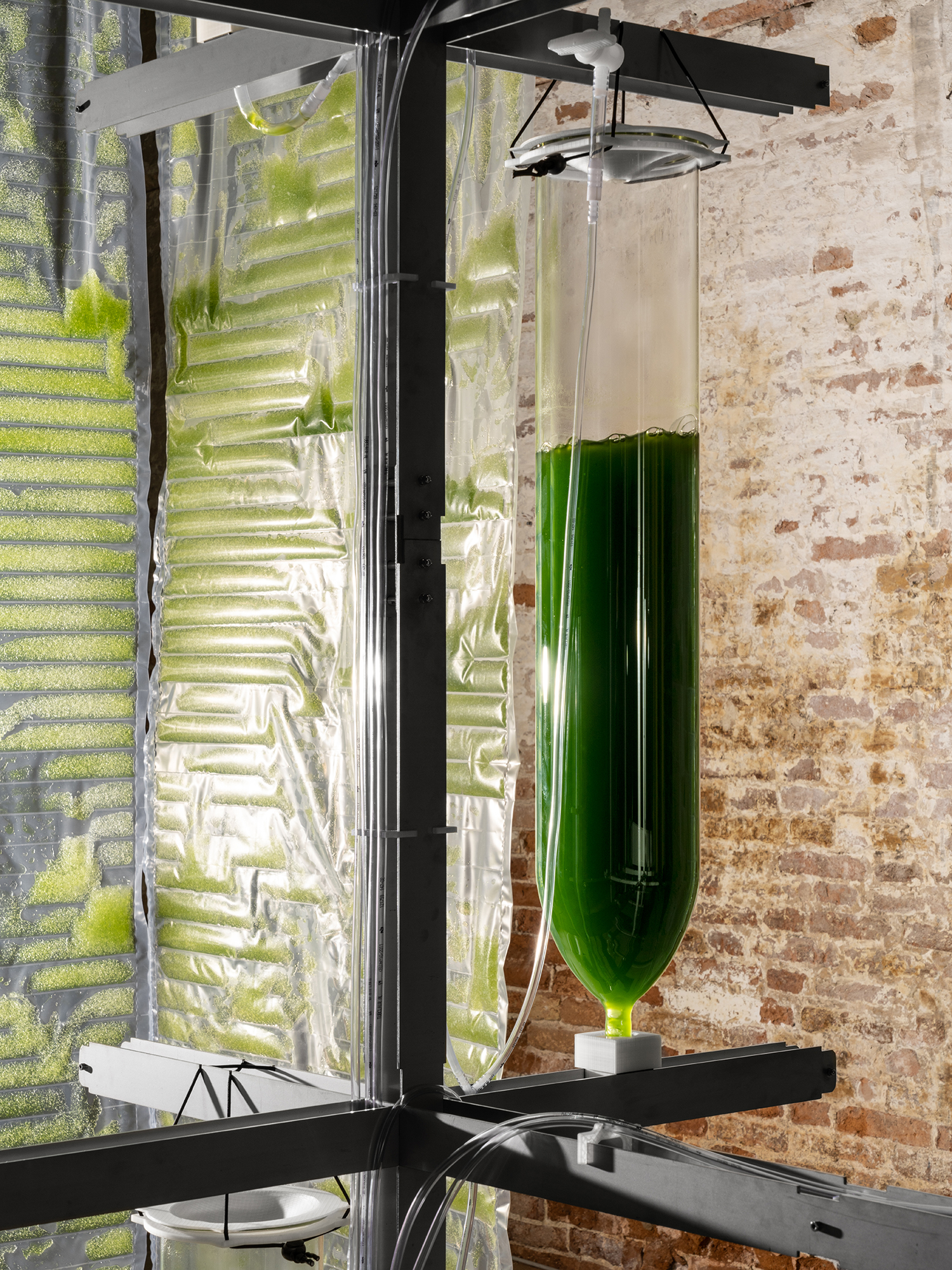 BIT.BIO.BOT is composed of three fluidly interconnected systems that embody the fundamental architectural environments of a future dwelling: the Living Cladding, the Vertical Garden and the Convivium.

The Living Cladding re-defines the limits between human and non-human realms and between architectural indoor and outdoor. It is composed of ten PhotoSynthEtica curtains. The unique version unveiled at the Corderie features a morphological pattern inspired by the surrounding brick walls, highlighting the microbiological nature of the Venetian architectural fabric. Furthermore, its articulation increases the interaction between micro-algae growth in the bio-gel medium, and the environment, as well as their screening and shading potential. Each curtain is three meters high and one meter wide, and features 35 meters of digital welding, which forms a cavity capable of containing 7 liters of micro-algae cultures. 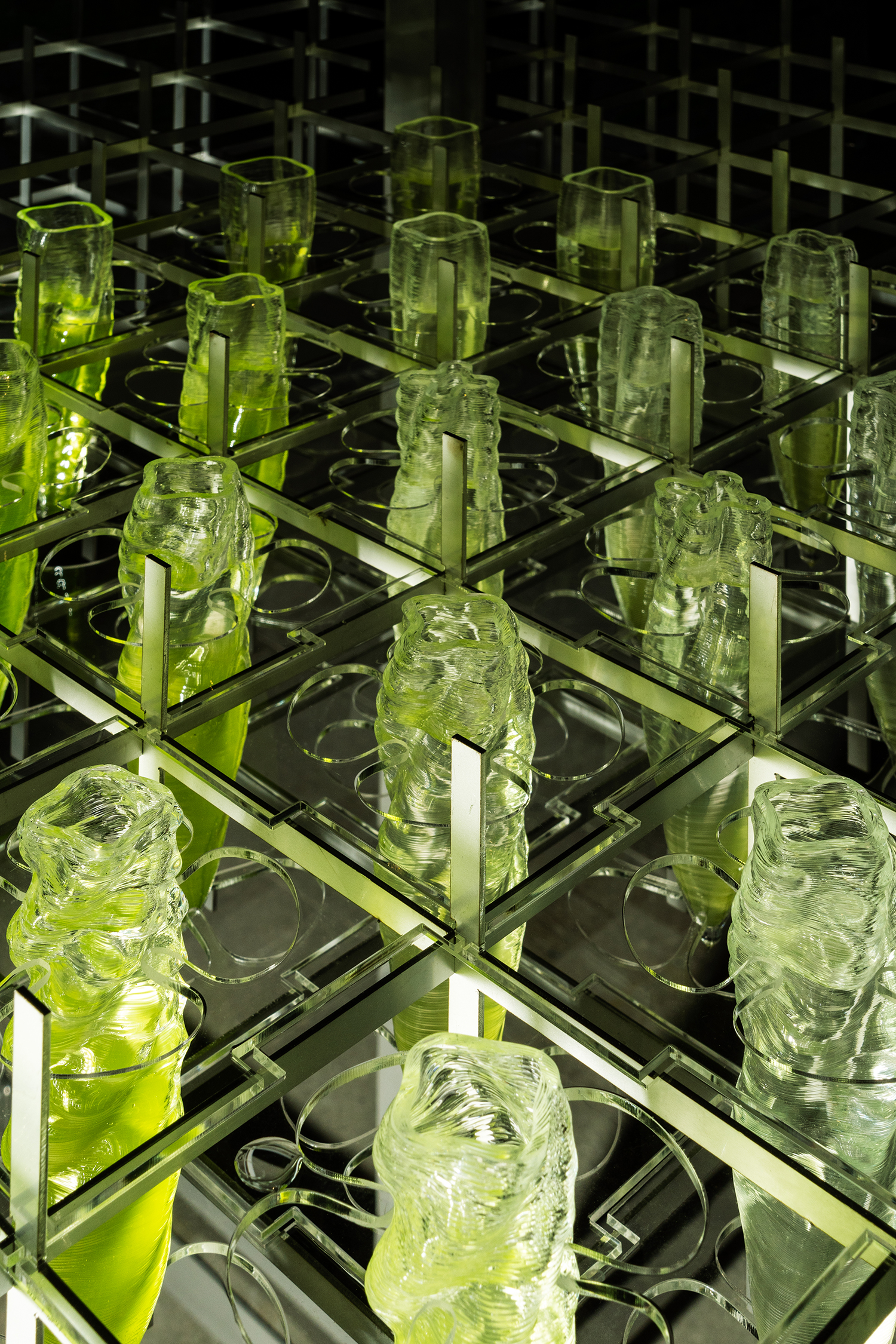 The Vertical Garden creates a thick buffer zone located between the Living Cladding and the Convivium, dedicated to an intensive model of vertical algae farming. On a three-meter tall and completely reversible stainless-streel structure, It hosts 15 Bio-Bombolas – the proprietary domestic algae garden system developed by ecoLogicStudio in response to the challenges of the first Covid-19 lockdown, in Spring 2020.

Each unit of Vertical Garden, made of lab-grade borosilicate glass and 3D printed bioplastic components, hosts 10 liters of micro-algae cultures in a highly efficient growing medium. Algae can be independently harvested from each unit several times per week to collect up to one hundred grams of biomass, which is the daily recommended protein intake of a family of four. While active in production, the Vertical Garden is able to absorb CO2 at a rate equal to three large mature trees, providing a clear path to carbon neutrality in architecture. 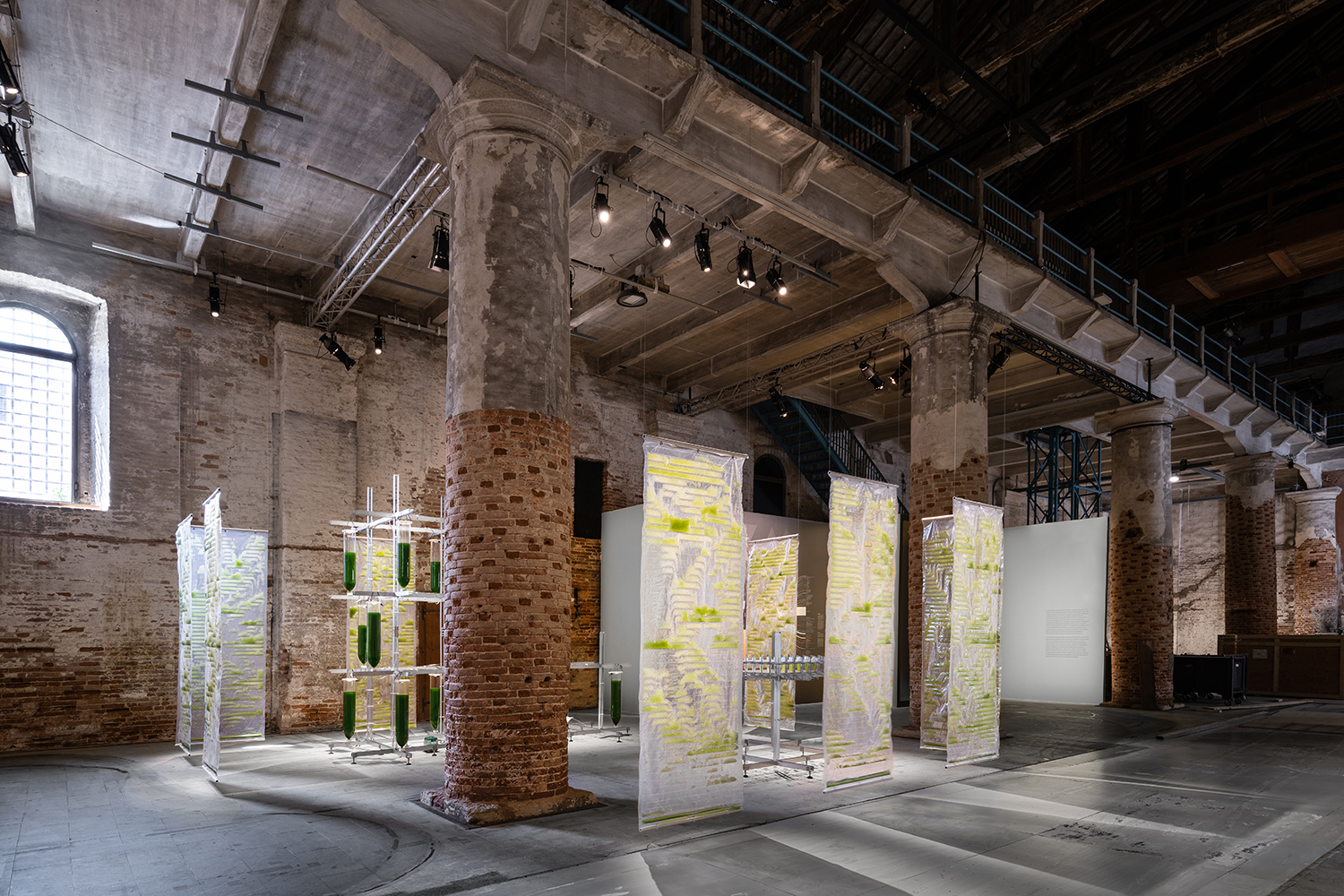 The Convivium is a space for sharing and for collective experimentation on the future of food. It takes the form of a 2 x 2 meter table, which hosts 36 unique pieces of crystal glassware designed to encourage experimentation in the consumption of the freshly harvested Chlorella and Spirulina cells, both of which are among the most nutritious organisms on Earth.

The crystal glassware is designed by ecoLogicStudio and 3D printed by Swarovski with its groundbreaking glass printing technology. Each piece is made of delicately fused glass layers  – arranged in a matrix that algorithmically follows the morphogenesis of micro-algae cells, thus generating a variety of visual patterns. These will offer a multiplicity of opportunities to observe, transform and taste microalgae as part of a new culinary landscape.

“Each phase of the project including its conception, its fabrication, cultivation and post-Biennale re-functionalization, will contribute to this overall experiment in co-existence –  among us humans, and within an extended milieu of non-human systems,” says Dr. Marco Poletto.