Renowned Japanese studio Nendo has designed the spherical cauldron which was the centerpiece of the Tokyo 2020 Olympics opening ceremony. The dynamic, white structure was designed by Nendo founder Oki Sato to align with the opening ceremony’s concept of “All gather under the sun, all are equal, and all receive energy”.

A total of 85 drafts were made out, from flames trapped in a heat-resistant glass sphere to spinning the flames to create a spherical appearance, in order to express the desired resemblance to the Sun. Through trial and error, a spherical form was designed, consisting of upper and lower hemispheres each with five panels representing the Olympic rings.

At the end of the Opening Ceremony of the Olympic Games, the cauldron “bloomed” to welcome the final torchbearer. This expresses not only the Sun itself, but also the energy and vitality that can be obtained from it, such as plants sprouting, flowers blooming, and hands opening wide toward the sky. 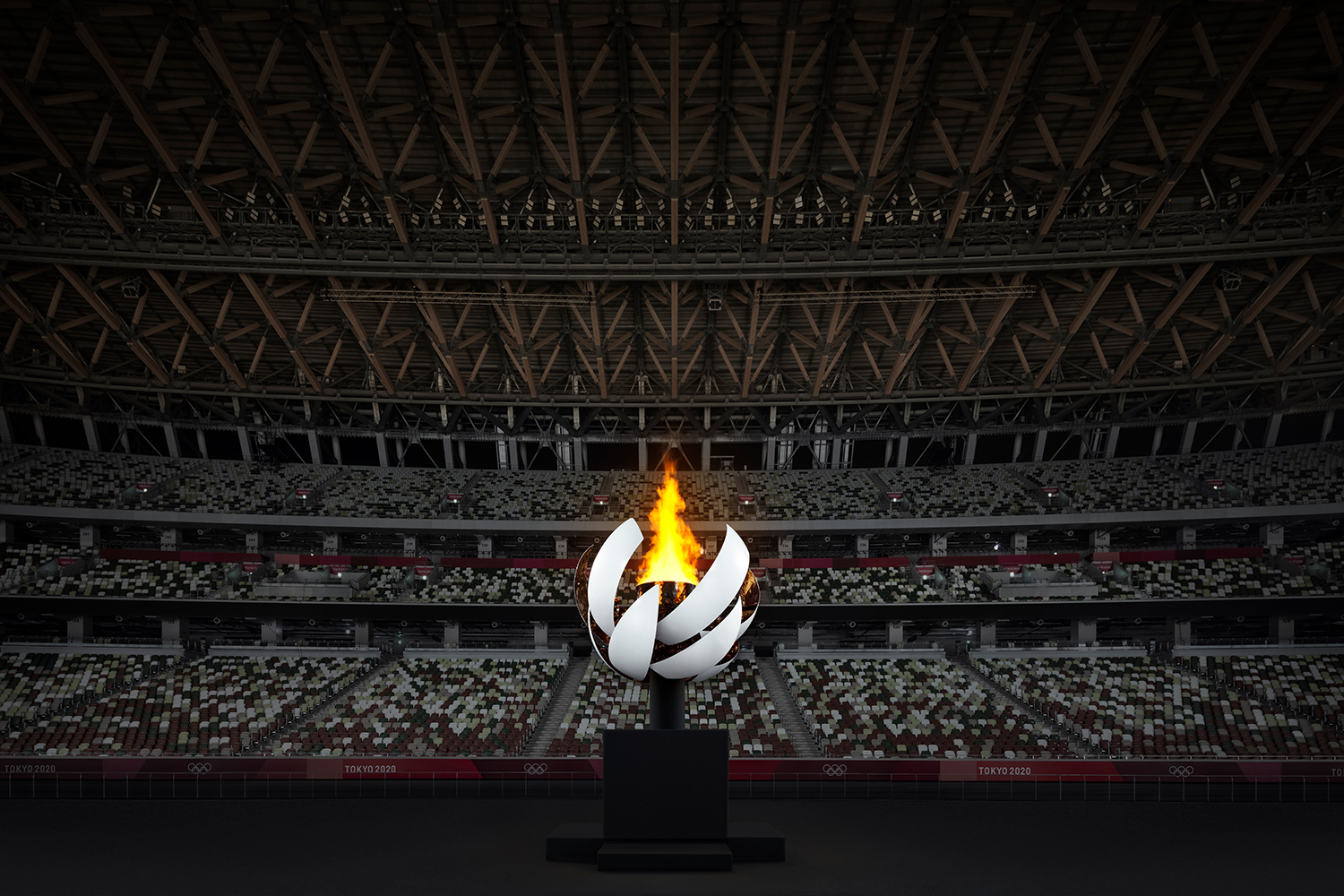 Hydrogen energy, garnering attention as next-generation energy, fuels the flames. The hydrogen was produced at a facility in Fukushima Prefecture, which is undergoing recovery from the Great East Japan Earthquake that occurred in 2011. The electricity required for electrolysis of water in the hydrogen production process is provided by solar power generation. Hydrogen burns with a colorless and transparent flame, and is invisible.

In order to serve as the Olympic flame, it was necessary to be colored by flame reaction, so sodium carbonate was used for the “yellow” flame. The amount and direction of the aqueous solution sprayed from the vicinity of the burner were repeatedly examined along with the amount of hydrogen and the angle of the valve, in order to adjust the movement and shape of the flame to shimmer like firewood was stoked; such an attempt to “design flames” was unprecedented. 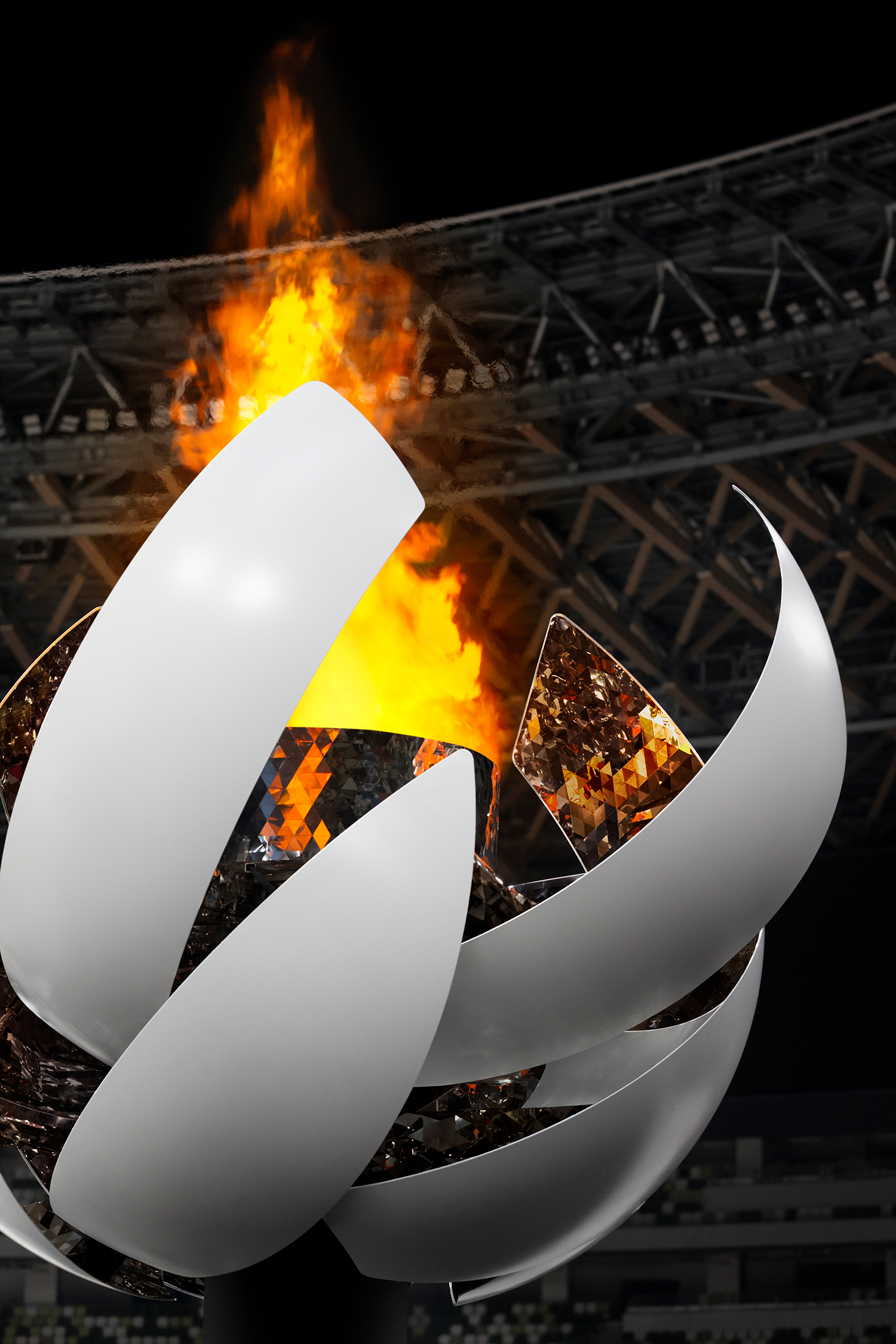 The cauldron weighs 2.7t, and the diameter after transformation is about 3.5m. The exterior panel, which weighs approximately 40 kg per sheet, was made by cutting out a 10 mm thick aluminum plate; molding it with a special hot press machine capable of applying a pressure of 3500 tons, which only a few exist in Japan; and then milling it. Since distortion occurs when heat is applied during milling, the work was performed at ultra-low speed while consistently scanning the shape using laser, shaping up to 7 mm thickness where strength is required, and down to 4 mm where strength is not required, to accommodate weight reduction. The last phase consisted of adjustments, polishing, and application of heat-resistant paint, all of which were finished by the hands of craftsmen.

The internal drive unit was required to be as compact as possible, yet highly waterproof, fireproof, and heat resistant. By covering the machines with polygonal mirror panels as much as possible, it was intended to create diffused reflection of the lighting from the ceremonies and the flamelight. Tests for heat resistance and wind resistance were repeated, and the apparatus was tuned to prevent any vibration or error even under varying conditions. As a result, a smooth movement with fine accuracy in panels passing each other was realized, operating at less than 3 mm distance at the area of narrowest passing width. The Olympic Cauldron thus created through this journey, crystallizes the essence of Japanese manufacturing.