Benjamin Hubert‘s design agency Layer has designed Granule, a collection of exclusive one-off glassworks for Punta Conterie InGalleria gallery in Venice. The collection comprises five large vessels that celebrate the rich tradition of Murano glassworking, which can trace its roots back to the 8th century, and the talent and knowledge of the gallery’s artisans. Each piece is crafted using a variety of different glassworking techniques – including mouth-blowing, casting, sfumato, incalmo, and vetro fuso – to showcase the diverse characteristics inherent in glass as a material. Granule will launch in August during an exhibition at Punta Conterie InGalleria. 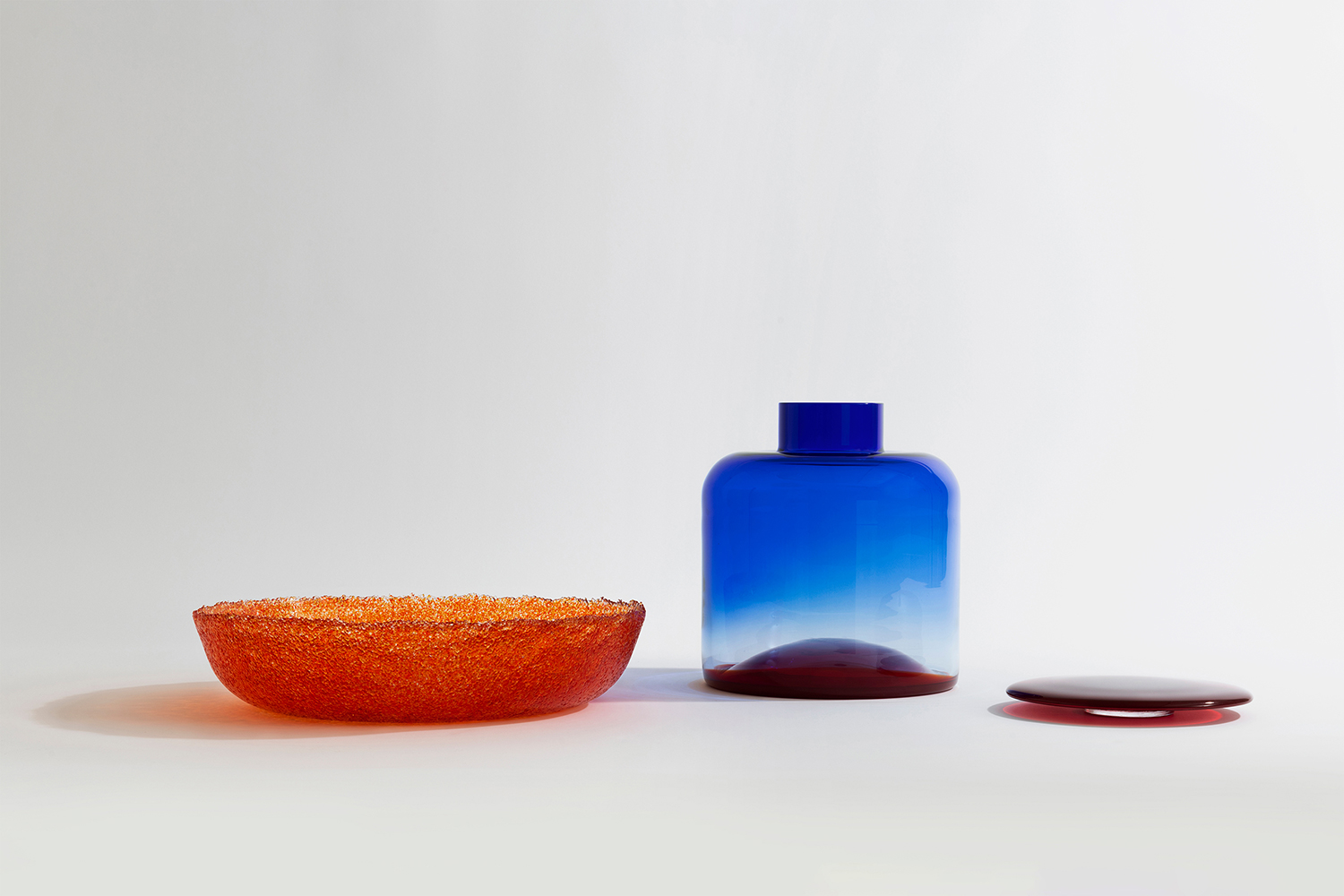 Granule is a celebration of the knowledge and expertise of the Murano glassworkers, and combines a variety of different techniques that can only be achieved by hand in limited quantity. Each of these techniques also expresses a different characteristic of recycled glass, from broken shard granules to blowing to casting.
The base of each piece is smooth blown glass with a seamless gradient of colour crafted using the techniques of sfumato and incalmo; while the top bowl form has a tactile, irregular texture created by fusing granules of glass using the vetro fuso technique. This labour intensive process involves heating the glass granules on a plate to create a fused disc which is then draped into a mould and cooled to form the shape. The bowl and base are then connected – both physically and conceptually – via a frosted cast glass “stopper” that has a visual expression that sits between the refinement of the base and the rawness of the bowl. 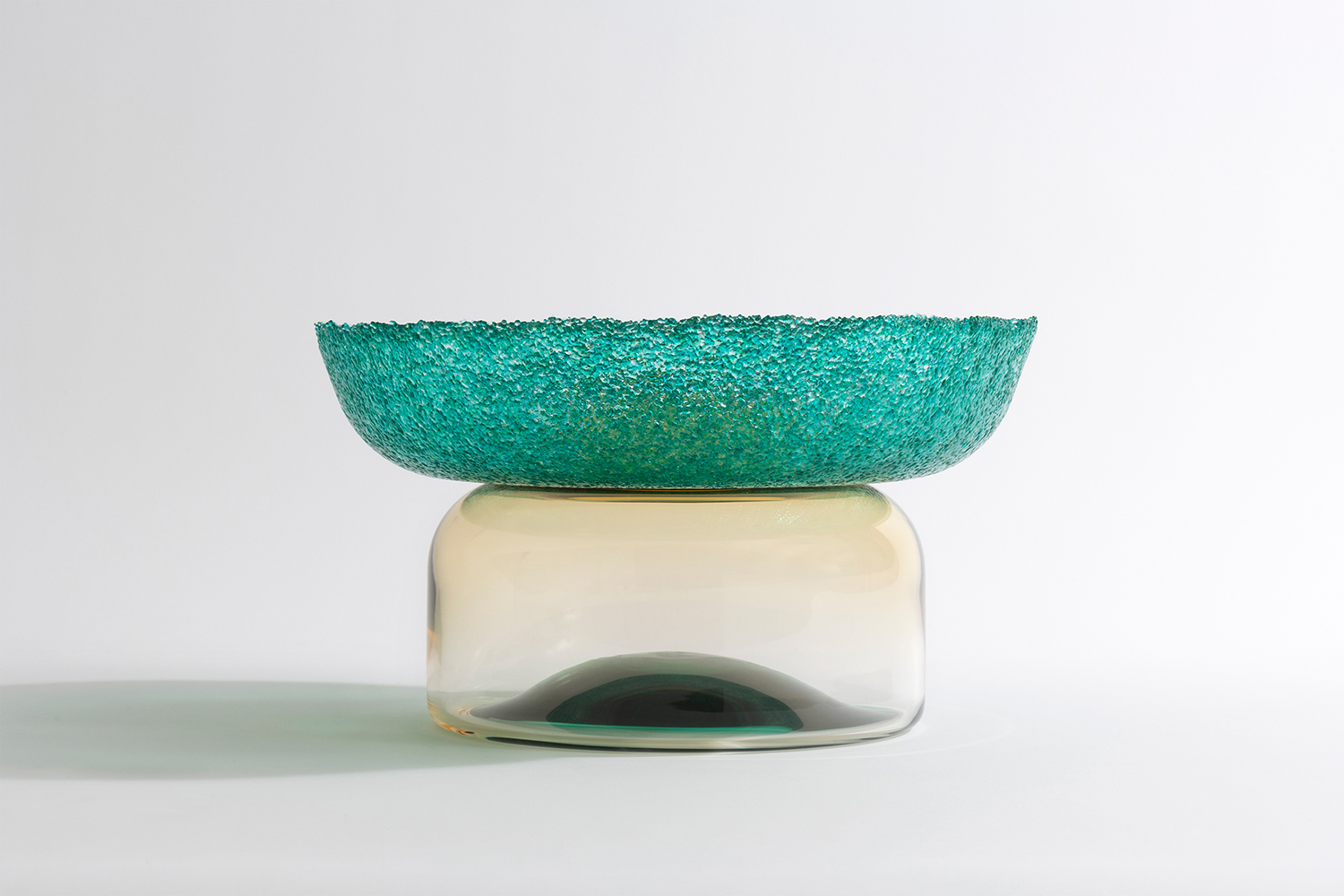 The Granule collection comprises five centrepiece sculptures that are a visual expression of glass artistry. Each one is composed of three elements – a base, a bowl and a connecting “stopper” – that highlight a specific glassworking technique to showcase the craft traditions of Murano. These elements are seemingly balanced together to create an abstract composition.

Crafting the large bowl forms was one of the most challenging aspects of the process, as it was essential that the glass granules were adequately fused to form a “sheet” before being placed into the slumping mould. Another challenge was the precision needed to create a seamless connection between the three elements given that each of the three processes used results in a different level of material shrinkage and variation. 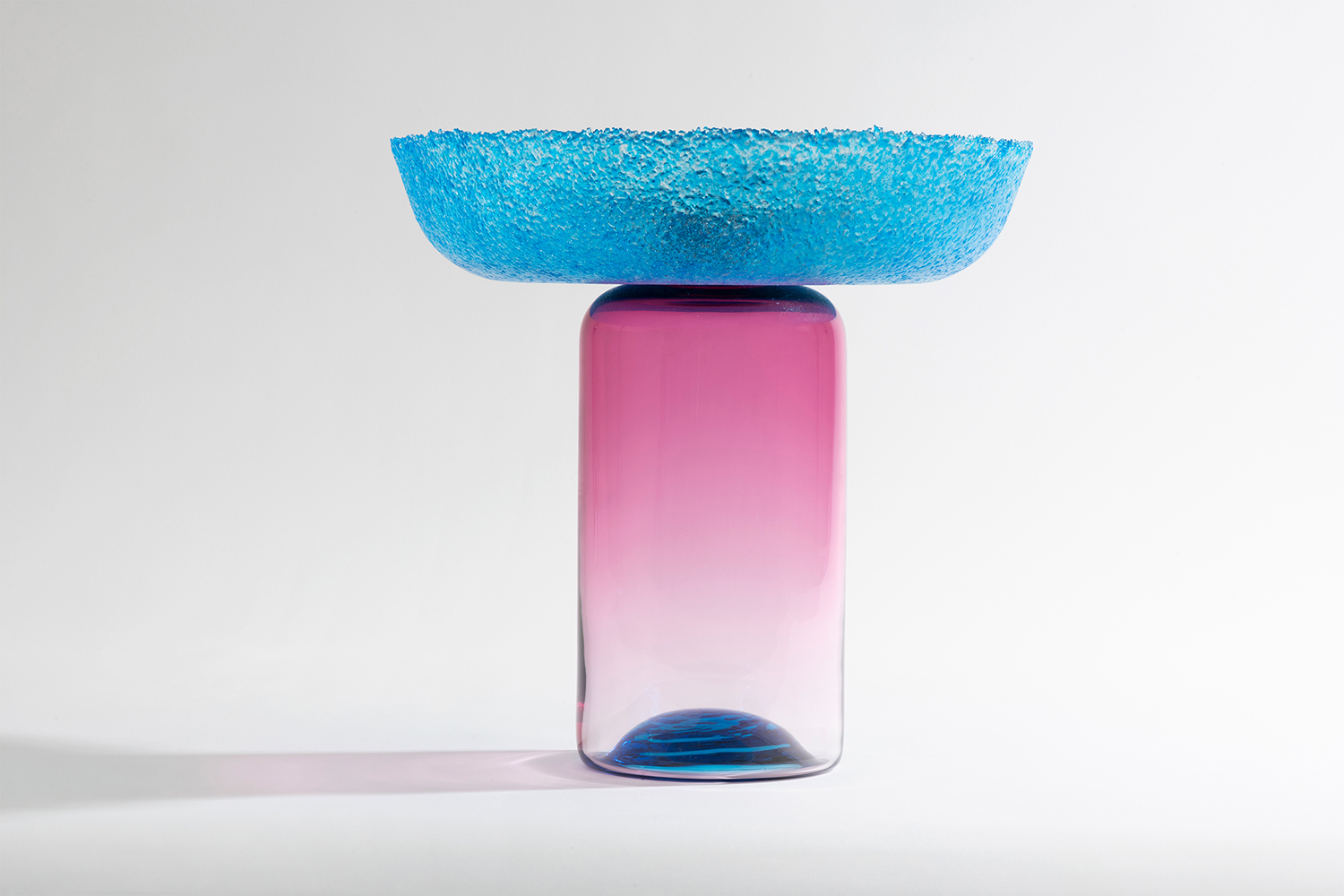 Murano glass is characterised by its bright jewel-like colour, and the Granule collection references this through a playful and expressive use of strong colour. The colour gradient in the base of each piece is achieved using the sfumato technique, a term that originated in painting and means “in the manner of smoke”. This coloured piece is then joined to a clear glass element using the ancient glass-making technique of incalmo—which literally translates to “graft” in the Venetian dialect and results in a highly accurate join—and the glass is then blown into the mould to shape it and create a smooth transition of colour. The colour of the bowl meanwhile comes from the careful arrangement of the glass granules in the initial stages of the fused glass granule process.
The palette of complementary and contrasting colours was chosen for the way it reacts to light passing through the translucent glass. As a result, there is a dynamic play of coloured light and shadow around the sculptural pieces as light changes. 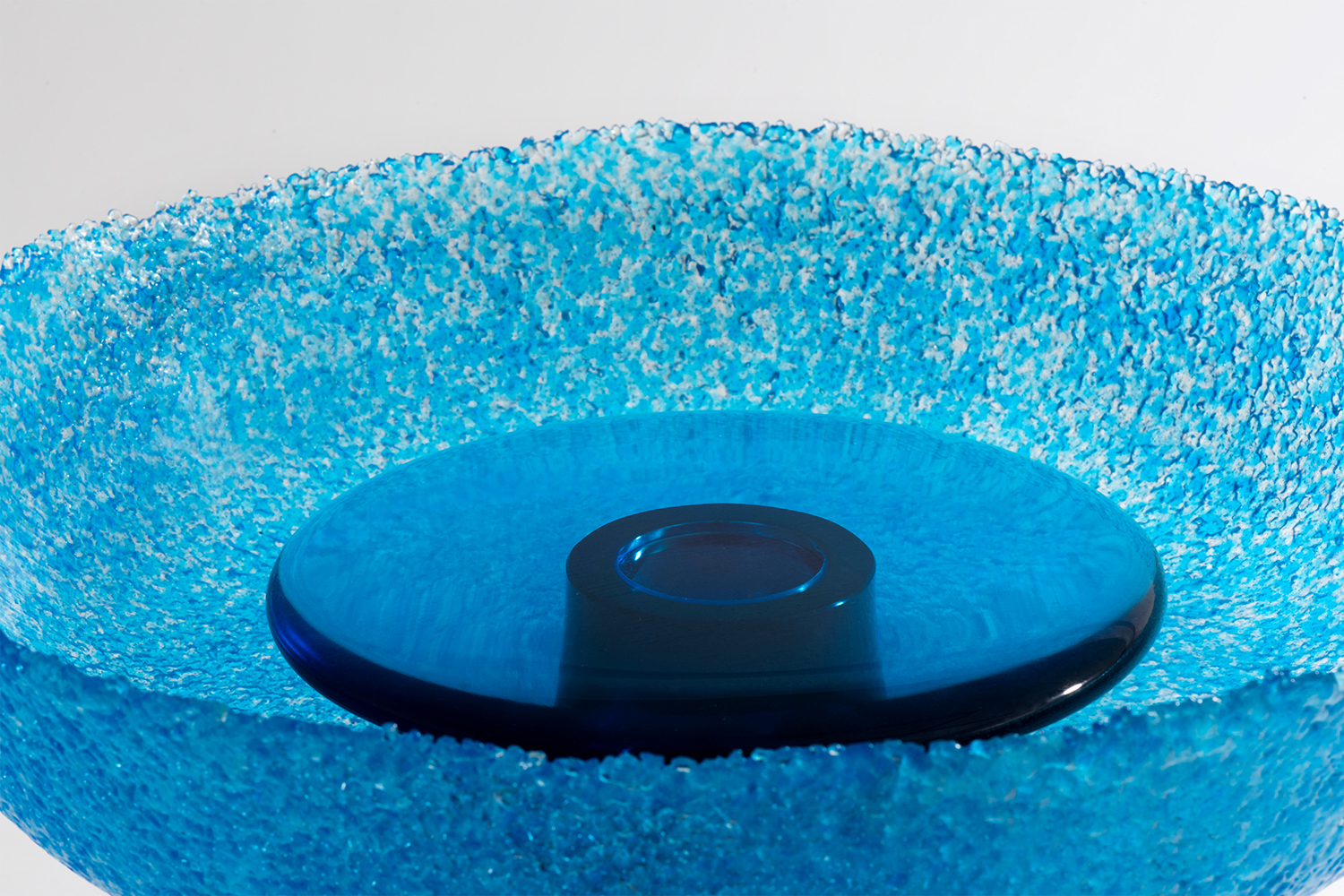 Punta Conterie is a cultural and urban regeneration project dedicated to international creativity and creating links between contemporary and traditional expression, with a focus on design, art, food and wine. Located in the outer perimeter of the former Conterie di Murano, a building that speaks of the island’s industrial heritage, the space was founded by entrepreneurs Alessandro Vecchiato and Dario Campa and opened in 2019. The ambitious cultural hub is home to InGalleria, a space dedicated to temporary exhibitions, a gallery shop, three different restaurants, and the Fiorario Green Boutique. 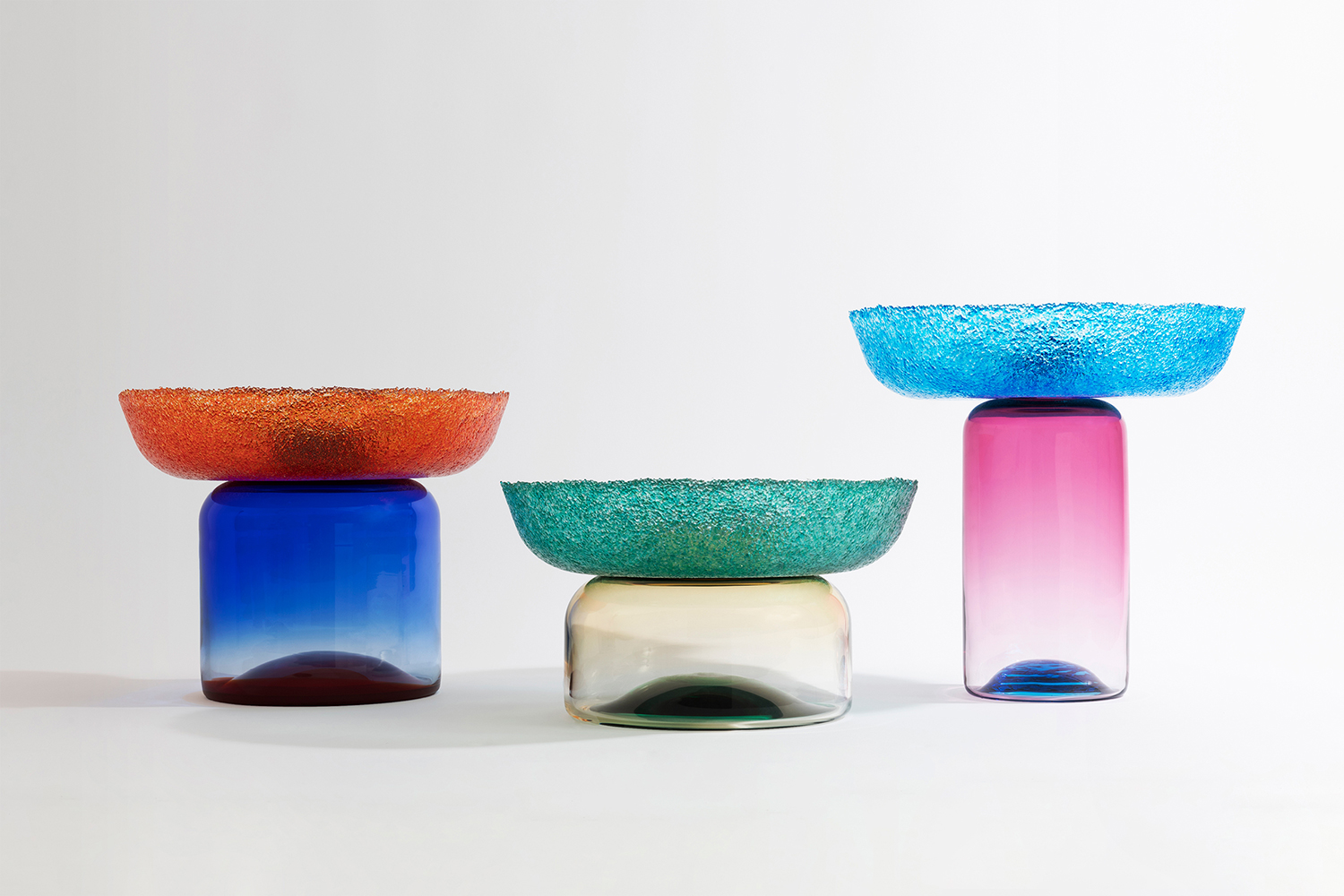 “Murano’s historic glass industry faces many challenges as production has increasingly moved out of Italy,” says Benjamin Hubert, founder of Layer Design. “As a designer, I have wanted to work with Murano’s artisans since visiting the island when I was younger and I believe it’s important to support craft industries to ensure they don’t disappear. This project is about working with the local makers and helping to protect their irreplaceable expertise, as well as a desire to create an expression of the process that showcases the inherent qualities of glass as a material.”