Prolific Japanese studio nendo has designed new fashion and hat floor for Seibu Shibuya, a renowned Japanese department store in Tokyo. “Key to style” is the women’s fashion floor within the main building of the Seibu Shibuya department store. It is connected by a walk-way with the “Compolux” floor on the third floor of the annex building that nendo designed in 2013, and has a more casual feel by targeting the young customer. Oki Sato, founder of the studio, wanted to create a dynamic setting while maintaining the connection with the “Compolux” area that was inspired by a cozy European park. 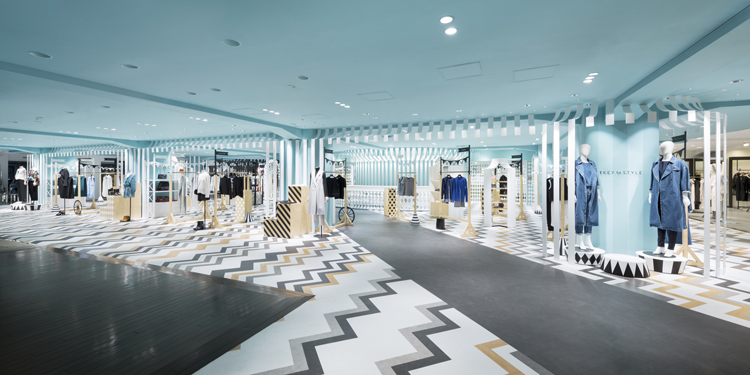 Hence, the design team decided on the “mobile amusement park” that is held at parks as the design theme. The colours are based on a monotone colour scheme, while to add some accent the ceiling was coloured blue and wood was used in some parts, which helps to enhance the colour and the sense of texture of the products. 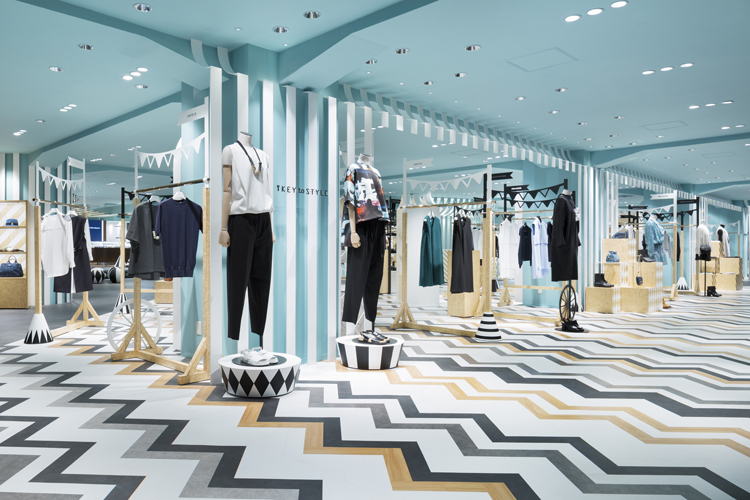 The design of the sales area is inspired by a circus tent, and the collection of the brands are arranged to give the impression of market stalls. The fixtures of the accessory floor were inspired by wagons. 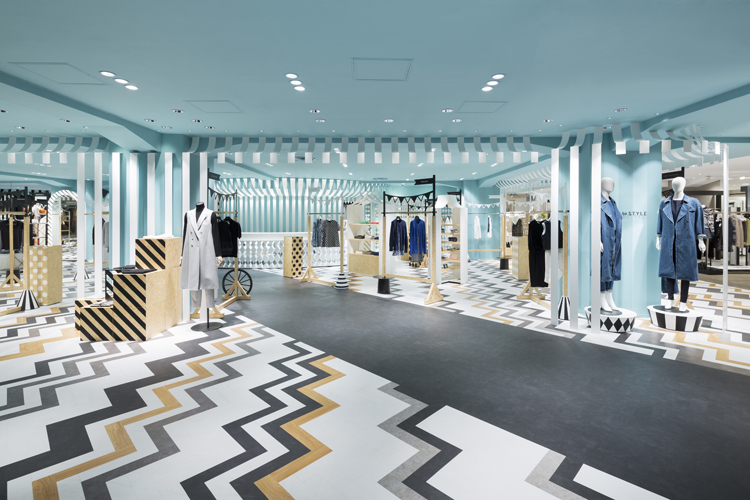 The flooring scheme of the “Compolux”uses grey plastic floor tiles that are laid out in a herringbone style. To follow this scheme, nendo made the same colour change gently using the gradation effect along the passage that connects the annex and the main building. In the “key to style” area the architects enhanced the contrast of the colours of the plastic floor tiles incorporating striped patterns. The sales area surrounds the escalator, around which a circular line is formed for people to walk through. Cross shaped passages that run diagonally were added to this area in order to improve the flow of people and create a line of sight. 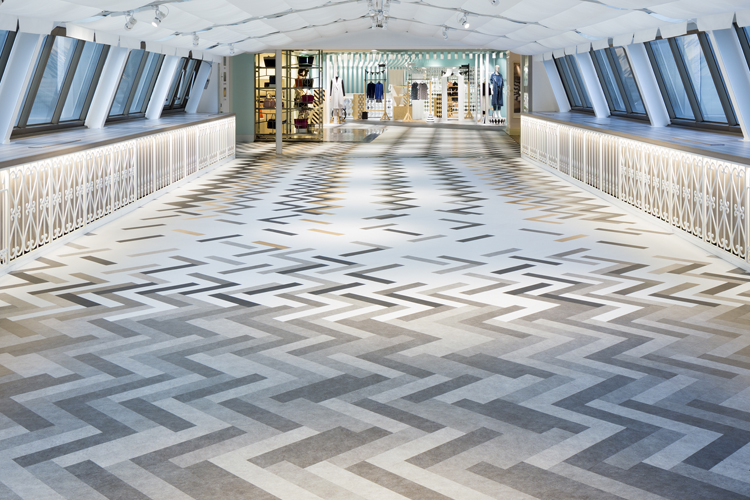 Nendo has also overhauled the women’s hat corner on the second floor of the Seibu Shibuya department store. The women’s hat corner is located in a slightly secluded area, and several beams are protruding from one section of the ceiling. In order to utilize this environment, cylindrical structures are irregularly positioned so as to create the sensation of being enveloped in huge “clouds”. In doing so, the constraints of the uneven surfaces of the space became less noticeable. In fact it allowed the adequate variation of the space with the immediate surroundings, and turned the store into a welcoming three dimensional space. 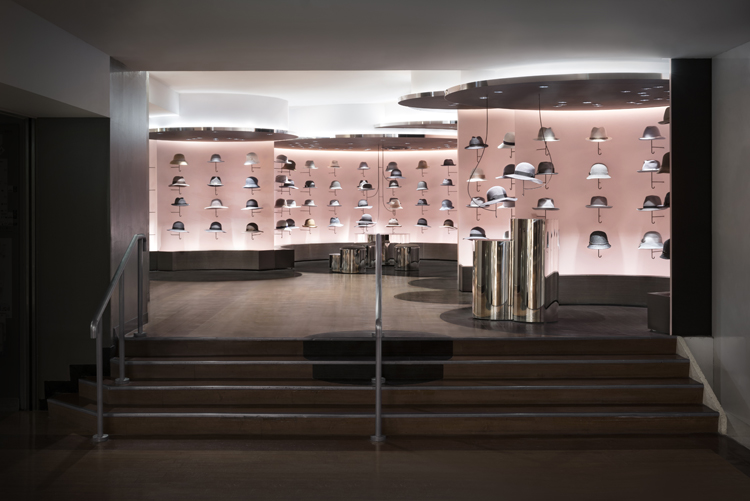 The ceiling heights are varied according to each cylinder, so as not to draw the attention to the beam. In contrast to the overall store bearing the image of huge “clouds”, the individual hats were displayed like small “umbrellas”. 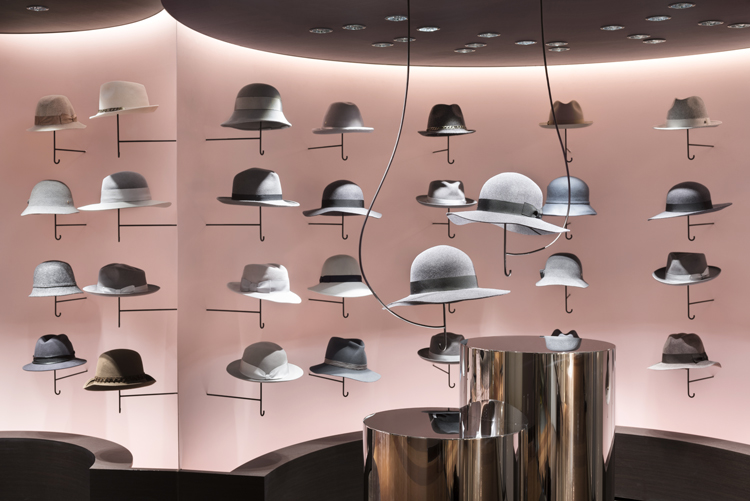 Usually the goods in a hat store are displayed on shelves, and thus was the case with this store, however this time the hats were newly mounted on arms resembling a handle of an umbrella projecting from the wall.  Since hats help avoid the sunlight and protects the head, there is no out of place feeling with the image of an umbrella. 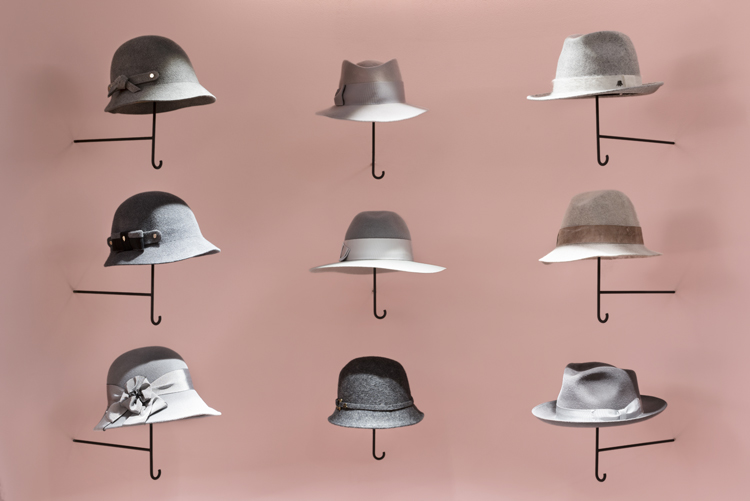 The middle section of the space was turned into a seating area with mirror finish stools and tables, pipes hanging down from the ceiling with hats randomly hooked on like a floating “umbrella”. Additionally, in contrast to the surrounding stores that are designed using conservative colours, the walls were finished in pink and brown hues and wood was used to conjure a warm ambience. 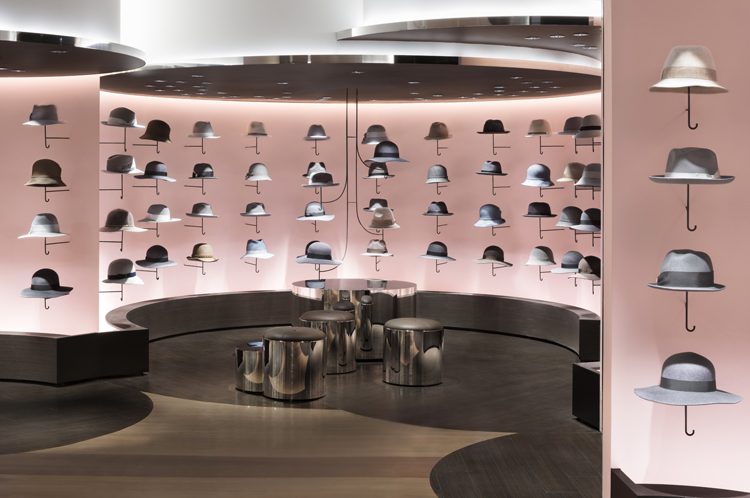