Architecture and design firm ROW Studio has recently completed this sleek and shimmering interior for a barbershop in Mexico City. In a corner space, surrounded by the most important hotels of the city, facing Reforma, the ceremonial boulevard created in the 19th century by Maximilian Habsburg as Emperor of Mexico and across the street from Chapultepec, one of the largest urban parks in the world, stands Barberia Royal.


“Through our design we wanted to incorporate the bits and pieces of a previous proposal that was under construction on the site for a different barbershop that was never finished, recycling mismatching moldings and other wooden elements almost randomly, fitting them in a contemporary form that still references the traditional symbols of European royalty,” explains the design team. 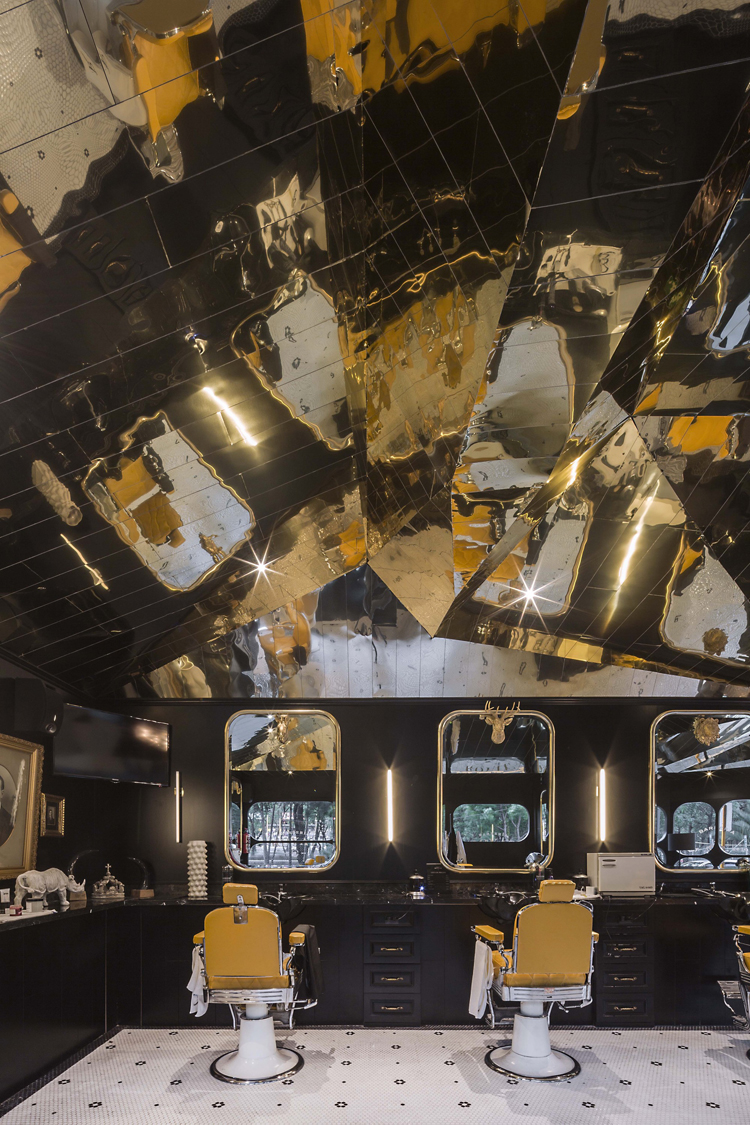 The lower half of the space relates in colors and materials to the long standing heritage of traditional barbershops including a black and white hexagonal tiles floor with a flower pattern and the Royal name greeting all the patrons at the entrance.

In contrast the ceiling is shaped with an intricate faceted surface that adapts to the changing heights of the space and the structural elements of the building finished with a laser-cut golden anodized aluminum reflective surface that mirrors the plan view of the shop and sharpens the edges of the volume creating a point of interest for the clients as they lay back on the service chairs. 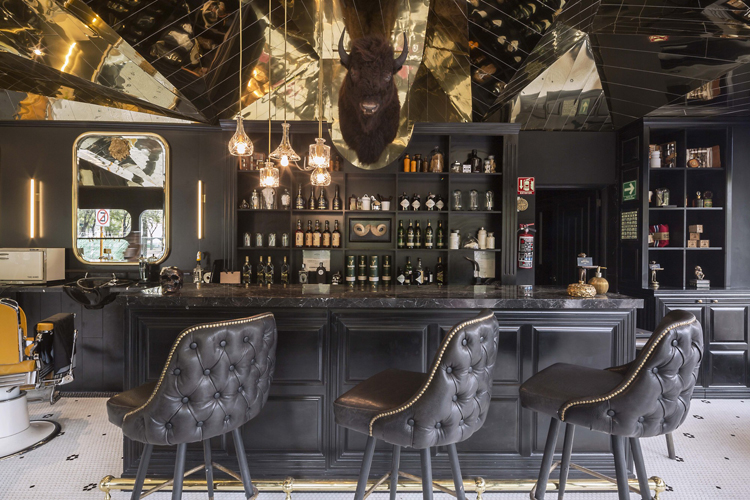 The store is divided into two zones: the waiting area with a fully stocked courtesy bar, very comfortable leathered stools and sofas, shelves with exhibition of the best grooming products for sale that share the space with a real life buffalo head and a fully restored vintage Triumph motorcycle as decorative highlights, and the service area, furnished with original chairs from the 1950s upholstered in mustard yellow facing a large scale beveled mirror with a rounded gilded frame with golden heads of a lion, a wolf, a stag, a zebra, an elephant and a moose fixed onto its surfaces. 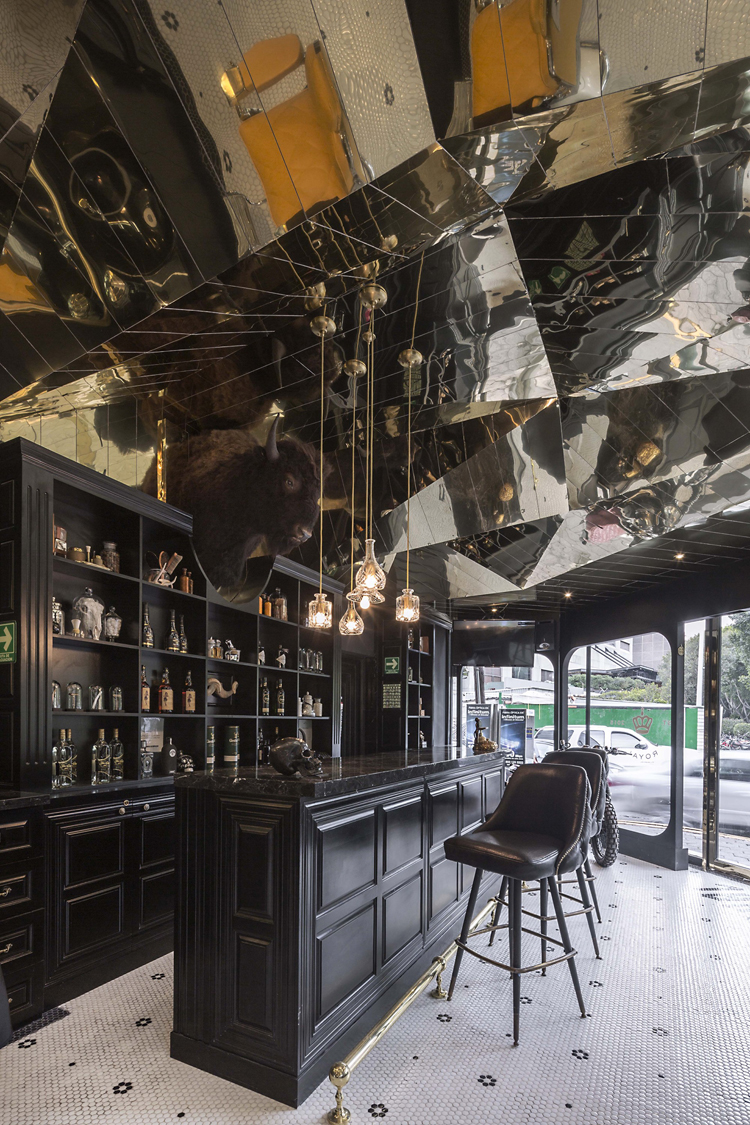 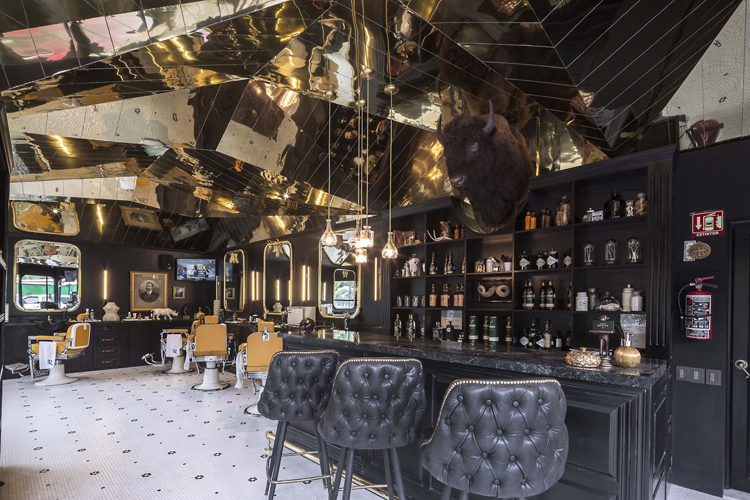 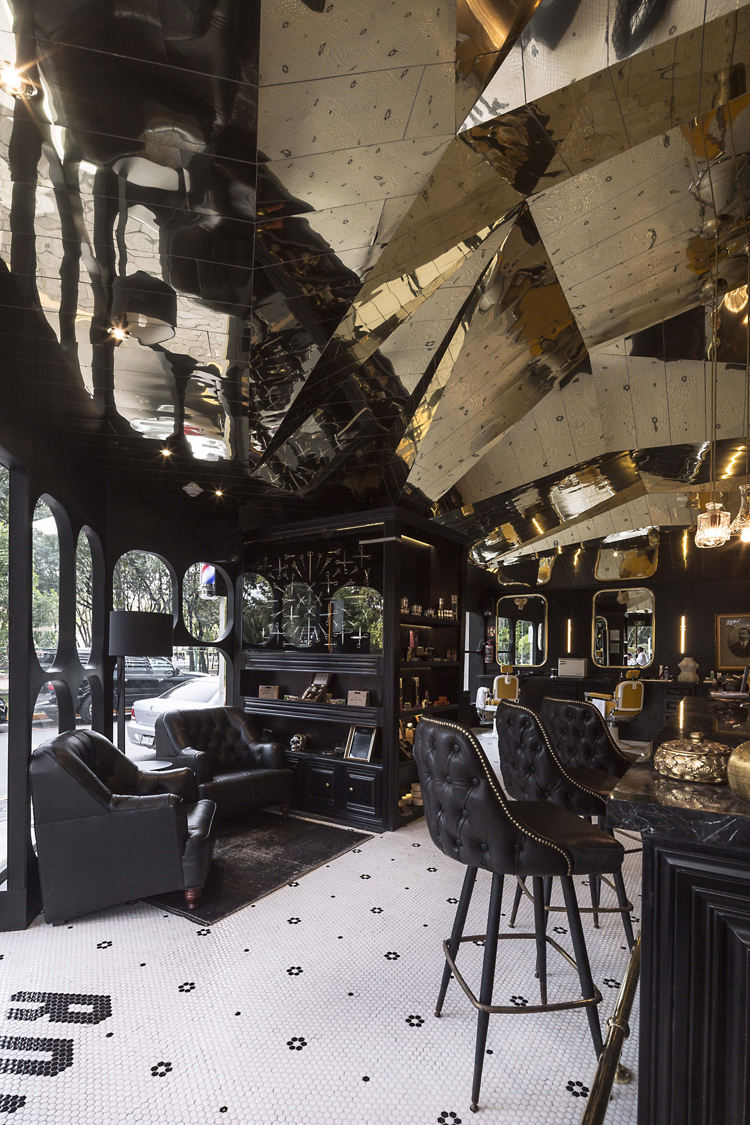 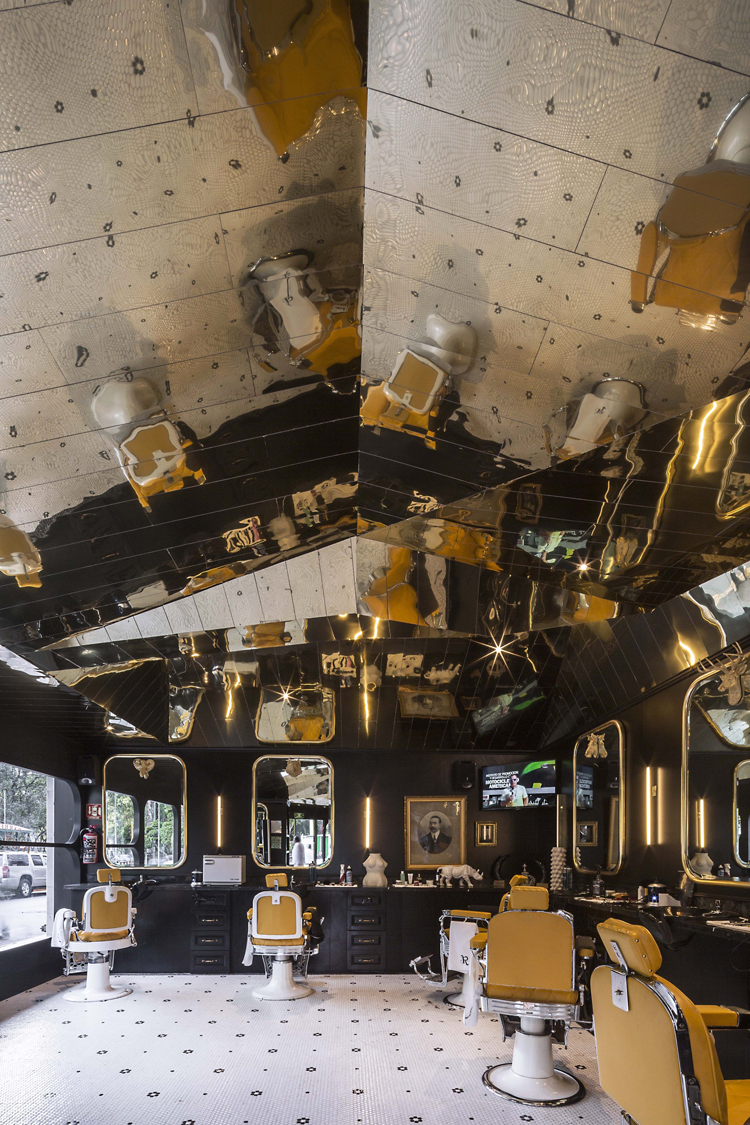 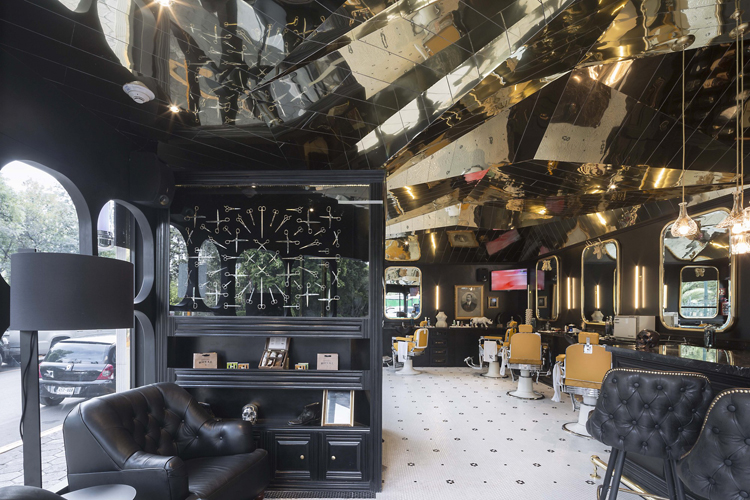 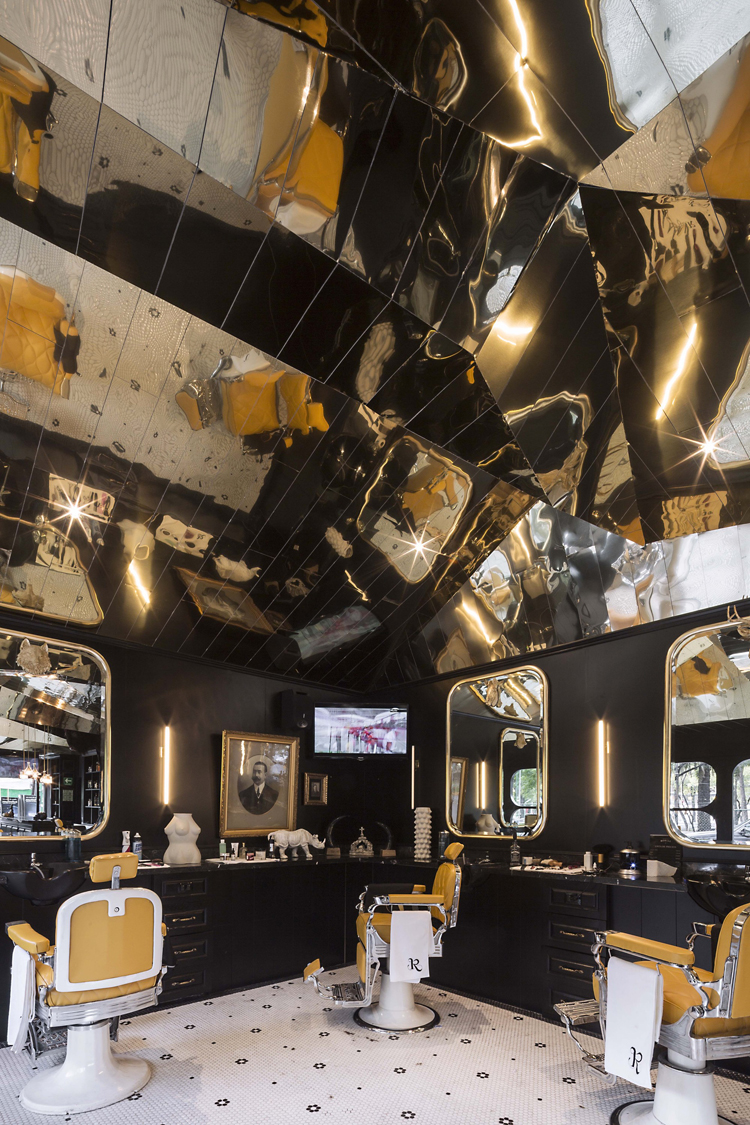 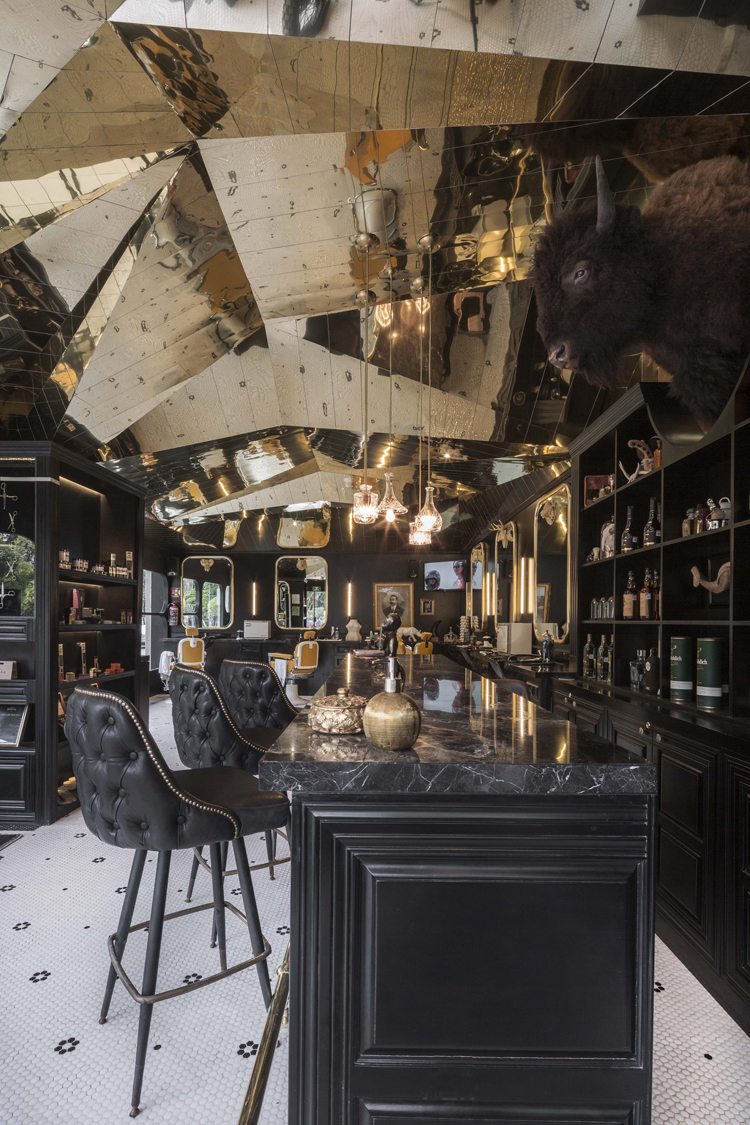 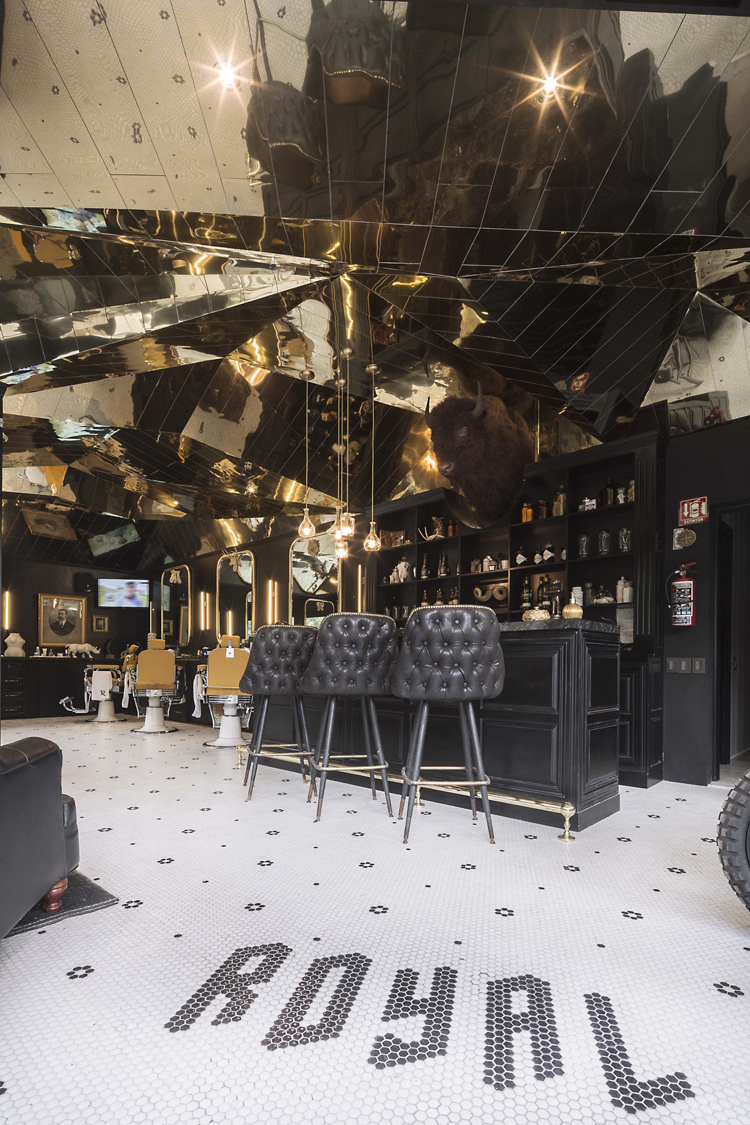