Swiss watchmaker Urwerk introduces the UR-210 in a black platinum version, the most select and exclusive of the UR210s, and as such, irresistible.

The spectacular combination of the revolving satellite complication and retrograde minutes is seen nowhere as in the UR-210. The prominent three-dimensional minutes hand acts as a high-tech cowling that encloses the hours and carries them in turn smoothly across the scale of minutes. When the end of an hour is reached, the flyback function jumps into action at rapid speed — less than a tenth of a second — and returns the hand to zero to begin the next hour, which is indicated on one of the revolving satellites. 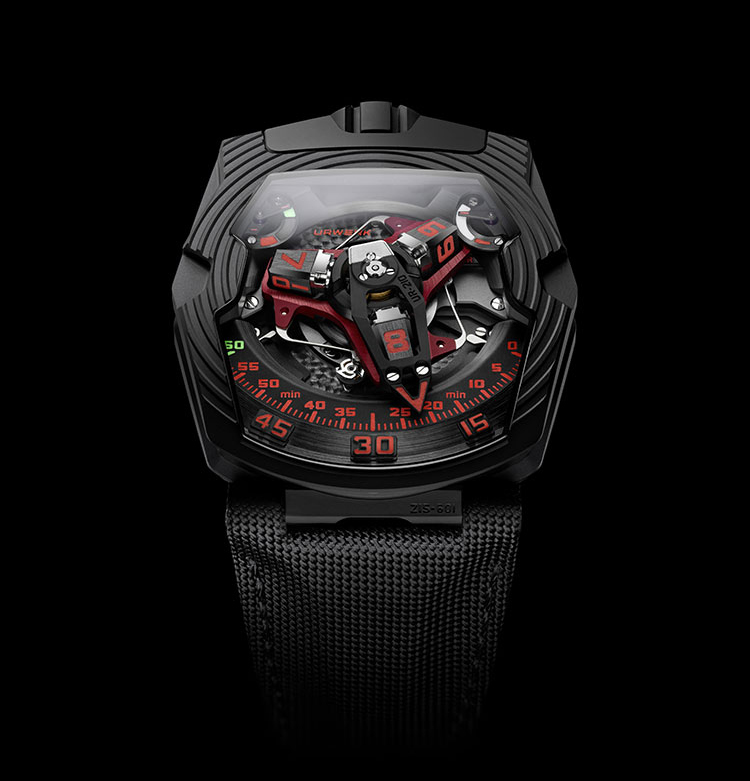 At the heart of this system is a central hub, turning on ruby bearings, that ensures that the mechanism remains stable. It uses a cylindrical spring of the type used in marine chronometers along the shaft to accumulates the power for the retrograde action. This minutes hand has uncommon dimensions, machined to the hundredth of a millimeter and measuring 22.29 mm long, 8.03 mm wide 7.3 mm high and weighs only 0.302 grams. The main part of the hand is in aluminum, while its counterweight is made of brass. A star-shaped, double coaxial cam governs the retrograde action; its gearing and then its rotation determine the trajectory of the minutes hand. 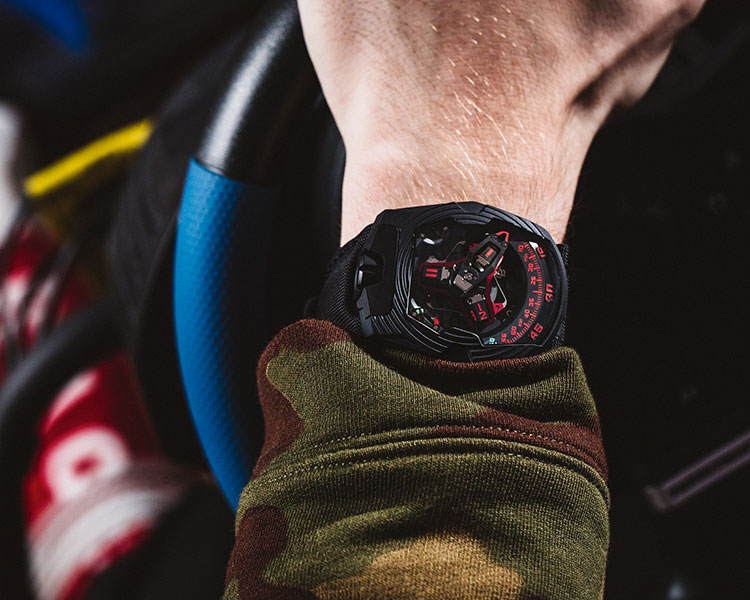 The case of the UR-210 black Platinum appears to have reacted to the force of the fly-back minutes, developing a series of regular shock waves radiating from the dial. An allegory has become reality. “We’ve added an extra tactile dimension to a 3D watch,” explains Martin Frei, URWERK’s co-founder and designer “The rotations of the hours satellites are replicated in the metal of the case. As if we had created a shockwave powerful enough to displace matter and bend platinum. The deep furrowed arcs also accentuate the smart hexagonal design of the case.” 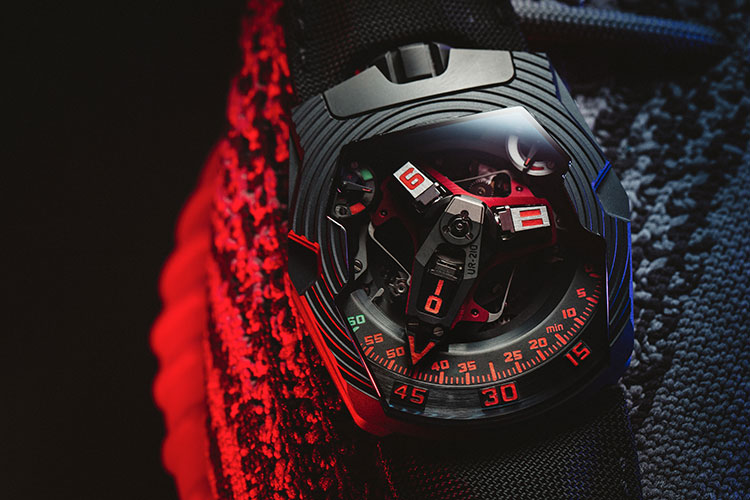 The dial of the UR-210 also features a conventional power-reserve indicator at 1 o’clock. Opposite, at 11 o’clock, what appears to be a similar indication is in fact very different because it shows the winding efficiency during the last two hours. This device — a world first — calculates the energy flow, or the ratio between the energy generated and the energy consumed. Contrary to a torque indicator, it doesn’t depend on the tension of the barrel spring.

Are you sitting comfortably, not moving much? Then the hand of the winding efficiency indicator will move inexorably towards the red sector. When it’s workout time, it will move towards the green, showing more energy is being created than consumed. 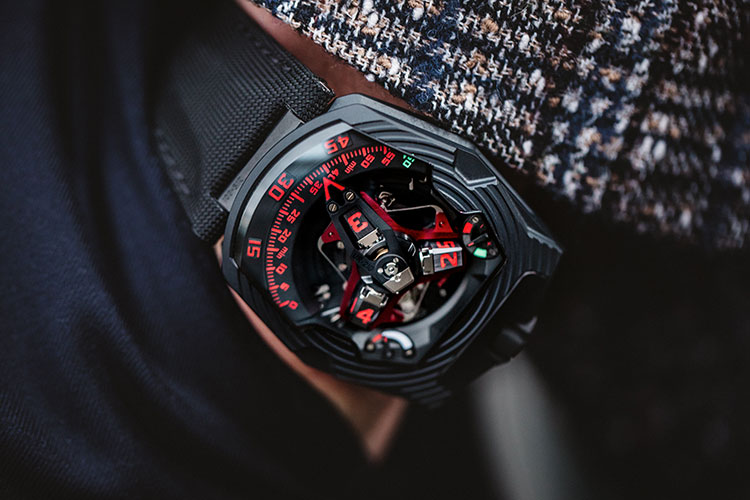 Knowing the winding efficiency of your watch enables you to adjust the winding rate. If your UR-210 shows that not enough energy is being generated, you can turn the winding rate adjuster on the back of the watch to FULL. The winding rotor then becomes sensitive to the slightest motion, converting it into pure energy. The rotor is connected to a turbine that ensures an optimum winding rate while dampening shocks. If your activity creates too much energy, turning the adjusting wheel to REDUCED absorbs some of that energy to prevent unnecessary stress on the mechanism. A turbine mounted on ruby bearings starts to spin, acting as an air compressor and creating a resistance that slows down the winding rotor. In the STOP position, the self-winding system is disengaged and the UR-210 becomes a manually wound watch. 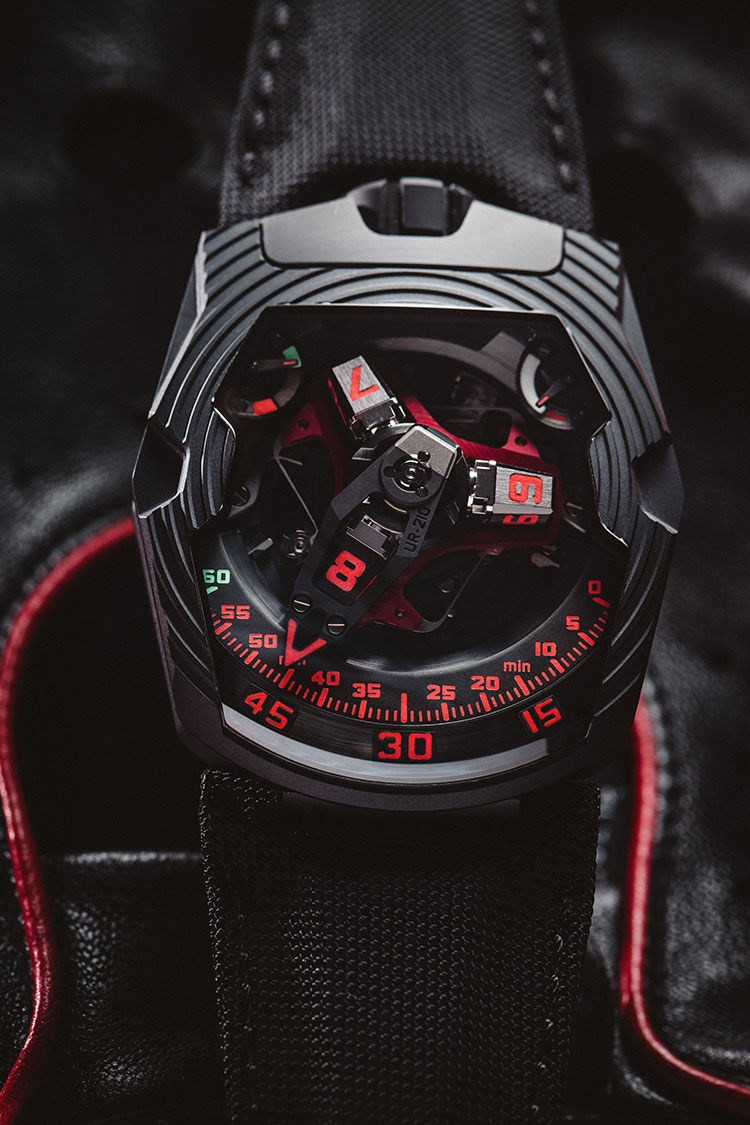 “With this model, URWERK reaches a new goal,” concludes Felix Baumgartner, master watchmaker and co-founder of the brand. “At the same time it opens a new chapter in the evolution of our complicated mechanisms. They now go beyond an original way of measuring a universal phenomenon to initiating a dialogue between the watch and its owner. The UR-210 indicates personal measurements, derived from you and no-one else.” 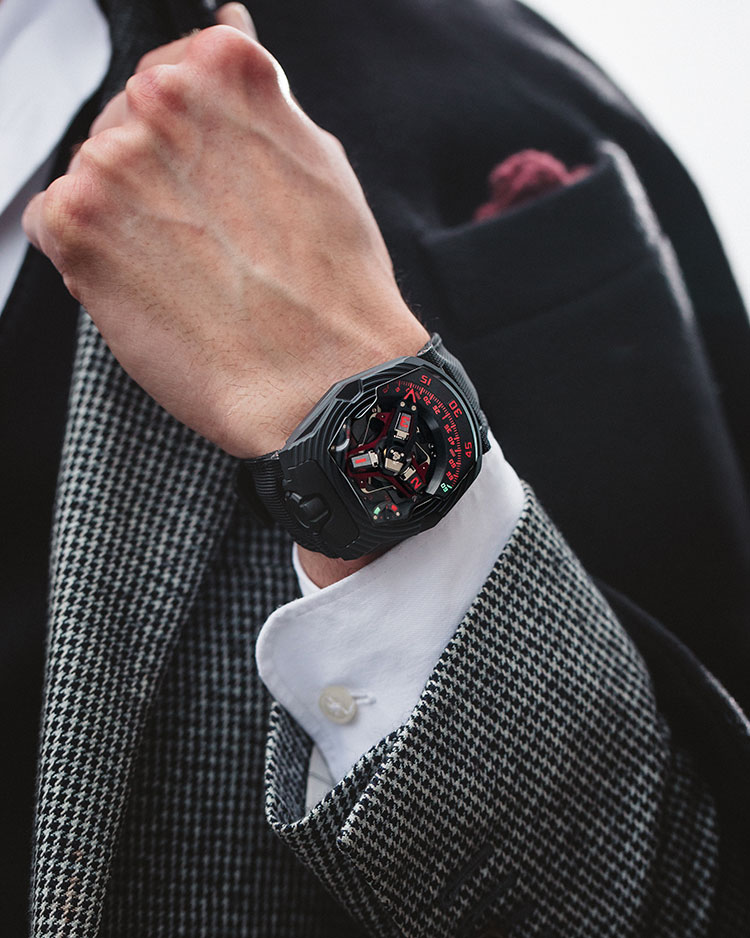 all images courtesy of Urwerk