The Boulevards occupy a unique place in Parisian geography. Serving as the historic demarcation between the center’s bourgeois neighborhoods and their popular suburbs, they are now hyphenated: a crossroads at the heart of the capital’s cultures. Only a few meters from the Poissonnière metro, we find the Bourse neighborhood and its passages, Sentier and its formidable pool of entrepreneurs, Montmartre and its theatres, Poissonnière and its hip restaurants, and Strasbourg Saint-Denis with its insomniac streets.

The Parisian life forever infuses the Grand Boulevards with energy. And so it is here, in an impressive building sitting slightly askew from the bustle, that, following the success of the Grand Pigalle, the Experimental Group decided to open its second Parisian hotel: l’Hotel des Grands Boulevards. 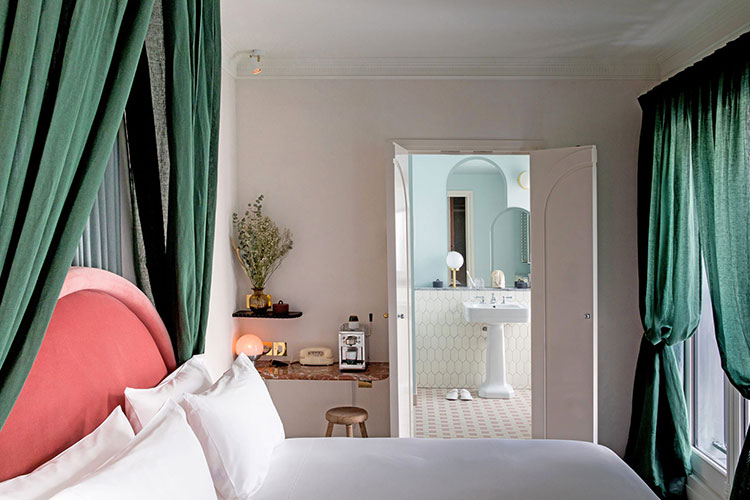 This building, one of only two that stands apart from the street, was built shortly after the French Revolution and is accessible only through a long entry that maintains its secretive character. On the main floor is the Grand Restaurant, featuring a menu designed in collaboration with Giovanni Passerini – a celebrated chef in the new Parisian gastronomic scene – and that revisits the great classics of French-Italian country cuisine. One delight in the myriad products served without artifice and the dishes to be shared in the covered courtyard and cocktail bar. 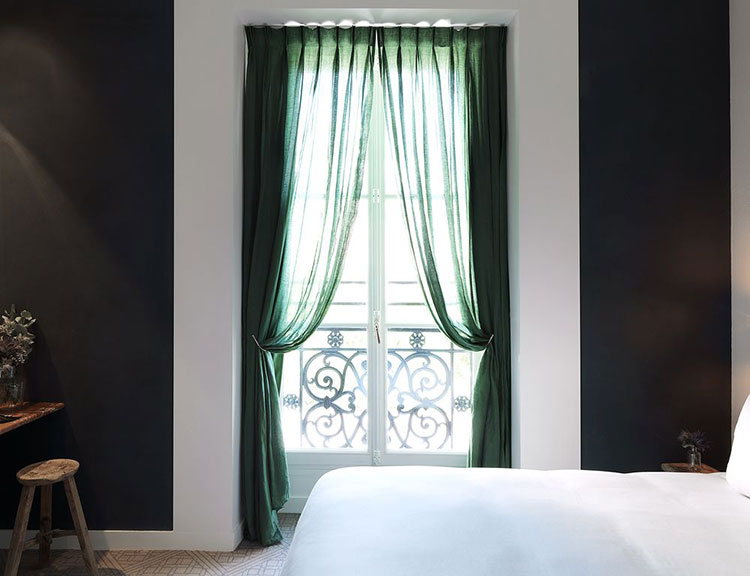 Upon the floors, there are 50 rooms spaciously distributed and two hidden terraces. For the décor, designer Dorothée Meilichzon drew inspiration from the building’s origins and history, but without falling into the expected clichés of the Louis XVI style. In the common areas, Meilichzon uses the paradox of the hotel’s location – hidden in the middle of the boulevards’ bustle – as a leitmotif to de-compartmentalize its environment. She mixes interior and exterior spaces, plays with clichés and diverse materials (terracotta, vegetation, trellises, a greenhouse, a fountain, statues, gates, etc.), and distributes perspectives. 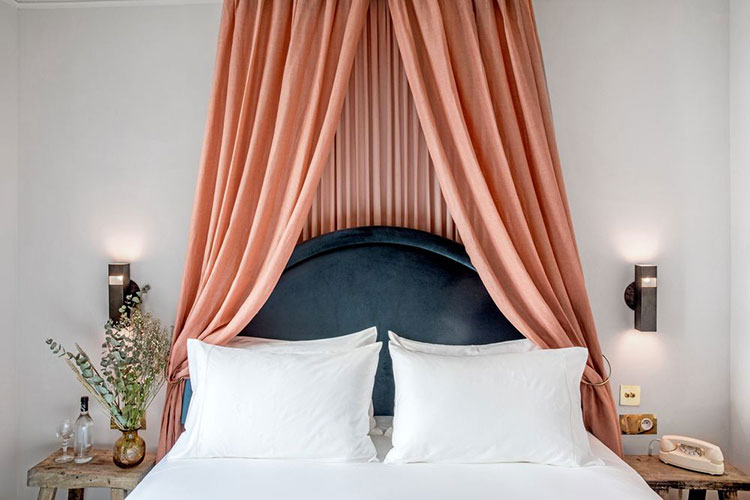 With a nod to the 18th century, she evokes a pastoral atmosphere from Marie Antoinette’s farm by adding cast iron stoves, faded blue faience tiles, a “warming plate” from the time of the Petit Trianon, wood, whitewash….all elements that popularly echo the grandiloquence of decorative references like four-poster and canopy beds. 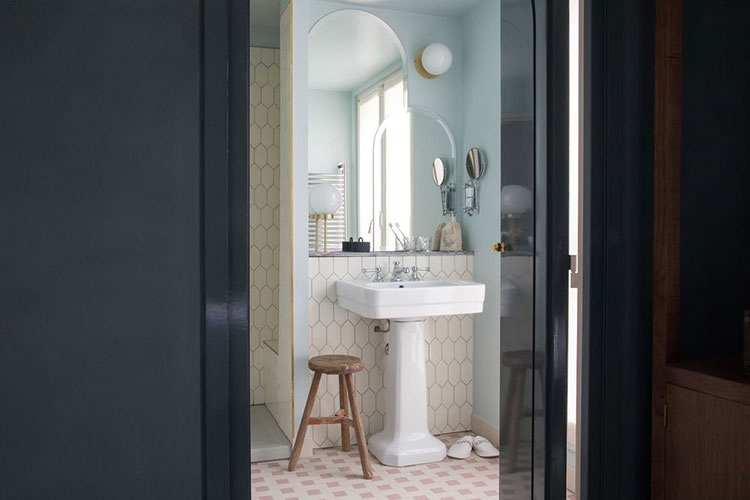 With varied typologies, the rooms will seduce the discerning traveler – noble floors with large volumes rising to the eves that open onto the sky. Here again, the designer sought a timely balance between the pomp of the “Grand Siècle” (draped curtains and canopies, 18th-century designs such as “showcase-cupboards,” graphical play using bossage, or red marble typical to Louis XVI) and a more pastoral esthetic present in the use of old linens, limewashed walls, rustic wood furniture, and antique bronze sconces.

In the heart of Paris, l’Hôtel des Grands Boulevards offers travelers and neighbors a historical and contemporary experience in the capital, between the romanticism of the aristocratic interiors and the rabble of the faubourg avenues. 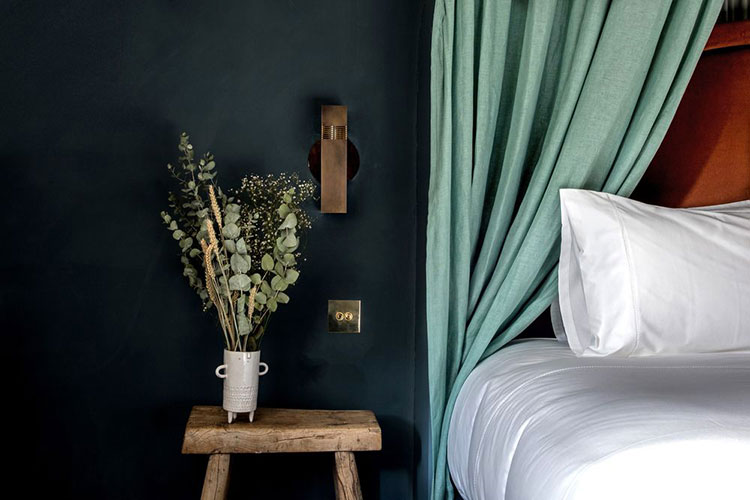 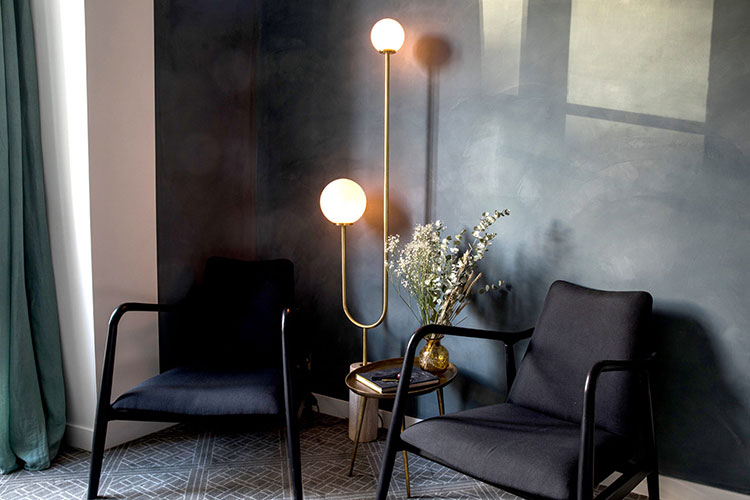 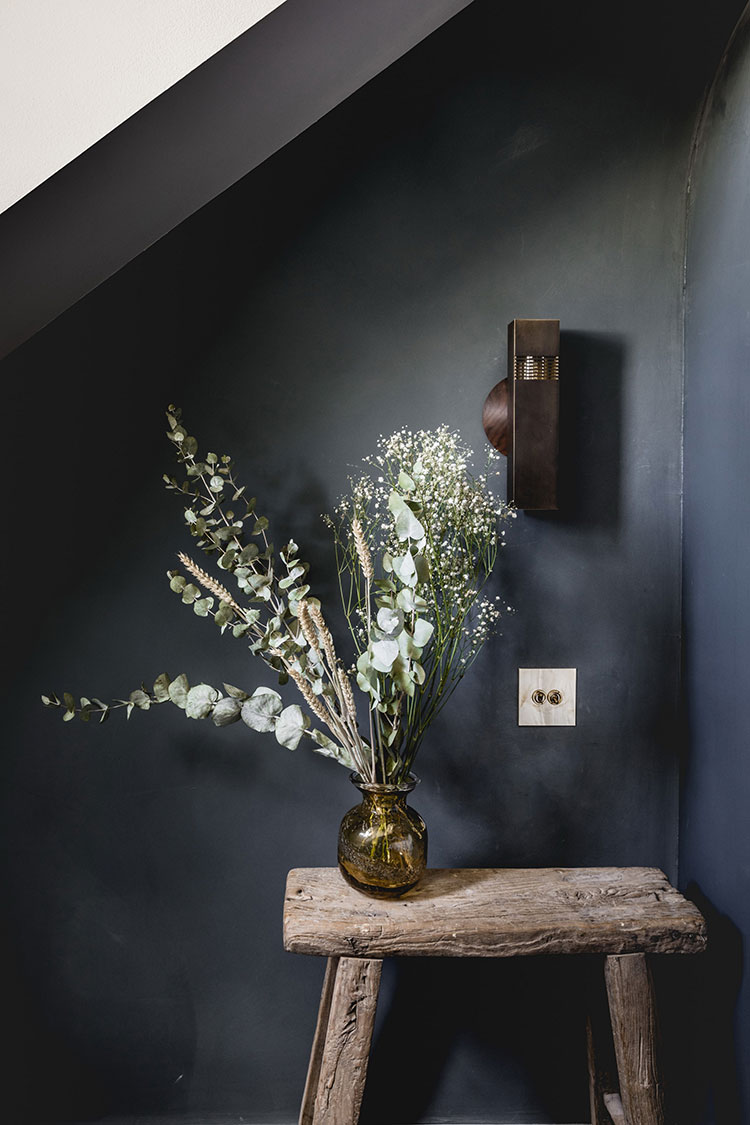 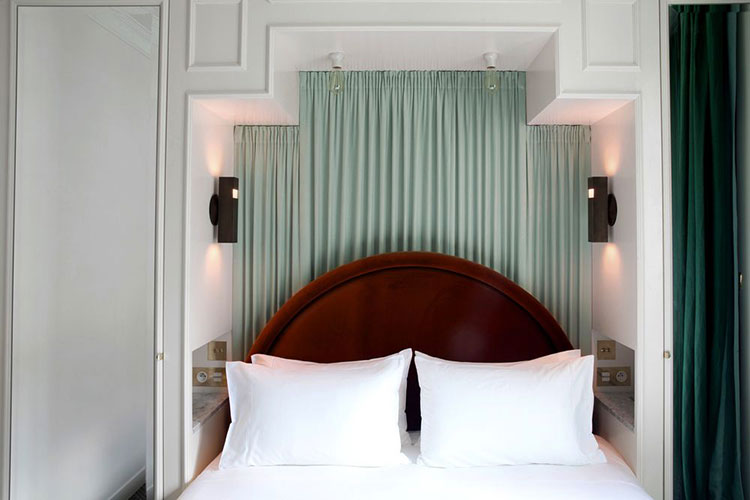 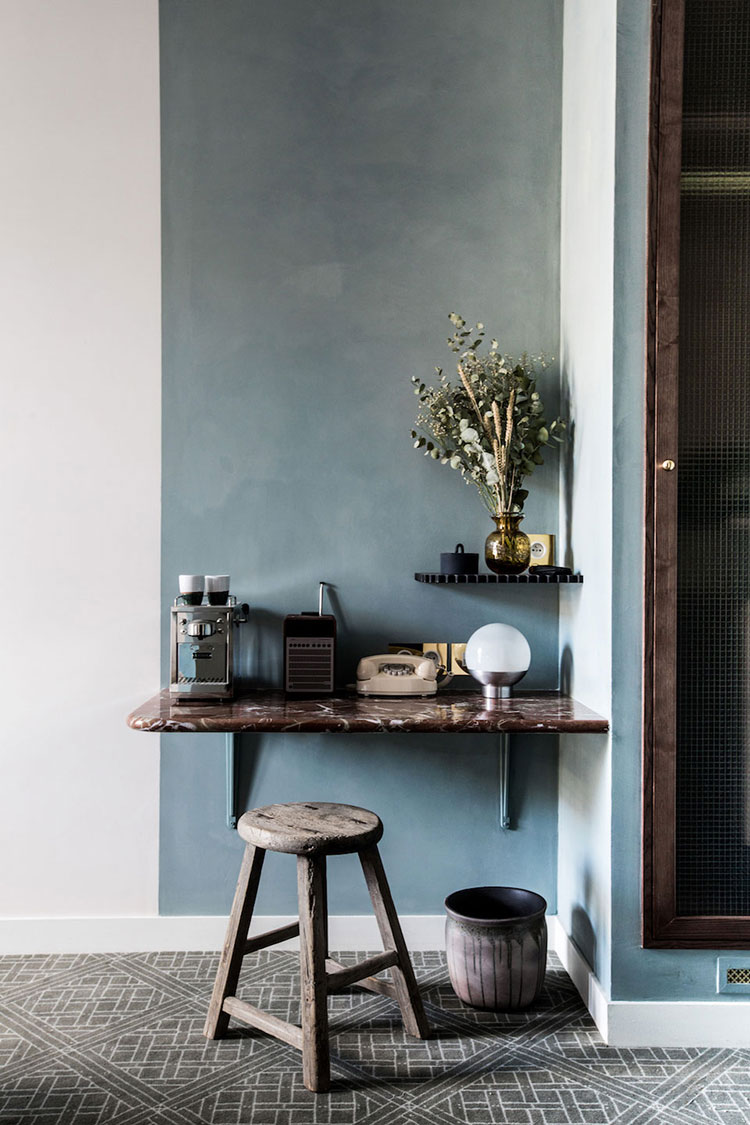 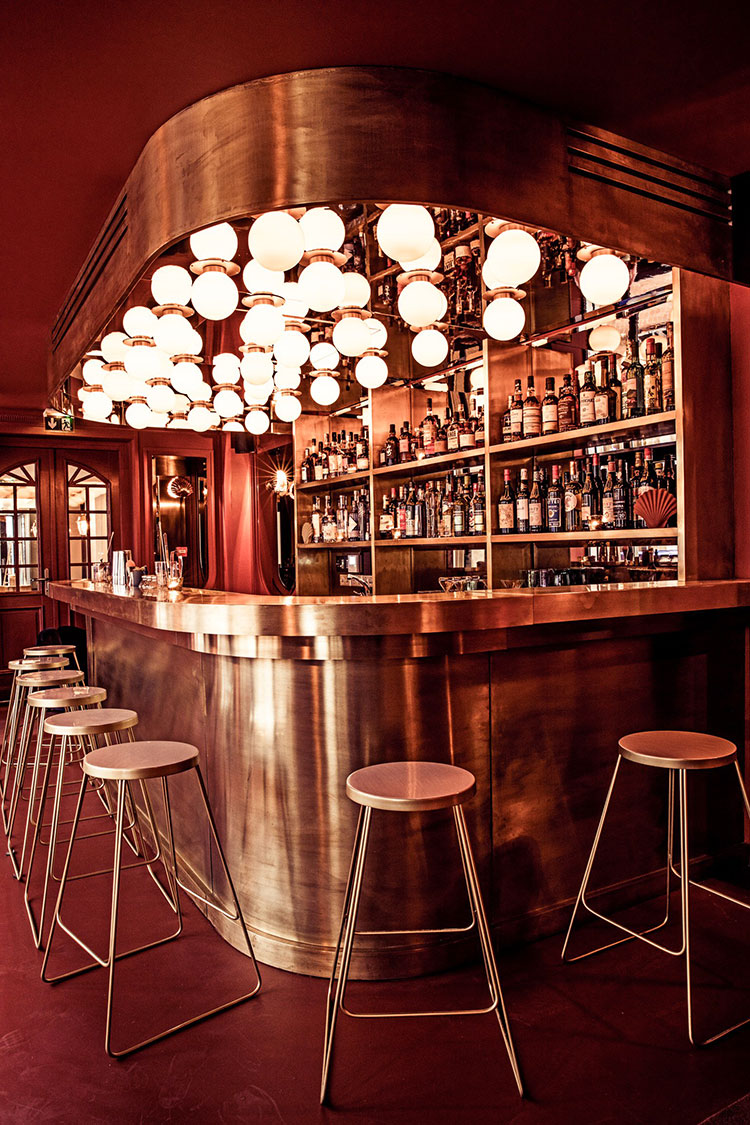 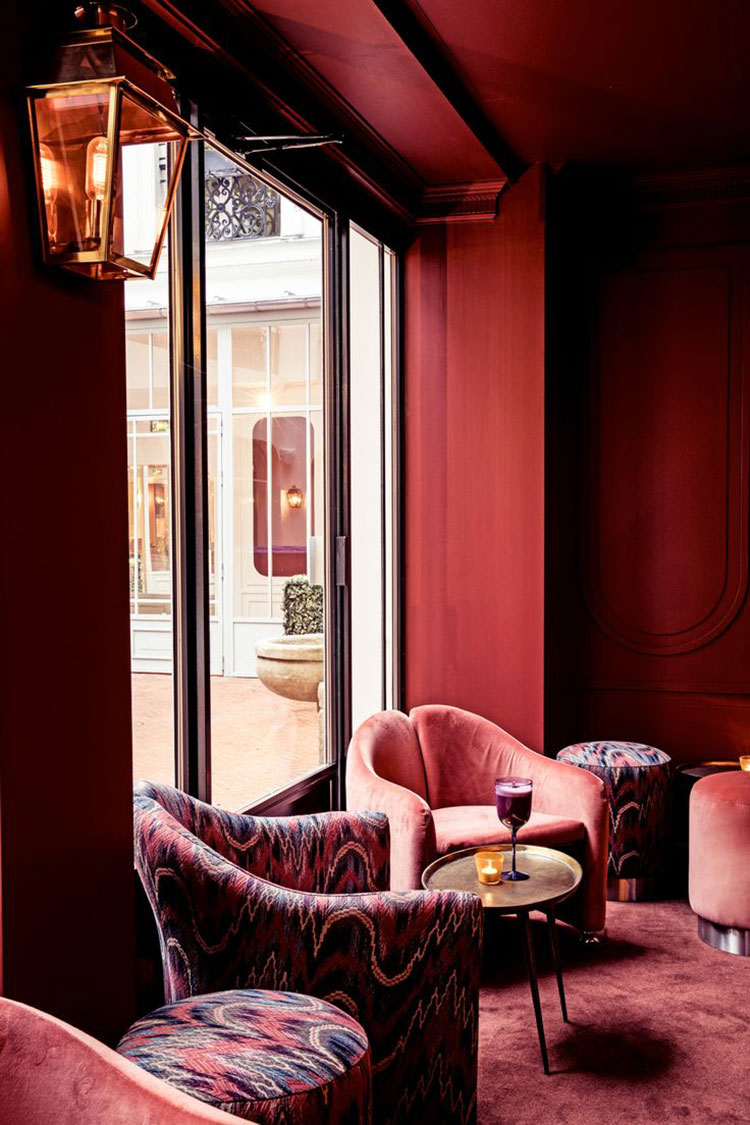 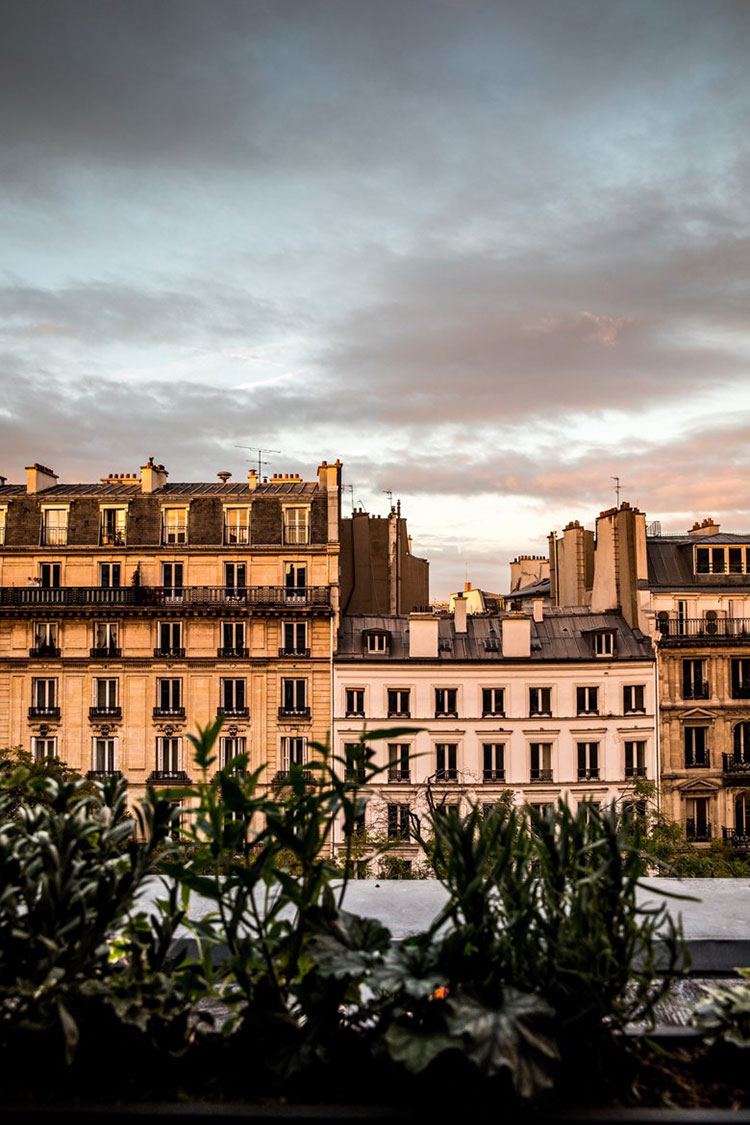