Coordination Asia has recently completed a new venue for Gaga restaurants and cafés, housed inside a historic villa in the heart of Shanghai. For the team, the project presented a particular set of challenges: how to connect the property’s past and present in a way that matches its current function, reflects the Gaga brand, and ensures commercial success?

Gaga’s venue, a former Christian girls’ school, is illustrative of a phenomenon that although not unique to Shanghai, distinguishes the metropolis from others in China. That is the ongoing dialogue between the cutting edge contemporary, and a richly storied past. This past century has witnessed an architectural narrative that has diverged from colonial grandeur to the skyscrapers, shopping malls and lifestyle hubs of now. Increasingly, Shanghai’s monuments of bygone eras are being reclaimed and reappropriated for the aspirations of today. 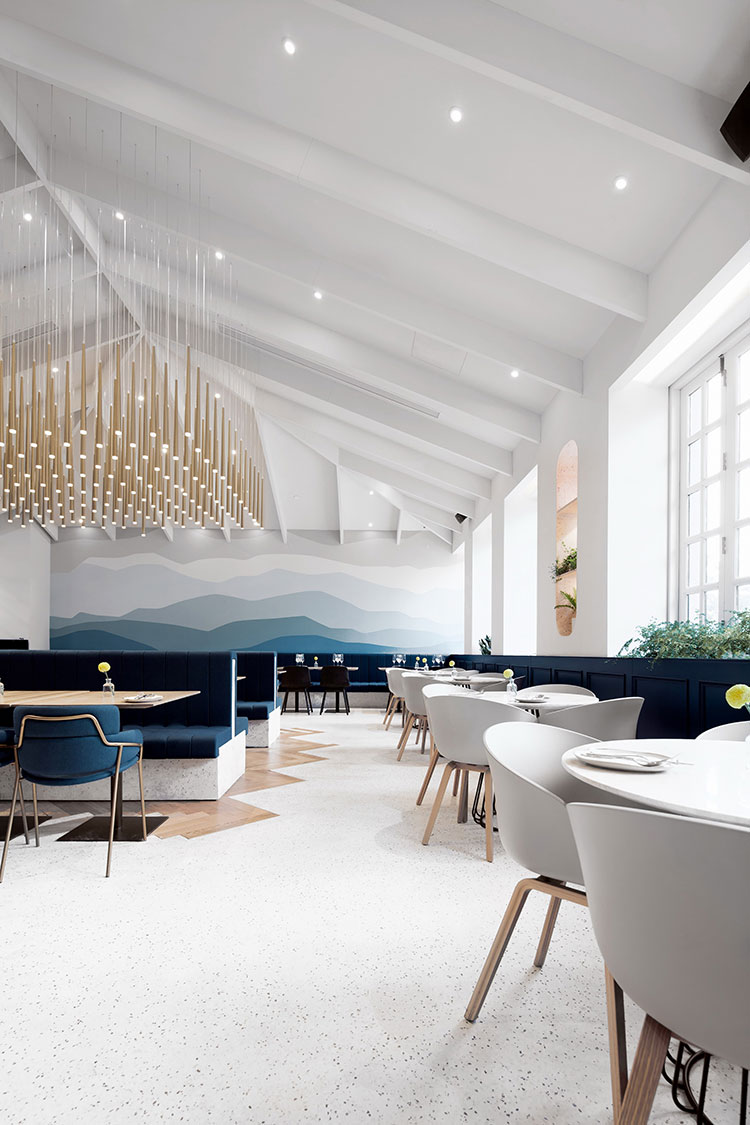 Beautifully illustrating precisely this exchange is Changning Villa: built in the late 19th century, it was once part of St. Mary’s Hall, a school established by the Episcopal Church of the United States. Now dwarfed by neighboring Raffles City shopping mall, its elegance doesn’t just endure, it perfectly complements its contemporary surroundings. 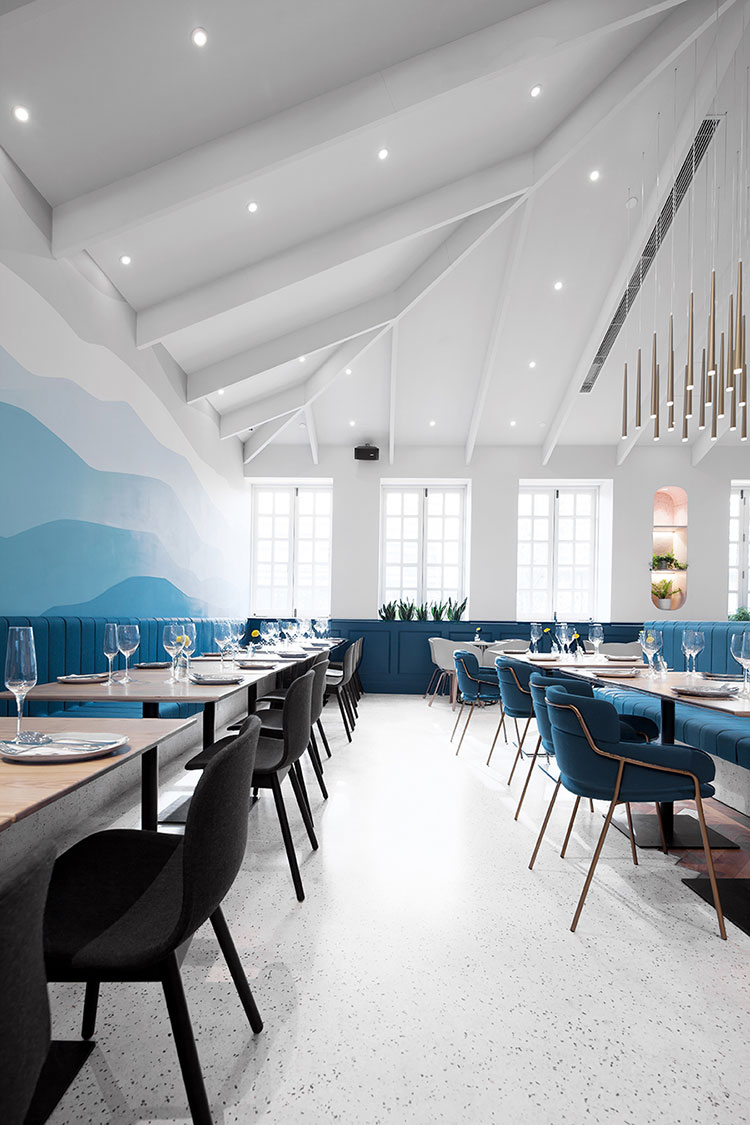 In designing Gaga Changning Villa, Coordination Asia drew on the building’s fascinating history and setting: a pocket of old Shanghai in a fast-paced metropolis. In particular, the villa was once linked to one of the city’s most prominent daughters, Chinese writer Eileen Chang, who was a student at St. Mary’s Hall in 1937. A seminal period in the city’s rich history, the epoch serves as a reference point for an eatery designed to subtly evoke the charms of Old Shanghai and a time known for its high-society elegance and artistry. 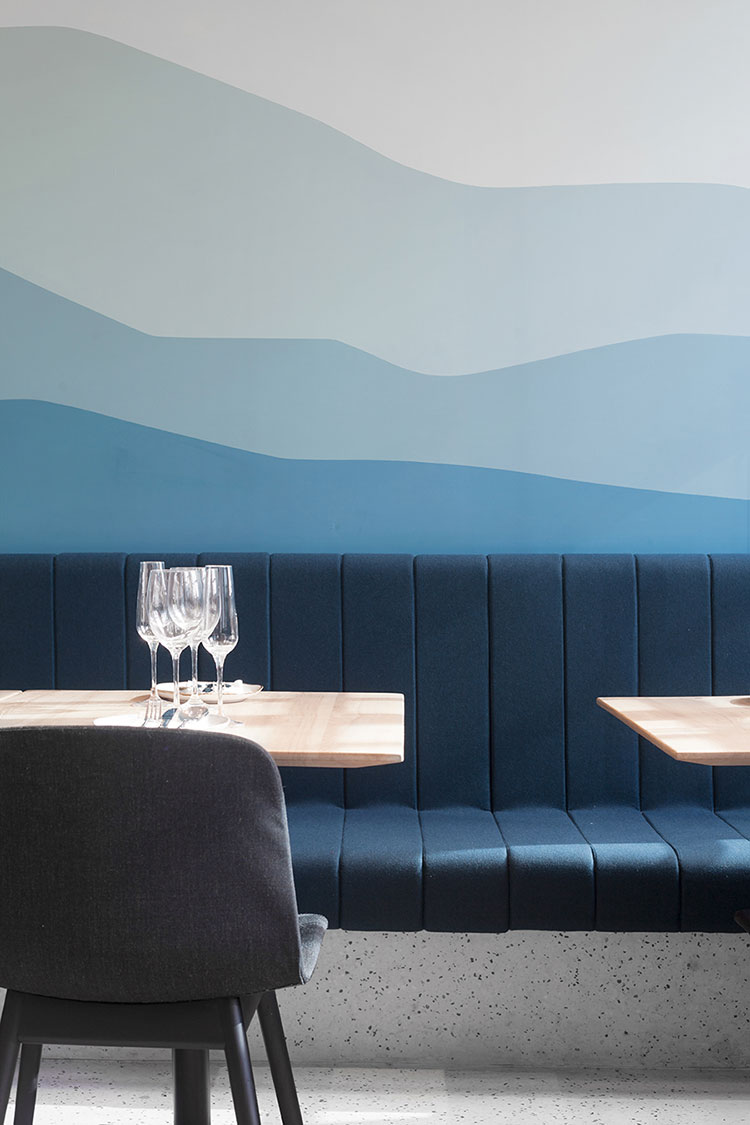 The Coordination Asia team sought to maintain the connection between the building’s historical connotations, and its present-day function: as a place for a fashionable set of dynamic consumers to congregate and exchange ideas. Dotted throughout the two-story property, art installations play a prominent role, with eminently social media-friendly, contemporary neon works hanging comfortably alongside objects more classical in tone. Furnishings in muted hues lend an effortless elegance while featuring walls of bold petrol-green draw attention to the villa’s generous and original windows. Recurring brass light fittings and dramatic ceiling lamellas echo the building’s splendor, as do terrazzo floors, corridors and restrooms. 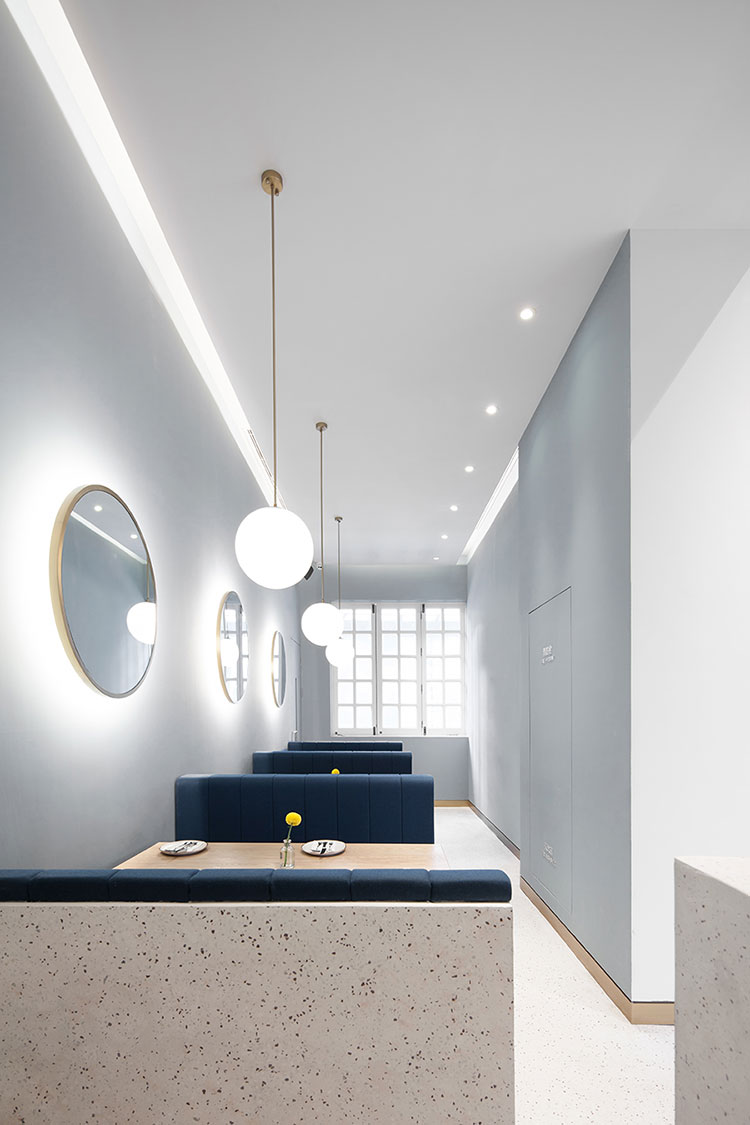 A particular priority was to create a layout and flow that caters to a diversity of guest requirements. Unusually, the café boasts three separate entrances, with the third accessed via an exterior arcade complete with attractive patio tables. No matter which they use, guests are directed to a central counter. Alternatively, customers can order refreshments direct to their table via WeChat. Seating spans high stools at the café’s striking bar, long sofa benches, and freestanding tables. Together, they provide adequate accommodation for individuals, groups – and of course, ample space for settling down with a coffee and laptop! 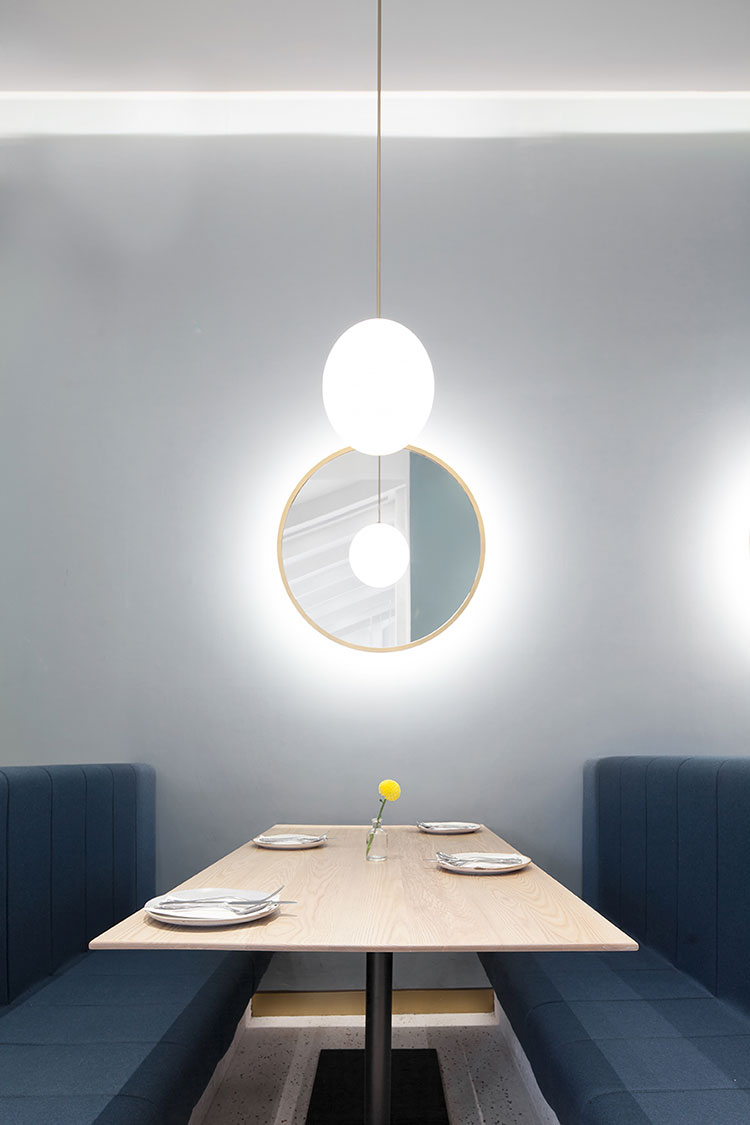 Compared to the ground floor’s deliberate contrast between a light and stylish café area, and sophisticated bar that is moodier in tone to mirror the mystery of evening time, Gaga Changning Villa’s second story is open and bright. The building’s original pitched ceiling has been highlighted and preserved, brought up to date by way of a striking brass installation that hangs above the space. Tucked away in the northeast corner, a separate dining area revisits that deep petrol-green hue so prominent in the downstairs space, presenting a more intimate dining area where guests can watch Gaga’s chefs in action via an oversized kitchen window.

These diverse elements come together to convey a sophistication and culture that matches Gaga Changning Villa’s target demographic. Although striking and bold, the design maintains the all-important dialogue with the building’s past, continuing its legacy as a place for exchanging ideas via art, design and color – all the while positioning Gaga’s passion for first-rate dining and coffee culture front and center. 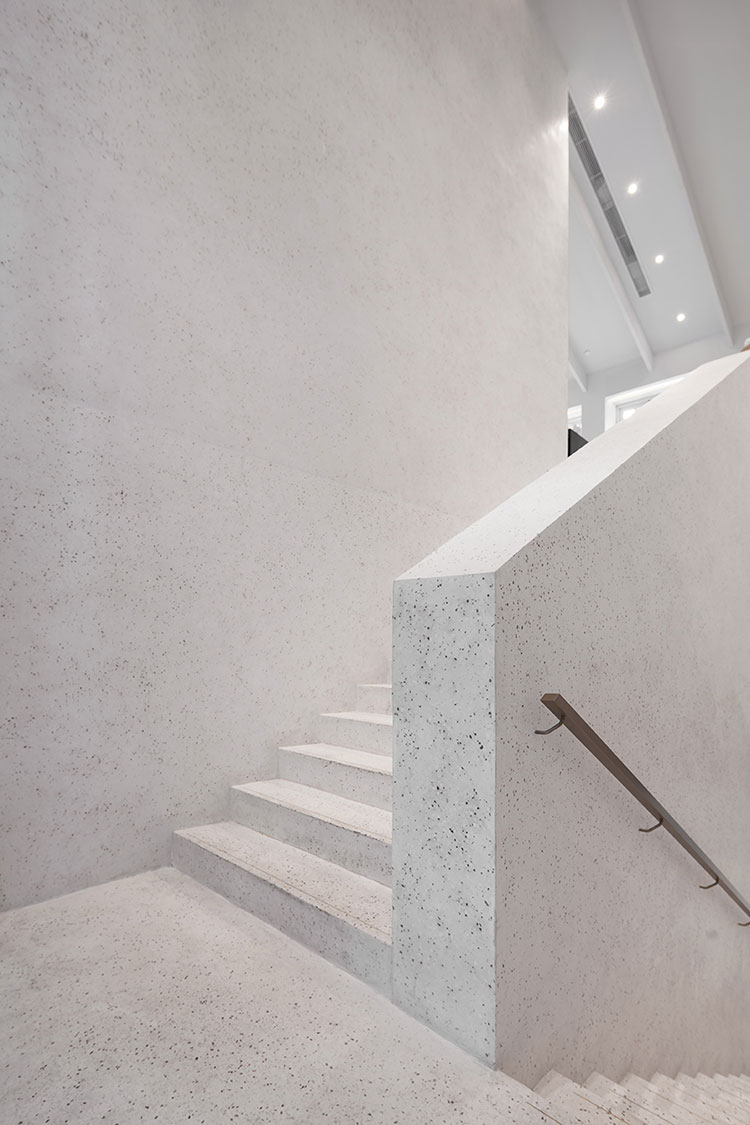 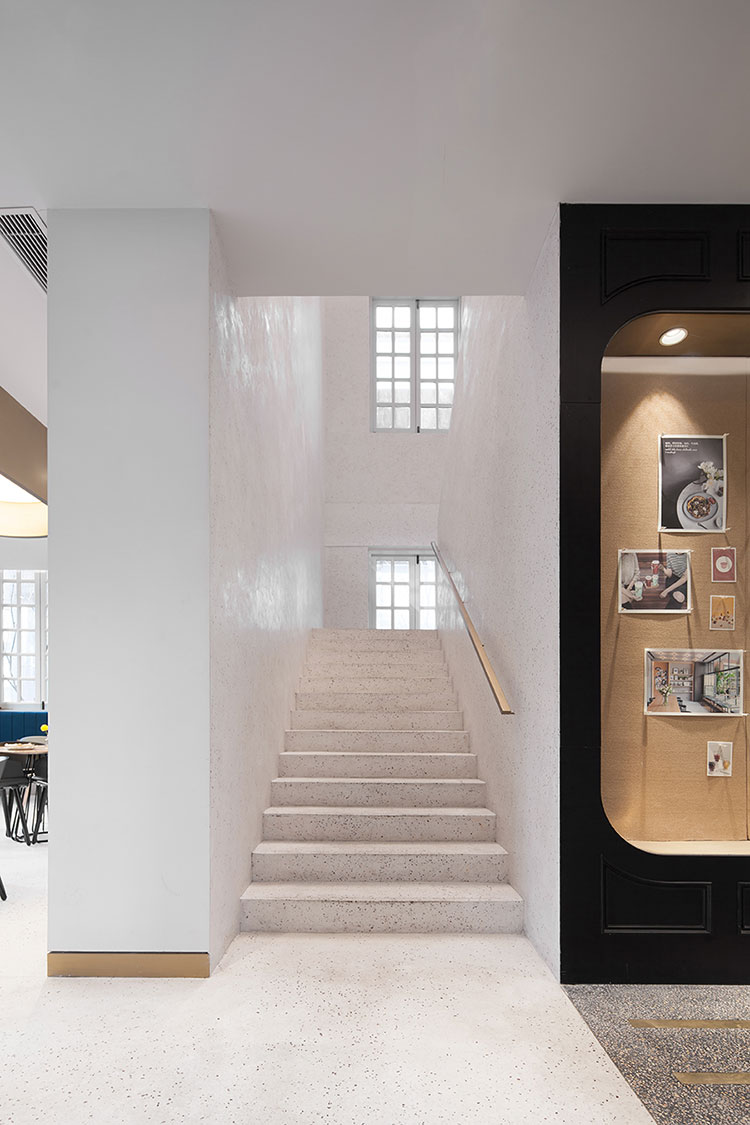 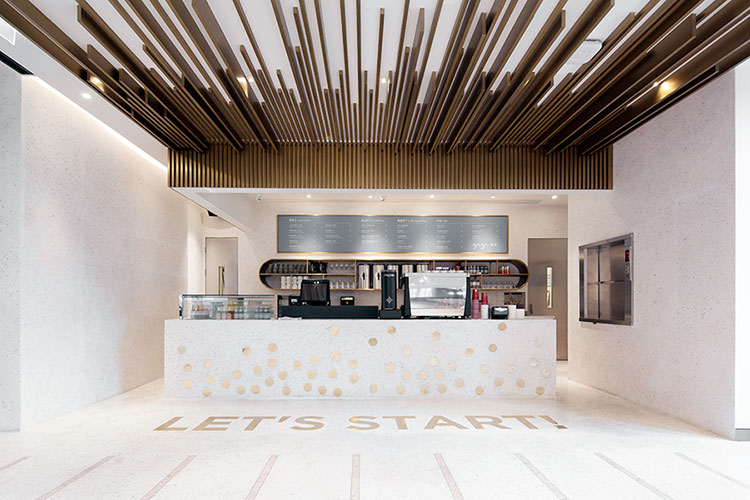 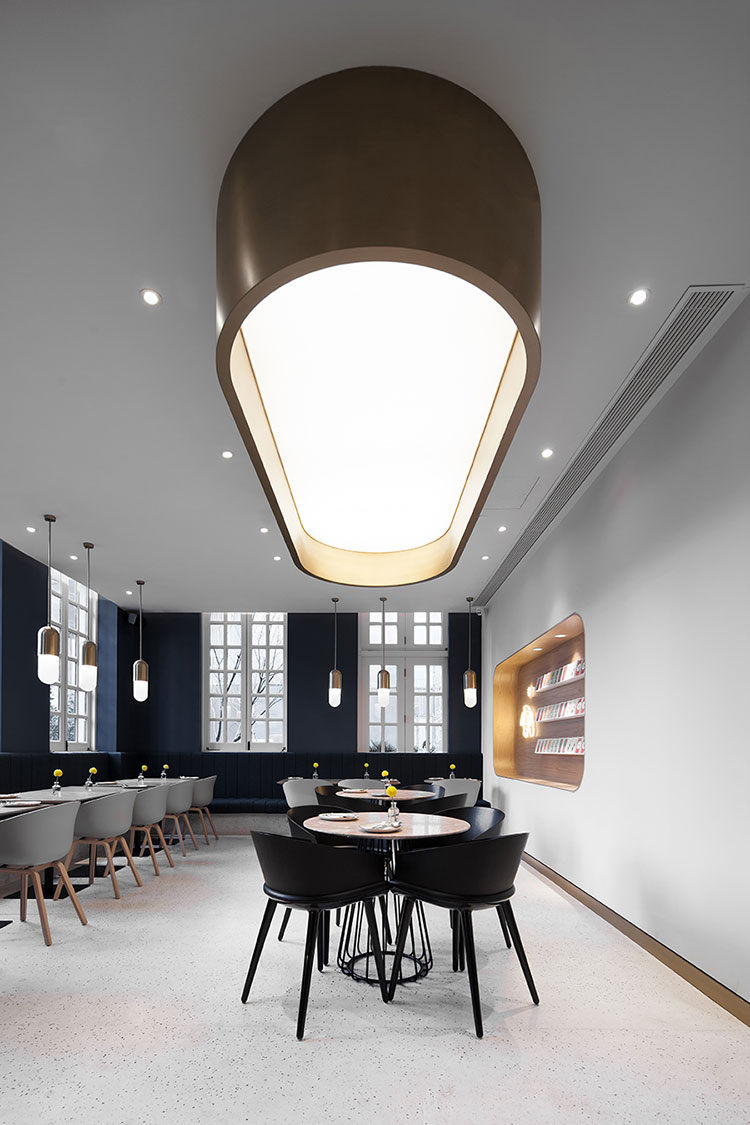 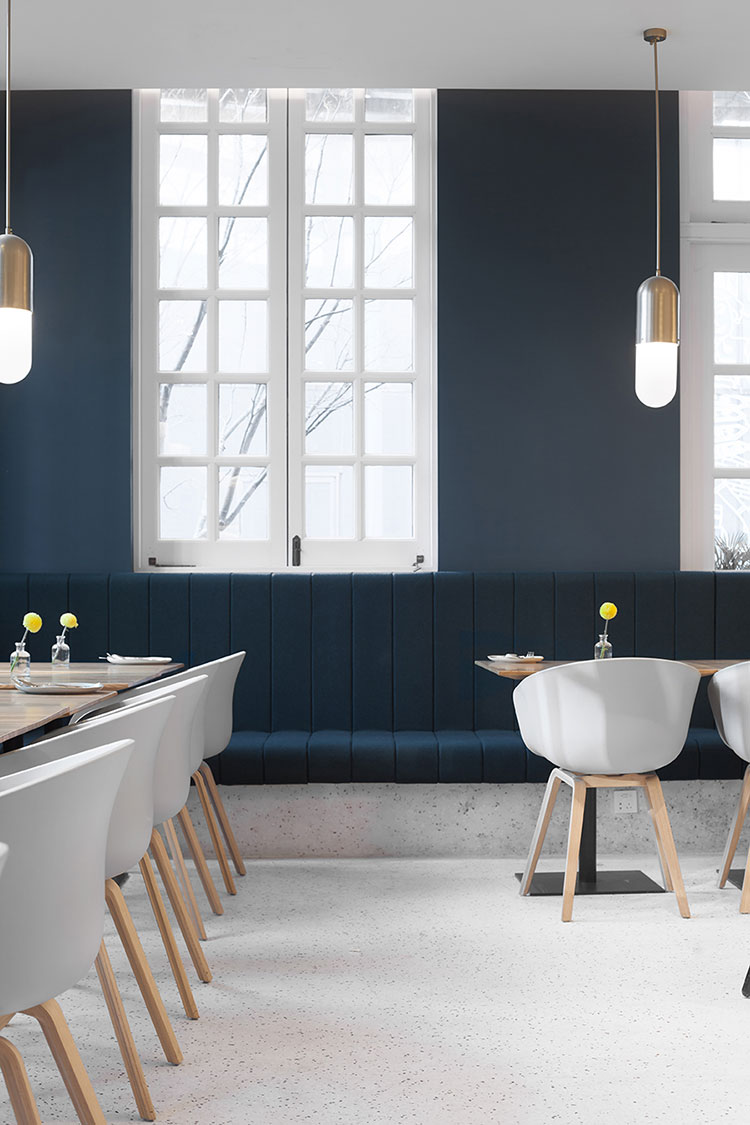 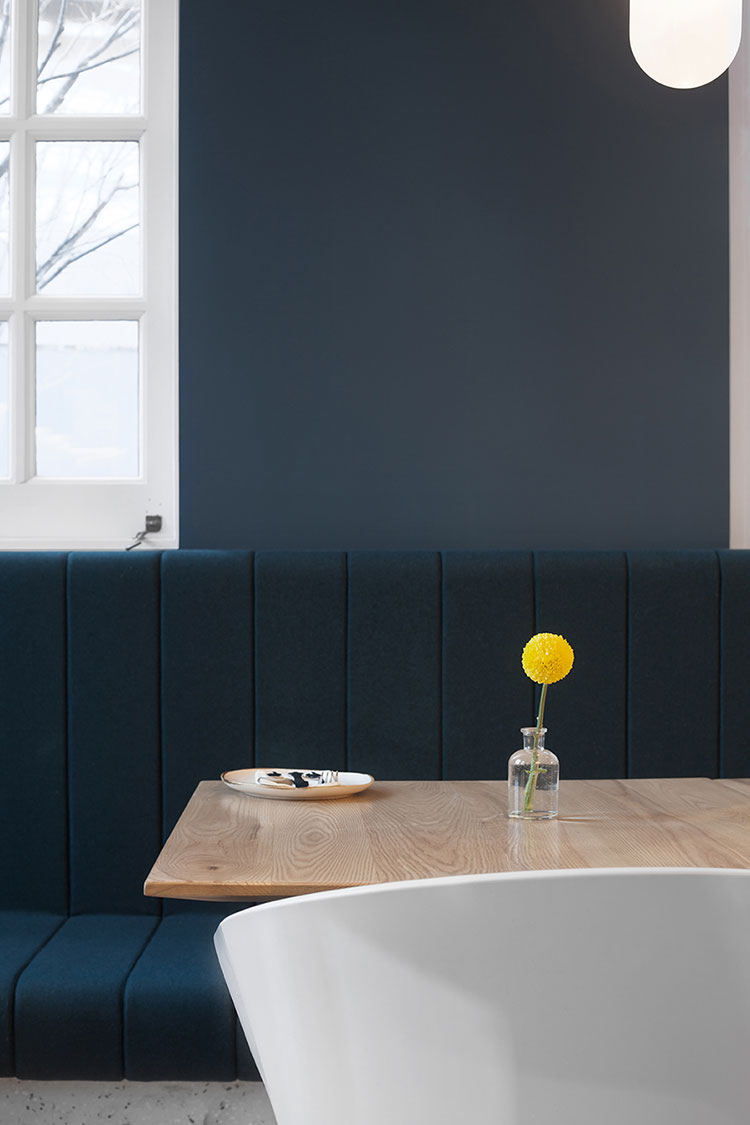 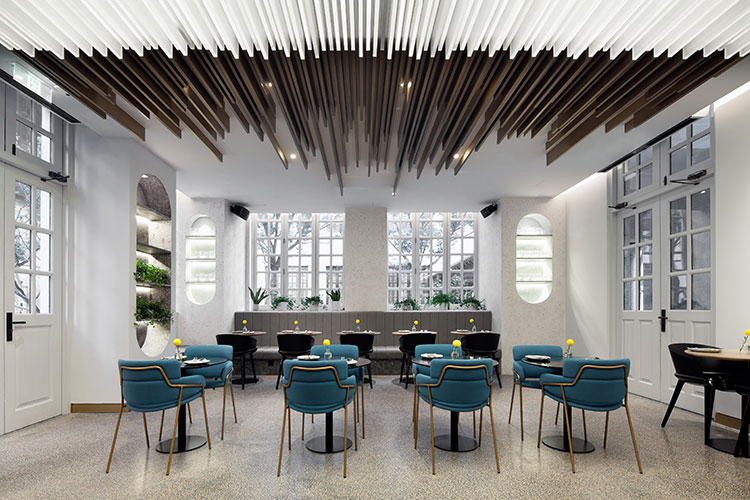 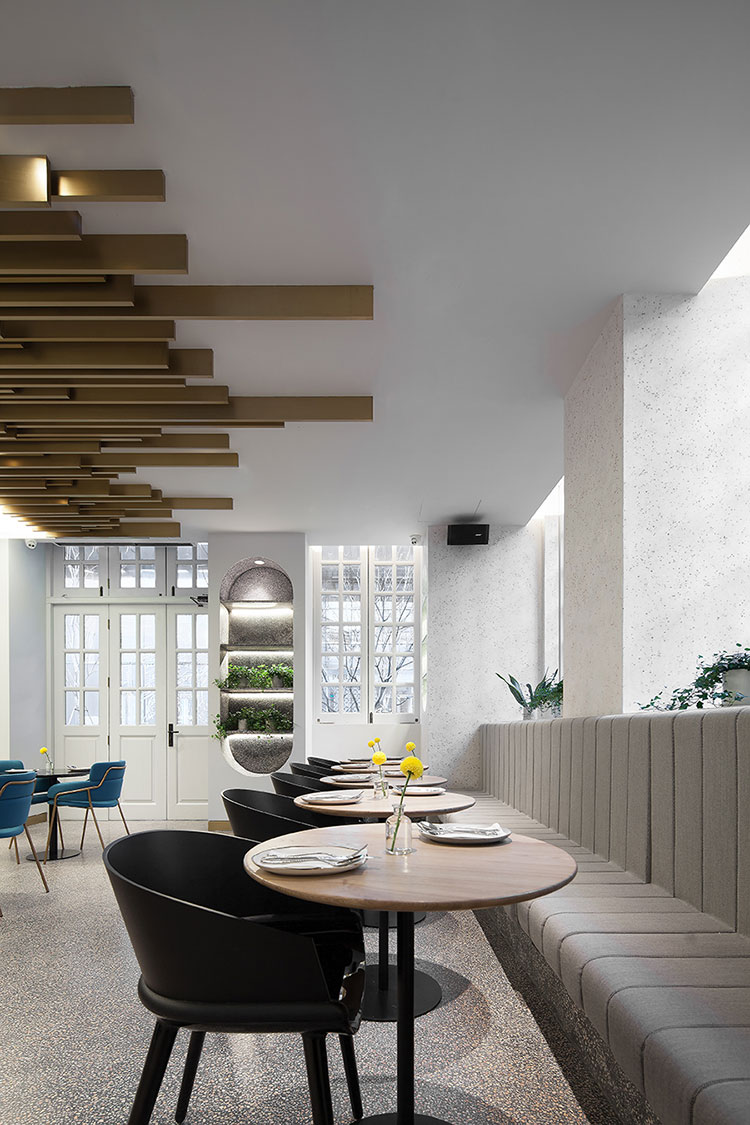 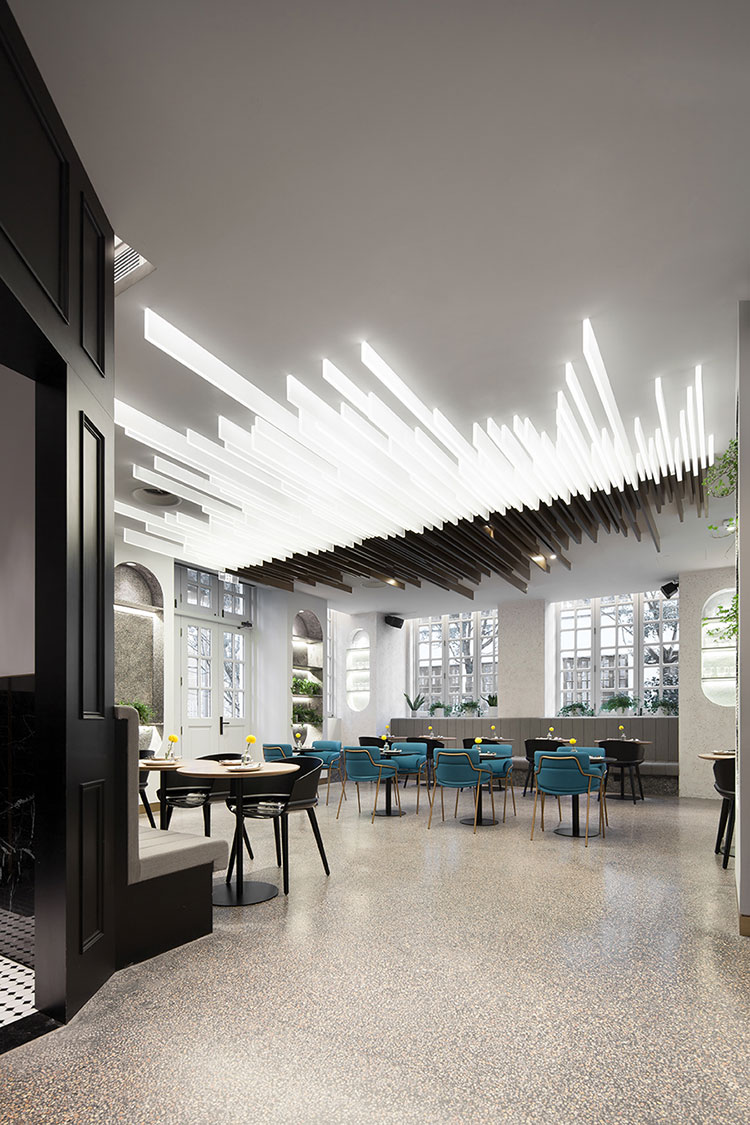 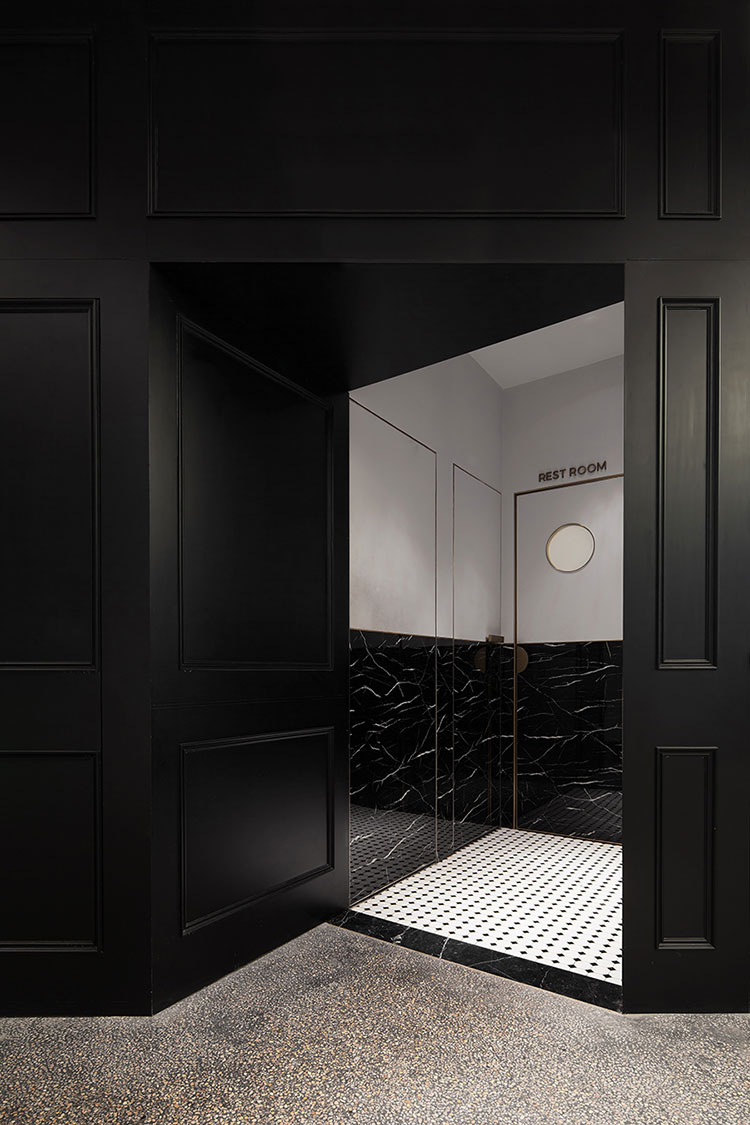 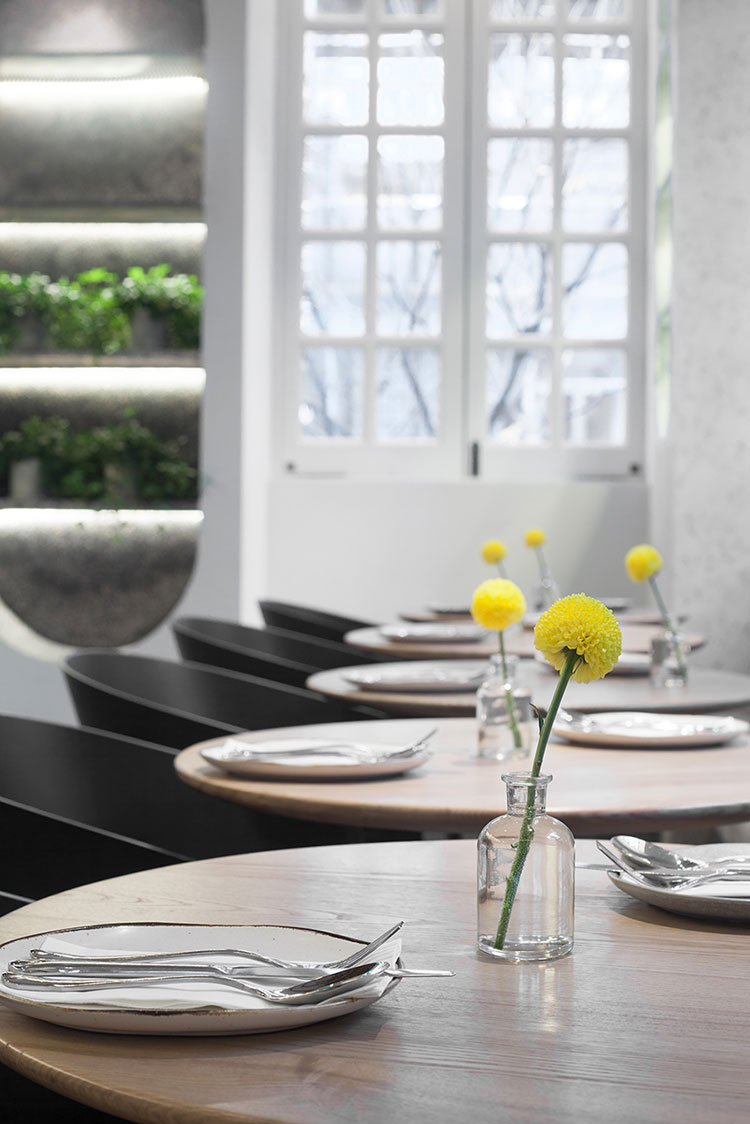 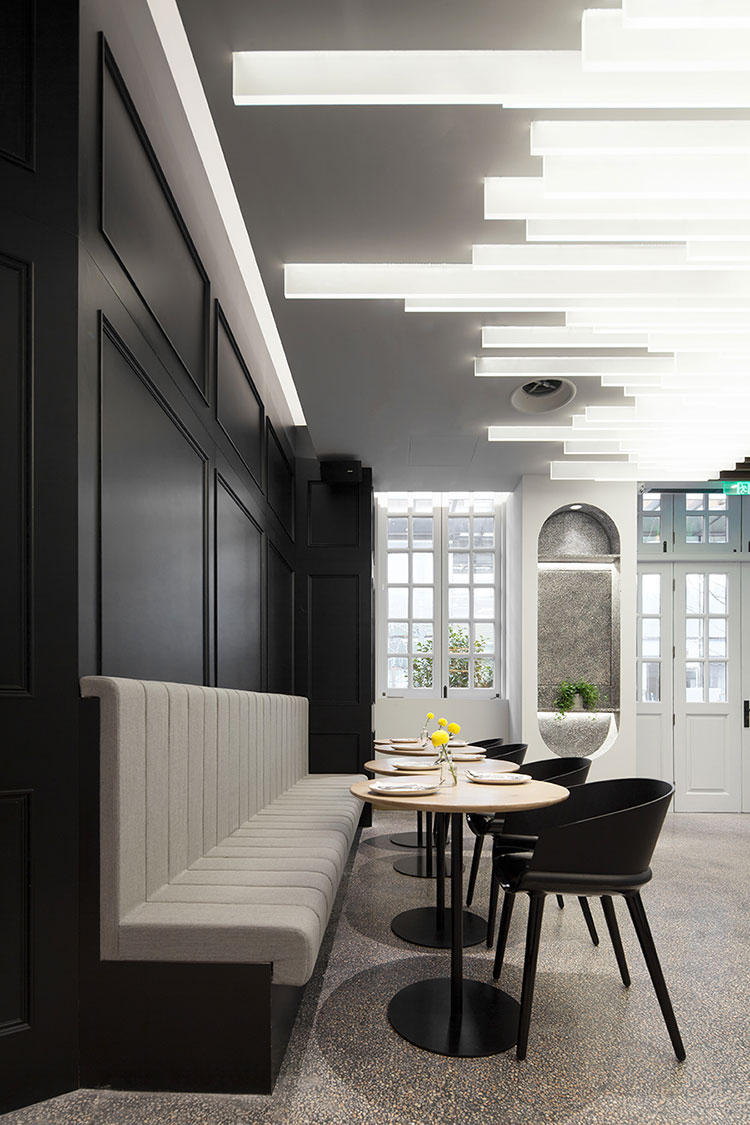