Barcelonese studio Lagranja Design has carried out the transformation of a historic building located on the Sitges esplanade, Spain, which hosts the recently reopened Hotel Terramar. Artisan materials have inspired the interior and creative processes, in order to create one-off pieces of contemporary style that still maintain a traditional quality.

It is said that it was in Sitges that the Spanish term ‘chiringuito’ (open-air beach bar) first appeared, a concept imported by returning émigrés from Cuba during an epoch in which artists and the avant-garde where inspired by the town’s light and charm. The first Hotel Terramar (now the ME Sitges Terramar) opened its doors in the 1930s, when tourism here was dominated by the chattering classes. Back then, the establishment had extensive gardens and formal salons, of which very few architectural details remain. Mass tourism of the 1960s brought on another transformation, which converted the hotel into a beach holiday resort typical of the period. One of the challenges for Lagranja Design was to return the lost spirit of grandeur to the hotel, and at the same time respect the identity and signature touches of the ME by Melia brand, along with creating a contemporary new leisure experience by the Mediterranean. 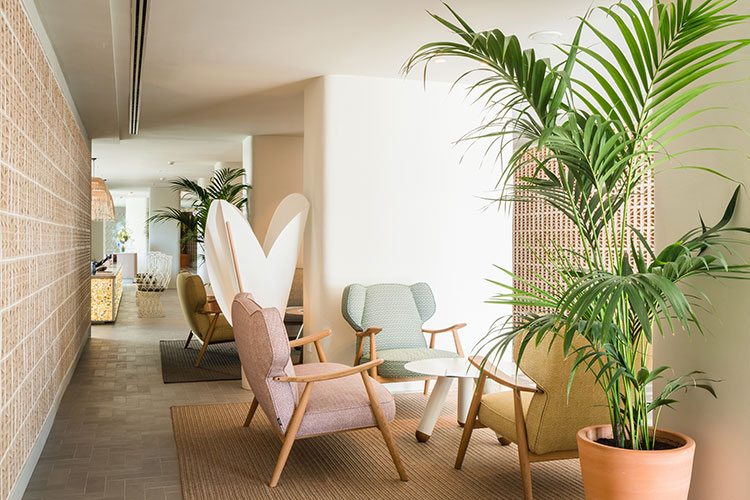 This objective has been fulfilled by using local craftsmanship throughout the interior spaces. Materials and techniques in the Mediterranean tradition are present in the original furniture and lighting that the studio has designed and had made specifically for the hotel. Unique pieces, made exclusively for each project, is a unique feature of Lagranja Design. Prototypes are crafted in the studio’s own atelier, and then local providers are sourced for production. 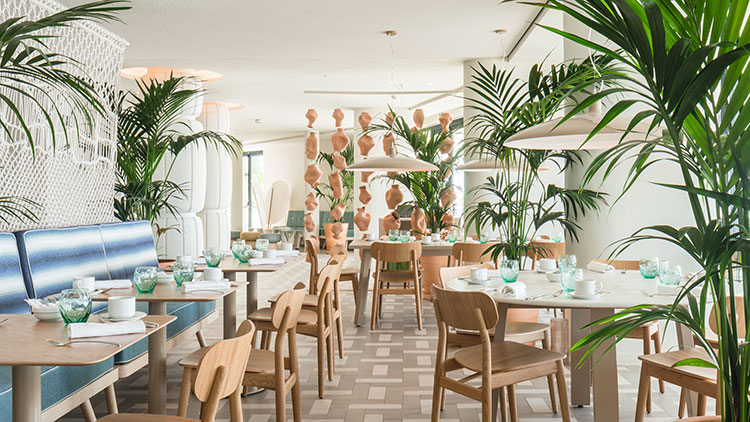 Basket ware, ceramic, macramé and terracotta are present in many of the decorative elements in the interior design of the new ME Sitges Terramar. These materials are connected to the traditional identity of the location, but have been tailored to the modern values of the hotel group. A large number of pieces have been created, such as pillars covered in plaster or wicker elements, large rattan lamps, decorative plaster details, and room dividers made of traditional ceramic pieces that have been moulded to unusual organic forms. 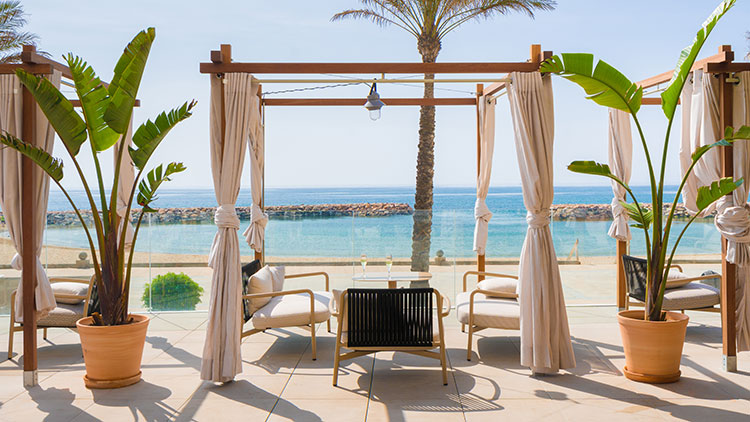 In the same vein, a large ceramic trellis was designed that converts many of the walls to lighting elements that, along with demarking spaces, illuminate and create lighting effects. These singular pieces are combined with sofas and Basic XL armchairs; designed for the hotel, and now forming part of the Basic de Lagranja Collection. The lighting, created in warm tones, seeks to highlight the warmth and imperfection of the artisan processes used throughout. 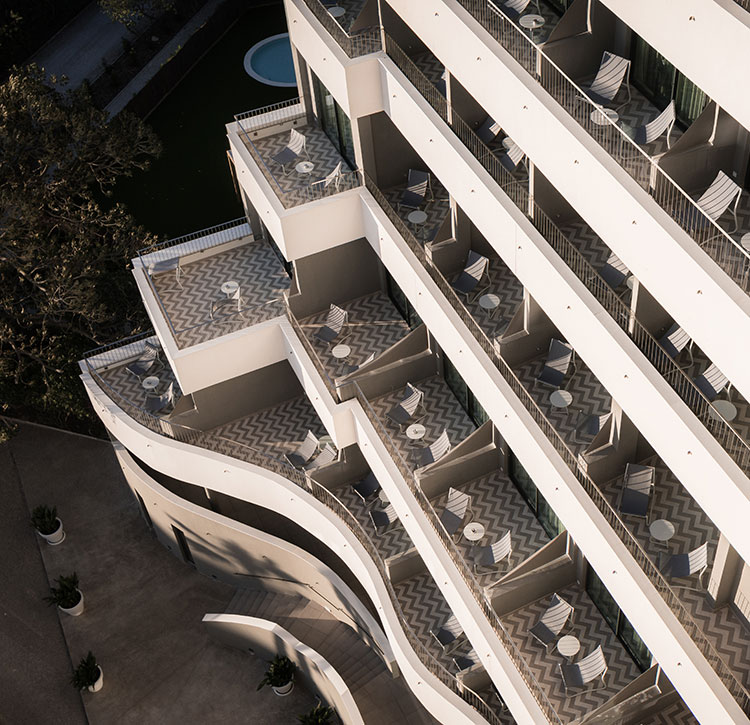 A large number of these materials have been used on the spacious ground floor.  Conceived as a space for leisure and meetings, the reception area, which is tucked away from the main entrance, is formed by a large desk executed in marbles of varying colours, The intent of the studio was to give life to this floor and open it out to not only guests, but also passer-by’s and occasional visitors. To achieve this, they had to completely change the morphology of the building, placing the elevators, stairway encasements, and other installations in the rear, with the reception area in front of these structural elements.

One of the few vestiges of hotel’s golden age is the Salon Real – a large ballroom for parties and banquets presided over by an enormous chandelier. The interior project has salvaged part of the original design of the space, along with restoring the light fittings. 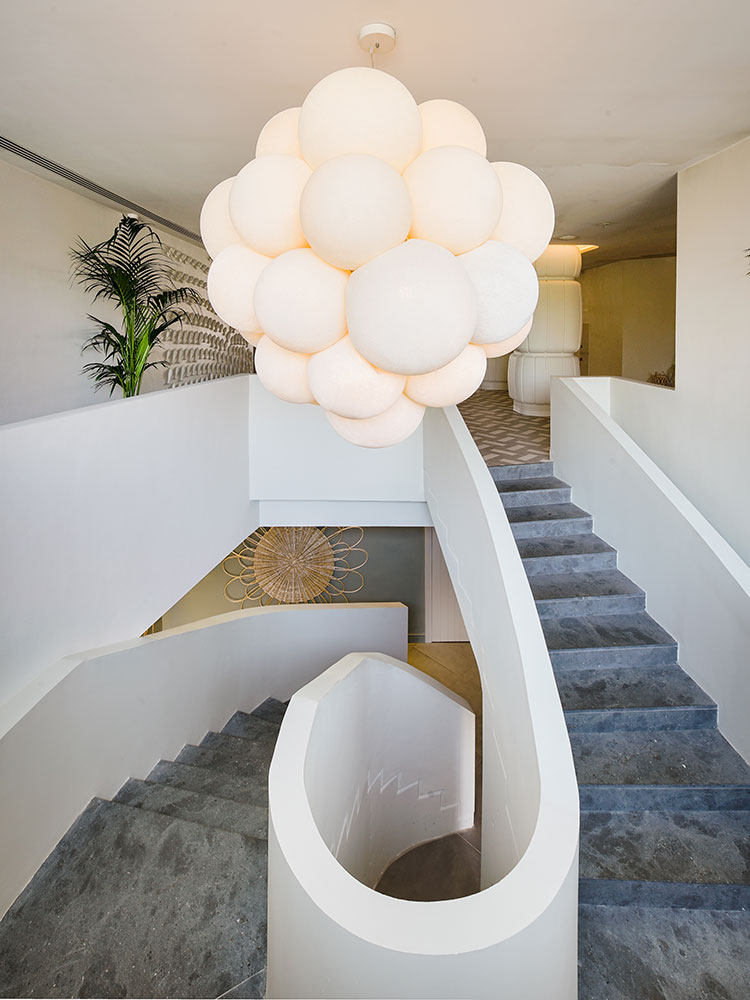 Along with the lobby and reception area, the ground floor hosts a restaurant and a terrace. Here, a traditional Mediterranean ambiance has been created, using wooden sun protectors, Menorca-style chairs and wooden and flax furniture. The outdoor cocktail bar also uses this material. In the same spirit, part of the original design of the gardens has been recuperated  – some of which is now part of a public park. Some of the flora and plant species found in the gardens have been introduced into the hotel decor, with the aim of fusing the exterior with the interior. 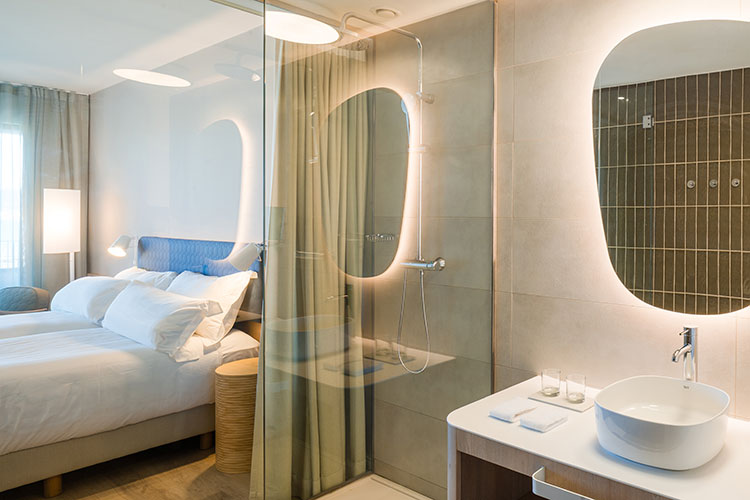 Along with the previously mentioned outdoors bar next to the swimming pool, the gastronomic offering continues in the Oyster Bar, situated next to the lobby. And lastly the top floor terrace, which accommodates the VIP swimming pool, has a bar that affords stunning views over the bay of Sitges.

The hotel’s common areas continue in the lower-ground floor which as a fitness centre, spa and new room for celebrations and business events, lending the hotel another dimension. 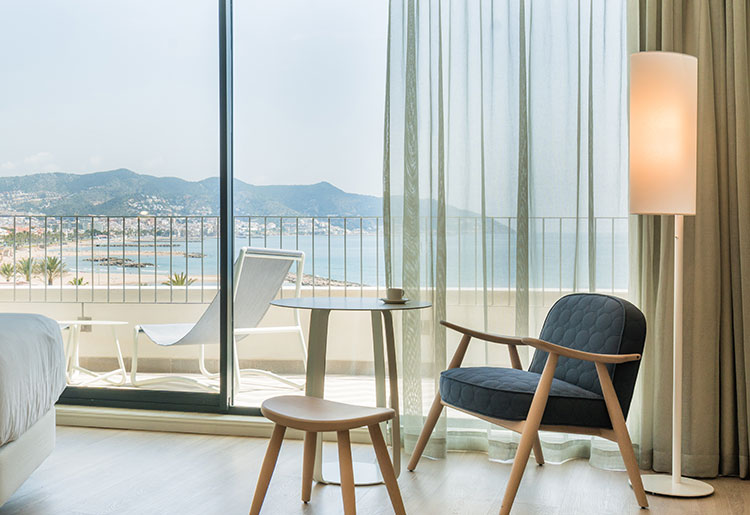 The hotel’s 213 rooms are spread out over six floors. With 18 different layouts, the design concept had an extra layer of difficulty. The rooms have been unified with furniture specifically made for the project, which include a bar, wardrobe and bathroom that share the same visual language but have been adapted to the size and layout variations in each room. Amongst these pieces the clothes racks stand out; an open-sided structure in which the studio’s signature Orbital lamp has been placed. On the upper floors, that hold the suites, a wooden bedhead has been added to the decor. The suites have a terrace that can be used for private events.

These and all the terraces (which are visible from the upper floors) have been unified via mosaic flooring in a chevron pattern. All have been fitted out with the Bold Deck Chair and Sitges side table, pieces that form part of the latest Lagranja Collection, the furniture line that is designed, produced and distributed by Lagranja Design studio.