Located in Colmar, France, in the heart of the Alsace wine district, La Maison des Têtes (or The House of Heads in English) is a historical and listed building completed in 1609, whose name stems from the 109 small head sculptures that ornate its renaissance style façade.

This building, today a five-star hotel with two restaurants, is one of the major sights in Colmar, next to the Unterlinden Museum that was recently renovated and extended by Herzog and De Meuron. The listed building was recently taken over by chef Eric and Marilyn Girardin. In addition to an existing Brasserie, a restaurant serving traditional French and Alsatian dishes, Eric Girardin wanted to create a new restaurant offering a contemporary gastronomy, renovate lobby, common areas, and hotel rooms. 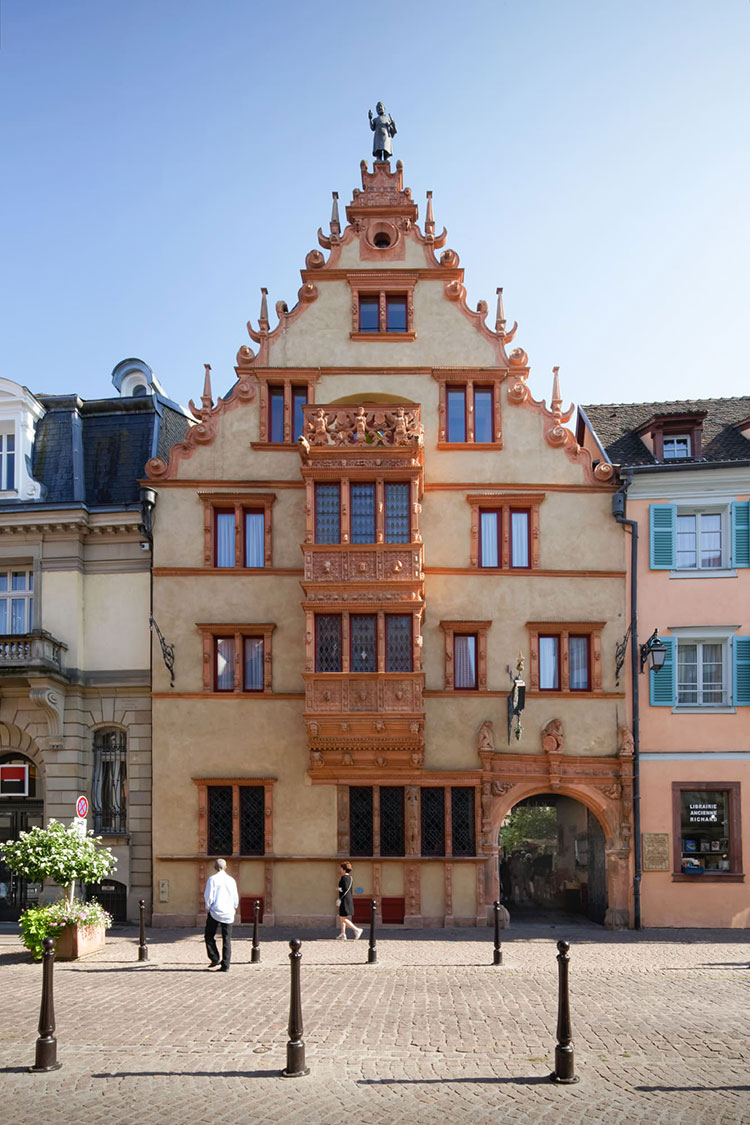 Access to the F+F’s hotel from the street is through a listed paved courtyard shaded under the foliage of climbing vine plants. The lobby which was sombre and heavy with wooden panels has been treated in a contemporary manner, that contrasts to and highlights the remnants of the thousand-year-old City Wall of Colmar that crosses the lobby. 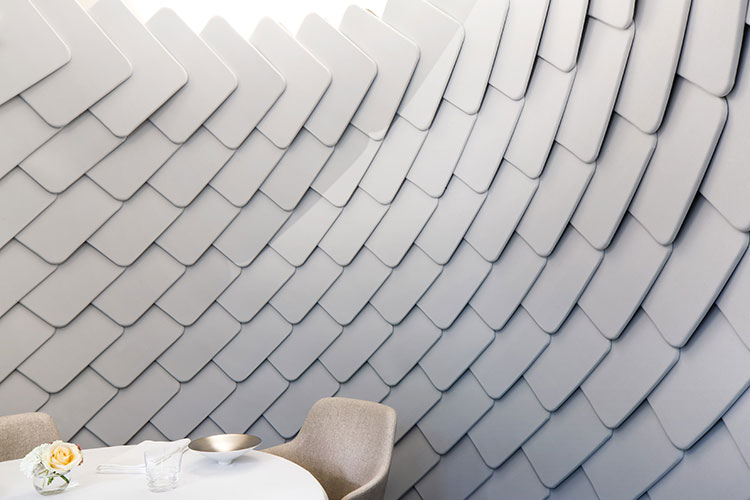 The reception was designed as a simple counter, a free terminal, that reduces the distance between guests and staff. It is made of lacquered MDF, also used for the side table and bench. behind a flush door are the back-offices and luggage storage. The Restaurant Girardin contrast starkly with the renaissance exterior and rusticity of it’s setting. 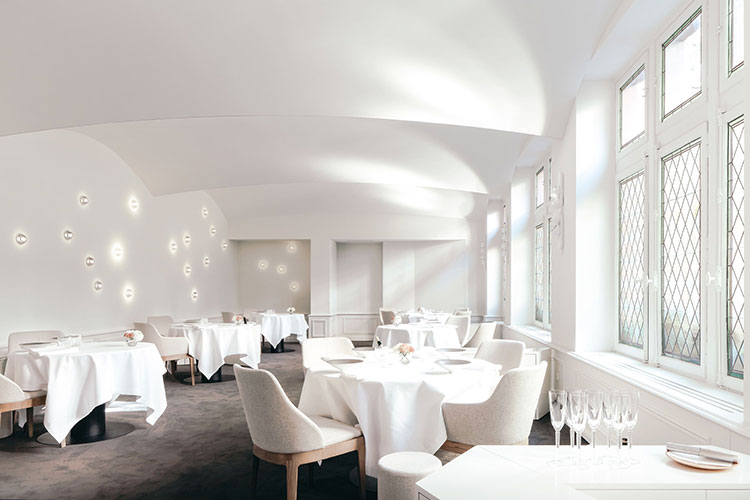 The only trace of the exterior is in the listed stained glass windows facing the court. The ceiling consists of a succession non-uniformly curved surfaces, a modern interpretation of the traditional vaults. While referring to traditional clerical and monastic architecture for its sense of calm and introspection, these surfaces are finished with a special coating in order to achieve a perfectly balanced acoustic environment. The walls are painted white, with traditional baseboards and lower panels. 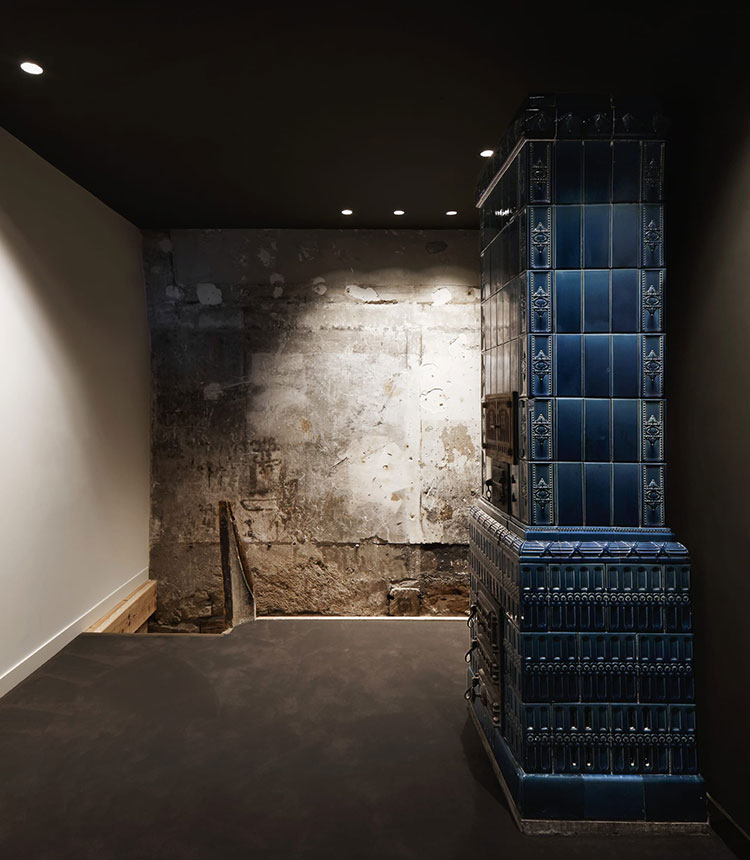 A hybrid between a screen and yurt, The Nest is this structure that embraces and coves a table without isolating it, making for a more intimate setting, while defining the overall character of the room. It is made of a cantilevered wooden structure clad with textile scales in a geometrical pattern. The interior is white, outside colored linen that can be found on the chairs and armchairs. 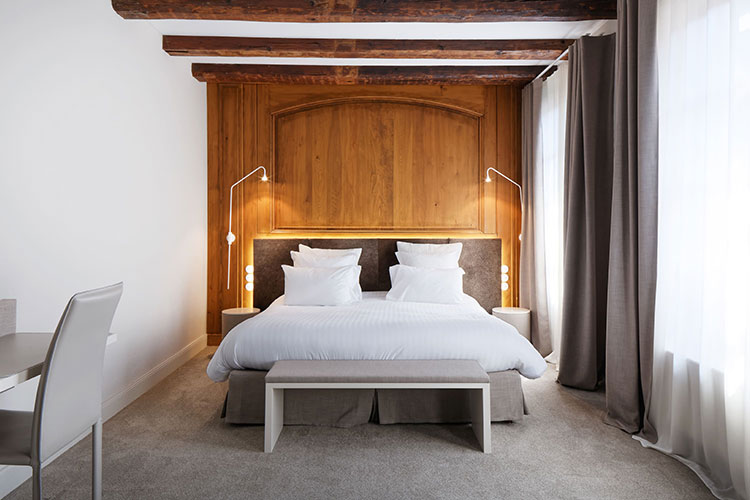 The choice of lighting partakes in the staging of the room: half spheres of cast glass sconces scattered on the wall for mood lighting (materials reminiscent of stained glass) and directional lights on the opposite wall for an indirect light via the vaulted ceiling. Finally, wedge-shaped mobile carts in white lacquered MDF allow to compose and divide the space in a flexible and variable manner according to the size of the tables and the number of guests planned for the evening. Some of these service carts include recesses for wine buckets, other storage space. 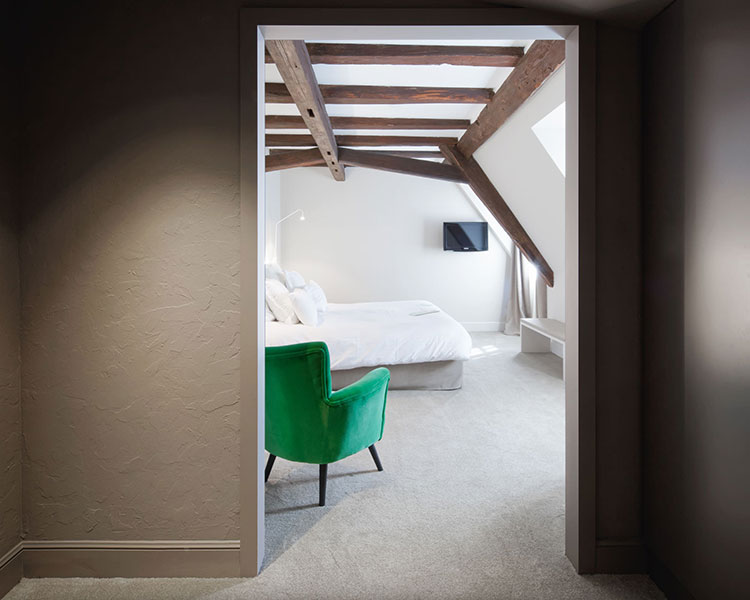 The Alsatian region is famous for its refined wines, so a wine cellar is housed underneath the restaurant. It is a place for tasting and promoting Alsatian wines, while also developing wine tourism. The access to the cellar is from the adjacent room, a backdrop to the restaurant with its old tiled stove. Here a revealed old, scratched, derelict plaster wall and dark colors announce the contrasting mood as opposed to the main restaurant space.