When it comes to revitalizing London nightlife, brothers Alastair and Nicholas Heathcote have prior experience. Everything they’ve touched in the last five years – their Indian-inspired cocktail den The Imperial Durbar and Himalayan haunt The Hill Station in Tooting, as well as their East London venture, the late-night Dalston tapas joint La Cabina – has become a hit. Now, they’ve set their sights on Balham, South London’s up-and-coming neighborhood du jour, to launch Piraña – a South American-inspired bar and restaurant located in the area’s emerging nightlife hub of Bedford Hill. 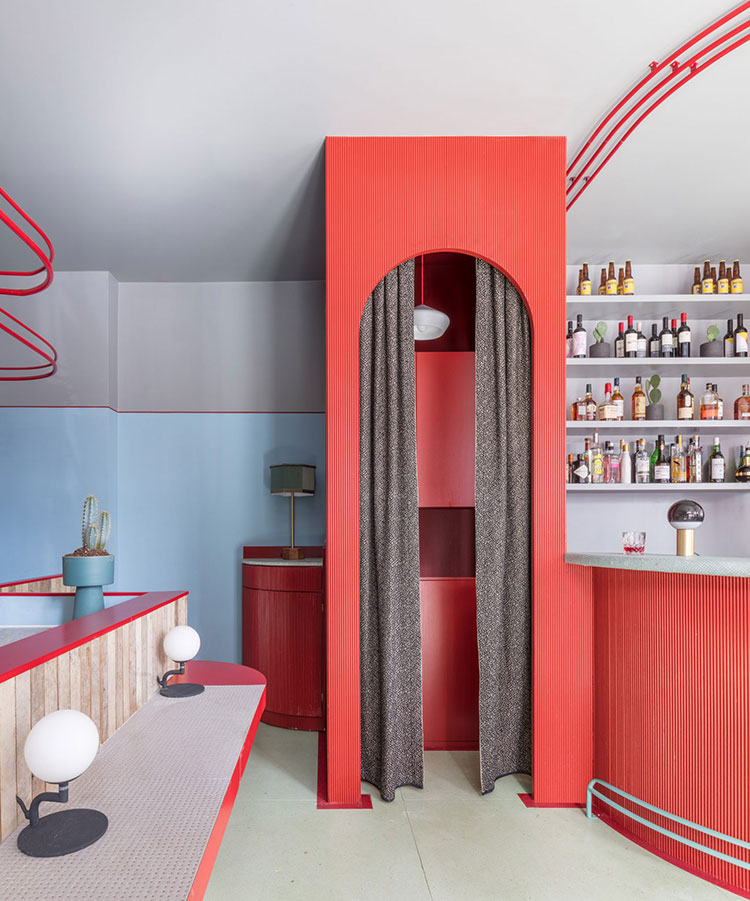 Knowing from experience that a venue can live or die on the design of the space, the brothers turned to Sella Concept – the design studio behind recent Pimlico opening Omar’s Place – and charged them with designing a new bar brand that could win the hearts of locals and had the potential to expand beyond Balham.

In contrast to Imperial Durbar – a point-by-point recreation of vintage Indian interiors – the Heathcote brothers were keen that their new venture avoid drawing too closely from the South American aesthetic, so Sella Concept founders Tatjana von Stein and Gayle Noonan resisted the soft, warm colors and traditional patterns associated with the region, and developed a bolder, engagingly retro design theme that transcends specific cultural roots. 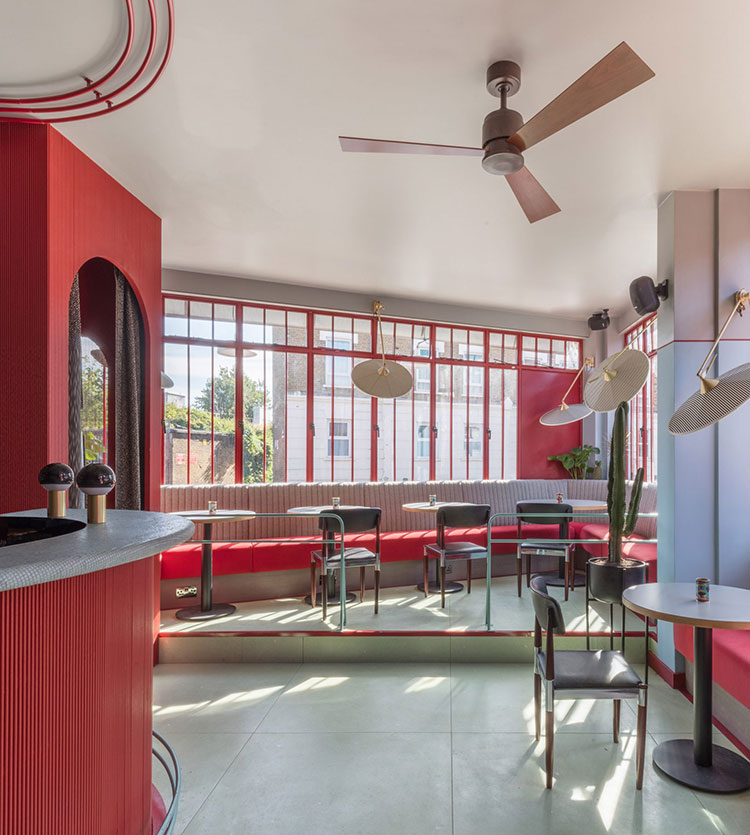 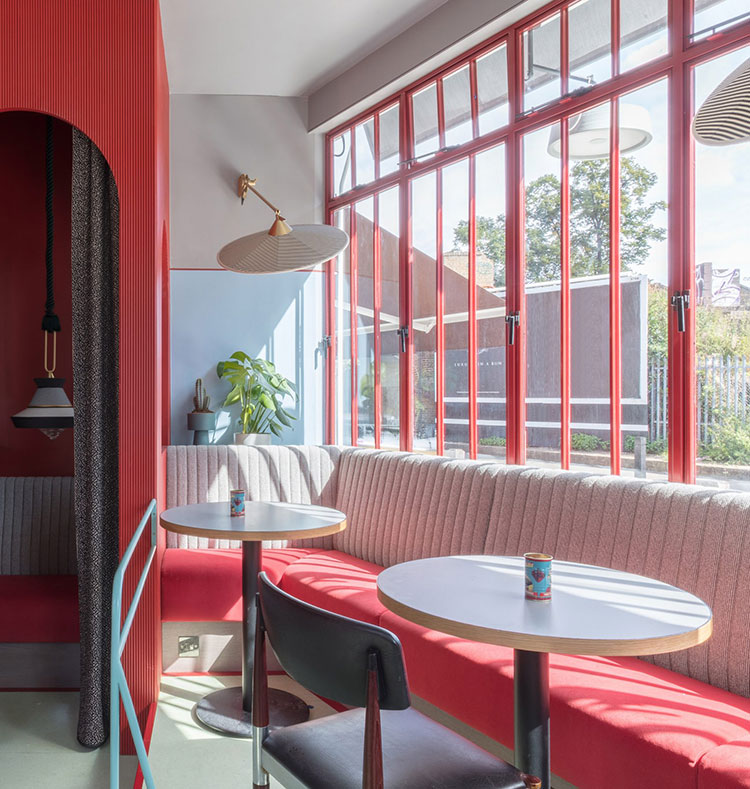 “While the food concept touches on South American cuisine, the brief was to create something unique with no particular cultural reference but that invites guests to eat and drink in a relaxed manner throughout the day,” explains Tatjana von Stein, founder of Sella Concept. “Our approach rests on colour and flow, creating spaces within spaces to drink and dine.” 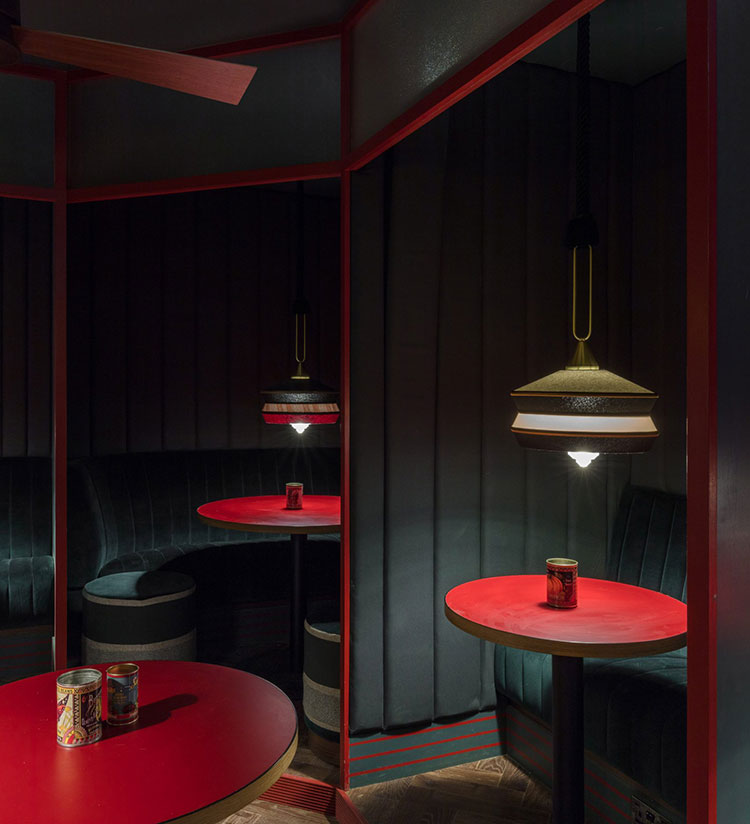 From the shell of a former restaurant, Sella Concept has conjured a fluid, immersive space, seamlessly subdivided into different areas, each with a subtly different mood. The owners were keen for the atmosphere to be casual and easygoing, with no sense of division between diners and drinkers, and this comes across in a layout governed by a feeling of flow rather than division. As is typical with Sella Concept projects, the design concept began by developing an understanding of how people will use the overall space, incorporating visual shifts and atmospheric transitions to accommodate changing behaviors within the venue.

Light and welcoming, Piraña’s front room houses a chef’s table, a curved bar, a banquette-lined platform and a ‘secret’ snug with a private bar hatch. The back room is darker and more indulgent in tone, lined with cozy and intimate private booths, from which customers can call the bar directly. These distinct but connected zones allow Piraña customers to use the space as their mood and preference dictates – whether they fancy sociable casual dining and drinking or a more private personal experience.

“We are both fascinated by the psychology of behavior behind the design and the question of how to encourage behaviour through layout, design and materials – what design makes us feel,” says Tatjana von Stein. “Our favourite projects are those that allow us to answer one question: how can we transport an audience?” 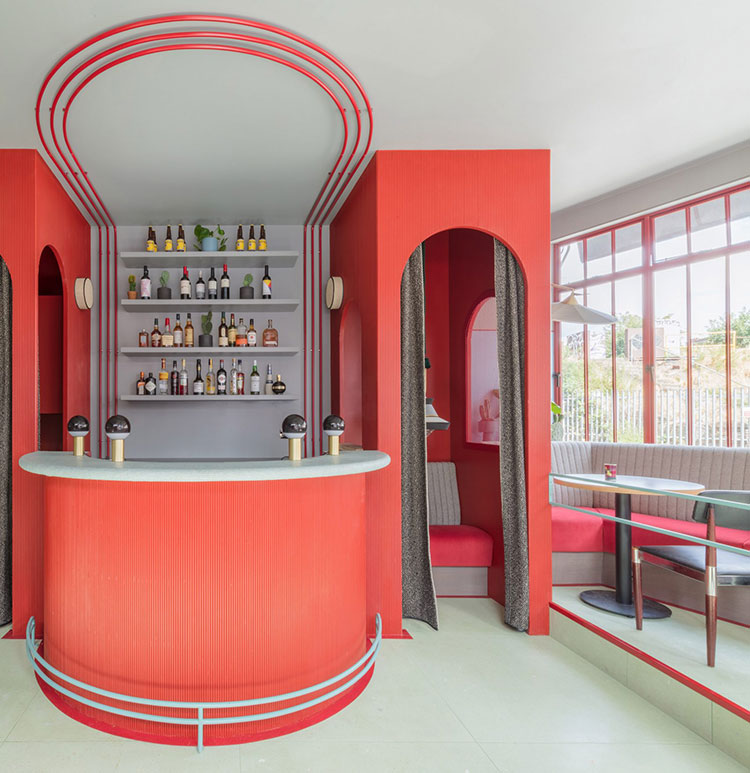 Designed to catch the eye with its bold colour combinations, the exterior has been styled with mosaics of blue and white tile and striking window façades dominated by a red metal framework. Inside, Piraña’s playful, trend-agnostic aesthetic is created through the use of a rich, sensory palette of colours and materials, including a bespoke floor in jade terrazzo (created in partnership with a fabricator in Spain), micro mosaic tiling at the bar, and a deep, earthy red in the upholstery and the curved timber slats that ties the space together. For

Sella Concept, a studio known for its love of warm pastel pinks, the Piraña interior represents quite a departure. Apart from the chairs and lights, every fixture and item of furniture in Piraña has been custom designed for the space by Sella Concept – including the booths, bar, banquette, tables, stools, floors and bathroom sinks – and, unusually, the studio worked directly with the building contractor on the renovation, without involving a third- party architect. 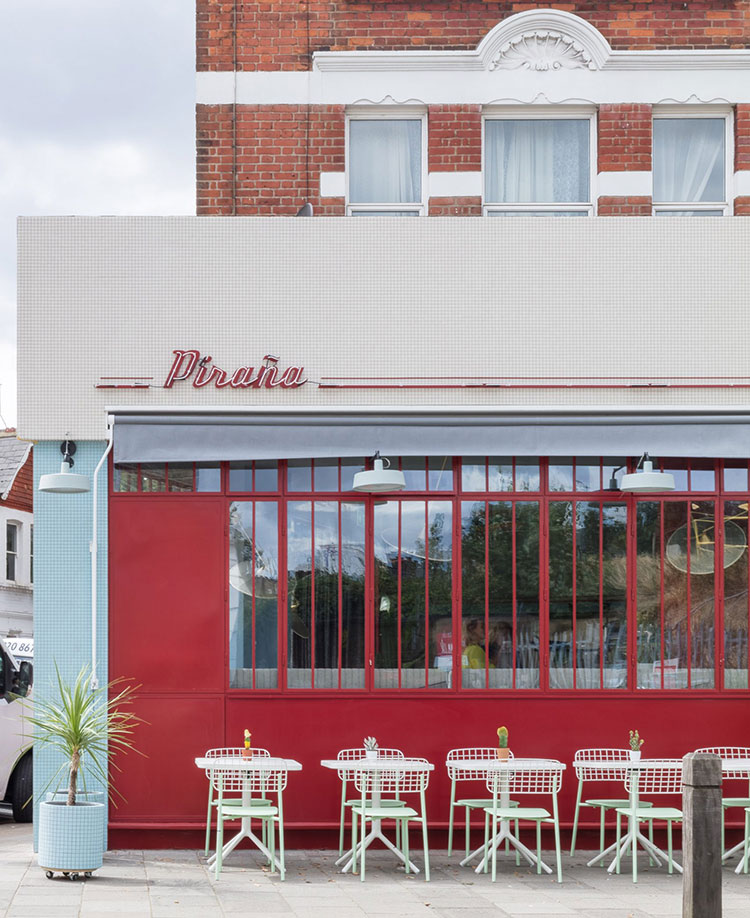 Taking advantage of Gayle Noonan’s background in graphic design, Sella Concept has also created Piraña’s visual identity, deployed on menus, business$cards and online – ensuring that the character and style of the restaurant carries smoothly onto all brand collateral.

The result is an unusual and inviting venue that somehow packs a host of different atmospheres into a comparatively small space, and a bold new bar brand for Balham.