Designed by the noa* – network of architecture on the high plateau of Renon in South Tyrol, Gloriette Guesthouse stands out for its unusual cantilevered outdoor swimming pool. The former small hotel business Bergfink, which was an anchor point in the village structure and nestled amidst the rural-urban structure with all its bourgeois domiciles, built by wealthy Bolzano merchants around the turn of the century, was demolished and a new jewel was created in its place. As the name suggests, it is a gem in the landscape, inspired by the architectural typology in timelessly, elegant Art Nouveau. With the feeling of an era in which, – not at all pompous – the architecture of the city in a simplified form and without giving up completely on luxury and comfort on the Ritten transposed – generous, classic, simple, but not sober. 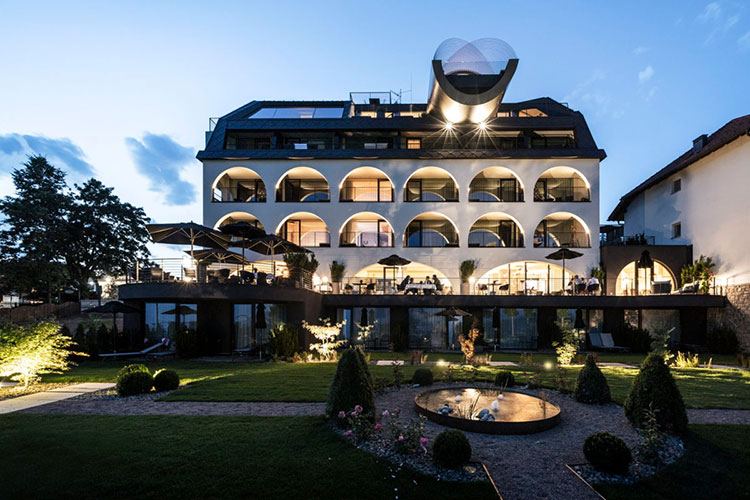 It was essential for noa* to incorporate locally prevalent elements, such as the arches in the façade, or the hipped roof, which looks back to a long tradition in the village of Oberbozen. At the same time, the rhombus is included; a decorative element that appears amongst the many railroad-houses along the Ritten railway, which connects the different summer holiday destinations. The holistic design approach is clearly visible: numerous details form a common thread running through the entire project. An interesting aspect is the organization of the hotel that sophisticatedly adapts to the topographic circumstances.

The garage thrones the building and its 25 guestrooms, and on which the hotels park extends, from which the seven garden-suites and their private gardens can benefit with delight. Looking over the garden, one can find the public spaces: reception, lobby, the restaurant and it’s extending terrace, which gracefully curve out overlooking the garden with a view that extends to the far horizon. The blueprint and façade are developed in a close dialogue: what is hidden behind the façade can already be seen from the outside in a unique and unmistakable way, without revealing too much of what goes on in the inside. 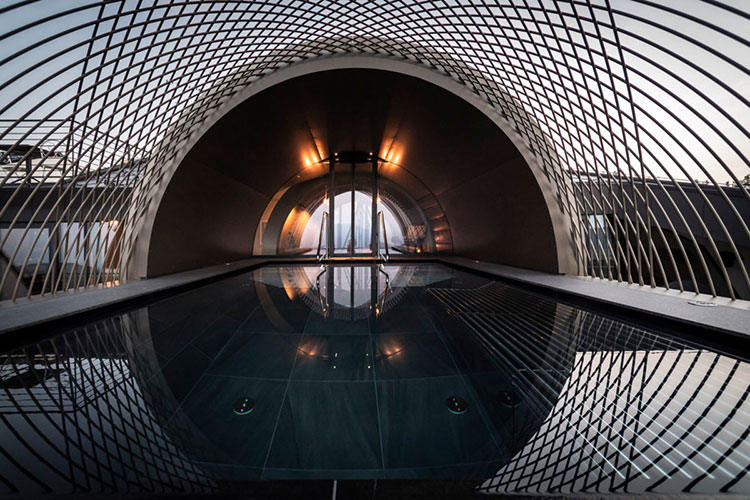 Above the public spaces, the guestrooms are located on three floors – with the suites on the respective edges of the building, clearly recognizable by their cubic bays, that set a confident architectural accent to the building’s façade. What begins on the ground floor as a flat double arch at the façade, develops through a significant leap in dimensions, into a concise uniaxial arched façade in the floors above. This allows the quality of the outer spaces to become more visible and tangible for the summer retreat. It is especially in this area behind the arcades, where inner and outer space merge – the loggias function as connecting elements, and with the frameless windows the room seems to continue as far as the parapet.

The landscape is captured by the reflective black glass elements, which are used as balcony partitions dividing the rooms and which optically multiply the arched view. On the very top, clearly detached and with its hipped roof almost appearing as a building on its own, sits the wellness area. Here again, unmistakably, the element of the arch, which, as a bronze-colored shell breaks through the roof structure and – positioned asymmetrically – sets a confident statement for a particularly lively architectural language.

The timelessness of the Art Nouveau buildings at Ritten entail is captured in the interior and carried out in an abstract manner. At the same time a kind of clear, contrasting and consistent framing of elements forms a recurring detail, which can be traced throughout the entire building. Also the theme of the arch finds its continuation in the interior, for example in the rooms as a mirror that is rounded at the bottom, as a fireplace in the lounge, where the arch is extruded around its own axis, or as the lounger’s backrest at the spa terrace.

The furniture is mostly freestanding and loosely positioned, elegant and plain upholstery enhance the ambience. Amidst everything are unique finds from flea markets or little treasures from the previous hotel. Dispersed throughout the building are golden lamp sculptures hanging from the ceilings. In the public area, a seamless resin floor was chosen as an element to allow the room to flow continuously. “Islands” with wooden flooring were created within the floor, that define the different areas of the lounge and restaurant. 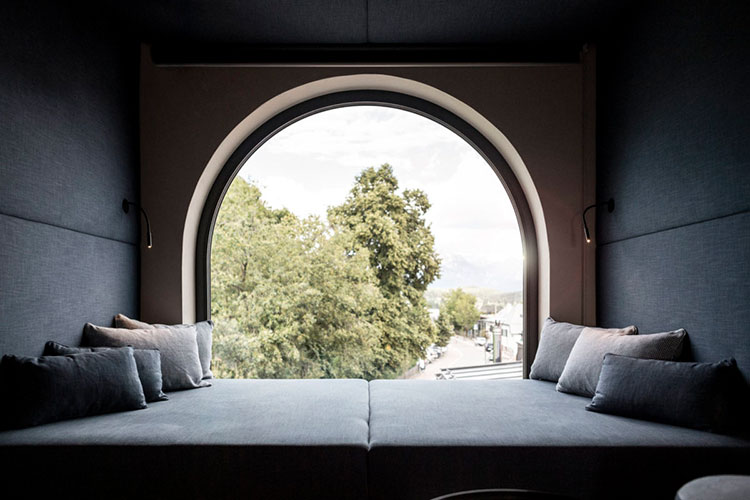 This concept is also applied to the spa on the top floor. Not only in the public area and the spa, but especially in the guestrooms and suites, a passionate focus on the interior is omnipresent. Special attention is paid to the suites’ bay windows, which offer lounge areas with a fireplace, free-standing bathtubs or sofa landscapes.

Spaces are defined with room-in-room shells, where wall, floor and ceiling are furnished with the same material. The appealing and inviting atmosphere is also achieved through the use of wood, which never appears rustic but noble, homogenously plain, without being cold. 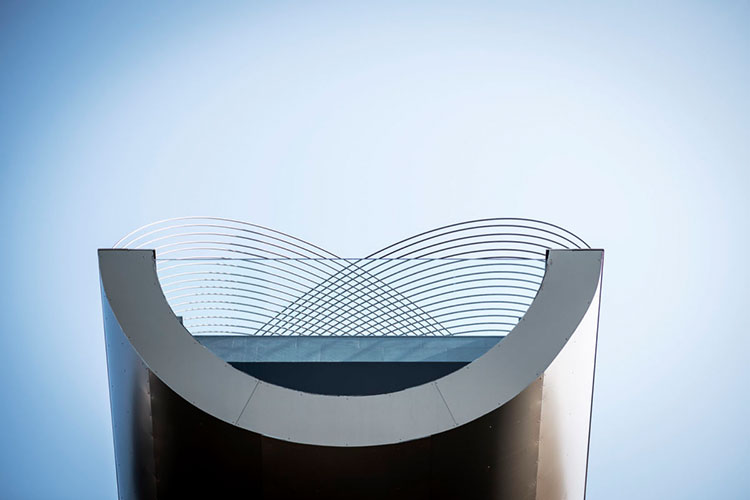 Certainly, the biggest highlight, already visible from far off, is the spa area, with its extravagant cantilevered pool. In the spa area one finds expansive rest areas retreat zones, as well as some intimate terraces either on top of the bay windows, or cut into the roof, for a rest in the fresh air. A unique eye-catcher is the sweeping cylinder, which on the south side of the building drills its ways into the hipped roof and protrudes on the other side of the facade an upside-down arch, serving as the exceptional pool.

The shell, in which the pool is enclosed, is covered with the same bronze-colored aluminum panels as the outside of the cubic bay windows. It forms a caesura to the dark brown hipped roof and allows for a fascinating play of reflections. On the inside, a few stairs lead to the center of the cylinder. The automatic sliding door opens and one descends into the water, accompanied by the curved shell, one is lead towards the horizon in the infinity pool. Nearly six meters deep, the curvature, the transparency and the gentle reflection create some sort of sculpture that reaches into the interior. 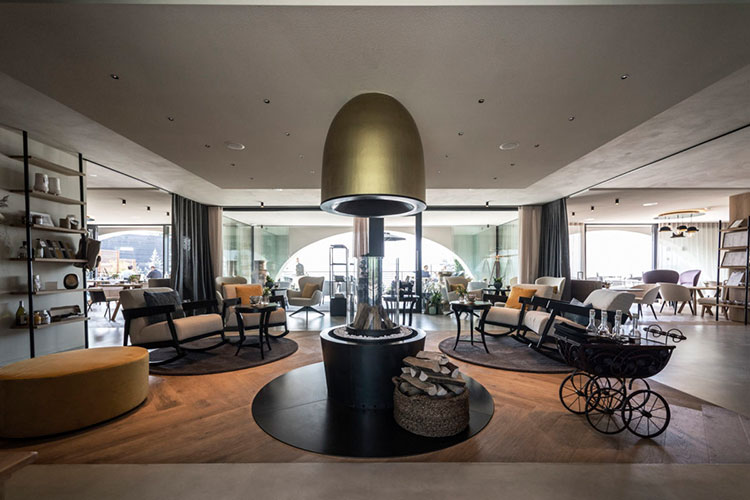 When entering from the rear end, the pool is covered with a bronze-colored rounded shell, which increasingly dissolves into a rounded net structure of poles, until one swims out under the open sky: an interplay between metal and water that creates a transition into boundless freedom. It is a process of soft fading out that dissolves this cylindrical shell and thus triggers the feeling of floating while enjoying the distant view. This almost sculptural appearing structure of poles is yet another interpretation of the ever appearing arch and the rhombus – closer observation allows one to see that the curved poles create a rhombus when intersecting. This may well be the summit of a journey that might have been imagined even before entering the building. 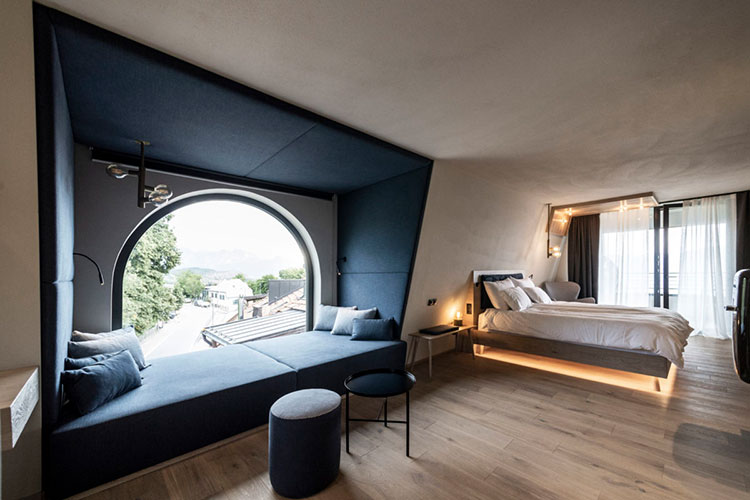 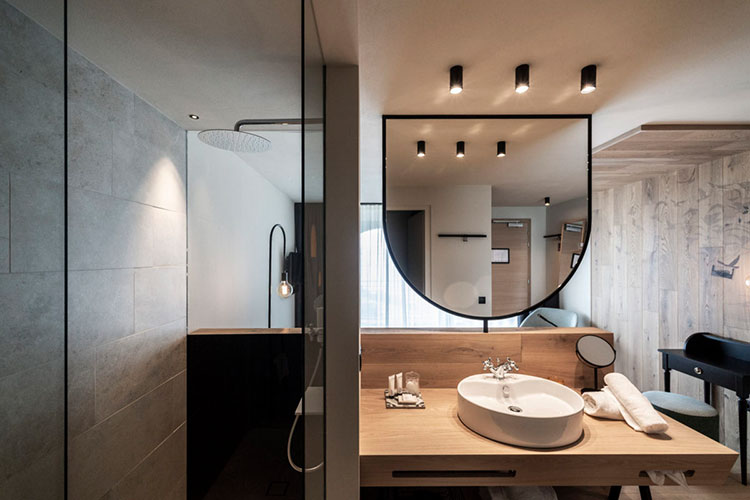 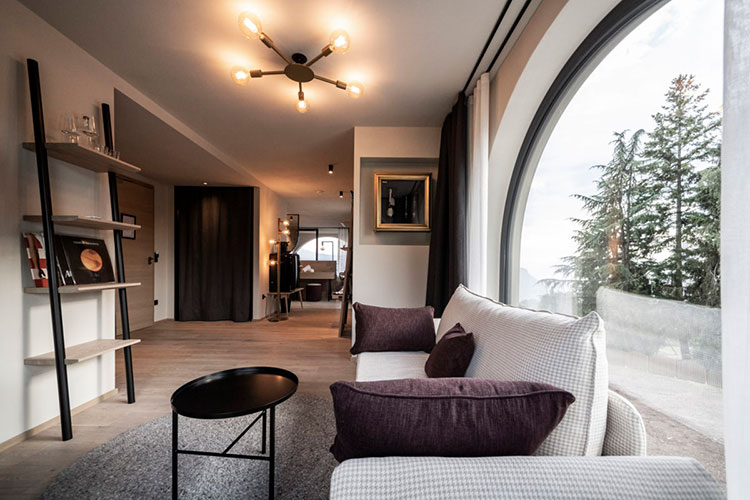 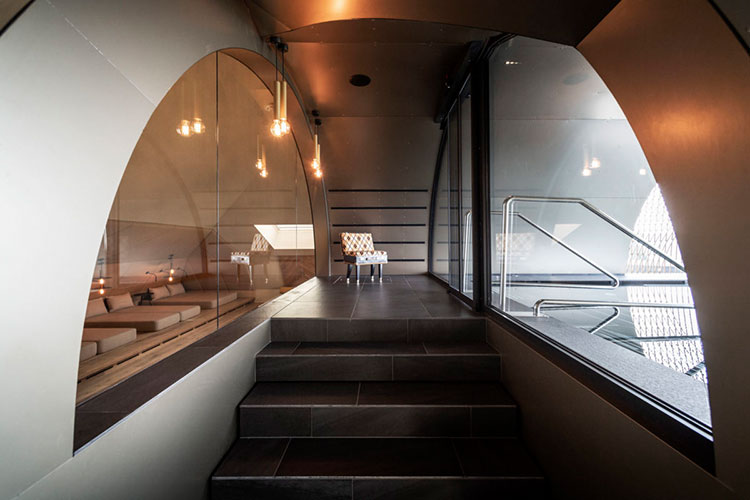 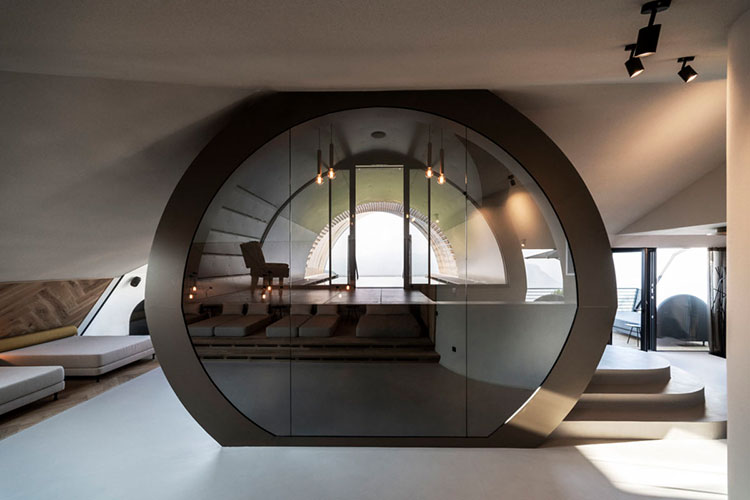