Junzi Kitchen is at the forefront of a new wave of Chinese cuisine in the US. Launched in 2015 by a couple of Yale students, Junzi Kitchen has opened a new venue designed to embrace the all-time dynamic street life of New York‘s Greenwich Village, which was once regarded as a paradigm of urban dwelling. Occupying a corner space with large windows stretching across the street-facing walls and an open panelized storefront folded on both sides, the dining room becomes an extension of the bustling street life outside. 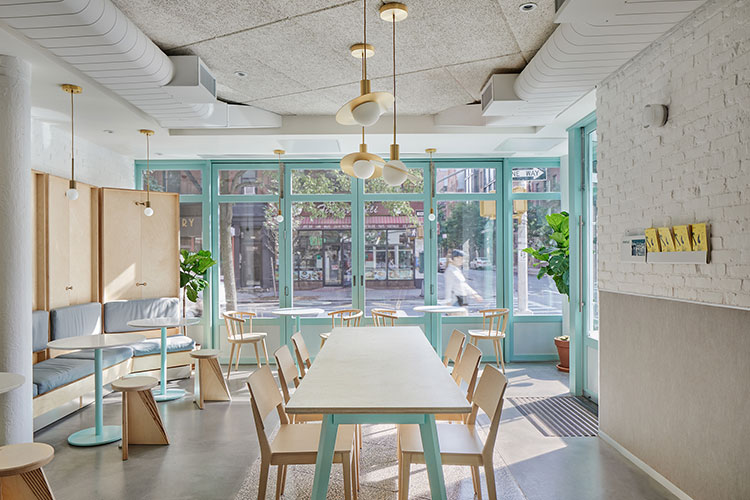 Flooded with natural light, the front dining room houses two communal tables at center, while birch banquette seating upholstered with light gray leather lines the back wall, accompanied by white marble tables atop mint green bases throughout the room. A bar counter at the back is tiled in mint green, with illuminated metal mesh hanging above, reflecting the street vibes of the neighborhood. The floor is primarily poured concrete that blurs the boundary between the street and the restaurant, accented by a silver-inlaid grey-and-white terrazzo tile rectangle, where the communal tables sit.

Beyond the bar is a tiled counter where food is ordered and prepared. A corridor to the left connects several niches on the white-painted brick wall for display. A light pink neon sign illuminates where guests lining up to order, adding a contrasting tint to the color palette. The corridor ends at the back room—a smaller, quieter dining area with art displayed on the walls. 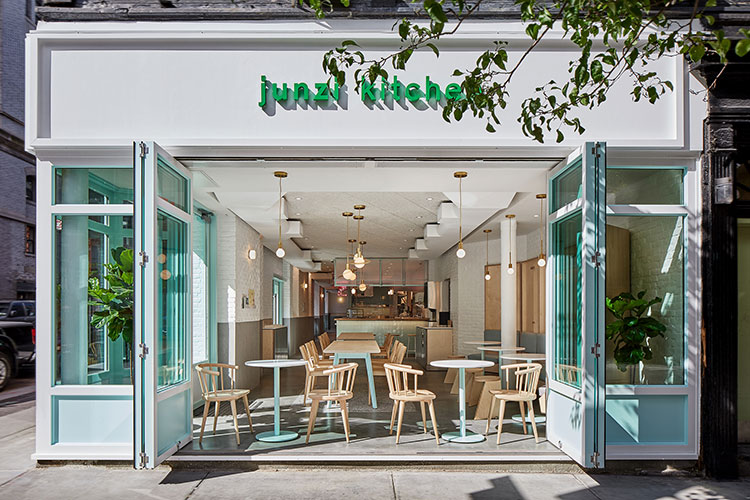 In an effort to reframe the perception of Chinese culture in the US, the design team refrained from using traditional, clichéd patterns or symbols, instead chose to play with simple form and contrasting color palettes. “The color inspiration came through a childhood memory of the early spring season in Northern China, when this type of food is made by families following the lunar calendar tradition. Mint-green color against snow white, along with warm texture of natural birch, the combination perfectly captures the look, the fresh smell and the spirit of germination and growth, which is the key to the ambience of the space,” Xuhui said. 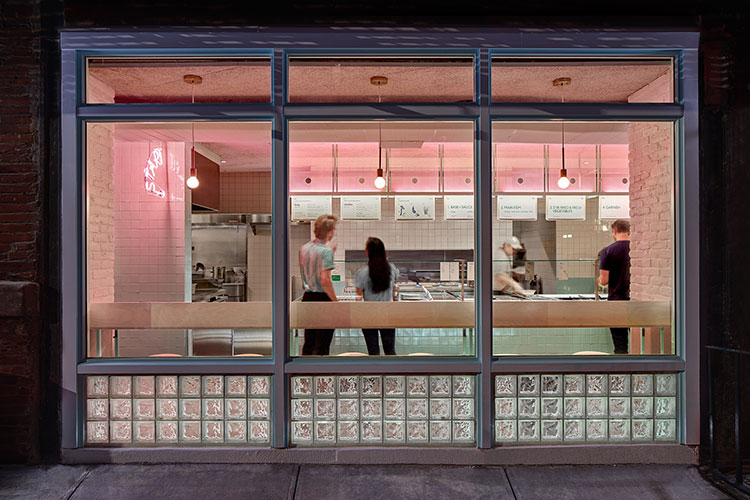 Custom made, mint green porcelain tiles cover the service counter, contrasting with the white-brick and light grey concrete lining the space. Different faces of the storefront are meticulously finished in mint green and white, creating a pure white visual effect along the street-front, blending in with the landmarked building aesthetic. Brass pendant lighting hangs from the ceiling, providing a metallic accent, illuminated by milky white spherical bulbs that transition the space’s ambience from day to night. To accommodate multiple services within one space, the design team introduced a versatile floor plan, along with a lighting system that renders dynamic colors and shades throughout the space, to adjust the vibe with changes of music, menu and time. 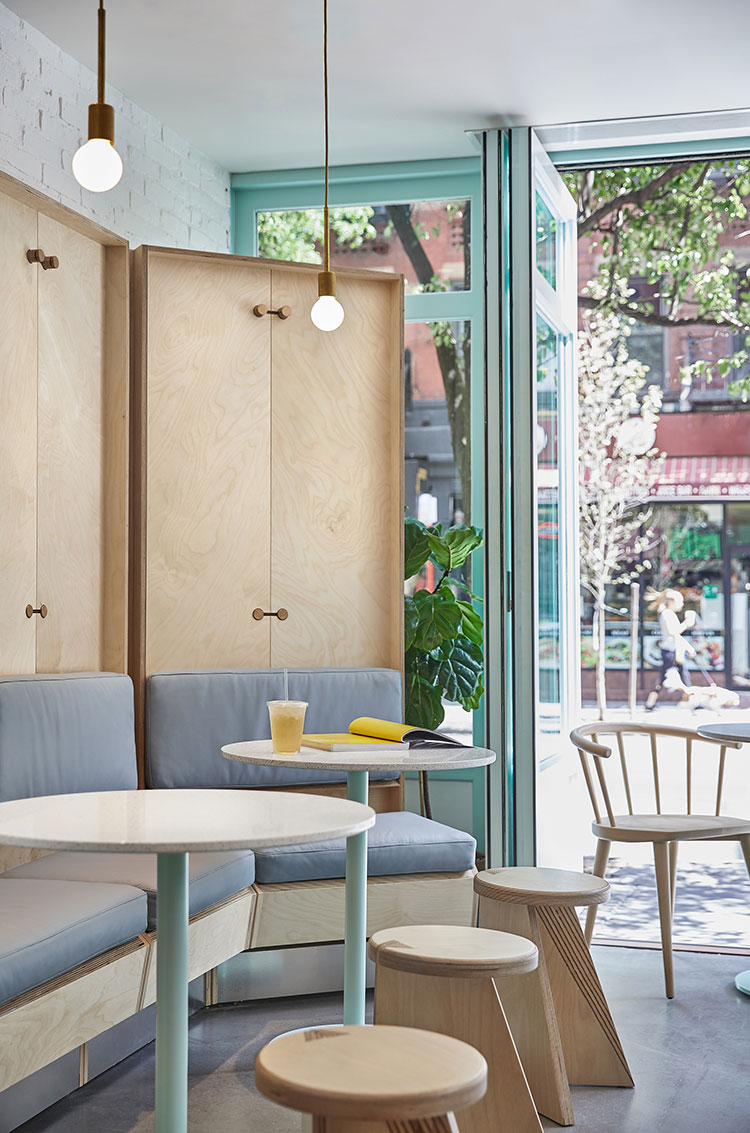 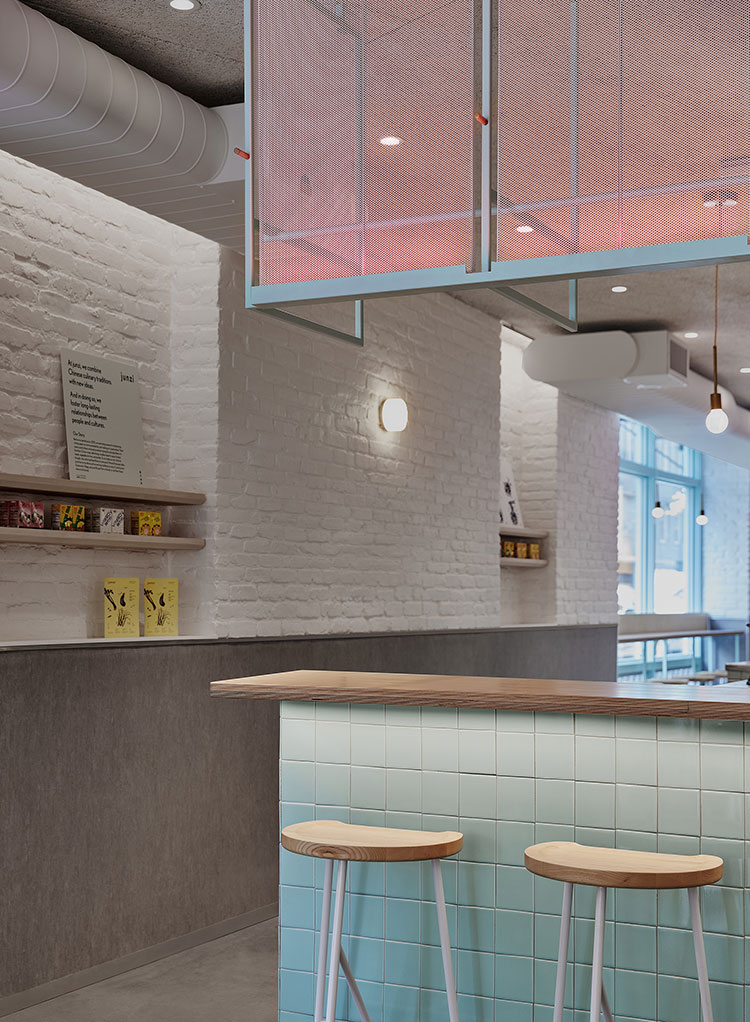 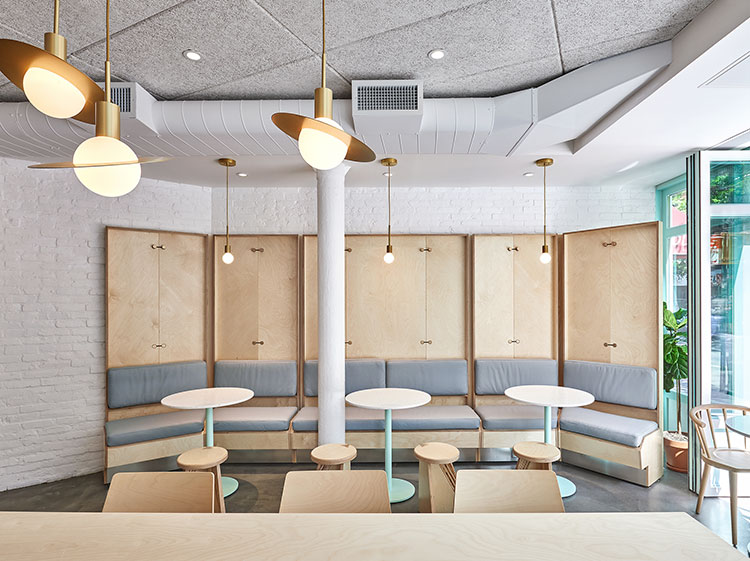 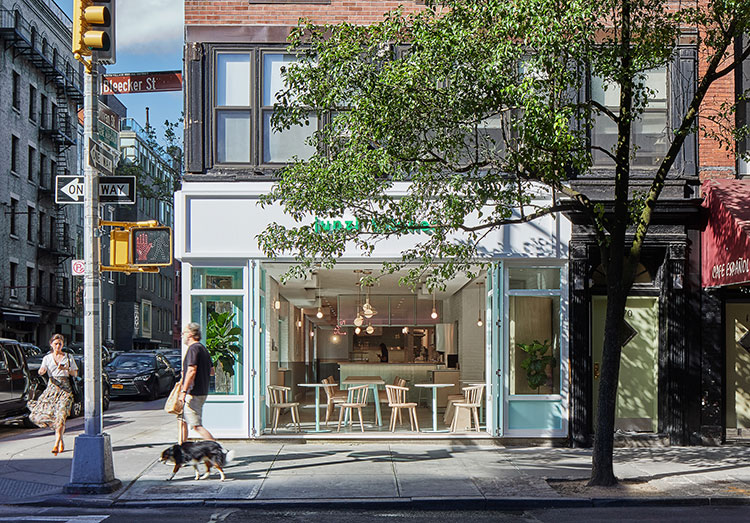