UK practice Studio Mutt has designed a new store for British menswear brand Universal Works at the recently opened Coal Drops Yard in London. The architecture aims to retain and exaggerate the character of the existing building, revitalized by Argent and Heatherwick Studio. The project consists of a series of large sculptural insertions: a theatrical full-height mirrored wall set at 45 degrees to the space, green metal hanging and shelving units clamped to cast-iron beams, monumental red cedar blocks and long linear light fittings. 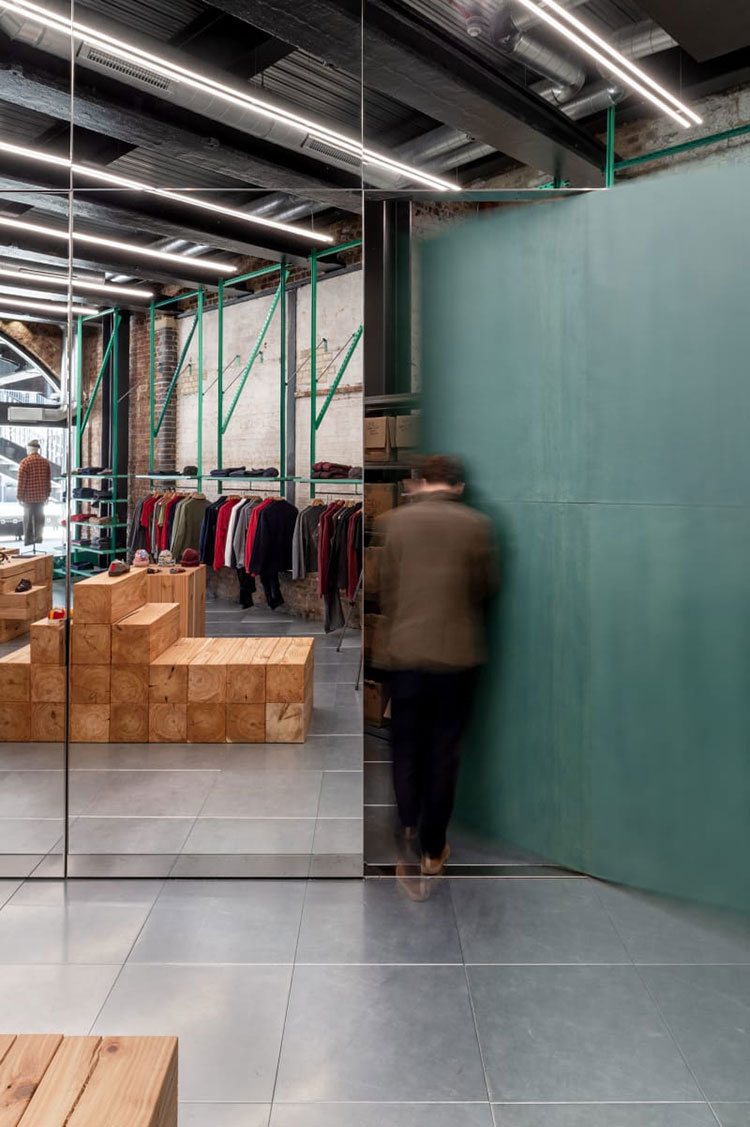 Studio MUTT were appointed by Universal Works in late 2017 to act as architect and creative partner for their future stores. The brief was to determine how an approach to clothing can translate into an approach to architecture. Studio MUTT developed a functional and vibrant style that responds to the layout out the building and could be tailored to subsequent sites. Coal Drops Yard is the second in the collaboration following the Soho store at 26 Berwick Street.

The store is located in Coal Drops Yard, a new landmark development and conversion of two 19th century railway buildings by Argent and Heatherwick Studio’s in Kings Cross. Studio MUTT’s design retains and enhances the industrial character of the archway space by exposing as much of the existing building as possible and inserting individual joinery items where needed A bold and honest material approach was chosen to compliment the original interior: everyday, commercial materials, such as Unistrut channels and Kingspan aluminum raised access floor systems, have been used as distinctive finished surfaces. 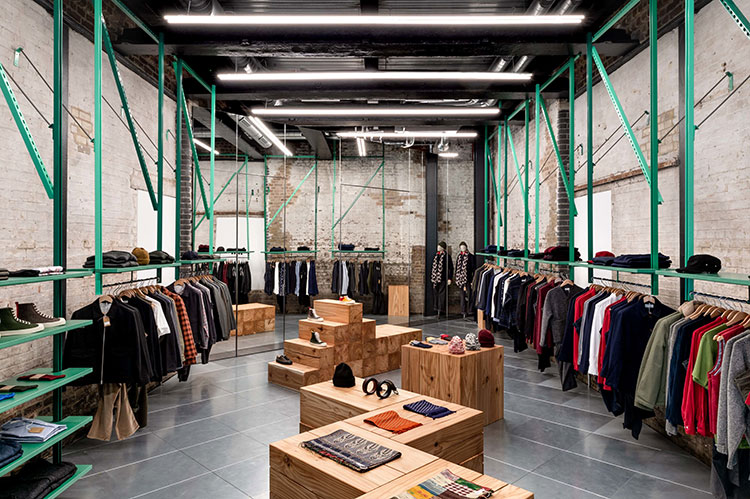 The stand-out feature of the store is a 4 metre tall mirrored wall set at 45 degrees that both separates the front and back of the store, and adds a creative illusion of volume and depth to the space. This is animated through three pivot doors, the main one being on a central pivot and able to rotate through 360 degrees, adding a sense of theatre to the banality of back of house storage. The reverse of the wall is lined in green-stained oak, which also continues to envelope the changing rooms and adds warmth and texture to these intimate areas. 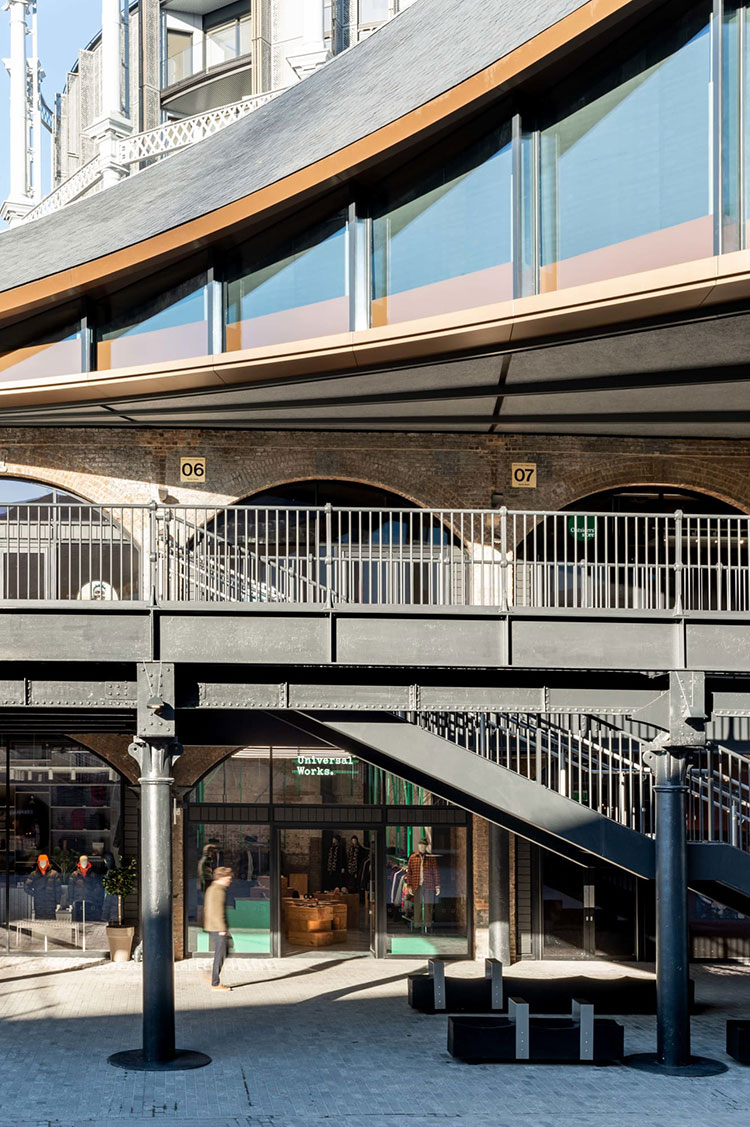 Lighting from bespoke linear fittings, designed in collaboration with Inessa Demidova, is uniform and bright and offers an alternative to the warm spotlights often used in retail. The fittings sit between Victorian cast iron beams and exaggerate the grid of the building. Like the joinery elements, they are monumental insertions into the unit. Merchandise is displayed on green powder-coated Unistrut hanging and shelving modules, clamped to the Victorian beams above. The range of vibrant greens used are reminiscent of equipment in the mills and factories so influential to the collections of Universal Works. Loose items are displayed on large red cedar blocks, fabricated by Gareth Neal, which come together to create sculptural forms for displaying folded garments and act as monumental moth-repellent blocks. 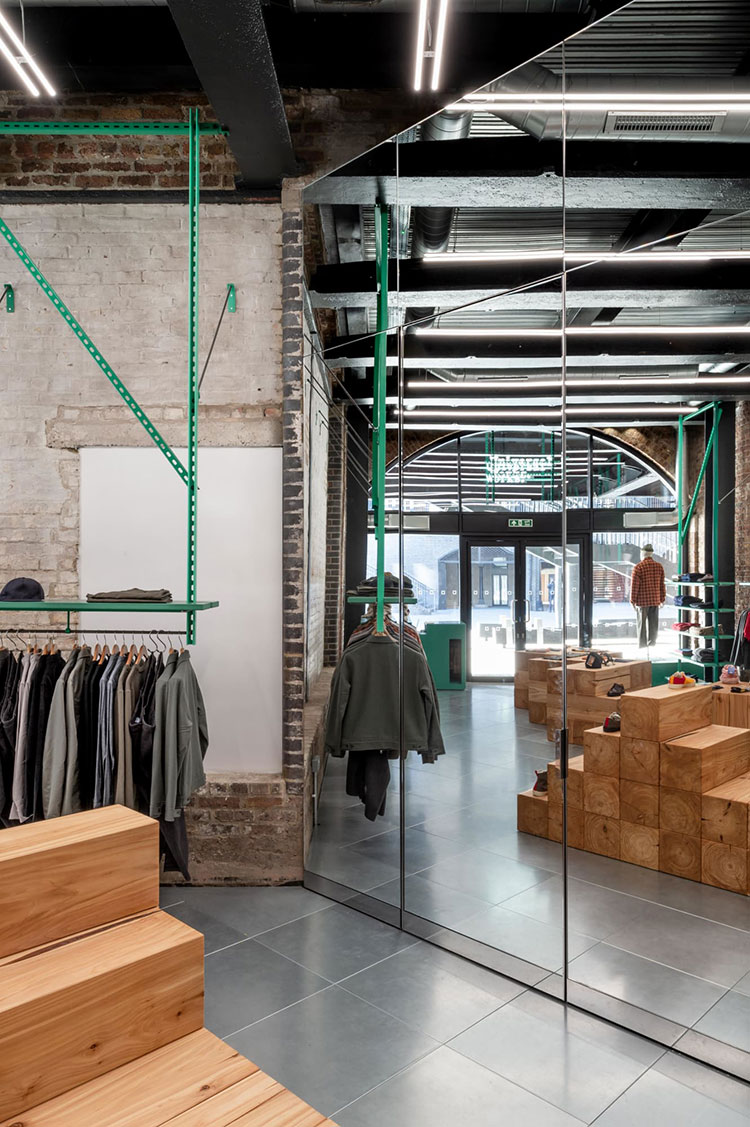 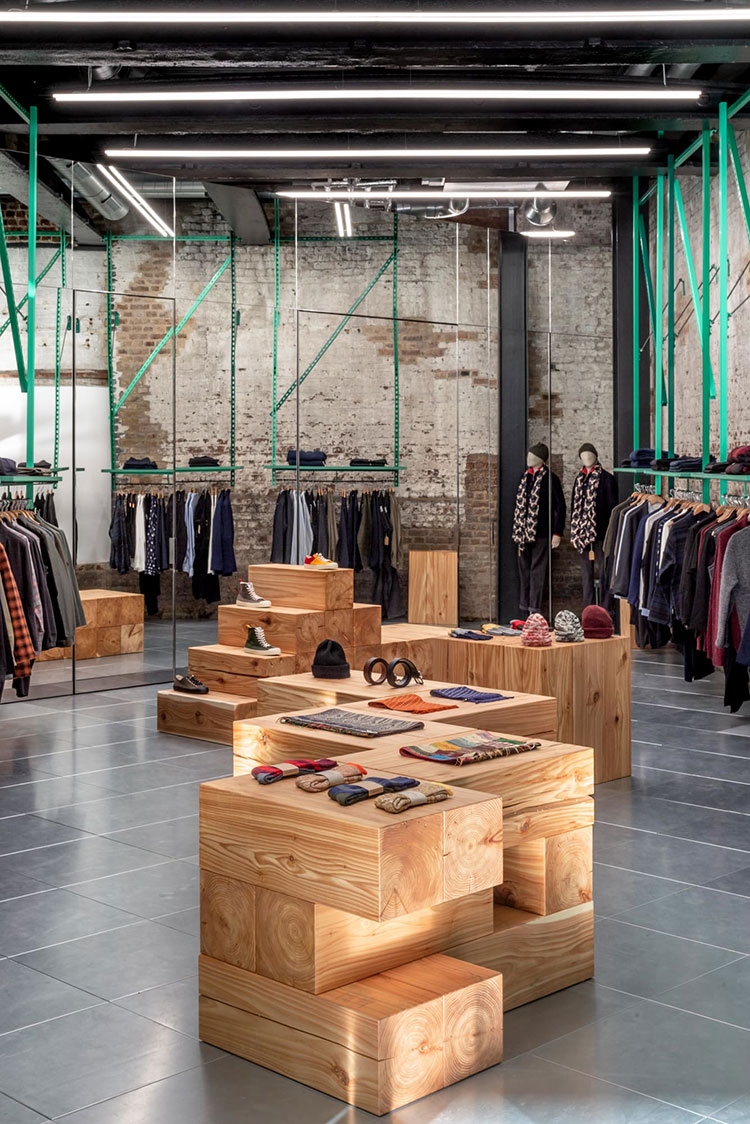 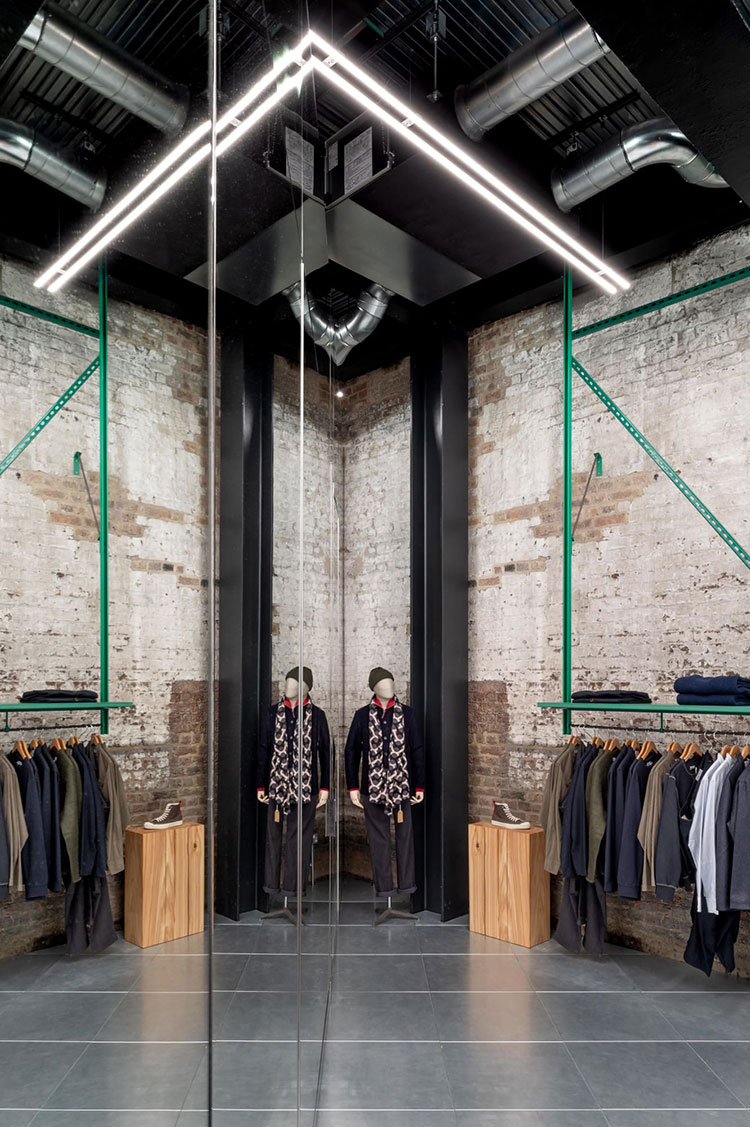 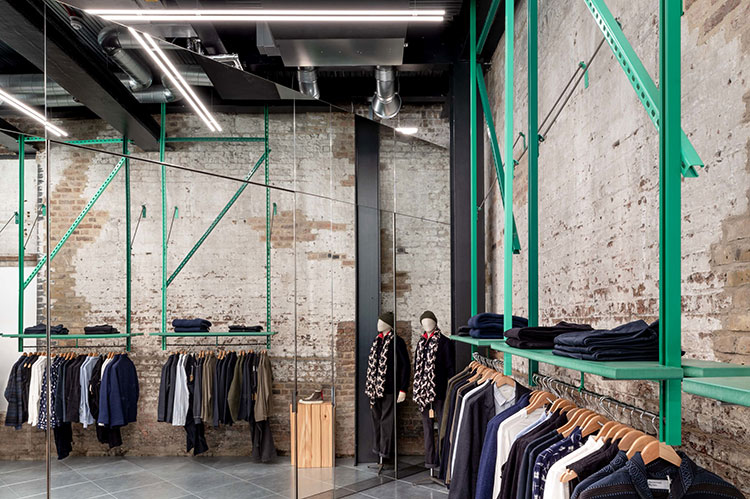 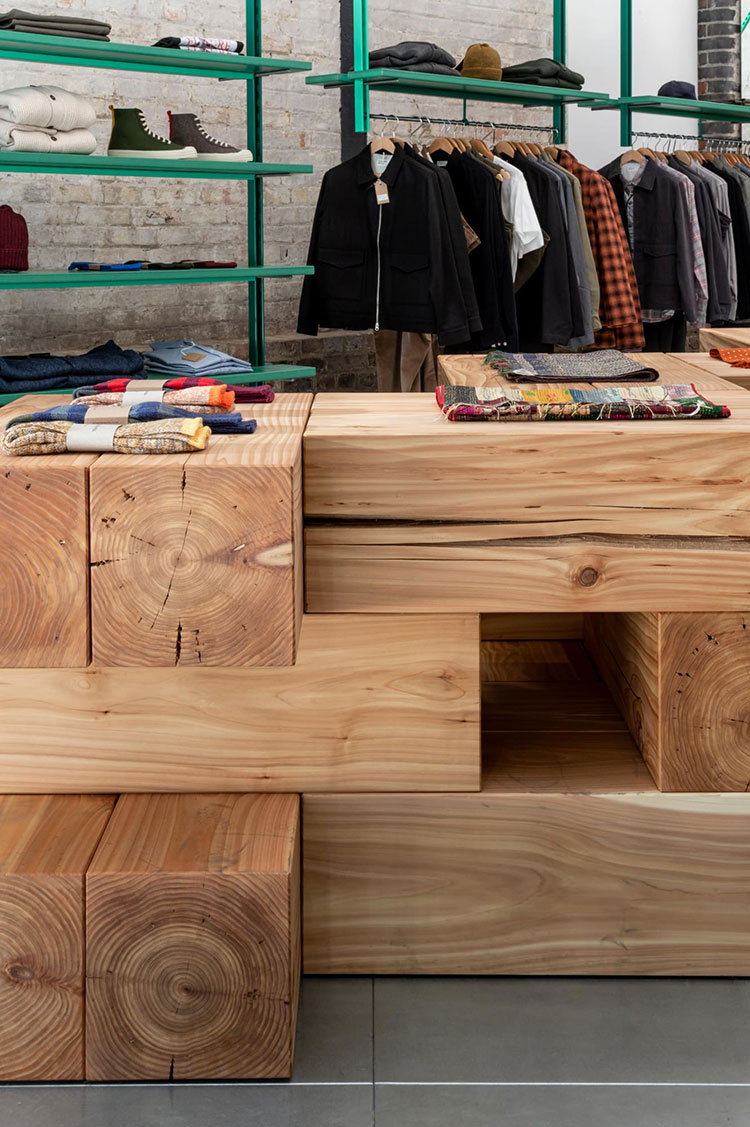 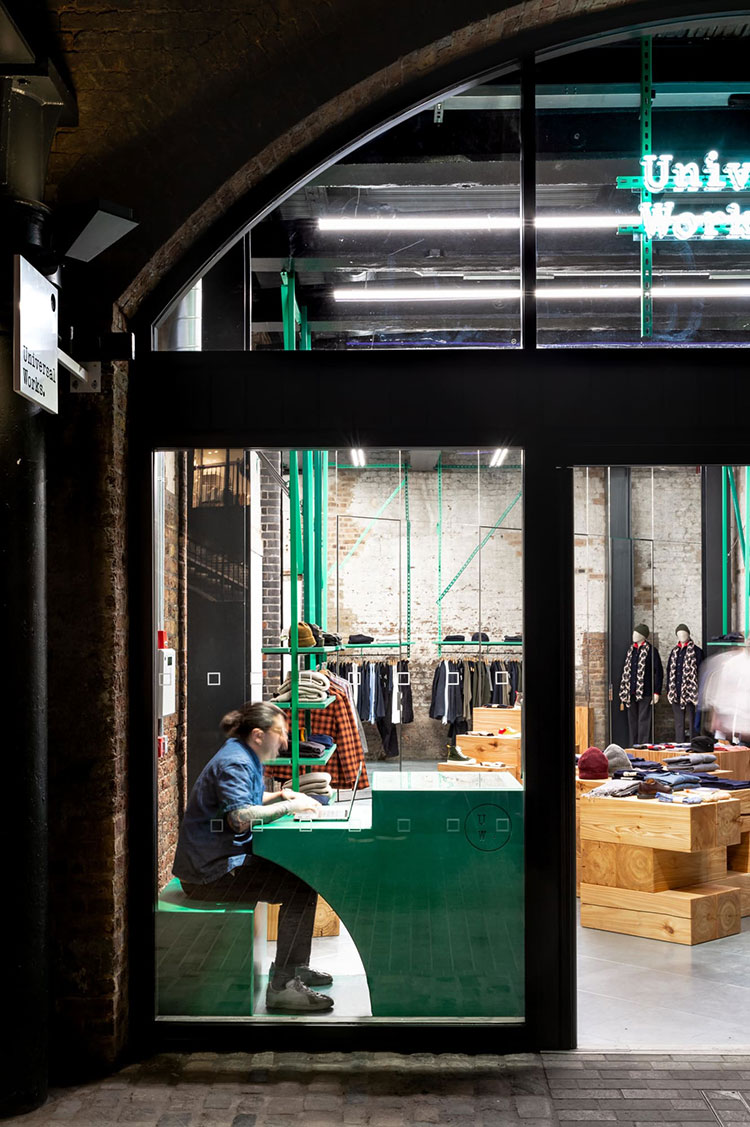 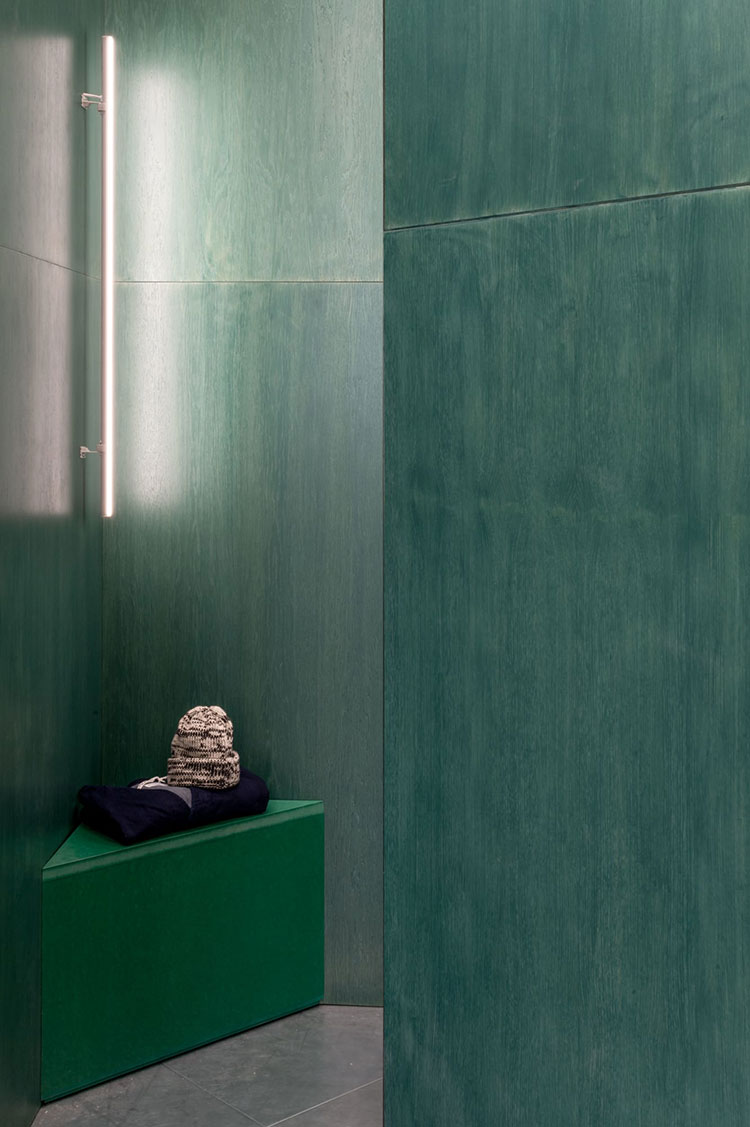 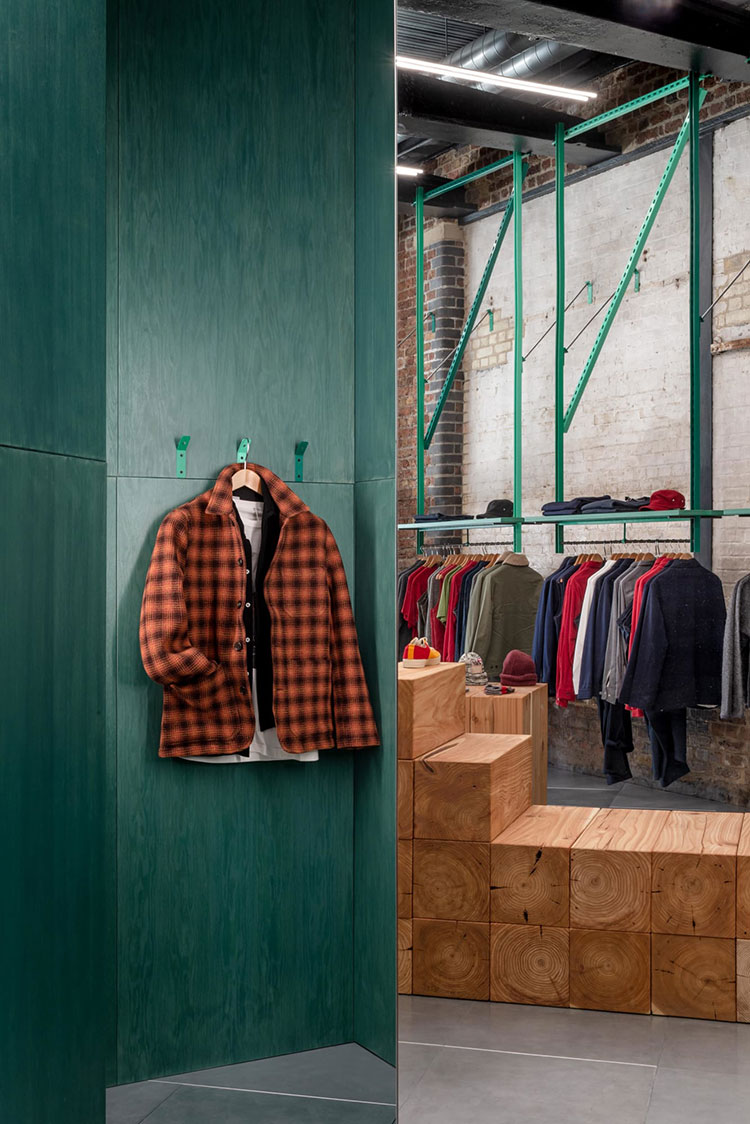 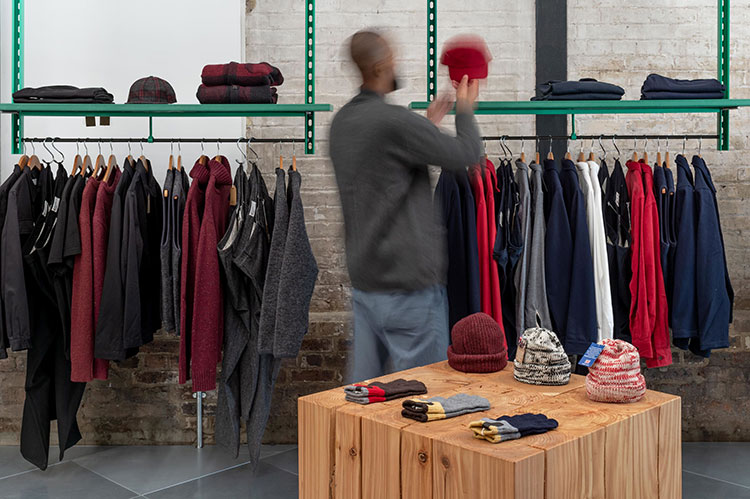 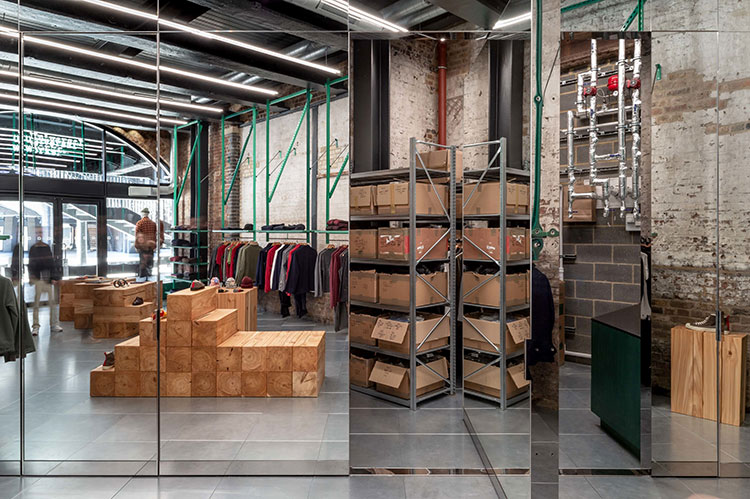 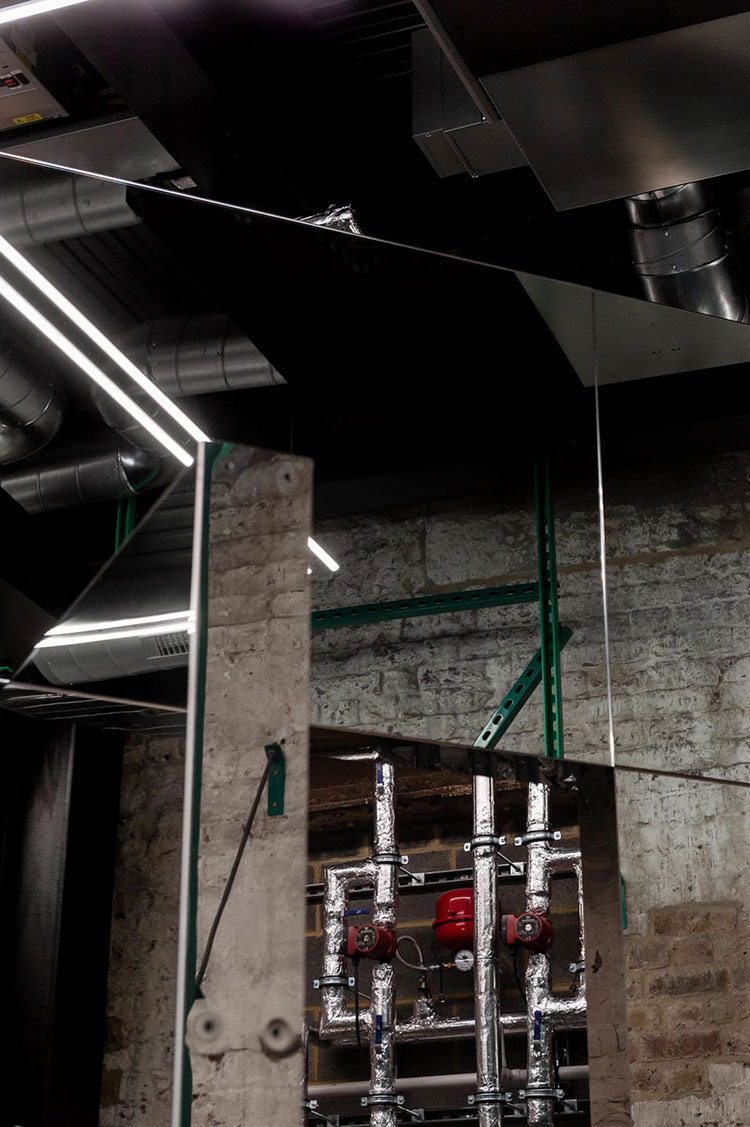 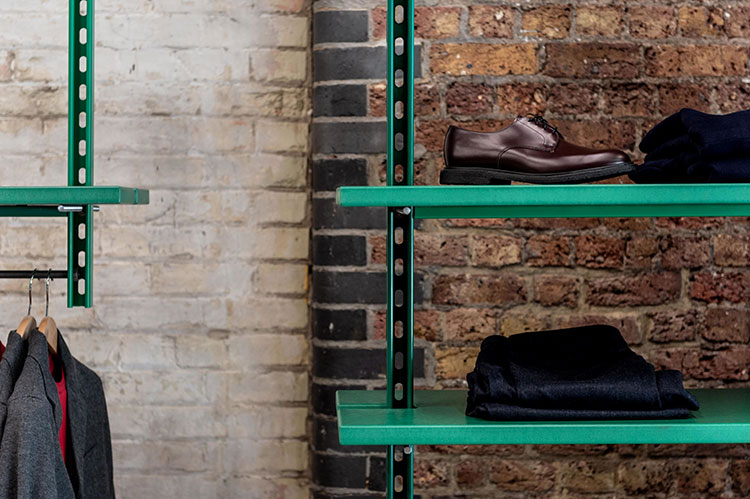 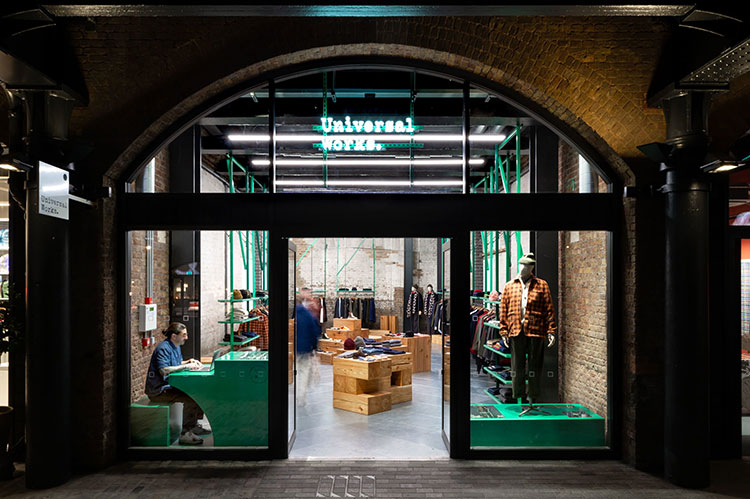